In terms of things giving impetus to the advance of the typewriter, such events of immense national interest as the Military Commission trial of alleged conspirators in the April 14, 1865, assassination of President Abraham Lincoln should not be underestimated. Although early work on the typewriter was still two years away, from 1860 the rapid spread across America of new settlements, small town newspapers and mail and telegraph services can be seen in hindsight as making a machine such as the typewriter an absolute imperative. All of this, of course, was followed by the immediate post-Civil War growth of US Government bureaucracy. But for the general public, an insatiable demand for almost instant news about important events, as shown by widespread interest in the conspiracy trial, would in time come to push into prominence the pioneering work of men such as Benjamin Pitman and Christopher Latham Sholes.
Pitman was the official recorder (that is, stenographer) of the Lincoln assassination conspiracy trial, which opened on May 11, 1865, less than a month after Lincoln's death.

The New York Times, December 30, 1910
Upon the advent of the typewriter in 1874, Pitman's leading Cincinnati disciples, Elias and Margaret Longley, were soon able to capitalise. By 1882 they had established the Cincinnati Shorthand and Type-Writing Institute. Pitman's shorthand had been developed and promoted by Eli Longley, who covered for Cincinnati newspapers major trials and political events. (E.N Miner published Longley's Shorthand and Type-Writing Dictation Exercises in 1890, along with other works.) More importantly, perhaps, the typing skills Margaret Longley had acquired, on first the Remington and then the Caligraph, and passed on through her classes and books, enabled the quick transcription of shorthand on a typewriter. Her part in the growing demand for this machine was quite significant. 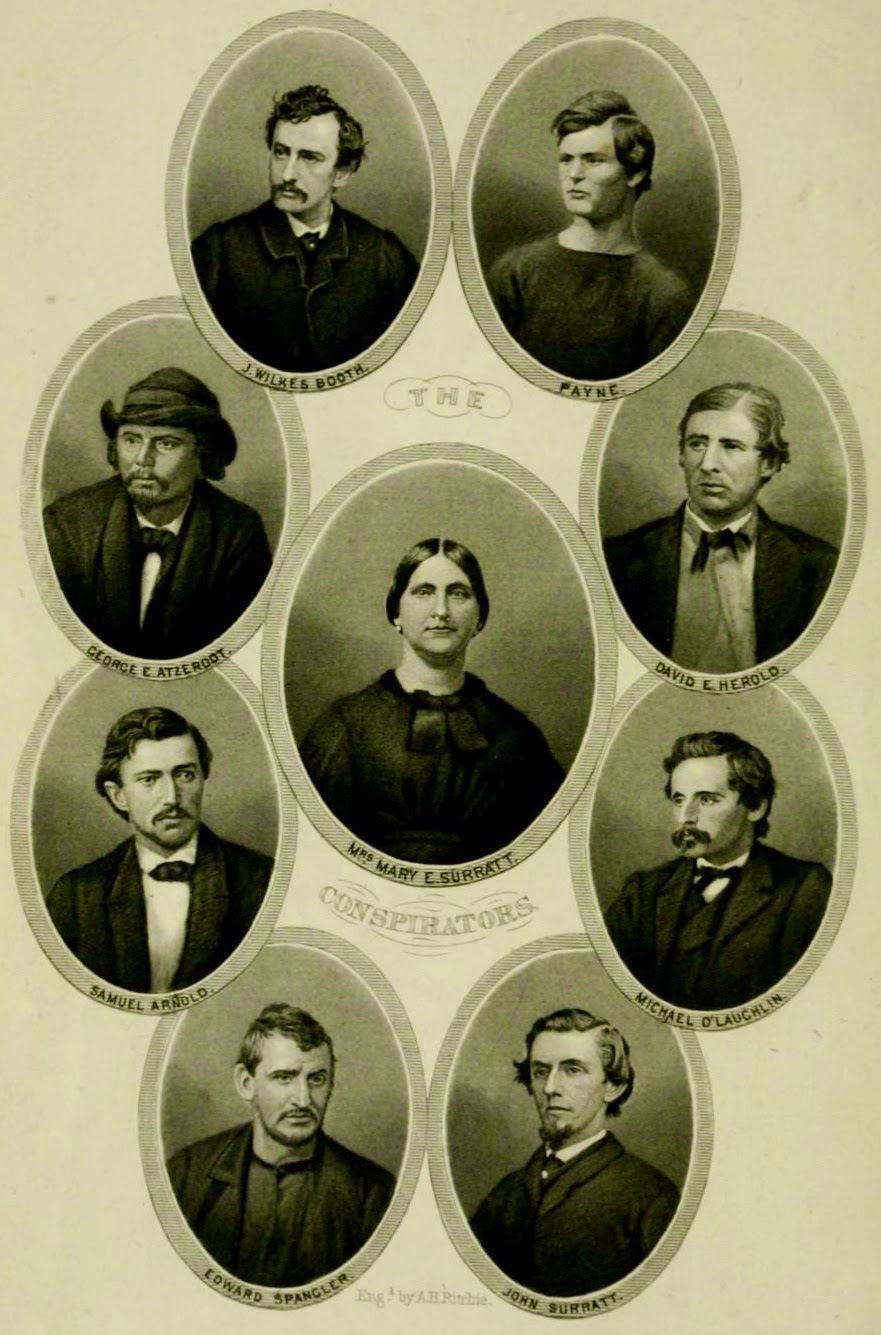 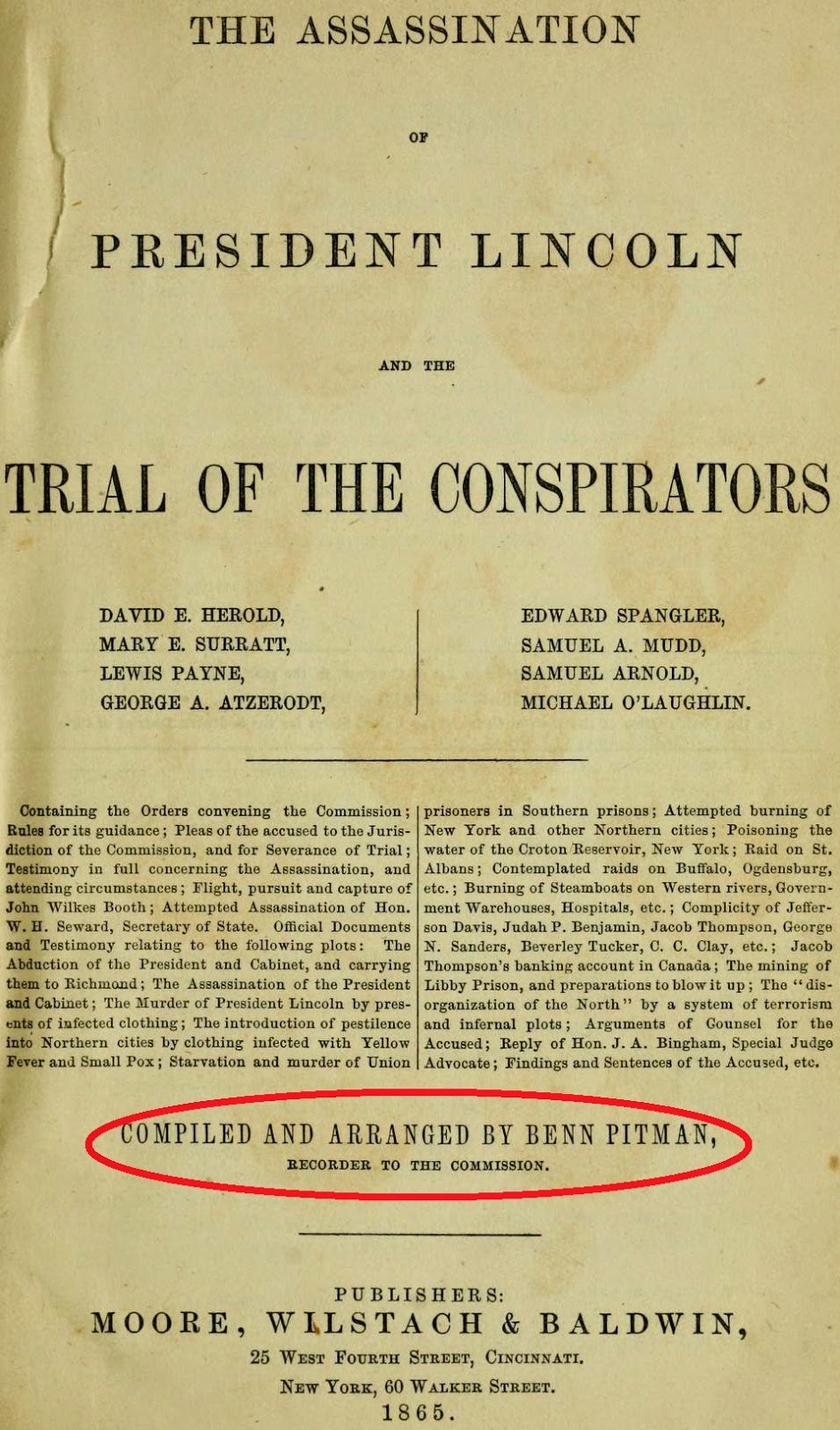 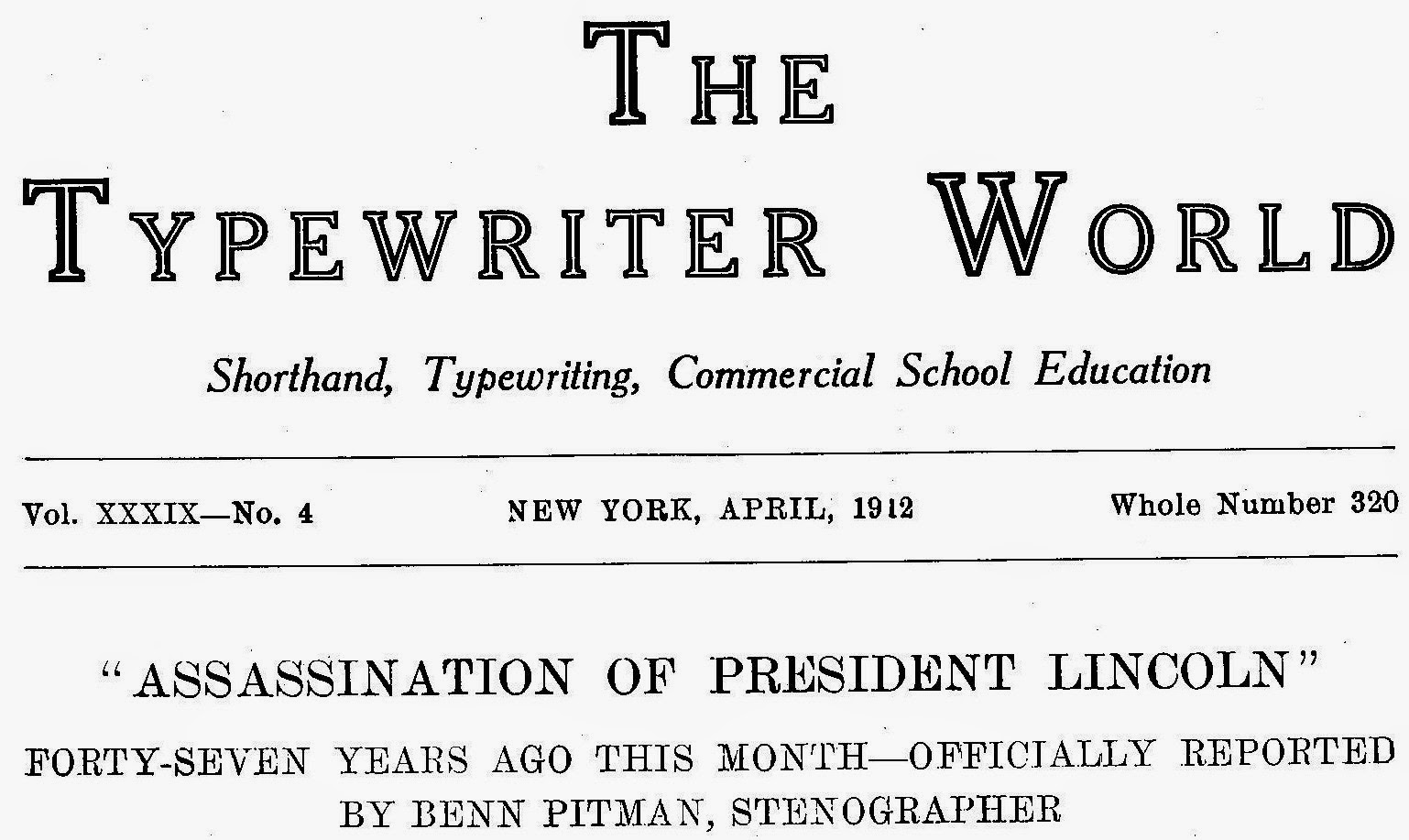 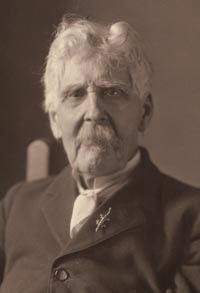 Benn Pitman
The Typewriter World devoted the lead article of its April 1912 issue to a tribute to Benn Pitman (1822-1910) and his groundbreaking coverage of the 1865 Lincoln assassination conspiracy trial.
The story, written by Typewriter World editor Enoch Newton Miner (1854-1923), contained reference to Pitman, just before his death in Cincinnati on December 28, 1910, writing a statement declaring Mary Surratt "innocent of the crime for which she was executed".
According to Miner, Pitman's claim was reported in a dispatch from Cincinnati which appeared in "the New York dailies" in February 1912. The story said Pitman's statement had appeared in a "local [Cincinnati] magazine".
Miner's interest in Pitman's coverage of the trial was aroused on February 12, 1912, by the 103rd anniversary of Lincoln's 1809 birth. Miner "spent nearly all day at home in [my] library. (It is well known to the fraternity that we have one of the largest shorthand libraries in this country.) Remembering the day, we took down from its shelf one of our largest and most treasured volumes ... and soon were buried in its contents."
The 421-page volume, 6 1/2 by 9 1/2 inches, "handsomely bound in half calf", was Pitman's book of the conspiracy trial.
Pitman had been appointed "official recorder" of the trial and 10 days before the Military Commission passed sentences (on June 30, 1865), Pitman wrote to Judge Advocate General Brigadier General Jospeh Holt, telling him Cincinnati publishers Moore, Willstach and Baldwin were willing to produce in "respectable book shape" a record of the proceedings. Pitman pointed to his earlier work, The Indianapolis Treason Trials, and sought Holt's permission to go ahead with the Lincoln assassination conspiracy trial book. This appeared later in 1865. 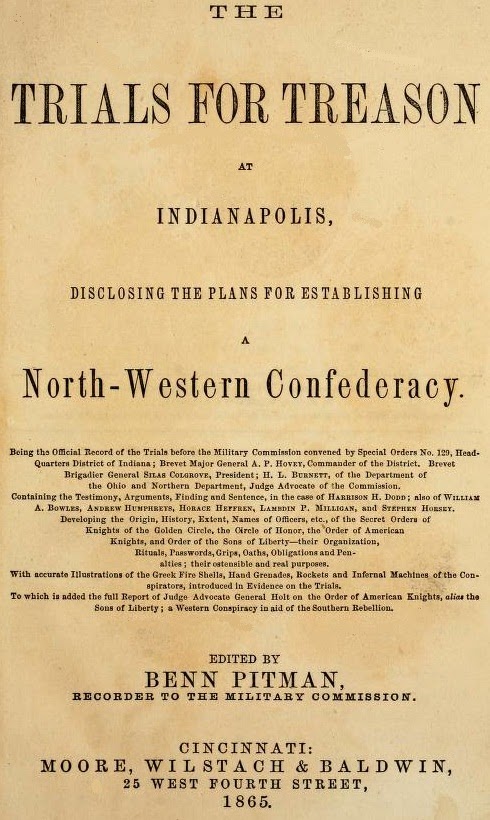 Pitman opened his letter with reference to a need "To satisfy the present public desire". His application was approved and endorsed by 11 of the highest-ranking officers in the US Army. 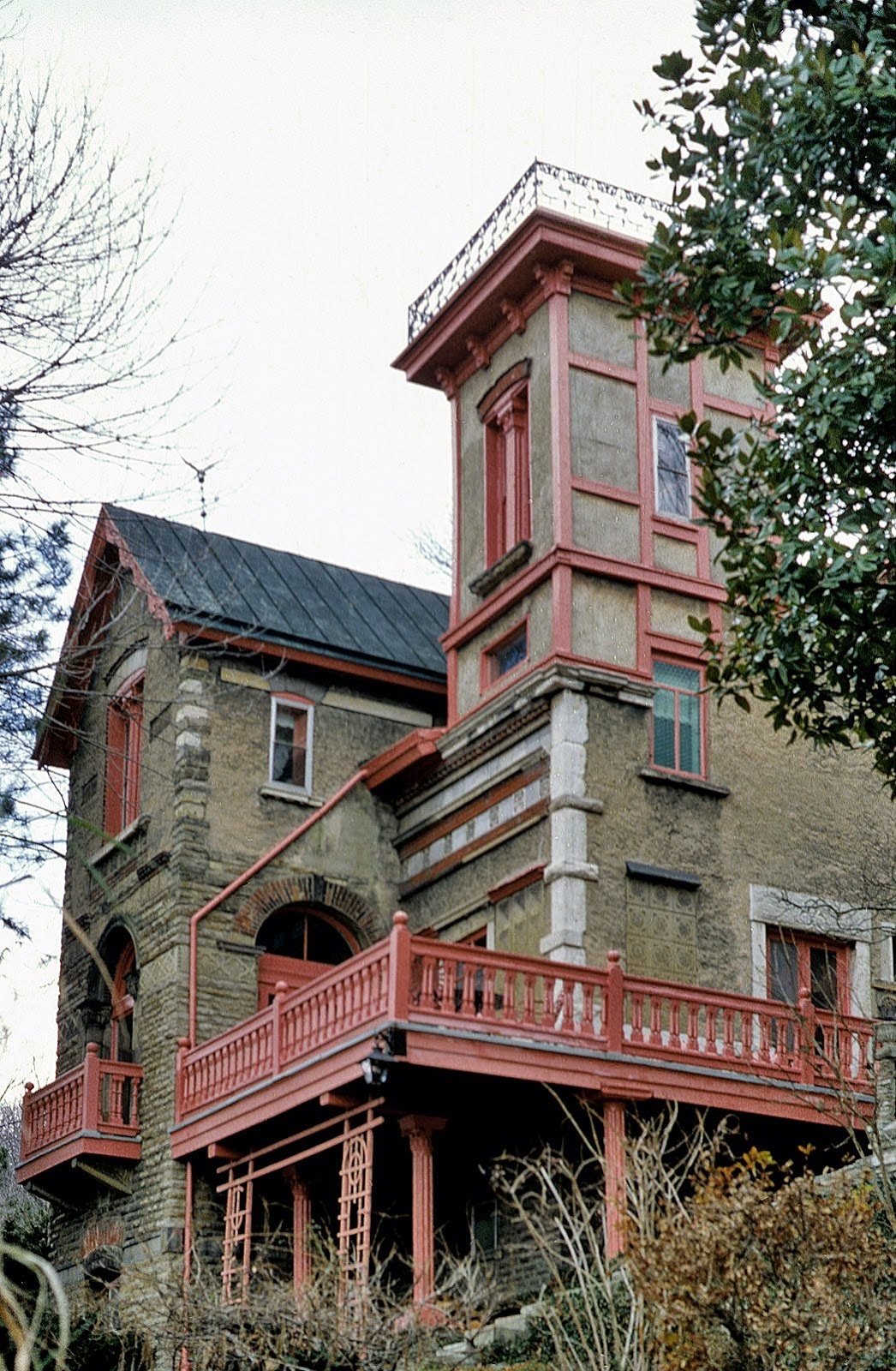 Unfortunately, I can't find online any reference to the 1910 Cincinnati magazine article about Pitman's statement on Surratt's innocence. It is not in The New York Times digital library. There is an interesting post on a site called "Digging Cincinnati History" which contains an obituary for Pitman from the Cincinnati Enquirer of December 29, 1910. But the post is primarily about Pitman's spectacular and heritage-listed house at 1852 Columbia Parkway, East Walnut Hills (above). It does not mention Pitman's "deathbed" defence of Surratt.
However, The War Was You and Me: Civilians in the American Civil War (Princeton University Press, 2002), edited by Joan E. Cashin, mentions just such a Pitman defence, saying it was made soon after Surratt was hanged (on July 7, 1865). I cannot find the cross reference to this quotation:

In a review of Kate Clifford Larson's 2009 book The Assassin's Accomplice: Mary Surratt and the Plot to Kill Abraham Lincoln, Elizabeth D. Leopold began, "The degree of Mary Surratt's complicity in the plot to kill President Abraham Lincoln has been a matter of considerable debate since April 14, 1865." 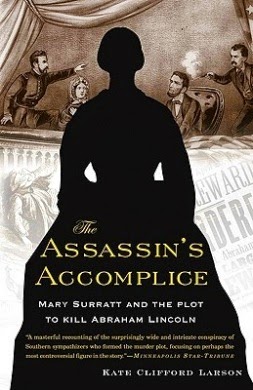 Leopold's review, in The Journal of Military History,  said that in Larson's "estimation Surratt was, unequivocally, 'guilty', for she was the woman who 'nurtured and helped cultivate the conspiracy to kill' Lincoln".
Leopold wrote, " ... with regard to primary sources, I would argue that Larson has relied much too heavily (and without any explicit interrogation of their value) on too few items ... In terms of the actual trial testimony, Larson has depended on recorder Benn Pitman's version, which is indeed useful but not without significant flaws Larson should consider and mention: Pitman, for example, summarized, paraphrased, and reorganized much of what he heard in court, rather than writing out the testimony verbatim in chronological question and answer form. In addition, Pitman's version amounted to the Federal government's 'official' account, and thus inevitably reflected the prosecution's biases."
These comments seem to be at complete odds with Pitman's subsequent defence of Surratt, which is not mentioned.
Posted by Robert Messenger at 13:07