The Corona 3 Portable Typewriter: Gentle to a Child's Touch, but Tougher than the Toughest Marine, Tougher than a Banderillero 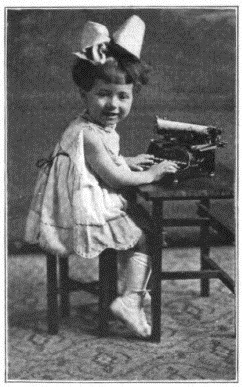 Three-year-old Alberta Cardinal types on her Corona 3 portable typewriter in 1922. Alberta was the daughter of Queens, New York, factory machinist, printer and painter Albert Cardinal and his wife Helen. The Corona 3 was bought from the Queens Typewriter Company at 430 Jackson Avenue, Long Island City. According to Typewriter Topics, little Alberta could type "really well". All I know of what became of Alberta is that she was still living with her parents in Queens in 1940, and was a sales clerk for a jewelry retailer.
In October 1922, just eight months after the death of its president and founder Benn Conger, the Corona Typewriter Company of Groton, New York, launched a "new" improved Corona 3. This revamp was no doubt in response to the arrival on the market in October 1920 of the Remington portable and to renewed, heavy marketing of the Underwood 3, which had been launched in 1919. Four-bank Corona and Underwood portables were still four years away. 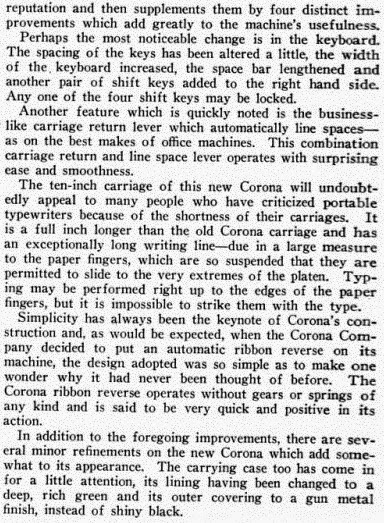 The arrival of the improved Corona 3 was accompanied by a vigorous marketing campaign, which included all sorts of stunts by agents across the world. As well, notable among full-page advertisements taken out by Corona in Typewriter Topics were stories from Corona 3 users which emphasised the toughness and durability of the little machine. (Bearing mind this was a year before Firpo knocked Jack Dempsey on to a Corona 3 at the Polo Grounds, covered elsewhere on this blog.) Some of these adverts have been posted earlier, but this one particularly took my fancy: 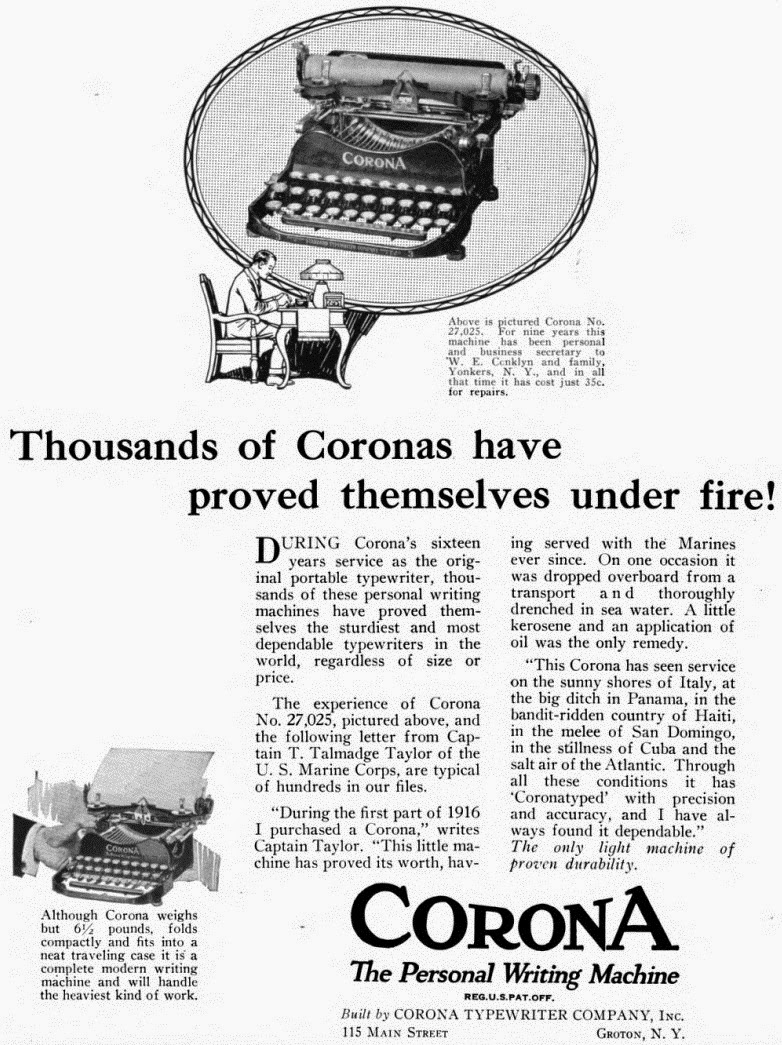 Thad Talmadge Taylor,  born at Taylor Ridge, Rock Island, Illinois, on September 15, 1892, was one tough tottin' Great Dane-lovin' US Marine - he was known as "Tough Tommy Taylor". And for him to describe the Corona 3 as "dependable" was really saying something:

1944
Major Taylor once took delight in telling a San Francisco police luncheon (yes, people were eating at the time) about how he was able to identify a friend by his teeth after the Marines captain "was blown to pieces in an explosion". That same year, 1936, Taylor told incoming marine Charles Hanson, 20, that he wasn't acceptable because he had a naked lady tattooed on his right arm. Hanson had to go back to the tattooist and have an ankle-length dress drawn on the offending young lady.
Tough Tommy drove home drunk one night in the summer of 1940 and caused a car crash on the Carson Highway in Reno which almost killed him and five other unfortunate road users, including a 12-year-old boy. Not so tough, eh? All he got was a 30-day suspension of his license. Anyway, Taylor, who had enlisted in 1912, survived a fractured skull in the collision he caused and then a bush fire at his ranch in 1941 to be recalled to the Marines in 1942, after three years' retirement. Taylor died on July 11, 1945. 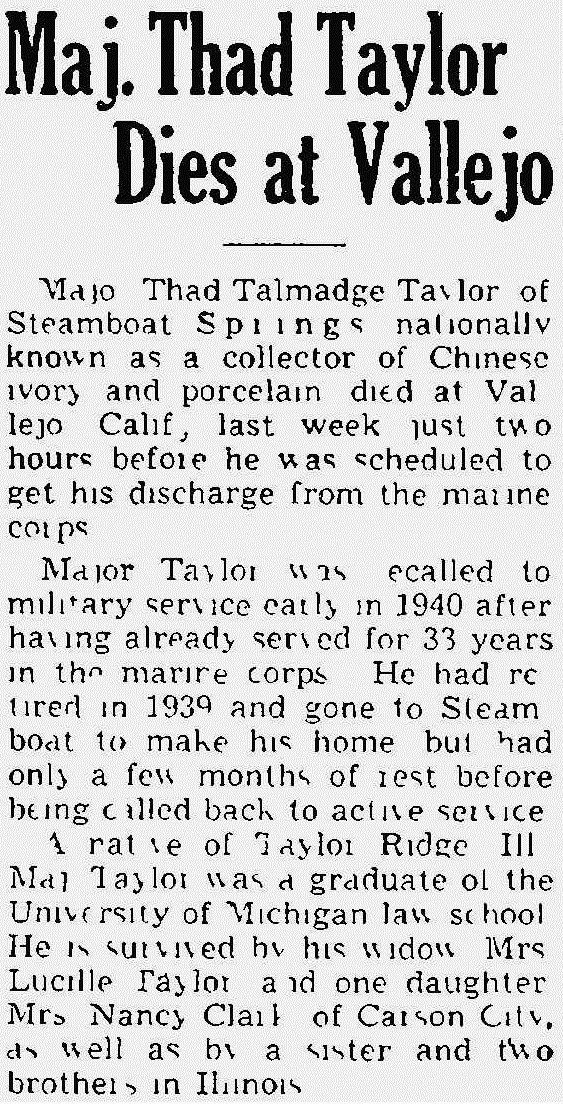 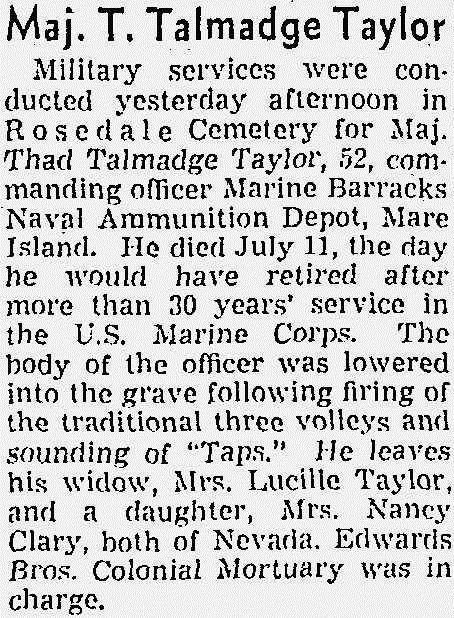 Other stories about the sturdiness of the Corona 3 appeared in Typewriter Topics in 1922: 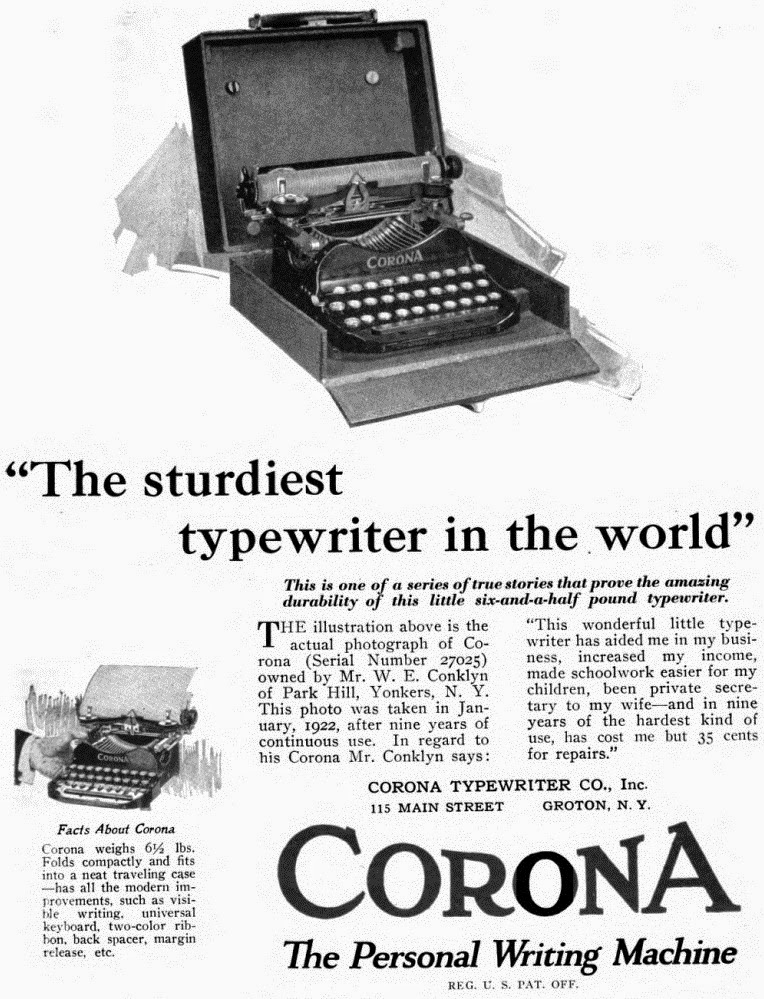 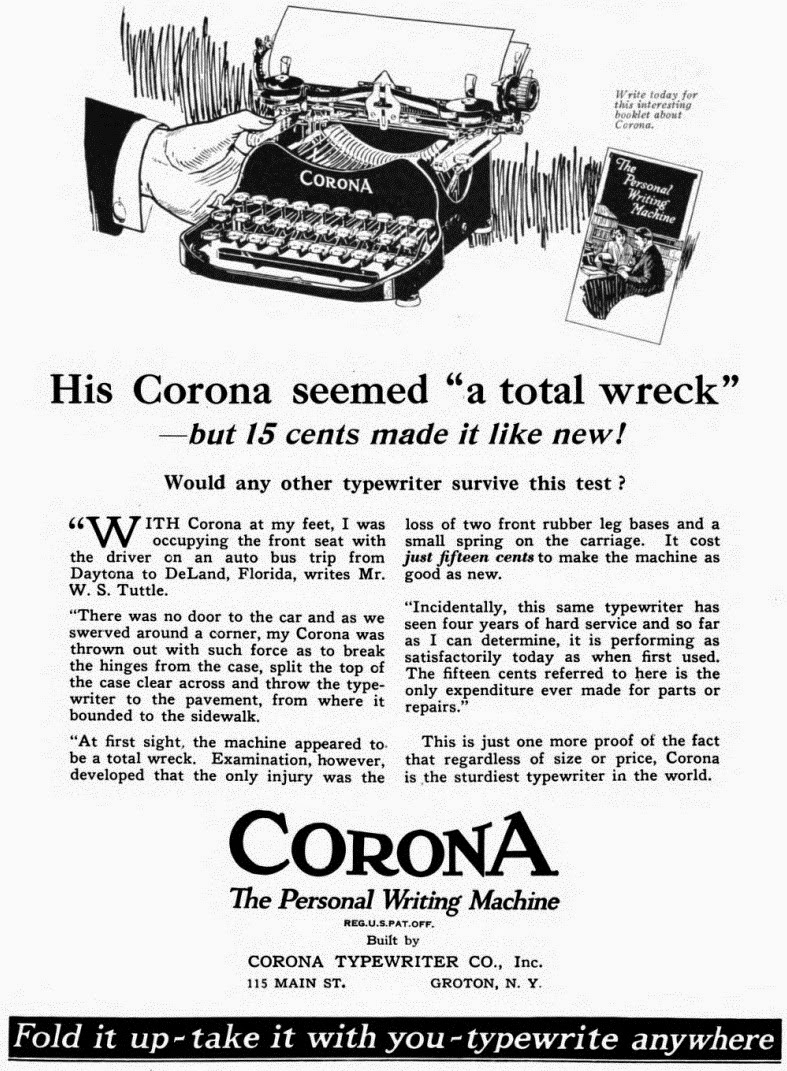 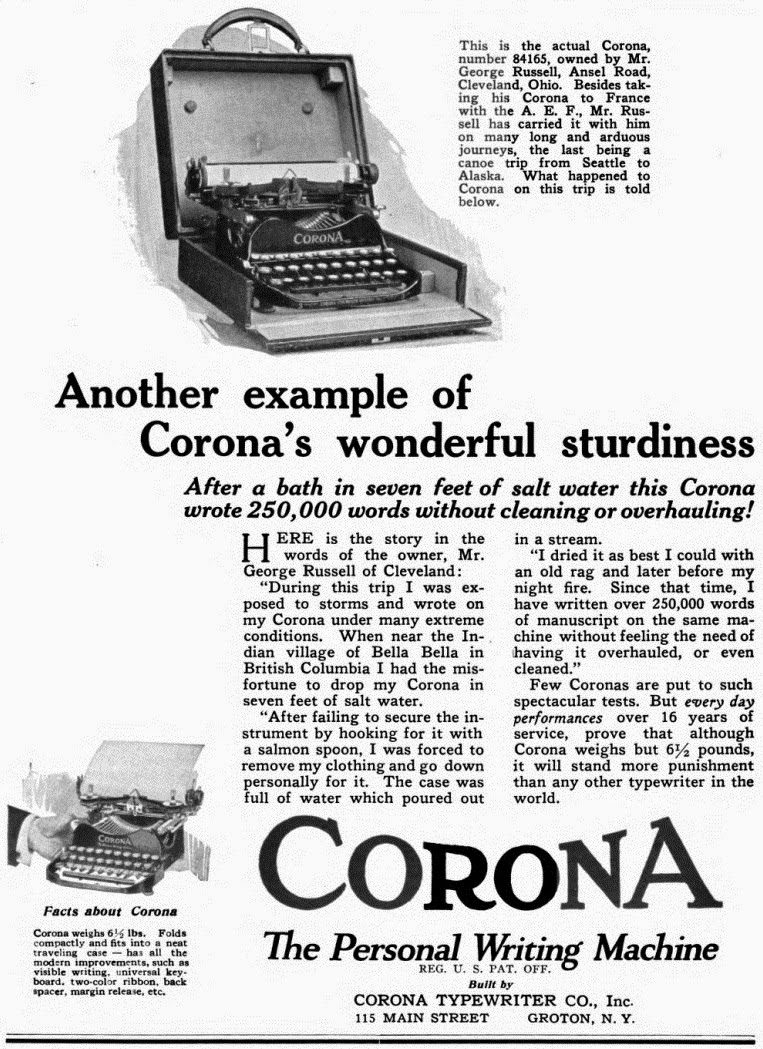 Another favourite for me was the tale of the Corona 3 and the banderillero. I think the line is, "Only the Corona knows the secret behind the triumph of Sánchez Mejías": 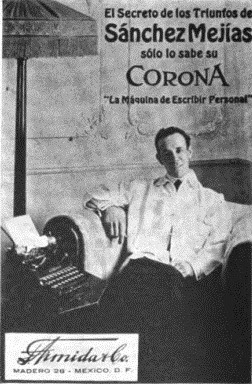 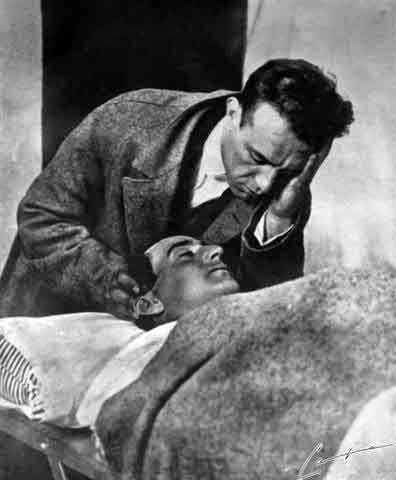 In this famous photo by José Vázquez Demaria, Sánchez Mejías mourns his friend Joselito in the infirmary of the bullring in Talavera de la Reina (Toledo) on May 16, 1920.
Sánchez Mejías' childhood friend was José Gómez, later called Joselito, the greatest bullfighter of all time. At 17 Sánchez Mejías stowed away to New York, where he mistaken for an anarchist. His brother Aurelio got him to Mexico, where he made his debut in the ring as a banderillero in Morelia in 1910. He later returned to Spain
As a writer Sánchez Mejías produced several theatre works, including Sinrazón. He was also a movie actor, a polo player, an auto-racer, a novelist and a poet. 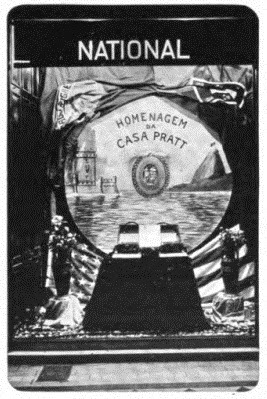 Another Corona 3 news item in 1922 came with the Trans-Atlantic flight from Portugal to Brazil of Portuguese aviators Artur de Sacadura Freire Cabral and Carlos Viegas Gago Coutinho. The pilots were presented with Corona 3s (seen in the window display above) to mark their achievement. 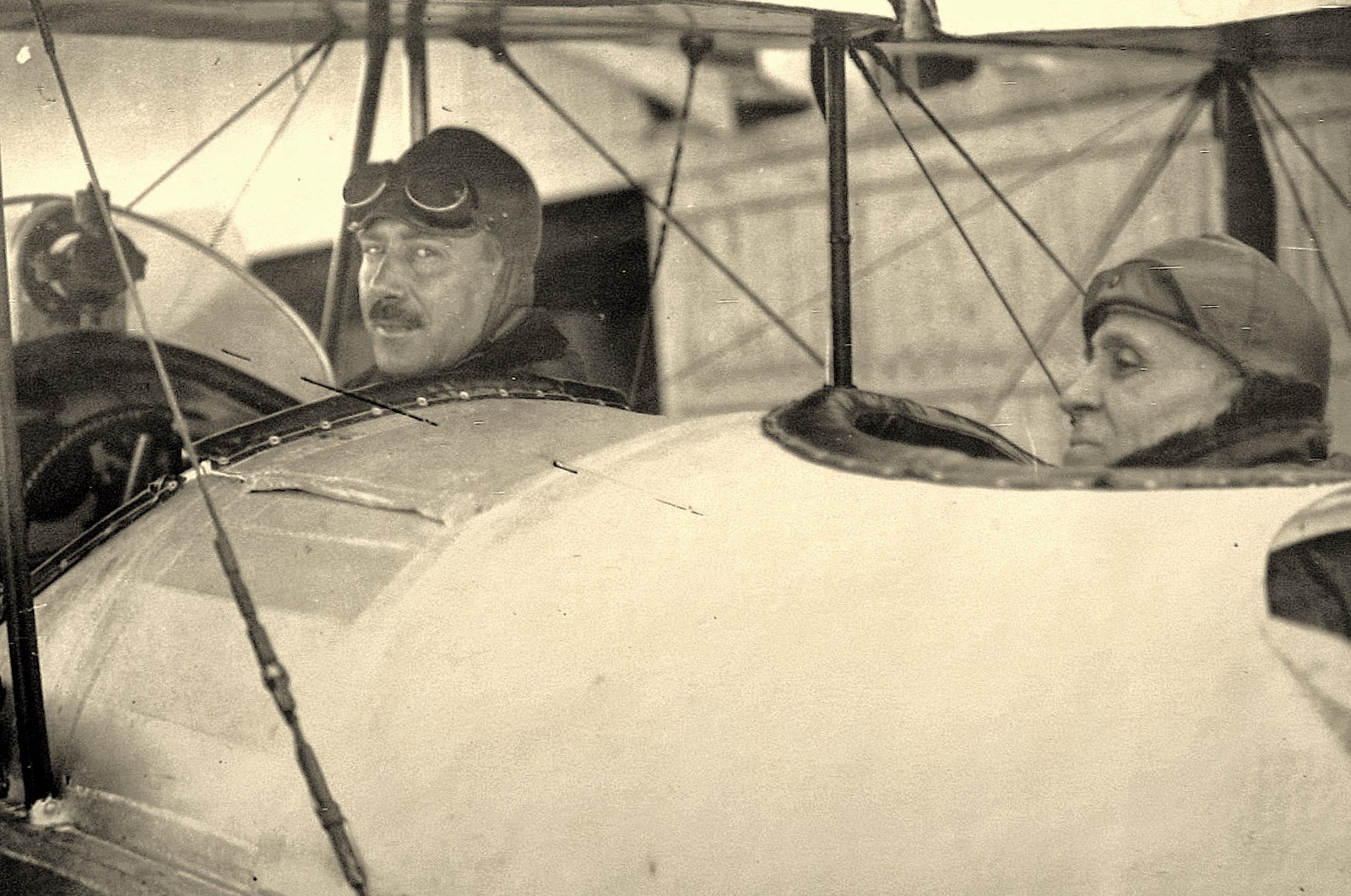 Any room for a couple of Corona 3s, Artur? (Artur is left in this shot.)
How about this neat trick to pull in Corona 3 customers in Manchester, England: 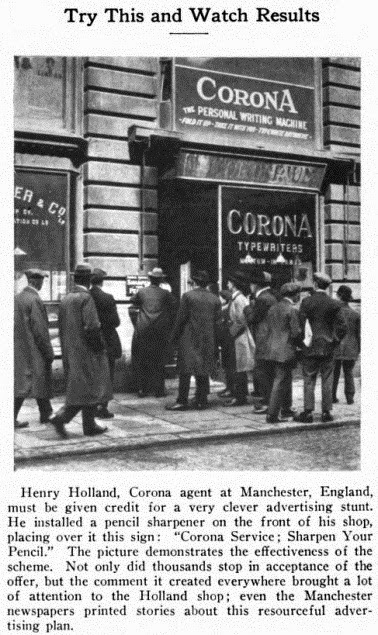 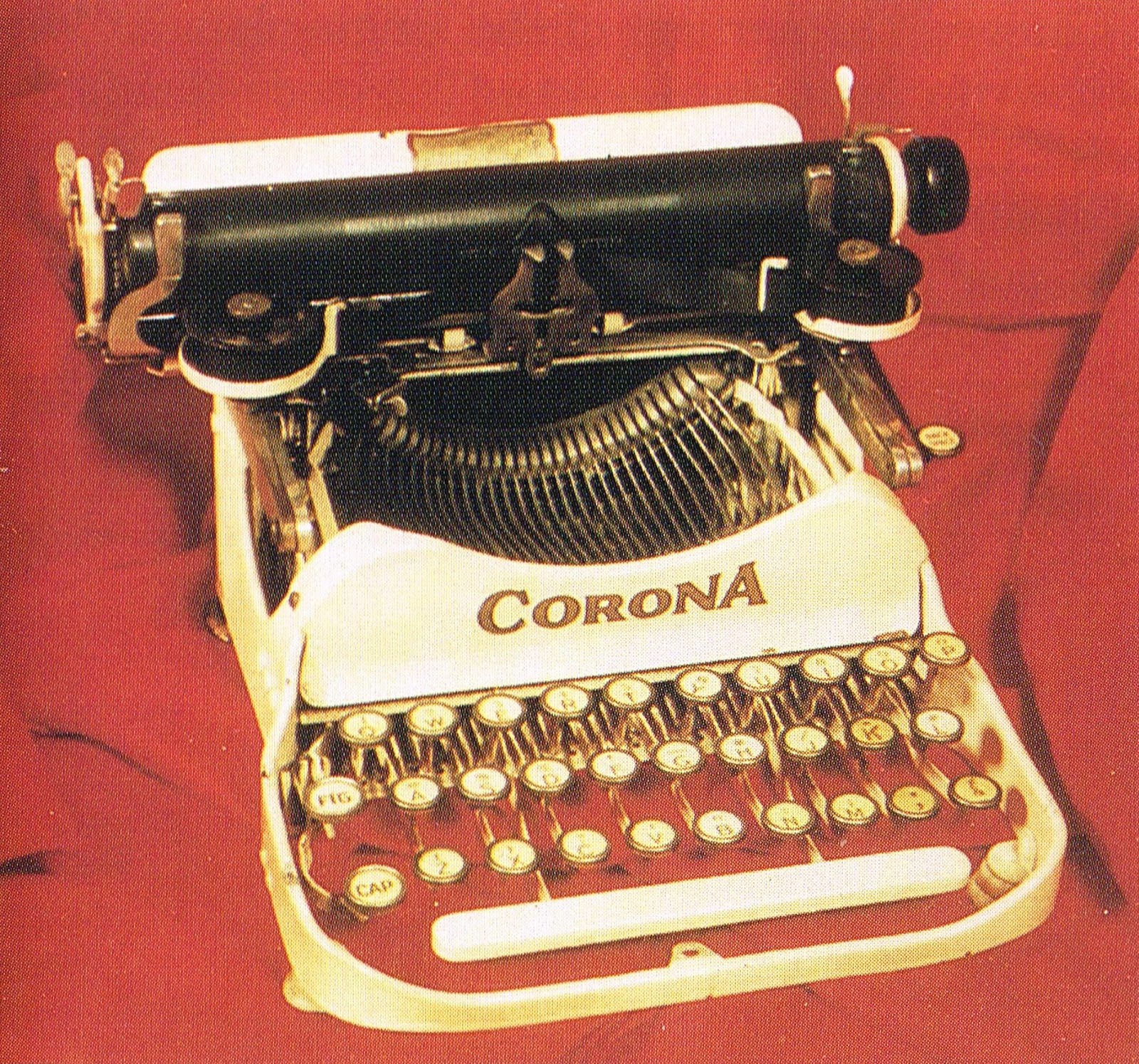 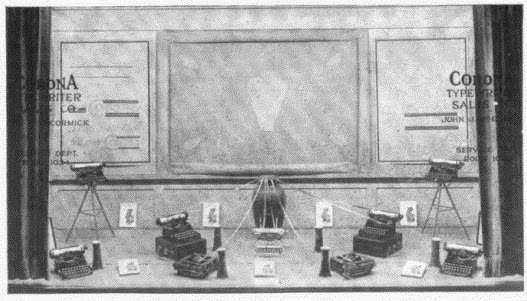 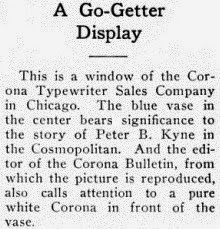 Peter Bernard Kyne (1880-1957) was a San Francisco novelist. Many of his works were adapted into screenplays,  starting in the silent era, particularly his first novel, The Three Godfathers. He was credited in 110 films between 1914 and 1952. The Typewriter Topics heading here, and the reference to a vase, is in connection with Kyne's most famous work, The Go-Getter: A Story That Tells You How to Be One, first published by William Randolph Hearst in 1921. The story centres around disabled World War I veteran Bill Peck, a worker who must overcome many obstacles in order to build a successful life for himself. At every turn he is thwarted by life's circumstances and must rely on his own tenacity and wits to see him through. Bill is given a final test, to "deliver the blue vase." Bill shows his resourcefulness and refusal to quit in fulfilling this quest.
I hate to spoil a good yard, but despite Corona's tribute, Kyne was actually nailed solid to Remington portables: 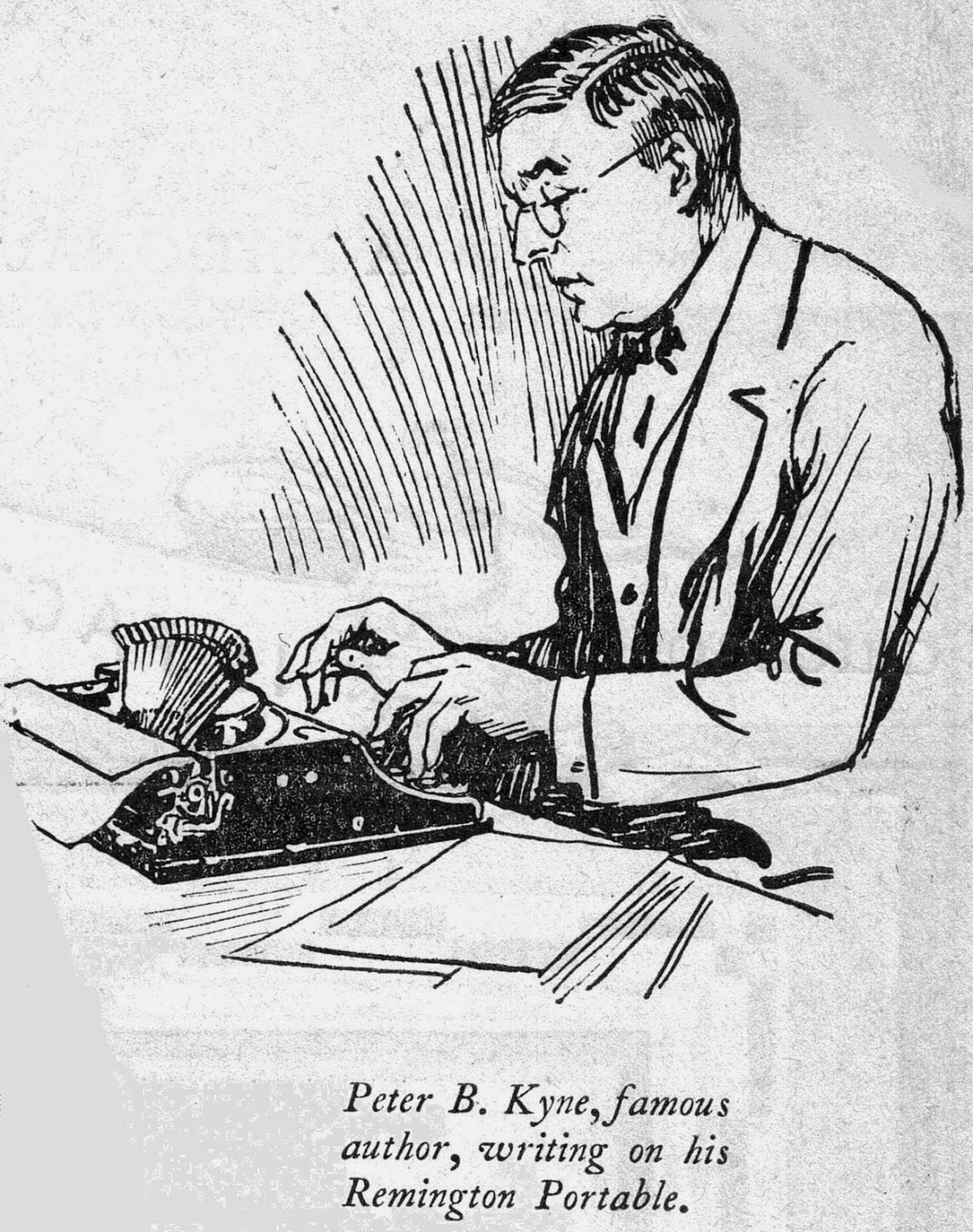 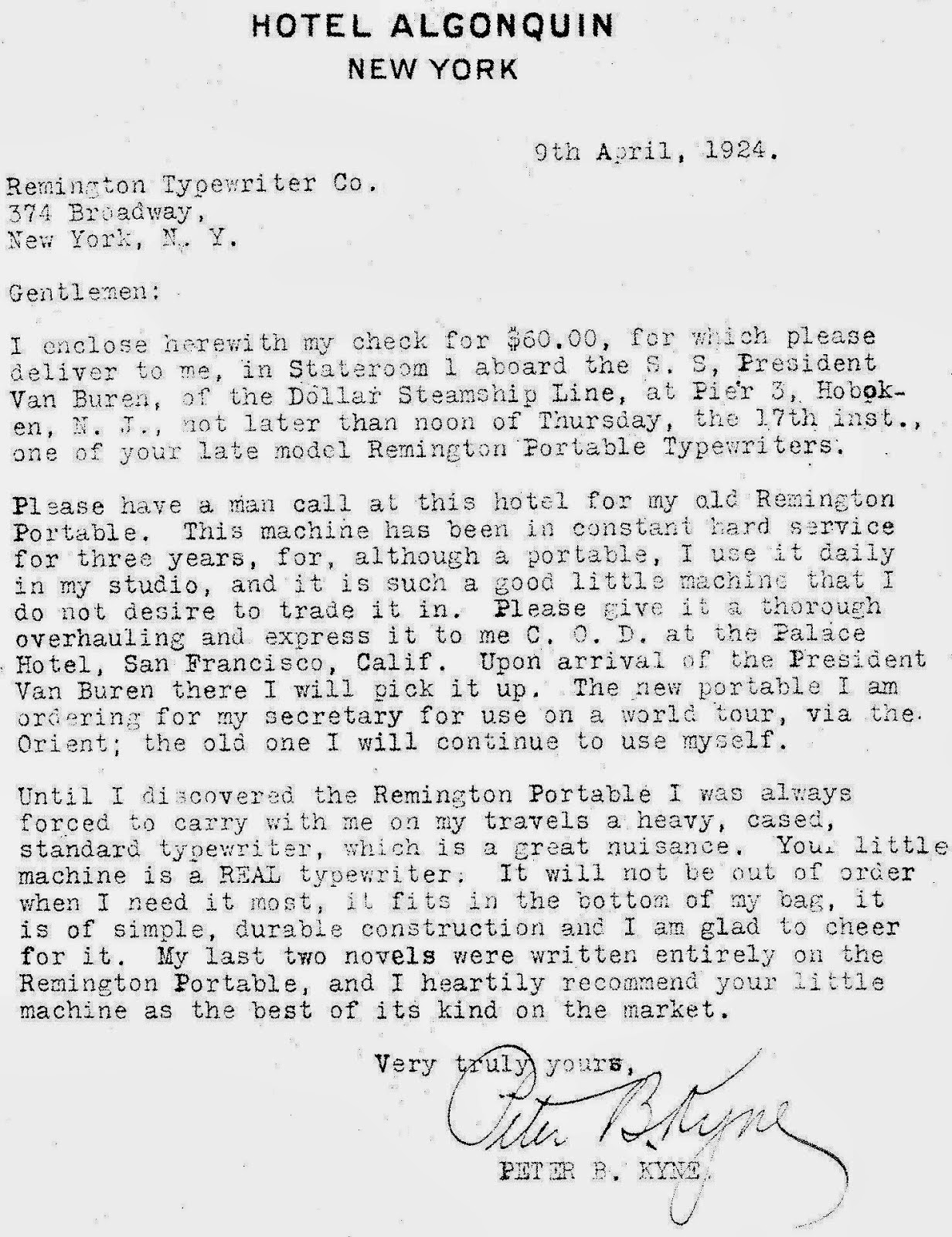 But here's another clever Corona 3 stunt, this time from Milan, Italy: 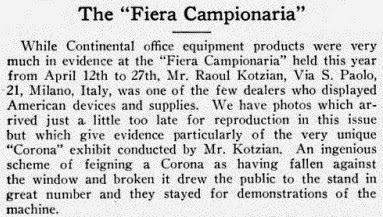 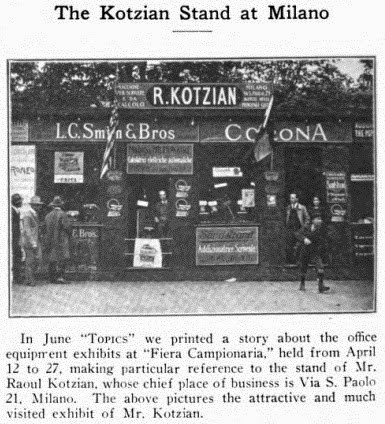 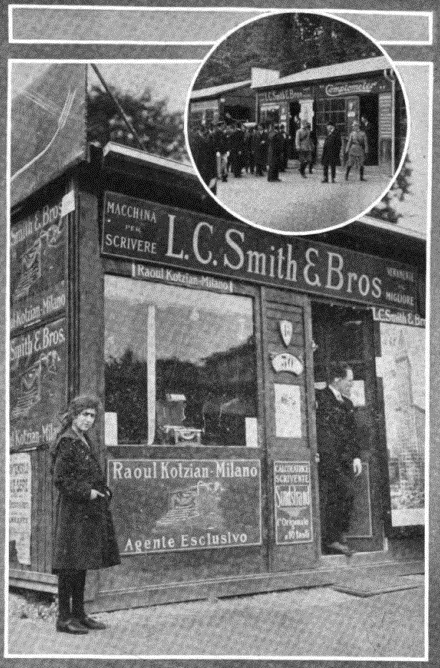 The insert shows the "Crown Prince of Italy" (Umberto II?) and his staff visiting the exhibit. Appropriate, I suppose, for a crown prince to want a Corona.
Denmark, where there are still crown princes (one is married to a Tasmanian), also got a mention: 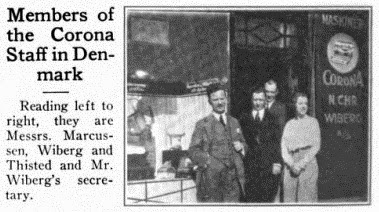 Finally, back home for Christmas in the good old' US of A: 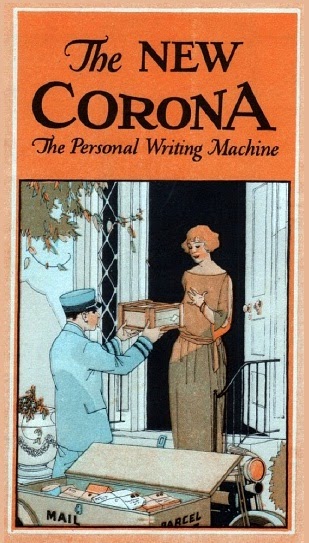 Posted by Robert Messenger at 13:24

I have never perceived Coronas as particularly durable and reliable, but then one must take into account that by now they're nonagenarians (more or less) and time has taken its toll.