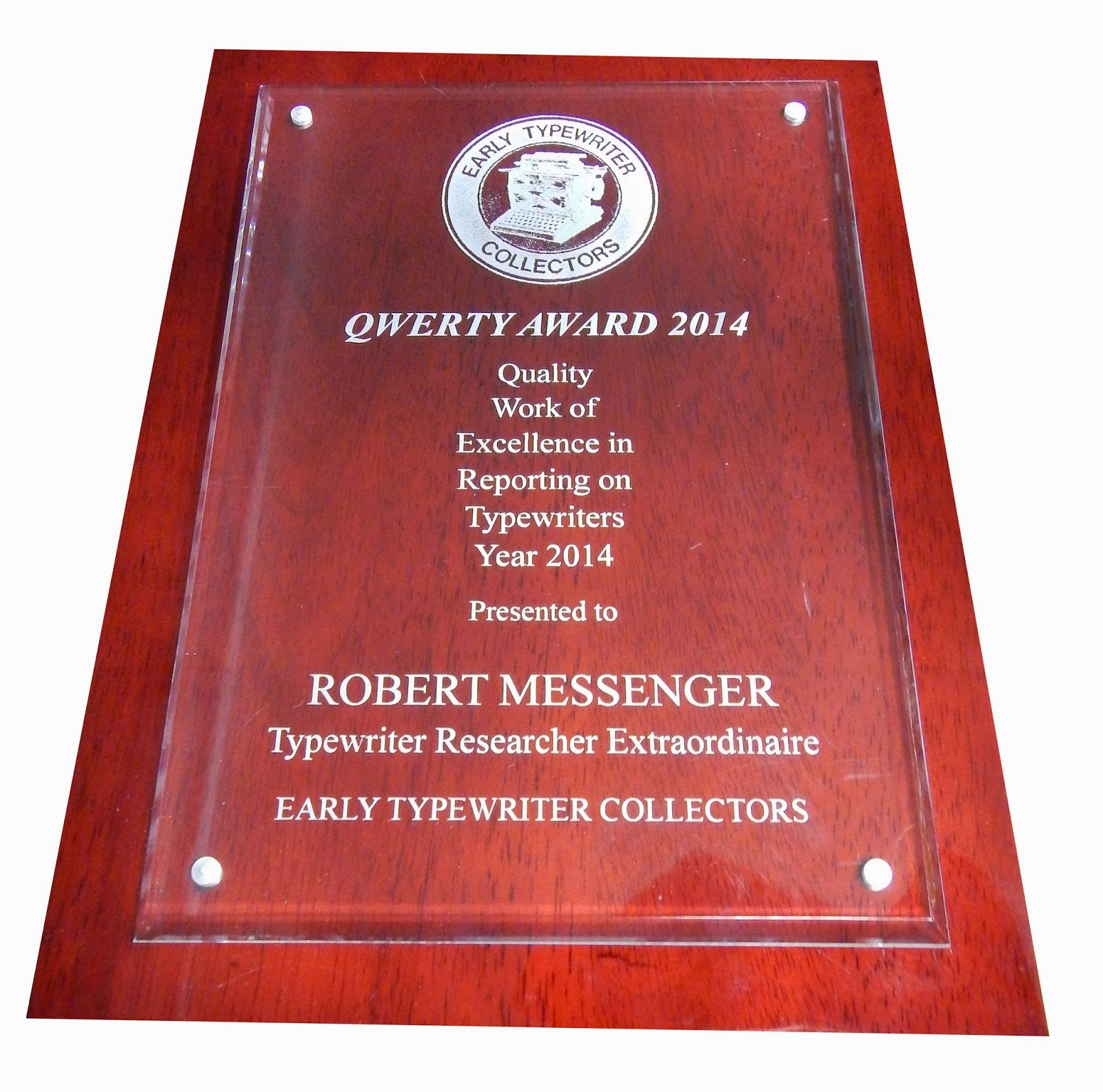 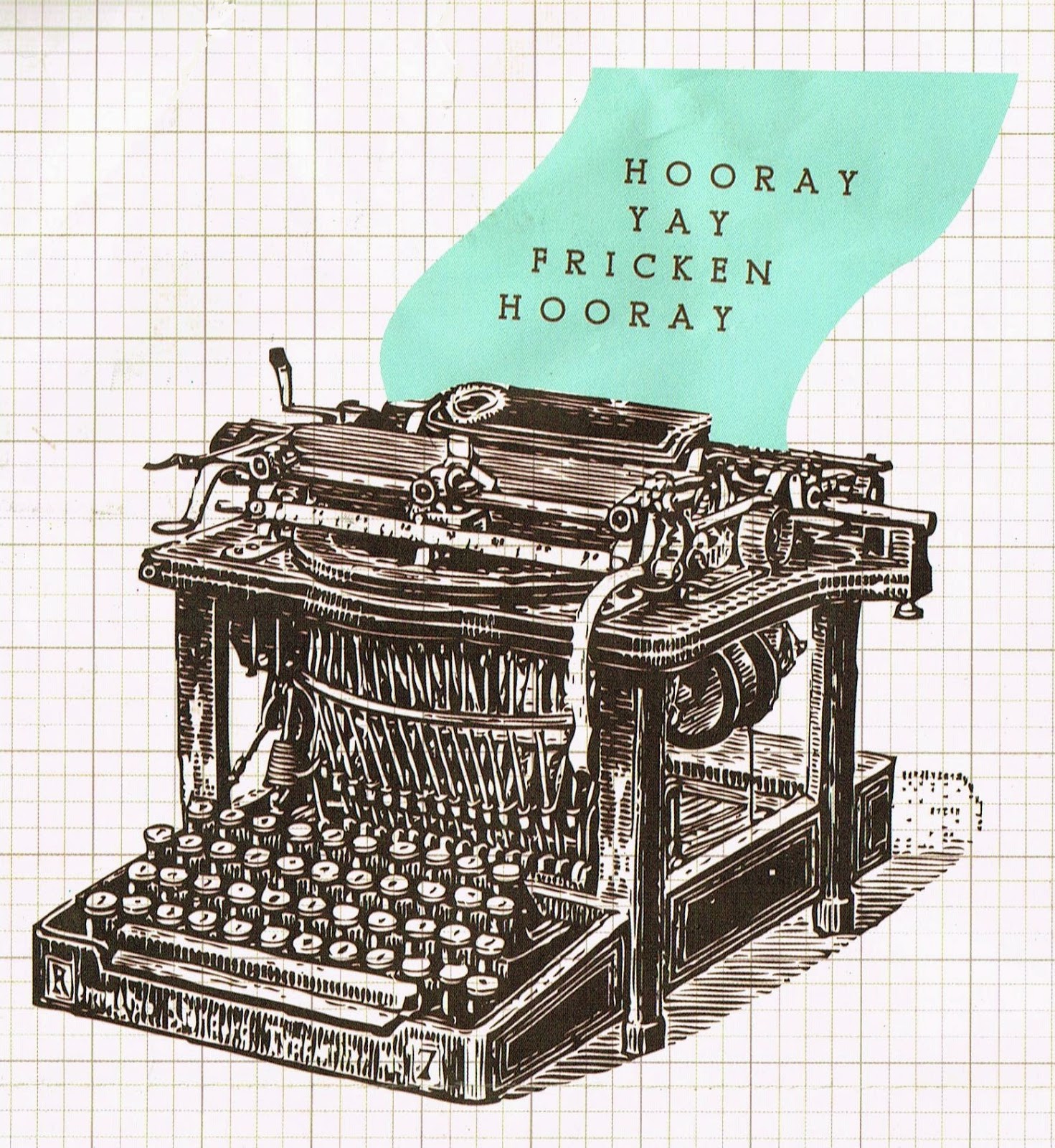 Shouts of "Hooray" did echo through the once hallowed and now empty halls of the Australian Typewriter Museum. That aside, I felt, in equal measure, thrilled, honoured and humbled to receive word from the US on the weekend that I was one of two people to have QWERTY Awards bestowed upon us at the typewriter collectors' gathering at Herman Price's Chestnut Ridge Typewriter Museum in Fairmont, West Virginia. The other 2014 winner is long-standing Typewriter Exchange editor and publisher Michael A.Brown, of Philadelphia. My heartiest congratulations to Mike. 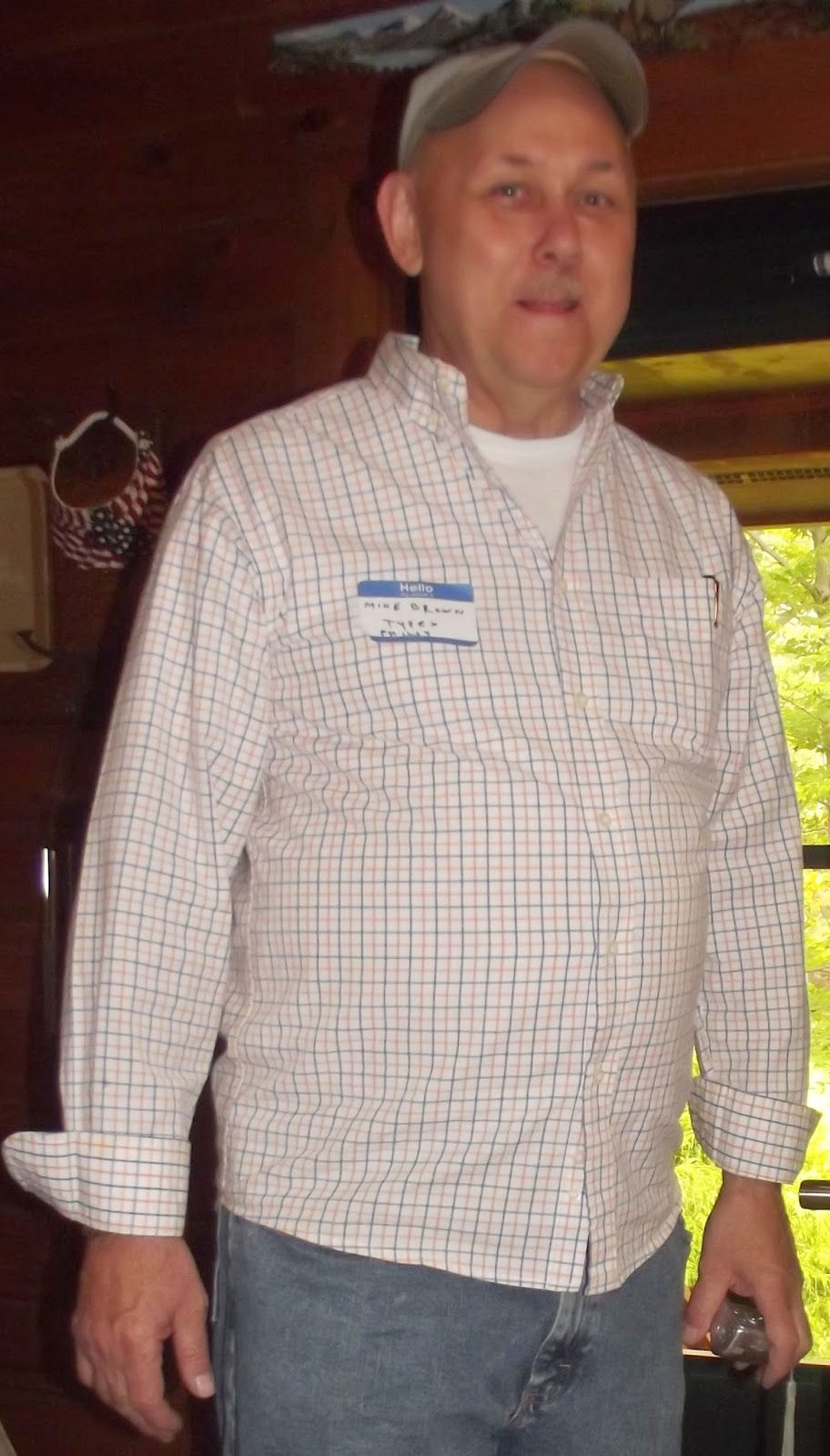 Mike Brown
Unfortunately, neither Mike nor myself were able to be in West Virginia for the gathering  this year. The awards were presented by Peter Weil and Martin Rice, with Herman Price receiving them on our behalf. Previous winners have been Richard Polt in 2012 and Peter Weil last year: 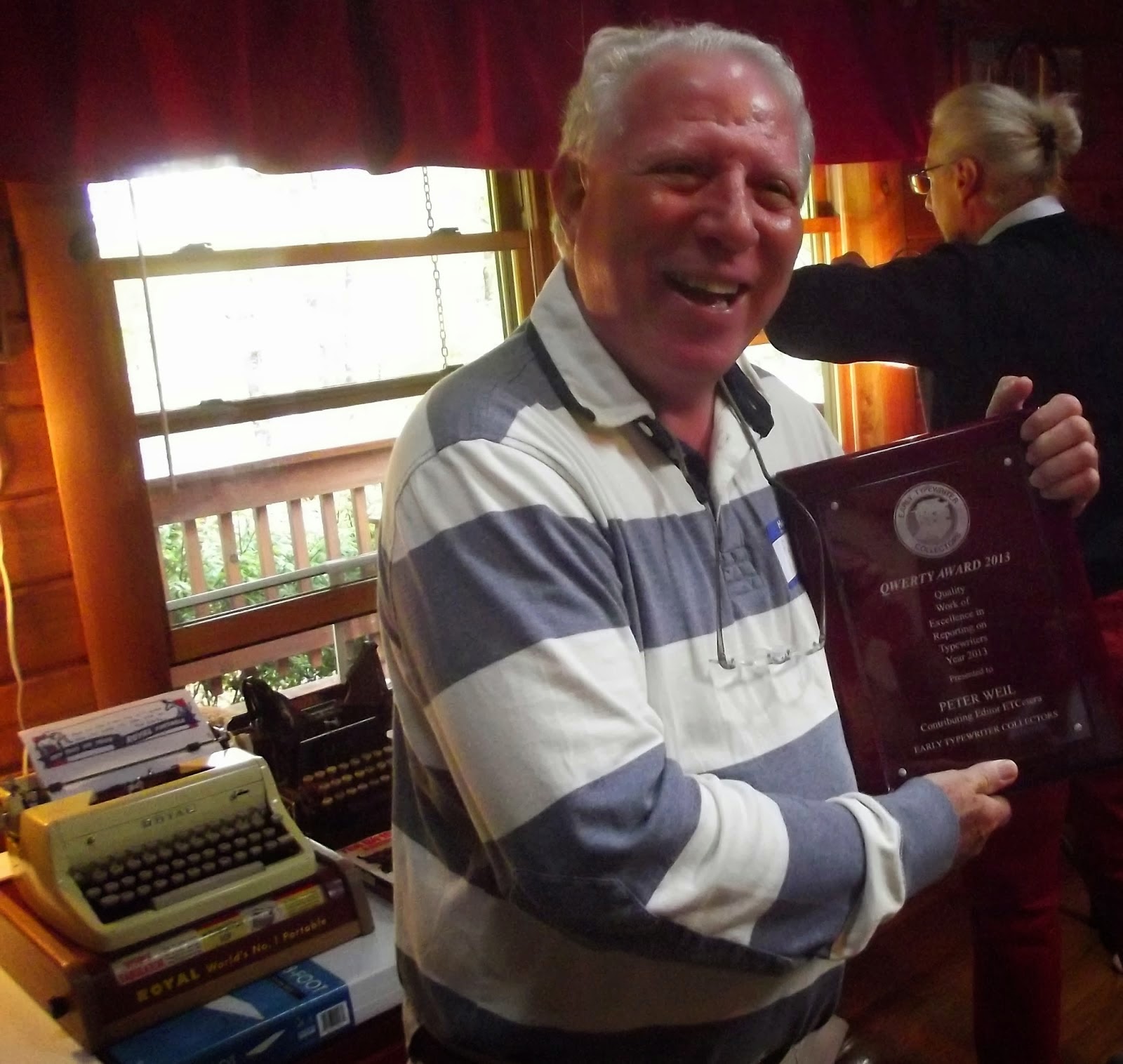 Peter Weil with the 2013 QWERTY Award 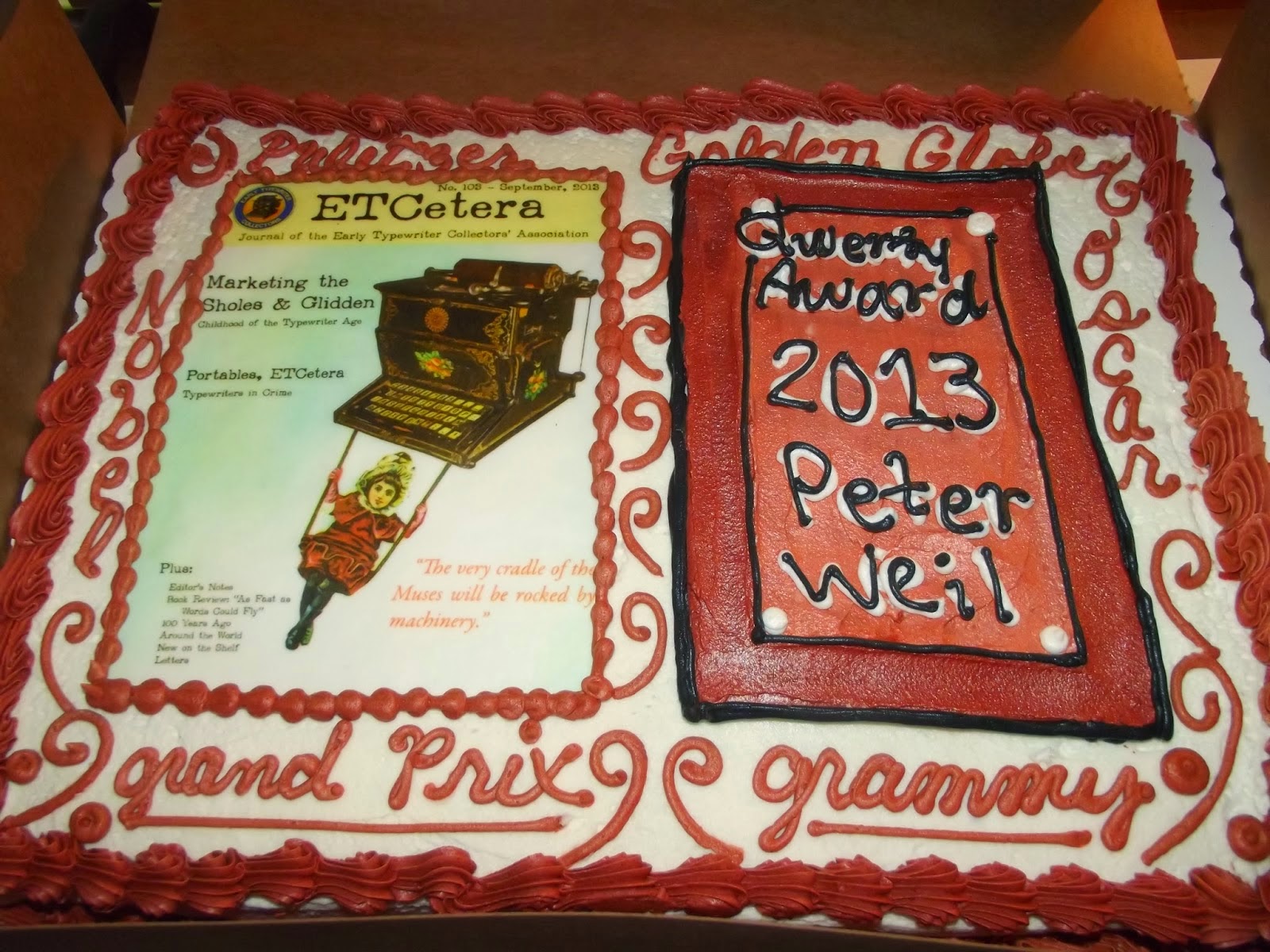 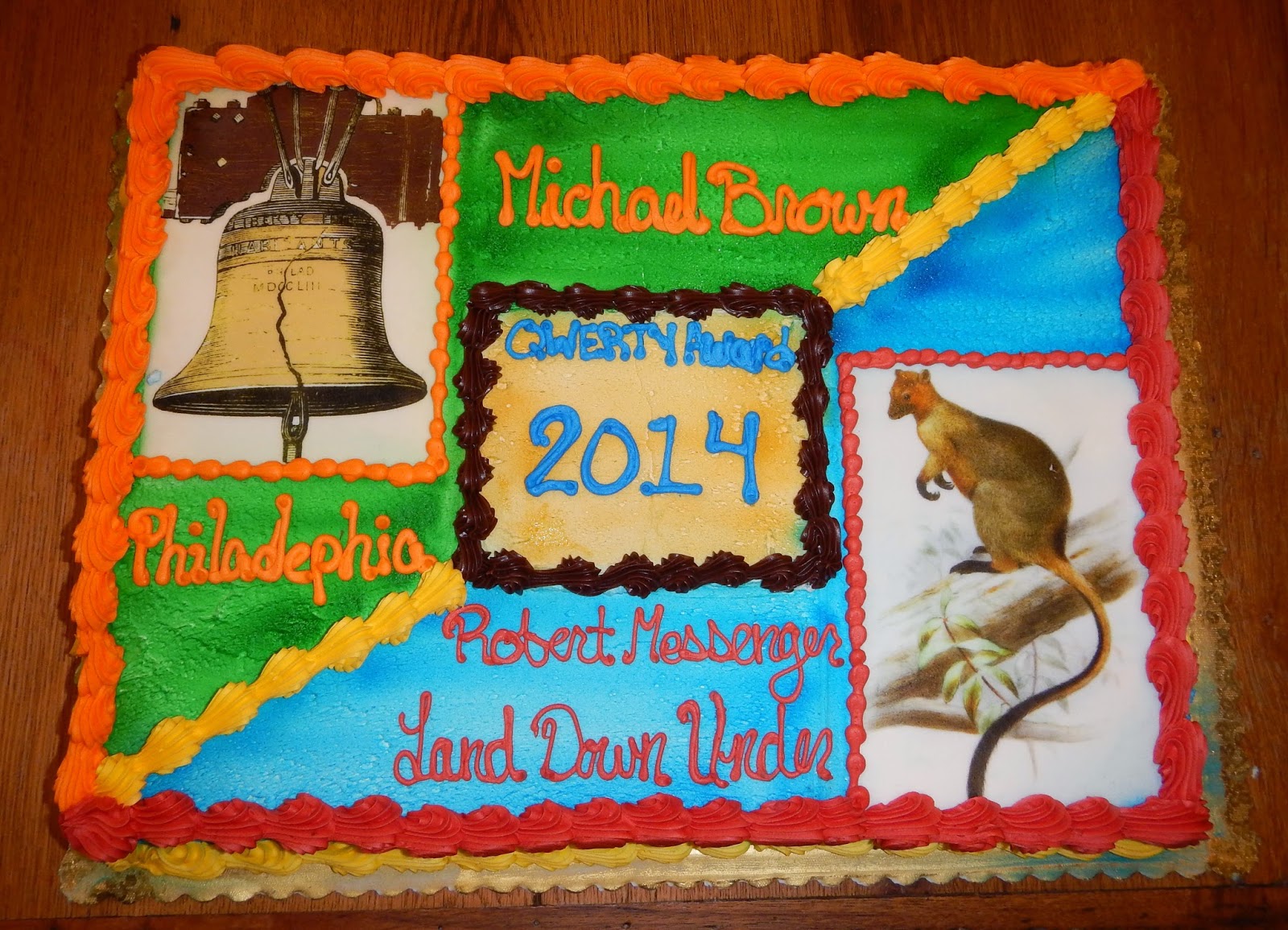 My half of the now traditional QWERTY Award cake was "Devil's food", but happily Herman put a wallaby on it, not a Tasmanian Devil. Still, he dressed up as my long-time mate "Beelzebub", to receive the award on my behalf from Peter Weil. Devil take the hindmost? As Peter remarked, "Go to Hell, Bub!" 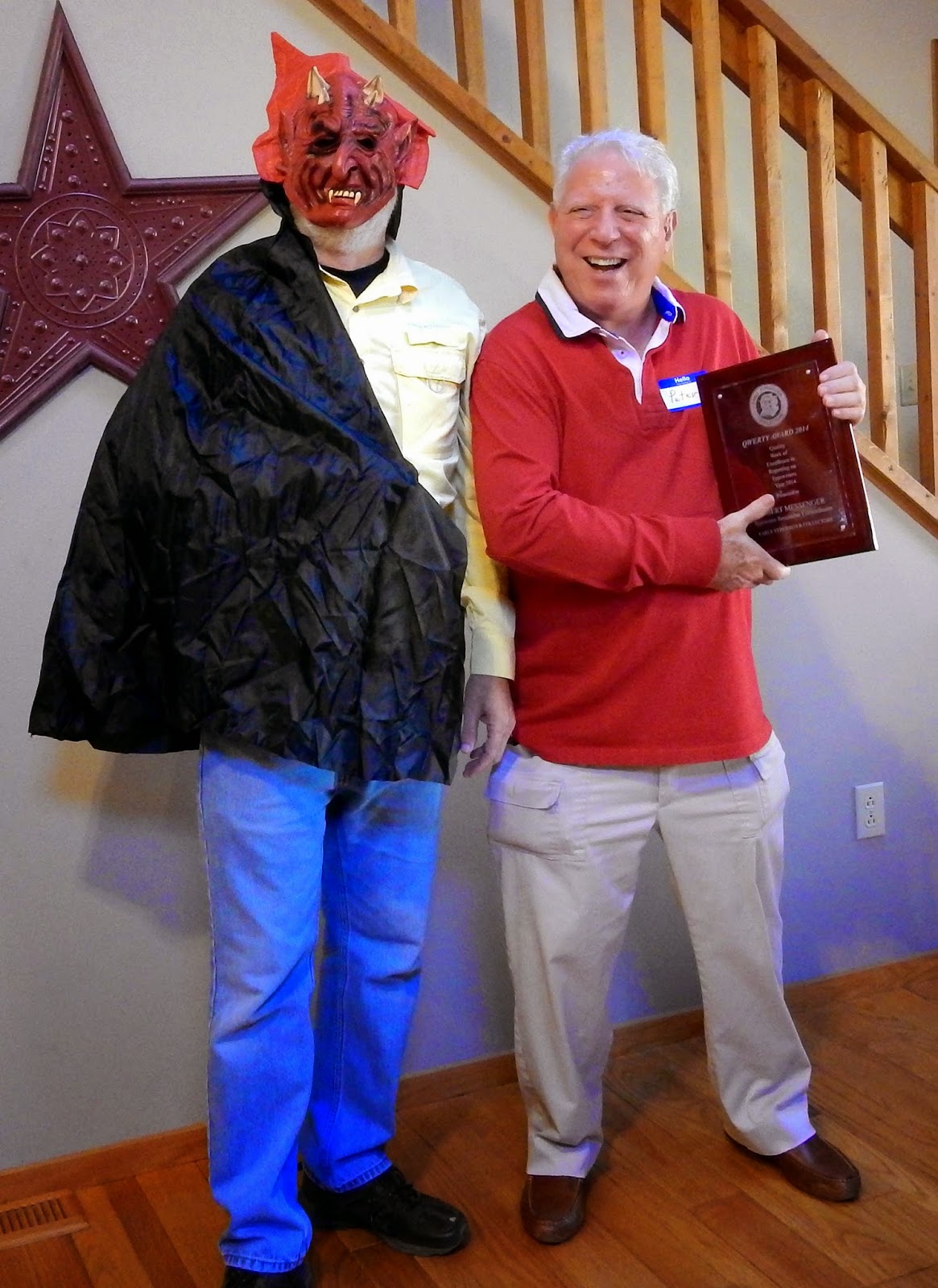 It would have taken a devil of a job for me to get back to West Virginia, to receive the award in person. If I had made it there, I would doubtless have stayed on in the US for another once-in-a-lifetime experience, to watch the All Blacks play in Chicago next weekend, thus missing my son's wedding here in Canberra on Saturday. So perhaps it's just as well I didn't go!
Nonetheless, my friends and family in Canberra took great pity on me as I pined for Chestnut Ridge, and went to extraordinary lengths to soften the blow of not being able to receive the award in person. So much so, they set about recreating as best possible the atmosphere of a Herman gathering, right here in Australia. The event was hosted by Peter and Deborah Crossing. Peter declared "We can't let this go by without a celebration" and made the "Herman-style" speech, as John Denver's Country Roads and Joni Mitchell's Morning Morgantown played in the background. Those who attended included fellow Canberra typewriter collectors Ray Nickson and Jasper Lindell, plus other close friends John and Marita Stephens, Bruce and Barbara Coe, Elizabeth Wetherell, Anne Messenger and John O'Dea, Danny Messenger and Mark Uhlmann. They lavished some wonderful gifts upon me, which extended to a "traditional" QWERTY Award cake: 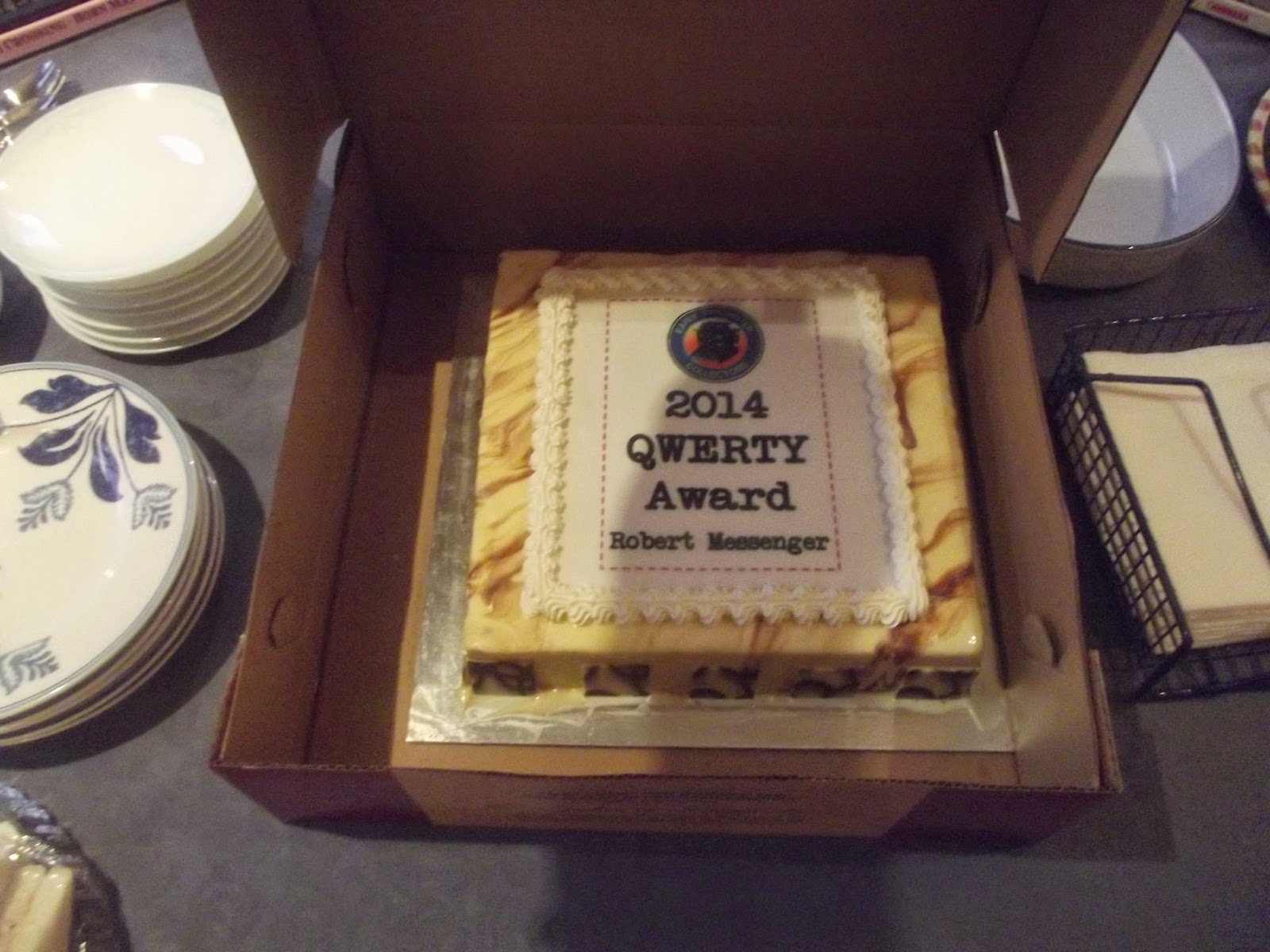 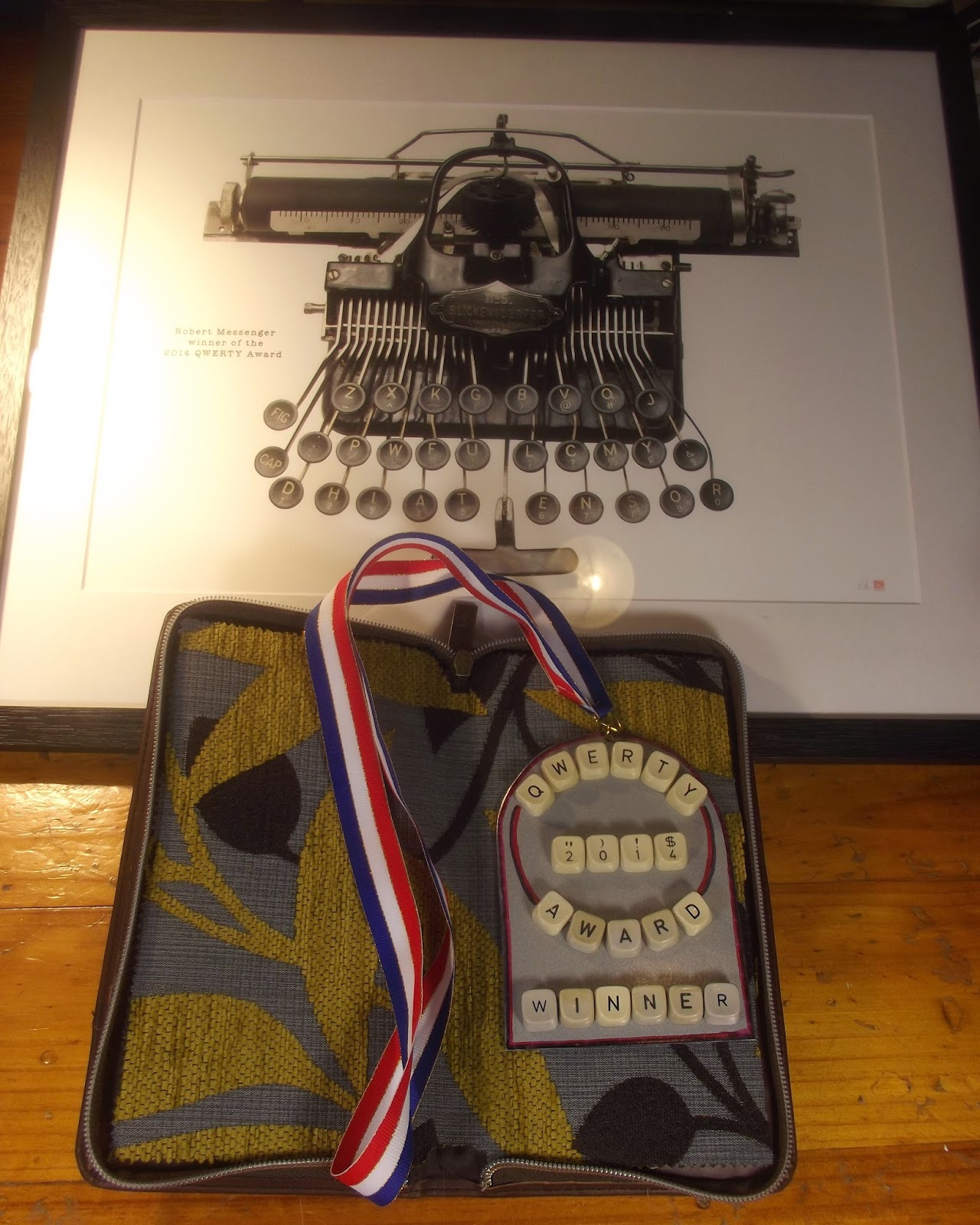 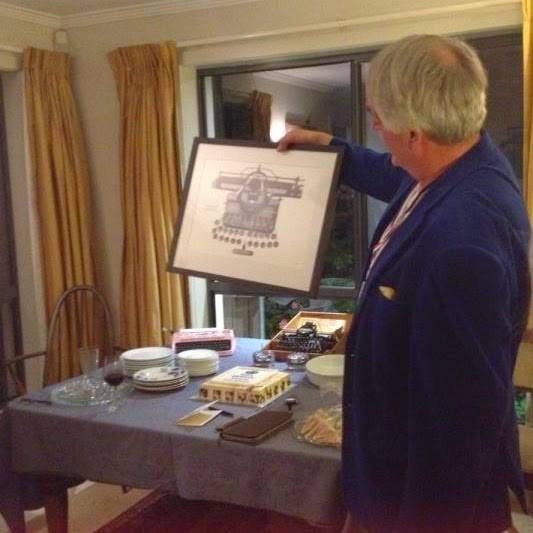 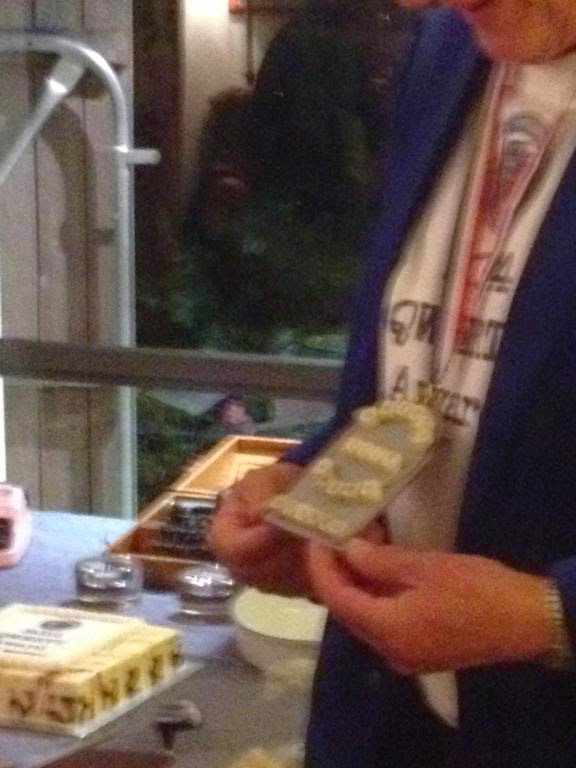 This well-crafted medal and framed Blick photo were given to me by John Stephens and his wife Marita. John is no keychopper - he'd found some spare parts Nakajimas lying around to make the medal. They were put to use in, for once, a good cause!
To help bring back memories of West Virginia 2013, I wore my Cincinnati "pimp" jacket. 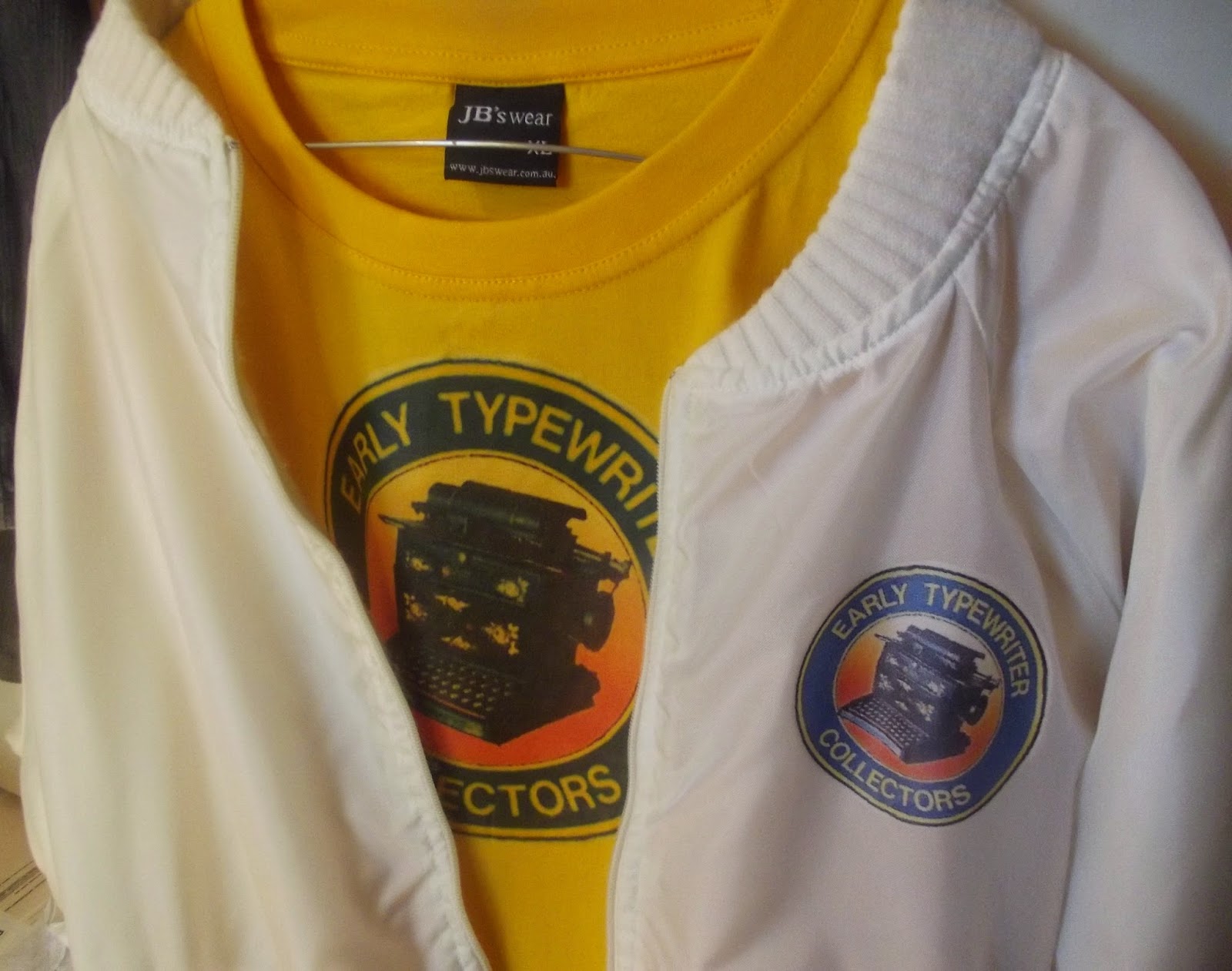 This came later - a "masters" ETC jacket. My friends know I like to wear my love of typewriters on my sleeve! 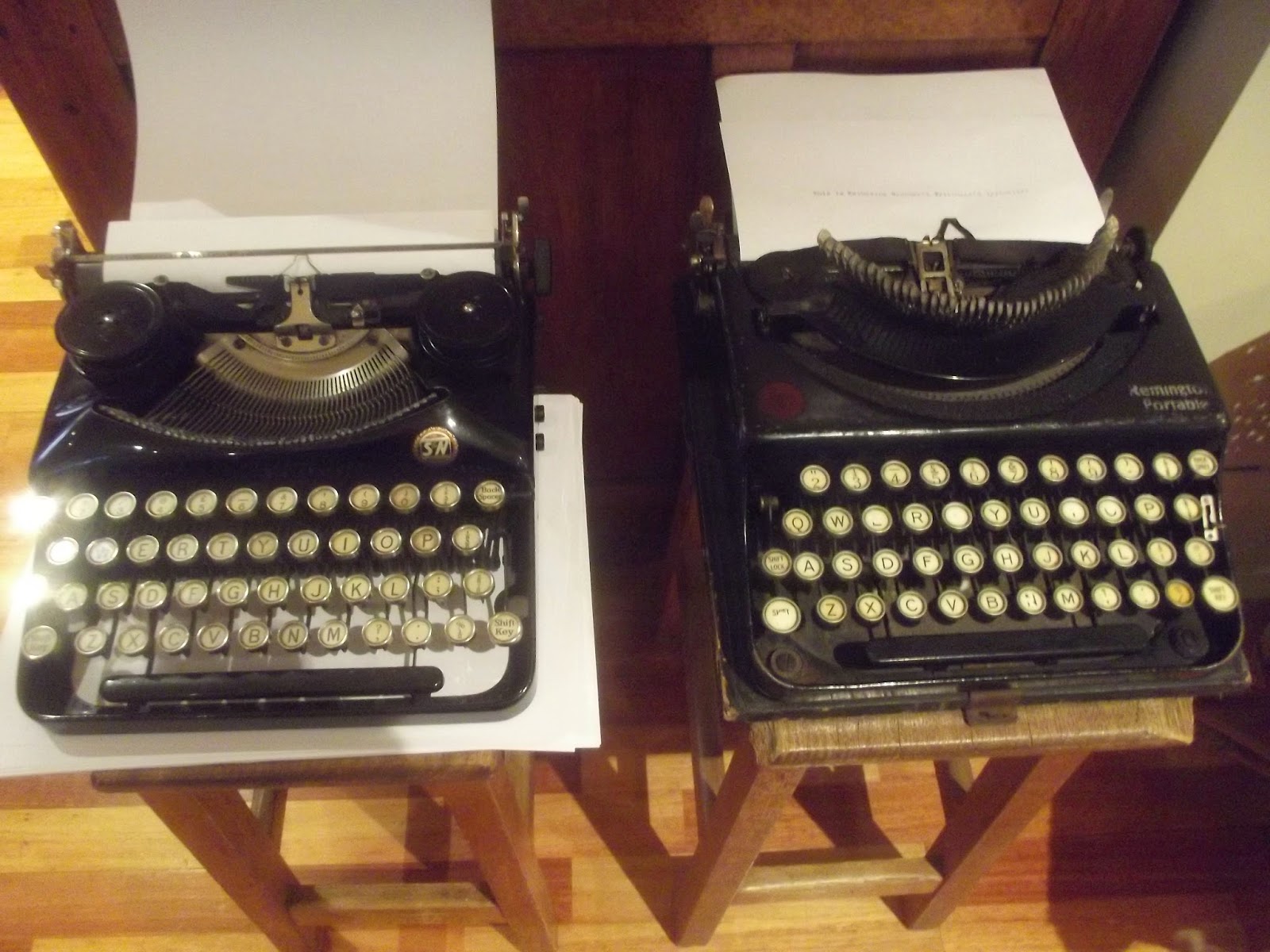 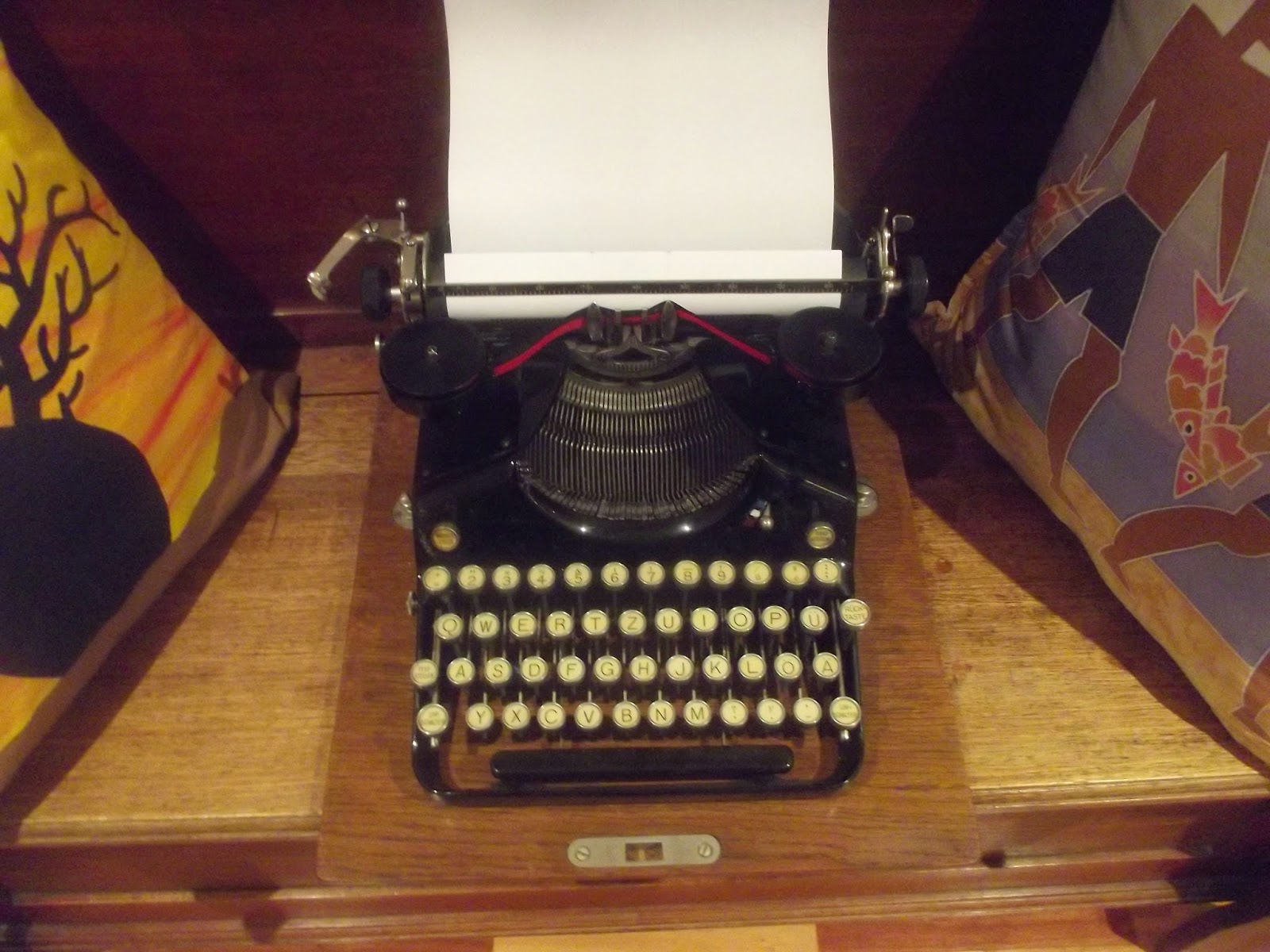 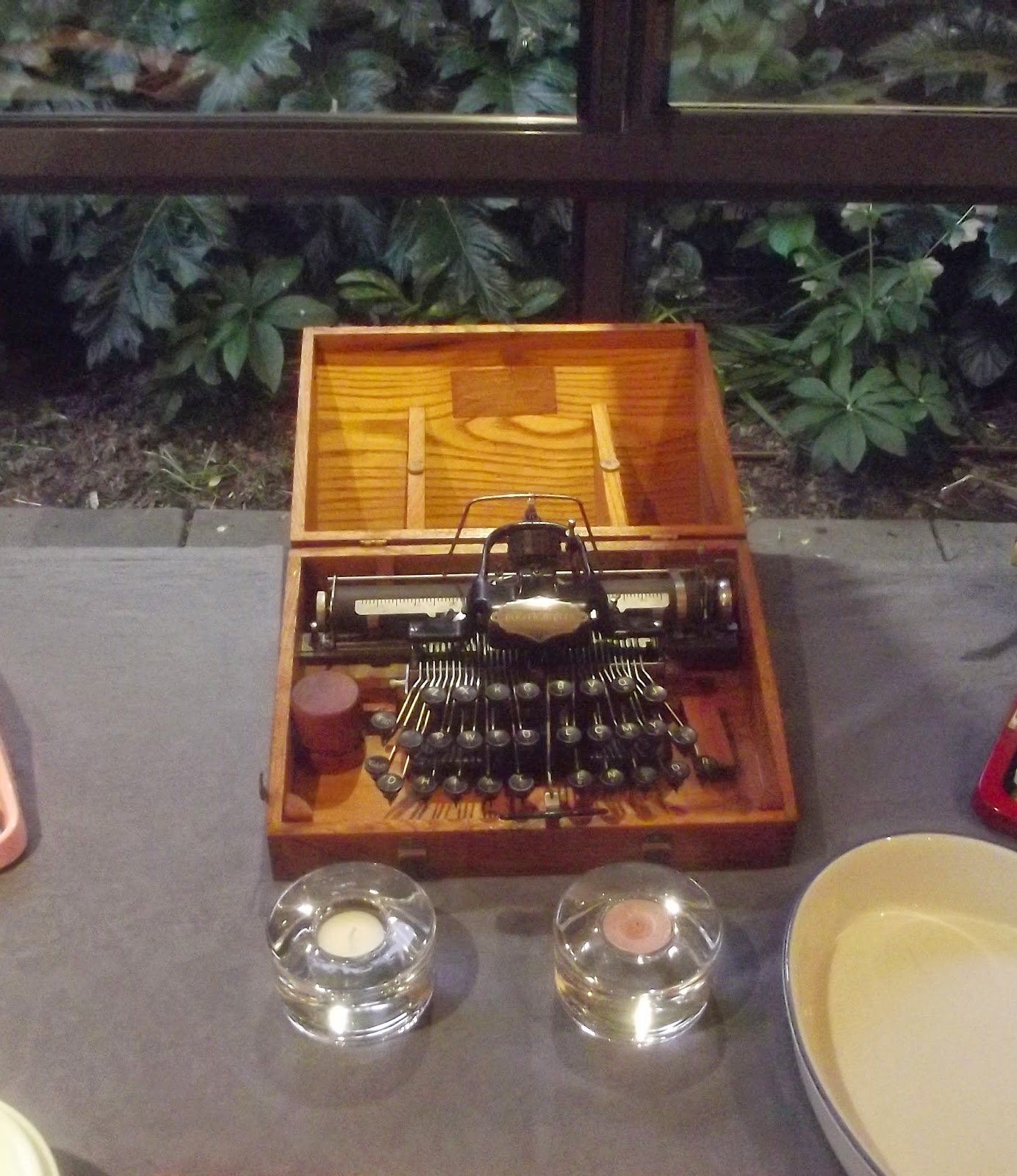 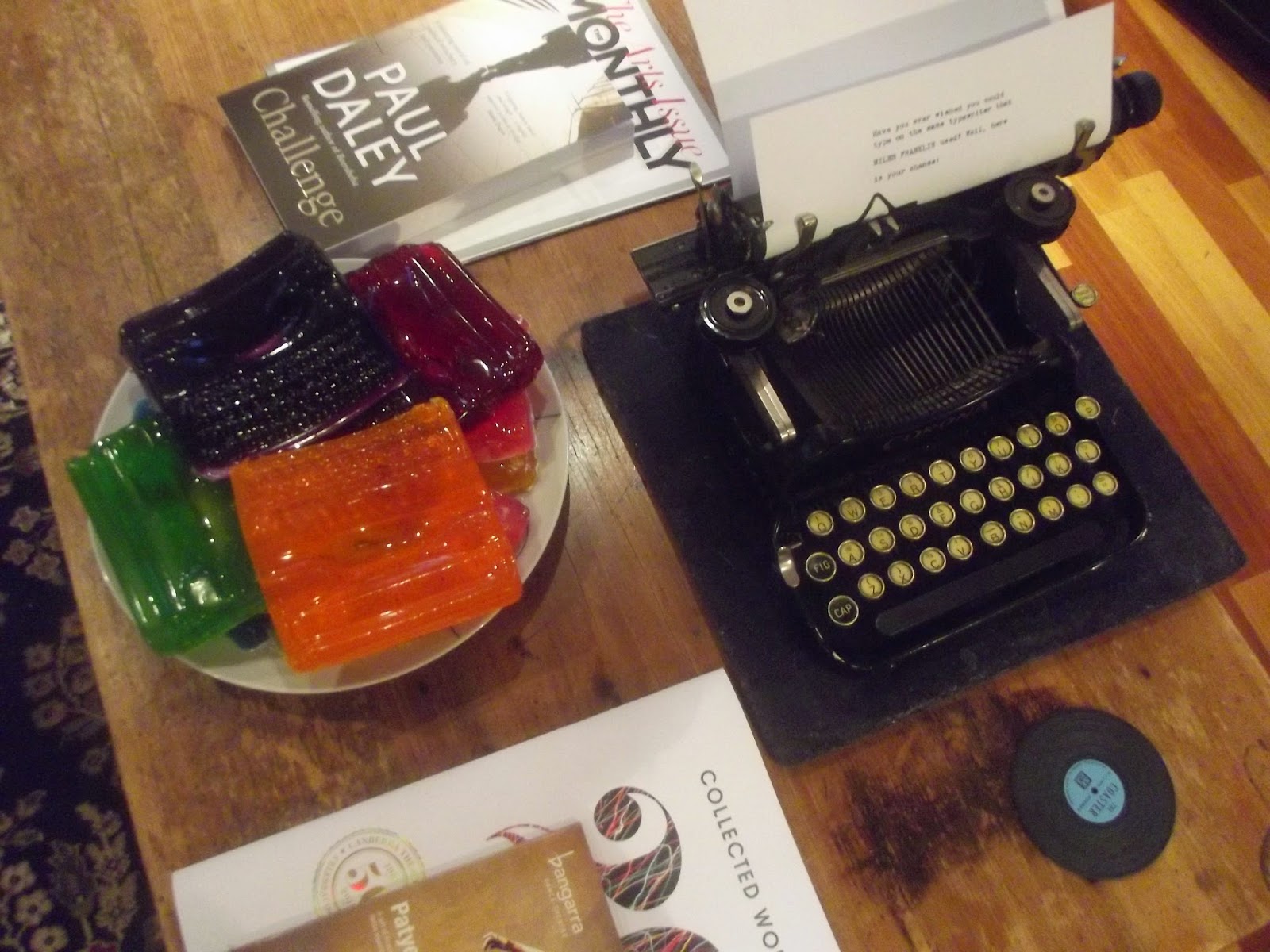 The awards even made it to the "In Brief" column in Monday's The Canberra Times: 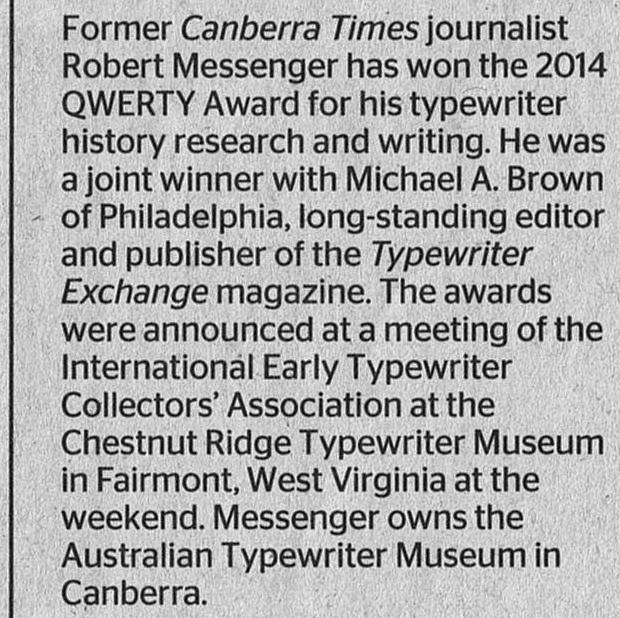 Ah well, these things do happen only once in a lifetime, so I figured I might as well enjoy it to the hilt, where and while I could.
Posted by Robert Messenger at 09:26

A very hearty CONGRATULATIONS! to you Robert. You are very deserving of the award.

I can't think of anyone more deserving of that award, Robert! Congratulations, and thanks a lot for fleshing out the story, history and lore of the typewriter for us, your fans. Congratulations!!

And enjoy the wedding on Sunday!

Of course you would win! Not many people have done as much as you have, and sooo well!!! We love you Robert.

Now the supression order has been lifted, I offer my heartiest congratulations! It was fantastic to be there last week. (And the wooden case won my mother over and the typewriter was allowed to stay.)

Congratulations Robert! Well deserved. Make sure to check your facebook messages to see a link I left you regarding a new book out that focuses on typewriter stories. Cheers, Marilyn.