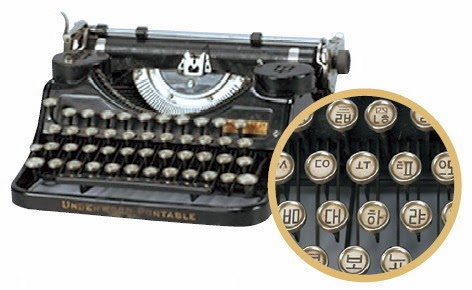 The National Hangul Museum in Yongsan, Seoul, devoted to the Hangul language, opened earlier in the month and contains the oldest Korean language typewriter, Song Ki-Ju's Underwood portable. Hangul is a featural alphabet of 24 consonant and vowel letters.
At age 25, Song Ki-Ju graduated from Yonhee College (now Yonsei University) in Seoul and went to the US in 1925. He received his BA from Texas State University the next year. In 1926 he was employed by Chicago mapmakers Rand McNally & Company. While there he invented the Hangul keyboard by arranging 42 keys on the Underwood. In 1933 he entered an agreement with the Underwood Typewriter Company in New York to make the machine, but it was not patented in the US at that time. Ophthalmologist Pyung Woo Kong (1907-95) had tried to buy out Song's invention without success, but when Song was abducted to North Korea during the Korean War, Dr Kong patented the keyboard in the US in 1953: 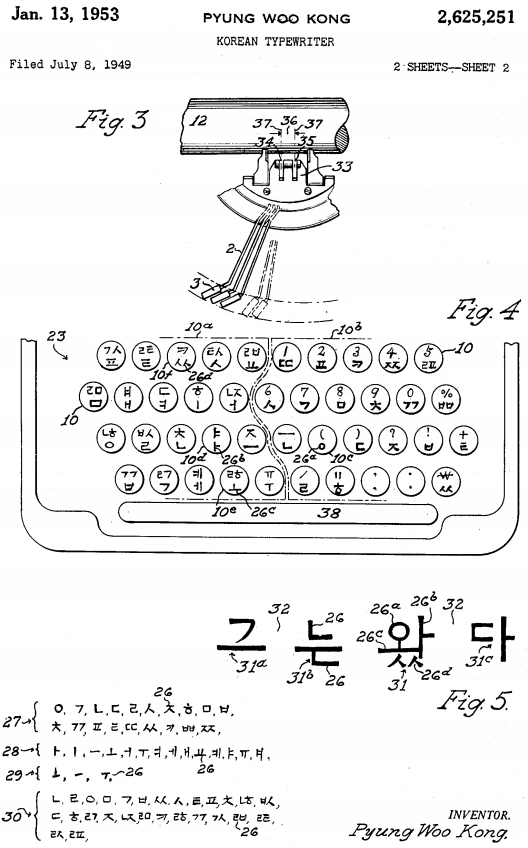 Song Ki-Ju's grandson, Song Se-young, has donated the typewriter to the museum. The arrangement of vowels and consonants of the complex Korean alphabet allowed users to efficiently form Hangul words. See Korea Times story here.
How to treat an old typewriter 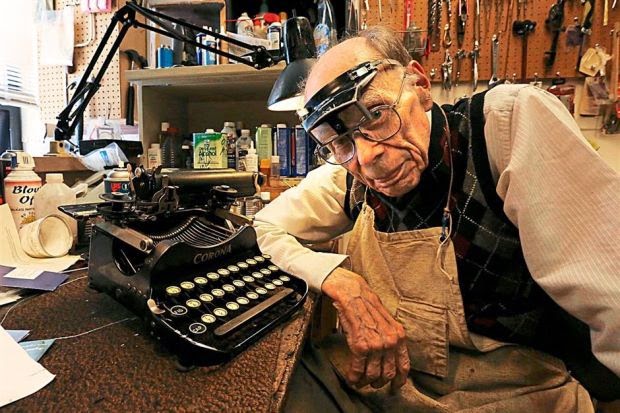 See stories on the "Last Typewriter Repairman", Bob Montgomery of Bremerton, Washington, here, here and here. Mr Montgomery will turn 93 next January 26.
How NOT to treat a typewriter 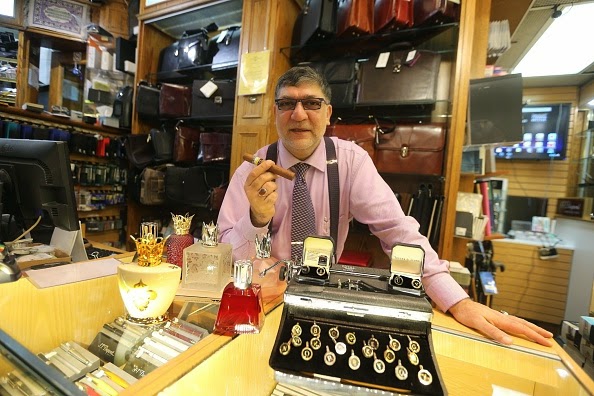 Akil Rahemtullah, owner of B Sleuth & Statesman Inc, a store in the Exchange Centre in downtown Toronto, sells "one of a kind cuff links made from old typewriter keys". See Toronto Star article here. 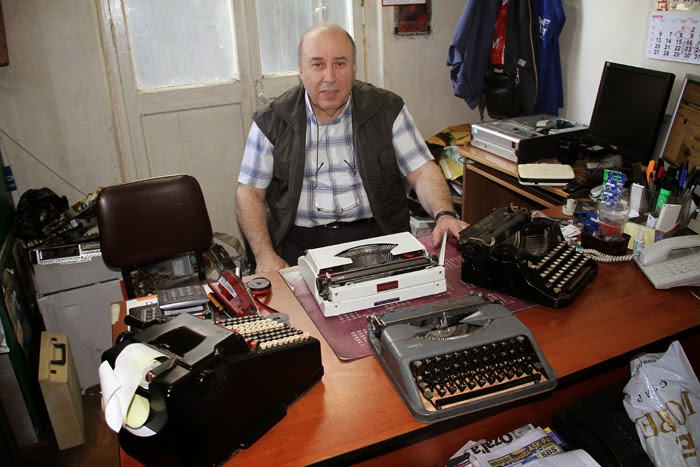 Doğan Hızlan writes in the Hürriyet Daily News: "We do not use typewriters anymore. We have donated them to museums or libraries; or maybe we keep them among our antique goods.  I can still see typewriters in the windows of stationary stores while going down the slope from Cağaloğlu to Sirkeci. There must be a demand for them since they are being showcased. Most of the typewriters sold in Turkey currently are second-hand, reportedly. But there is still a typewriter repair shop in Babıâli. If you have a typewriter, take it down from its dusty shelve. If you don’t have one, go and buy one immediately. If you ask me why, let me say that the typewriter is the safest writing tool." See the full "Typewriters are coming back" column here. See story in Turkish on typewriter repairman (image above) here.

One for Marty Rice: The Hemingwrite 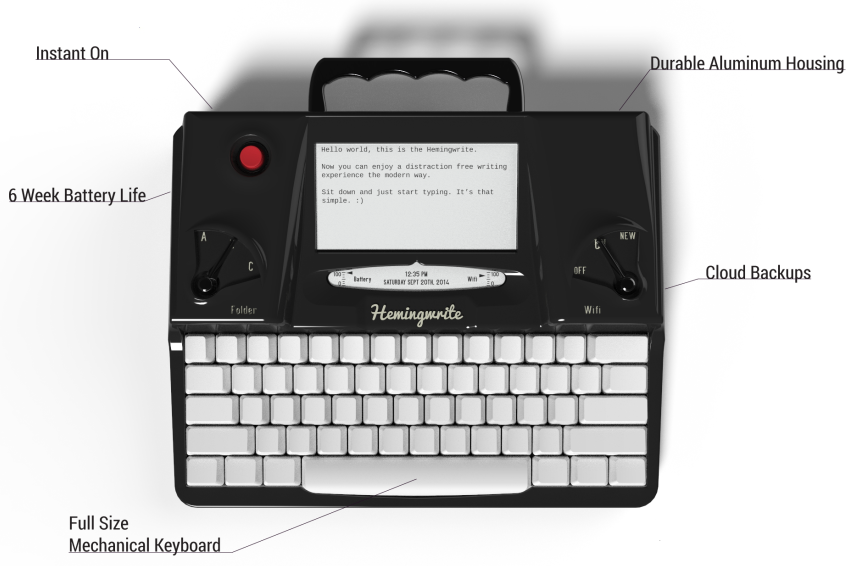 Amanada Lewan at Michipreneur reports: "A writer in the digital age has plenty of savvy digital tools, and plenty of never-ending distractions. While there’s software out there to remove those distractions, Michigan entrepreneur Adam Leeb has come up with a whole new product to make the writing process better. Inspired by the traditional typewriter, Hemingwrite could be a writer’s new best friend. Leeb says it’s especially helpful for those who don’t write full time. 'We wanted to create a single purpose tool. There wasn’t really a modern tool that helps people move forward without direction,' said Leeb." See story here.
While we're on the subject of Papa Hem, Amanda Kooser at CNET repeats the one about Hemingway "leaning over a desk". 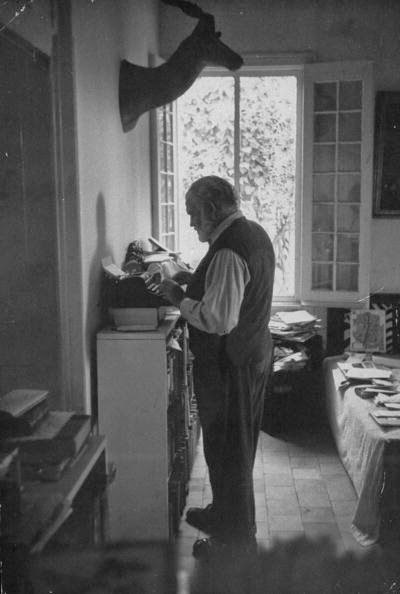 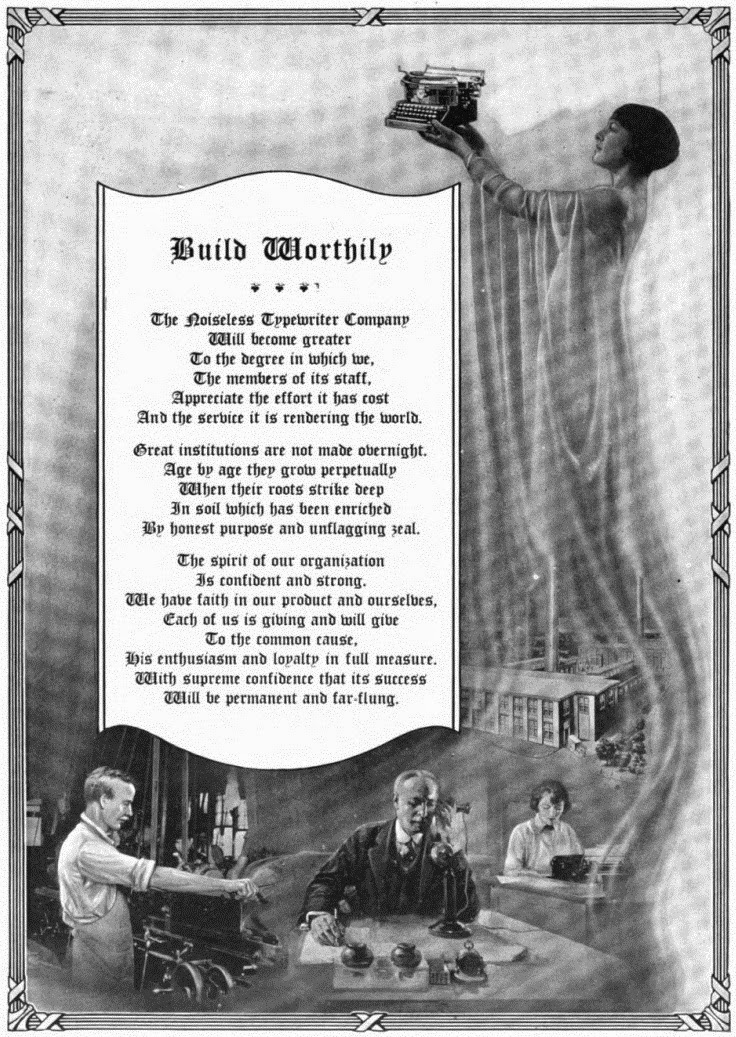 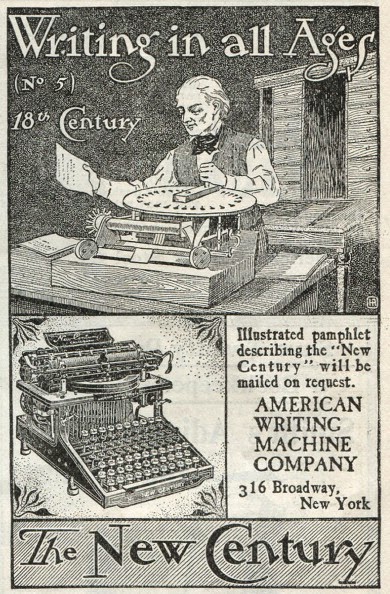 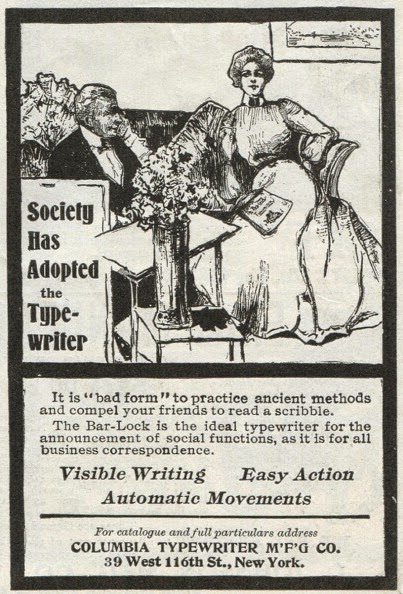 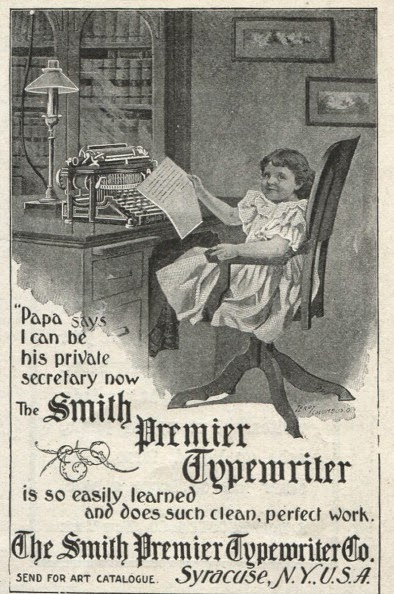 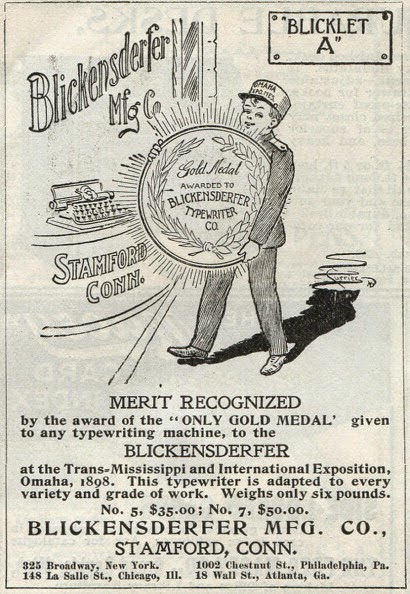 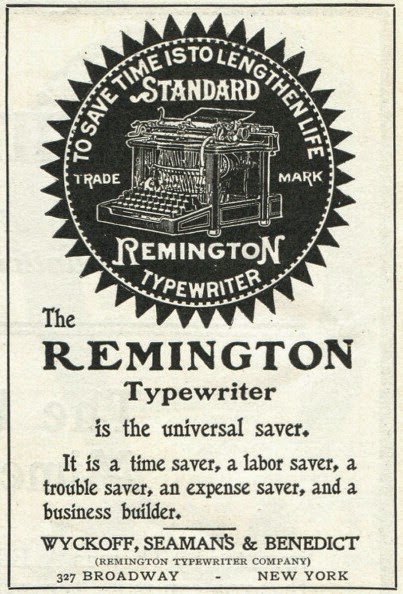 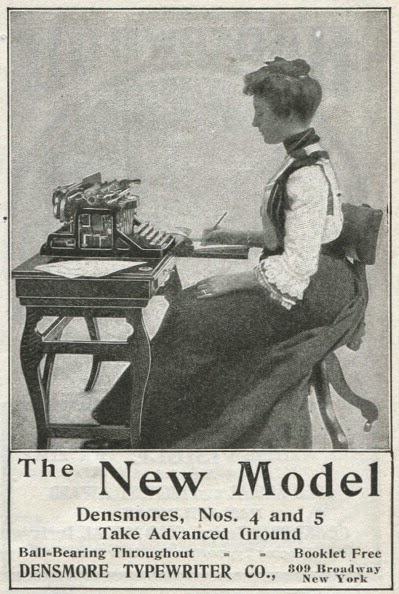 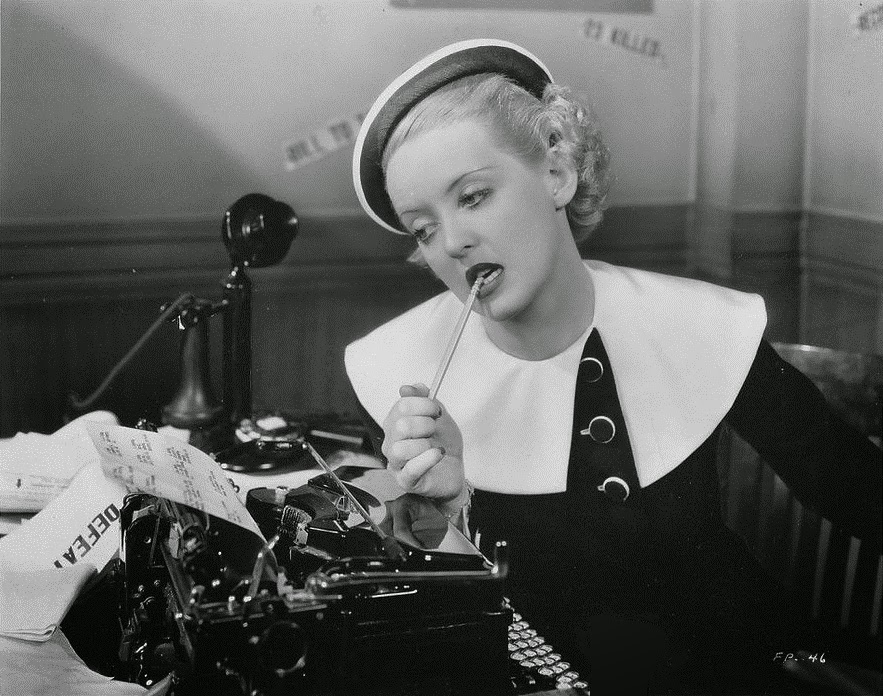 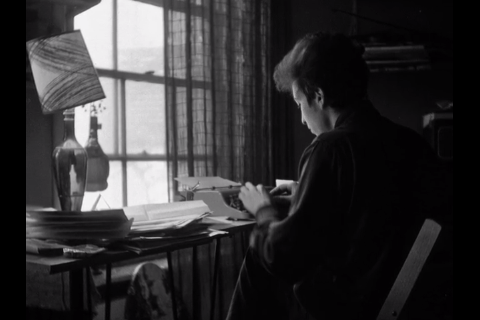 Time to think about Christmas cards 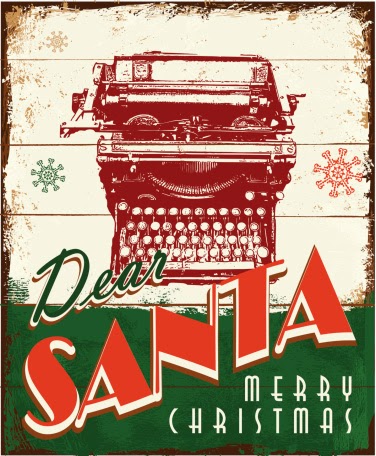 At the Movies: Pick the Typewriter 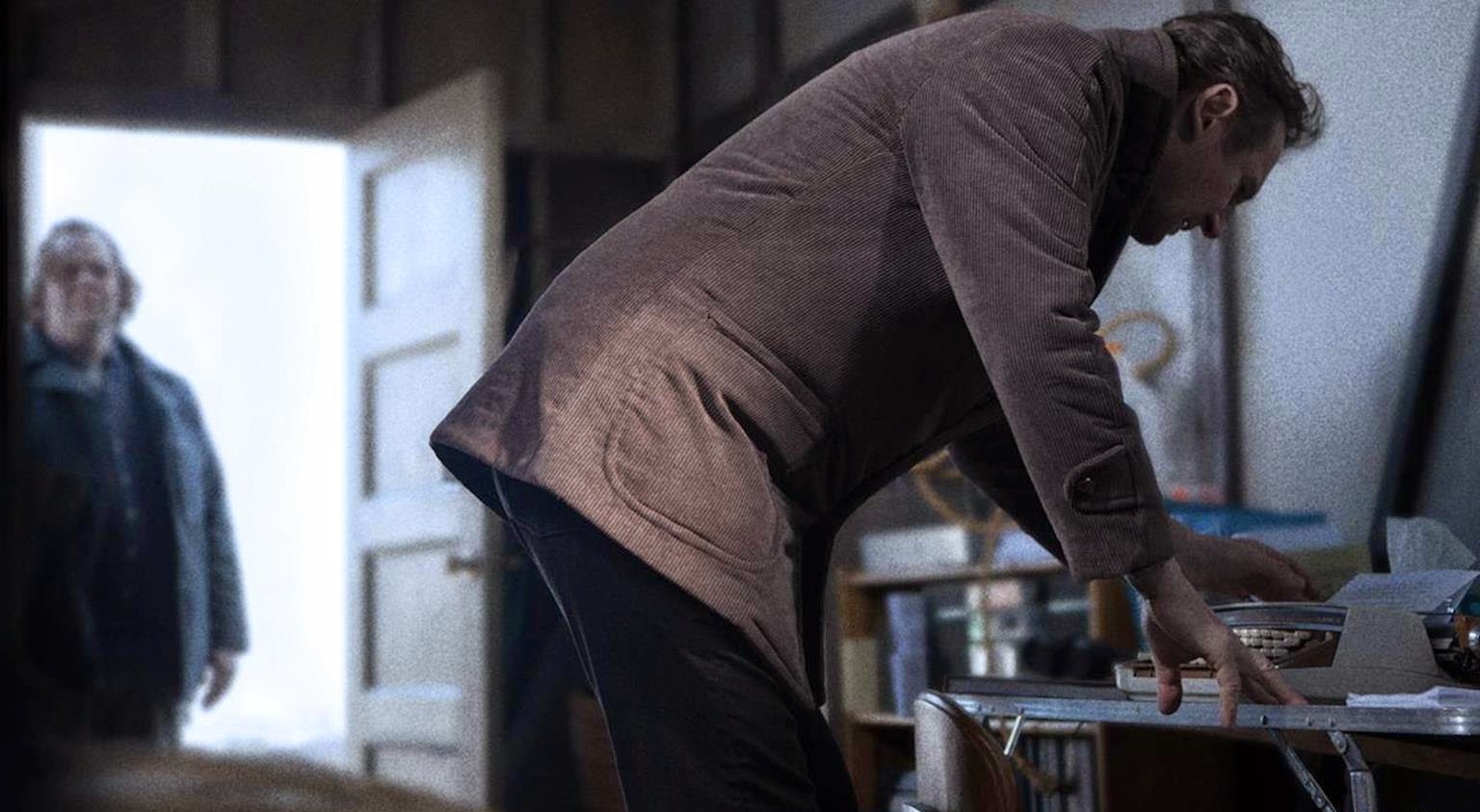 Liam Neeson in A Walk Among the Tombstones
Miss Typewriter 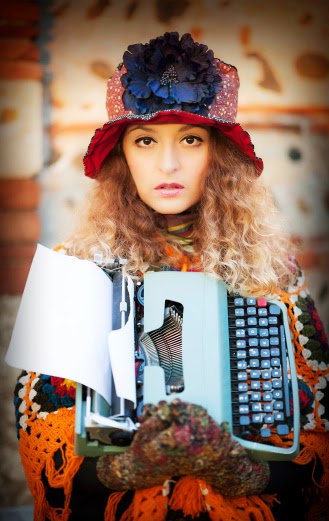 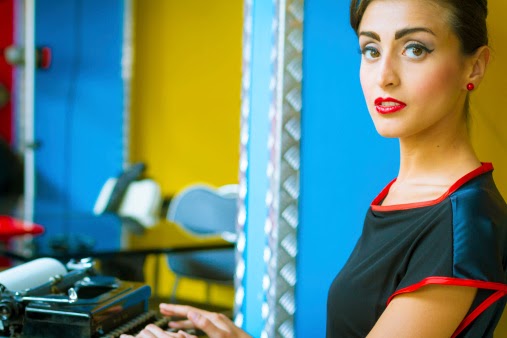 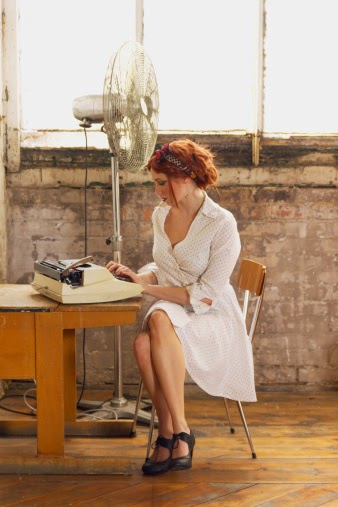 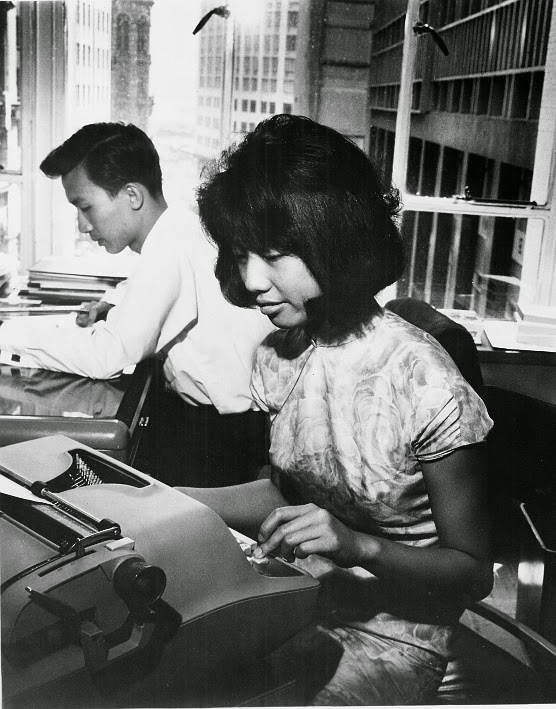 I kind of like that Hemingwrite. It's moving in the right stylistic direction and could be a worthy successor to the Alphasmart.

Mr. Montgomery is my local repairman--he does incredible work!

Those are some great old ads and photos. I've read about Mr. Montgomery.

Ha! The Hemingwrite! Thanks a million for remembering my "anti" obsession with Hemingway!! Now if only the machine can tell lies for you it would be the perfect tribute to the "great" man!

The Korean typewriter invented by Song Ki-Ju was a conventional typewriter with Korean symbols on the keys, and it typed text in the traditional Chinese direction - in vertical columns from right to left - by putting the symbols on the keys sideways. Gong Byung-Woo invented an improved Korean typewriter that printed Korean from left to right, with special mechanical features that assisted in the building of syllable blocks.