All About Eva – and her Baby Empire Portable Typewriter

Or, as John Steinbeck (who, Eva reminded me, I’d said had used a Hermes Baby) might have written:

“Of Typewriters and Tamarillos” 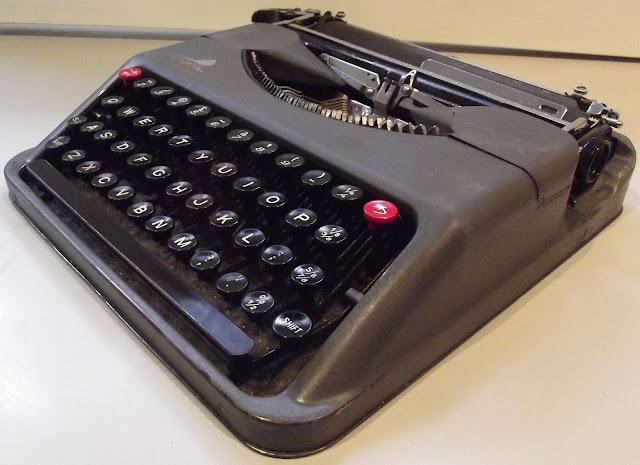 Having just returned from meeting Eva, and picking up her Baby Empire portable typewriter for servicing, I read Ken Coghlan’s kind comment on my “The Story of Eva” post of last night.
I want to thank Ken and Richard Polt for their comments. Richard said, “Great story - a moving illustration of how these little machines can play important parts in our lives …”
Ken added, “Very touching story. I would like to hear how it all works out with you repairing her typewriter. It's great to see that she refused to move onto an electric. Atta-girl!”
Ken’s request is my happy command.
I felt like saying “Atta-girl!” myself when I met Eva this morning.  She said she is “80 going on 81”, but is a very much an in-touch, young-at-heart (and vocabulary) livewire yet gracious lady. 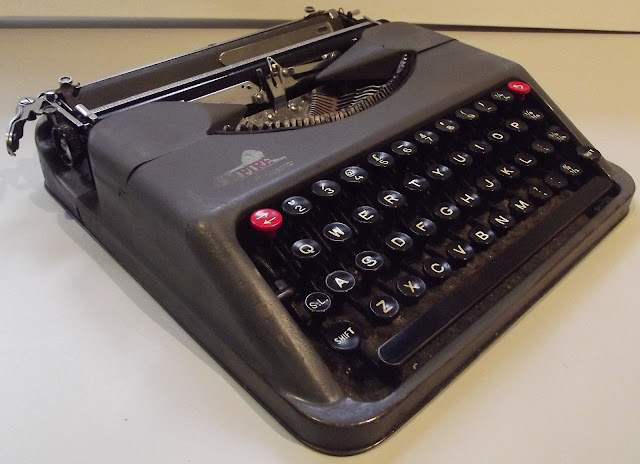 I spent almost two hours with her, hearing much more about her amazing and sometimes quite sad life. I could have stayed and listened all day, but with this exhibition opening coming up on Saturday, there were other more pressing matters to be dealt with.
I did stop long enough to accept Eva’s offer of a feast of tamarillos. Tamarillos are considered something of an exotic fruit in Australia, but in New Zealand, where both Eva and I grew up, they are very common. The skin is the colour of this type. When Eva and I lived in New Zealand, we knew them as “tree tomatoes”. It’s also known as a Dutch eggplant in Indonesia.  The tamarillo is native to the Andes of Peru, Chile, Ecuador, Colombia and Bolivia. 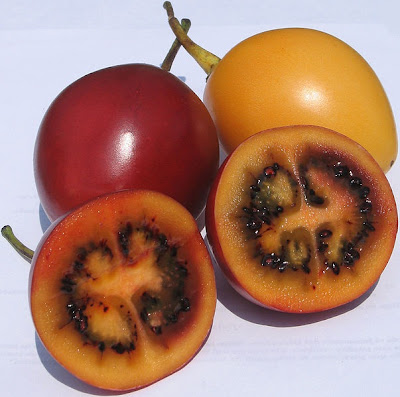 If you ever come across a tamarillo, try it. Much sure it’s soft and ripe. Slice it across the middle, add a sprinkling of sugar to the surface of the cut fruit and dig a teaspoon into the flesh. They are absolutely delicious.
Both Eva and I have diabetes Type 2, but tamarillos are one of those indulgences neither of us can resist.  Similarly, we share a weakness for “chocolate fish”, a small chocolate-coated marshmallow fish-shaped sweet. These little delights remind us both so much of our childhoods in New Zealand. 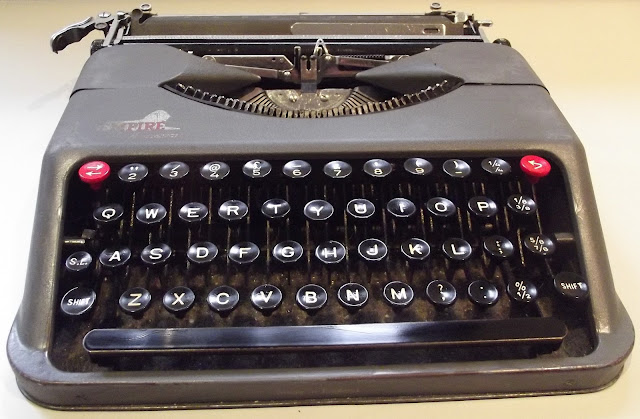 Eva might still relish digging into tamarillos. Sadly, however, the strength in her hands and arms isn’t what it once was. I offered her an Olivetti Lettera 32 with a cursive typeface, thinking it would be good for letter writing, but Eva commented that “her friends wouldn’t like that at all”. That is, I suppose, after 60 years of receiving letters written in the Baby’s elite-sized Roman typeface.
I’d suggested the Olivetti as a replacement for Eva’s Empire Baby, but Eva immediately declared the Lettera 32 was “far too heavy” for her. It possibly didn’t help that I’d given her a gentle slap on the wrist for using white-out, the signs of which were all too obvious on her Baby’s platen. 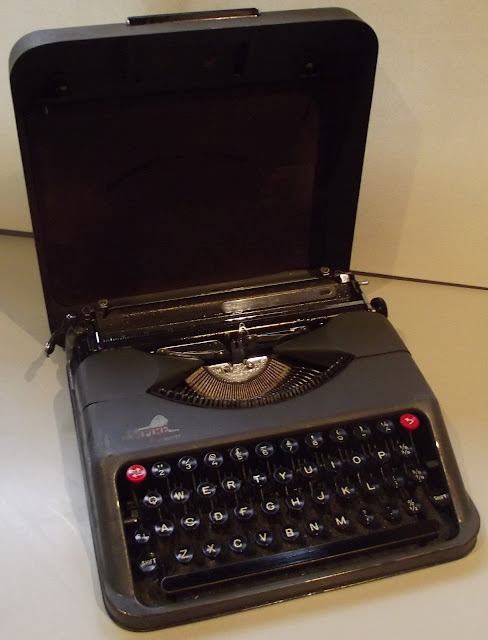 Most typospherians would agree there isn’t a lot of difference in weight between a Lettera 32 and a Hermes Baby, but Eva couldn’t even slide the Olivetti on her desk. I pleaded with her to at least try it out, but she refused. “There’s no point,” she said, “I’m not going to keep it.”
Eva was clearly uncomfortable with my refusal to consider taking any money for a replacement typewriter, or for servicing her Empire Baby. Needless to say, however, no money will change hands.
But I was almost relieved to hear Eva say that, quite aside from what she felt was a considerable weight difference between the machines, she would feel “disloyal” in using the Lettera 32.
“Why, because it’s Italian?”
“Not at all – because of this,”she said, pointing her Baby. 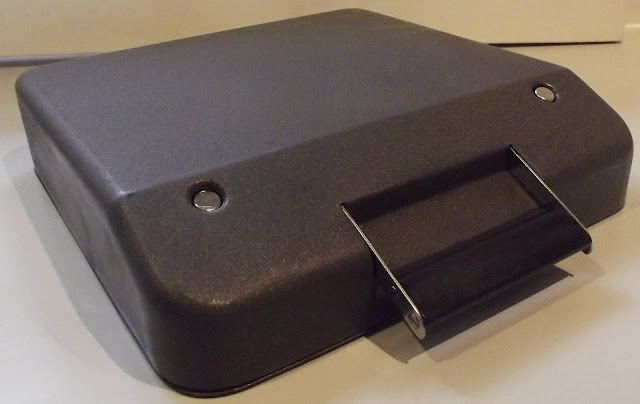 I suspect another compelling reason why Eva wants to hold on to her Baby is that it was a graduation gift from her parents when she was at Auckland University in 1951.
Eva’s Empire Baby was in nowhere near as bad a condition as she had warned me to expect. It will take a matter of an hour or so to have it working like new. It’s already doing that, as can be seen from this (very poorly typed*) typecast: 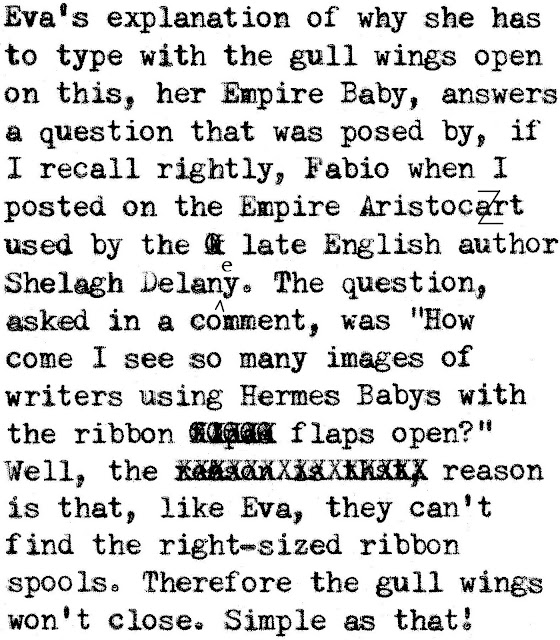 *My excuse is that I cut the top off a finger the other day (not while slicing tamarillos, I hasten to add) and thus my keyboard work is more tardy than usual!
Posted by Robert Messenger at 15:04

No need to excuse your keyboard work. Have you seen any of mine of late? An absolute shambles.

Good on you Rob for servicing this for the lady. I myself would refuse payment. Just hearing her story would be enough for me. That's magnificent.

Also, it is excellent to see that gorgeous machine back up and functioning again. Excellent work.

And thank you for sharing the tale.

very cool story. I wonder if she'd have used a Parva while waiting. On the other hand it seems you could have fixed it in place in the time you had with her. But this way you (and she) get another visit!

Nice story. Eva must be a very interesting person. Nice typewriter. Your typing is not nearly as bad as my last few posts.

I'd never even heard of tamarillos! They look beautiful and I imagine they're delicious.

I think it's really neat that the two of you both grew up in New Zealand. Something other than typewriters to share, eh? I have only handled a Hermes Rocket, which I have come to assume is the same as a baby, and now you have me wondering what would be lighter in weight.
This story, and update, have really made my week. To find someone so emotionally attached to their typewriter, when everyone else seems to be throwing them out or cutting off their keys, is a great thing to witness. And you lucky dog...you were able to help!

PS-Did you hook Eva up with some spools of a proper size? :D

Hello there, I stumbled across your blog while researching a recent acquisition: a 1911 Royal Standard No. 5 in very rough condition, that I would like to restore. Thank you for having such a wonderful and large variety of information on these wonderful old behemoths accessible to the public!

However, I must admit that I subscribed because of your posts about Eva. I simply adore them. I hope this is the beginning of a wonderful friendship for you two and that you continue sharing her with us here. Again, thank you!