Oh, For the Sweet Cacophony of Typewriters 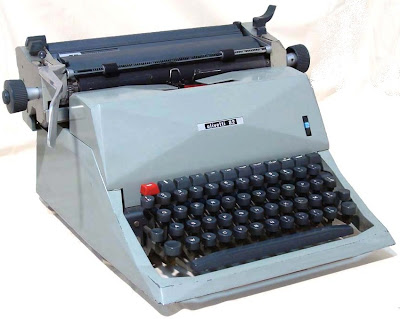 P.U. Casagrande Collection
The visit by Canberra Times columnist Ian Warden to my typewriter exhibition at the Canberra Museum and Gallery (see his Gang-gang article here) got him thinking about his own experiences with what fellow writer-journalist Bruce Bliven once called the “wonderful writing machine”.
Warden's words on the subject of typewriters in a newsroom should strike a chord with typewriter lovers everywhere.

In his column “Boomer Angles” in the Forum section of Saturday’s The Canberra Times, Warden mused on his memories of using Olivetti typewriters in the Times' old Mort Street newspaper offices (now Times Square). Warden first joined The Canberra Times almost 35 years ago, when the newspaper’s standard office machine was the Olivetti 82 (Diaspron). 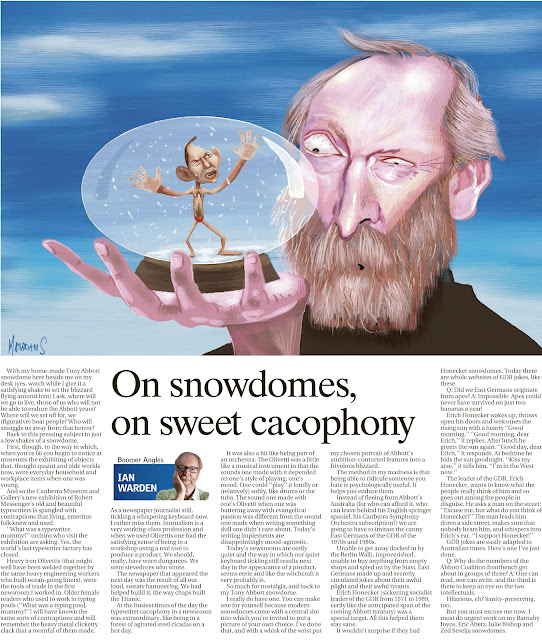 Warden opened with his thoughts on “the way in which, when you're 66, you begin to notice at museums the exhibiting of objects that, though quaint and olde worlde now, were everyday household and workplace items when one was young. 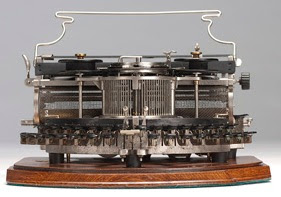 “And so the Canberra Museum and Gallery's new exhibition of Robert Messenger's old and beautiful typewriters is spangled with contraptions that living, emeritus folk knew and used.
“ ‘What was a typewriter, mummy?’ urchins who visit the exhibition are asking.
“Heavy iron Olivettis (that might well have been welded together by the same heavy engineering workers who built ocean-going liners), were the tools of trade in the first newsroom I worked in. 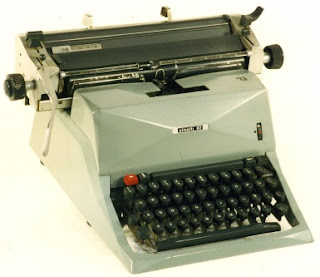 Collection of the late Tilman Elster
“Older female readers who used to work in typing pools (‘What was a typing pool, mummy?’) will have known the same sorts of contraptions and will remember the heavy metal clicketty-clack that a roomful of them made.
“As a newspaper journalist still, tickling a whispering keyboard now, I rather miss them.
“Journalism is a very working-class profession and when we used Olivettis one had the satisfying sense of being in a workshop using a real tool to produce a product. 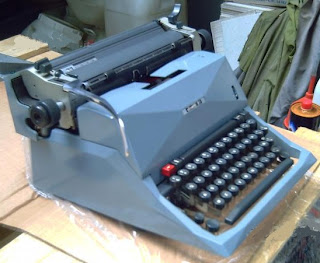 “We should, really, have worn dungarees. We were stevedores who wrote. The newspaper that appeared the next day was the result of all our loud, sweaty hammering. We had helped build it, the way chaps built the Titanic.
“At the busiest times of the day the typewriter cacophony in a newsroom was extraordinary, like being in a forest of agitated steel cicadas on a hot day.
“It was also a bit like being part of an orchestra. The Olivetti was a little like a musical instrument in that the sounds one made with it depended on one's style of playing, one's mood. 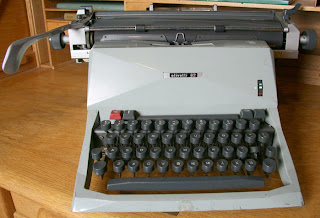 “One could ‘play’ it loudly or (relatively) softly, like drums or the tuba. The sound one made with one's Olivetti when one was battering away with evangelical passion was different from the sound one made when writing something dull one didn't care about.
“Today's writing implements are disappointingly mood-agnostic. Today's newsrooms are eerily quiet and the way in which our quiet keyboard tickling still results next day in the appearance of a product seems eerie and like the witchcraft it very probably is.”
Posted by Robert Messenger at 23:07

Nicely stated. I wish I could visit a newsroom of old.

The Diaspron excites me. I hope to snag one in the future.