The Story of Eva and Her Loyal Friend: The Baby Empire Typewriter 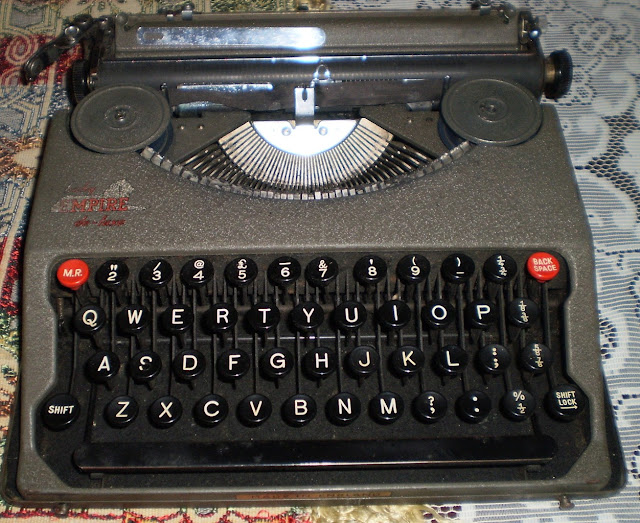 In going on 47 years in newspapers, I have spoken to some interesting people: Muhammad Ali, Lech Walesa, Gerry Adams, Gough Whitlam, Brian Wilson, Eric Clapton, Bob Hope, Geoffrey Rush, Michael Thwaites, the odd mass murderer, who shall remain nameless. And that’s to mention but a few who spring immediately to mind.
But I don’t think I’ve ever been as absorbed in a conversation as I was this evening, when I received a call from a lady called Eva.
And it was all because of typewriters. Well, one typewriter in particular: Eva’s 70-year-old Empire Baby portable.
Over the best part of an hour, during which time I hardly got a word in edge ways, Eva told me much about her incredible life – and of her long attachment to her typewriter.
Born to a Jewish doctor father in Nazi Germany in 1931, as a youngster Eva travelled with her family first to Palestine, then London, then as assisted migrants to Wanganui and Auckland in New Zealand, where she grew up, and grew to admire the country and its Maori people.

She married a scientist, who was always eager to buy for their home the latest “space age” equipment which came on the market. But throughout, Eva was determined to hold on to her beloved Empire Baby manual portable typewriter, scorning all advances in writing machines.
During a year in the US, her late husband bought her an electric typewriter. Eva tried it out, promptly stored it away in a corner, and went back to the faithful, lightweight Empire Baby. She was its mistress, it her loyal, reliable servant
Eva can’t be bothered with modern technology. Using computers is “nonsense” she says – sending letters by email is “so clinical … there’s nothing personal about it.”
Eva now lives in a small unit in a retirement village in Canberra. Apart from her Empire Baby beginning to show its age, she is as happy as a lark. She has a longed-for window seat, and her comfortable wicker table and chairs. “The family home was where we lived and the children grew up and moved out and all that sort of thing happened. But that was there and that was then … this is ‘me’”.
Before moving out of the family home and into the unit, after her husband’s death, Eva gave away all her “treasures”, her books, her pictures, her vinyl records, even her TVs. But she kept the Empire Baby. There isn’t much room to swing a cat, if she had one, but she has her typewriter. And yet I may be able to convince her to part with it, to try a “new” Olivetti Lettera 32 as a replacement.
“I’m not married to the Empire Baby,” she said. “I’d consider replacing it.” It’s the process of manually typing letters on a tiny, utterly obsolete yet highly dependable clickety-clack machine that most appeals to Eva, not the Empire Baby per se. She has clearly had a long, loving relationship with the Baby, and formed a powerful attachment to it. But typing is the thing … it’s personal.
“A typewriter is, after all, a part of you,” she said. “It’s your writing companion. It’s your friend.” 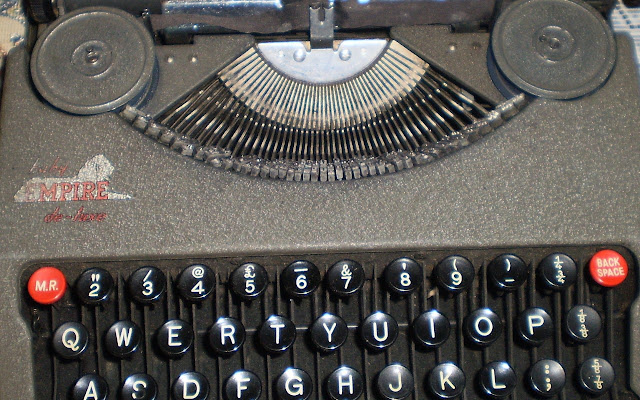 Eva has many friends around the world to whom she writes on a regular basis – and always with the Empire Baby. They comment about her persistence in still using a typewriter, but she knows they’d miss it if she stopped sending typewritten letters to them.
Once, the Baby’s “h” lost its leg. After putting up with it for a long while, Eva got the typeslug replaced by an Indian typewriter mechanic in Melbourne. “Where he got it from I do not know,” she told me.
But no sooner had Eva started writing letters with the new typeslug than her friends overseas were lightheartedly complaining. “We miss the legless ’h’,” they joked. “We’d got used to it … it was like your signature.” In fact, when the Baby was temporarily out of action, and Eva hand wrote a letter, a friend remarked, “I don’t think I’ve ever seen your handwriting before!”
When Eva took the worn-out Baby to the Indian repairman in Melbourne, he looked at it for quite some minutes, then burst out laughing. “What’s so funny?” Eva asked.
“My aunt in India has one of these. It’s in much better condition than your typewriter. My aunt keeps her Empire Baby in a vitrene. She treasures it. She’s never used it, but every now and again she takes it out of the vitrene and sits and admires it for a very long time. She says it’s the most beautiful thing she has ever seen.”
Eva found my mobile telephone number and called me in desperation. Her opening remark made me sit up and take notice. “I’m having trouble with my typewriter and I can’t finish this letter,” she said. “And it may well be the last letter I ever write.”
Eva reads my column and knows about my typewriter collection and the exhibition which opens on Saturday. “Where do you get all your typewriters serviced,” she asked. “All the people I knew who could service my Empire Baby have moved on to a higher place, where I suppose I might be soon headed. I don’t know what to do.”
“I service them myself,” I said.
“What, do you mean on top of all that writing and collecting and exhibiting? How do you find the time?”
Eva feels an affinity with typewriters. She once visited a Jewish museum in Frankfurt am Main, where she saw a Hermes Baby which had allowed a Jewish enclave to continue communicating with the outside world, at a time when their own world was closing in around them. Eva found looking at that typewriter a moving experience.
The upshot of our long talk is that Eva is going to bring her Empire Baby along to the opening of my exhibition of Saturday, and I am going to take it home and service it for her.
Perhaps I should also consider taking Eva home to her unit. “I get so excited when I go to see exhibitions,” she told me – I’m not sure how seriously. “I get lost going home. It takes me an hour and a half sometimes. I head off in completely the wrong direction, and get in the wrong lane.”
Eva may well drive in the wrong direction, and in the wrong lane, but when it comes to writing letters, she knows exactly where’s she’s headed: for her Empire Baby. She’s entirely on the right track.
Posted by Robert Messenger at 22:27

Great story -- a moving illustration of how these little machines can play important parts in our lives. How nice of you to offer to fix her typewriter.

Very touching story. I would like to hear how it all works out with you repairing her typewriter. It's great to see that she refused to move onto an electric. Atta-girl!

My dad just gave me one of these typewriters. I searched online to try and find out some more about it as I had never seen one before. I found your article about Eva its such a sweet story, I never thought of a typewriter as a friend. Thank you so much for sharing