Thinking of you in America: The Smithsonian S & G Typewriter

What's a good friend to do when he's travelling around the US with his wife and can't get to the opening of the typewriter exhibition in Canberra? Why, of course, go to the Smithsonian and look at a real Sholes and Glidden: 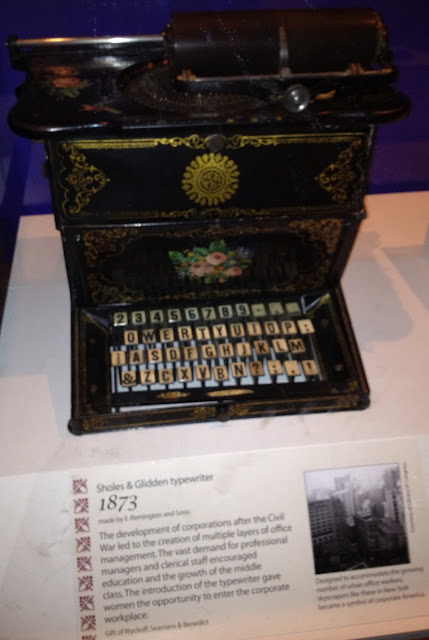 I note with interest that this S & G was gifted to the Smithsonian by Wyckoff, Seamans and Benedict.
Peter Crossing and his wife Deborah are in America visiting their son Matt in Maryland and - or so it would seem - dropping in for a session at every blues bar and jazz club on the eastern seaboard.
But Peter and Deborah, who would otherwise have been at the opening of the typewriter exhibition at the Canberra Museum and Gallery on Saturday, instead took the time to visit "every Smithsonian we could find" in Washington.
I'm not convinced, though, that Peter went to the American History Museum specifically to find the S & G: "We spotted this typewriter amongst other gems, which included Dizzy Gillespie's trumpet and an Edison tin foil phonograph.
"Spotting the Sholes and Glidden reminded us of your exhibition. Have just checked your blog and see that it has been very successful so far. We look forward to viewing it on our return."
In keeping with the typewriter tone of their tour, the Crossings in Baltimore "caught a fabulous blues band,  Lower Case Blues, at The Cat's Eye Pub in Fells Point". 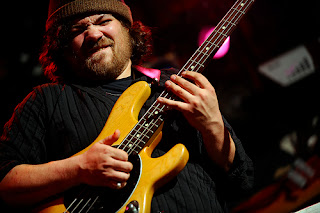 In fairness, Peter is consistent when it comes to finding typewriters while holidaying overseas and thinking of me. It was he who, on a visit to Vietnam with Deborah last year, found Ngo Ba Thanh's Voss portable typewriter at the Hanoi Women's Museum and sent me an image of it. 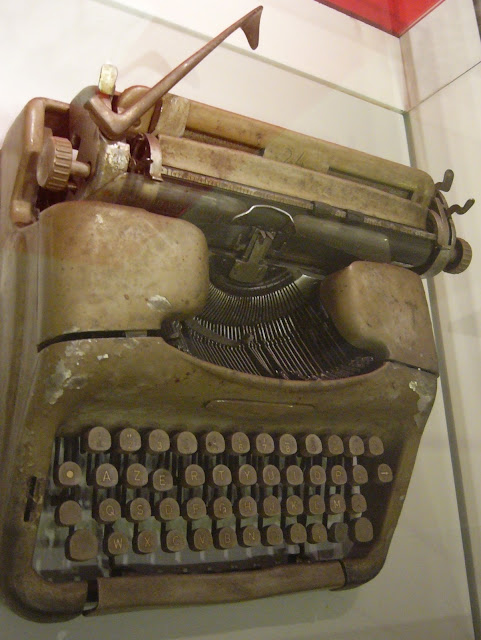 This provided me with one of my earliest posts on this blog, back on March 1 last year.
The Crossings are fortunate, among Canberrans, to have seen a real S & G. There are, to the best of my knowledge, only two in Australia, one at the Powerhouse Museum in Sydney, which was donated by Chartres, and the other at Museum Victoria's ScienceWorks in Melbourne. Here they are: 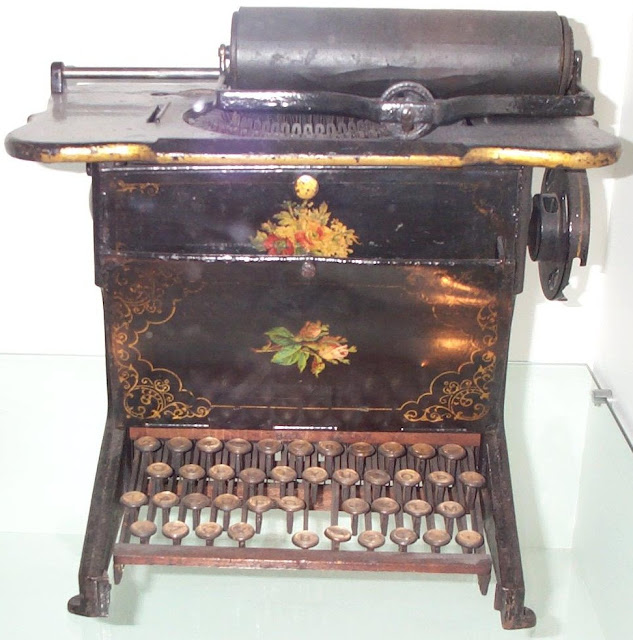 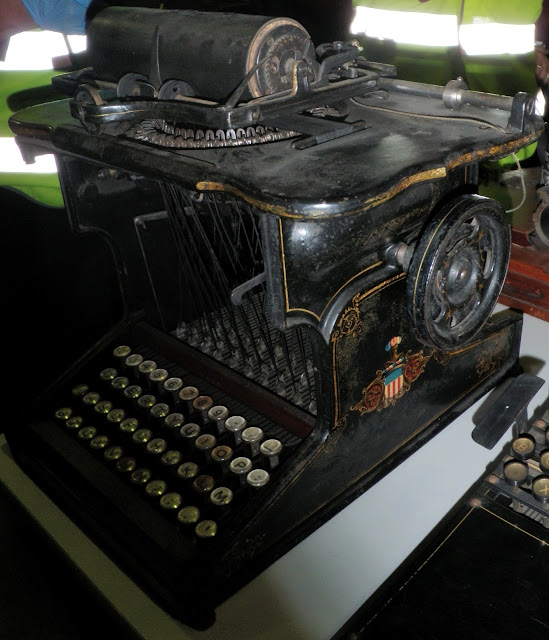 ScienceWorks, Melbourne
Not being in a position to afford to buy such a gem myself, some years ago I commissioned a local wood craftsman, Dr Keith Houston, to make me a "mock" S & G so I could at least show people what one looked like during the various typewriter presentations I make around the Australian Capital Territory.
I had in mind a miniature model, but Keith went to an inordinate amount of trouble, working off a large number of photos, illustrations, articles and even the original patent drawings to come up with a full-size replica. He even managed to make the spacebar move the carriage.
Keith wrote an entertaining article about his "homemade" S & G in the December 2009 edition of ETCetera (No 88).
I was delighted with the effort Keith put in, of course, yet there was something about this "homemade" S & G that didn't quite "sit right" with me. Keith had painted the final product in black, and somehow it looked just a little too close to the real McCoy, a little "too new" and too much like something which, I feared, someone might think I was trying to pass off as a real S & G (which, naturally, was never the intention). For a long while I contemplated getting an artist to add the colourful, ornate floral patterns which adorn many S & Gs, if only to offset the black. But that might have only added to what I wanted to avoid: a false impression of the object of the exercise.
Coming up to the exhibition now on at the Canberra Museum and Gallery, I wanted to include the Houston "homemade" S & G, so people might get an idea of what Sholes produced. But I was unhappy with the state it was in. Then it came to me: for me, the paintwork was the big problem.
So I set about stripping off all the paint. The more that came off, the more I liked it. I got a whole new appreciation for this replica. It started to talk to me of the original idea, my first intention. Here, for example, was the rusty old metal wheel hub from a pram or child's cart or scooter. As the paint peeled off, other bits and pieces that had been used by Keith were exposed for what they were - just bits and pieces. To me, the replica began to speak of what Christopher Latham Sholes might have done when he was building prototypes: that is, grab anything that might have come readily to hand - piano key connections, small sheets of metal, piping, drums, cord, a curtain cord plum, a hub, some cotton material to be stripped and soaked in ink - and screwed them all together.
I am much more comfortable now with this "homemade" S & G. It looks far more like what it really is: "homemade", rather than something which gives off any false pretentions toward being the real thing: 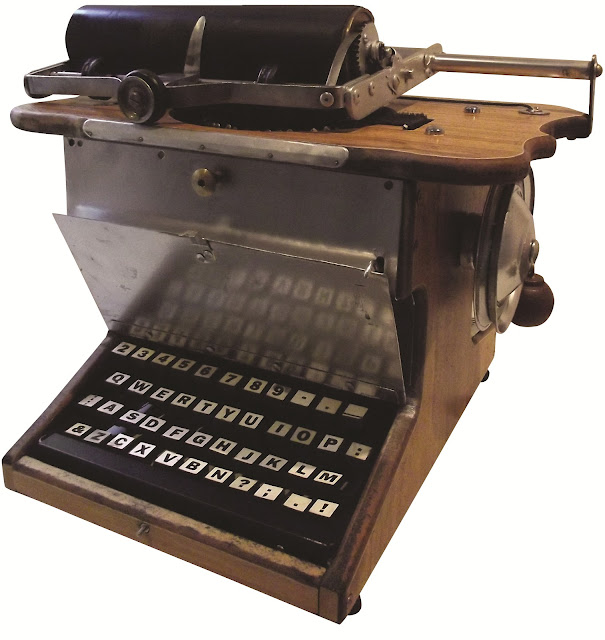 Posted by Robert Messenger at 11:16

Wow. Keith did quite an amazing job! The woodworking is beautiful, and I would love to see more pictures of it, especially showcasing the odd ball parts that he used. Congratulations to you for having such a great one of a kind piece.
I had thought the Smithsonian put most of their typewriter display into storage, but should have known the S&G would have been a mainstay. I do not live too far from there, so I might have to check it out.
Awesome post. Thanks for sharing.

Hi Ken. Thanks for your kind words. I had hoped to be able to link to a download of the ETCetera issue which has Keith's story. What I might be able to do is scan it in and post that. In it, Keith describes not just the oddball parts but the oddball way in which he came by some of them - it actually is quite amusing. I know Richard Polt found it interesting (and entertaining) enough to publish it in ETCetera, thereby, I guess (perhaps) running the risk of offending some purists who think real S & Gs should be regarded with more respect and not be "homemade" like this.

Hi Ken, me again. Unfortunately I can't photograph the "homemade" S & G in more detail at the moment, because it's behind glass the exhibition. I will when it comes back. The detail and accuracy Keith out into such things as the suspended typebars and the keys (which he copied from the Powerhouse S & G) is remarkable. It really was a great effort.

Sorry, I meant to say copied from the Smithsonian S & G, not the Powerhouse one, which has round keytops.

Feel free to scan the ETCetera story if you like, Robert.

Robert- A scan of the ETCetera story sounds amazing, and it looks like Richard has given the go ahead. Awesome. This is truly a remarkable piece, and I thank you so much for sharing it. It is most definitely the next best thing to owning a real S&G, and it has a great story behind it. You speak of 'purists', but I cannot imagine anyone would regard this with anything but respect and awe. I know I do.

It was great of Richard to let you use the ETCetera article. I completely enjoyed it. I can't wait to see more on the model S & G.

I have been to the Smithsonian many times and have yet to see everything there. Somehow I never noticed a typewriter.

The picture of the S&G at ScienceWorks, Melbourne showed me the placement of points on the key-levers connecting with wire to the type-bars.The repeated pattern by four key-levers each.

I wonder when the connecting points formed the opened-eye-shape.
A reason why S&G typebars so Clash and JAM. - The actuality on - QWERTY history: