The Good, The Bad and The Ugly: Imperial Typewriters, Pre- and Post-Litton 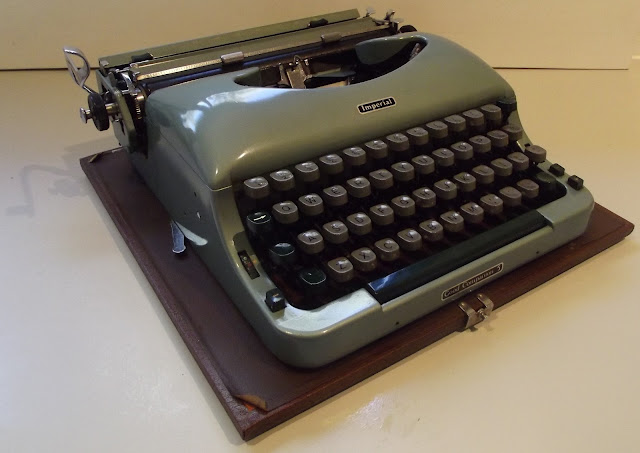 It would be an incredible experience to visit a typewriter factory today. Imagine how cool it would be to do that and then be given a free, brand-new portable typewriter!
More on that story shortly. In the meantime ...
Vikram Shah’s comment on my post about Ernest Hemingway and the Kansas City Star’s style sheet arrived just as I was sitting down to write about my friend Elizabeth Manning Murphy and her Imperial Good Companion 5 portable typewriter. 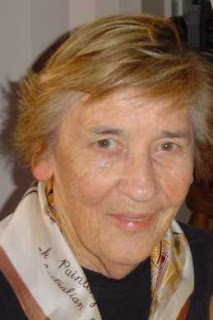 Elizabeth is one of Australia’s leading editors and an author on the art of writing and editing, so it seemed highly appropriate to hear from Vikram on these subjects.
“It strikes me,” wrote Vikram, “that many of the [Kansas City Star style] rules shown here seem not to apply to most of my high school English classes. Until AP composition my junior year, I was taught basically that longer sentences meant less headache at the keys and more pages to turn in. Nowhere in there was quality a huge concern. When my teacher suddenly told me that my writing was subpar, I quickly learned to write with meaning, with heart, with a correct prose style, and I believe it'll stick with me.” 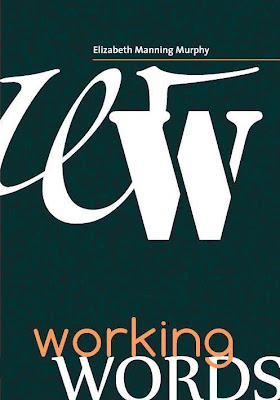 It’s a shame Vikram’s teacher hadn’t read Elizabeth Manning Murphy, president of the Canberra Society of Editors, which last August published Elizabeth’s much-acclaimed book Working Words: For Editors, Writers, Teachers, Students of English Grammar and Wordsmiths All.
Elizabeth had previously written such works as Effective Writing: Plain English at Work (1989),
Working Words is a collection of “chats” about aspects of editing and writing, many of which happened as a direct result of requests made to Elizabeth from working editors, would-be-editors and people who didn’t learn the “whys” and “wherefores” of English grammar at school. Chapters include “Punctuation: marks that matter”, “What is style?” and “The future of words”.
Elizabeth is a trained linguist, a consultant in communication skills, an editor and a trainer in effective writing. She is an associate of the Society for Editors and Proofreaders (Britain) and received the honorary award of distinguished editor from the Institute of Professional Editors, Australia, in 2008. She graduated with an honours bachelor’s degree in linguistics from the Australian National University in Canberra. 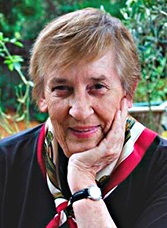 Paul Hetherington, of the Writing Program, University of Canberra, said of Working Words that it is a “very interesting and straightforward companion [Good Companion?] for people concerned with good written English and editing. It addresses important issues about style, grammar and punctuation, and combines these elements in a chatty, accessible and practical way. There's also very useful content about liaison and communication, which is especially valuable for beginning editors."
OK, so these are Elizabeth’s credentials. Now for her favourite writing machine: At the end of a guided tour of the Imperial Typewriter Company’s factory in Hull in the north-east of England in about 1961, Elizabeth and a friend were astonished to be given gifts of Imperial Good Companion Model 5 portable typewriters each. 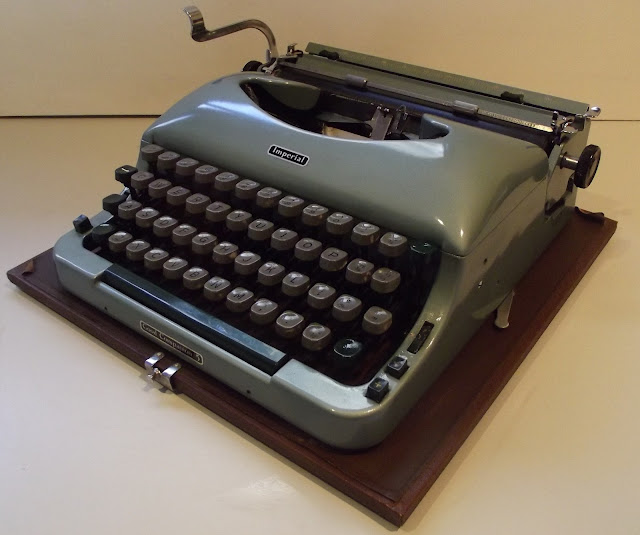 Elizabeth still has her IGC 5, 51 years on, and it’s much used but still in immaculate condition. The serial number is 5D 048, which suggests it was part of the remaining stock of a model about to be phased out for the Model 6 (introduced 1961).
Imperial had added to its original factory in Leicester, in the East Midlands, with the Hull factory in 1954. Hull was to be devoted to portable typewriter production while Leicester concentrated on the Imperial Model 66 standard-sized machine.
THE END OF IMPERIAL 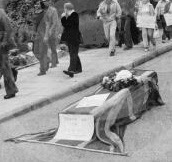 Fourteen years after Elizabeth’s visit, the Imperial typewriter factory in Hull was not such a happy, giving place. Litton Industries had announced on February 21, 1975, that it would close its Leicester and Hull typewriter factories, saying they were “unprofitable”. As workers filed home, a coffin draped in a Union Jack sat in the city’s streets, signifying the end of a once great typewriter brand. See.
On March 7, the Tribune magazine, Britain’s independent democratic socialist weekly, published an article by Ken Coates which was scathing about Litton’s tactics. It was a nasty business, with the fascist National Front having blamed striking Asian workers for the Litton decision. 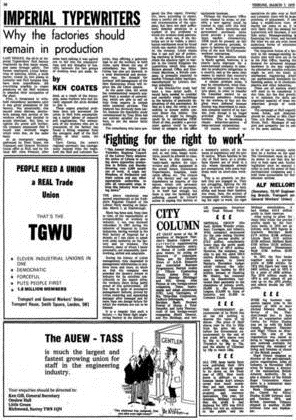 Trouble was truly brewing when, on Friday, February 28, workers staged a sit-in and talked of forming a workers’ cooperative to continue typewriter production in Britain. Unions and employees envisaged a “workers' self-management of the new enterprises which will replace the old Litton empire”.
Litton “did everything possible to create pressures on the Hull workers to abandon their occupation of the plant. First, it threatened to withhold redundancy payments until it was given possession of the factory. Not unnaturally, this caused some distress, particularly among that section of the workers which had decided to accept dismissal. But then, to tighten the screw still further, the company announced that it would also withhold wages which were due, on the same basis.” 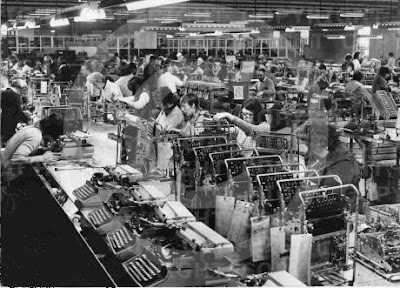 Imperial's Hull typewriter factory
The employees agreed “not to fall into Litton’s trap”, and some workers who had initially opposed the sit-in decided to join it. The Transport and General Workers’ Union commissioned universities in the area to carry out research on Litton’s financial position and its claims about the Imperial typewriter factories being unviable. However, the workers found these unsatisfactory. In particular, the workers demanded to know, “if the factories are to be viable, a distribution mechanism must be found which can market their product. At the moment, Litton thinks that it can pull out of producing machines in Britain, and yet retain the absolute right to market in the United Kingdom the typewriters which they manufacture abroad. Office and Electronic Machines (OEM), a British company, is presently expected to market Triumph-Adler machines, manufactured by Litton's German subsidiary. 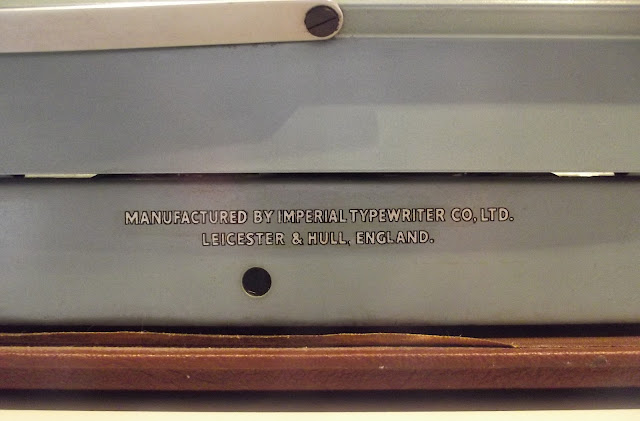 “If the Urwick-Orr study had been a true social audit, it would have needed to consider and carefully weigh such things as the balance of payments implications of this assumption. Be that as it may, the union is now seeking to arouse public concern about this matter. One solution, it might be thought, could be to nationalise OEM. Short of that, possibly a government agency could be established to compete in the office equipment business. Perhaps the Stationery Office could expand its scope, or possibly a new agency could be created to cope with this field of work. Public enterprise and government purchases alone could provide a very serious basic market.
"Alternatively, OEM could be pressed, on balance of payments grounds, to agree to become the representatives of the new Hull-Leicester workers' enterprises. Whatever the solution which is finally agreed, however, it is clearly quite improper for a trans-national company to abandon its productive obligations to a country, and at the same time expect to exploit that country's markets unhampered in any way.” 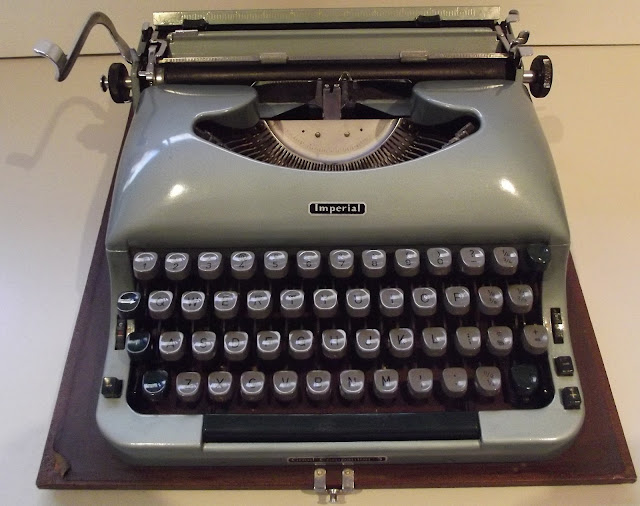 “Of course, if workers' cooperatives do take over at Hull and Leicester, there will be large problems of adjustment. If one takes a middle-term view, of maybe 10 years or so, it is very likely that the demand for typewriters will decrease, if not fade away. Message-sending is by-passing the letter, and beyond the telex we can see even more audacious forms of electronic communication.
“The long-term future of a factory in the message-sending industry may well turn out to be in the [British] Post Office, meeting the demand for advanced message hardware in the late 1980s. An alternative possible evolution might be into the kinds of mechanical engineering which use sophisticated keyboards for blending paints, or in chemicals plastics and other industries.
“These are all matters which will need to be considered in due time, but the first priority is to maintain the skills and organised capacity of these two important groups of work people.”
The campaign in Hull was calling for the urgent donation of funds from the public. 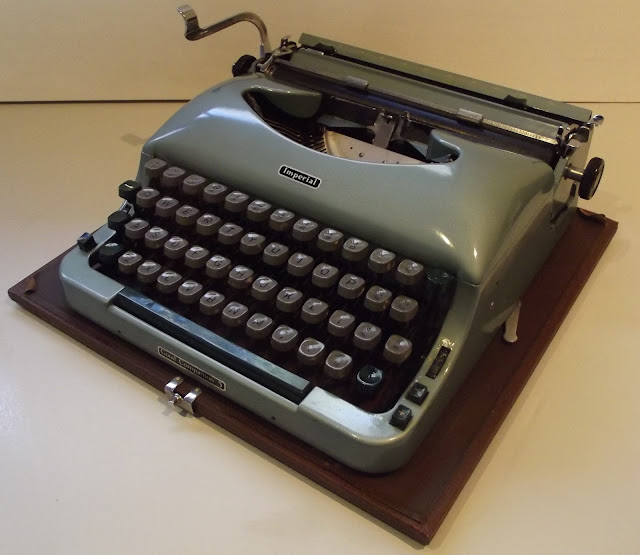 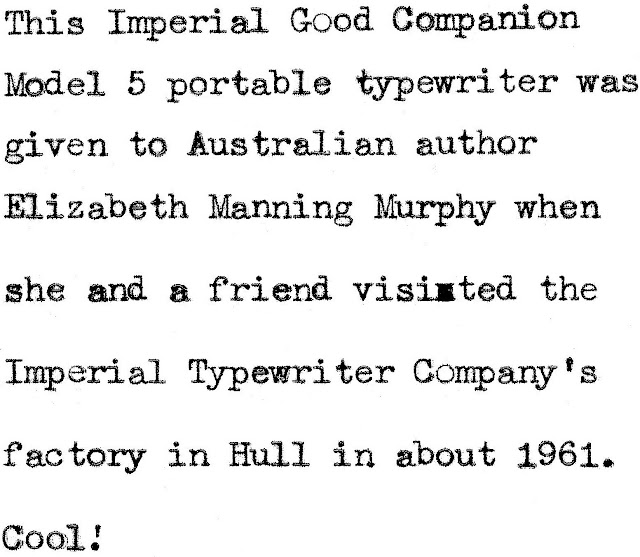 First time I heard of the Imperials. Looks like it is one hefty typewriter. Litton or not, eventually there would be no more typewriter factories.

What a fabulous gift that was! As I noted not too long ago on my own blog, the GC5 is a first-rate typewriter.

This is an interesting and sad story about the end of Imperial. "Message-sending is by-passing the letter, and beyond the telex we can see even more audacious forms of electronic communication." -- That was prescient, but I wonder what they meant specifically by "message-sending"?

I suspect that "message-sending" simply refers to any form of long-distance communication.

I miss the idea of sending letters and postcards. It seems that so much is already communicated in emails and phone calls, there's not much left to be said in a letter. Even soldiers on the battlefield, who seemed to be the last people without access to any other form of communication besides letters, are now using email and cell phones. The personal letter seems largely dead... Boy, was that a digression, or what?

GC5 is, by a mile, my favourite thoroughbred machine. It oozes finesse. And thanks for shedding some light on the plight of the Hull factory closure.

Definitely a looker! Oh, to tour a typewriter factory, let alone be given one as a gift at the end of it. Quite a story. Just picked up a GC1 myself, and if these are anything like the one I have...well, it is both attractive and functionally to die for. 19

Thank you Bill, Richard, 'Stream', Rob and Ken for your comments.
Yes, the end for Imperial must have been a sad time, and judging by the various schemes discussed, these workers must have been desperate to come up with some way of staying in a job. Could message-sending relate to typewriters or like machines still be used for cables and telegrams?
It is interesting to note the various Labour Party-union officials involved, including Tony Benn.
The most interesting aspect to me was Litton saying it would meet Britain's needs for typewriters through a British distribution company for Triumph-Adler, and "the balance of payments implications". SCM and Olivetti were still making typewriters in Britain at this time.