The Olympia Model 4 Typewriter - in Green!? 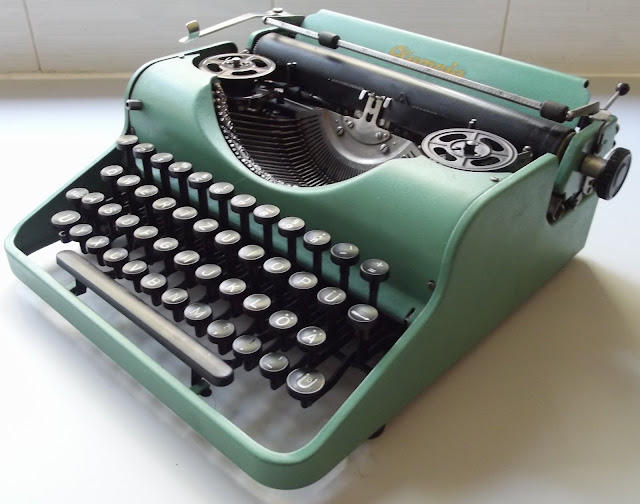 I got a warm and fuzzy feeling from Peter Baker’s comment two weeks ago - in connection with Rowan Henderson’s growing collection - in which Peter said that many of my typewriter encounters have turned out to have good “back stories”. That certainly seems to have been the case of late, especially in relation to typewriters that have been owned by, or are still being used by, exceedingly interesting ladies. 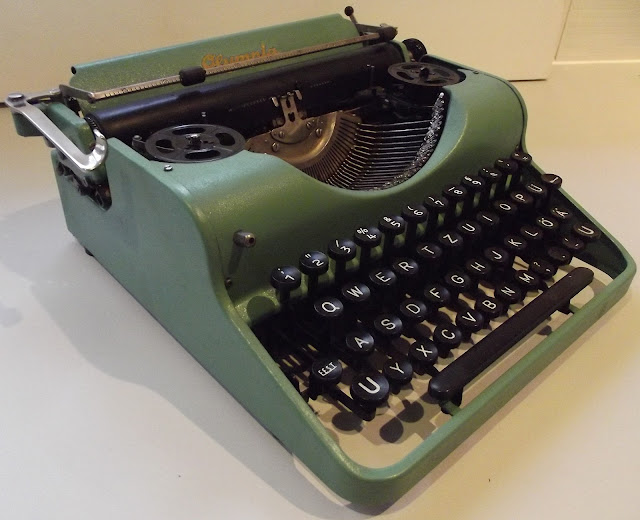 I was also delighted with the comments from Peter (Manual Entry), as well as Anna Strad (A.R.M.S., A Machine for the End of the World) and Ken Coghlan (Swinging Typebars), regarding my new old friend Eva. I met up with Eva again for lunch on Friday and handed back her fully serviced Baby Empire, with which she is thrilled. Yes, Ken, the ribbon spools on it are now the right size, so Eva can now type away on it with the “gull wings” closed. 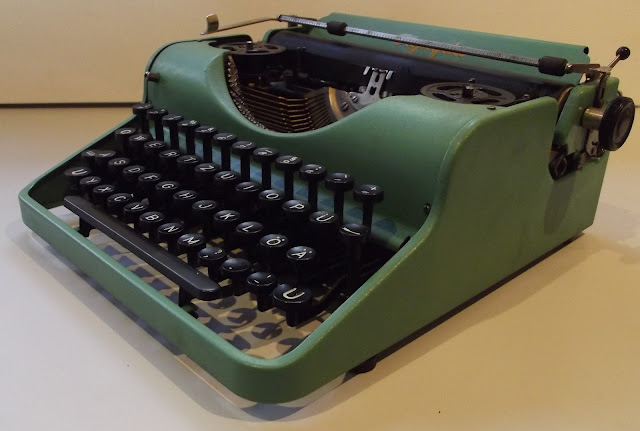 Here’s another intriguing “back story” regarding an old lady’s typewriter, which I now own. 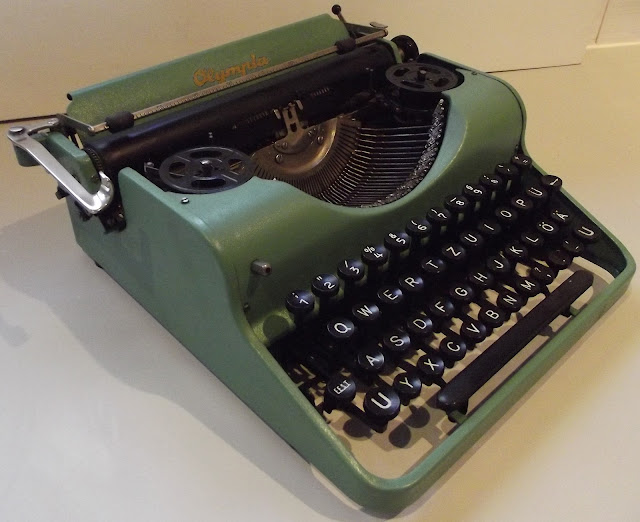 On the Monday before my typewriter exhibition opened at the Canberra Museum and Gallery, curator Rowan Henderson and her team were laying out typewriters ready to place them in their display cabinets. 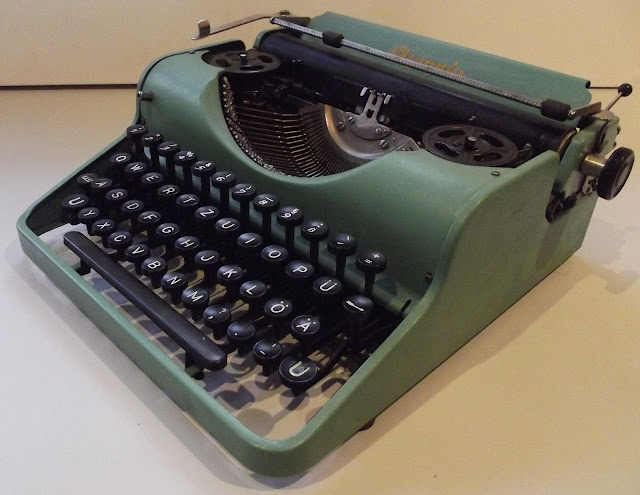 There was a tap on the glass doors and one of the staff members went to talk to the elderly lady who was peering in at the array of machines. 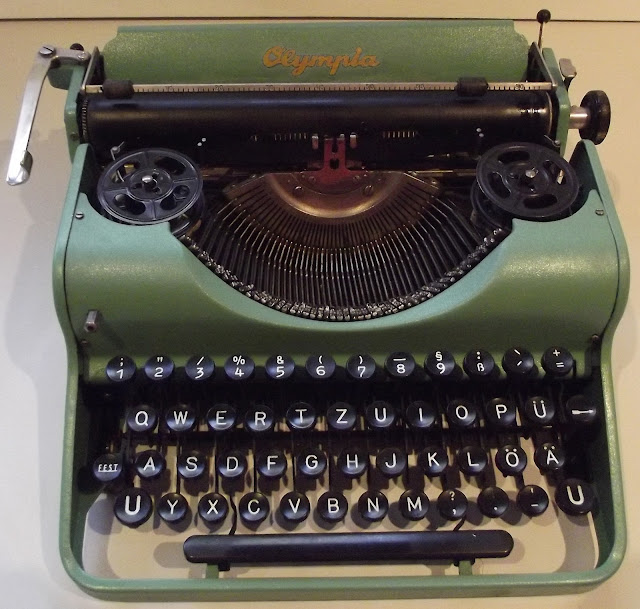 The lady’s name is Christel Stahl.
Christel, who is 84, wanted to get in contact with me because she had an old Olympia portable typewriter she wanted to add to my collection. 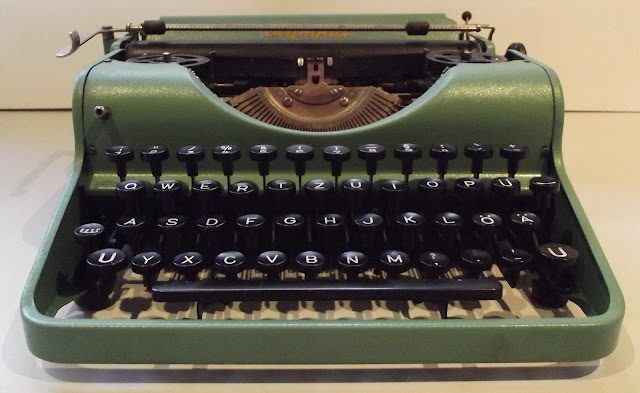 I visited Christel at her home in Canberra the Friday evening before the exhibition opened. 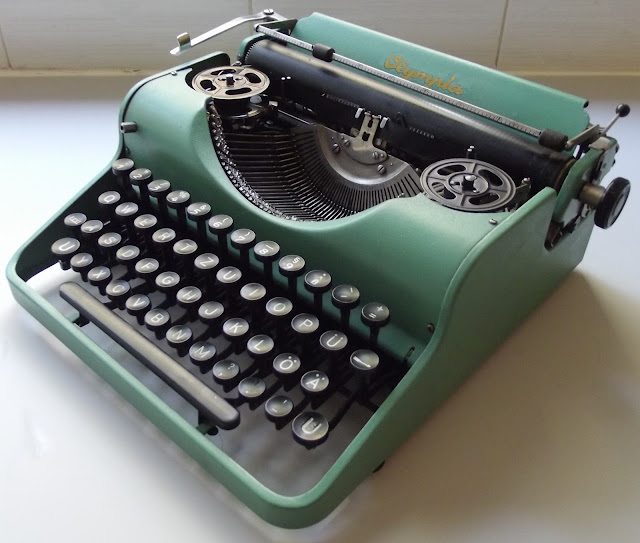 The first thing that struck me about her typewriter was the unusual way in which the case locked – the clasp folds from the front edge underneath the base of the case. 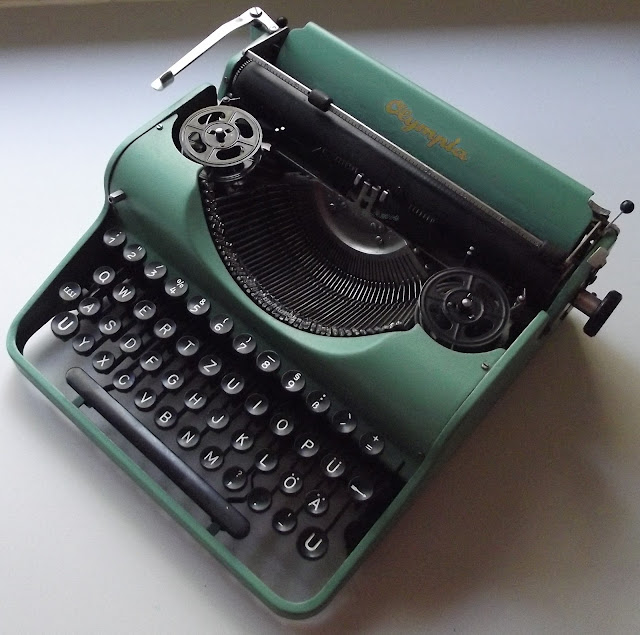 The second thing was the green colour of the portable. I own an early model Olympic Simplex, from the 1930s, but this, like other variations on the Olympia Model 4 I have seen (mostly from the late Tilman Elster’s collection, and featuring on the European Typewriter Project website put together by Will Davis) are a shiny black. 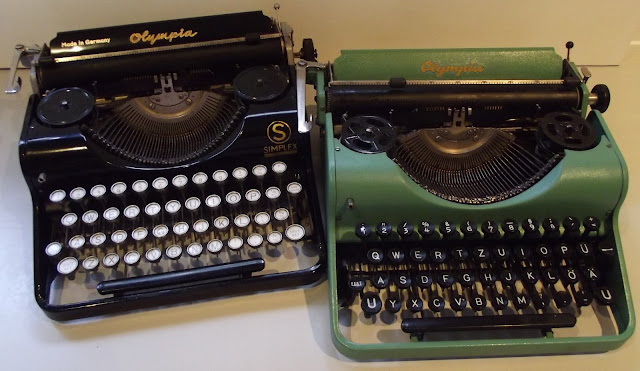 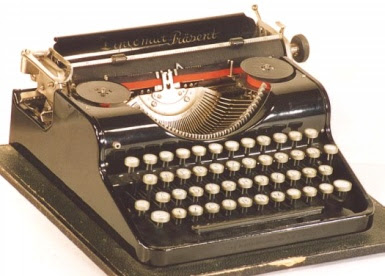 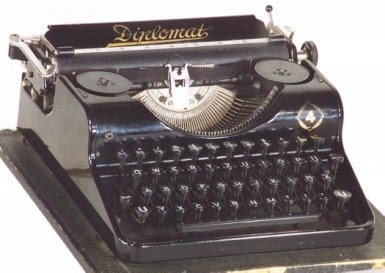 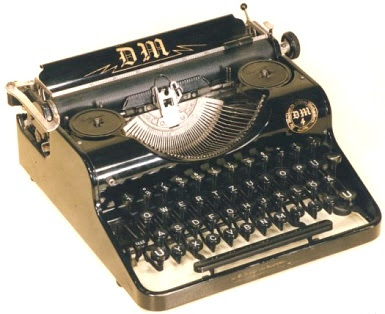 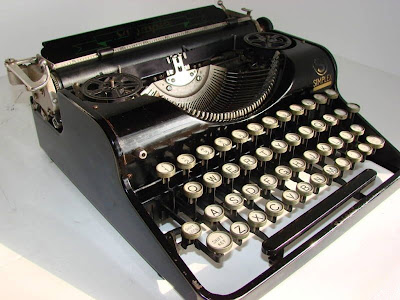 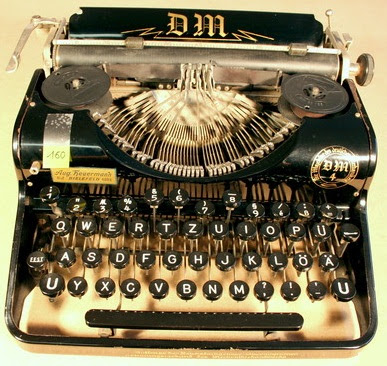 This machine is from Wim Van Rompuy's Collection
Upon taking Christel’s machine apart to clean out the lint-laden workings (I’ve never seen such a dense accumulation!) I noted that the green paintwork appeared to be the machine’s original colour. Everywhere, that is, except for the two side edges of the back plate; these “lips” slide in behind the mask’s main frame. These are a shiny black. Suspicious? Not necessarily.

Christel told me the story of her typewriter. She had bought it second-hand in the Russian zone of Berlin in 1951. 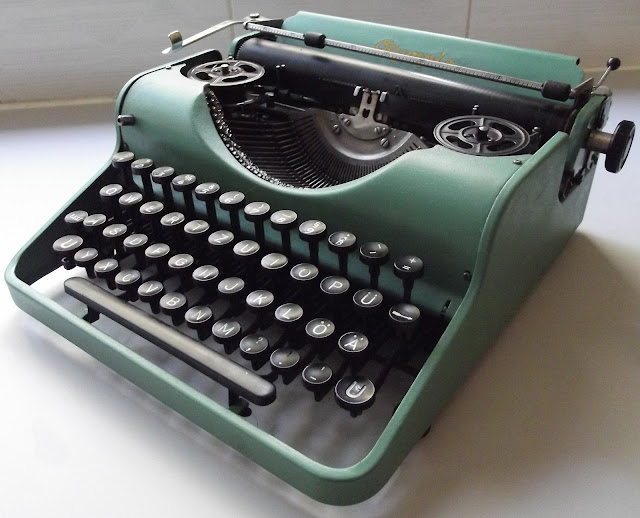 Her father, the botanical scientist Professor Karl Otto Müller, who had got out of Germany before World War II and taken up a position at Cambridge University in England, had organised for Christel to escape East Berlin while she still could. 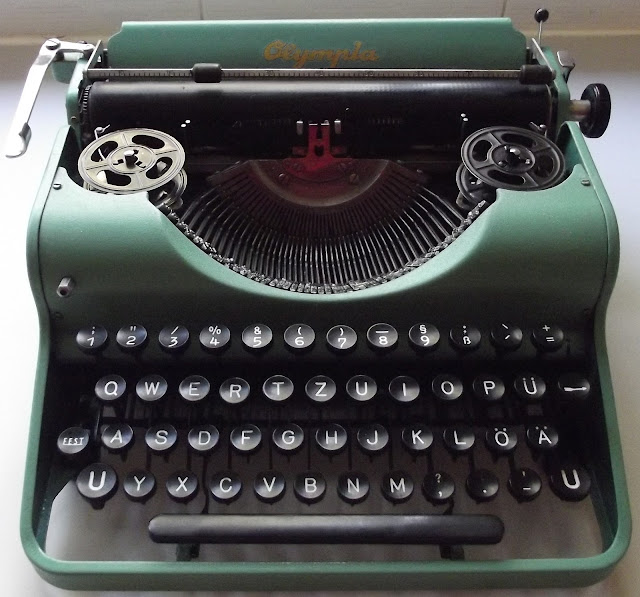 Professor Müller had received an offer to work with the  Commonwealth Scientific and Industrial Research Organisation (CSIRO) in Canberra and was preparing to move to Australia. He had demanded that his daughter be allowed to travel with him, as a £10 migrant, when he set out to start a new life Down Under. 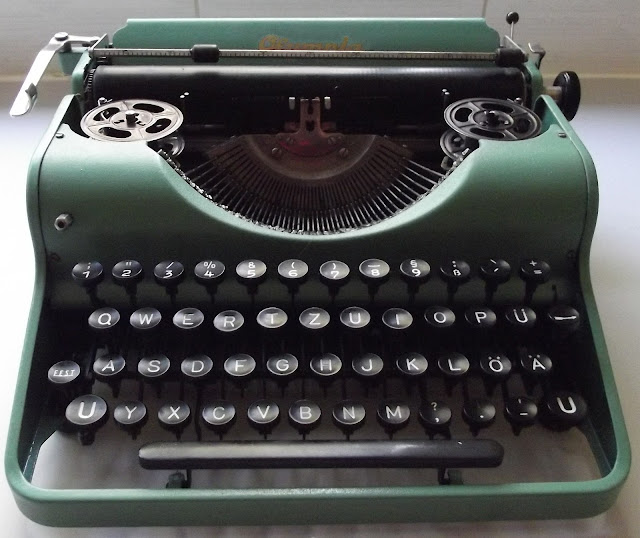 As Christel made preparations to join her father in Cambridge, she and a female friend went shopping for the things they believed Christel would find essential in the West. The friend had advised Christel that if she had a typewriter, she would be guaranteed of finding work in England and Australia. 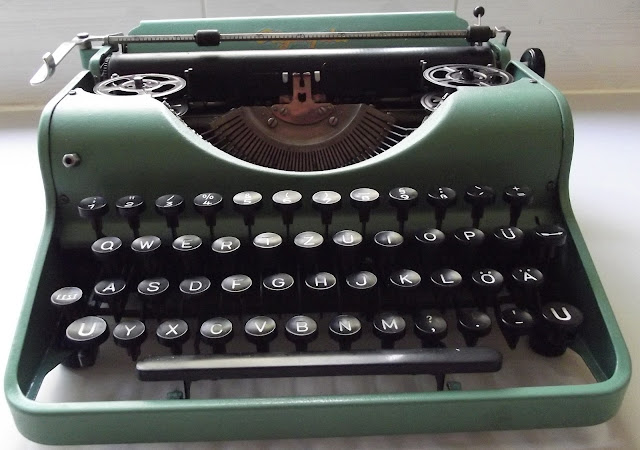 Thus they found the Olympia and paid a relatively small amount of money for it, and Christel took it with her to Cambridge and then brought it on to Canberra. 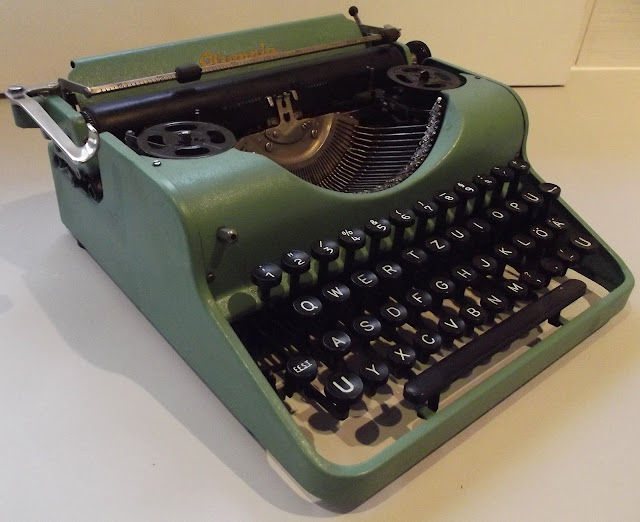 Here in Australia, Christel and her husband found much work for the Olympia, but for many years it had been stored away in a cupboard. That is, until Christel took it out to show me. 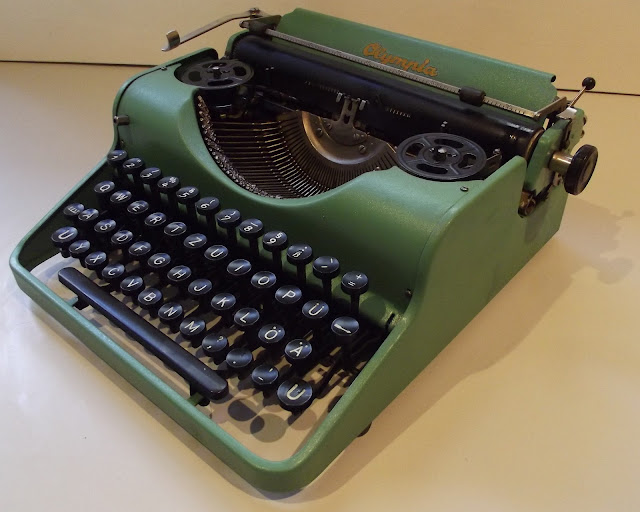 Given this machine’s unusual history, I am guessing it was possibly refurbished by Olympia during the company’s immediate post-war years, while its factory was still in Erfurt. The Soviets took over this factory at the end of the war, while Olympia was re-established in West Germany. After action in the International Court of Appeal in The Hague, typewriters coming out of Erfurt had to be relabelled Optimas, starting in 1951, the year Christel bought her Olympia. 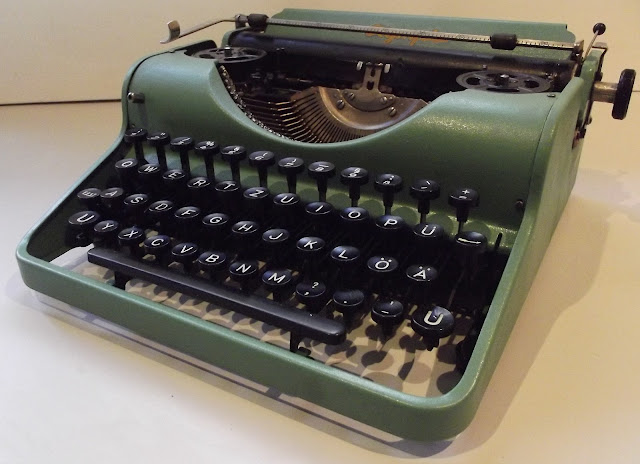 The paintwork on the green Olympia suggests to me that this is a factory re-paint job – other than that, it must be its original colour. Perhaps some spare parts from earlier models were used and repainted (the back plate is green on both sides). This is certainly no amateur repainting, it has all the hallmarks of factory work. 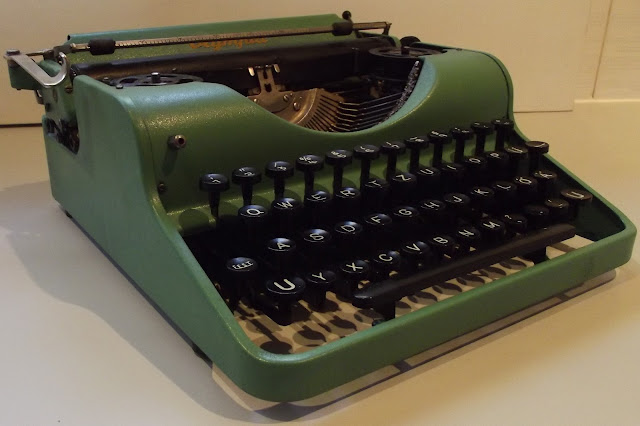 After leaving Cambridge, K.O. Müller joined the Microbiology Section of the Division of Plant Industry at the CSIRO here in Canberra in 1953. A graduate of Berlin, he worked on the mechanisms involved in disease resistance in plants and studied responses of the seed cavity of French bean pods to spores of the peach pathogen, Monilinia fructicola. 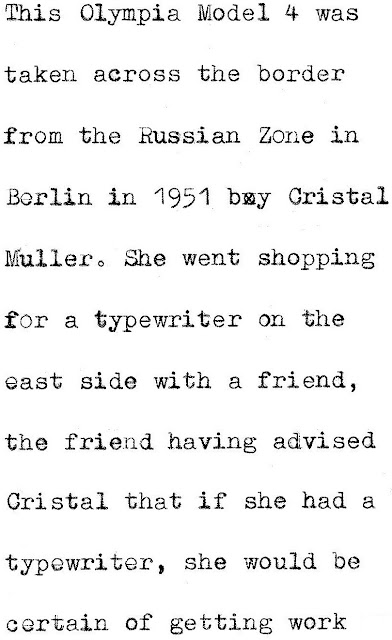 Posted by Robert Messenger at 12:19

That is a very interesting story. Trying to guess the back story behind a machine is fun. Having the full, rich history is just great!

I wonder if that could be what Optima green looks like over black instead of a light primer or aluminum? Here is mine for reference: http://vintagetechobsessions.blogspot.com/2011/09/say-hello-to-svetlana-optima.html

Thanks Peter and Dwayne. The idea of slipping away as the Iron Curtain descends, with a typewriter under one's arm, appeals to me. But I can't explain why buying a typewriter before leaving the Russian zone was so important. Christal still has a very strong German accent after all these years, but it seemed to make sense to her to buy one.
Yes, Dwayne, on the inside of the frame, where the green paint gets a bit thinner or has worn in parts, there appears to be a thin black undercoat between the green and the metal. So I think that's a distinct possibility.
That's a lovely looking Optima, by the way.

What an amazing story! That could be the plot for a short story or even a novel worth of the next NaNoWriMo!

Svetlana sends her grudging thanks for your compliment. Be sure to look up her new ribbon day and Svetlana's Rule for Survival. That is one paranoid Cold Warrior.

Indeed a good "back story."

It's an attractive color and your theory of a factory repaint sounds right.

What a story! You meet the most interesting people in all of typewriterdom, Robert! Original color or not pn that typer, I love it, as green is my favorite. I'm also quite fond of those huge 'U' keys.

And thank you for the kind mention!

Unbelievable to find here an article about a typewriter that once belonged to my australian relatives. And so I learn something more about the history of my family by this coincidence. Thanks for your blog. Dirk W. from Germany.