The Curator who is a Typewriter Collector's
'Good Companion' 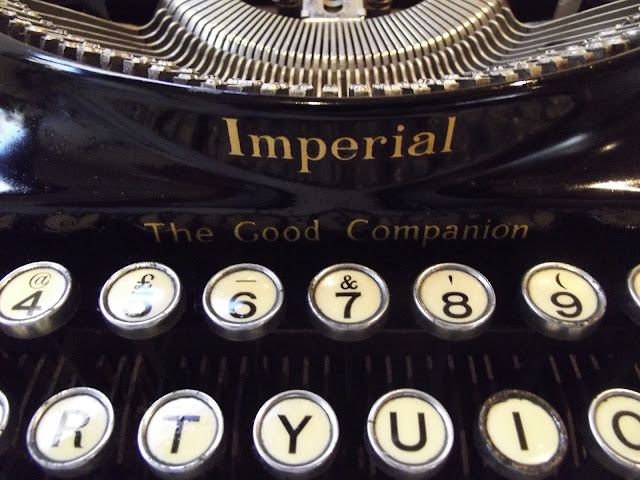 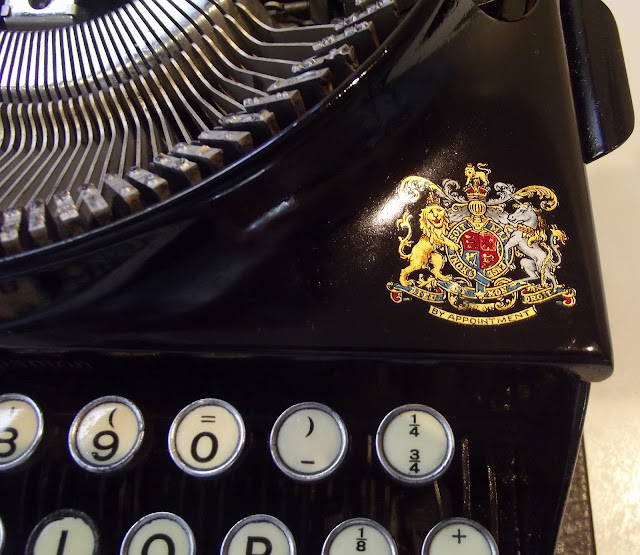 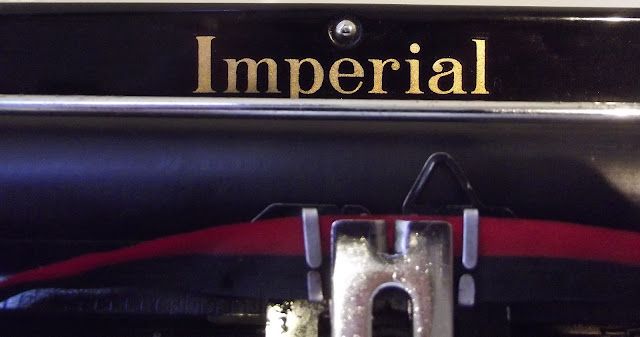 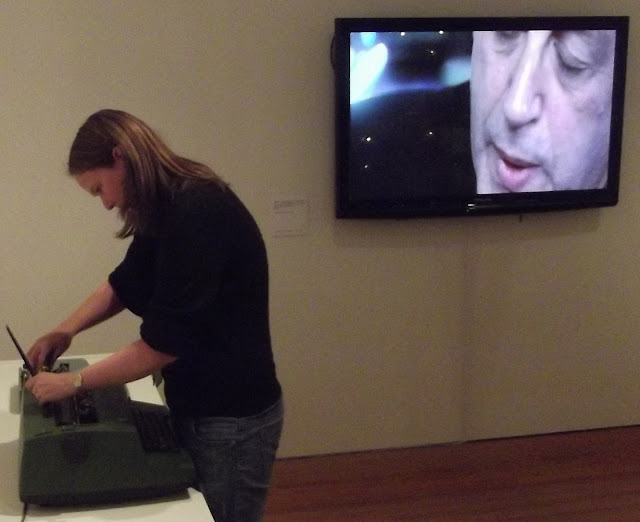 When Rowan Henderson first contacted me about staging a typewriter exhibition at the Canberra Museum and Gallery, she readily admitted she knew very little about typewriters.
That was at the end of November last year. In the intervening seven and a half months, Rowan has developed a considerable interest in typewriters, and knowledge of their history.
After all, at least for the past five and a half months, she has been dealing with them – and me! – on an almost daily basis.

Rowan, a curator of social history at the museum, would have been readily forgiven for allowing herself some respite from typewriter talk when seven weeks ago she took a break from work to visit her parents on Queensland’s Gold Coast.
But no! Rowan remembered that her parents still had the typewriters which had belonged to her grandfather and her great-grandmother. 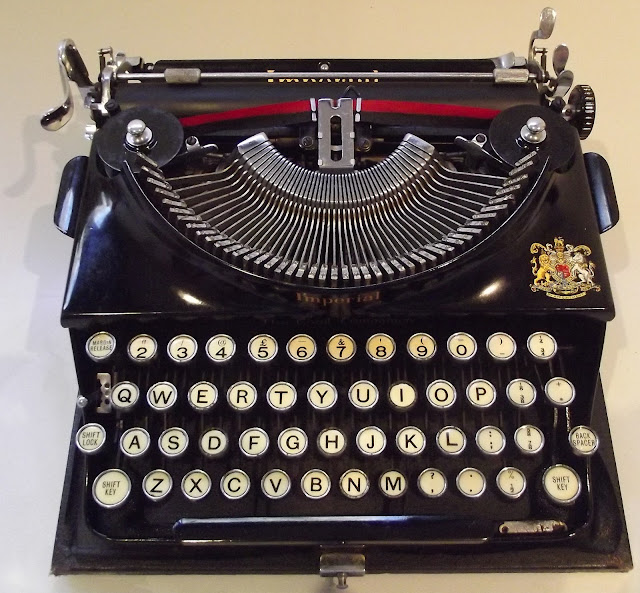 Sure enough, these beautiful old machines were dug out, dusted off, and in the case of her grandfather’s 1937 Imperial Good Companion, the machine was brought back to Canberra for some servicing from me. 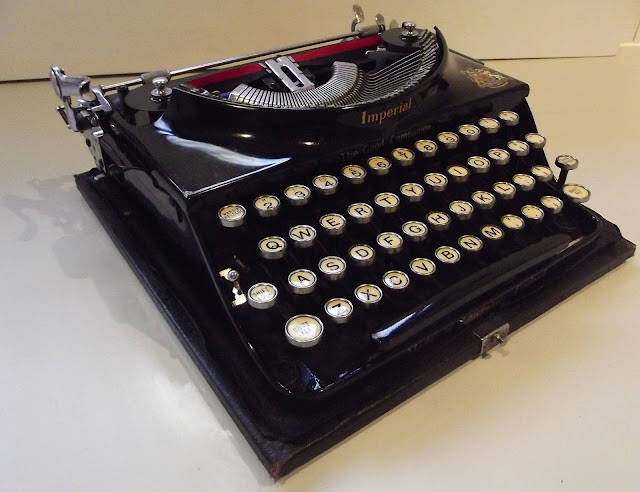 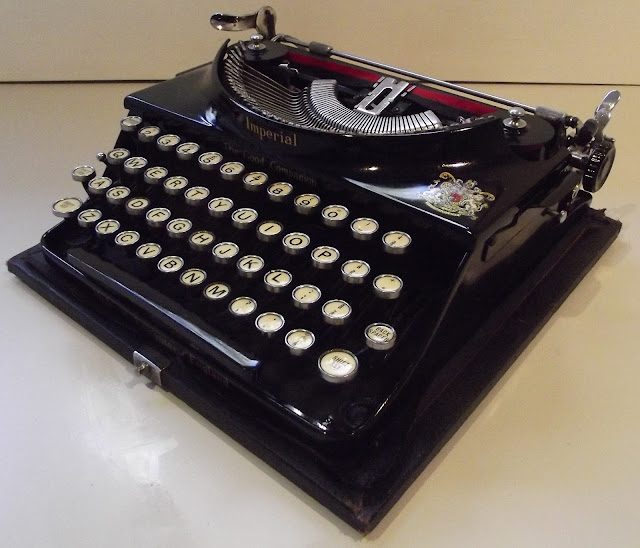 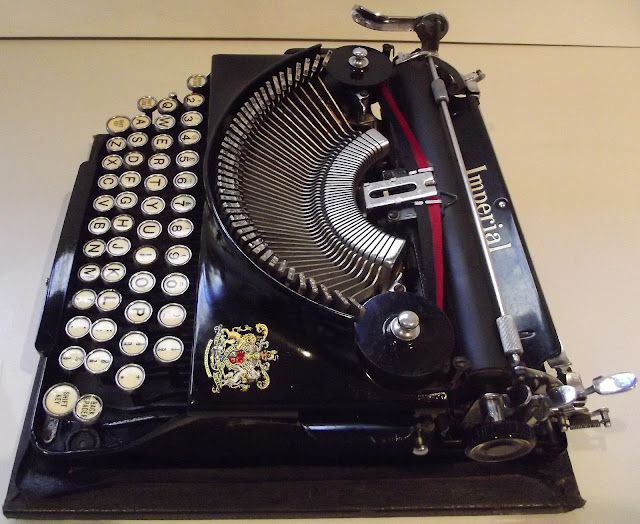 So impressed was I with Rowan’s growing interest in typewriters, I presented her, as a way of saying thanks for all the brilliant work she has put into this exhibition, with a Remington 5. 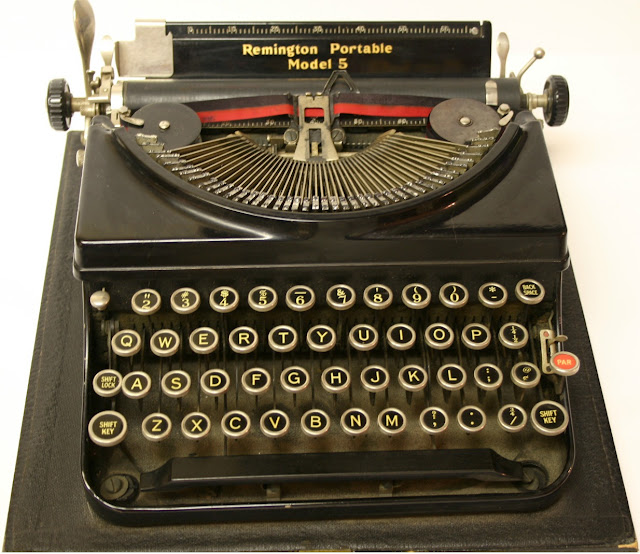 The family believe Rowan’s great-grandmother probably bought the little Underwood 3 when she was in the US working with the League of Nations. 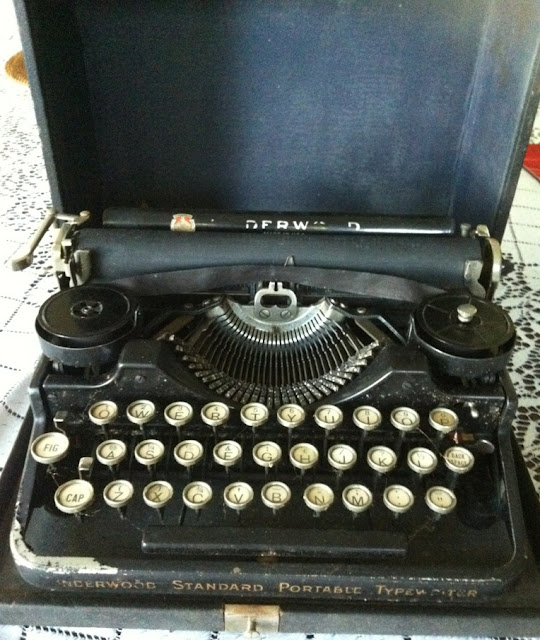 An article on Rowan’s great-grandmother, Isabella Leitch, appeared in the International Journal of Epidemiology, written by John Pemberton, who had first worked with Isabella at the Rowett Research Institute in Aberdeen, Scotland, in September 1937.
“Isabella Leitch was a remarkable woman,” the article opens.
“Isabella Leitch had spent the 1914–18 war carrying out research in genetics and plant physiology at Copenhagen University with Professor August Krogh, a Nobel Prize winner in medicine, and she had obtained her DSc at Aberdeen University in 1919 on the basis of published and unpublished papers. 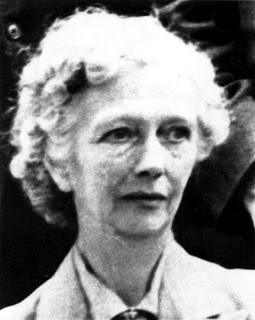 “In spite of the fact that she was, by then, an experienced research worker, she was unable to find a research post in Aberdeen. At length, in 1923, she found a job as temporary librarian at the Rowett Research Institute.
“She soon found herself involved in various research programmes, first in animal nutrition and later, when the Institute became involved in human nutrition, in that area too. Her encyclopaedic knowledge and sharp critical mind made her a key figure and she became adviser and personal assistant to the director, John Boyd Orr.
“In the 1930s, the signs of specific nutritional diseases such as scurvy, rickets and pellagra were well known, but there was little agreement on the early symptoms and signs of malnutrition. Certain changes in the skin, anaemia, defective night vision, increased frequency of infections and slower rates of growth were suspected to be signs of malnutrition and we looked for these.
“Angus Thomson and I often consulted Dr Leitch (as we always called her), and she was able to give us valuable advice on what was worth looking for and measuring in the children we were going to examine. One such piece of advice she gave us, which has turned out to be very significant, was to measure leg length as well as total height ...
“Although I occasionally experienced her severe criticism, as when she returned the draft of an article I was proposing to send to The Lancet blue pencilled all over, I remember her with respect and affection. She was one of those scientists whose honesty, knowledge, high standards and willingness to help the less experienced workers, enhance the reputation of an entire research institution.”
Posted by Robert Messenger at 13:45

You find a story around every corner. This is why I love your blog.

Those two typewriters look like they are brand new. Very nice work. The story is very interesting. I do not know where you find all the information. Keep up the great work and best of success with the exhibition.

Very nice to have a new convert to typewriters.

This is a great story indeed, thanks.
The exhibit is so exciting, really wish I could fly to Australia right now. All best, Robert.

Good for Rowan, and good for you. That Good Companion looks immaculate!

The IGC looks fantastic, thanks so much Robert! :)

Aberdeen? As in Aberdeen, Maryland? Nice. I live so very close to there, and I believe I drove through there this past weekend...on the way back from picking up my Imperial Good Companion, nonetheless. Rowan's GC is so amazingly beautiful. I hope to own one of these older models sometime soon. It's great to hear that her family's typewriters will live on through her.

Oh Ken. Definitely not Maryland. Aberdeen, Scotland! Thanks for your lovely comments.

Interesting post as always. You always manage to find a good back story

Oh...I heard Aberdeen and instantly thought Maryland. Not sure why, all things considered, but it seemed like a large coincidence, what with the IGC and all. You have a very nice typewriter there, Rowan. Put it to good use!

5700I've recently got hold of a imperial The Good Companion typewriter and the serial number is AR453. The interesting thing is that it has a Blue Star Line Southampton label on it. I'm wondering how old this actually is and where I can find more info.

Hi recently just got hold of a Imperial The Good Comapnion Typewriter serial number A453. It has a Blue Star Line Southampton label on the base of the case. I'm wondering how old this and where I can find out more about it.

Thanks Robert, is that quite an early one then? Andyd