Days of Oz and Roses The Oz masthead and at least one rose (or is it an Oliver carnation?)
One thing all Australian media commentators were agreed upon on the TV news tonight: "Rupert doesn't take 'No' for an answer". They were talking about US media giant Time Warner's rejection of an initial $80 billion takeover bid by Rupert Murdoch's 21st Century Fox. 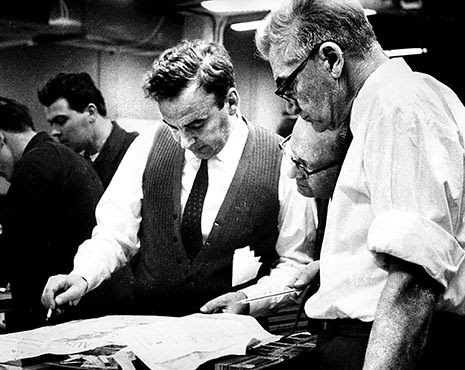 Rupert Murdoch checks page proofs with his editors on "The Stone" of The Australian in Canberra in July 1964.
The first time I ever encountered Murdoch was in the sports newsroom of The Australian, Australia's national daily newspaper, on Holt Street in Surry Hills, Sydney, in late 1969. He didn't take "No" for an answer then, either.
Murdoch unexpectedly walked into the room, apparently rather agitated about something or other. As he headed through our area to the editor's office, he passed a group of six young journalists sitting around an old Bakelite radio, listening to a broadcast of the Canterbury horse race meeting. Murdoch momentarily hesitated, leaned over, switched off the radio, and said, "You blokes have got work to do." 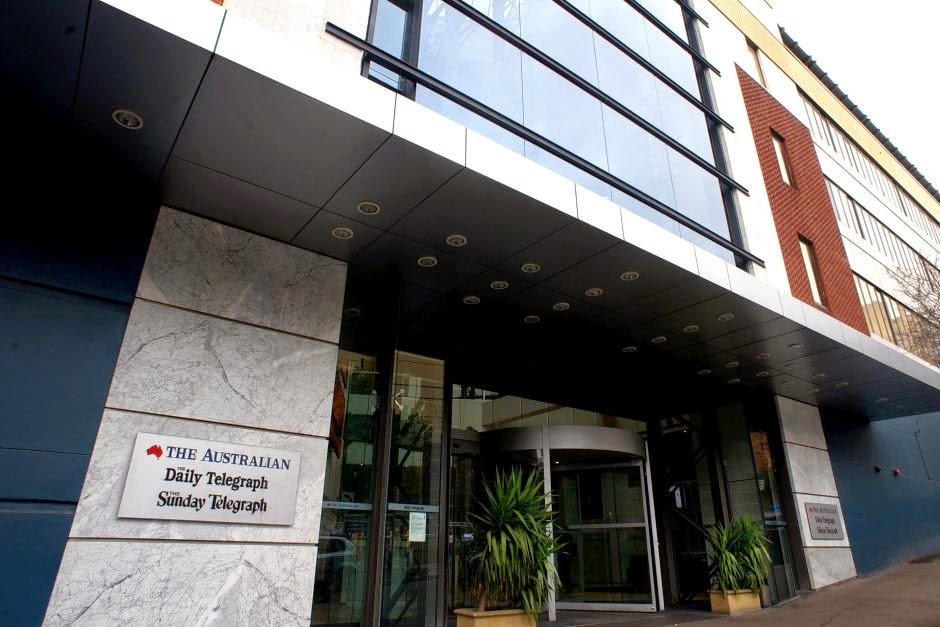 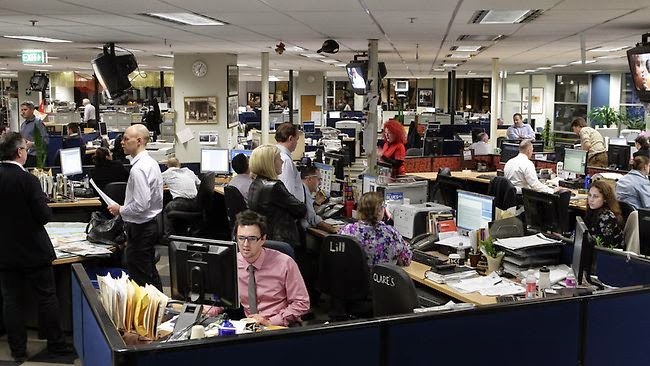 One of the group, a tyro from the adjourning section who obviously didn't know Rupert Murdoch from Ronnie Biggs, instantly turned the radio back on, saying, "It's OK, mate, I'm from finance." "You were from finance," said "Uncle Rupe". The finance reporter was sacked on the spot.
Murdoch had a reputation for this sort of thing.  One knew to sit up and take notice of his every command. When the launch of The Australian was being planned in Canberra in 1964, Murdoch turned up, again unexpectedly, and called a heads-of-sections meeting. "If we decide to bring the launch date forward, and go to press with this thing tonight," said Murdoch, "I want to know that you're ready. What have you got?" 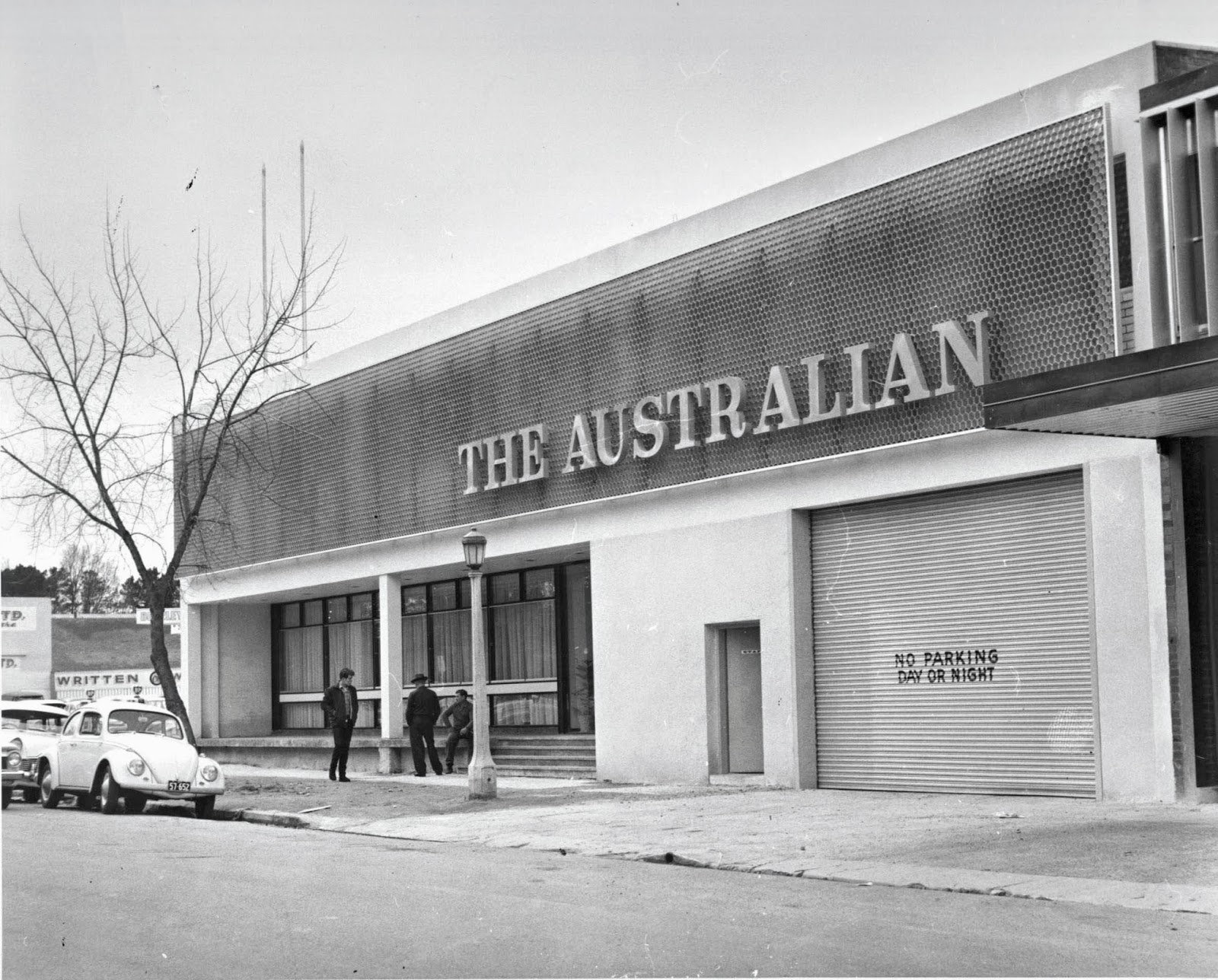 The Australian's first headquarters, on Mort Street in Canberra in 1964.
Duly the various editors went through their news lists, suggesting possible lead articles and layouts. But when it came to sports editor Morrie Carr, Morrie held up a blank sheet. "What's the meaning of this?" asked Murdoch. "Well, Rupert, sports happens of an afternoon. I won't know what I've got until about 5.30." Morrie was sacked, too. He didn't even make it to the first edition. 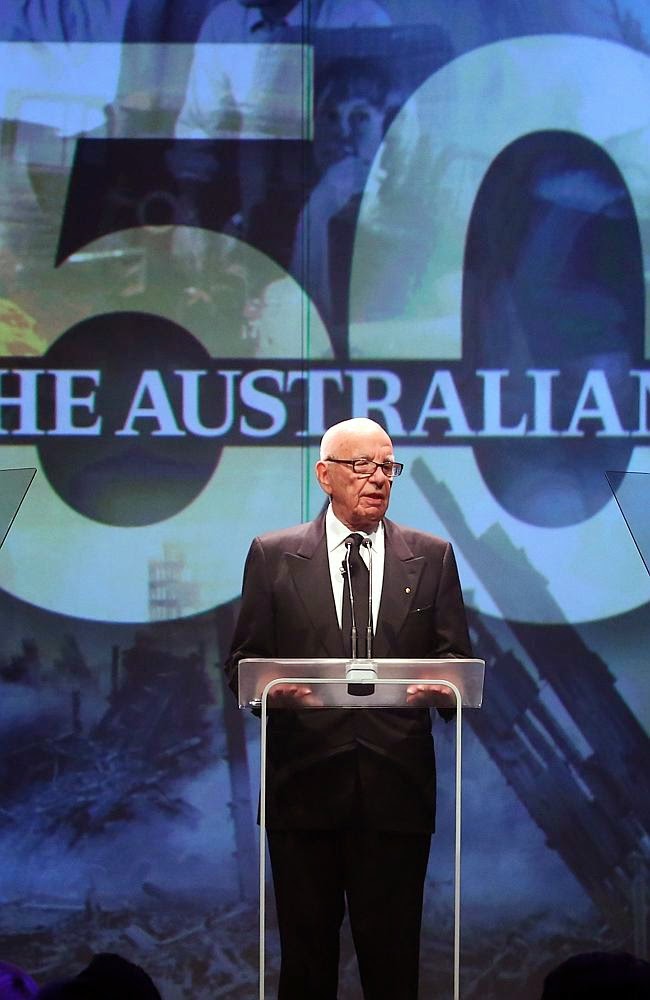 The Australian was actually launched a short time later, on July 15, 1964, which means it has been celebrating its 50th anniversary this week. When it started, it was based on Mort Street in Canberra, quite close to The Canberra Times (the inner city area is now known as "Times Square").
Establishing a national daily in a country as vast as Australia set Murdoch some enormous challenges. Canberra's winter weather - blanketing the city then as it does right now, in a foggy covering so dense it would make any "black-out" obsolete - didn't help Murdoch's cause. He recalled this week standing on the tarmac at Canberra airport in his pyjamas at a freezing 3am, trying to persuade pilots to ignore the fog and fly his page plates to his presses in Sydney to be printed. In 1967 he moved The Australian's headquarters to Sydney, where it remains. 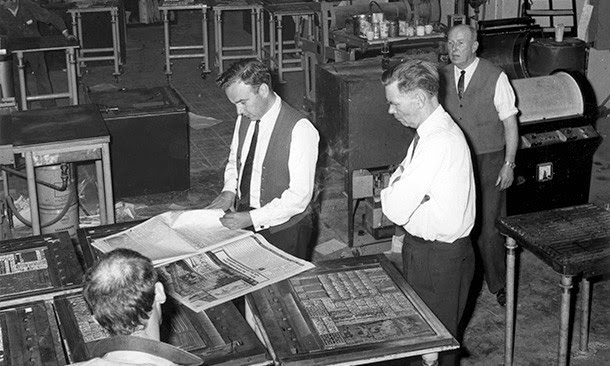 Murdoch checking a broadsheet newspaper hot off the presses.
The year before, 1966, Murdoch was able to achieve the technology breakthrough that made The Australian a true national morning daily on a continent 2500 miles wide. Pages were made up in the traditional hot metal form (in formes), but then a high-quality page proof was pulled on bromide paper and the proof was transmitted as a facsimile over Telecom lines to print sites in Melbourne, Sydney and Brisbane. This was later widened to include Adelaide and Perth. Thirty years before the onset of modern remote-site printing through digital processes,  Murdoch had the most sophisticated satellite printing system in the world. 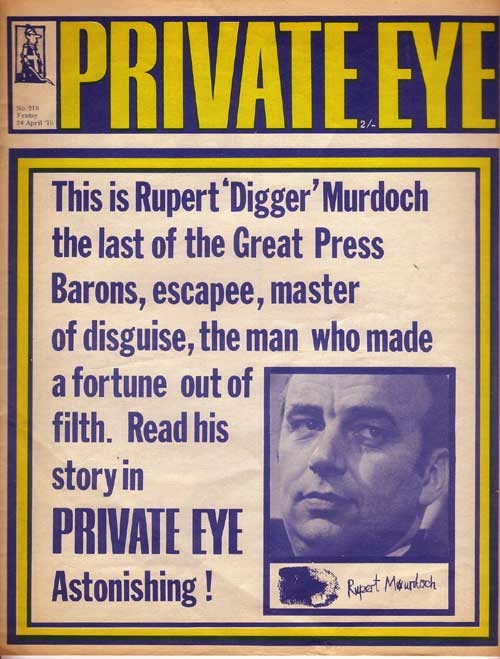 I first heard about Rupert Murdoch and his ambitions in 1967, when I was working for The New Zealand Herald in Auckland. Two years later, I was working the man who had come to be known in England as "The Dirty Digger":

The Australian's first editor had been the irascible Maxwell Newton, who was succeeded within a year by Walter Kommer. By the time I arrived, Adrian Deamer was well ensconced. He was a good editor, but became rather embittered after his sacking. During Deamer's absences, it was a far greater pleasure to work under his deputy, Alan Ramsey. But when Deamer went, Ramsey wasn't elevated. Instead, under Deamer's  replacement, Bruce Rothwell, the paper slid backwards. Then came that unforgettable larrikin, Owen Thomson, one of the best editors I have ever worked with. It was a memorable experience, too, to work with such great journalists as war correspondent Pat Burgess, Phil Cornford and George Williams. 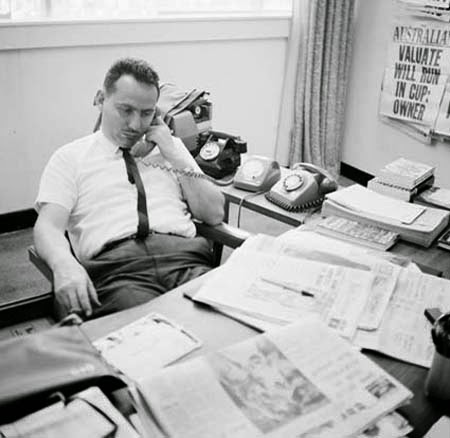 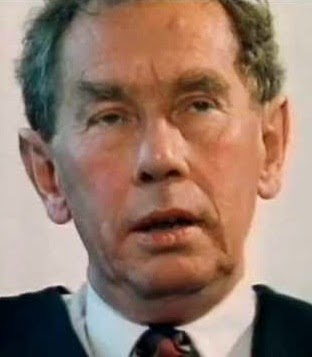 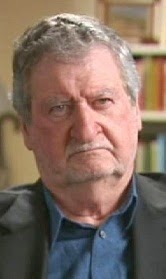 Phil Cornford
In the background of the photo above of Kommer at work in Canberra in 1965 can be seen the model of typewriter we all used at News Ltd in Sydney during my time there, the Remington International: 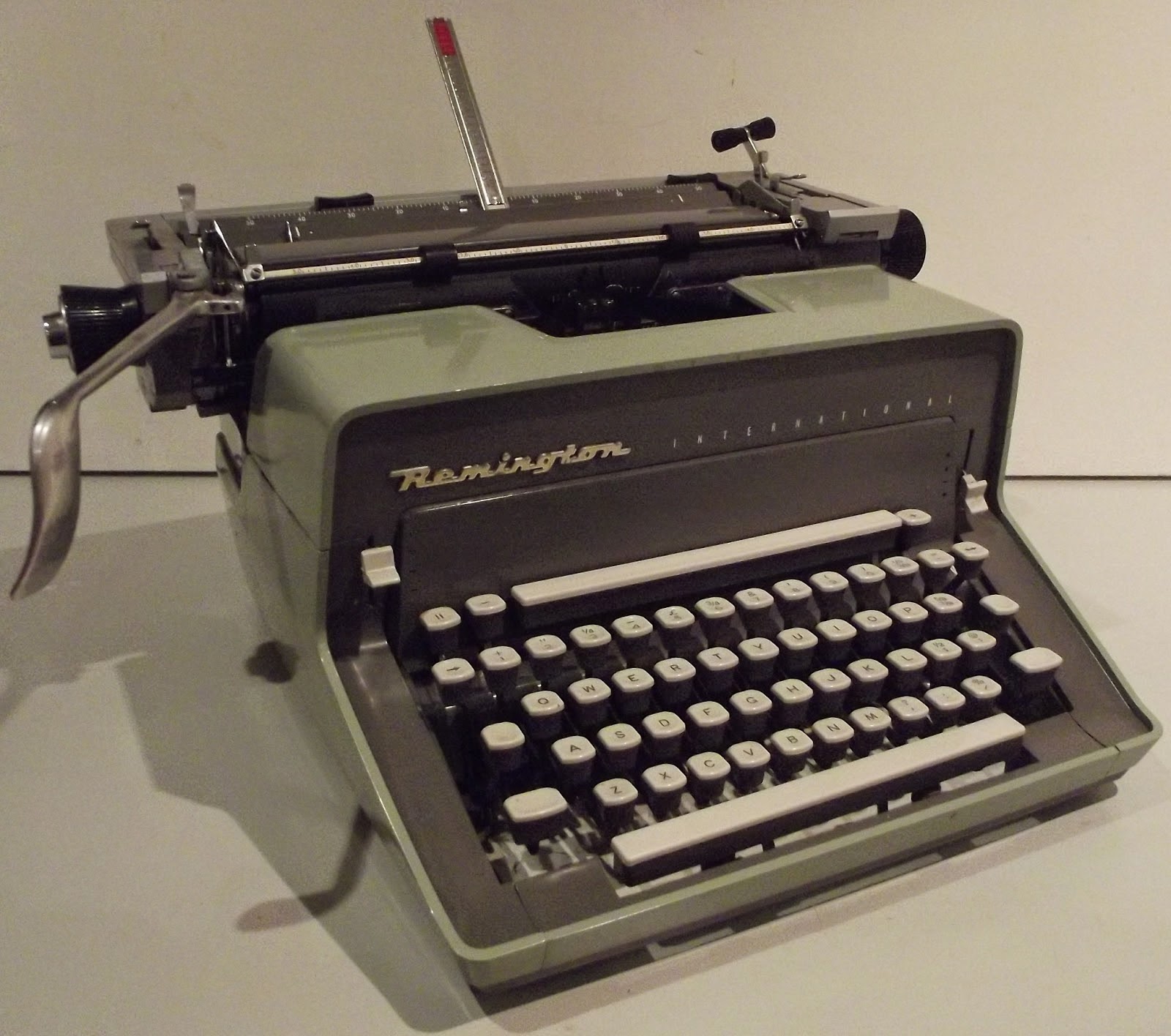 I became a sports columnist at The Australian and these were among the happiest, and most productive, days of my 47-year journalism career. When Murdoch wasn't running interference with what Deamer was doing, it was a damned good newspaper, too. I remember the time most fondly for my work on the anti-Apartheid demonstrations during the 1971 South African rugby union tour, getting to know such charming gentlemen as my golf heroes Arnold Palmer and Jack Nicklaus, working with tennis champion John Newcombe and watching the arrival of a very young Evonne Goolagong, and covering my first Grand Slam tennis and Ashes cricket series. 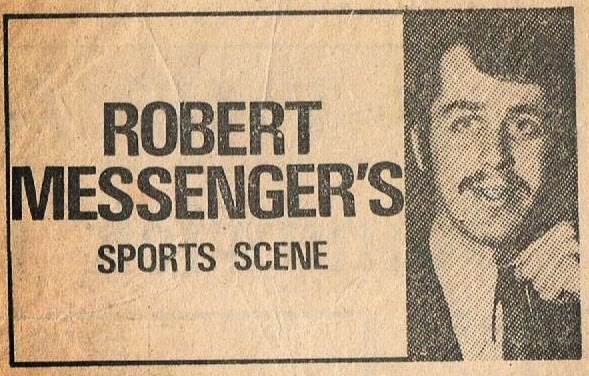 From Political Football, by the London Times correspondent in Australia, the late Stewart Harris. 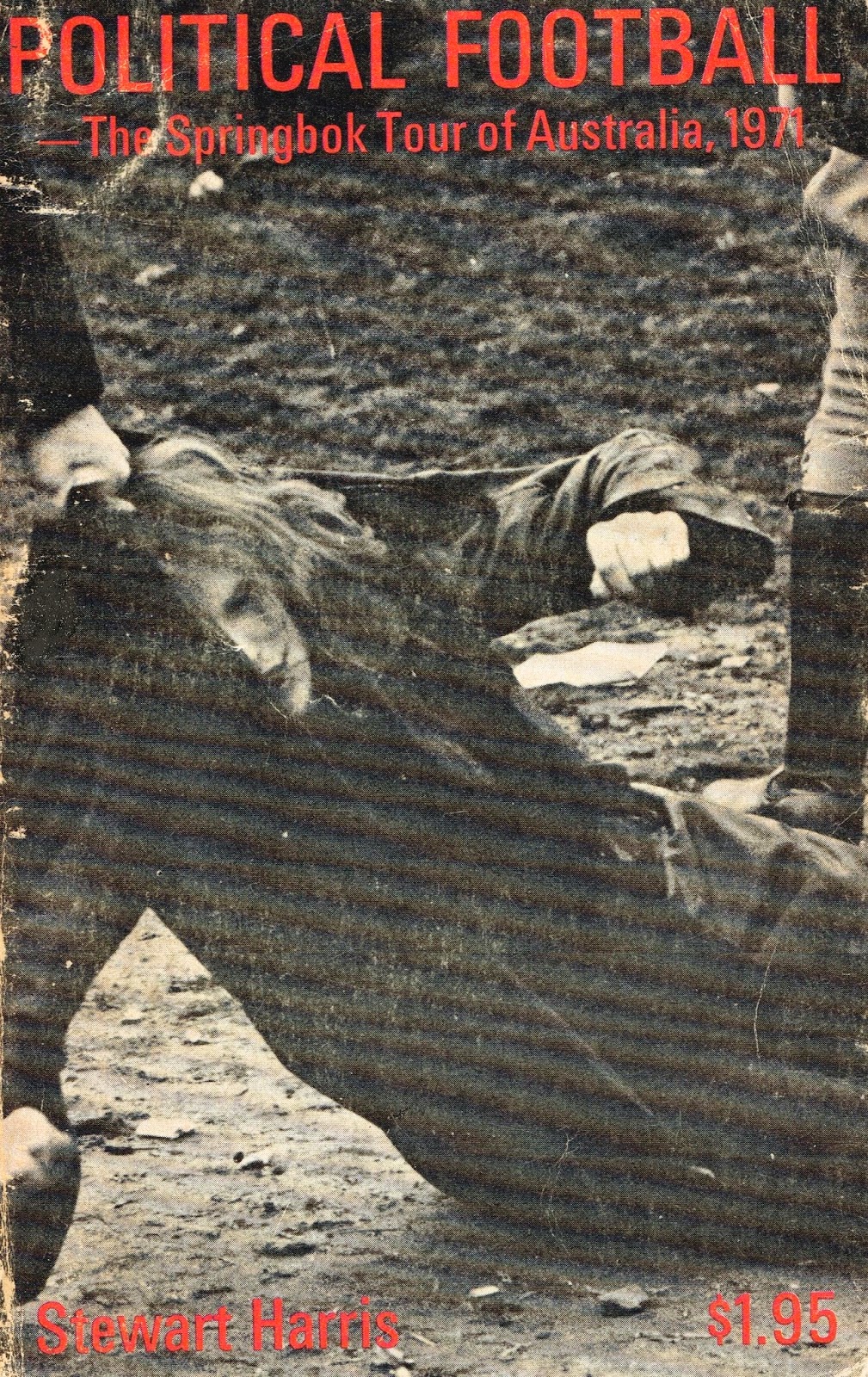 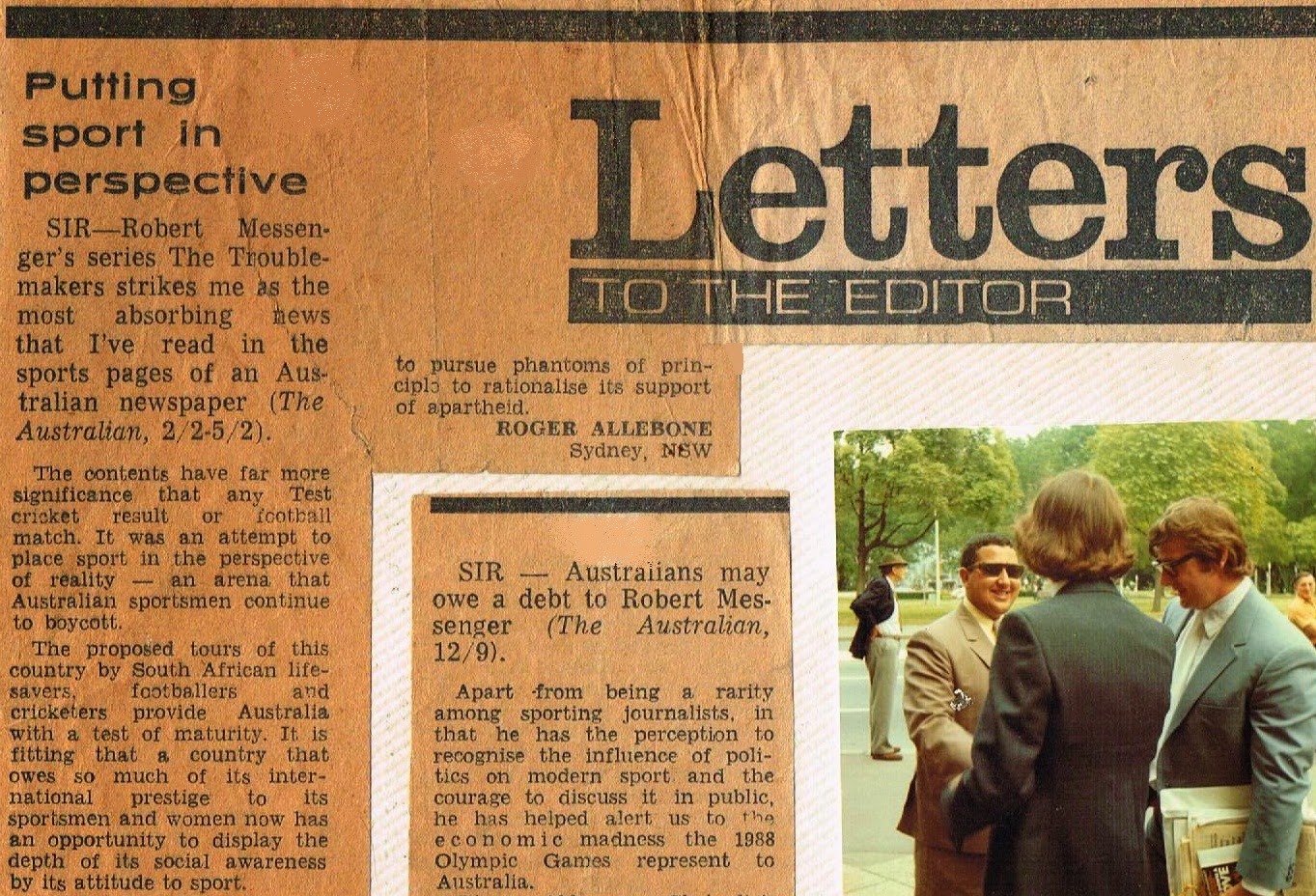 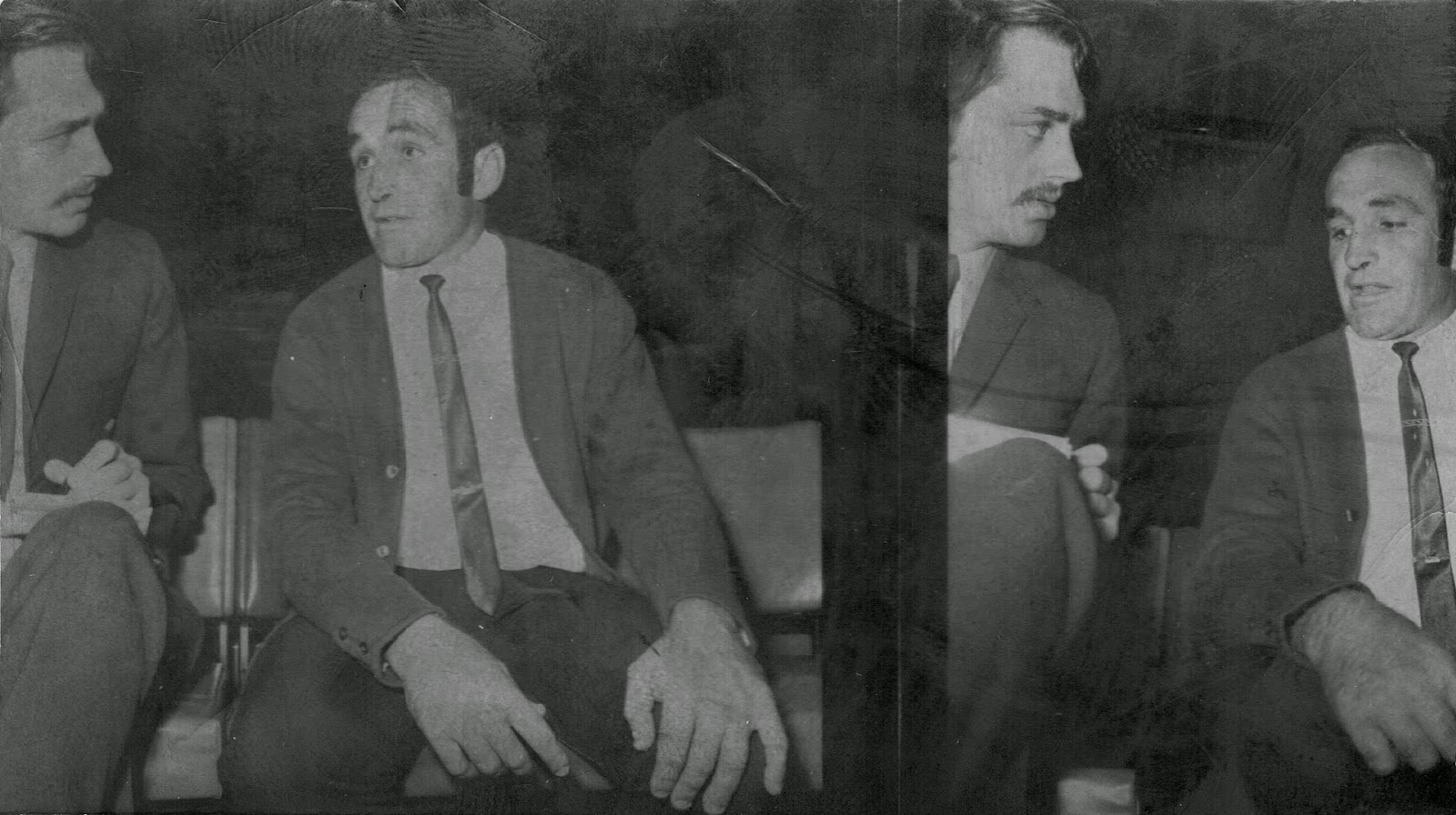 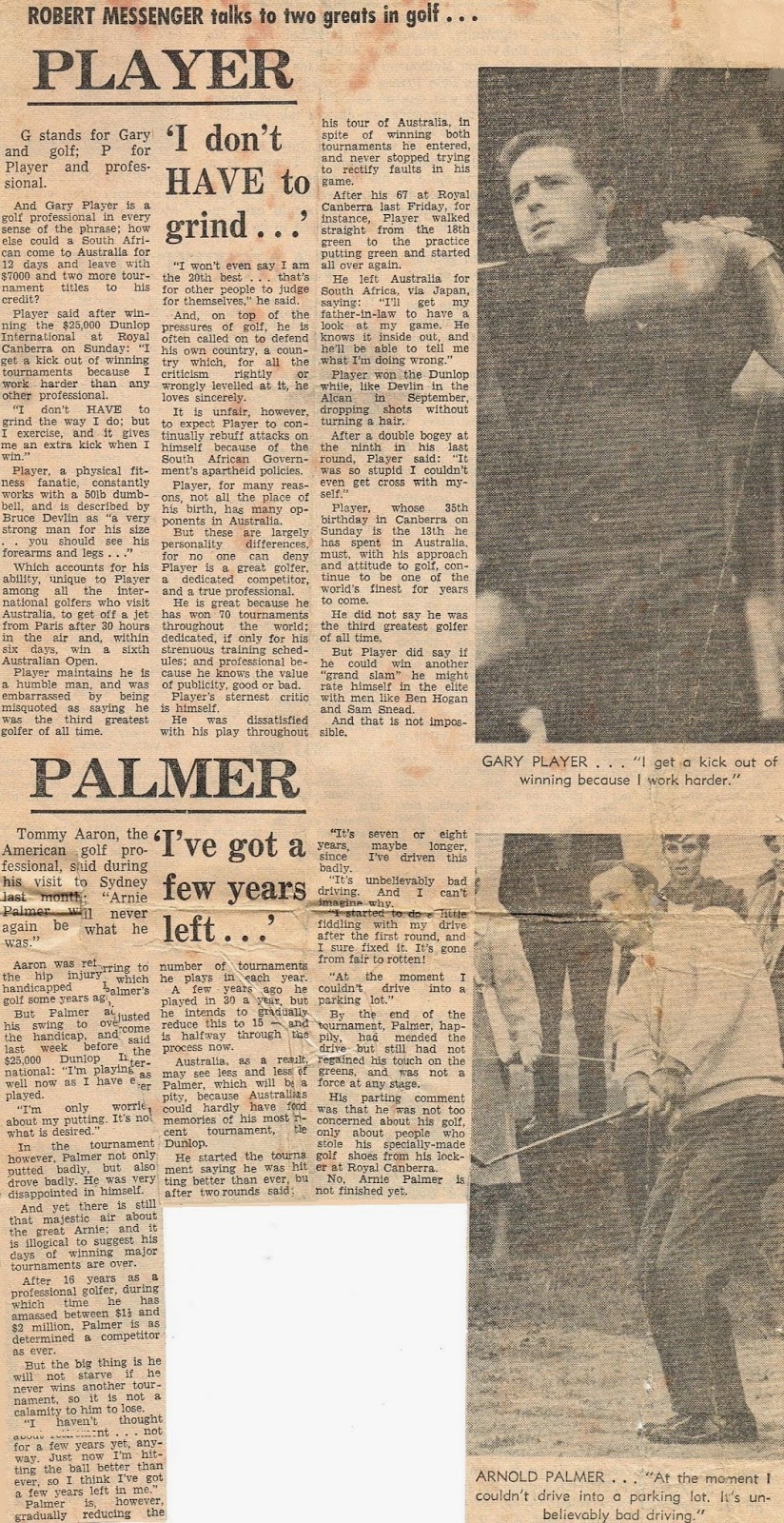 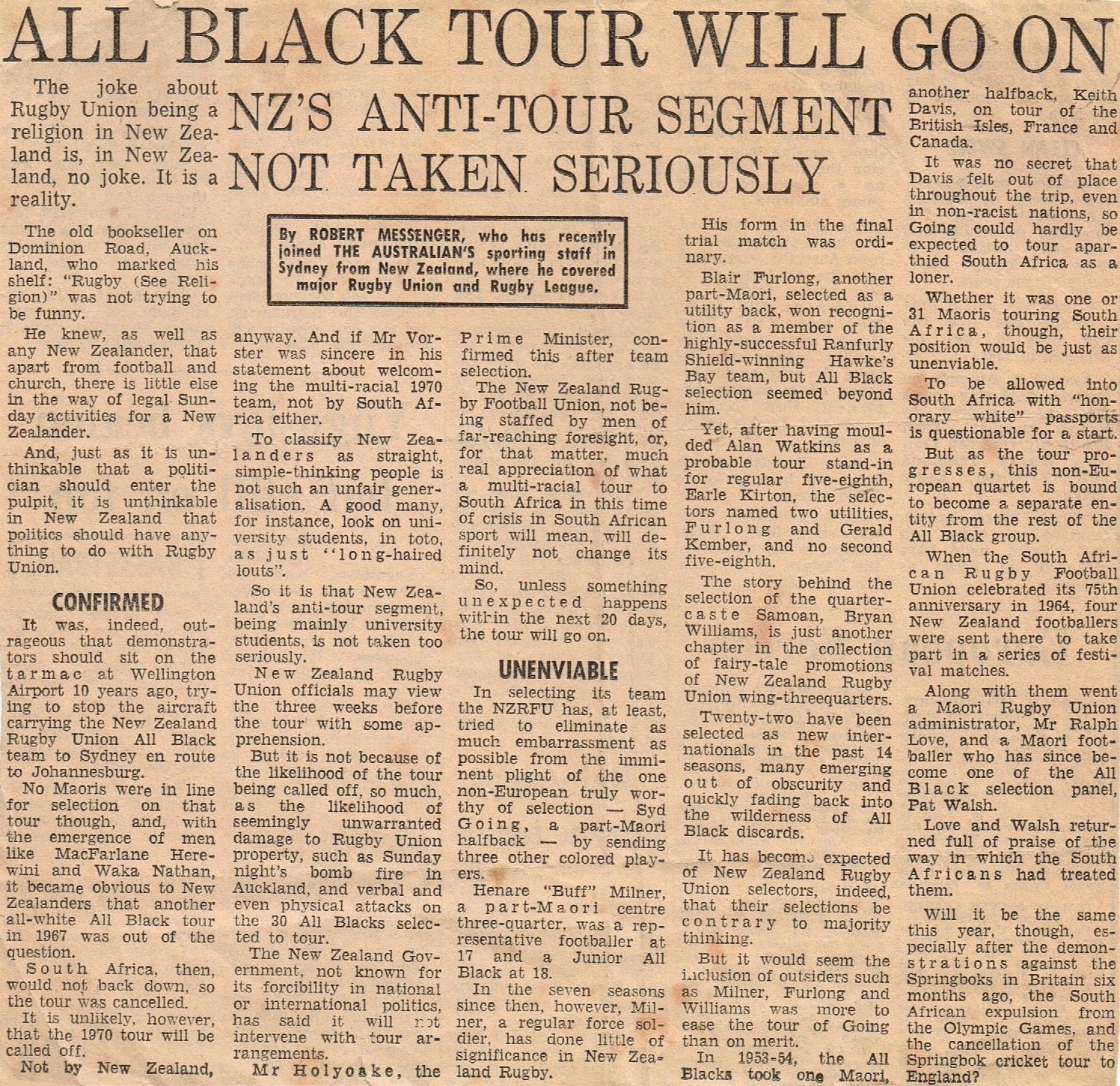 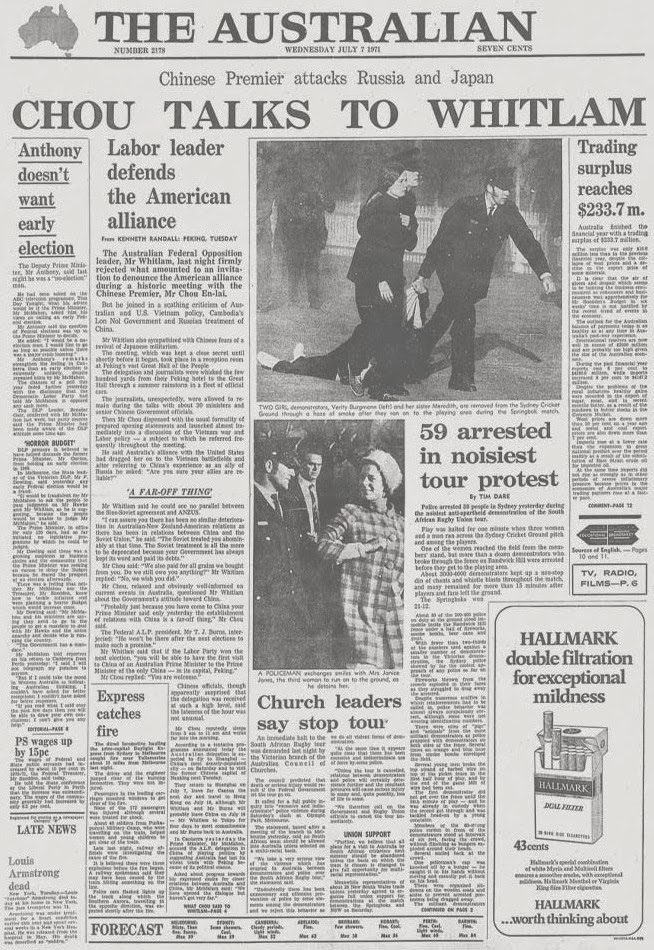 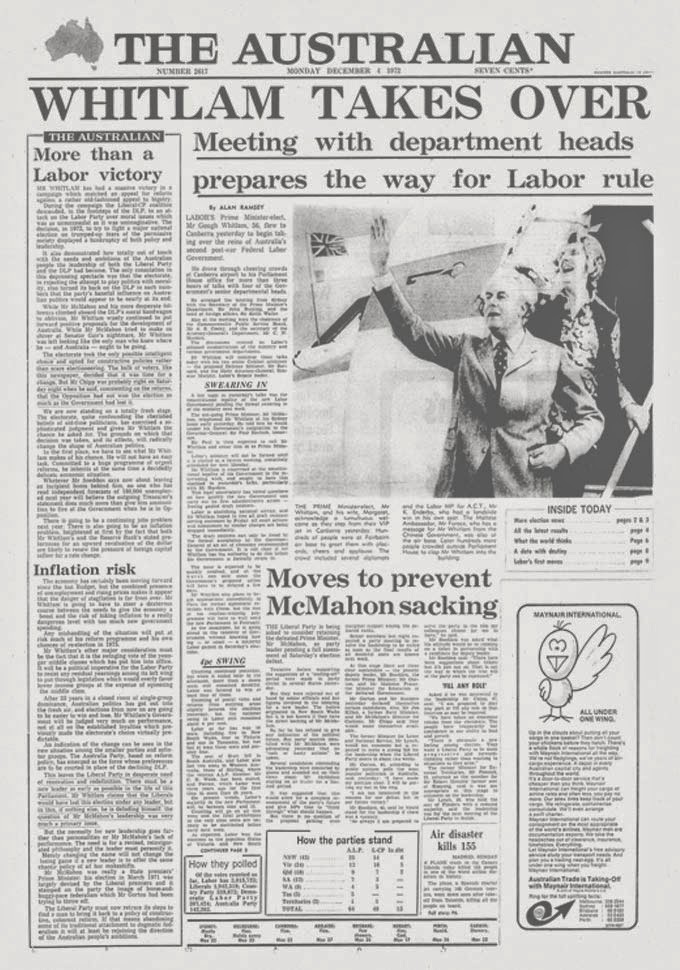 The far right-wing rag it is now: 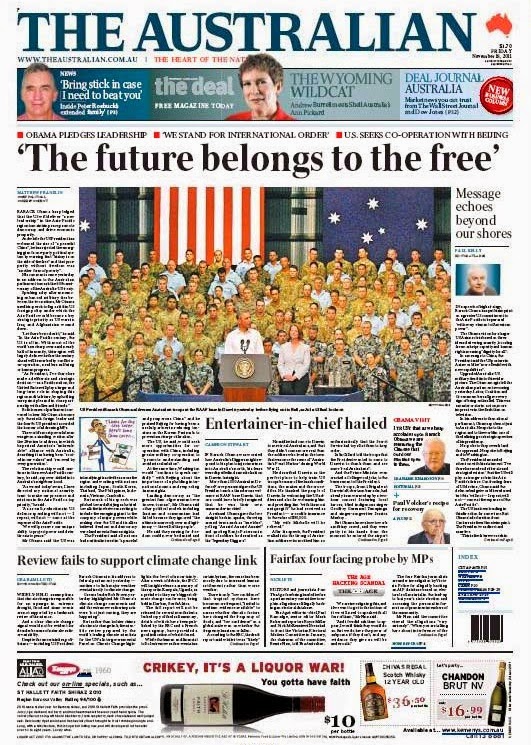 Thanks for the very enjoyable inside "scoop". You've also set us up, as usual, with a pile of primary source reading for afternoon coffee time.