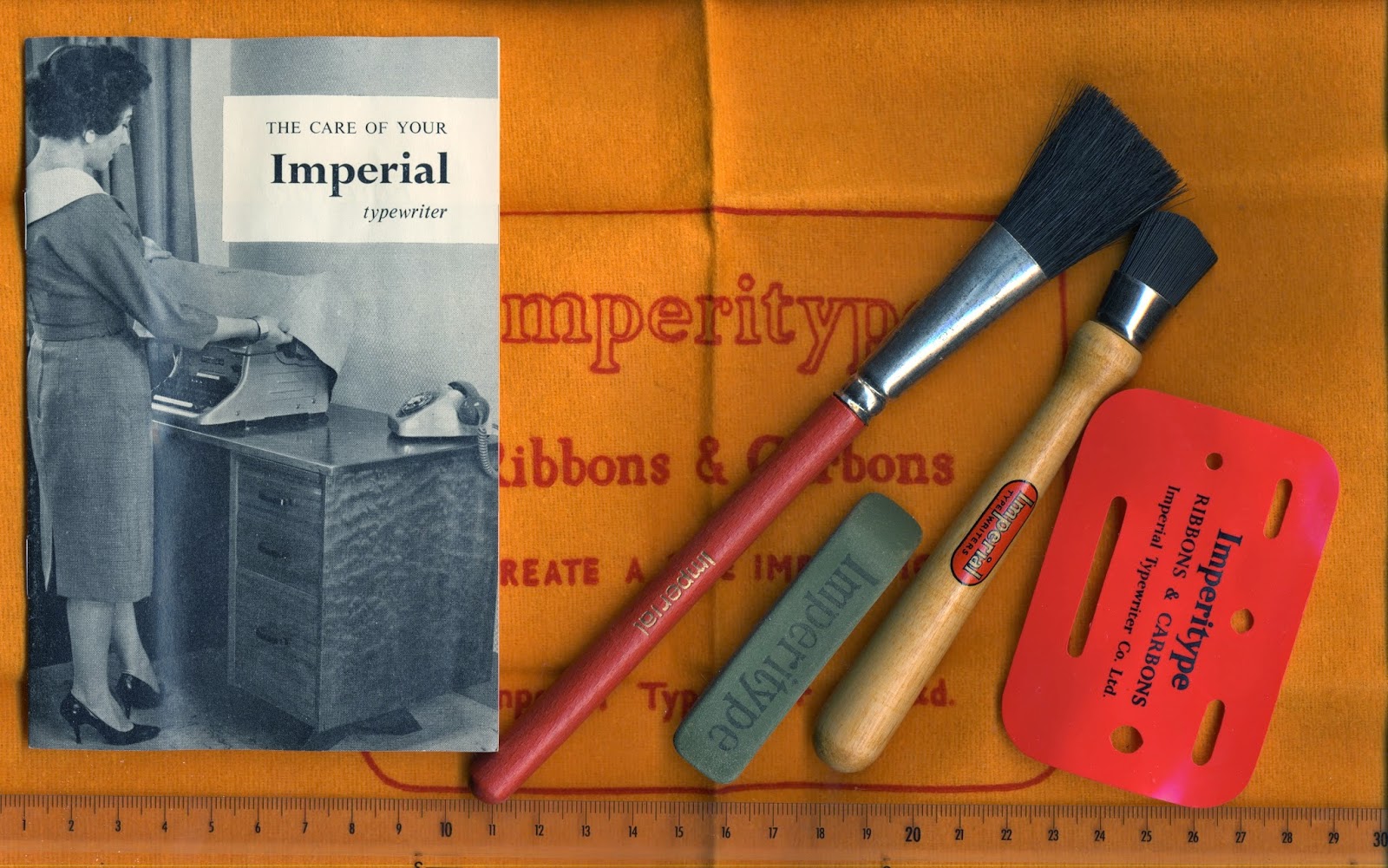 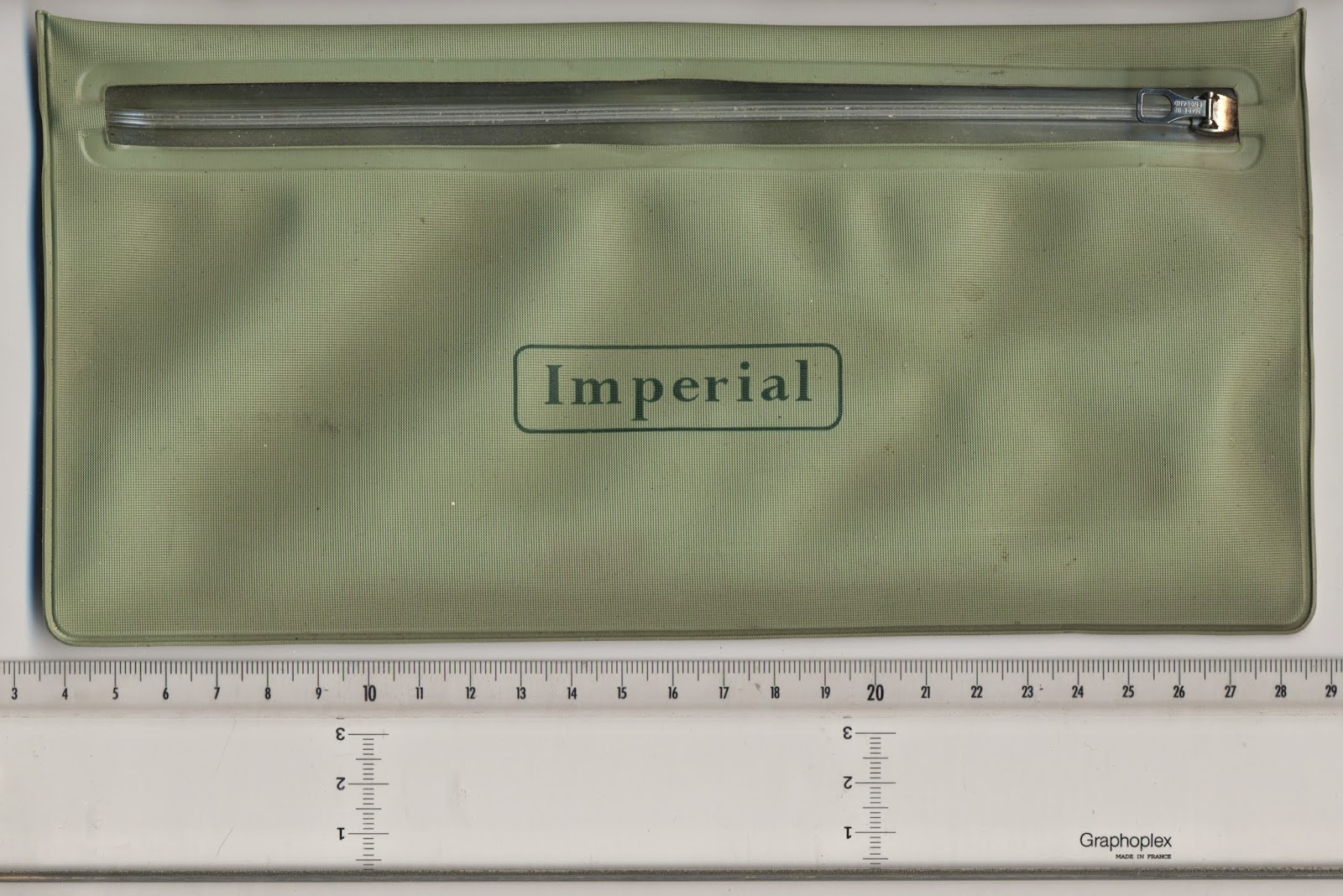 I posted last month on former Fleet Street journalist Christopher Long, now resident in Le Bosquet, Pont-Farcy, Normandy, France, who had got nostalgic about the "old days" of using standard typewriters in newsrooms in London. In particular, Christopher wanted to know about the model he was "most attached to", the one he had used most often.
I was able to identify the machine Christopher had used back then from images he sent of a newsroom. It was an Imperial 66. Christopher promptly decided he had to have one, and pretty soon he had acquired an Imperial 66 in almost immaculate condition. 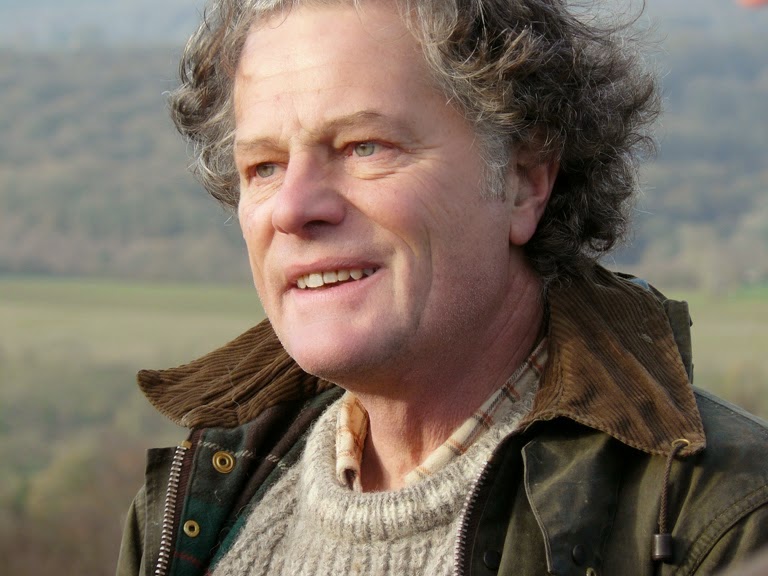 "I have now found the Imperial 66 I hoped for!" Christopher wrote. "It ... is in pristine, shiny, well-maintained condition, with the original instruction book and the little plastic bag containing the two original unused brushes, the yellow duster, the rubber eraser, etc. No rust and all the chrome work gleams! Extraordinary … Thank you for helping me 'live my dream' ... You’ve made an old hack happy!"
These days Christopher contributes to French newspapers and magazines and continues to edit web content. He is also an independent French-English interpreter for museums, associations, web sites, businesses and lawyers. In their spare time he and his wife Sarah breed pedigree Dorset Down sheep on five hectares of grassland in Normandy. 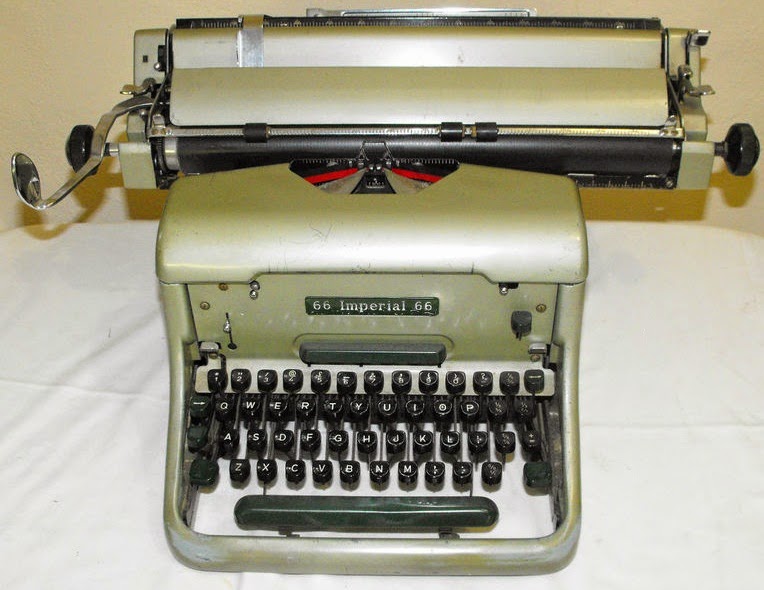 This is an Imperial 66, but not the one Christopher bought. 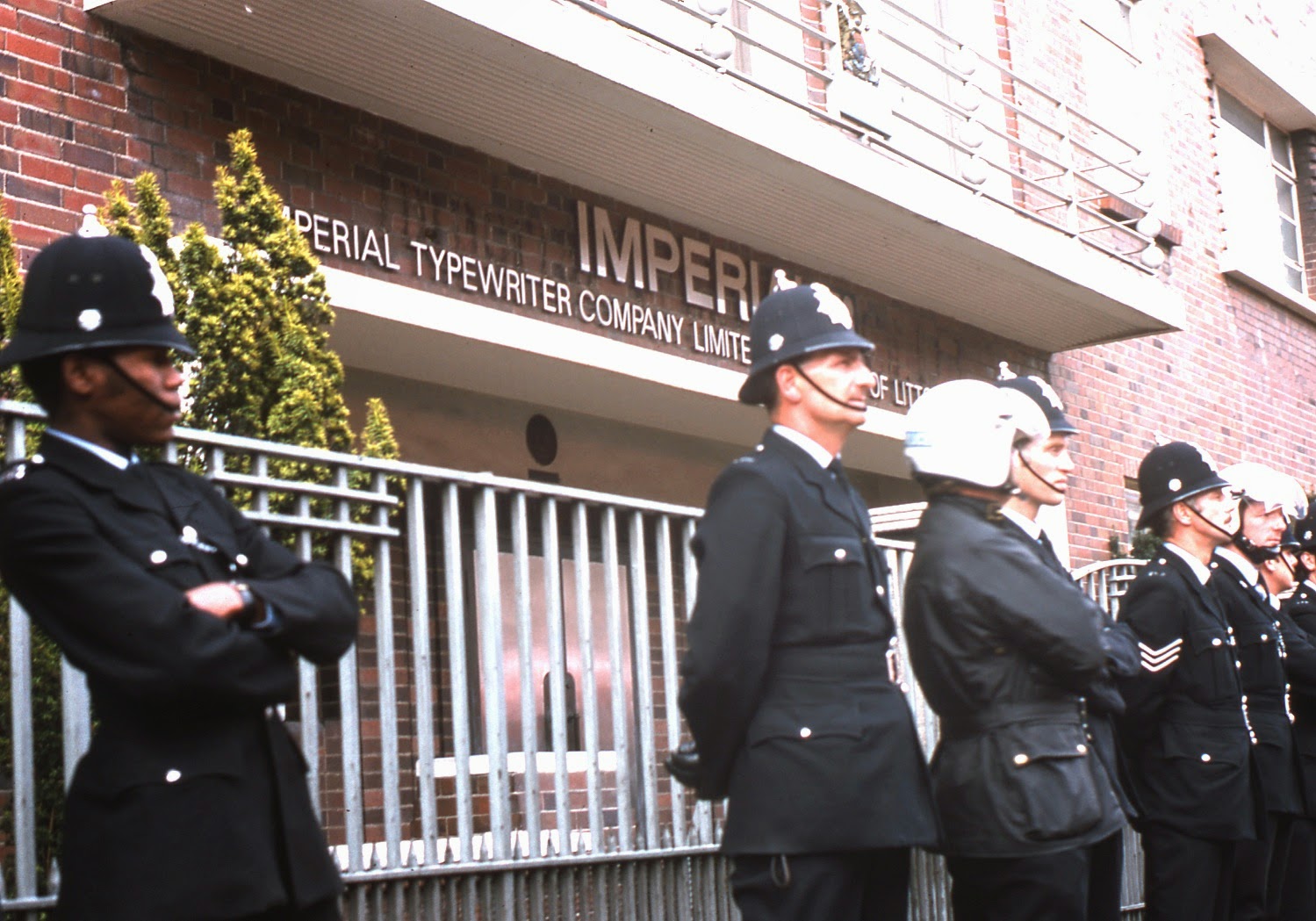 The rush is on. Old newspaper hacks storm the barricades of the Imperial Typewriter Company's headquarters in Leicester, looking to revive their happiest days, using Imperial 66 standard typewriters in noisy, smokey yet highly productive newsrooms across England. 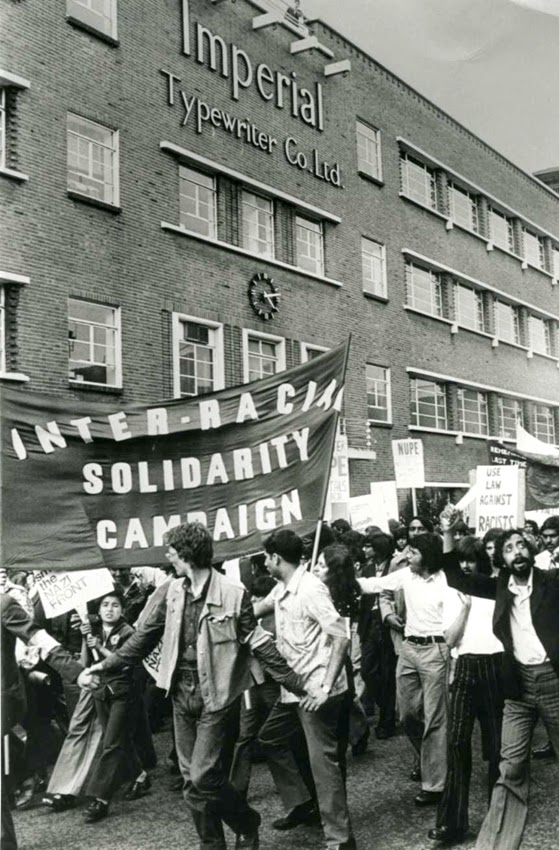 All jokes aside, these are the scenes when in 1974 angry Asian Imperial workers marched on Imperial's Leicester factory to protest Litton Industries' sacking of 40 Asian women without reason. All 1100 Asian workers at the company walked out on unofficial strike. The dispute was important in shifting the attitude of British trade unionists to immigrant workers. It also gave Asians in Leicester a new sense of identity, making them more self-reliant. Unfortunately, as was then common, the strike gave Litton an excuse to close both the Leicester and Hull plants in early 1975.
At the Imperial portable typewriter factory in Hull, workers staged an occupation a week after Litton announced, on February 21, 1975, that it would close the factories, saying they were “unprofitable”. On March 7, the Tribune magazine, Britain’s independent democratic socialist weekly, was scathing about Litton’s tactics. It was a nasty business, with the fascist National Front blaming the striking Asian workers for the Litton decision.

Sacked staff talked of forming a workers’ cooperative to continue typewriter production in Britain. Unions and former Imperial employees envisaged a “workers' self-management of the new enterprises which will replace the old Litton empire”. Litton “did everything possible to create pressures on the Hull workers to abandon their occupation of the plant. First, it threatened to withhold redundancy payments until it was given possession of the factory. Not unnaturally, this caused some distress, particularly among that section of the workers which had decided to accept dismissal. But then, to tighten the screw still further, the company announced that it would also withhold wages which were due, on the same basis.”
The employees agreed “not to fall into Litton’s trap”, and some workers who had initially opposed the sit-in decided to join it. The Transport and General Workers’ Union commissioned universities in the area to carry out research on Litton’s financial position and its claims about the Imperial factories being unviable. The workers said that “if the factories are to be viable, a distribution mechanism must be found which can market their product. At the moment, Litton thinks that it can pull out of producing machines in Britain, and yet retain the absolute right to market in the United Kingdom the typewriters which they manufacture abroad. Office and Electronic Machines (OEM), a British company, is presently expected to market Triumph-Adler machines, manufactured by Litton's German subsidiary." There were balance of payments implications of this assumption. One solution considered was to nationalise OEM. Short of that, the establishment of a government agency to compete in the office equipment business. "Public enterprise and government purchases alone could provide a very serious basic market." Alternatively, it was claimed OEM could be pressed, on balance of payments grounds, to agree to become the representatives of Hull-Leicester workers' enterprises. "It is clearly quite improper for a trans-national company to abandon its productive obligations to a country, and at the same time expect to exploit that country's markets unhampered in any way.” 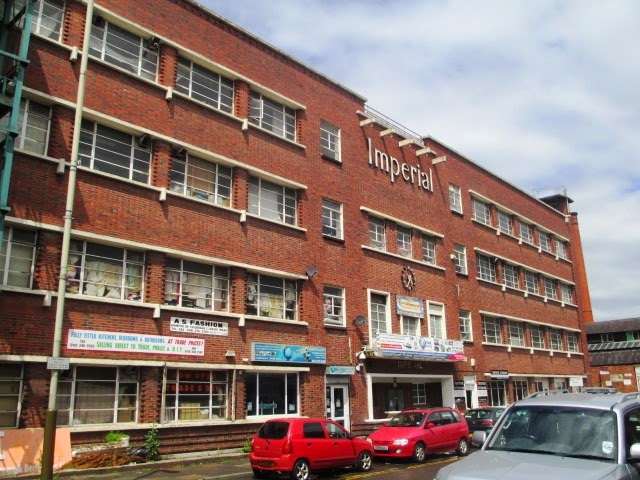 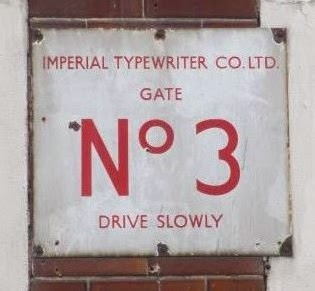 Posted by Robert Messenger at 10:32

It would have been really interesting to see if that type writer worker's collective could have made a go of it.Glad to see another newspaper man "re-converts" to type writers!