The 1926 Typewriter War of Dependence: A Battle Royal Between Britain, Australia and the United States 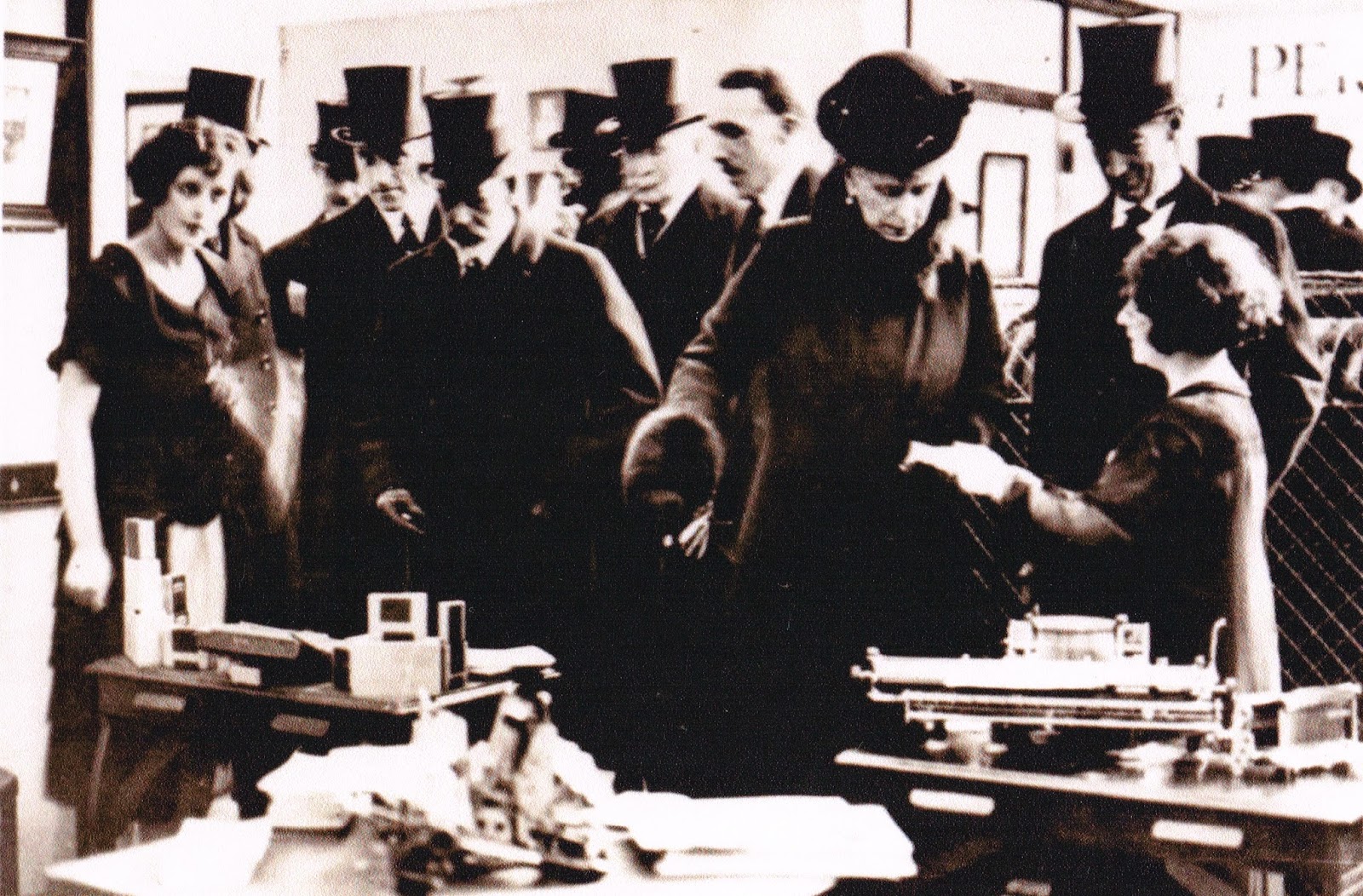 The King of England joins the fight: The battle reaches fever pitch at the British Industries Fair at White City, Shepherd's Bush, London, in mid February 1926, when Bill Mawle (with moustache, centre) moves in on King George V (third top hat from left) and Queen Mary (third from right) to complain about the British Government's Stationery Office buying American-made typewriters in preference to British machines. The king declares it a "scandal", and suddenly 2700 American-made typewriters disappear from British Government offices, to be replaced by British machines made in Leicester, West Bromwich and Nottingham. By the end of the month, Leicester and Nottingham were expanding sales staffs to meet the new demand. 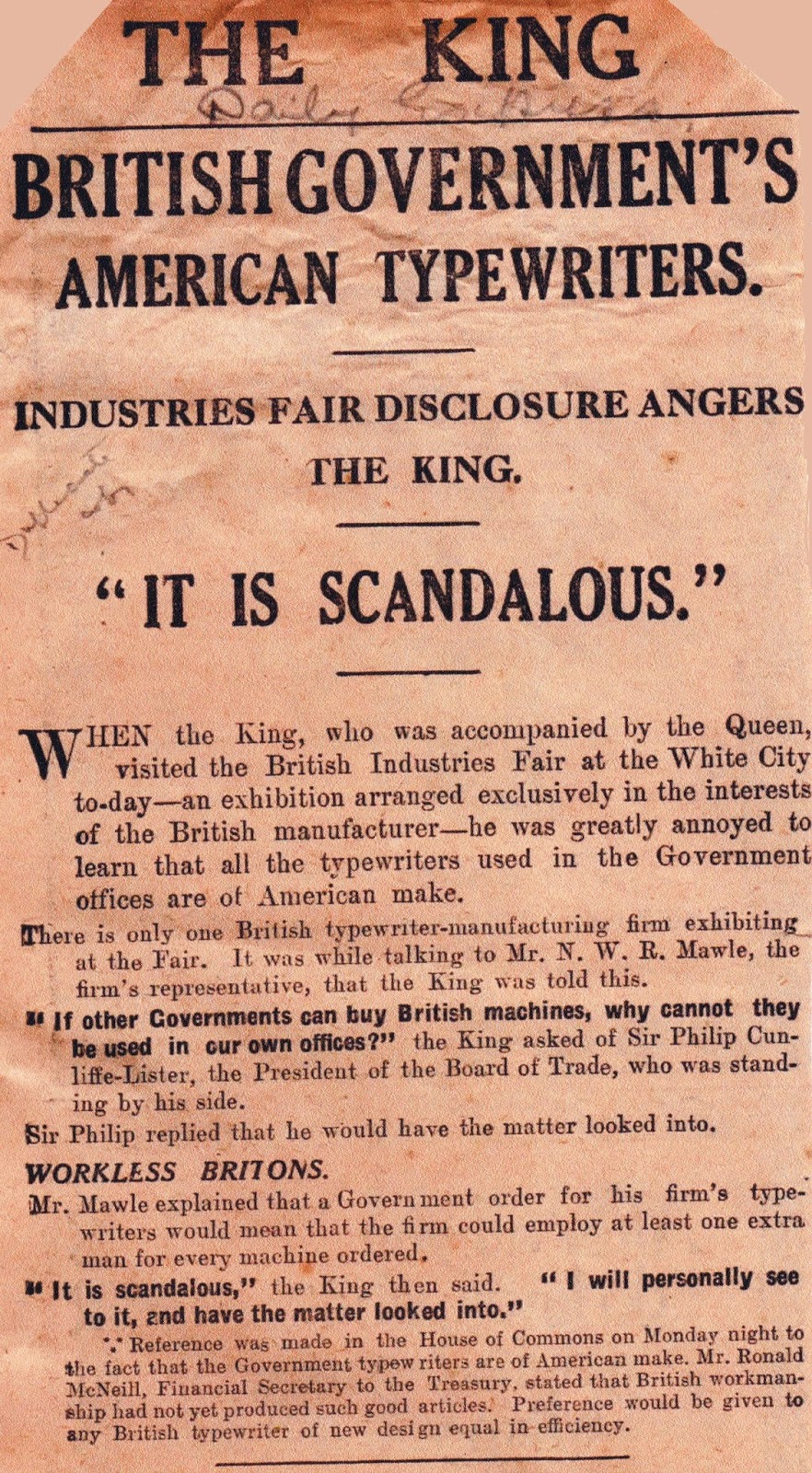 THE BACKGROUND TO WAR 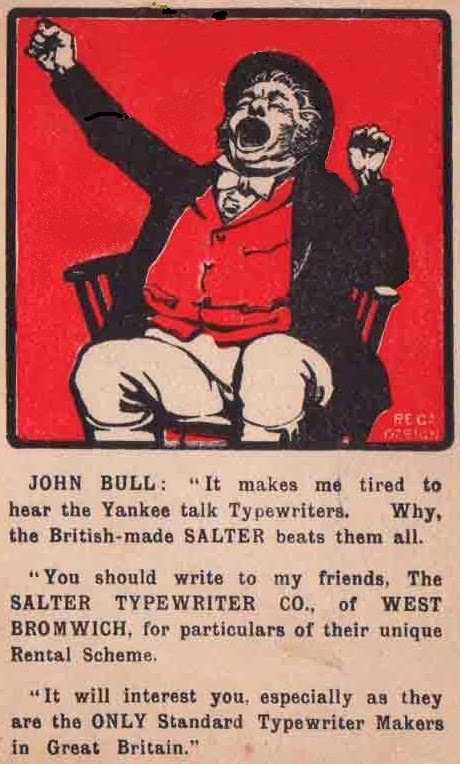 By the time the Typewriter War of Dependence broke out, in early February 1926, British typewriter manufacturers didn't like to admit it, but they had woken up to the fact that they were down on their knees. The World War I years had been devastating, and strenuous efforts in the immediate post-war era to revive the industry had fallen short of expectations. The tide in the international typewriter trade had decidedly shifted, with American manufacturers setting standards the British could not match. Indeed, British typewriters, faced with such intense competition, had disappeared from the public consciousness in their own country. 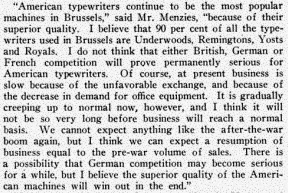 1922
The export value of American typewriters rose from $11 million in 1913 to $36 million in 1920 - of which Britain in the immediate post-war period took almost two-thirds.
Britain had never really been in the same league as the US in the production and exportation of typewriters. But the war seriously exacerbated the situation. In the three years between 1917-1919, Britain had had to import 93,093 typewriters (as Britain was at war with what had previously been one of its major trading partners, Germany, almost all of these came from the US) while it exported a mere 7411. 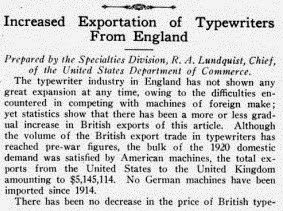 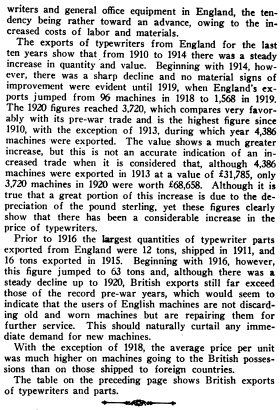 1922
This crisis for the British typewriter industry deepened in the economic aftermath of the war. The degree to which Britain felt beholden to the US for decisively intervening in the war remains debatable. What is certain is that by 1921 a cardinal principle of British foreign policy was to “cultivate the closest relations with the United States”. This was in the face of growing public ill-feeling on both sides of the Atlantic, caused in large part, at least in the US, by Britain's massive war debt to America.
In 1923 Britain renegotiated its ₤978 million war debt to the US Treasury by promising regular payments of ₤34 million for 10 years then ₤40 million for 52 years. The idea was for the US to loan money to Germany, which in turn paid reparations to Britain, which in turn paid off its loans from the US.
Britain abandoned free trade for duties (as high as 15 per cent on typewriters*) and a policy of "imperial preferences". (*In Australia, the rate remained at 10 per cent, but was free for "preferentials" - that is, other countries in the "British Empire", such as Britain and Canada. Not surprisingly, there were no duties on imported typewriters in the US.) 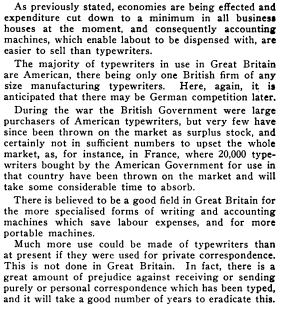 1922
While the British economy and the pound sterling were seriously on the slide, the US economy was booming on the back of mass production techniques and growing efficiency, and the dollar had become increasingly attractive. Britain was tied to the gold standard and its economy experienced deflation and stagnant growth. In 1925, British Chancellor the Exchequer Winston Churchill returned the British pound to its pre-war level of $US4.85. This meant British exports were overvalued,  and monetary policy had to be kept tighter than necessary. British industries struggled to make the same productivity gains as the US. Traditional British industries faced global oversupply. Wholesale prices fell by 25 per cent between 1921 and 1929, but were not matched by falling wages. Deflation discouraged consumer spending and increased the burden of debt.
Despite the weakness of the pound, it was necessary to pursue deflationary fiscal and monetary policy. Because US inflation was low, this meant Britain was effectively aiming for deflation. The attempt to keep the pound in an overvalued fixed exchange rate was a key factor in contributing to deflation and lower economic growth.
The upshot of all this was that in spite of the importation costs and 15 per cent tariffs, US-made typewriters were far better value - they were still competitively priced and were markedly higher quality machines.

BRITISH TYPEWRITERS IN THE 1920s 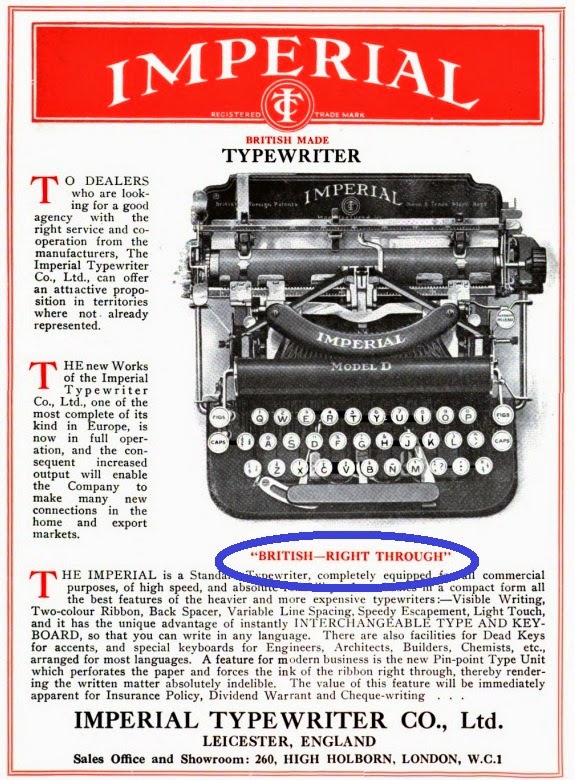 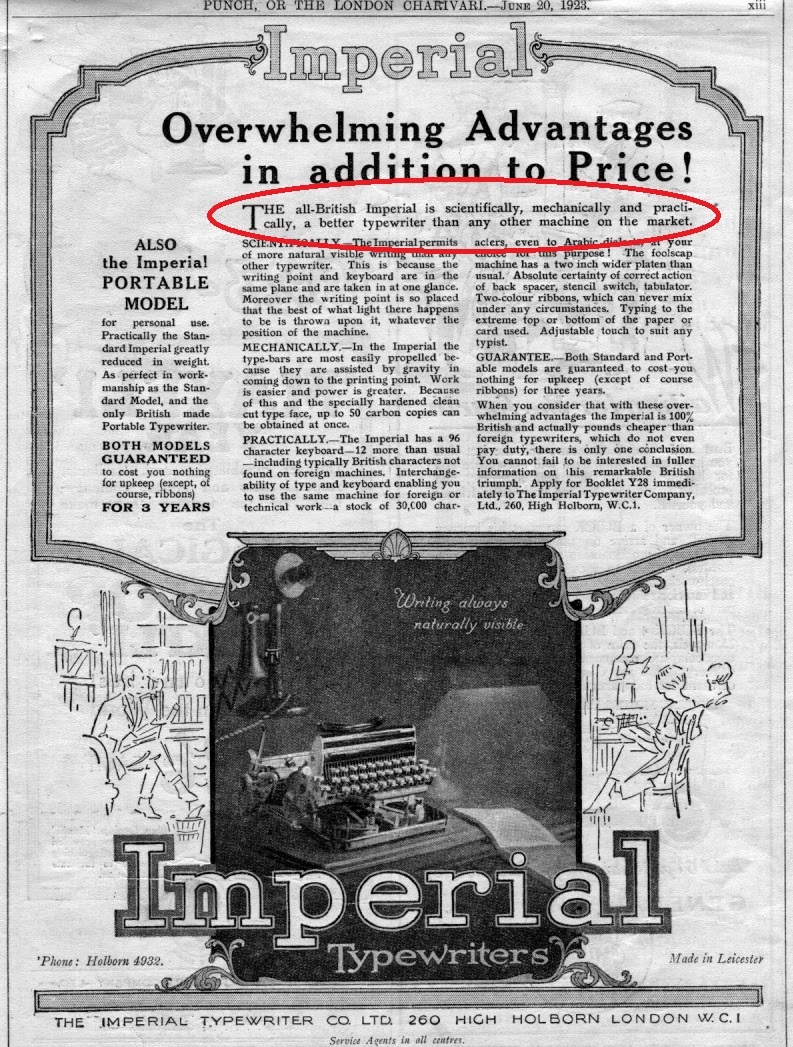 The ad above comes courtesy of Peter Weil.
In April 1926, two months after war began, a British newspaper reported that "It is common knowledge that British-made typewriters are in very few commercial offices in this country". "It is, in truth, little wonder that English business houses did not install British typewriters, for hardly anyone has ever heard of their existence ... one could have asked almost any businessman or his typists what the names of the British makes of typewriters were, and he would not have been able to give the information. If the firms find that they have no home market for their machines, they have only themselves to blame." 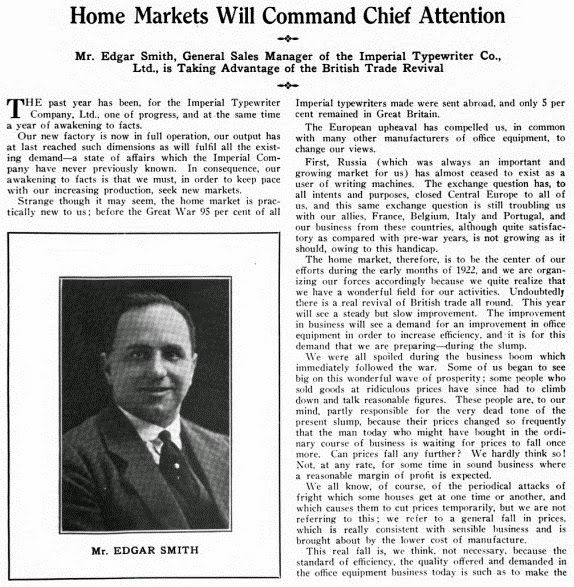 1922
Imperial was still making what was fundamentally the Hidalgo Moya-designed downstroke "portable" which had first appeared in 1908 (as the Model A). Upon resuming typewriter-making at the end of the war, Imperial introduced a straight keyboard Model D, yet this didn't go into full production until 1921. A smaller, lighter version appeared in 1923, by which time downstroke typewriters were very much outmoded (the Oliver remaining an exception which didn't prove any rule). In 1926, the year the "typewriter war of dependence" broke out, Imperial decided head design engineer Arthur Bott Pateman should begin work on a conventional standard (the Model 50). This emerged in 1927, and was Britain's first (and only) real competitor for the US-made Remingtons, Underwoods and Royals. It had, however, an awful lot of ground to make up, even in Britain. 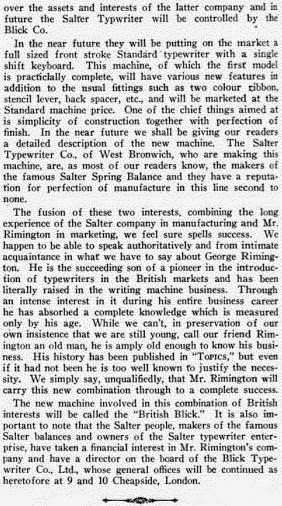 1922
Between 1923-29 the Rimingtons' Blick Typewriter, British Typewriters and Empire Typewriter companies (the last a separate trade mark taken out in 1920) were having British Blicks (Blick-Bars), British and British Empire typewriters made by George Salter & Co in West Bromwich, and the Empire and Blick Universal by Adler in Germany.

1922: Made by Adler in Germany for the Rimingtons and sold to the British Government!
The Salter-made machines were structurally weak, possibly from the use of inferior material to lower prices, a problem which prevented them from being competitive. Until 1923, the Salters themselves had continued to make a "Salter Visible" standard with an inclined typebasket. It wasn't a success, either. 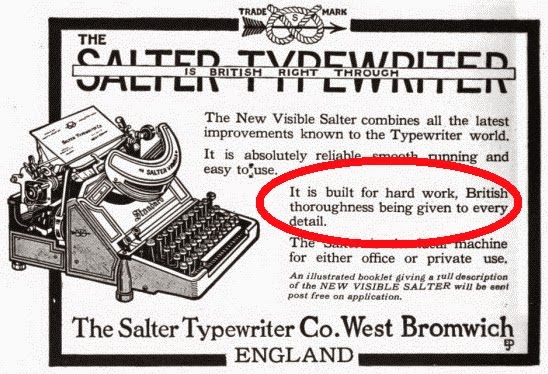 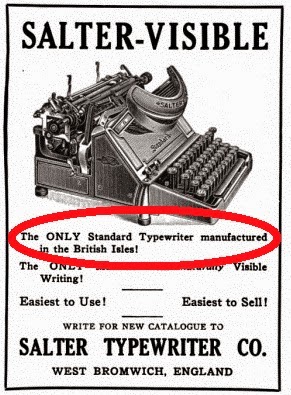 1922
After building a typewriter-specific factory in Nottingham in 1919 to make Herbert Etheridge-designed "all-British" frontstroke Bar-Locks, the Richardsons saw the writing on the wall in 1925 and sold the plant to the Jardines, who continued bringing out Bar-Locks.  These, like the Rimington and Salter typewriters, were simply not good enough to compete with the American machines. The Richardsons, meanwhile, took over the American Oliver brand. 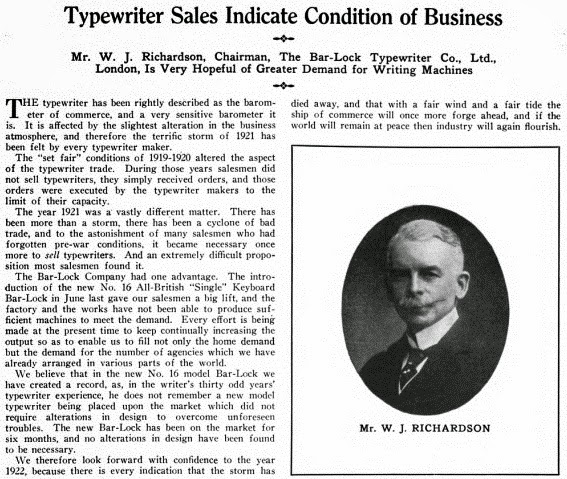 1922
Viscount Henry Lascelles, son-in-law of King George V, failed miserably to get his ₤500,000 "all-British" Conqueror project off the ground in Leeds, and the factory was sold in August 1922. 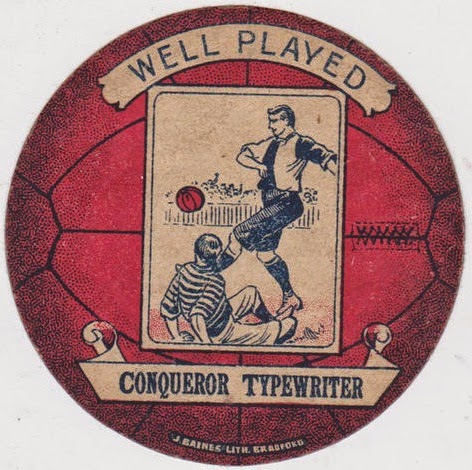 Britain had no fully home-ground portable typewriter until 1932, when Imperial produced the Good Companion. In 1930 the Jardines bought the British rights to make the German Tell as the Bar-Let. Later in the 30s the Jardines also produced a poor copycat version of the Hermes Baby, the Bar-Lock portable. In the mid-30s the Rimingtons and Salters sold their typewriter plant and brand names to Norman William Reginald Mawle to make Hermes Babys as Baby Empires.
THE WAR 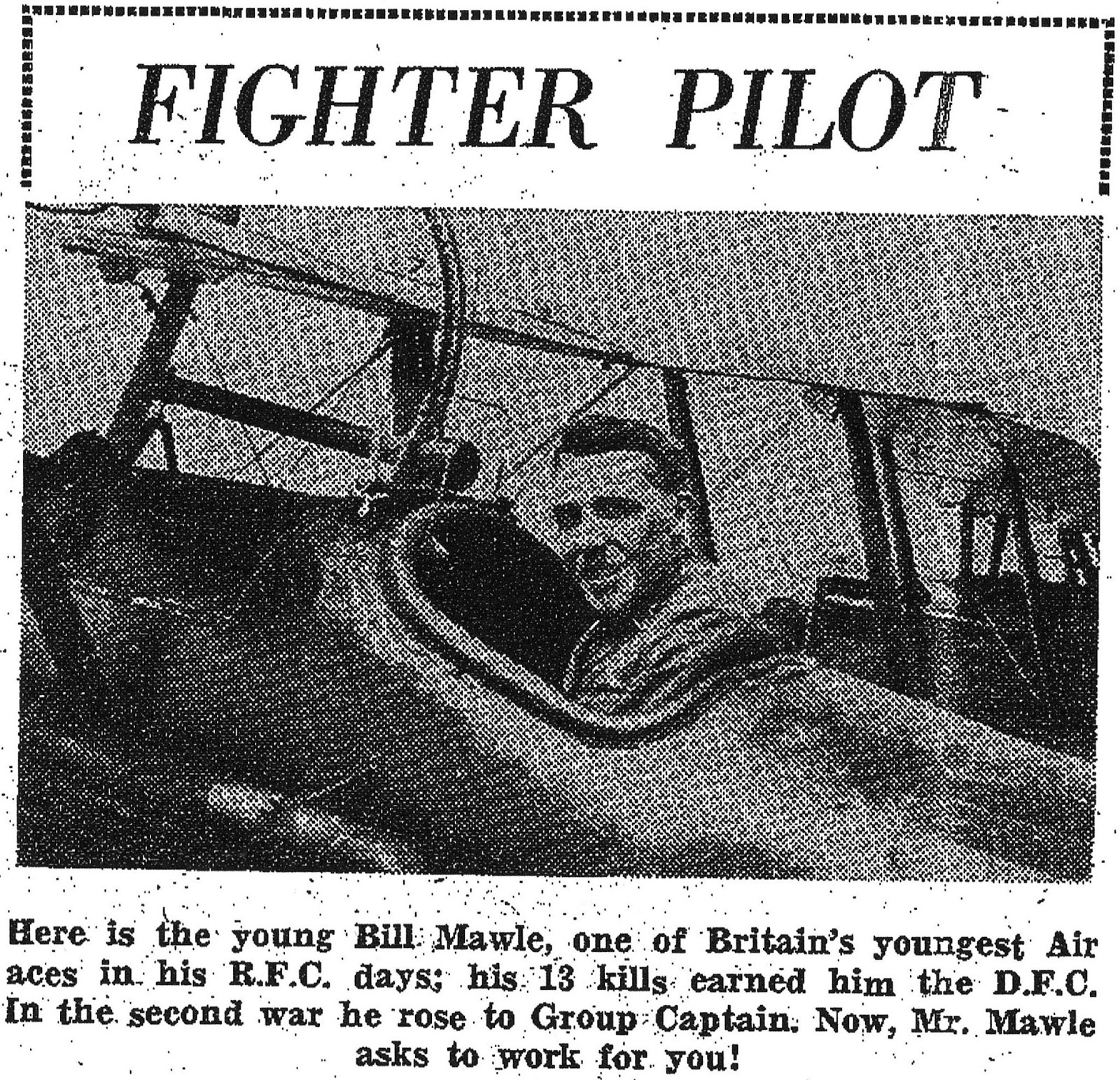 The war broke out in early February 1926 and Norman William Reginald "Bill" Mawle, a World War I flying ace, was front and centre of it throughout. It started with Britain's Financial Secretary to the Treasury, MP Ronald McNeill, answering a question in the House of Commons on behalf of Stanley Baldwin's Conservative Government. McNeill said "British workmanship had not yet produced such good value in typewriters and labour saving machines as America. The typewriting machines used are still of American make, but whenever they could use a British machine which was at all equal in efficiency to the foreign one the Stationery Office would give preference to the British article."
At the time McNeill's comments were published in the British Press, Mawle, who succeeded Edgar Smith, had been general sales manager of Imperial almost two years. Mawle and Imperial took great umbrage and rallied the Salter company to the cause. A letter was written to McNeill, Salter stating that "we are manufacturing typewriters at these works which are equal to any American machine made". An unsatisfactory reply came from the Treasury Chambers in Whitehall, saying McNeill understood 23 British Empire typewriters bought by the Stationery Office in the preceding year were made by Salter. Which was only half right, as they were made by Salter for the Rimingtons.
Mawle was determined not to let the matter rest, and again took up the cudgels. He wrote to Salter director Charles Sidney Bache on an Imperial letterhead. Mawle said American typewriter makers had been advertising machines as either "Built in Britain" or "Assembled by British Labour". This Remington ruse was a few years later used in Australia as well. 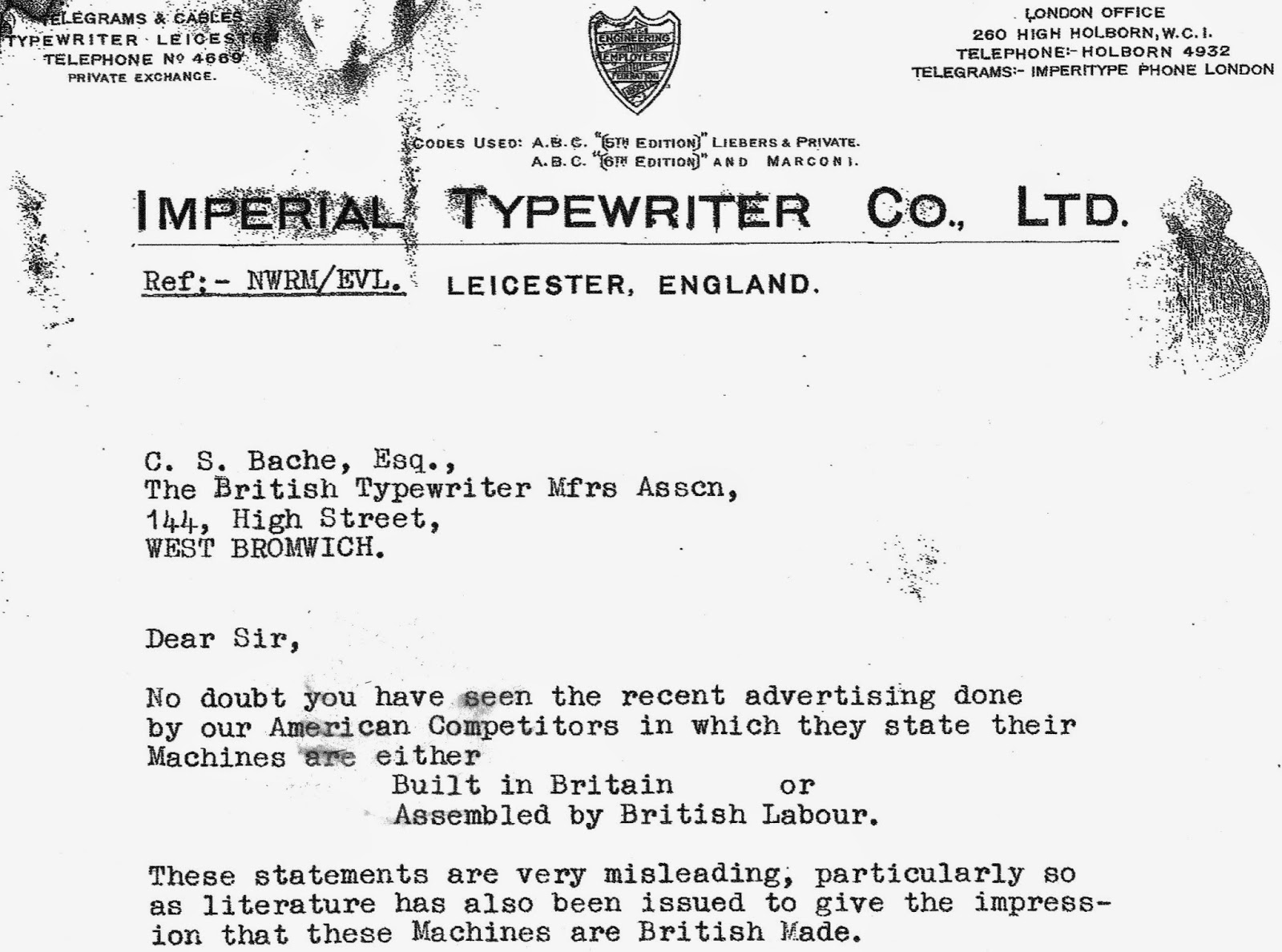 Calling the claims misleading, Mawle said British typewriter makers employed hundreds of workers in 11 different trades, working in more than 120,000 square feet of factory floor space, whereas "assembling" took only "a few dozen mechanics and boys" and "of course the profits pass out of the country". Mawle offered the use of an Imperial poster to Bache and the Rimingtons, as well as the Jardines. The poster read, "See that yours is made of British material by British labour and backed by British capital". Bache, as its secretary, accepted the offer on behalf of the British Typewriter Manufacturers' Association.
These posters were used at the British Industries Fair at the White City in Shepherd's Bush, London (where, ironically, American typewriters were in official use). This is where Mawle made his decisive move on King George V:

AUSTRALIA JOINS IN
Between 1930-34, Australians, such unthinking loyalists, were told to join the fight. The full text of this item, written by Mawle and which appeared in the Adelaide Advertiser on May 24, 1930, reads:

TYPEWRITER PREFERENCE!
BRITISH OR FOREIGN MACHINES?
In view of the protest lodged by our competitors against acceptance of the "Imperial" British Typewriter tender, we set out the following facts which will help you to appreciate the difficulties which distributors of British machines have to overcome. The following extracts are taken from a publication of the Imperial Typewriter Company Limited, Leicester, England. 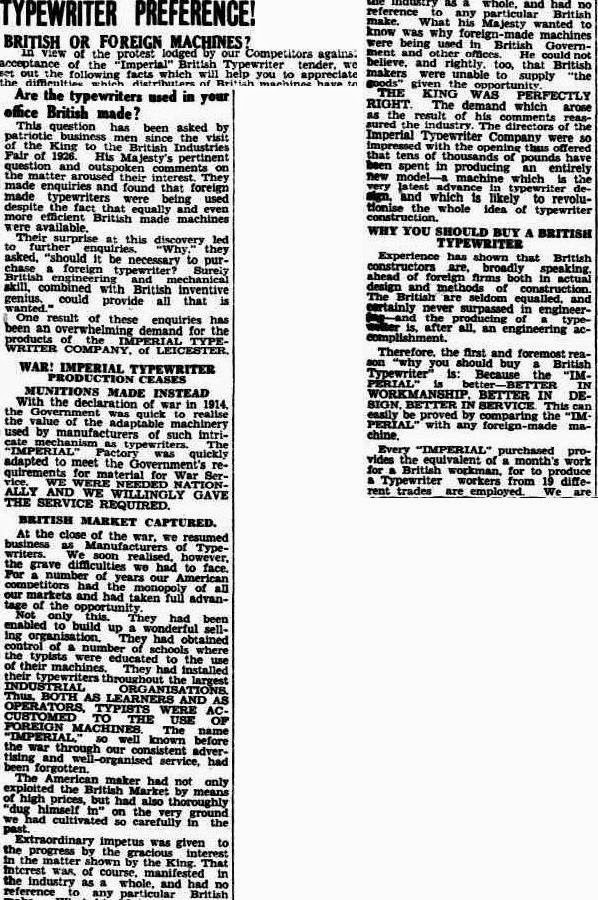 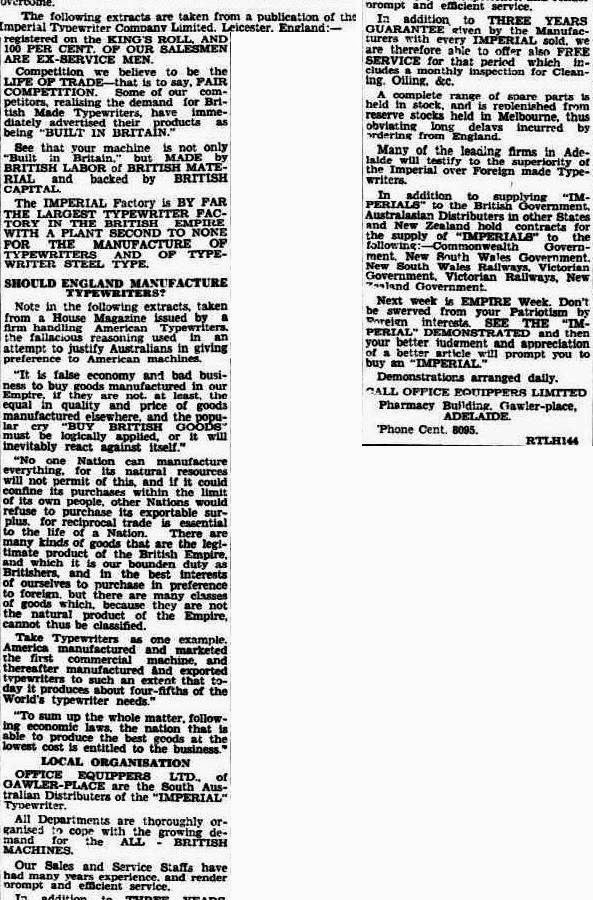 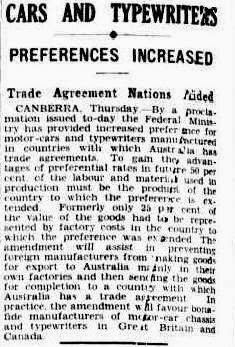 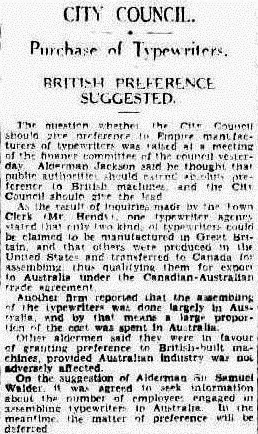 Posted by Robert Messenger at 01:13

This is an amazing story! How do you find these little gems? Buried in an archive somewhere?

Thank you Disciple, you are very kind. This information (along with the original documents) was fleshed out by the grandchildren of Bill Mawle, Guy in Wales and Vanessa in Sydney, who have been kind enough to scan in and furnish me with PDFs of material which Mawle himself collected. I was able to make contact with Guy and then Vanessa saw the posts and offered even more material. I feel very fortunate to be able to make these contacts through the internet.

That explains the "wings" (ribbon covers) on the Empire Aristocrats!

Very interesting! Always good to see perspectives from across the pond.

In a 1939 journal, an Australian entering England makes this note: "The day was sunny and the sea calm and in an incredibly short time we were at Dover with our bags lined up for the pleasant young customs officer, which questioned me about my typewriter and seem to much relieved what I said I was a journalist and he could push it through."

Your story explains why she purchased the typewriter in Italy instead of bringing one from Aus. and why customs would question it. It is supposed that a journalist was excused from a duty on typewriters?