The Story of a Typewriter Company, Typewritten by its Founder

- Norman William Reginald 'Bill' Mawle, founder of British Typewriters Ltd,
at the launch of the Empire Aristocrat in 1948 Above, Bill Mawle as general sales manager of the Imperial Typewriter Company in Leicester in 1931. Mawle had joined Imperial as a Leicester-based salesman in 1919, following his extraordinary flying exploits in World War I, and became general sales manager in 1924. He remained with the company until 1936, when he established the British Typewriters Co Ltd in West Bromwich. He was still with Imperial when he attended a trade fair in Switzerland in 1935 and secured the rights to manufacture the Hermes Featherweight in Britain. British Typewriters produced the Baby Empire and the Empire Aristocrat.
Below is Mawle's own typewritten story of his company, provided, with these images, by his grandson, Guy Mawle. The story, perhaps written to mark the launch of the Empire Aristocrat in 1948, offers evidence of why Georg Sommeregger's 1939 Baby Empire was assembled in West Bromwich from parts made by Paillard in Switzerland - the British company did not resume full manufacture of its typewriters until 1946. 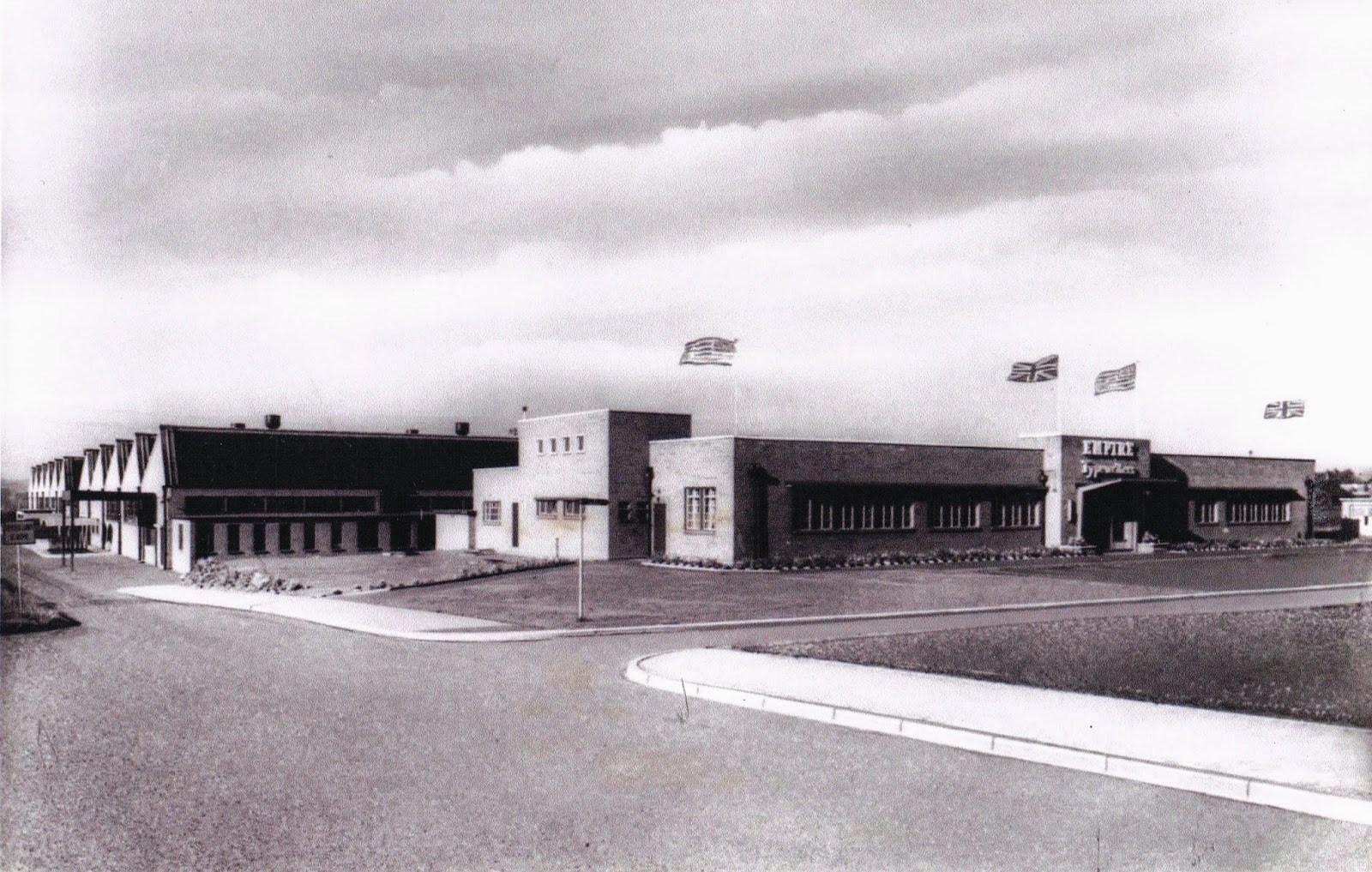 British Typewriters' Empire Typewriters plant on Birmingham Road, West Bromwich, England, at the time of its opening in 1955. 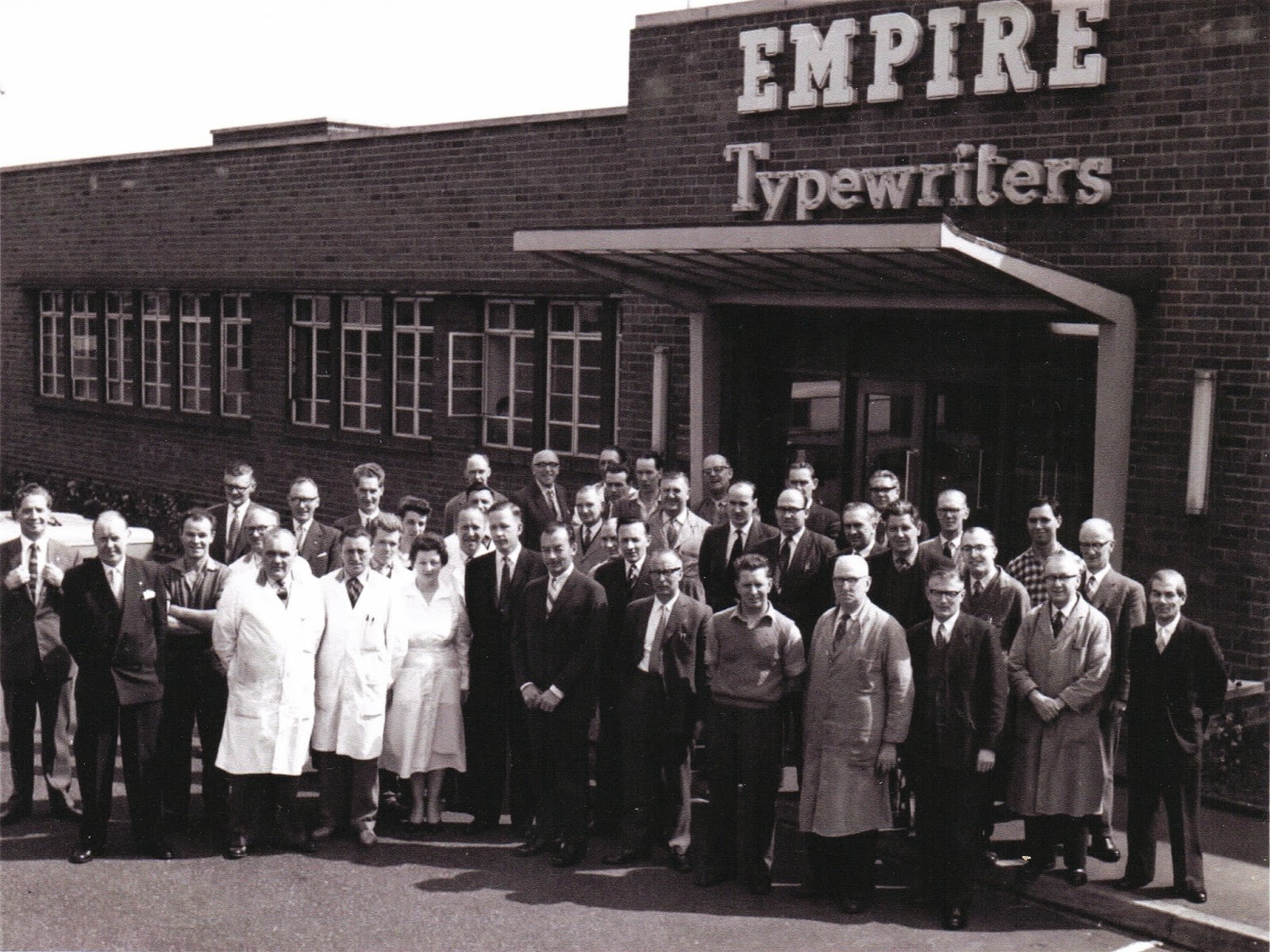 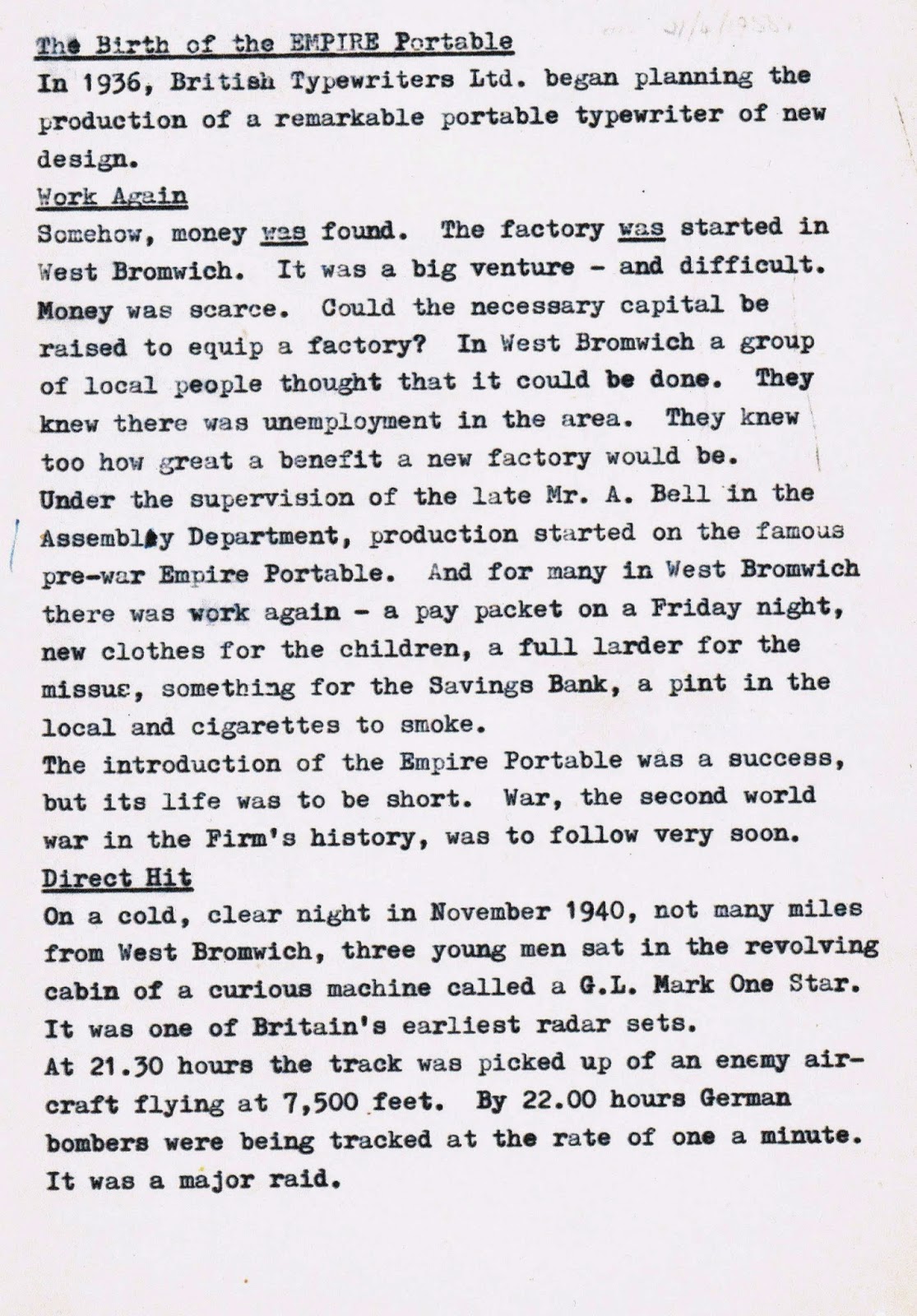 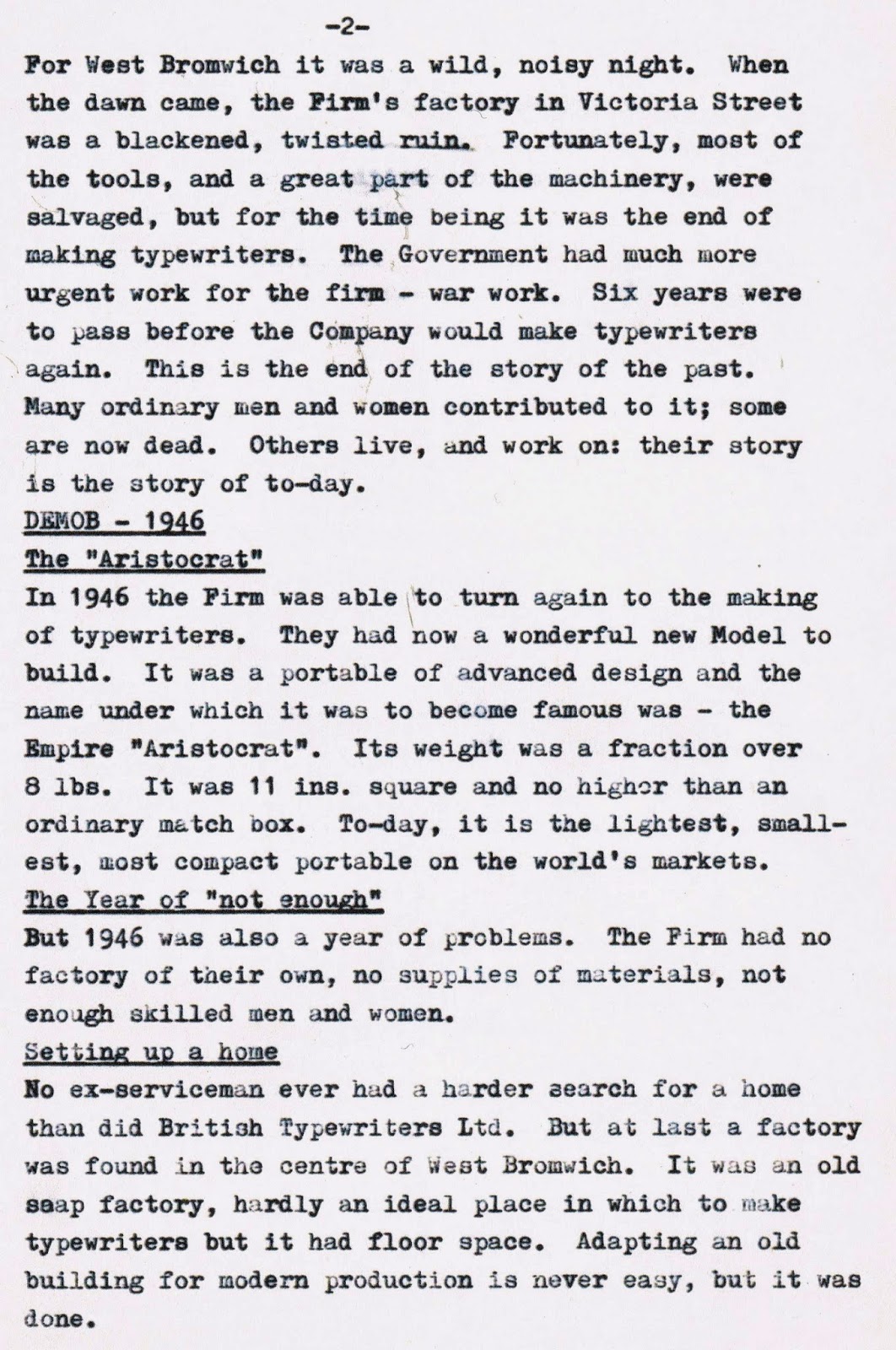 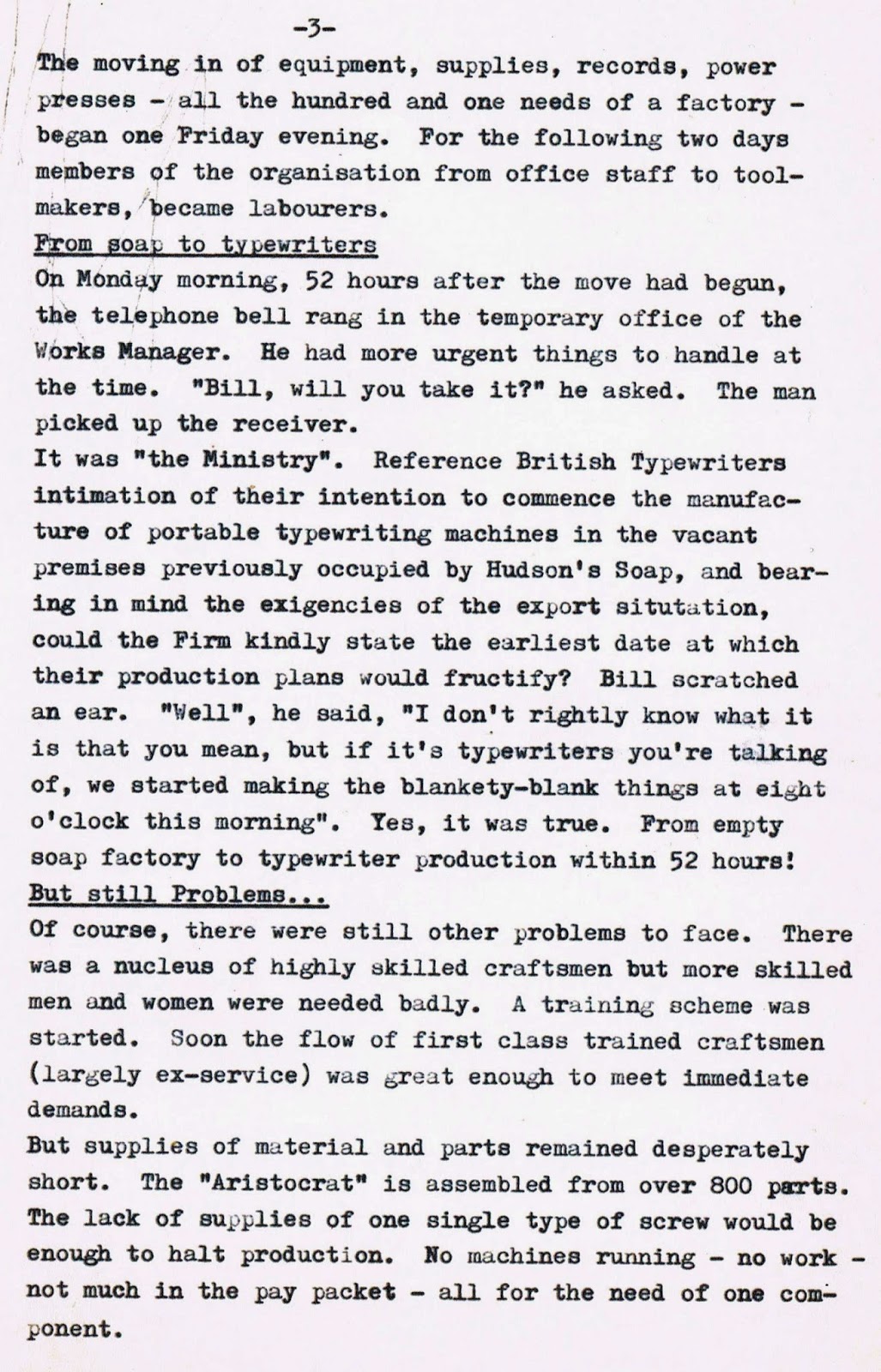 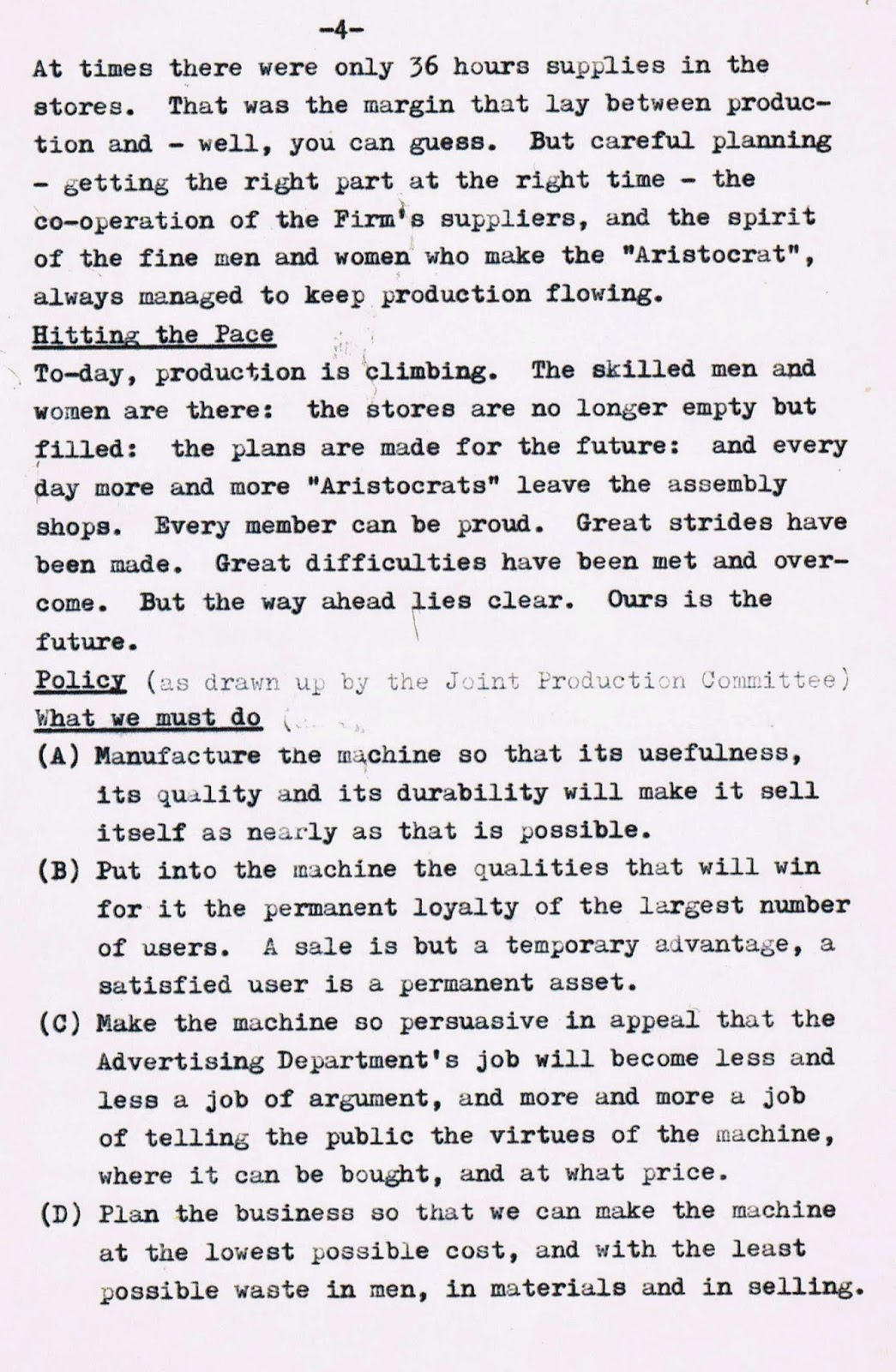 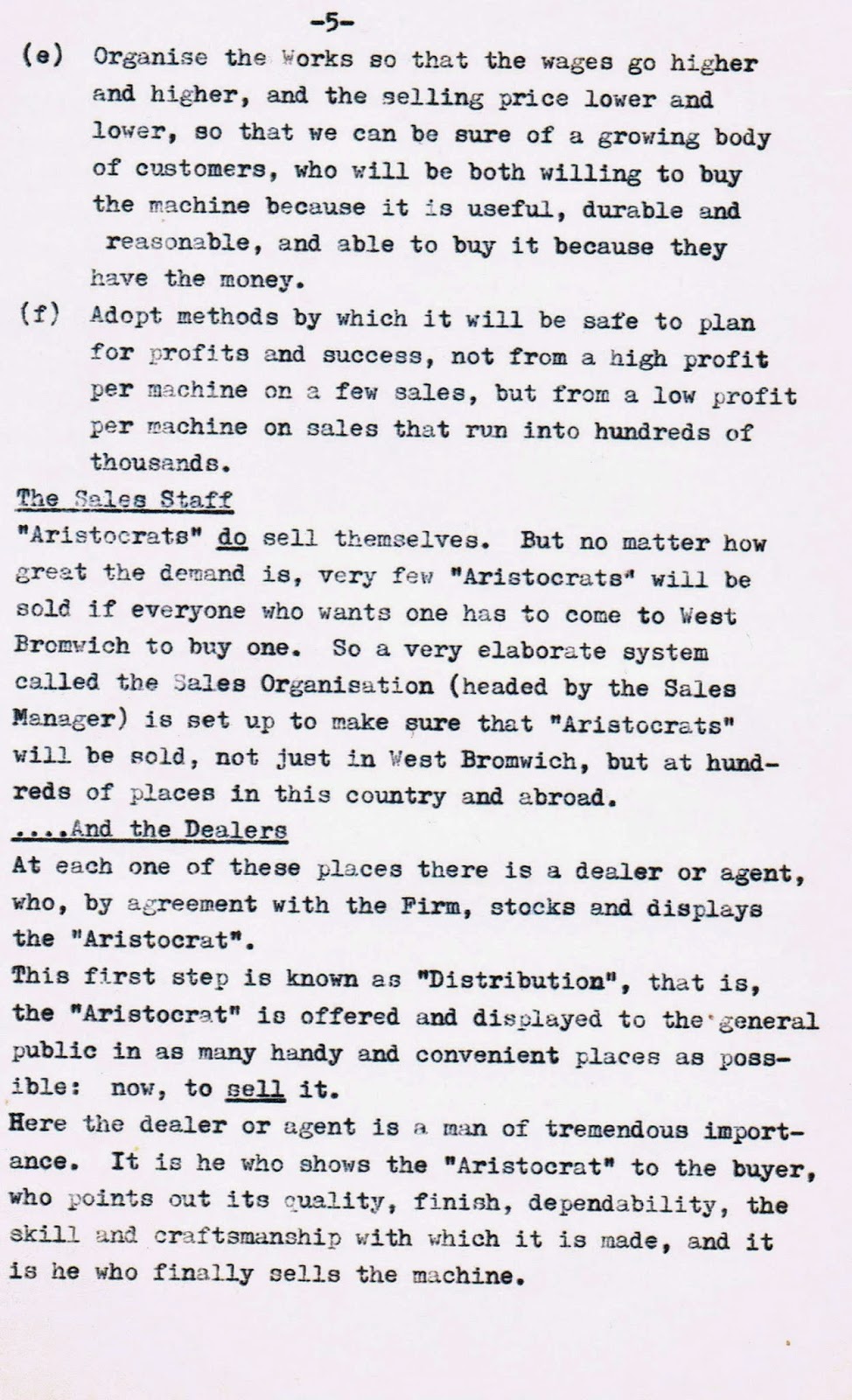 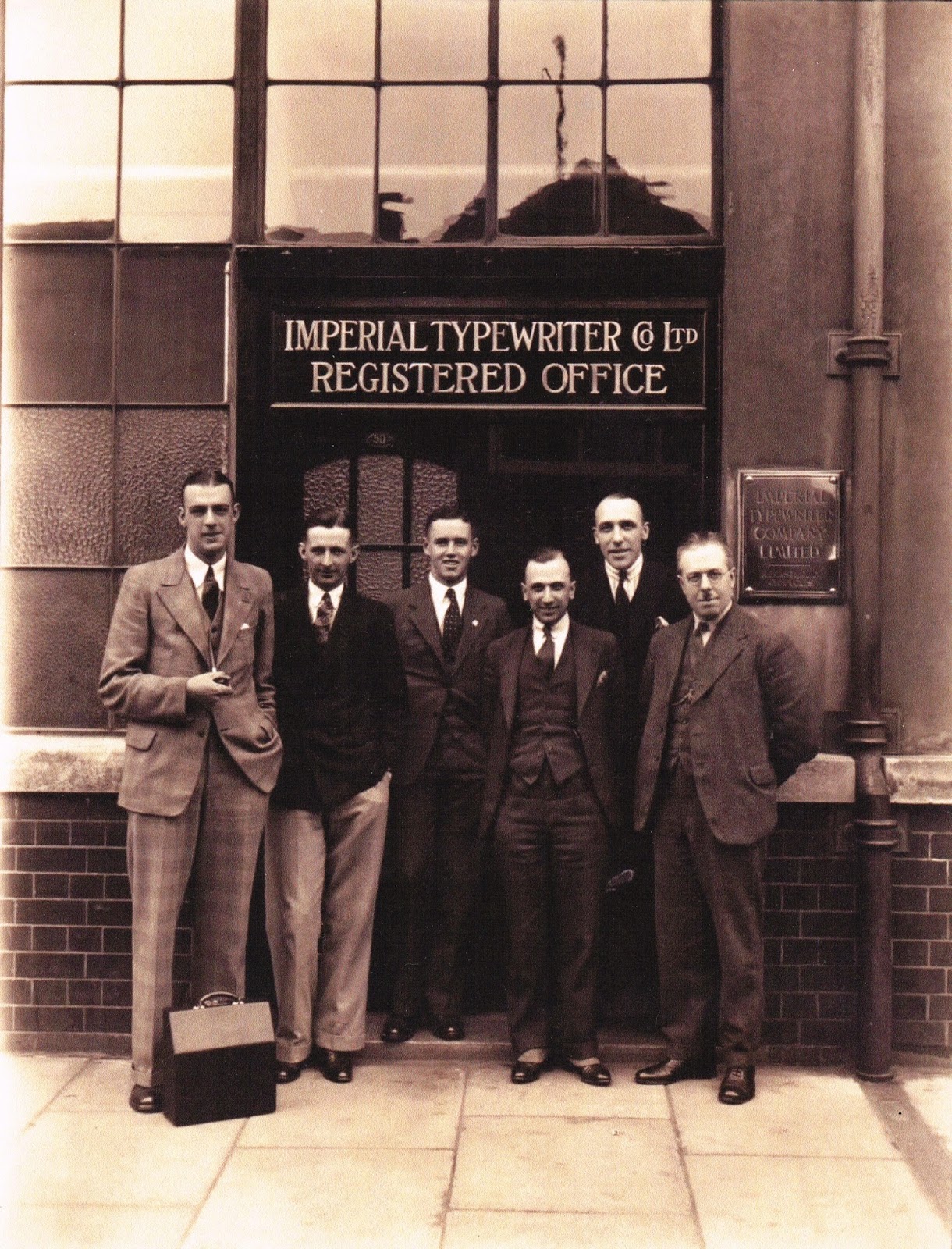 This photograph, taken on May 12, 1931, shows managers of the Imperial Typewriter Company in Leicester with members of the touring New Zealand cricket team. On the left, with his Imperial 'Regent' portable typewriter, is the team's "special press representative", Orton Sutherland 'Budge' Hintz, of The New Zealand Herald in Auckland. When I joined the Herald in the late 1960s, Hintz was my editor. His biography can be seen here.  Hintz and Bill Mawle became friends and Hintz gave Mawle a copy of his 1955 book Trout at Taupo. That copy is now in the possession of Mawle's grandson, Guy Mawle, a fisheries expert, who regards it as "one of the best angling books ever written". In this photo, Mawle is second from the right. On the far right is the great Imperial design engineer Arthur Bott Pateman, who had joined the company in 1910 and was the designer of the 1926 Imperial Model 50 demountable standard. In 1931 Pateman was a company director and general manager. He went on to become managing director and chairman of Imperial.
Below is Mawle's typewritten curriculum vitae, and below that his obituary from December 31, 1971: 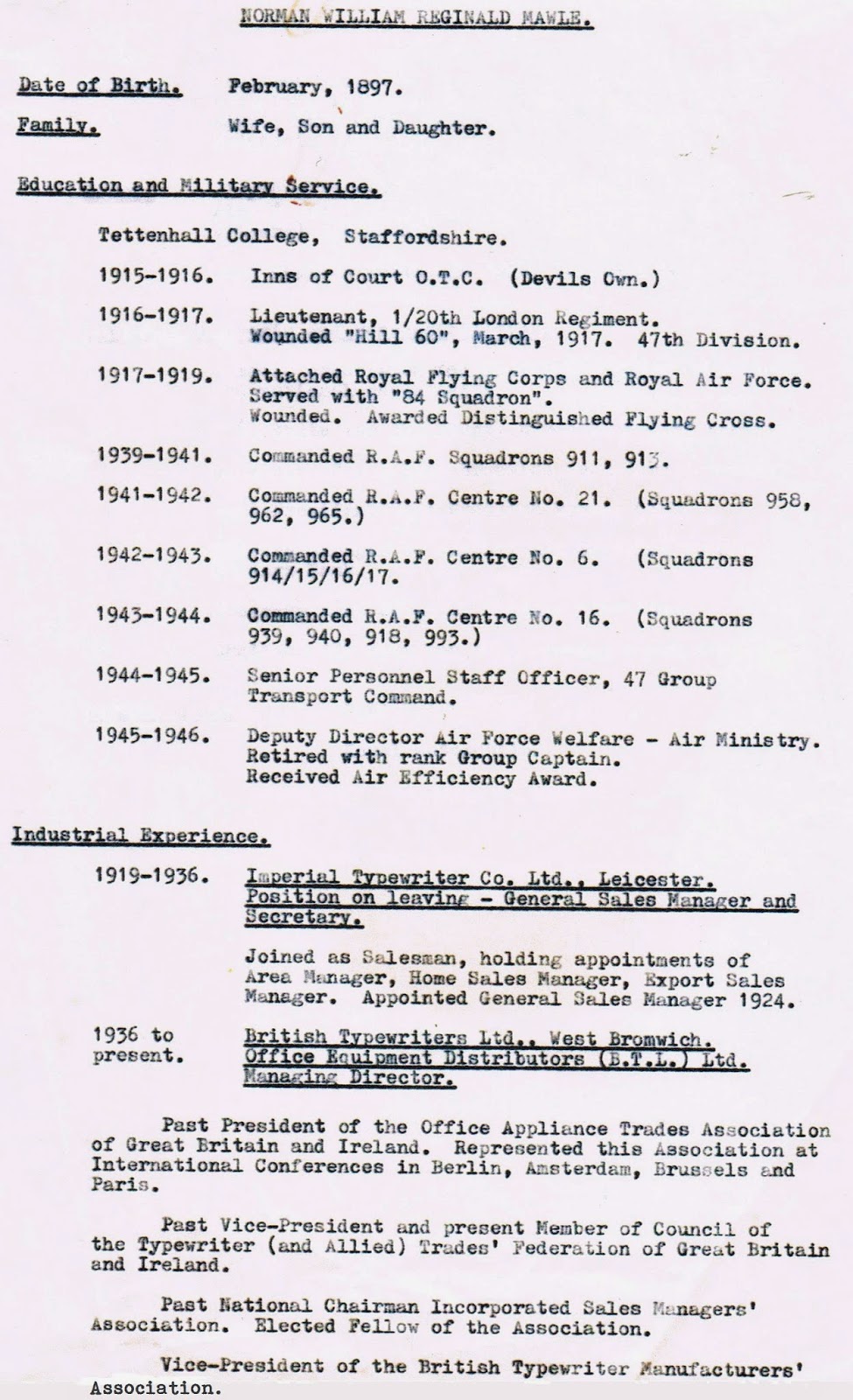 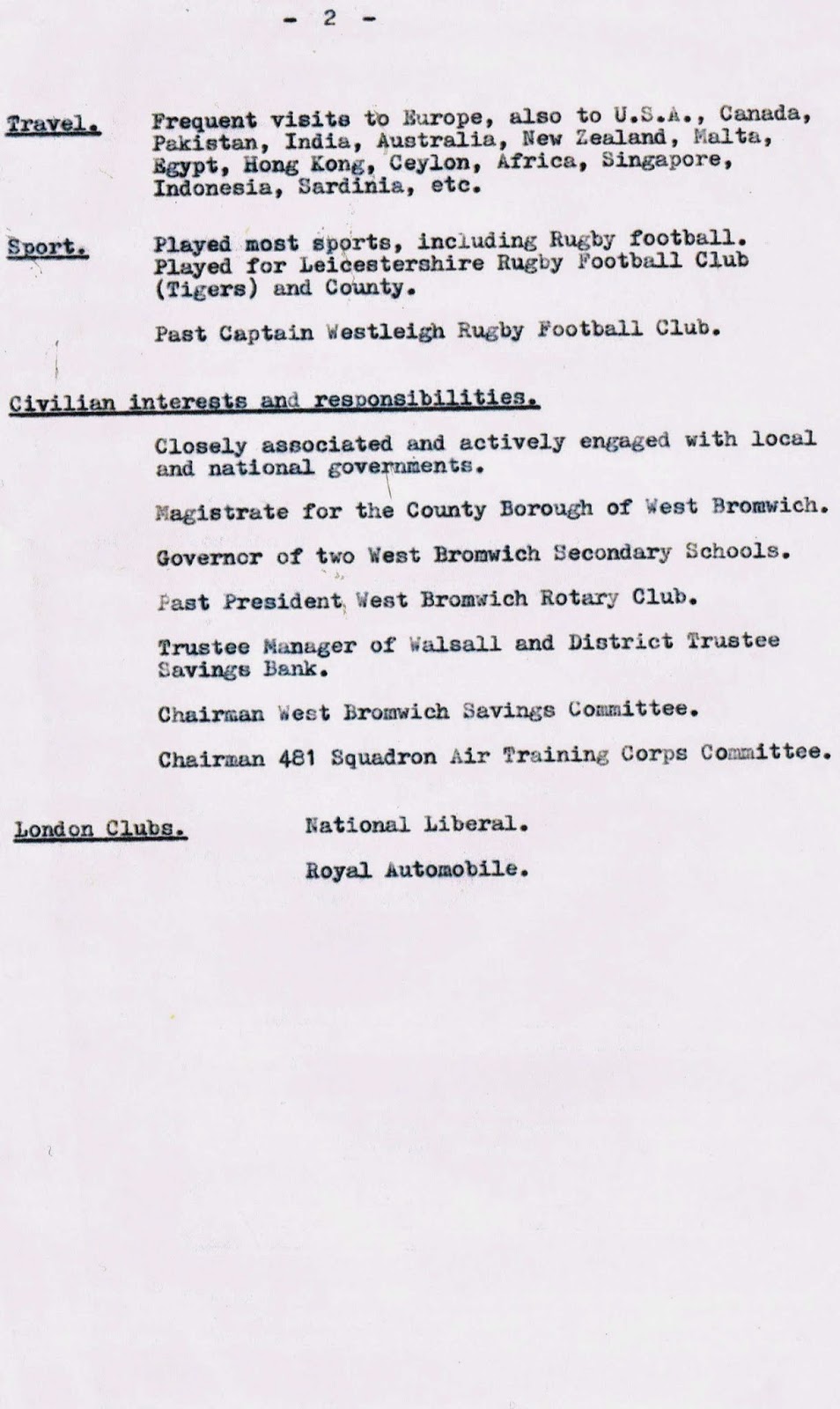 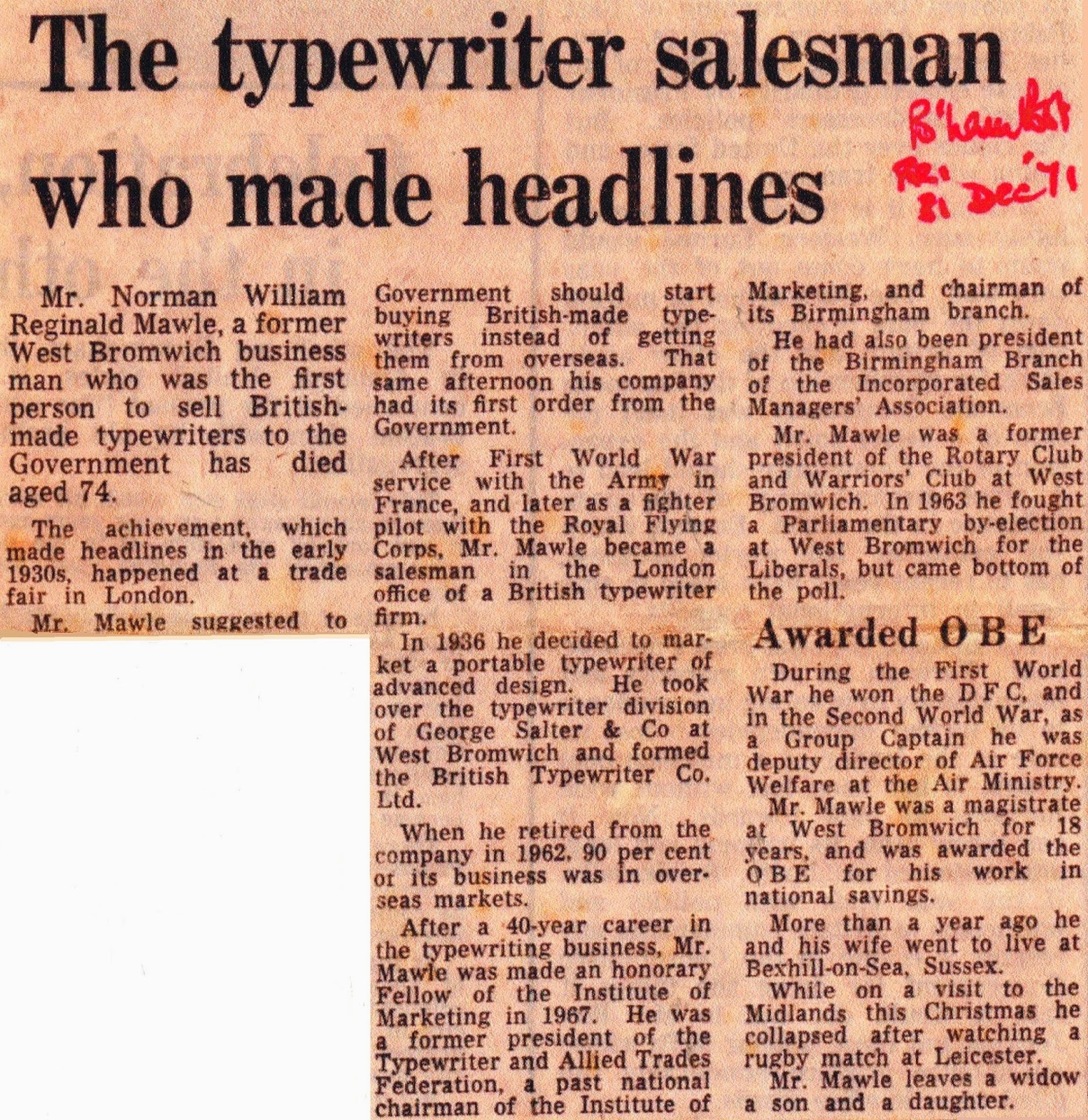 I like his list of "What we must do." I was going to pick one or two, but they are all good. Too bad businesses to day do not follow some of them.

Super you could unearth this precious information - I have been looking for this for a while but obviously you have some Magic Talent to find even the impossible! Cheers

Another invaluable reference. And yes, the Aristocrat I picked up on Gumtree last week did "sell itself"!

Ooh, I don't suppose Guy Mawle happens to have an Empire/British Typewriters serial number age list in all his treasure trove of info?

That could be real handy in updating the Empire serial number page (:

thanks for the history! Based on his philosophy, he was certainly the right person for the job!