Fly Me to the Moon, Let Me Type Among the Stars 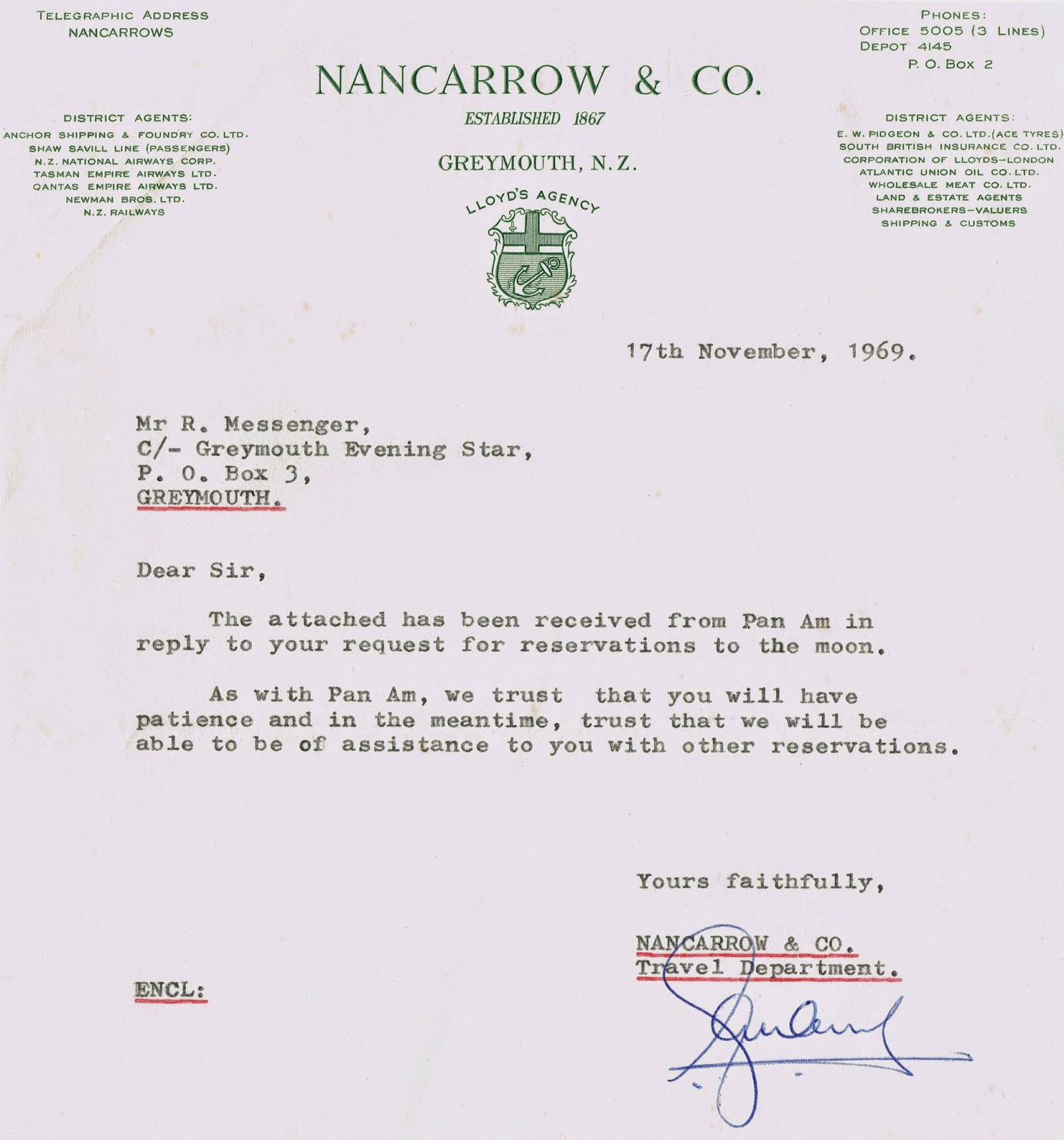 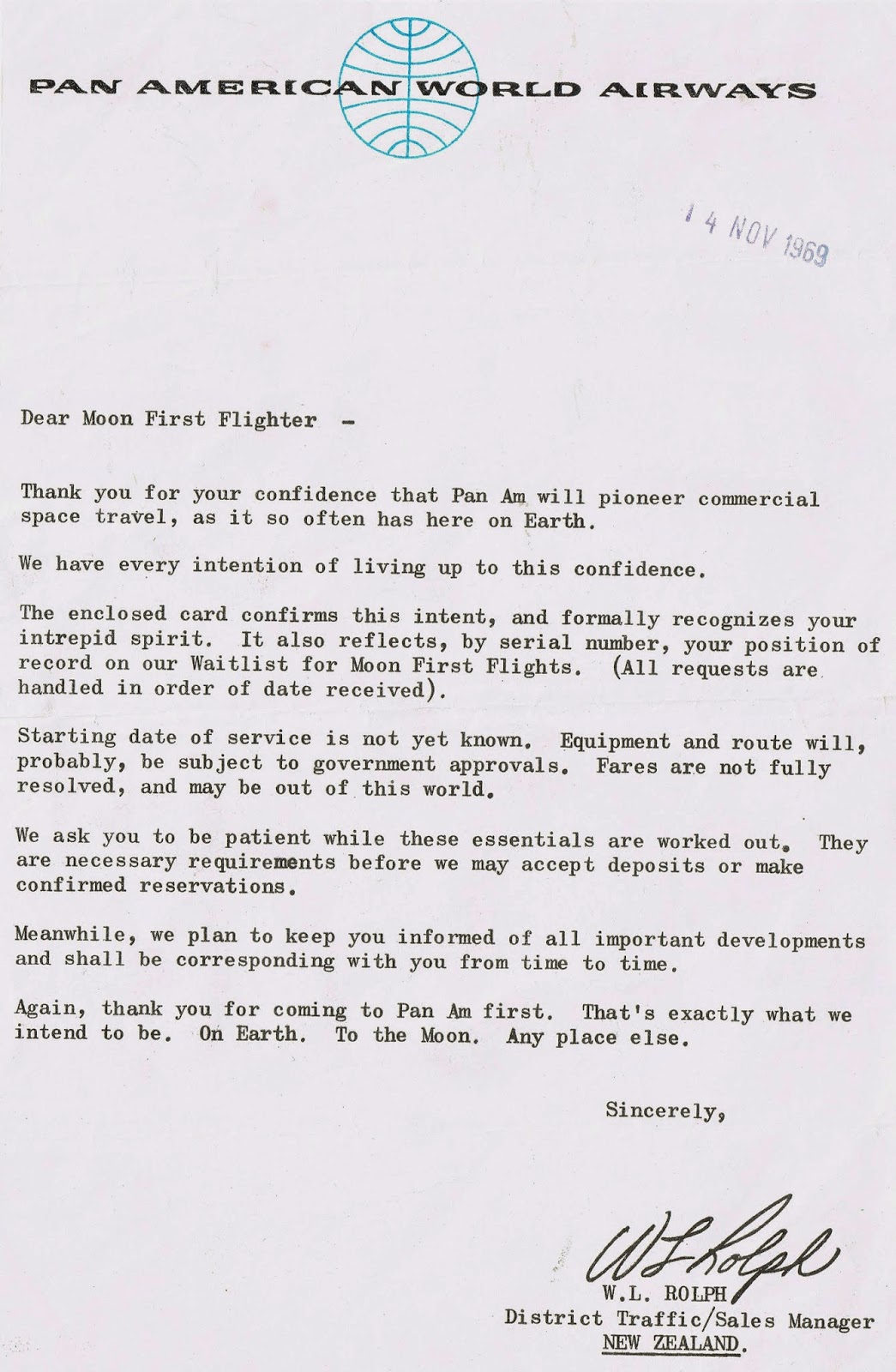 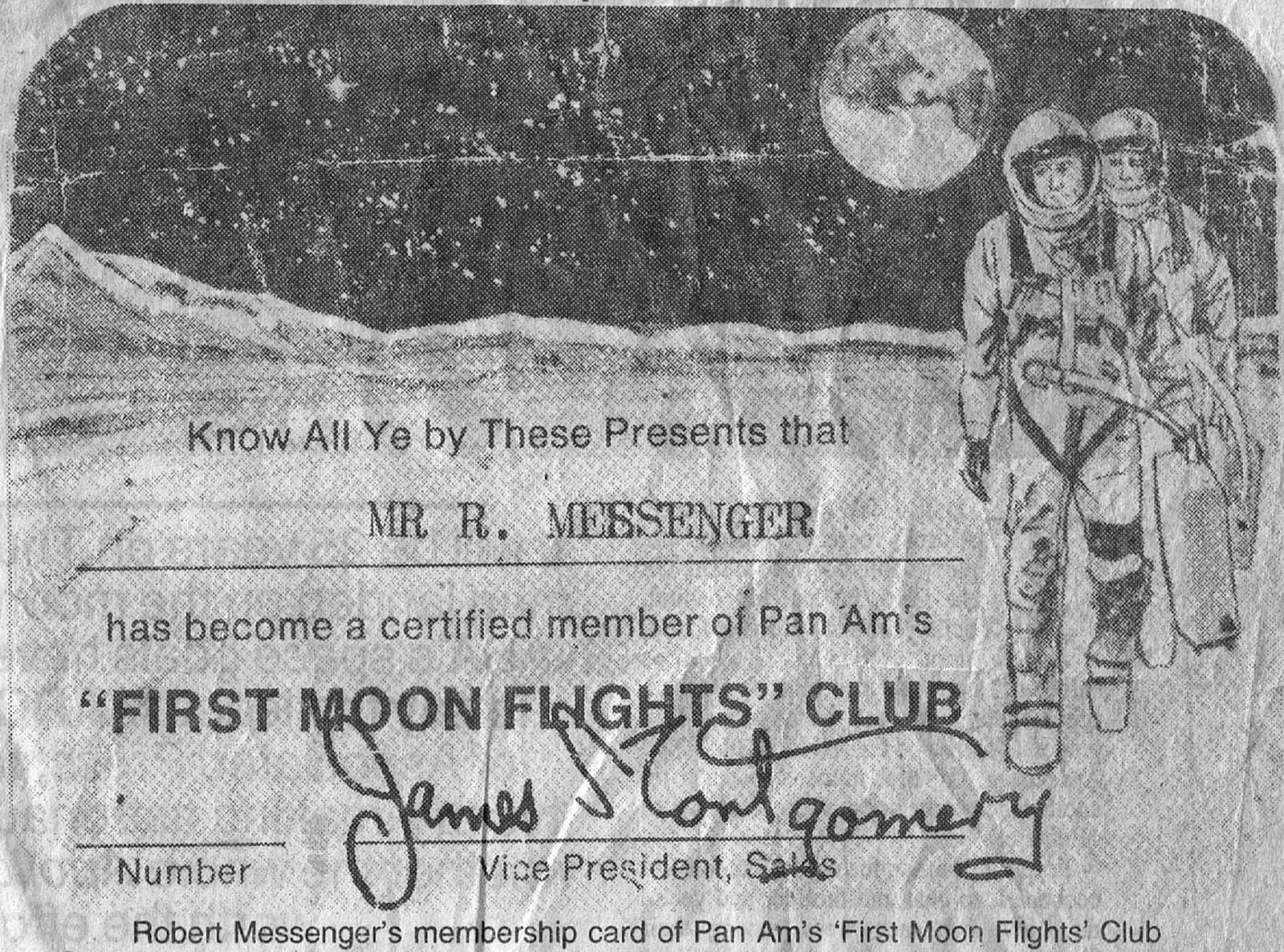 I've mislaid the original coloured ticket. Not that Pan Am is around any longer to honour it.
The queue was so long I had lost sight of the fact that I was even a part of it. The check-in counter was far from view and my interest in the destination was fast waning. I was booking my Pan Am flight to the moon, way back in 1969, thinking it was the fun thing to do in the year of the first lunar landing.
Then it all came back. On the 40th anniversary of ''one giant leap for mankind'', a letter to the editor of The Canberra Times appeared. It came from Christopher Davis, of Carwoola in New South Wales, and he asked about an article the Times had published in 1968, concerning a Canberra family which had booked flights to the moon through Pan Am. Had the family ever thought about it again? Davis wondered in print. Did Pan Am, before its demise in late 1991, ''ever correspond upon the matter?'' ''The fact that we were to see man walk upon the moon, just a year later, probably gave them some hope of this incredible prospect coming true,'' wrote the Carwoola correspondent.
I was in awe of a memory that could recall such lightweight material. And given my own experience with lunar flight bookings, I determined to help answer at least some of these questions.
Somewhere, among my mountain of souvenirs, is a card from Pan Am registering my place in the queue to board a moon flight, and letters from representatives of both the travel agent, Nancarrow and Co, and from Pan Am itself, expressing thanks for my interest in taking part in the unworldly trip. The letters were worded with a tongue firmly in cheek, in keeping with the spirit of the ticket application, yet the whole package had been put together with a carefully constructed air of authenticity. But what precisely had Pan Am and the travel agent offered me in 1969? Was there any hint of a promise to which, all these years later, they might have been held if Pan Am had itself been held together? What was the exact wording on the flight booking card? What was my actual waiting list number? Something well above 25,000, if memory serves me right.
And so I went looking for my moon flight ticket and letters among the clutter of papers housed in my large yet overflowing shed. I was expecting to unearth the sort of fine detail I believed had served me well these past 50-odd years. But my lunar travel documents were nowhere to be found.
My friend Elizabeth expressed due sympathy for this plight, in hunting through the shed for something I knew was there but could not turn up. She may well have inwardly welcomed the sad news, since she has been gently trying to wean me off my dependence on detail for some time now. More of the germane, she has been clearly indicating, and much less risk of ennui among my readers.
There are reasons why, for the time being, I have been having difficulty laying hands on the things I go looking for. Suffice to say here that said shed is a jumble stacked to the beams with books, journals, magazines of many hues, newspaper clippings, photograph albums, typewriters, typewriter bits and pieces, typewriter cases, CDs, DVDs, videos, vinyl albums and sundry other reminders of a life littered with compulsions and obsessions. Oh, not to mention battery-powered clocks, scaled model sports cars and soft toy lions. (If anyone knows of a worthy destination for a wince-making number of toy lions, please let me know.)
Things aren't quite as bad as the 1500 gnomes left ownerless and homeless in Cootamundra this week, or the shopaholic found dead and buried under an avalanche of bric-a-brac in England, but they're getting there.
Condemned to continuing this column without the obligatory detail, I sat down to sulk - another lifelong habit - and read the Literary Review. And lo, what should I find there but a review by David Profumo of a book called Collections of Nothing, by William Davies King.
Profumo opened by confessing to ''vague concerns about my multifarious collecting habits ... I have accumulated many hundreds of stuffed kittens, sections of barbed wire, tobacco pipes, items of bondieuserie, fishing floats, wine corks and shaving-foam tins. Entire regions of the house have been made over to assemblages of wrapped soap or cigarette packets dating from the 1973-81 period when I was still smoking for England.
"Now, it seems, my various obsessions are but a foothill compared with the K2 summit that is the lifetime's achievement of Professor King. "However recherché your chosen specialism, there are always other collectors out there, harmless eccentrics devoted to everything from teddy bears (arctophily) to Camembert cheese labels (tyrosemiophily).''
Profumo says King came to realise ''that this habit was an attempt to lend the illusion of permanence to a domestic world where nothing was otherwise reassuring''.
No doubt I have been inflicted by any number of ''philies'' over the years, notably "grafomichaniphily" (typewriter collecting), but Profumo's review made me suddenly start to feel an awful lot better. It struck me that as my life continued to seek an illusion of permanence, I should rely less on the fine detail so integral to compulsive collecting. I began to feel as if, indeed, armed with this knowledge, I could fly to the moon and, yes, type among the stars.
Posted by Robert Messenger at 22:49

Great story! I would've queued too - only I was one month old at the time of the landing...
From what I read on your blog it seems that you have typed among the stars for the most of your life - and I bet some of those occasions sent you over the moon.