Atatürk, the Sultan, his Harem, the Remington 7 Arabic-Ottoman Typewriter and its Role in a Zionist Charter for Palestine 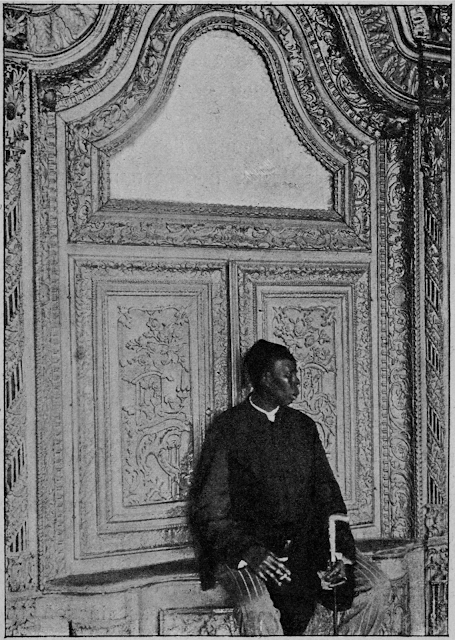 No typewriters shall pass this door. A eunuch guards the harem of Sultan Abdülhamid II, photo by Russian journalist Vlas Mikhailovich Doroshevich (1864-1922).
One of the more disturbing revelations (at least for me) to emerge from events last month marking the centenary of the Anzac landings at Gallipoli concerned the Turkish reinterpretation of the 1915 conflict as a holy war. The Australian politely described the move as contrary to "Gallipoli tradition". 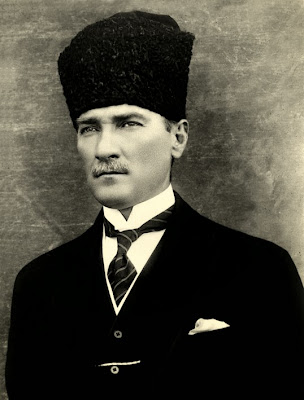 The real hero of Gallipoli: Mustafa Kemal Atatürk in 1923
Apparently young Turkish students are being taught the revised version of their history, to the neglect of Gallipoli hero and avowed secularist ­Mustafa Kemal Atatürk, the army officer, revolutionary and first President of Turkey who is credited with being the founder of the Republic of Turkey.
Such teachings are being guided by Turkey’s Islamist President Recep Tayyip Erdogan, whose push to view Turkey’s military triumph at Gallipoli as a victory for Allah reflects growing tensions between ­Islamists and secularists in his country. Erdogan's shift towards Islamism includes an ambivalence towards ISIS, terrorists who have no apparent regard for history. One Australian newspaper said the rise of the "new Turkey" was "scary".
Whatever the Prophet Muhammad's influence on the defence of Gallipoli, it was the more immediate impact of Atatürk and his resolute forces which won the undying respect of Australians and New Zealanders, and not just the Anzacs.
Following the defeat of the Ottoman Empire in World War I, Atatürk led the Turkish National Movement in the Turkish War of Independence and established a provisional government in Ankara. He then embarked upon a program of political, economic and cultural reforms, seeking to transform the former Ottoman Empire into a modern and secular nation-state. Under his leadership, thousands of new schools were built, primary education was made free and compulsory, and women were given equal civil and political rights, while the burden of taxation on peasants was reduced. The principles of Atatürk's reforms, upon which modern Turkey was established, are referred to as Kemalism.

One of the more notable events reflecting Atatürk's modernisation of Turkey came on November 1, 1928, when he introduced the new Turkish alphabet and abolished the use of Arabic script. The new alphabet was a variant of the Latin alphabet, its adoption was quick, and literacy rose from 10 per cent to more than 70 per cent within two years.
As a direct result of this change, Atatürk was in 1929 able to lift the ban on the importation of typewriters. The ban had been put in place in 1901 by the 34th Sultan of the Ottoman Empire, Abdülhamid II, following the arrival in Turkey of a consignment of 200 US-made typewriters. The Turkish Government announced that its customs department had blocked their entry on the grounds that, armed with a typewriter, "anyone would be able to type seditious writings without fear of comprising himself". The department erroneously believed there was "no characteristic about typewriting by which the authorship can be recognised - there is no distinct feature about it, as with handwriting, by which the person who used the machine can be traced". The US Embassy tried unsuccessfully to convince Turkish authorities to "take a more reasonable attitude".

Sidney Nowill
From 1919 the Remington Typewriter Company's agent in Turkey was Englishman Sidney John Payn Nowill (1894-1956), based in Moda outside Constantinople (now Istanbul). But typewriter sales were at that time still limited to foreign companies with branches in Turkey and to missions. With the introduction of the new alphabet, the Turkish Government's equipment supply department, the Devlet Malzeme Dairesi, immediately set about importing 4000 Latin alphabet typewriters. Nowill negotiated the deal for Remington, allowing little mark-up for himself on Remington's cut price offer. Remington rewarded its agent with 100 free typewriters, a rare act of generosity by this notoriously frugal company. The US Government also used Remington and Nowill as go-betweens with Leon Trotsky, who from February 1929 until 1933 was in exile at Büyükada off the coast of Constantinople.
This background leads us to the saga of the one-off 1901 Remington Model 7 Arabic-Ottoman standard typewriter.
The intriguing and hugely involved story has been difficult to piece together, because of its many divergent parts. The slender threat holding it all together is this single typewriter. 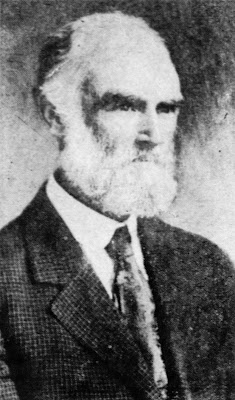 Robert McKean Jones
The typewriter was specially designed for the Ilion company by Robert McKean Jones, with the linguistic aid of American Semitic scholar and Zionist Richard James Horatio Gottheil. Remington made the typewriter at the request of Austro-Hungarian journalist, political activist and writer Theodor Herzl. It was basically aimed at being a bribe to induce the 34th Sultan of the Ottoman Empire, Abdülhamid II, to allow Herzl to attempt to negotiate with the Sultan for a Zionist charter of Palestine. Herzl's continued offers of the typewriter to Abdülhamid II failed in their objective. According to Anglo-Jewish Zionist leader Israel Cohen in his 1959 book Theodor Herzl: Founder of Political Zionism, a work which closely follows the long-running tale of the Ottoman-Arabic Remington 7, it was ultimately rejected by Abdülhamid II,  much to Herzl's annoyance. Certainly, Herzl's bid to establish a Zioinist charter for Palestine was unsuccessful. However, according to A Global Middle East: Mobility, Materiality and Culture in the Modern Age, 1880-1940,  edited by Liat Kozma, Cyrus Schayech and Avner Wishnitzer and published by I.B. Tauris this year, this Remington 7 "was rediscovered during a thorough search of the Sultan's belongings at the Yildiz Palace following his dethronement" [in 1909]. The book goes on to say that the Remington Typewriter Company featured this particular machine as an opening topic in its first issue of Remington Notes, in 1907. 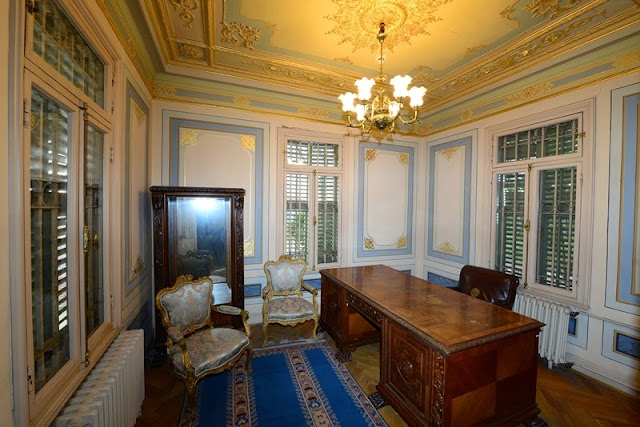 Is the typewriter still here?: Opulence in the Cihannuma Kiosk of the Yildiz Palace. It appears not to be, but there is a Remington No 92 in the museum of palace collections, the Saray Koleksiyonları Müzesi in Istanbul: 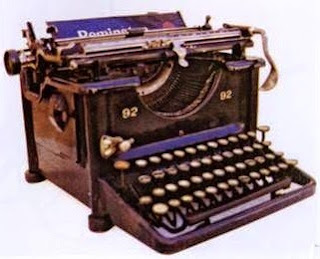 Richard Polt has a 92, which he describes as a Hebrew version of the Remington 12, in his collection. Richard dates it to April 1929: 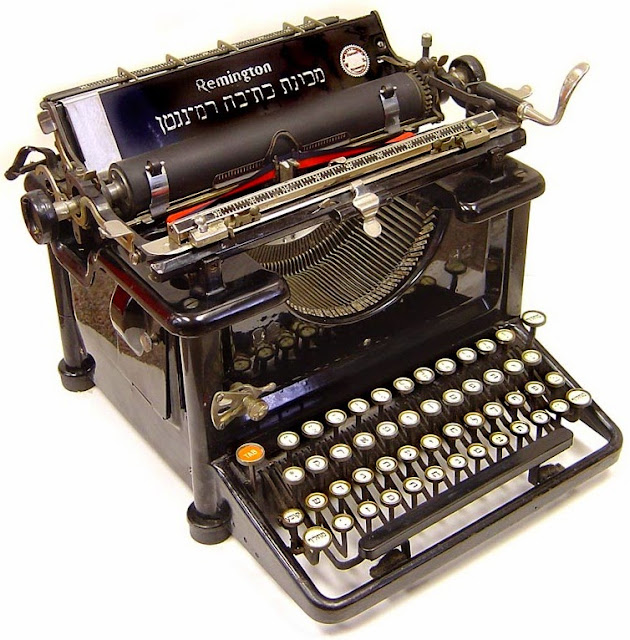 McKean Jones was a typewriter historian, linguist and typographer with Remington. In the 1920s he became the manager of Remington's development department. He was born in Wirral, Cheshire, England, in July 1855. McKean Jones is best known for his Japanese (katakana) and Chinese ("chu-yin tzu-mu") phonetic alphabet typewriters (adaptations of existing Remington typewriters). Henry Harper Benedict said McKean Jones was "the most prolific writer on typewriter topics and perhaps the best authority [on typewriters] in the world".  With William Ozmun Wyckoff, McKean Jones wrote a history of the typewriter in (Johnson's) The Universal Cyclopedia of 1900. McKean Jones died in his winter home in Stony Point, New York, on June 19, 1933. 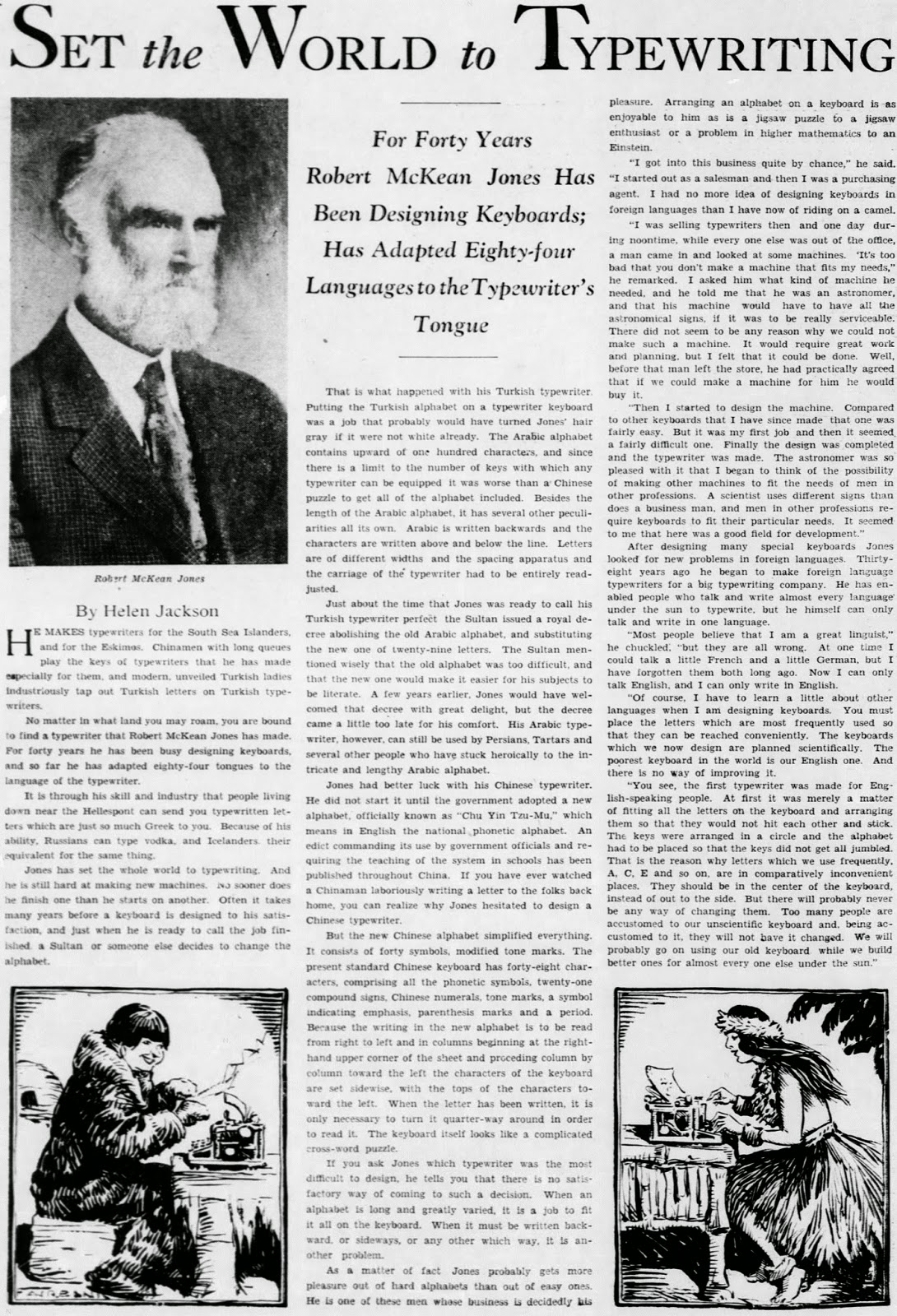 An inaccurate article (at least in terms of who ordered the change to the Turkish alphabet) on McKean Jones appeared in The Brooklyn Daily Eagle on June 16, 1929. 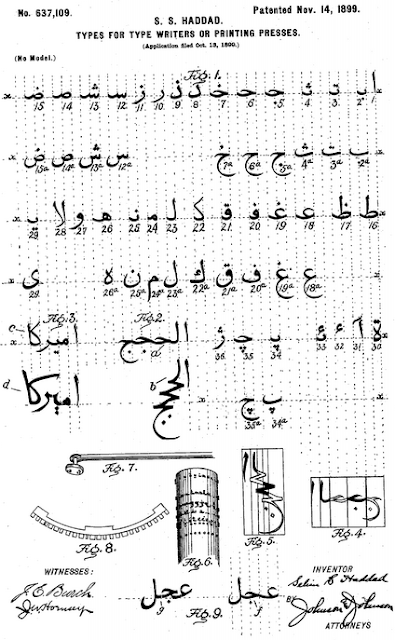 Syrian artist Selim Shibli Haddad (1864-) patented this Arabic type for a typewriter while living in Cairo, Egypt, in 1899. His machine is said to have been made by Smith Premier in 1904. It followed McKean Jones's 1901 Remington 7. Arthur Rhuyon Guest and Ernest Tatham Richmond, of London, England, also patented Arabic type, later in 1899. In the following years, attempts to design Arabic language typewriters were made by Charles E.Smith for the Union Trust (1912), Vassaf Kadry of Constantinople for Underwood (1914), John Henry Barr and Arthur William Smith for Remington (1917) and Friedrich Wilhlem Müller in Dresden, Germany (1925).
Another claim for an Arabic typewriter, made by Royal, came from Palestinian-American literary theorist Edward Wadie Said on behalf of his father, Wadie Said, a businessman in Jerusalem in the British Mandate of Palestine. Said senior served in the US Army component of General John J. Pershing's Allied Expeditionary Force in World War I. He and his family were granted US citizenship due to his military service and moved to Cleveland before returning to Palestine. In 1919, Wadie Said established a stationery business in Cairo. He was a Protestant Christian.

Müller
Theodor Herzl (1860-1904) was one of the fathers of modern political Zionism. He formed the World Zionist Organisation and promoted Jewish migration to Palestine in an effort to form a Jewish state. In Constantinople in June 1896, Herzl gained the assistance of Count Filip Michał Newleński (Philip Michael Nevlenski), a sympathetic Polish émigré with political contacts in the Ottoman Court, in an attempt to present his solution of a Jewish State to Sultan Abdülhamid II. Herzl was able to put his proposal to the Grand Vizier, Khalil Rifat Pasha: the Jews would pay the Turkish foreign debt and attempt to help regulate Turkish finances if they were given Palestine as a Jewish homeland under Turkish rule. Five years later, on May 17, 1901, Herzl did meet with Abdülhamid II, but the Sultan refused Herzl's offer to consolidate the Ottoman debt in exchange for a charter allowing the Zionists access to Palestine. 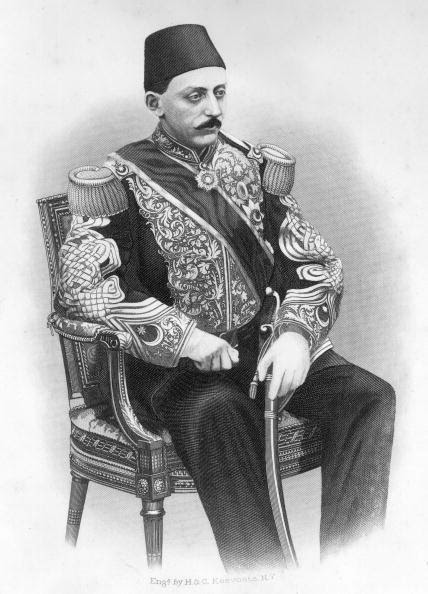 Sultan Abdülhamid II
In his book, Israel Cohen said Herzl's many subsequent letters to the Sultan remained unanswered. In December 1901 "he sent still a further letter to inform the Sultan that the Zionist Congress would be meeting again in a few days' time, that he would dispatch a message of homage at the opening of the proceedings, and would be grateful to receive in reply an expression of his Majesty's goodwill. To make as sure as he could of a favourable response, he informed [Turkish statesman and administrator Cihangirzade] İbrahim Bey, in a covering letter, that he had obtained a typewriter with Turkish-Arabic letters, specially made in America for the Sultan, and that it would be tried out in Europe for the first time at the Turkish Embassy in Vienna." Cohen wrote that Herzl was annoyed that his gift was not accepted.
Abdülhamid II (1842-1918) was the last Sultan to exert effective autocratic control over the fracturing Ottoman Empire. He ruled from August 31, 1876, until he was deposed shortly after the 1908 Young Turk Revolution, on April 27, 1909. Although expected to be a progressive ruler before his coronation, Abdülhamid II suspended the short-lived Ottoman constitution and parliament in 1878 and seized absolute power, ending the first constitutional era of the Ottoman Empire. Often known as the Red Sultan or Abdul the Damned, Abdülhamid II became more reclusive toward the end of his reign as his worsening paranoia about perceived threats to his personal power and life led him to shun public appearances. 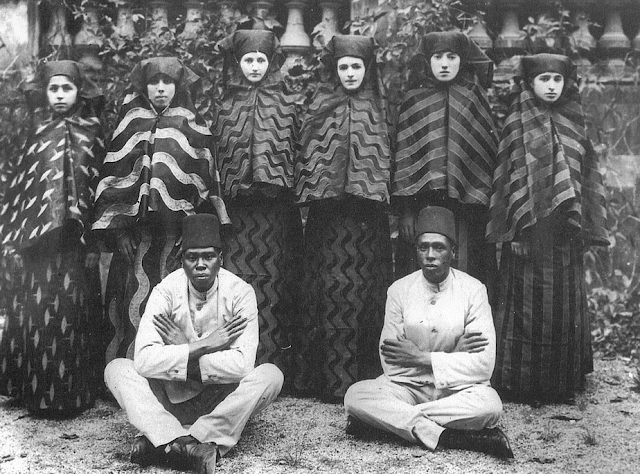 No typewriters for these lassies: A few of Abdülhamid II's harem with their eunuch guards before a trip to Vienna. Another member was apparently a Michigan dancer, Stella Murphy (1878-), who joined the Sultan's "59 other wives" in his "garden harem" in 1893. 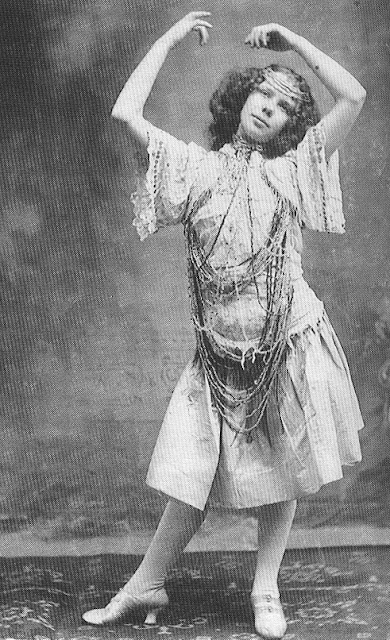 These phobias led to Abdülhamid II banning typewriters from his harem, and to this story appearing in The New York Times on May 20, 1901, just before Herzl's attempt to give his Remington Model 7 to the Sultan: 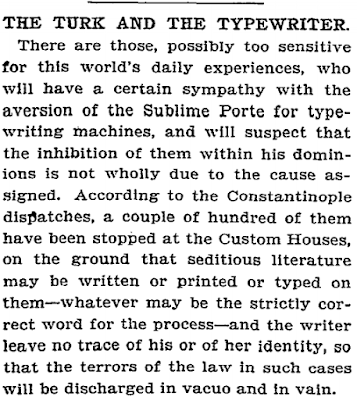 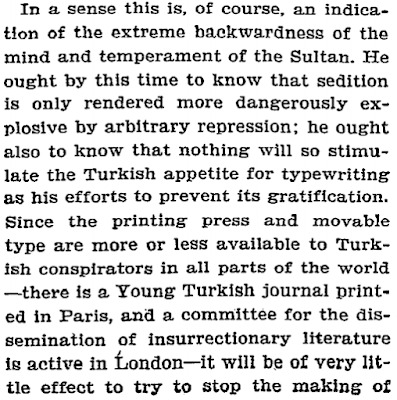 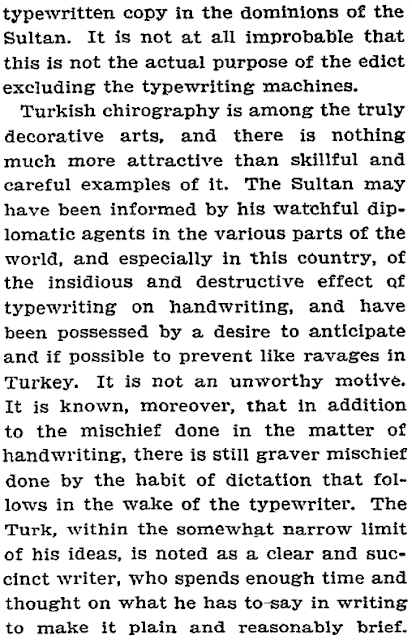 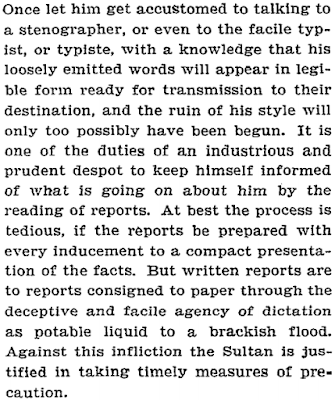 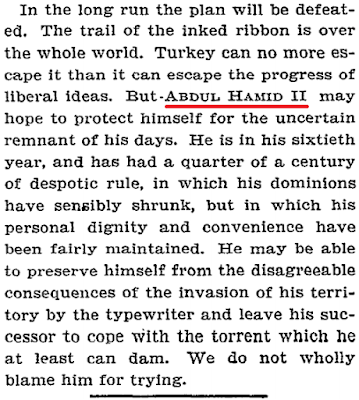 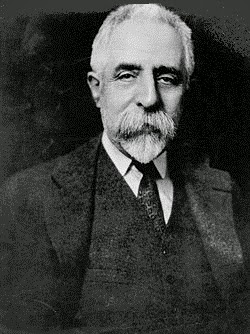 Richard Gottheil
Herlz's assistant in the typewriter project was Richard James Horatio Gottheil (1862-1936), an English-born American Semitic scholar, Zionist and founding father of Zeta Beta Tau Fraternity. From 1898 to 1904 he was president of the American Federation of Zionists and attended the second Zionist Congress in Basel, establishing relationships with Herzl and Max Nordau. From 1904 he was vice-president of the American Jewish Historical Society and from 1901 one of the editors of the Jewish Encyclopedia. He wrote the chapter on Zionism which was translated into Arabic and published by Najib Nassar in his newspaper al-Karmil. 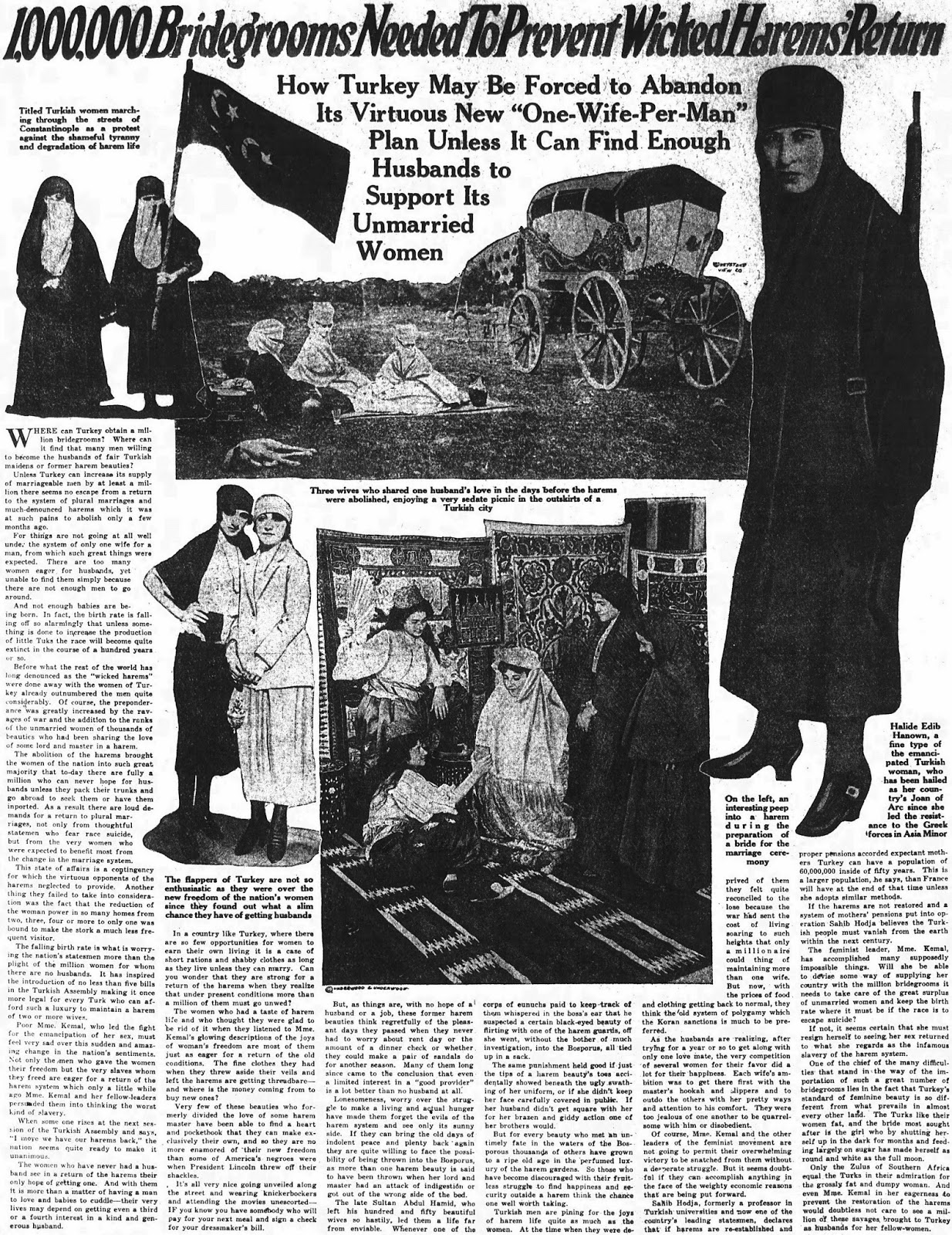 Just a small footnote. I now regularly check Instagram for photos of typewriters, and often they come from Turkey, showing the distinctive Turkish keyboard.

An interesting and rich account, but it would be great to provide some sources too. Where does all of this information come from? I've tried to find a contact link, to no avail, so would be glad to hear from you via email.