Within 24 hours of me posting about the archaic Archbishop of Canterbury Geoffrey Fisher and his 1955 bid to ban typewriters, the US Government revealed that Osama bin Laden was studying Fisher in his hideout in Pakistan when US Navy Seals raided the compound in May 2011. 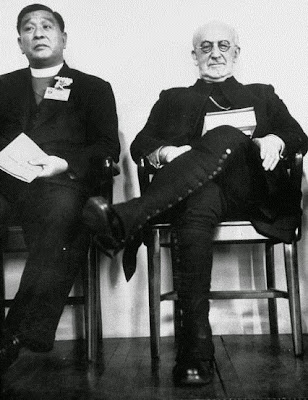 The loopy Fisher, right
My post on the crazy British cleric came four years too late to be of any use to bin Laden, of course. Nonetheless, it might help to explain to the mystified US Office of the Director of National Intelligence, at least in part, why the al-Qaeda leader would have kept profiles of Church of England bishops at his compound. The commandos found a document entitled "Profiles of the bishops in the Church of England" among a stack of English-language files amassed by bin Laden.

US authorities did not release the actual profiles of the bishops bin Laden was interested in, and simply listed the document among 10 other religious files the seals found. Given bin Laden earnestly plotted to send the world back to the Dark Ages, however, it might well be assumed he would have agreed with Fisher's antiquated ideas.
These included:
. Typewriters could cause wars.
. Sunday afternoon drivers were the Britain's greatest enemies.
. At worst the H-Bomb would send a whole bunch of innocent people on their way to another world.
. Although all men were equal within the love of God, they were not equal within the sight God.
. If you weren't a Christian or a Communist you were an amiable nonentity.
. Arguing about capital punishment was very unfair to anyone thinking about murdering someone.
. Authors had succumbed to the last infirmity of a mundane mind.
And yes, Nick Bodemer, he was being serious ...
Posted by Robert Messenger at 11:34

Wow...I'd hate to imagine what he'd think of the Internet. The source of my surprise is the Episcopalians I knew growing up...they were the most delightfully liberal people I have ever known (Especially my grandmother).

Also, if you don't mind my asking: when will your Safari reviews see the light of day?