Type Out, the Hit Single 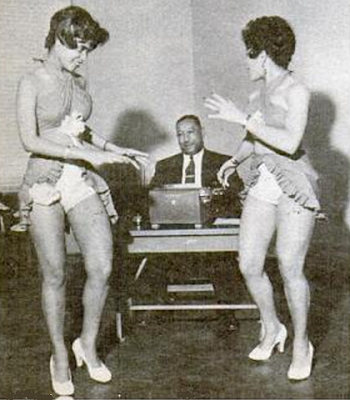 Jet, June 7, 1979
In 1955, world champion speed typist Cortez W.Peters Sr typed on a Royal while June and Joy Gaskins danced to the beat of his key strokes. Could they dance to Type Out? June C. Gaskins Davis, born in Winchester, Virginia, in 1934, worked in the federal government and private industry before working on Wall Street for a decade, retiring from Merrill Lynch, Pierce, Fenner & Smith in 1989 as assistant vice-president, financial consultant. Joyce (Joy) A. Gaskins Jordan was her older sister by a year.

ention of Wite-Out this morning got me thinking - don't ask me how - about one of my great ambitions, one of many that I'm now bound to take to my grave, completely unfulfilled. For years I've toyed with the idea of using the 1963 surfie guitar instrumental hit Wipe Out (I'm a huge fan of early 60s surfie guitar instrumentals, of which Bombora is the best) and replacing Ron Wilson's paradiddle drumming with the pounding of a typewriter, for a track called Type Out. After all, it's almost 65 years now since Leroy Anderson's The Typewriter first came out, so it's way past time we had another typewriter tune on the charts.
Warning: original Boston Pops version with BAD language!
Now, the idea here is to start the movie then wait six seconds and start the silent typing movie. Does it work for you? It does for me.

My youngest son Martin is pretty handy with an electric guitar and knows all about overdubbing. But who would do the fast-paced typing? We could get Jasper Lindell perhaps? Good combo - maybe we could call them the Typharis. But could Jasper maintain the keyboard rage for a whole 2min 12sec? Someone from the Boston Typewriter Orchestra might be more experienced at this sort of thing.
One man who could match the drummer's 300 plus beats a minute was the last officially recognised world speed typing champion, Cortez Wilson Peters, who even at the time Wipe Out was recorded by the Surfaris could still bang out upwards of 140 words a minute, or 15 keystrokes a second. But he died in 1964. 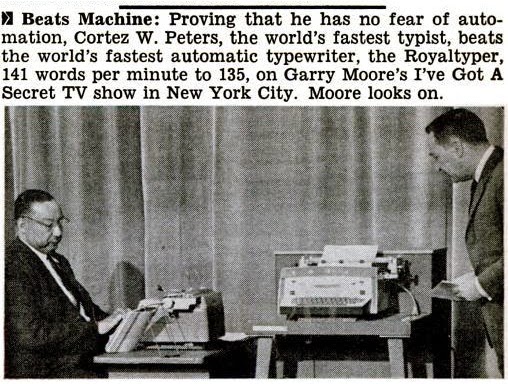 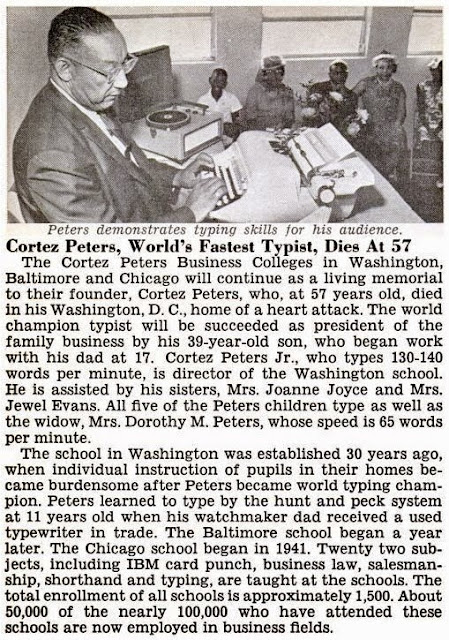 Jet, December 24, 1964
His son, Cortez Wilson Peters Jr, then claimed the title, but by that time official world championships had long since ended. Anyway, Cortez Jr himself passed away in 1993. 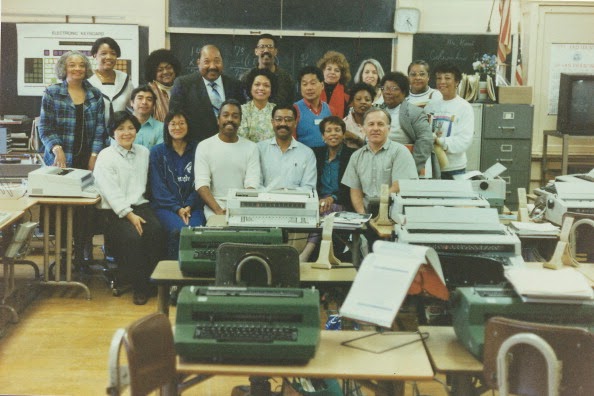 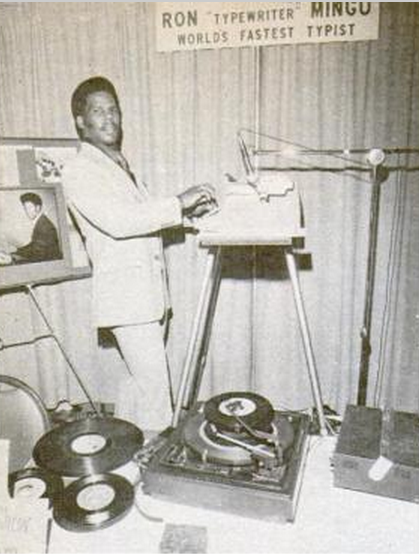 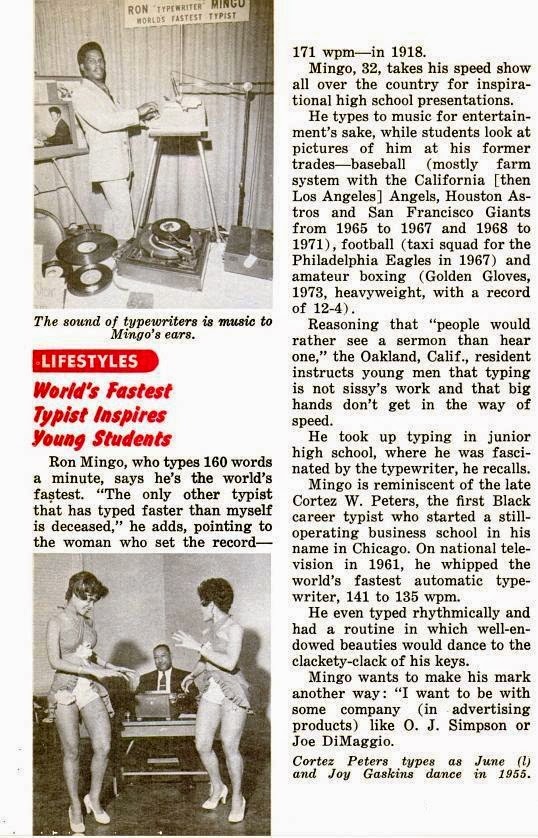 Still, Ron Mingo might be a candidate for our Type-Out band. At least (unlike, I think, Jasper) he has typed to music. And as far as I can tell, he's still alive (he was born on September 1, 1948, 21 months later than Wikipedia, which got the wrong Ron Mingo, would have us believe). Mingo was last heard from playing for the Tri Valley Giants in the Men's Senior Baseball League World Series not so long ago. The 6ft 3in, 225lb Mingo was also once a sparring partner for the likes of George Foreman and Ken Norton. 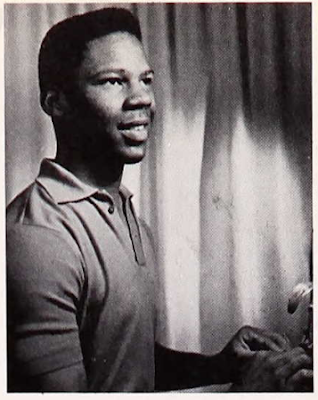 A 16-year-old Ron Mingo as a staff reporter on the John C. Fremont Senior High School (South Central, Los Angeles) newspaper The Pathfinder in 1964. That's one thing he does have in common with Jasper. 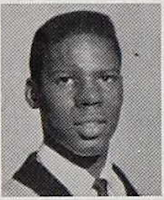 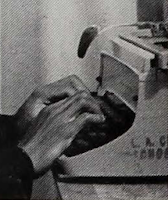 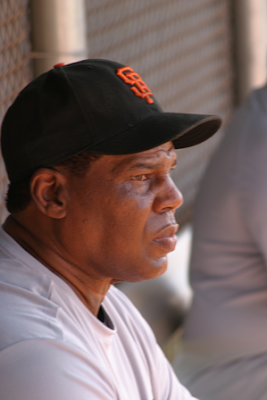 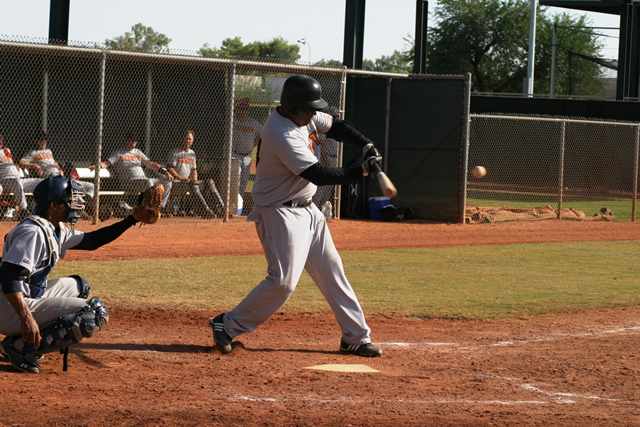 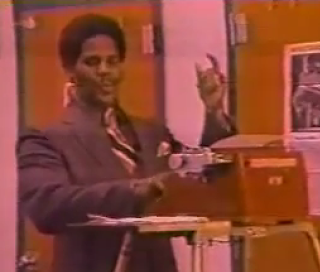 There are numerous YouTube vides showing Ron typing. Here are a couple: 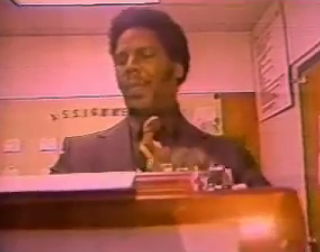 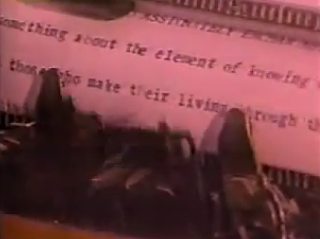 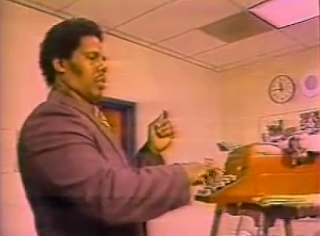 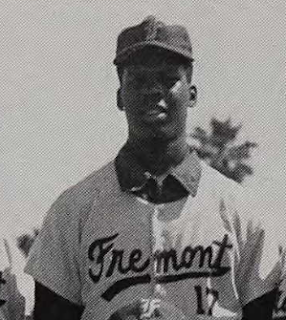 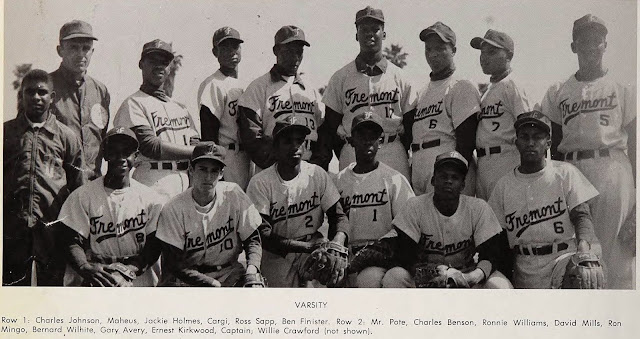 Posted by Robert Messenger at 00:16

Oh yes! "Wite Out," the surf instrumental, must be made to exist if it doesn't yet.