Emma D. Mills: Inventor of the Typewriter. Emma Who?

One young student, earnest and eager to assist with a college Powerpoint presentation addressing a previously unheralded female contribution to mechanical invention, boldly declared: "Emma D. Mills invented the typewriter." Under these startling words she placed a photo of an Olympia SG1. 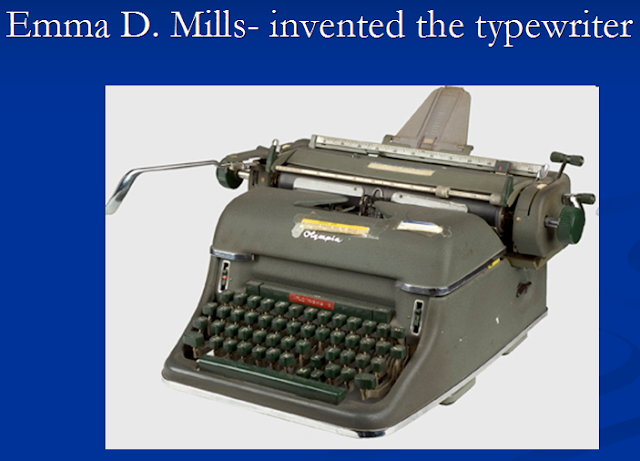 Scientific American, April 4, 1903
Although, from 1889 to 1903, US publications from Scientific American down credited Mills with patenting typewriter inventions, there is no surviving evidence of any such thing to be found anywhere. Apart from as a witness on other, non-typewriter-related patents, Emma D. Mills comes up in no patent search.
And that pretty much goes for Mills' whole life - almost nothing is known about her. 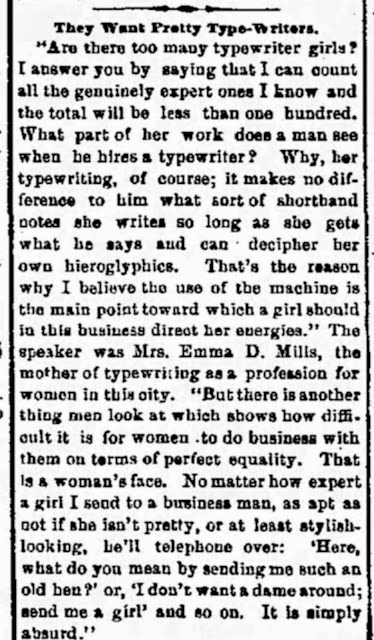 For once, I have to confess I am stumped. Days of research have failed to unearth anything but the most rudimentary facts about Emma D. Mills. 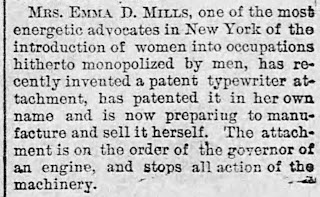 1893
All that is known is that Emma D. Mills was born in Pennsylvania in 1857, that her father came from Connecticut and her mother was English. Was Mills her birth surname, her maiden name, or was it her married name? Are her patents in her single name, perhaps?

1903
From at least 1900 she was a widow. Before that time, US newspapers usually referred to her as "Mrs Emma D. Mills". After 1900 she was more commonly called "Miss Emma D. Mills". In writing one of her two typewriter books (A Typewriter's Conquests, 1897), she called herself "A. Backhander".
I cannot say when Emma D. Mills died. She lived most of her adult life in Brooklyn, and by 1920 was employed as a school teacher. Before that she had run her own publishing company (Manas) and had been a public and bank notary and commissioner of deeds (then extremely rare for a woman) and as such was a regular witness for patent attorneys. But she was perhaps best known as a stenographer, a typing instructor, and for owning her own franchised copying businesses.
Mills' first book, published in 1895, had a title far longer than any known biography of her. It was called The Mills Book of Typewriter Forms, comprising a complete series of legal and business forms of every brand of typewriting work; also, a complete table of abbreviations of American, English, Scotch, and Irish law reports; a complete list of Latin words and phrases; rules for the use of capital letters and punctuation; a list of abbreviations and signs in common use, and printers' proof marks. 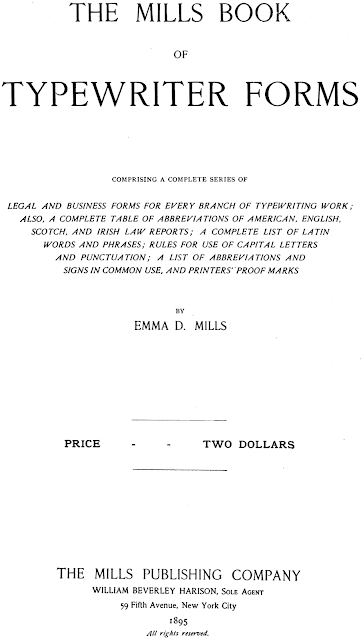 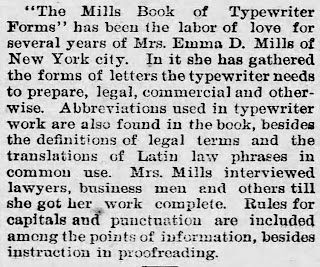 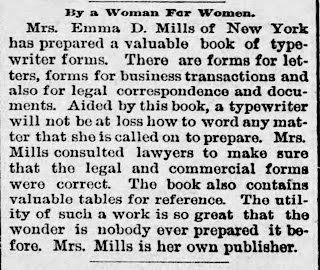 1895
Some things we DO know about this particular Emma D. Mills: 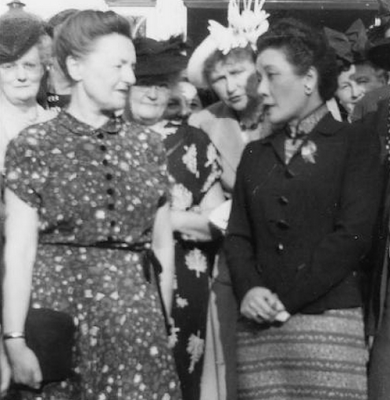 SHE WAS NOT Emma DeLong Mills (1894-1987), the Stamford, Connecticut-born American philanthropist and activist for the Chinese Nationalist cause and a close friend of Madame Chiang Kai-shek (seen with Mills above). This Emma D. Mills did, nonetheless, complete an intensive sub-professional engineering course before working on the Manhattan Project.
SHE WAS NOT the Brooklyn Heights, New York-born socialite and "goodwill ambassador" Miss Emma Mills (1876-1956), the lecturer and critic who was a book and play "expert":

SHE WAS NOT Cairo, Michigan-born Emma Douglas Mills (1877-1956), who married a man called Ruttan.
SHE WAS most certainly NOT, as suggested by Autumn Stanley in Mothers and Daughters of Invention: Notes for a Revised History if Technology (1993), E. Deloss Mills. This E.D. Moss, born in 1845, was a New Jersey boot and shoe dealer and a sometime inventor. He was, in fact, a man, the son of Andrew and Marilla Mills and, long before same-sex marriages were thought of, the husband of a woman called Louise.

But I readily confess I could do no better than Autumn Stanley did 12 or more years ago in tracking down Mills's patents, or anything more substantial about her life for that matter: 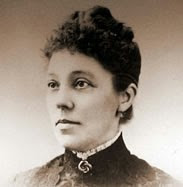 NOR SHOULD SHE be confused with Emma Mills Nutt (above, 1849-1926) the Rockland, Maine-born woman who became the world's first female telephone operator, when on September 1, 1878, she started working for the Edwin Holmes Telephone Dispatch Company in Boston. Wikipedia would have us believe this Emma Mills was born in 1860 and died in 1915, both of which are way off the truth. But she did give us EMMA, a synthesised speech attendant system created by Preferred Voice Inc and Philips Electronics NV. And September 1 is commemorated annually as Emma M. Nutt Day.
Typewriter enthusiasts would definitely commemorate a Emma D. Mills Day, if only we knew a little more about her! Can anyone help me here? 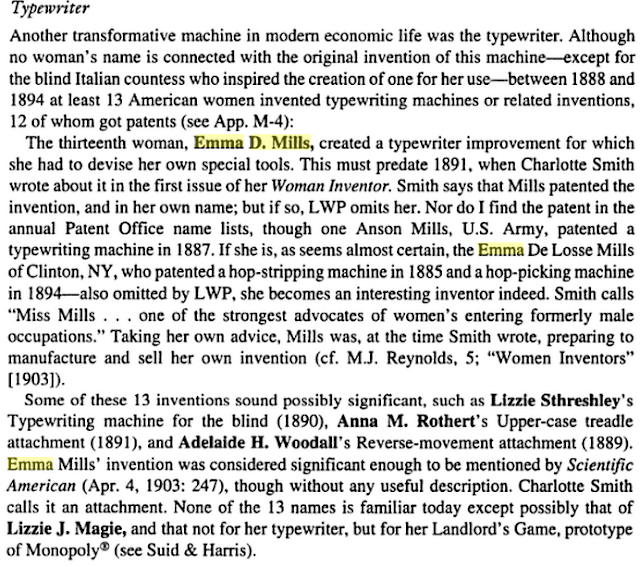 Posted by Robert Messenger at 10:36

It is odd that an inventor worthy of note should have her "special tools" mentioned in such vague terms!!

I wonder why invention and special tools were referred to so often and in such generic terms with no mention of what should be important; the invention.

I agree with the other comments -- the references to the invention are absurdly vague.

But you've done a remarkable job of tracking down the available information on a woman with such a common name.