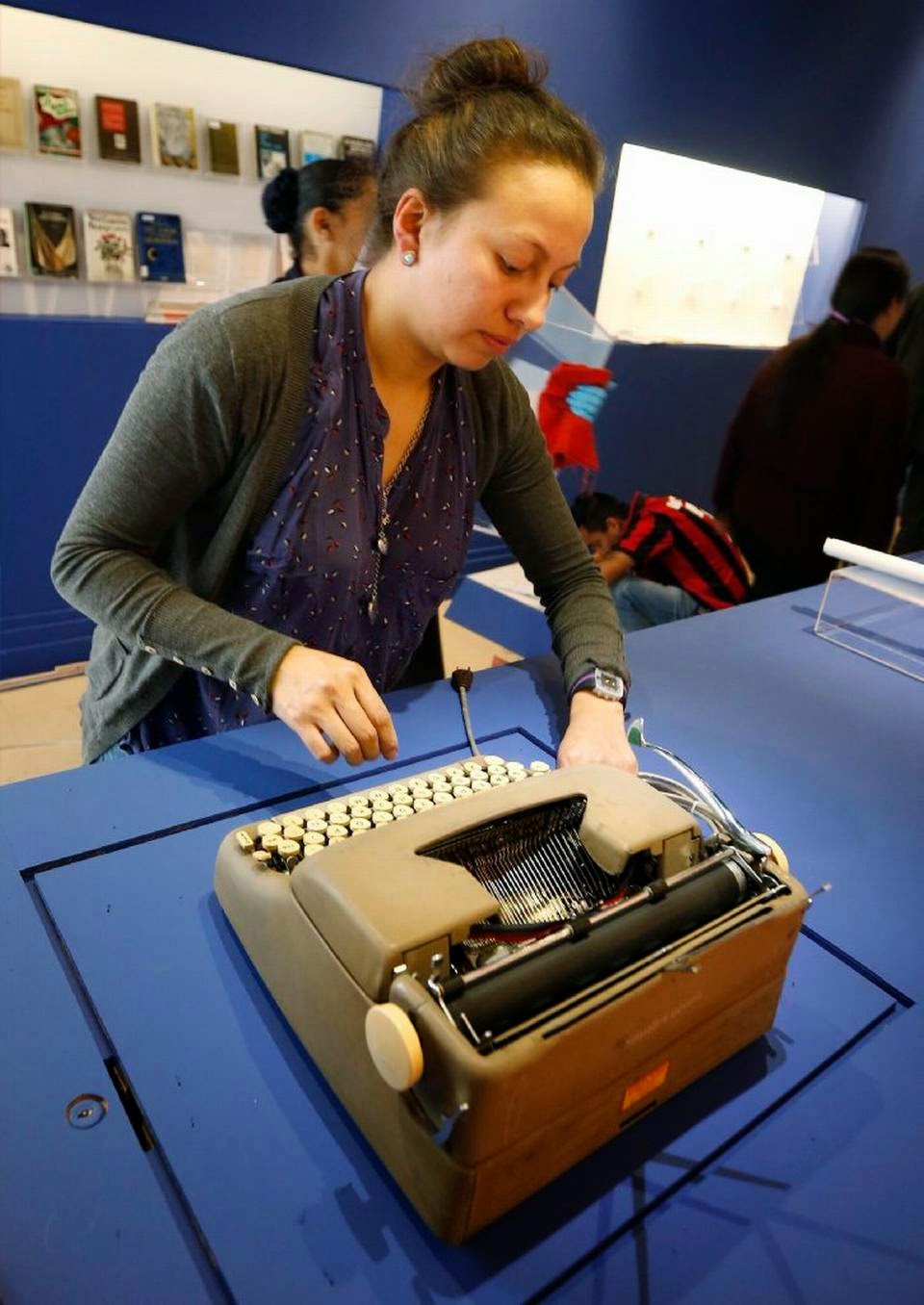 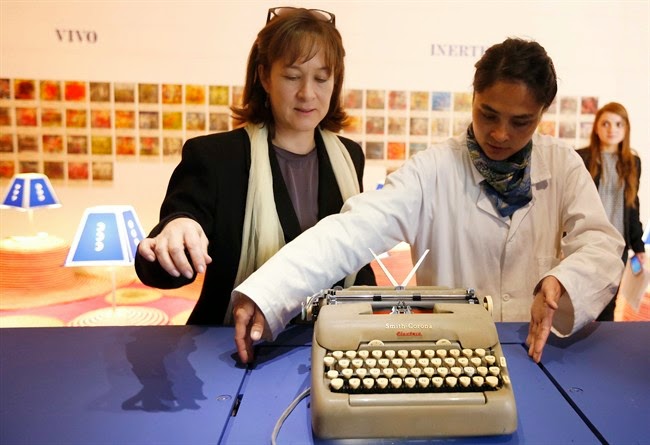 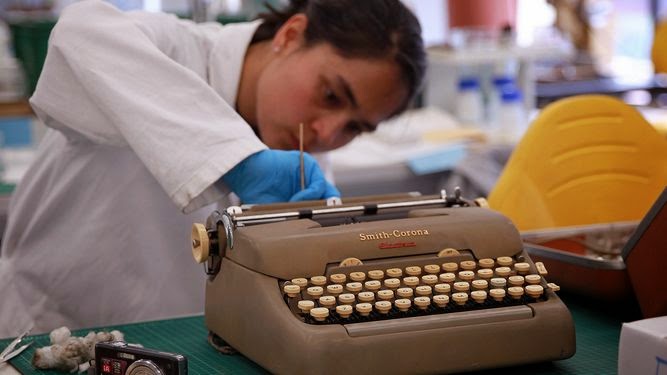 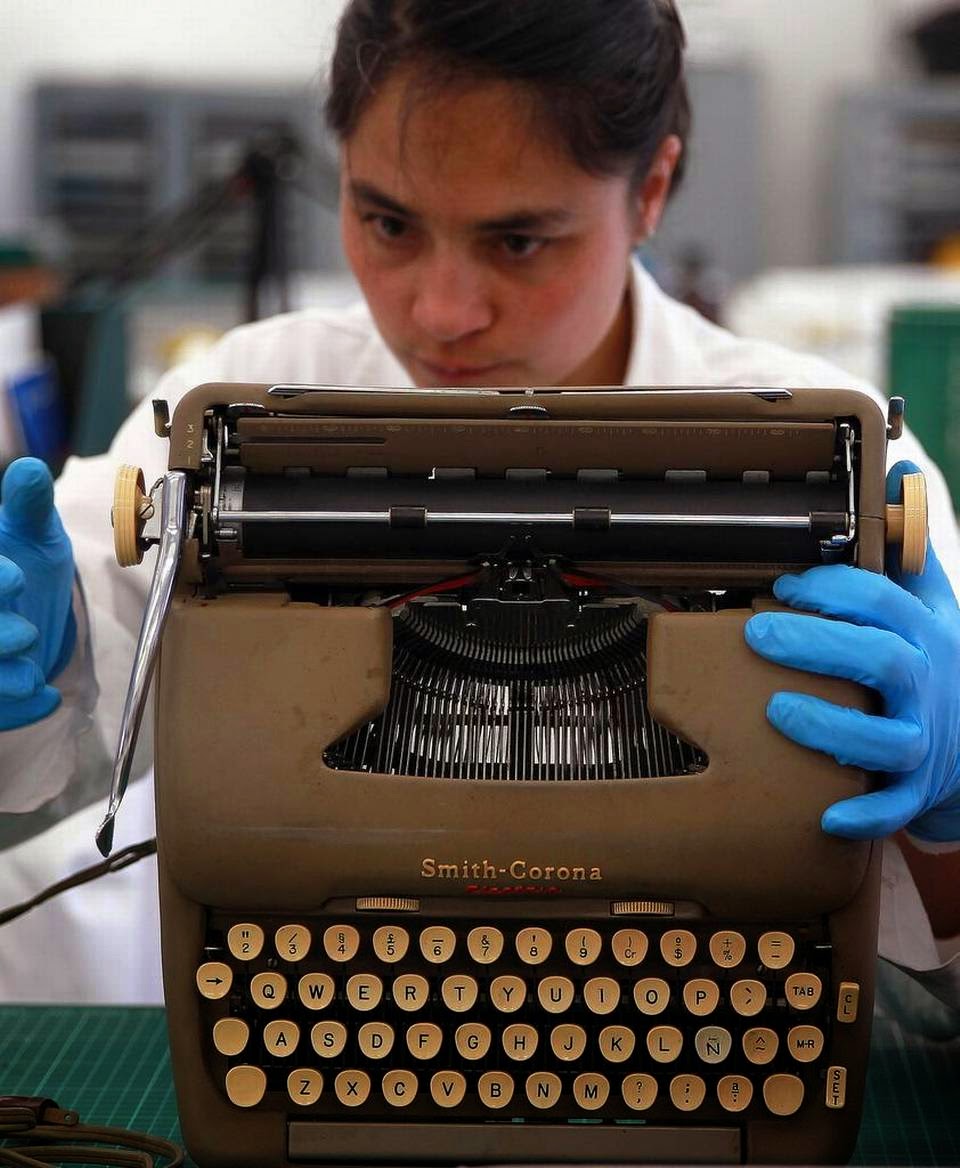 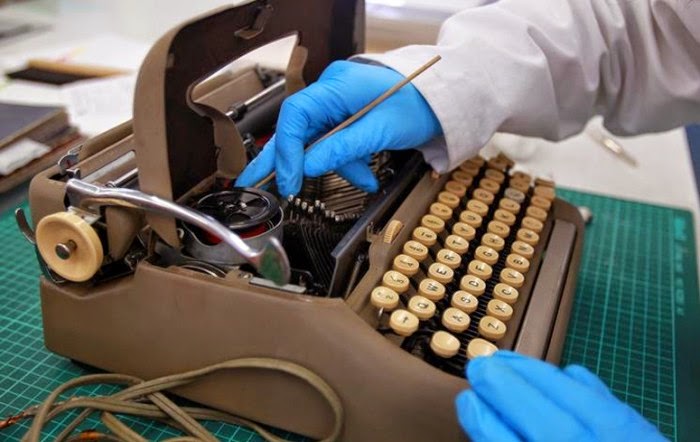 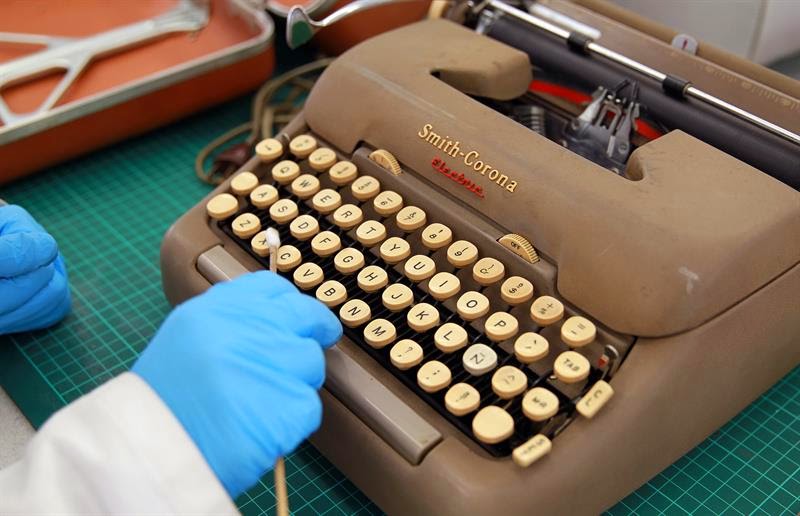 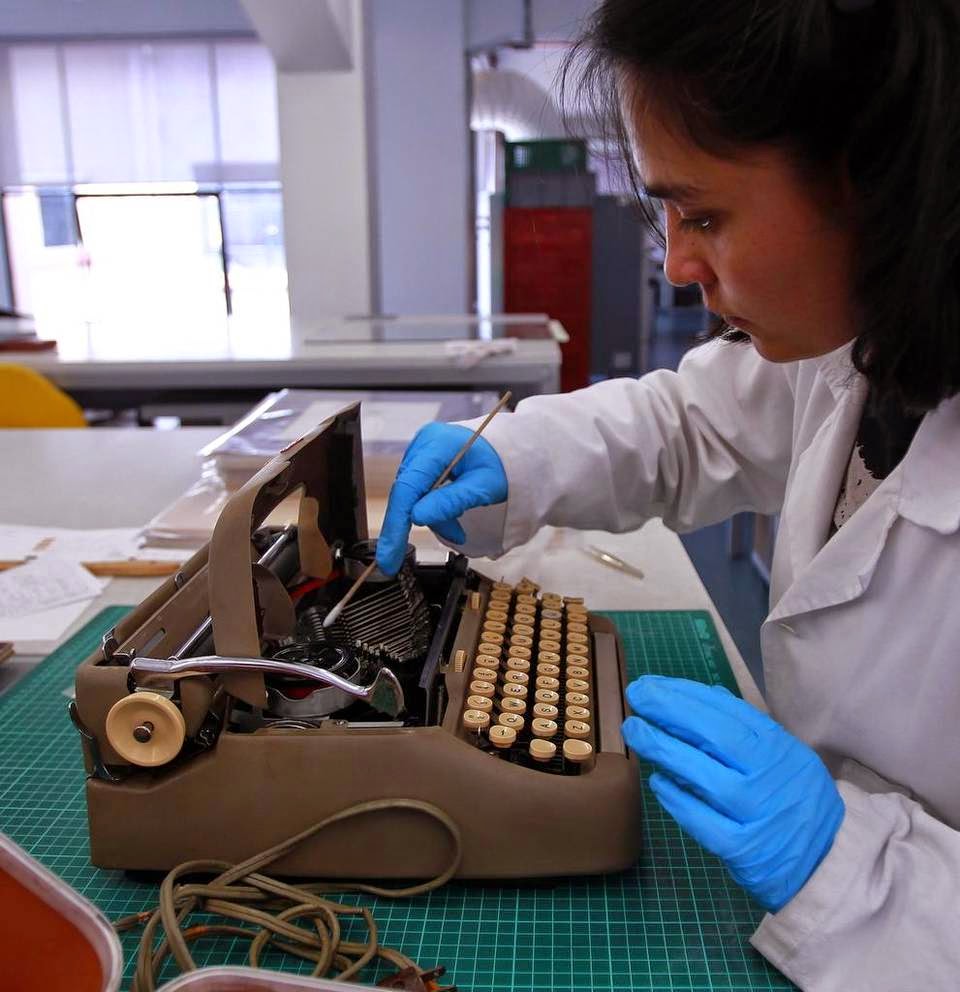 Gabriel García Márquez must be up there with Ernest Hemingway and Tennessee Williams, not just as a writer (though only two of them, including García Márquez, won Nobel Prizes) but for the range of typewriters with which he was photographed. Which is perhaps understandable, given García Márquez once told Paris Review, "I have another problem in that I can only work in surroundings that are familiar and have already been warmed up with my work. I cannot write in hotels or borrowed rooms or on borrowed typewriters." Oddly, however, the García Márquez typewriter now on the exhibition circuit is not one he was photographed using, at least as far as I can find. It's a Smith-Corona 5TE, the world's first electric portable. 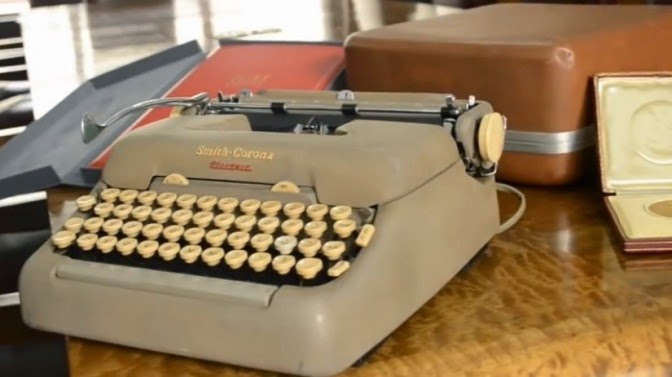 The typewriters García Márquez was photographed using also, presumably, don't include the one given to him by his parents, Gabriel Eligio García and Luisa Santiaga Márquez Iguarán, on his 21st birthday, on March 6, 1948, since García Márquez lost it only a month later. It went missing in the turmoil of El Bogotazo, the massive riots that followed the assassination in Bogotá, Colombia, of Liberal leader and presidential candidate Jorge Eliécer Gaitán on April 9, 1948, during the government of President Mariano Ospina Pérez. The 10-hour riot left much of downtown Bogotá destroyed. García Márquez had pawned his typewriter and it disappeared in the looting that followed. But when Fidel Castro smashed a typewriter on the ground during El Bogotazo, García Márquez swore to Castro that that was his typewriter.
To mark the first anniversary of his death, on April 17, 2014, García Márquez has been celebrated in Mexico City and Bogotá, with hundreds of public readings in Mexico and an exhibition in Colombia displaying the Smith-Corona 5TE, upon which, it is claimed, he wrote Cien Años de Soledad (One Hundred Years of Solitude,) in 1967. The items exhibited came from the University of Texas in Austin, to which García Márquez's family sold his personal archive for $2.2 million. 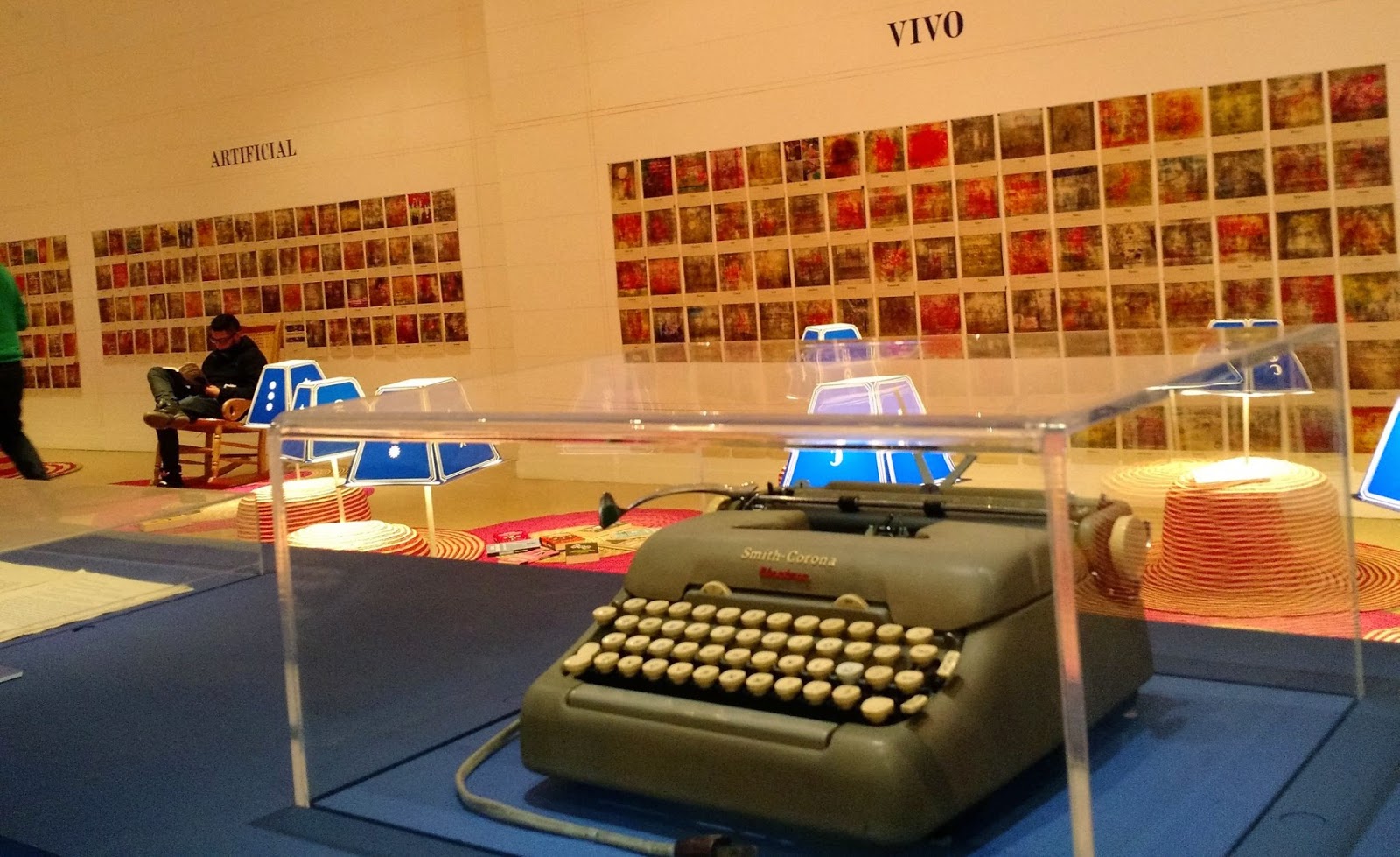 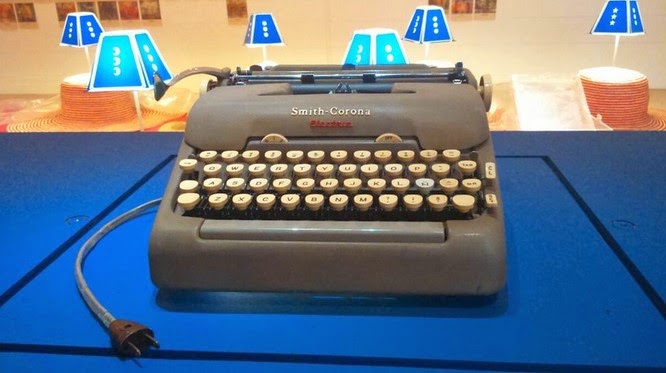 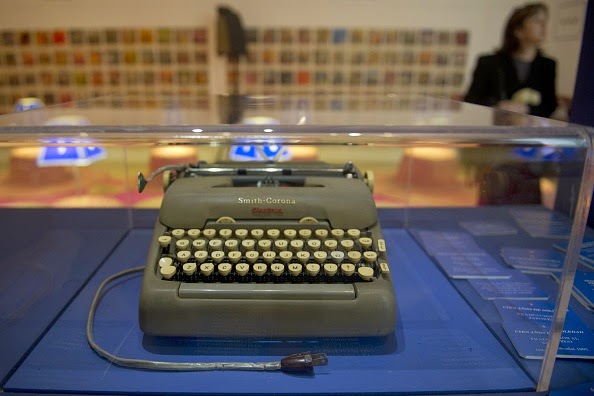 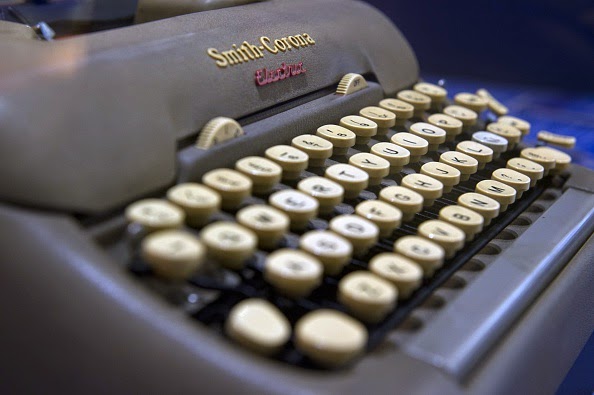 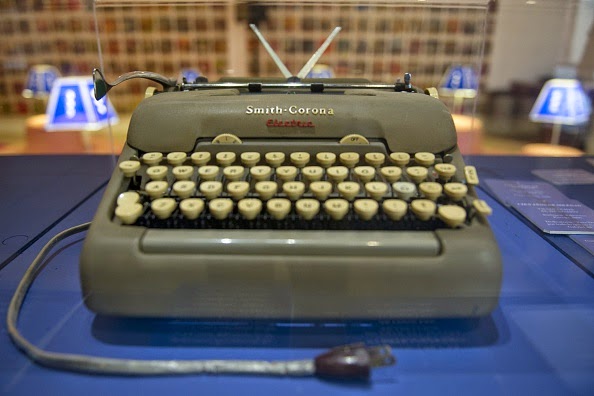 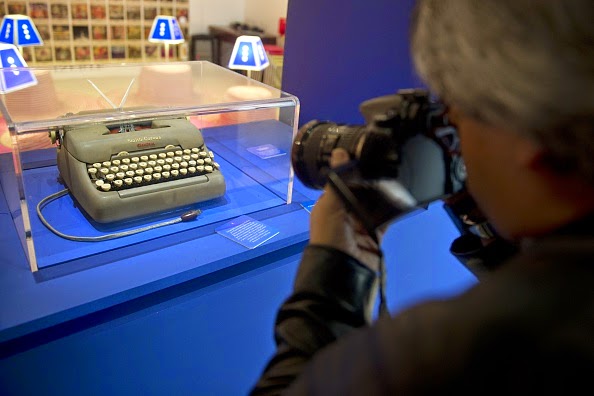 Some of Gabriel García Márquez's other typewriters: 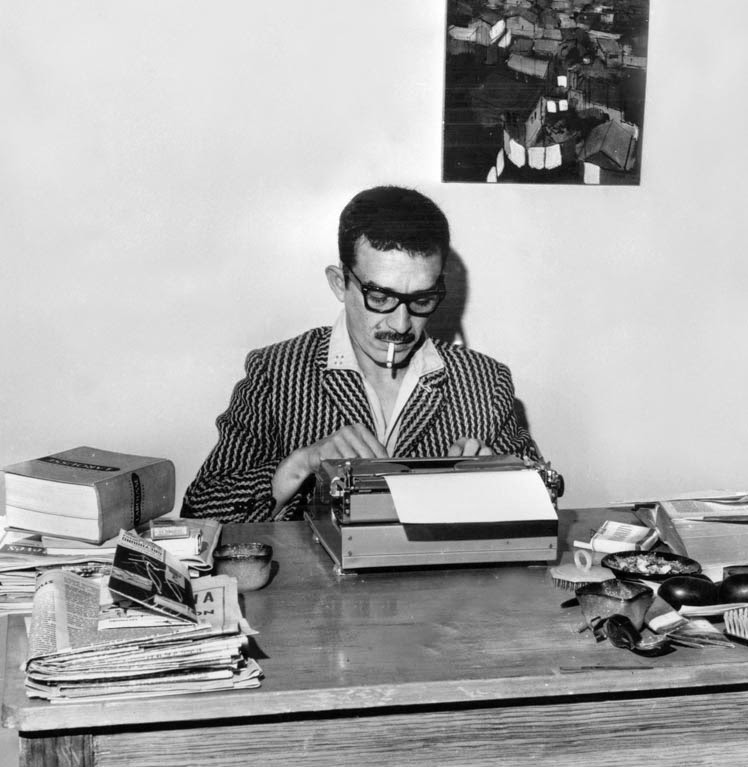 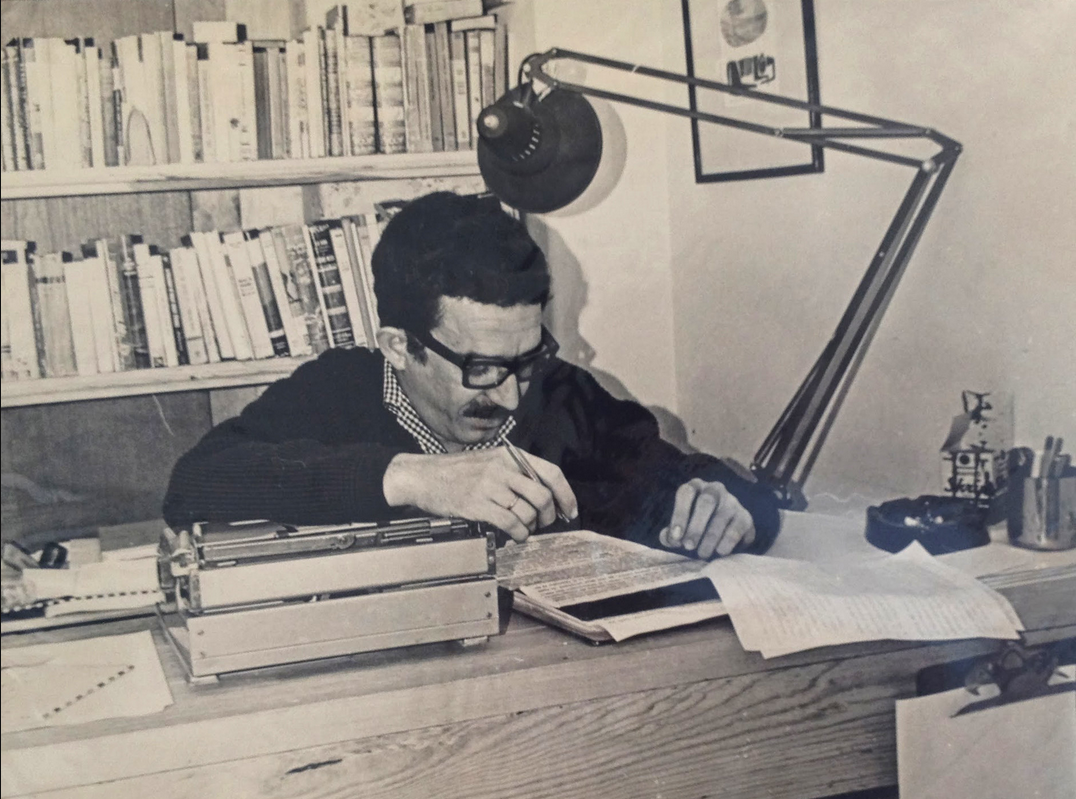 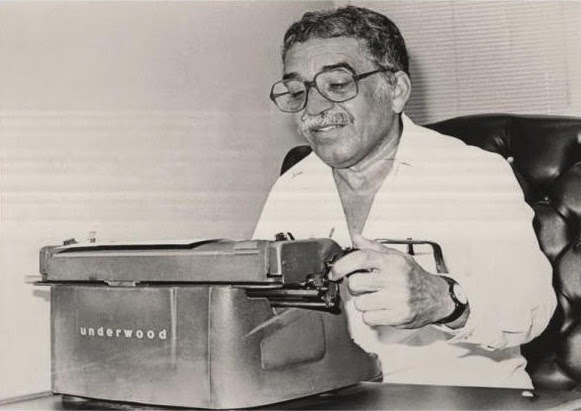 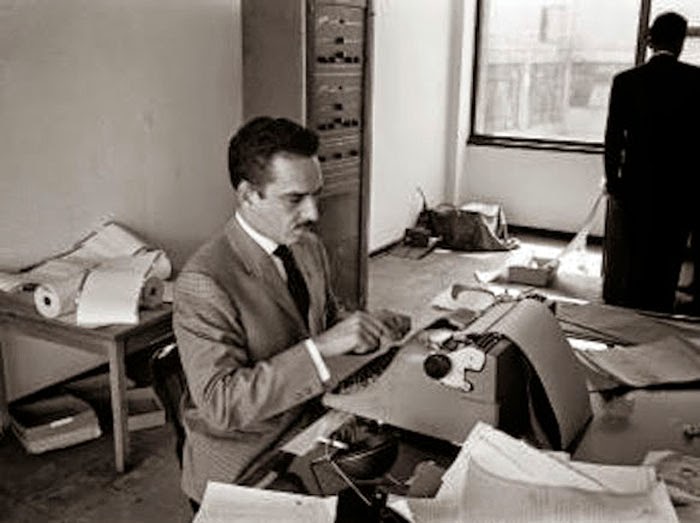 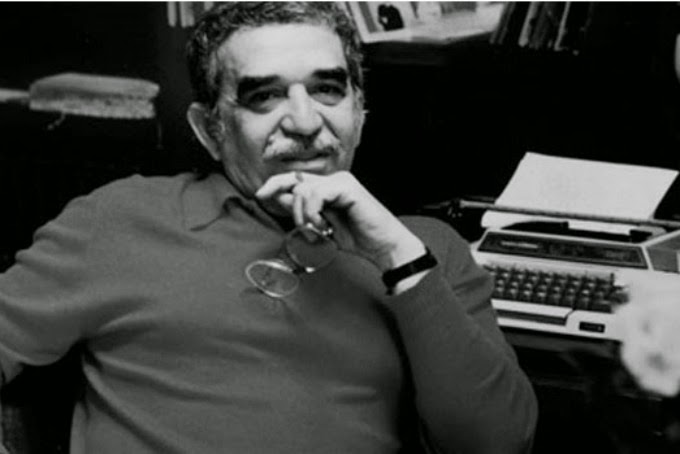 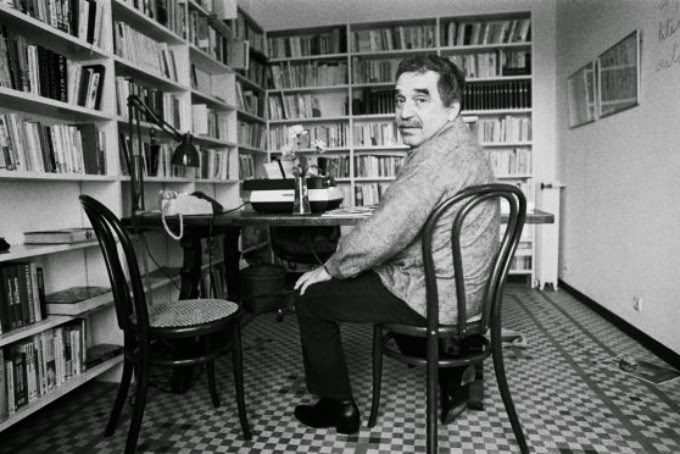 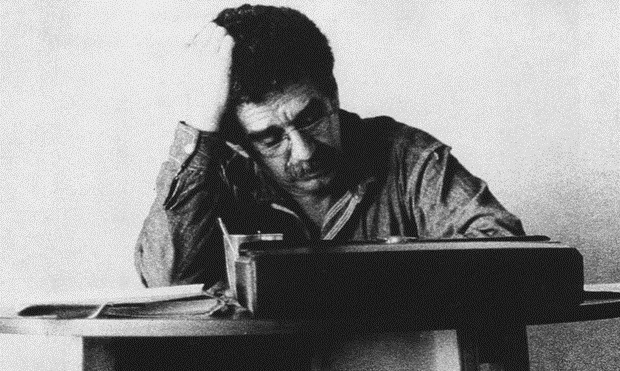 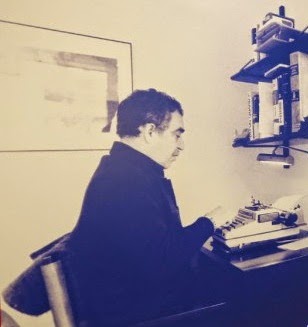 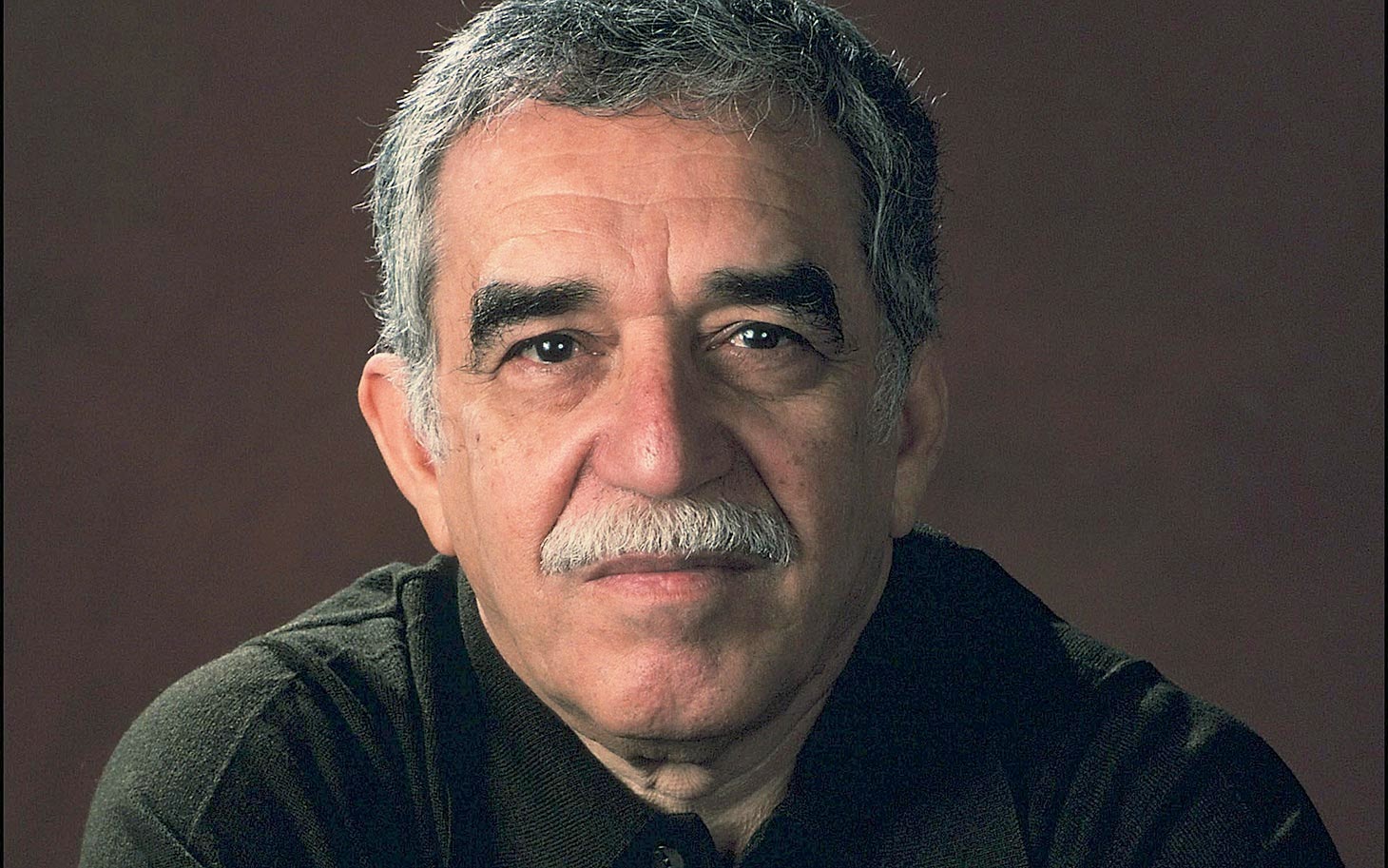 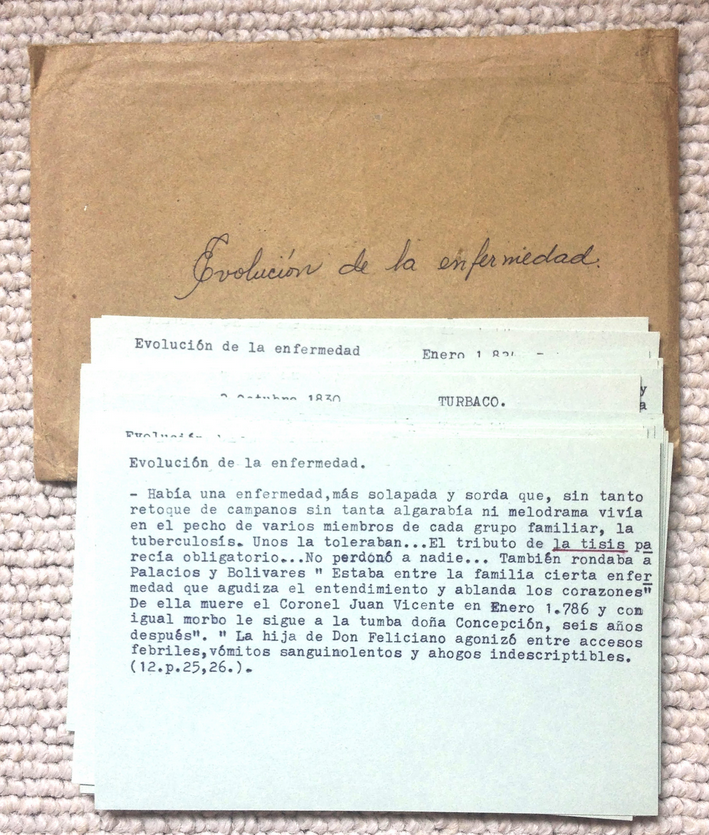 Posted by Robert Messenger at 09:32

Those are some wonderful photos Robert.
Thanks for posting.

Provenance or not, that Smith-Corona 5TE certainly looks the part!

Interesting! And I thought most authors from that generation only had one or two machines in their lifetime.