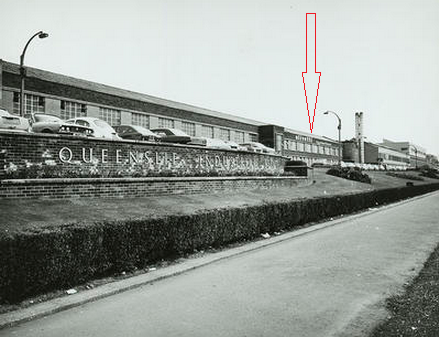 In August 2013 we were given a rare insight into the Remington Rand typewriter factory on the Hillington Industrial Estate in Glasgow, by Scottish-born historian Mary Doland, a Victorian lady whose father Jack O'Brien had been a shop steward at the plant in the 1950s. Now we are able to get an even more extensive tour, of the Olivetti typewriter factory on the Queenslie Industrial Estate in the same Scottish city, again in the 50s and again from a child of a factory manager. "Big" John Brady tests out an Olivetti Lexikon 80 in 1957. Mr Brady, manager of the Olivetti factory in Glasgow in its last years, was the father of our correspondent John J. Brady, who now works for Dell in Britain.
John J.Brady, global account director for Dell in Britain, is the son of "Big" John Brady, who worked at the Olivetti plant from its establishment in 1949 and managed it in its last few years of operation. It was sold to Smith-Corona to make daisywheel typewriters in 1981 (the factory closed in 1983 and was demolished in 1989).
John Jr has become so enthusiastic with his memories of Olivetti's days in Glasgow, revived after he came across a photographic brochure of the Scottish plant, that he has gone out and bought himself a lovely Glasgow-made Lexikon 80, a fine example of the type of machine his dad worked on. A brochure page with a photo of his father is in the platen. 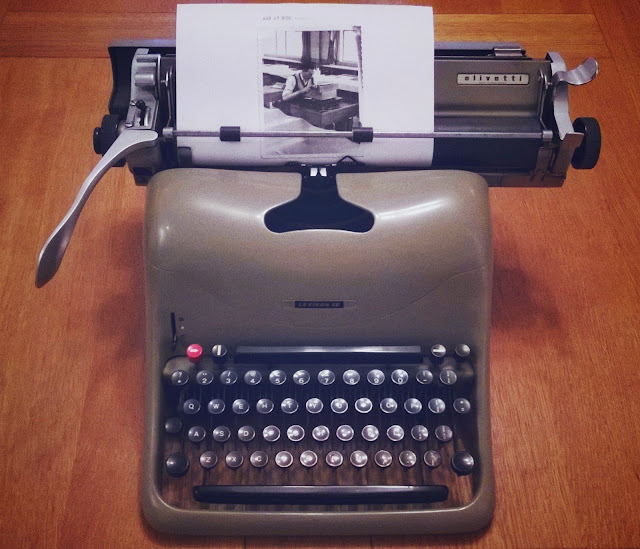 John Jr says that, at its height, the Olivetti factory employed more than 900 people, "most of whom lived within the immediate surrounding area, in the city's East End council estates, one of the poorest parts of Glasgow."
John Jr's post on the Lost Glasgow Facebook pages drew an enormous response from people who had worked at the plant, or had had family members employed by Olivetti. One, for example, was related to Franco Marco, who was sent from Ivrea in Italy to get the factory started.
So here are the pages John Jr sent us: 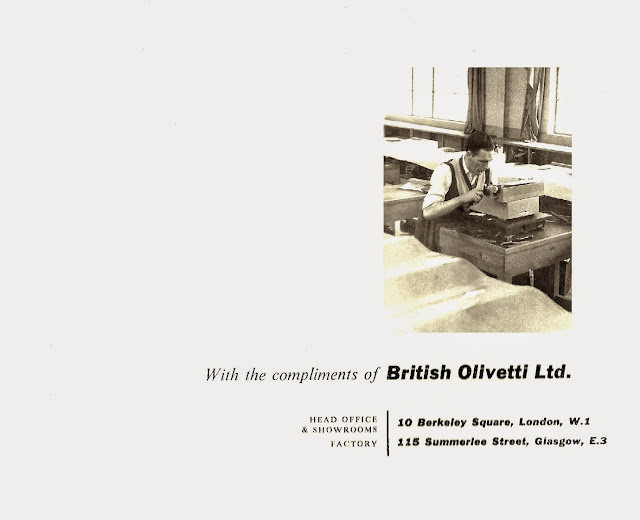 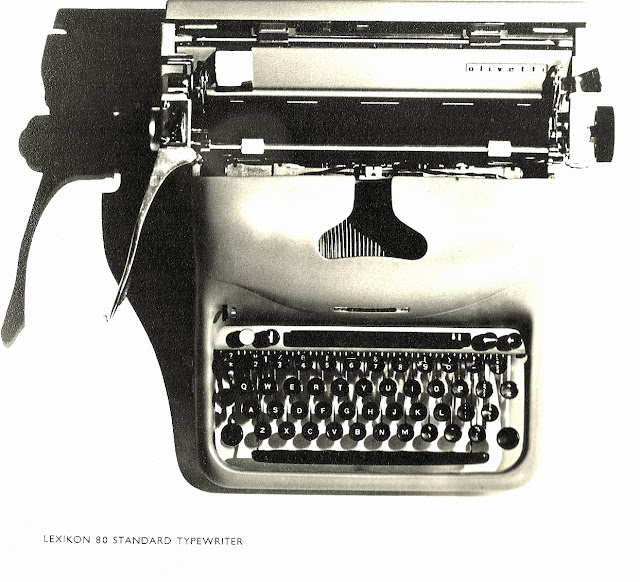 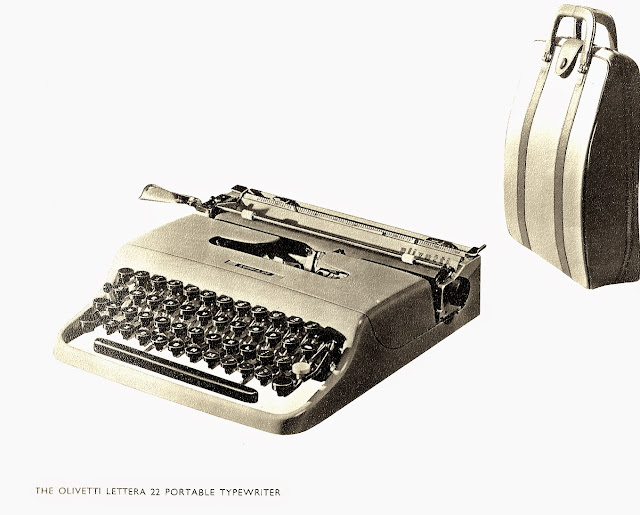 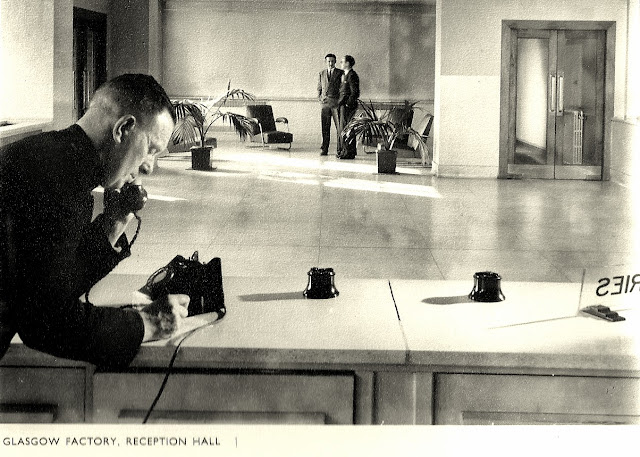 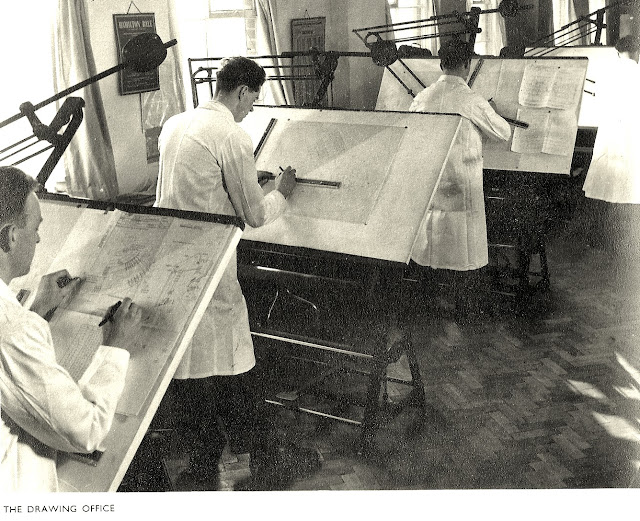 The guy front left is drawing a segment. 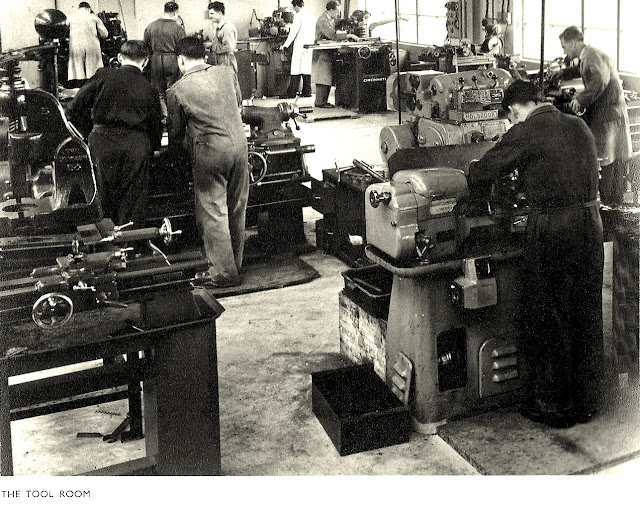 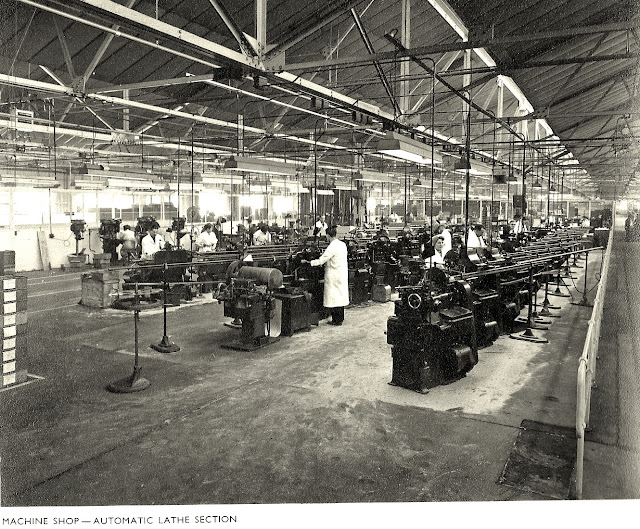 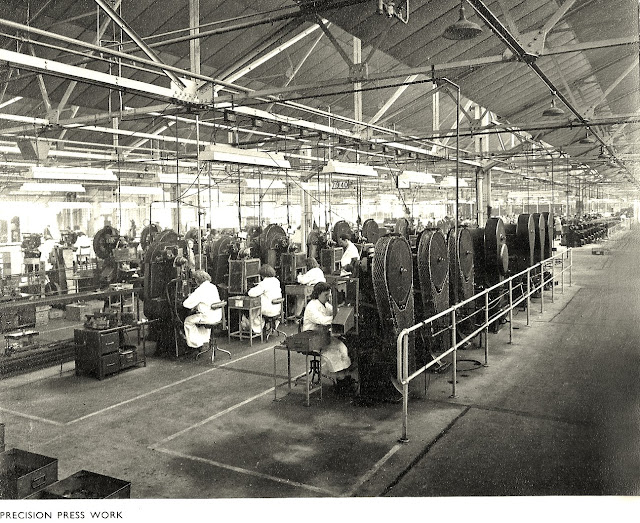 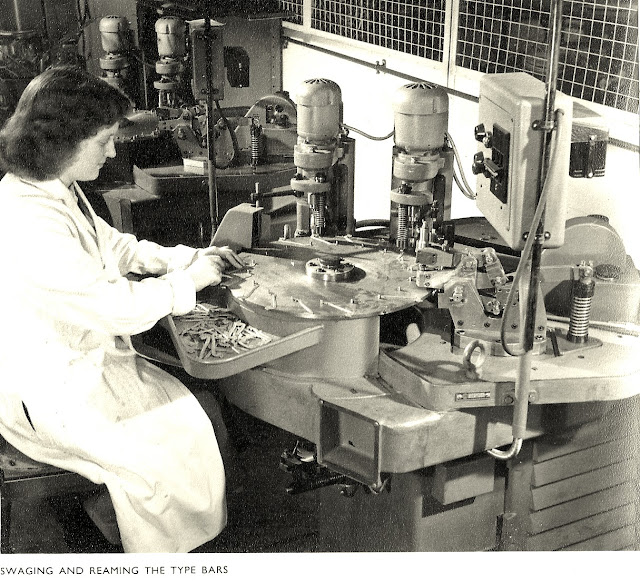 Swaging is a forging process in which the dimensions of an item are altered using dies into which the item is forced. A reamer is a type of rotary cutting tool used in metalworking. Precision reamers are designed to enlarge the size of a previously formed hole by a small amount but with a high degree of accuracy to leave smooth sides. The process of enlarging the hole is called reaming. 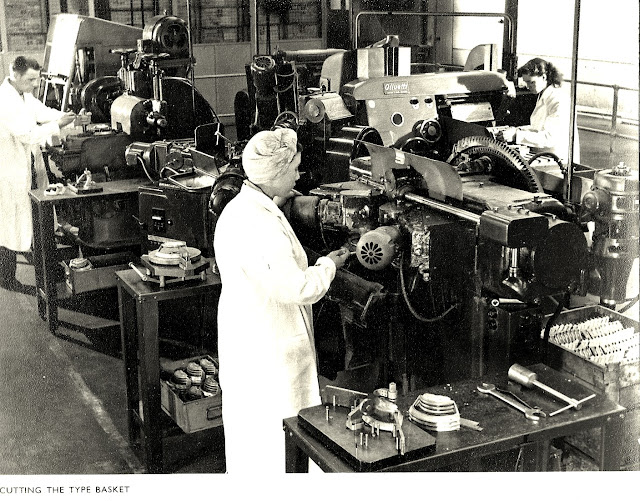 Segments were made in full circles, sliced in half and machine grooved. 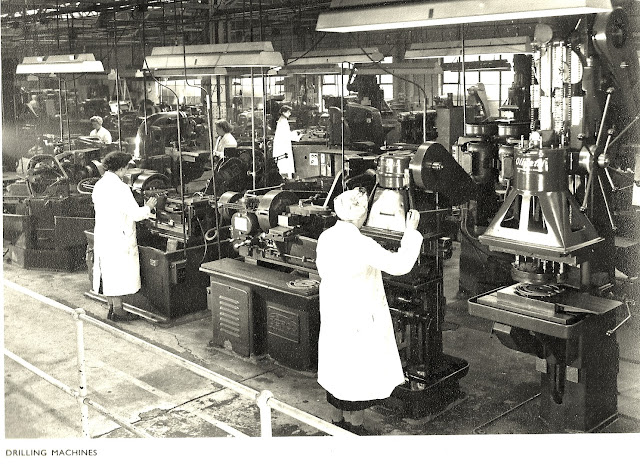 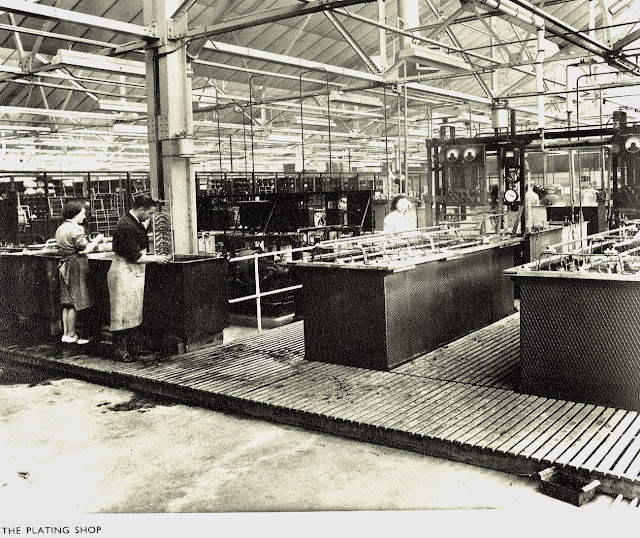 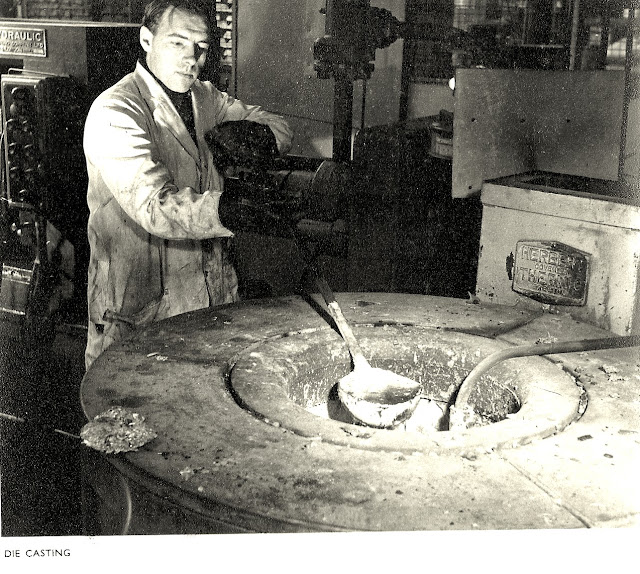 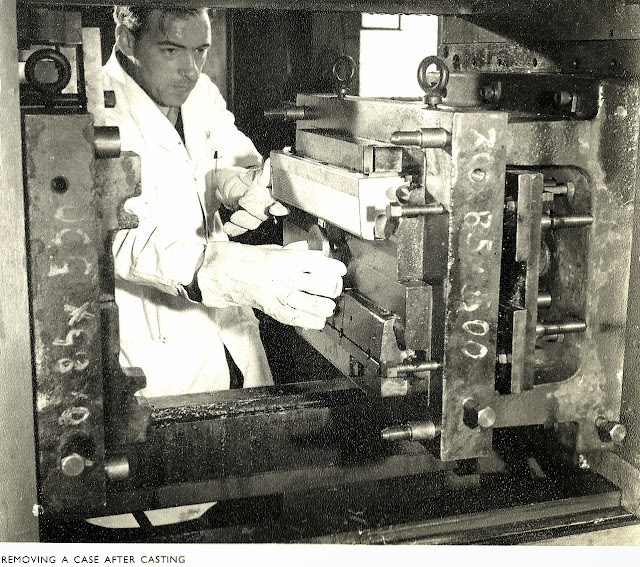 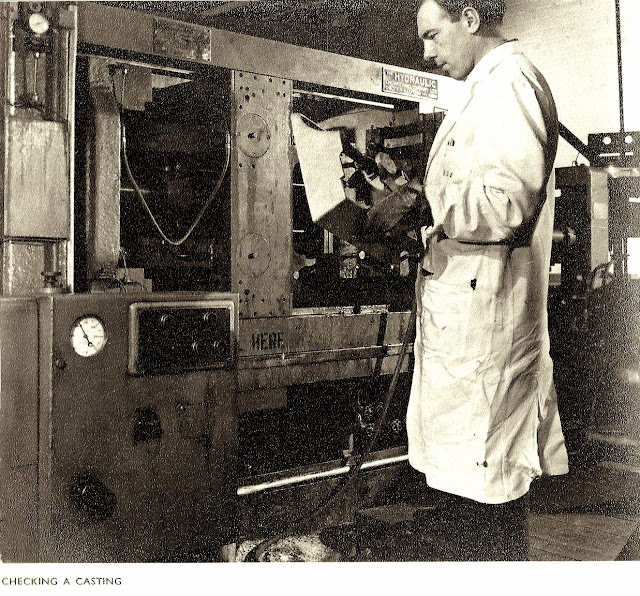 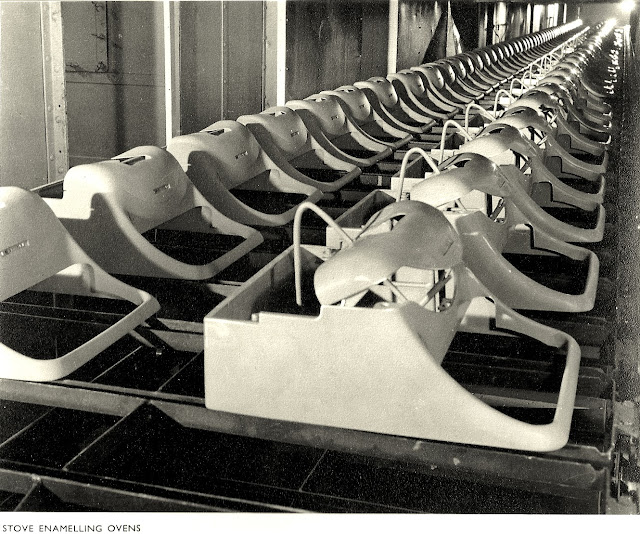 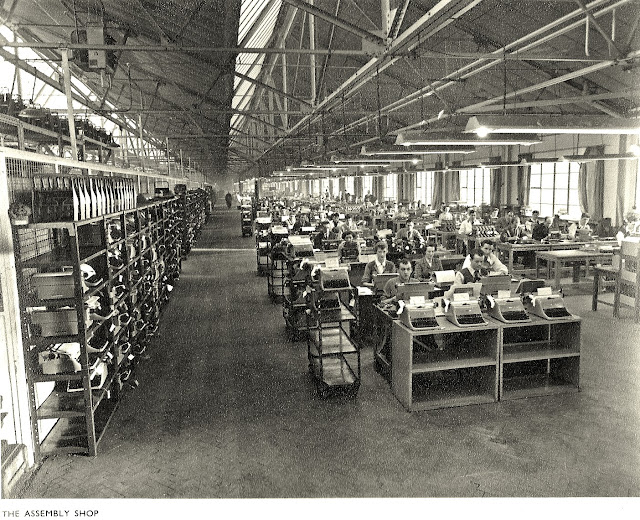 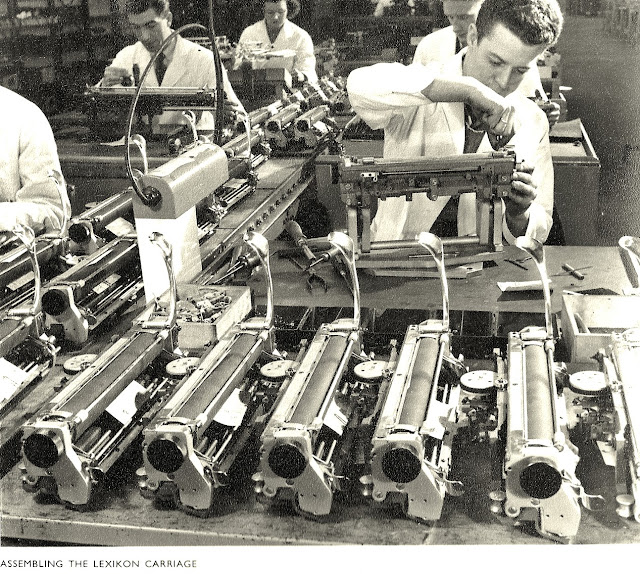 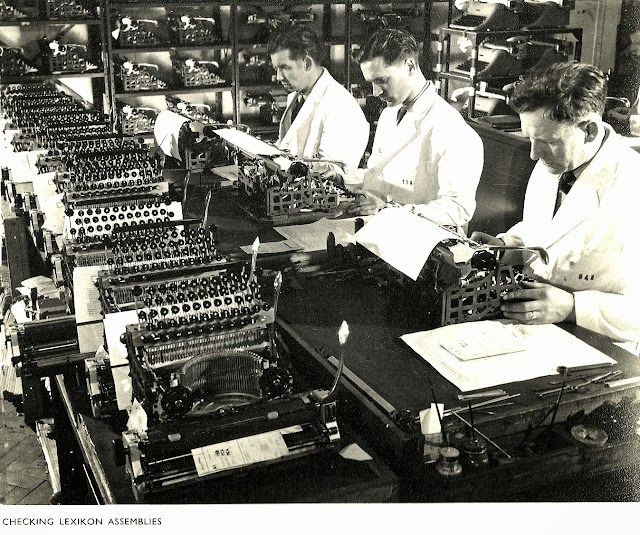 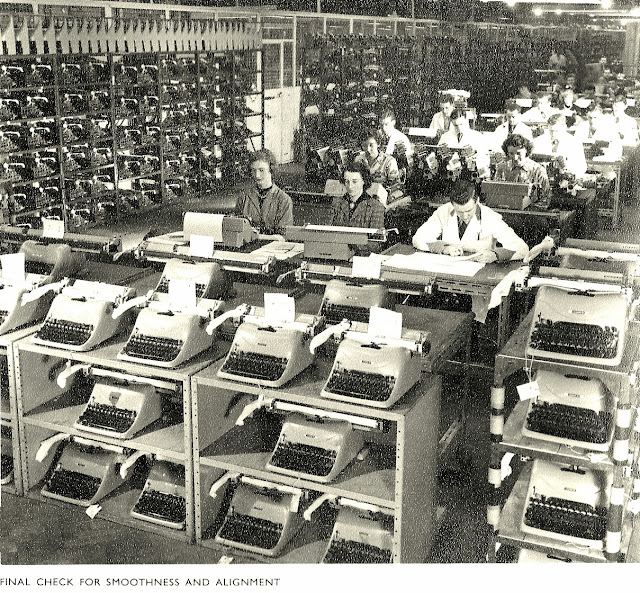 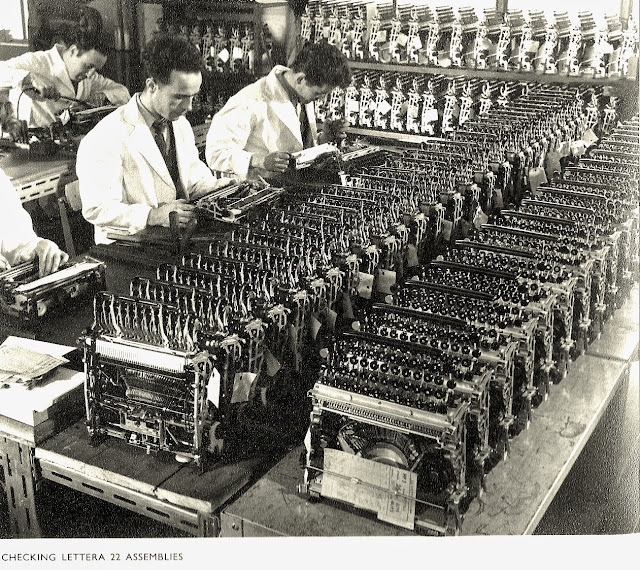 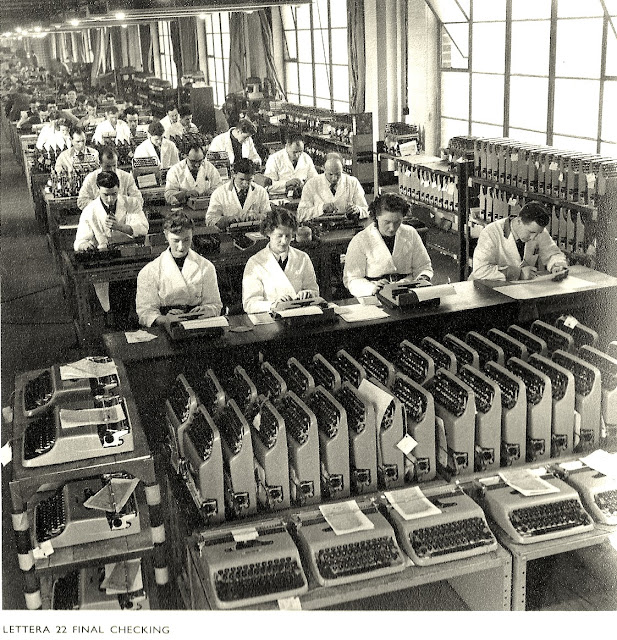 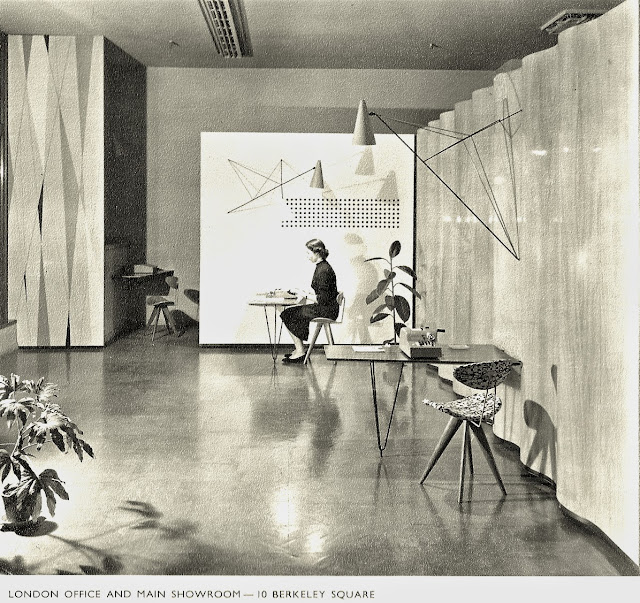 These more familiar photos are not from John Jr's brochure but were taken at the Olivetti Glasgow plant two years earlier, in 1955: 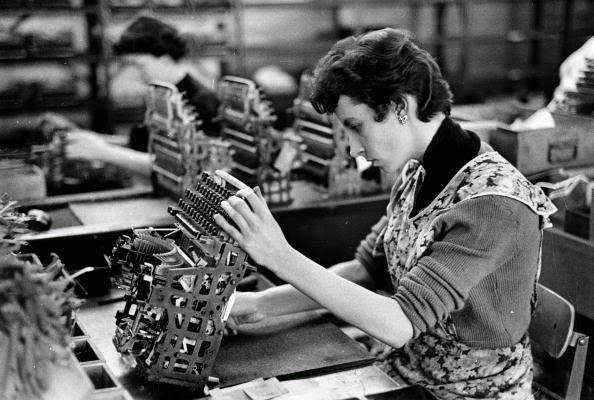 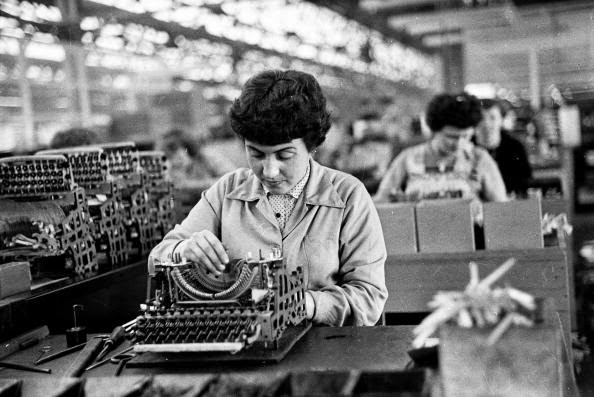 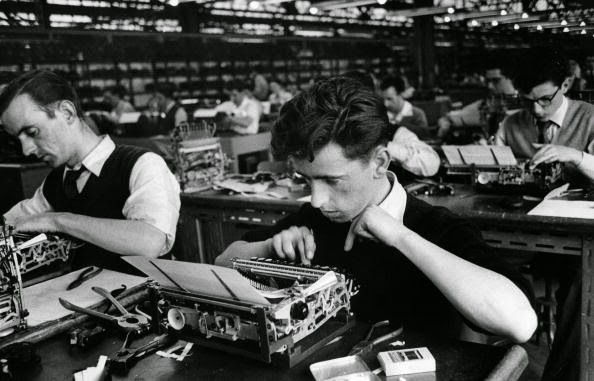 Posted by Robert Messenger at 22:35

Wonderful photos! Thanks for sharing.

I really love seeing inside the old factories, especially when you can see dozens of typewriters lined up in a row. It's just exciting.

Awesome pics. Thanks for sharing Robert!

Those are some fantastic photos. Thanks for posting them. The historical value of this post is beyond measuer.

I hope Ton S finds it.

These are truly wonderful to see - what an insight into the precision and detail that went into the making of a typewriter, something that we sometimes take for granted.
Of course being Olivetti, it's all done with a sense of pride, and style - a total commitment to the visual aesthetic!
Not just the machines are fine, but the factory as well.

Just brilliant! That's where my Lettera 22 was born!

Great to have this information. The Leterra 22 I used was from that production line. Despite being backpacked round the world, used in deserts and fields and having things spilt all over it, it still works like an absolute weapon. Great manufacturing.

Thank you for sharing this! I found this as I was researching today - I just bought a lettera 22 that was made in the Glasgow factory! As I live just in Edinburgh it has been lovely to find an old quality typewriter made in Scotland.

This brings back some very good memories>
I was with Olivetti Glasgow office sales 1960-62 then moved to the Edinburgh sales office.
The manager in Glasgow was Mr. Philip McVeigh who moved to London I believe as National Sales Manager.
I also visited the plant in Glasgow, a great plant.
I'm David Bulley an 84 year old now living in Canada.