One Afternoon in Ann Arbor 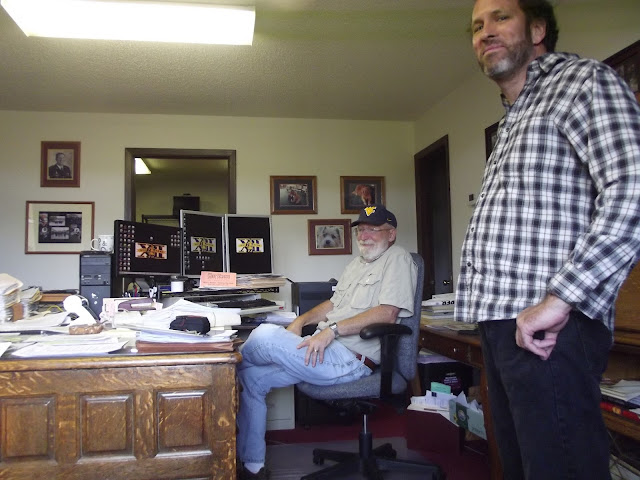 I was in Herman Price's office on Greenbag Road, Morgantown, West Virginia, when I got talking to another renowned typewriter collector, Mike Campbell (above, right, with Herman at his desk). Mike told me he came from Ann Arbor, Michigan, and I immediately remarked that that was where Jesse Owens had broken five world records and equalled another world record within 45 minutes on one afternoon, on May 25, 1935. I'm not sure if Mike knew that, but Richard Polt, who was within earshot, seemed surprised I could recite such details off the top of my head. Yet Jesse Owens' efforts in Ann Arbor were so astonishing that, once absorbed by a young track nut in 1959, they would remain forever deeply etched on his mind.
What Owens did in May 1935 was, put quite simply, the greatest single athletic achievement in the entire history of sports. 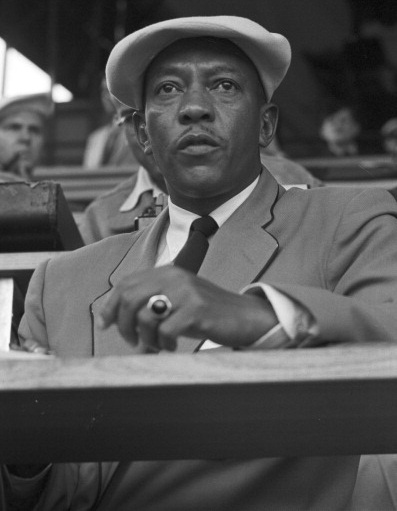 Jesse Owens surrounded by Olivetti portable typewriters in the Press Tribune of the Melbourne Cricket Ground during the 1956 Olympic Games - 20 years after he had won four gold medals at the Berlin Olympics.
The 80th anniversary of Owens' world record spree at the 1935 Big Ten Western Conference track and field meeting at Ferry Field, Ann Arbor, passed this week with barely a mention in the mainstream media. What media did mention the milestone got it wrong - Owens set five new world records that day, not three. Most also failed to factor in that the night before the meeting, Owens had fallen down a flight of stairs at the hotel at which his Ohio State University team was staying, and so severely injured his tailbone he couldn't bend to touch his toes. He had already been suffering from back pain for three weeks previously, and told Ohio coach Larry Snyder he might have to pull out of the Ann Arbor events. The sports world has been thanking its lucky stars ever since that he did compete.

The reason the mistake is made about the number of world records Owens set that day is because many Americans fail to understand that in setting new marks for the 220 yards and the 220 yards hurdles, under existing International Amateur Athletics Federation rules Owens also set world records for the 200 metres in both events. Two hundred metres is 218.72266 yards, therefore Owens' times over the slightly longer 220 yards were also recognised as 200 metres records. 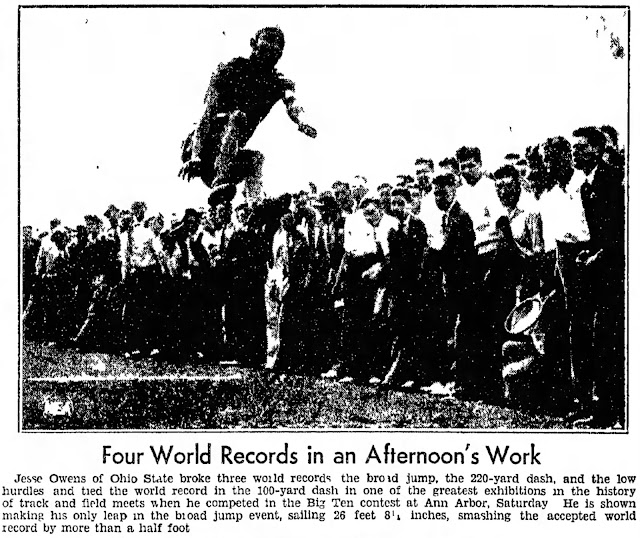 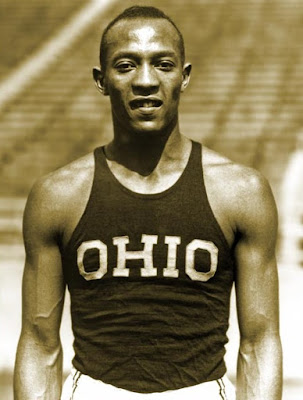 In none of the tributes paid to Owens is it mentioned that in the 100 yards at Ann Arbor, all three stopwatches actually showed 9.3 seconds, which, if accepted by trackside officials, would have given Owens a sixth outright world record for the afternoon. However, the timekeepers said the clocks had stopped at just over 9.3 seconds, so Owens' time was rounded out to 9.4, rather than the 9.3 he ran. Thus he was officially credited with equalling the world record, which was first set by the "Glendale Greyhound", Frank Wykoff, in Los Angeles in 1932. With Owens denied the first 9.3 clocking, it was not for another 13 years, until 1948, that Mel Patton officially ran the first 9.3, in Fresno, California. And it wasn't until 1961 that someone - New Jersey's Frank Budd - ran 9.2, in New York.
At Ann Arbor on May 25, 1935, this was Owens' schedule: 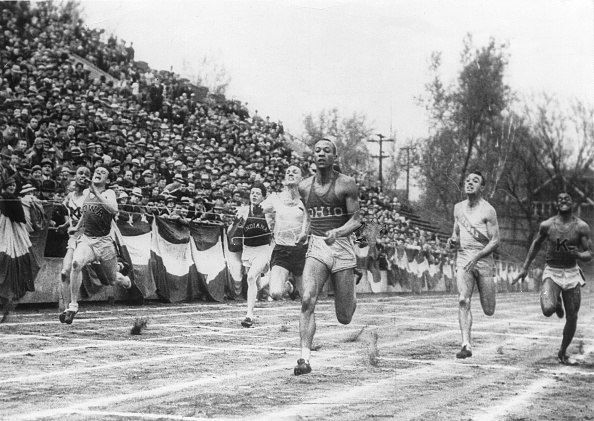 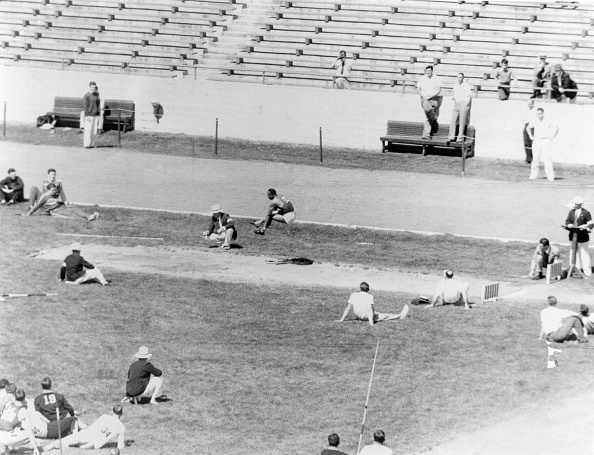 3:25: In his first and only jump of the day, he won the long jump from Willis Ward by a massive 19 inches, and added more than six inches to Chuhei Nambu's four-year-old world record. 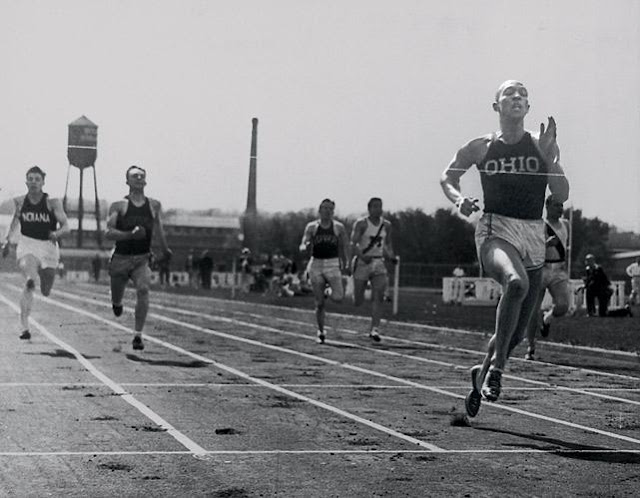 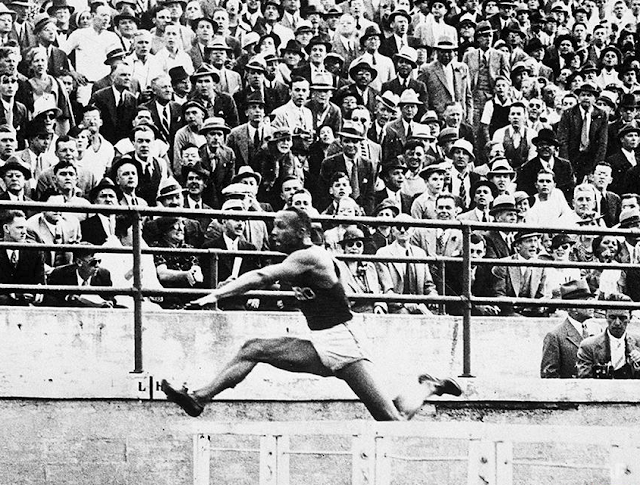 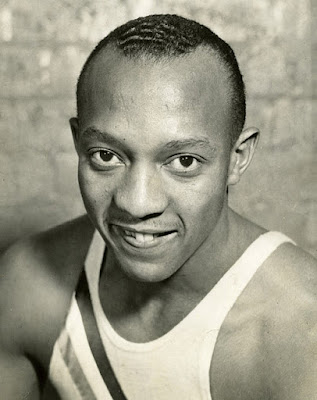 James Cleveland "Jesse" Owens was born in Danville, Alabama, on September 12, 1913, and grew up in Cleveland, Ohio. He stood 5ft 10in tall and in his track days weighed 156lbs. 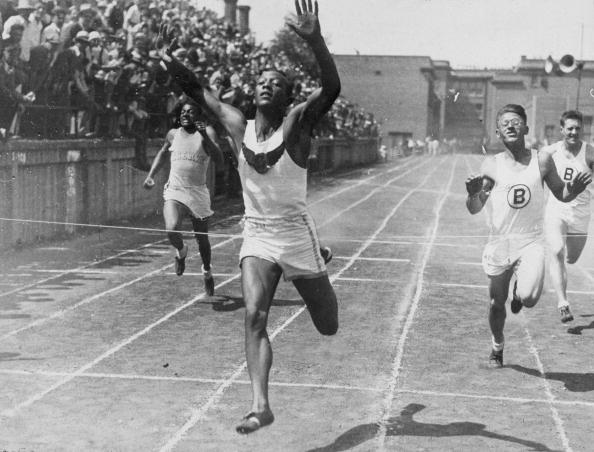 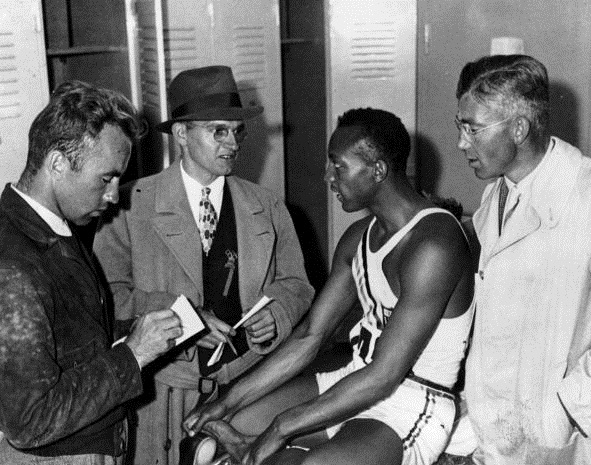 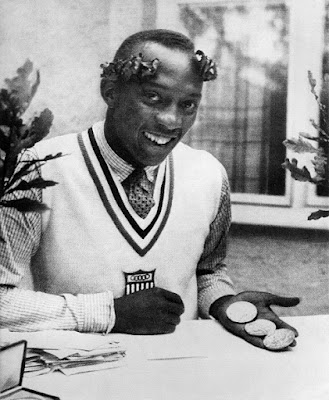 Even this sportless egghead has to admit he's impressed!

Ah, Jesse. He sure put Hitler to shame that day.

Great recap of the day and an important reminder of his tremendous talent. The fact they don't run the 220 yd./200m low hurdles anymore shouldn't detract from what he did then.

Speaking of which, the standing broad jump is no longer contested, but it's a standard measure used by NFL teams to evaluate talent. A couple of months ago or so a guy from the University of Connecticut, at an NFL draft combine event, jumped 12 ' 3", which is believed to be a world record. It's on YouTube. Stunning to contemplate. I wonder what Jesse could have done?