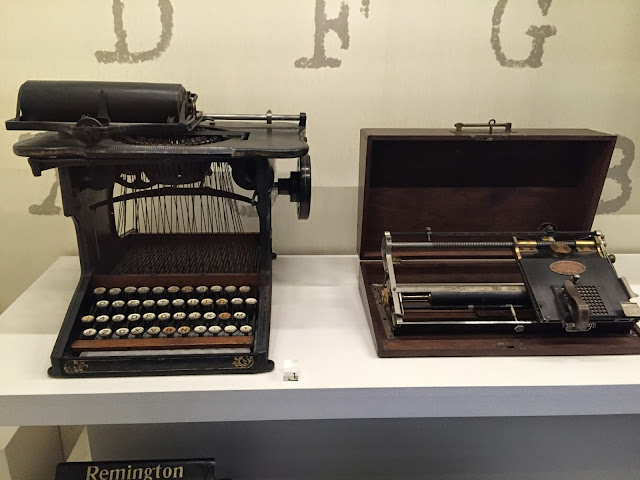 Who seeks out typewriters on their honeymoon? My darling ad dutiful son Danny and his lovely wife Emily, that's who. With friends and family coming from England and the US and many parts in between for their memorable wedding on November 1, Danny and Emily didn't get the chance for a honeymoon back then. Wedding guests who had traveled such vast distances to be here stayed on for a few days and Emily and Danny wanted to spend some time with them. But with their baby due in a little more than three months' time, they have now been able to avail of the opportunity to escape Canberra's chilly climes and head south to a somewhat sunnier Melbourne.
The first typewriter they came across down there didn't bode well for future finds: 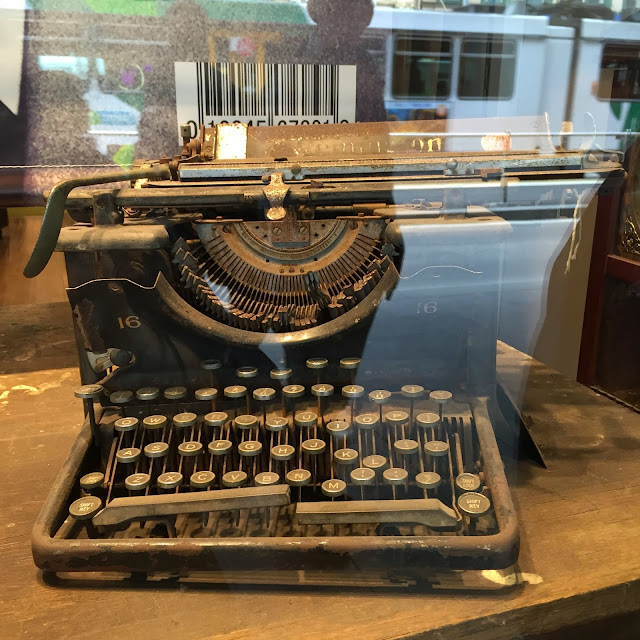 But things improved considerably when they went to Museum Victoria's Melbourne Museum The Melbourne Story: Spinning a Yarn exhibition in Carlton yesterday. They immediately identified the pick of the crop, an 1875 Sholes & Glidden (serial number 1202) with a striking gold, red-white-and-turquoise crest on each side. : 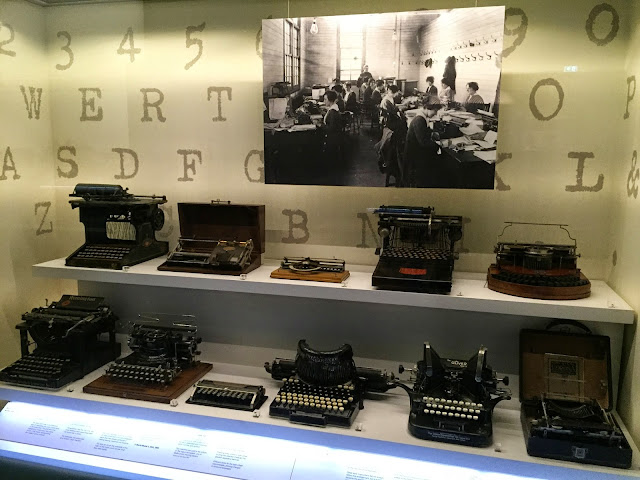 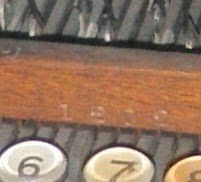 It hasn't all been typewriters on their travels, however. They also visited the aquarium, where Danny got closely acquainted with a penguin: 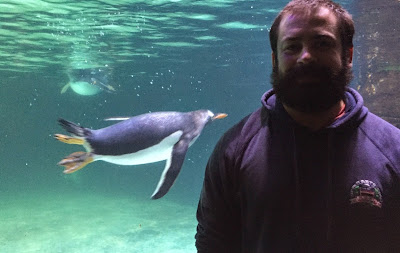 Meanwhile, back in Canberra, I have been taking good care of their charming kitten Magnus: 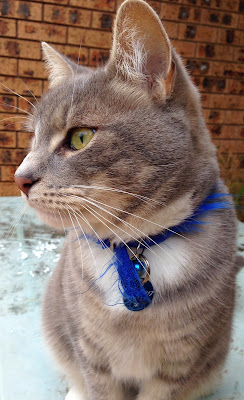 But back to typewriters ... 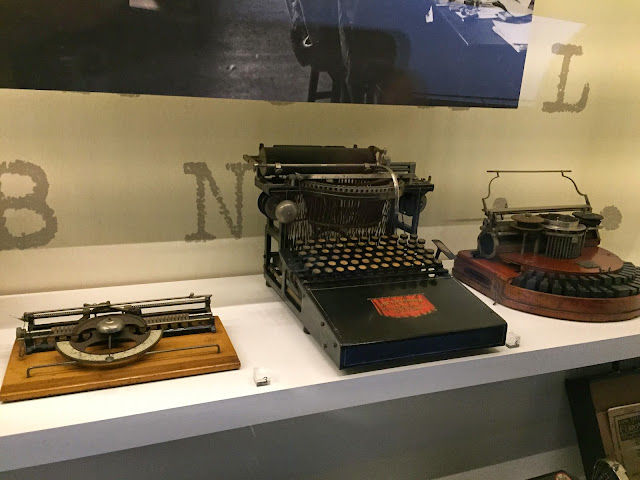 This Caligraph, by the way, was donated to the museum by The Argus newspaper, where it was used in the 1880s.
It's a shame these beautiful typewriters remain permanently in Victoria, as I feel their historical value is wasted on Melburnians, so avowedly disinterested in typewriter history. I first saw Museum Victoria’s magnificent typewriter collection at Scienceworks in Spotswood during the 2011 I Am Typewriter Festival, and revisited it with Danny in late October 2012, when the museum gave me a Salem Hall and some other valuable old typewriters. (The museum kept at least one Hall, obviously, as it can be seen in the image at the top of this post.) 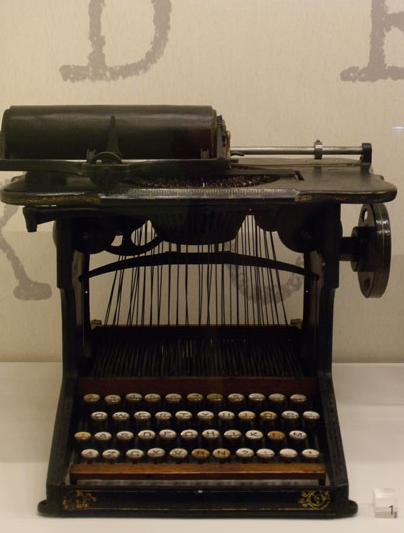 Scienceworks' Sholes & Glidden was sold to the Victorian museum on July 14, 1923, by Mary Jane Belton (1871-1941), of South Yarra. I believe she asked and got a figure in excess of £400 for it, which would have been a vast amount for the state government to spend on just one item back then.
At the time I first saw it, more than four years ago, those were the only details I had about the museum's acquisition of this typewriter. Since then, however, its provenance has become apparent. I had assumed, in a sexist sort of way, that Mrs Belton had inherited the typewriter after the death of her husband, the colourful Melbourne character Samuel Philpotts Belton (1861-1928), an English-born hotel broker. But of course Sam Belton had been declared bankrupt in 1894 with 10 shillings in assets – so it wasn't him who owned a typewriter which was, even back then, so valuable. 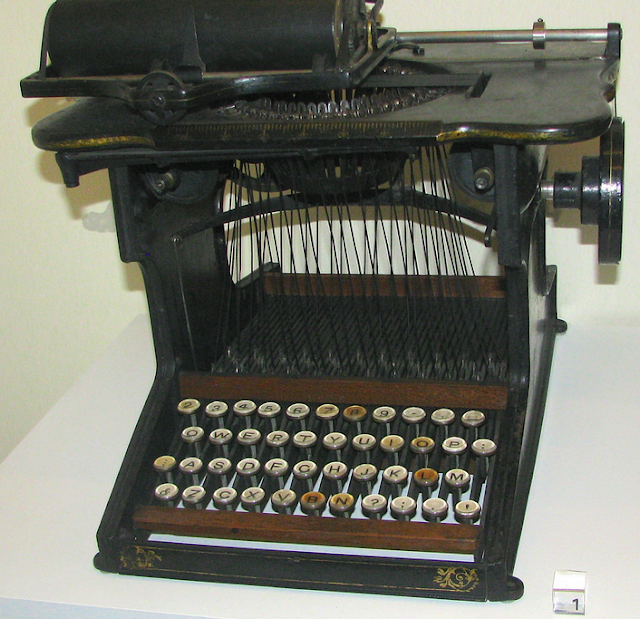 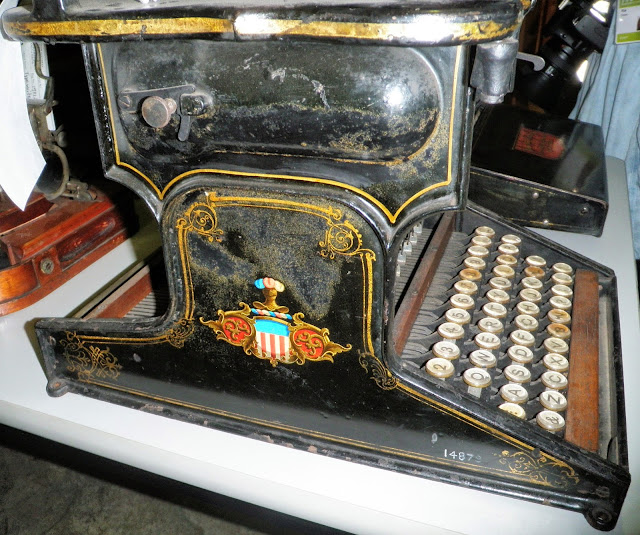 It turns out Mrs Belton actually inherited the Sholes & Glidden from her late father, Thomas Bookless (1834-1910), a Scottish-born Gippsland-based horse importer and breeder who arrived in Australia in 1862. 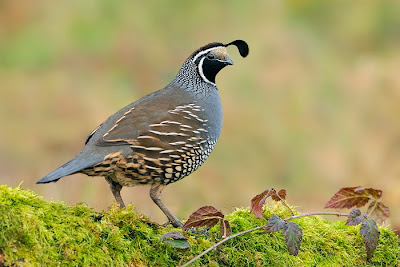 Bookless went to California on business in the late 1870s and brought back with him horses, Californian quails and this Sholes & Glidden. 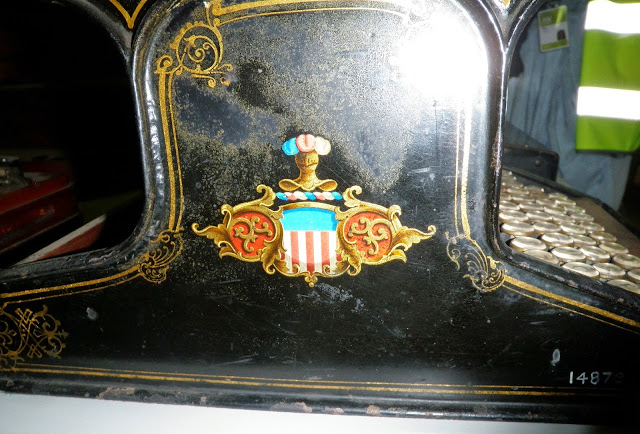 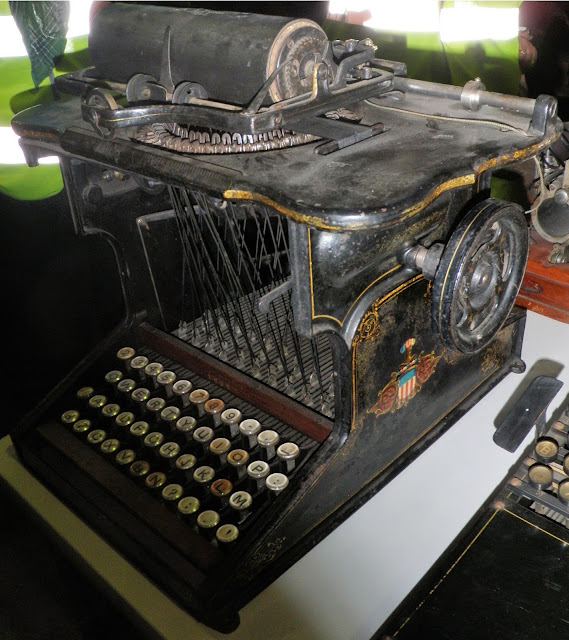 Apart from typewriters, Museum Victoria holds some really interesting typewriter-related items, including these old Underwood pamphlets donated to the museum by Stott & Hoare (from 1912 jointly owned by Underwood): 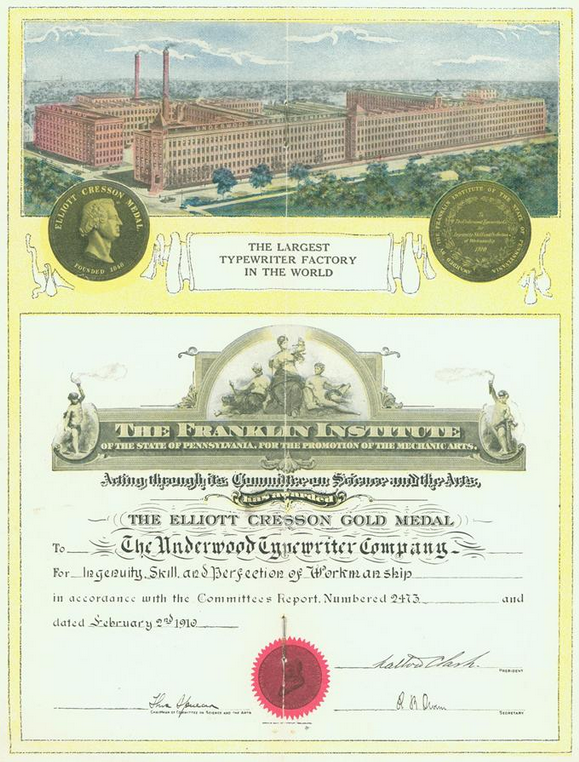 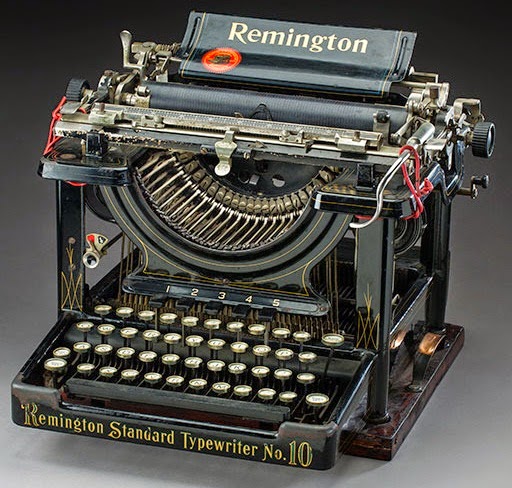 Posted by Robert Messenger at 12:49