Q: What Links a Pommy Princess with a Portland Pub? A: An Aristocratic Typewriter, of course! 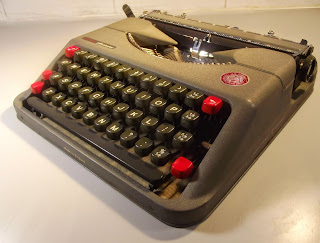 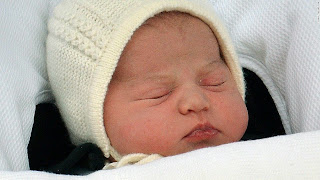 In the first week of May, a royal princess was born in England and a typewriter-festooned hotel opened in Portland, Maine. The baby is called Charlotte Elizabeth Diana Mountbatten-Windsor, and the hotel is called the Press, because the building 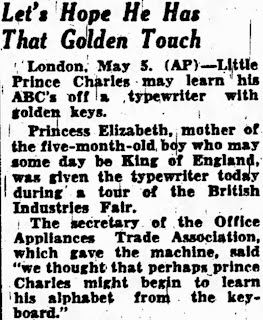 is the former home of the The Portland Press Herald newspaper. In the first week of May 1949, this Maine newspaper ran the following item at the top centre of page 6:
"Little Prince Charles" is still, 66 years later, Prince Charles, but he's now old enough to be the grandfather of Princess Charlotte. "Some day" has yet to come. The "Princess Elizabeth" in this story has at least since stepped up one rung on the royal ladder, and has been since 1952 the Queen, Charlotte's great-grandmother. 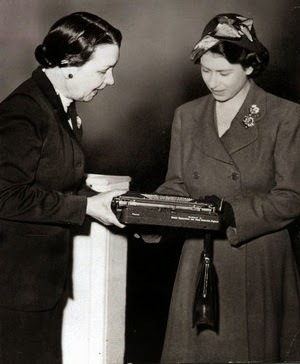 The gold-plated portable typewriter in question was an Empire Aristocrat, made by the British Typewriters Company in West Bromwich, England. The model had been launched the previous year. Here is how The Sydney Morning Herald covered the story, on the same day (May 6) as the The Portland Press Herald. Note Charles's mother thought giving the typewriter to a five-month-old to learn the alphabet was "a good idea". Well, he was a week off turning six-months-old! 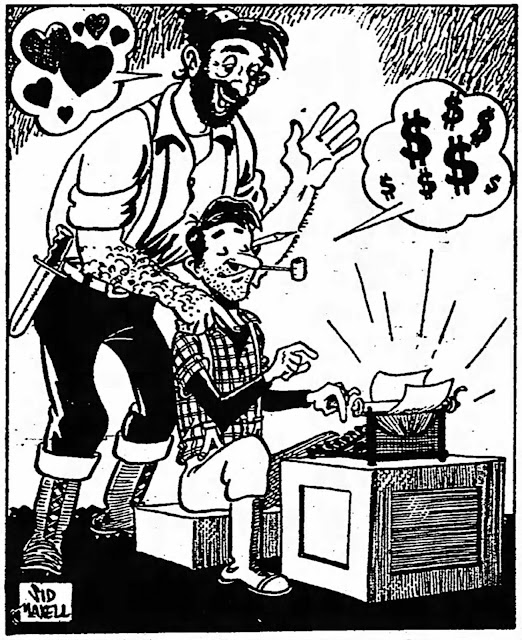 Jim (at typewriter): "Let's make big moolah by converting an old
newspaper building into a hotel and decorating it with typewriters."
Charlie: "I love it!"
From The Portland Press Herald, 1949 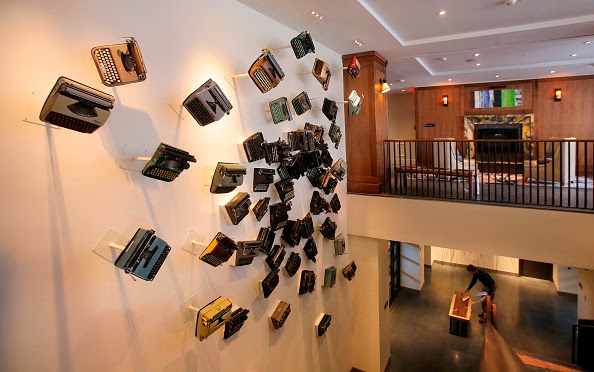 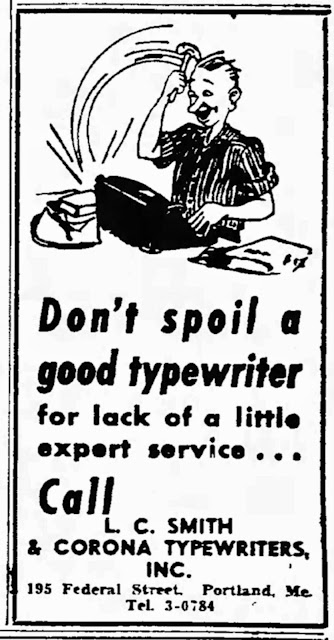 From The Portland Press Herald, 1949 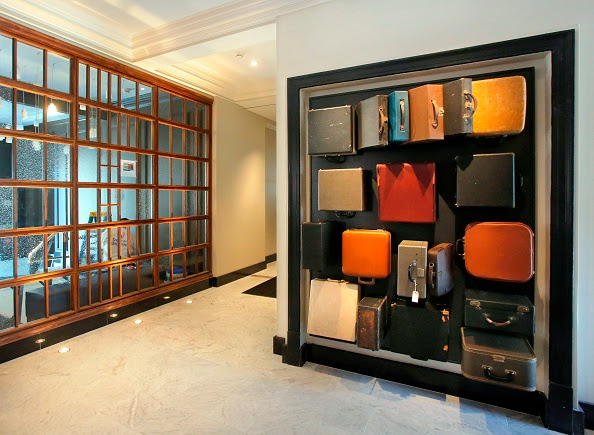 Typewriters (though not, it seems, an Empire Aristocrat) are mounted to a wall in the main lobby area of the Press Hotel and typewriter cases adorn another wall near the entrance. The "soaring assemblage of antique typewriters" (sic) was created by students at the Maine College of Art, which is one of the hotel’s partners. Developer Jim Brady has "branded" the history of the Portland Press Herald and newspaper journalism throughout the hotel. 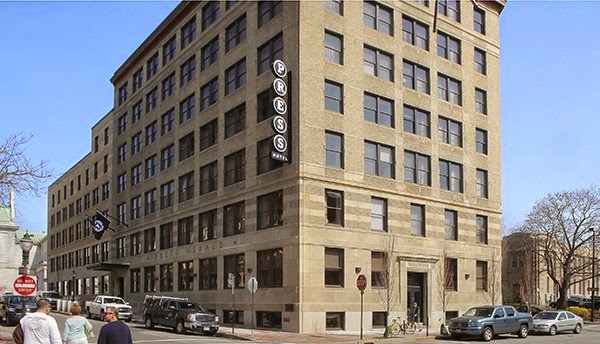 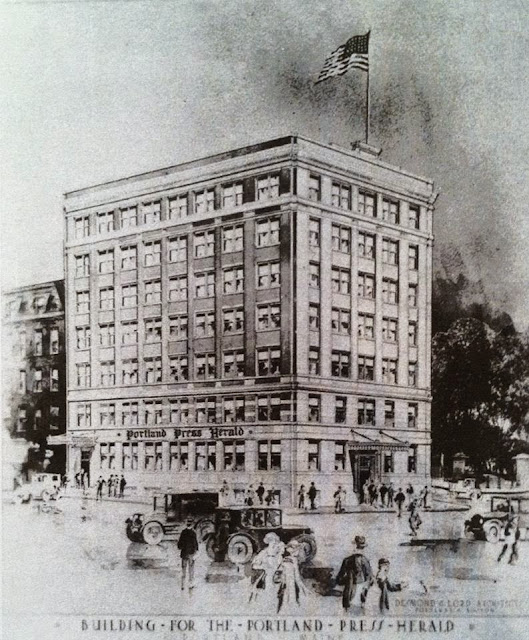 Standing at the corner of Exchange and Congress streets in Portland’s Old Port neighbourhood, the 1923 building was empty for two years. After the newspaper relocated in 2010, an interim owner gutted the seven-story brick building, leaving its plastered ceilings and long staircases intact. Brady bought the building and spent $10 million converting it from an empty landmark to a 110-room boutique hotel.

The Portland Press Herald was founded in 1862 on Congress Street. Its most famous journalist was the widely-travelled columnist and political writer May Craig. By coincidence, although Craig is photographed at her home below with a Royal 10 standard typewriter, it was with the Empire Aristocrat's mother machine, the Hermes Baby portable, that she so extensively globetrotted, filing columns for the Press Herald from parts far and wide in the late 1940s. 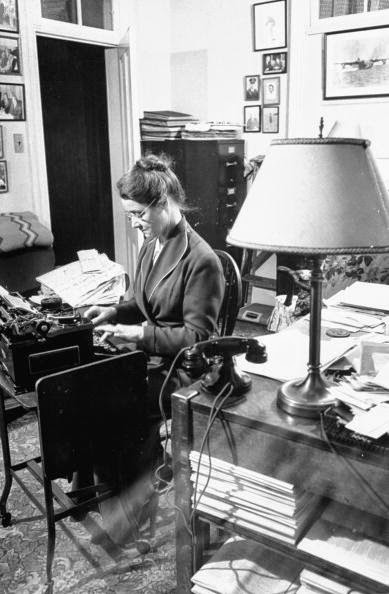 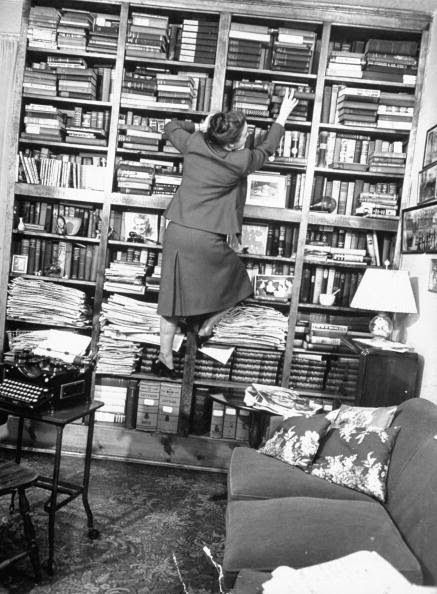 Elisabeth May Adams Craig (born December 19, 1889, at Coosaw Mines, South Carolina; died July 15, 1975, in Silver Spring, Maryland) covered World War II and the Korean War as well as US politics. She wrote her "Inside Washington" column for almost 50 years. She took on leadership roles within the Women's National Press Club and Eleanor Roosevelt's Press Conference Association, both organisations supporting women in journalism. 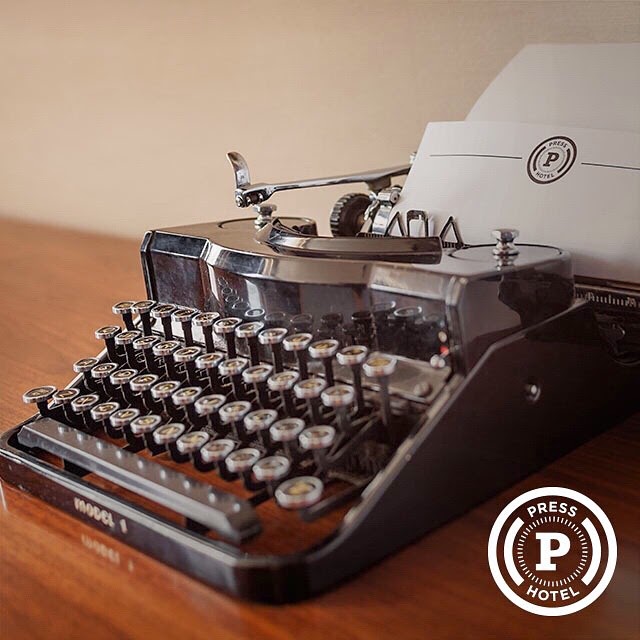 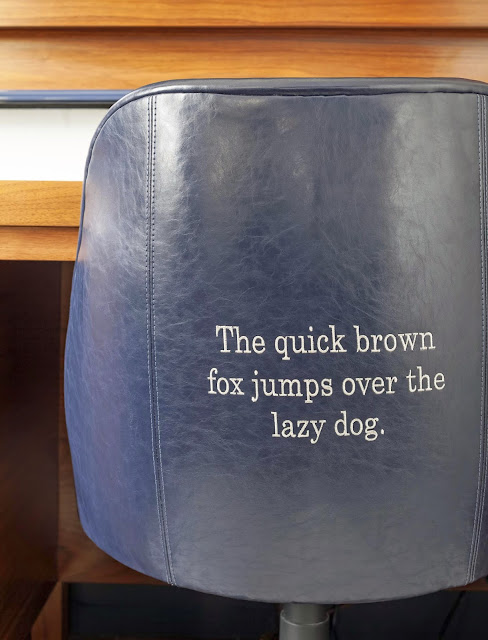 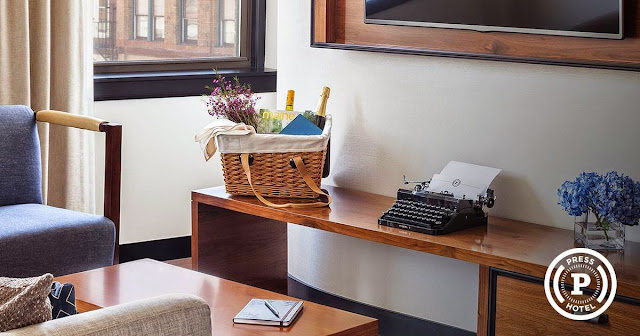 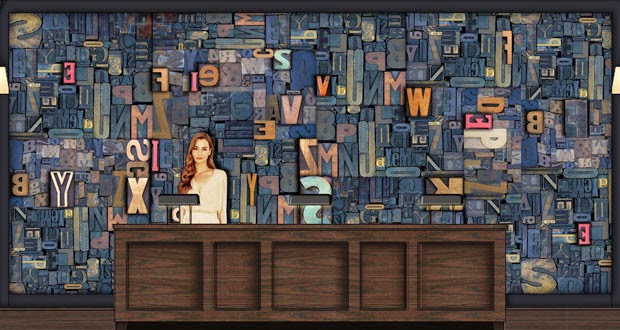 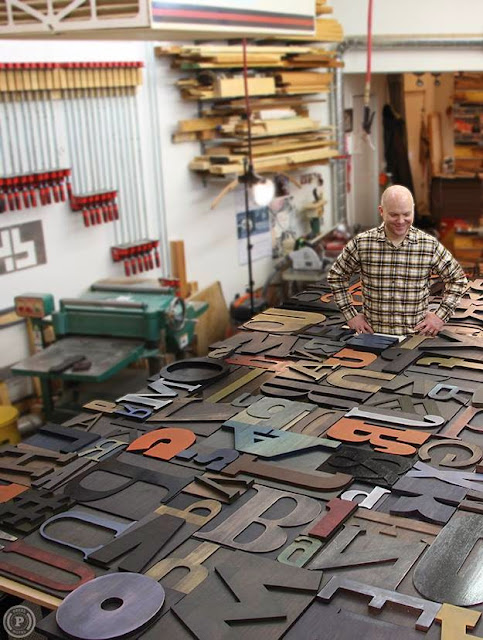 Given typewriters have now been returned to the Press Herald building, it is interesting to see how often typewriters were mentioned in the newspaper's pages in 1949, when Prince Charles was given his Empire Aristocrat: 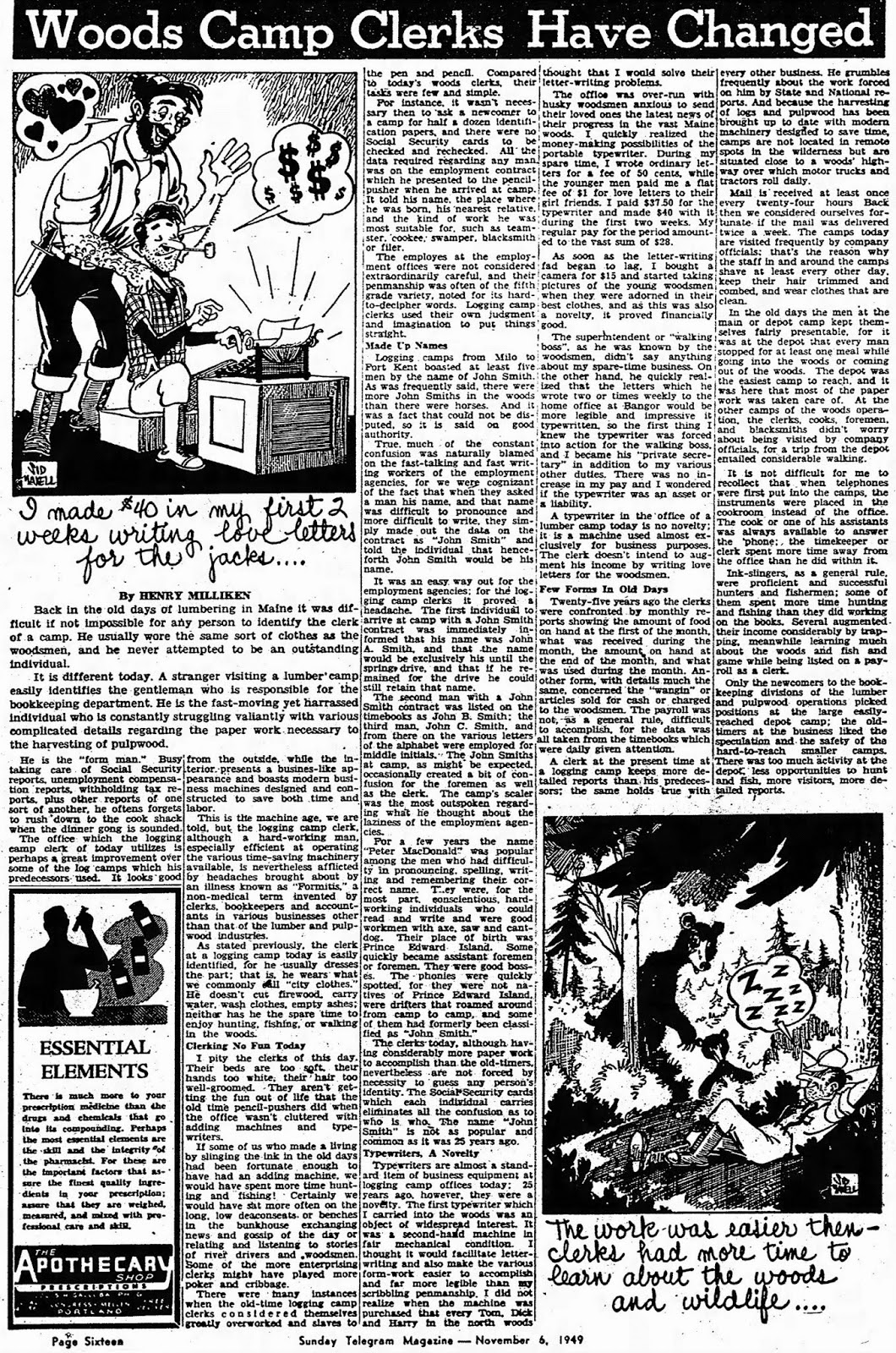 Henry Alston Milliken (1907-) was a lifelong Mainer and avid hunter. He wrote stories ranging from a description of his first lessons in ruffed grouse hunting all the way to pursuing deer in the deep woods of Maine as an experienced hunter. He was born and raised in the Hancock County area of Downeast Maine. His father was a farmer and woodsman, as well as an avid hunter. It appears that Milliken spent much of his adult life in the Freeport, Maine area, taking regular forays into the woods to hunt. He hunted grouse, woodcock, pheasants, deer, bear, bobcats, raccoons and other game. 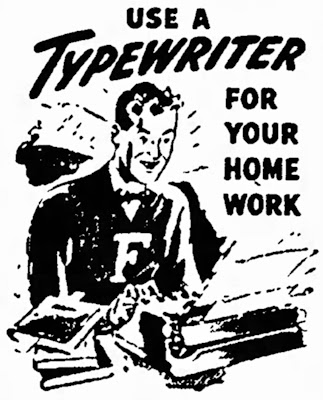 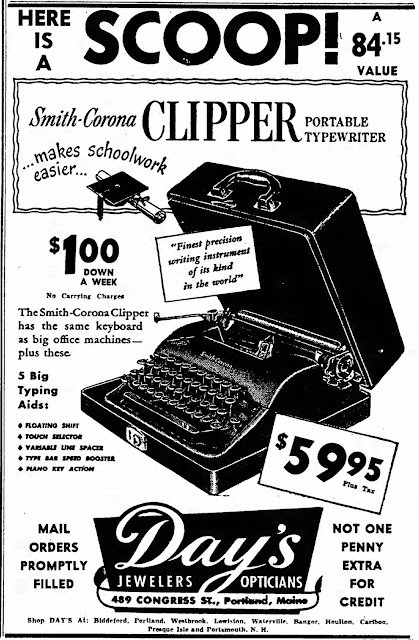 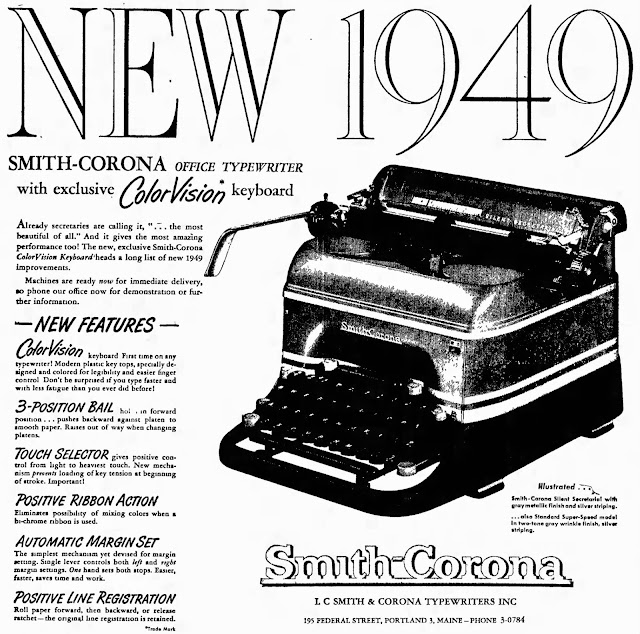 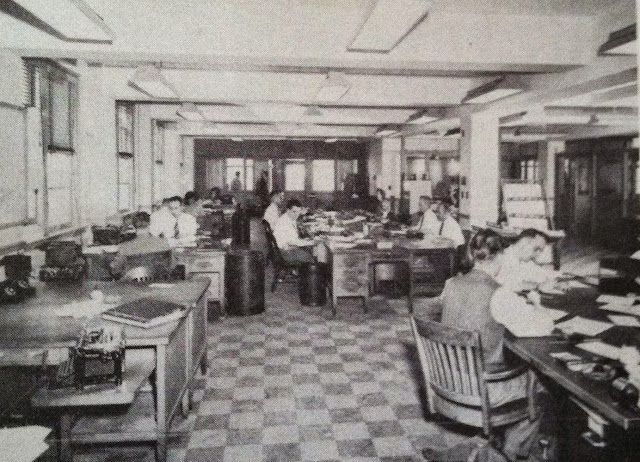 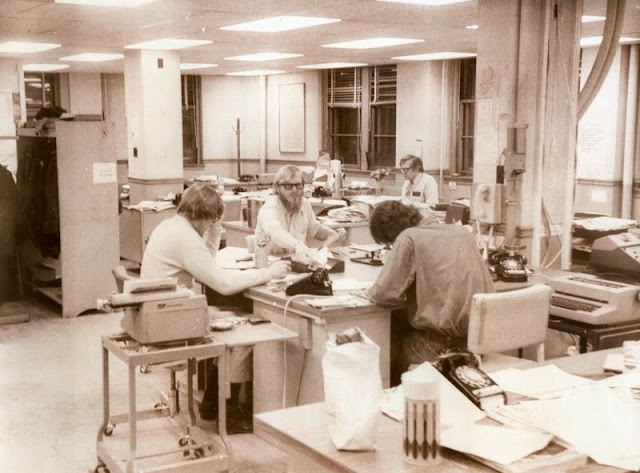 And one for Mother's Day: 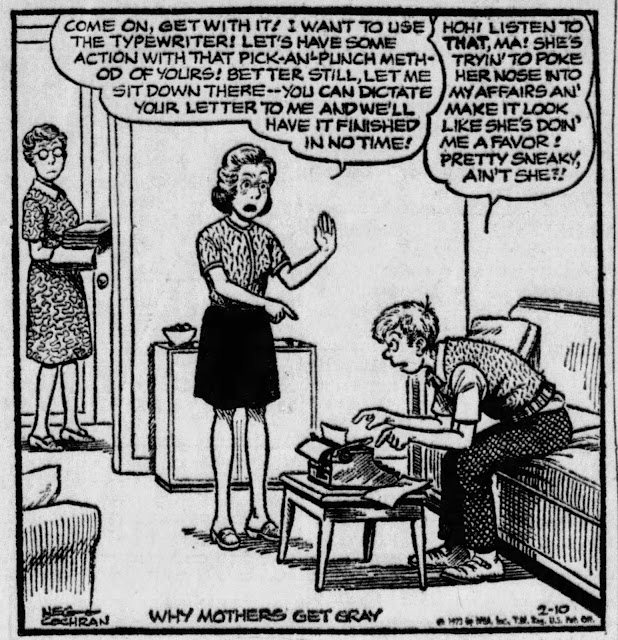 Posted by Robert Messenger at 23:01

Well, I'd say that The Press Hotel, is where we need to have out next Typosphere convention! What a cool, and innovative idea. Inspiring.

I agree with Donald. Any place that would display a Remington Rand Model 1 is after my own heart (first typewriter I ever bought).