Consensus on the FuNkOMatic typewriter 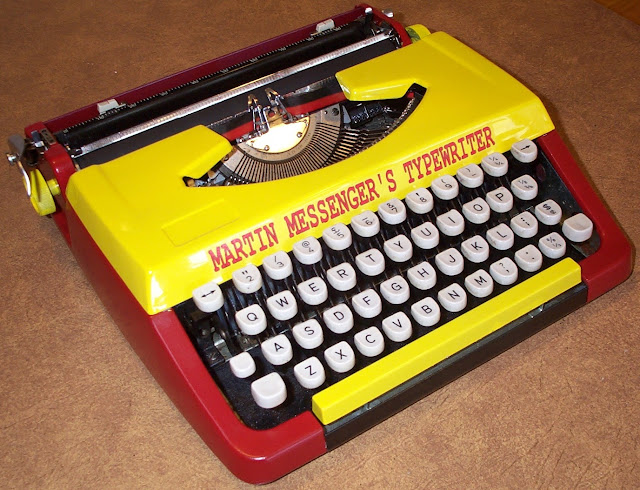 These are a couple of Brothers I repainted some years ago for my sons. They picked the colours.
I've got better at it with experience, I promise. 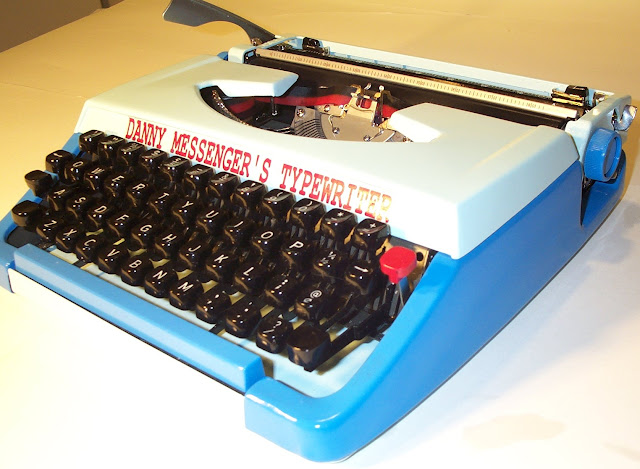 Cheers to Scott, Rino, Nat, Uriel, Florian, Richard P, Miguel, Ken and Bill for their willingness to have some input into the FuNkOMatic portable typewriter project.


The consensus seems to be with the name. So it’s definitely to be the:
FUNKOMATIC!
Or, to be more consistent, the FuNkOMatic.
Unlike the examples above, the name will go in the little panel at the front of the ribbon spool cover. It’ll look quite stylish, professionally made, in a colour to be decided. Maybe this typeface?
As for typewriter colours, I’m leaning toward Miguel’s suggestion of the body in “fluorescent Atomic Green”, and the typebar cover in “Radioactive Blue”.
But I also like Ken’s idea of purple, with the ribbon guard in pink – or maybe the other way around? Both would work. I already have a K-Mart Nakajima that’s factory-painted purple – I could just use the body or the ribbon cover and paint the rest pink.
And Nat’s two-tone scheme of hot pink and pink has a lot to recommend it.
Trouble is, I've found fluro pink a hard spray paint colour to work with. Maybe it needs a very light primer?
As a consensus, Bill’s purple and lime green to make a Barney typewriter is a serious contender. The BaRnEyOMaTic?
Bill’s suggestion of heat-shrinking the platen a different colour, as Richard did with his Torpedo, is also well worth checking out.
I suspect I went overboard with these two for workmate Claire Low, a Hello Kitty devotee. Ah, I was just having some fun and got a little carried away! Don't worry, I'll be a bit more constrained with the FuNkOMatic! Fashion editor Claire, by the way, wrote the story about Adwoa's dress. 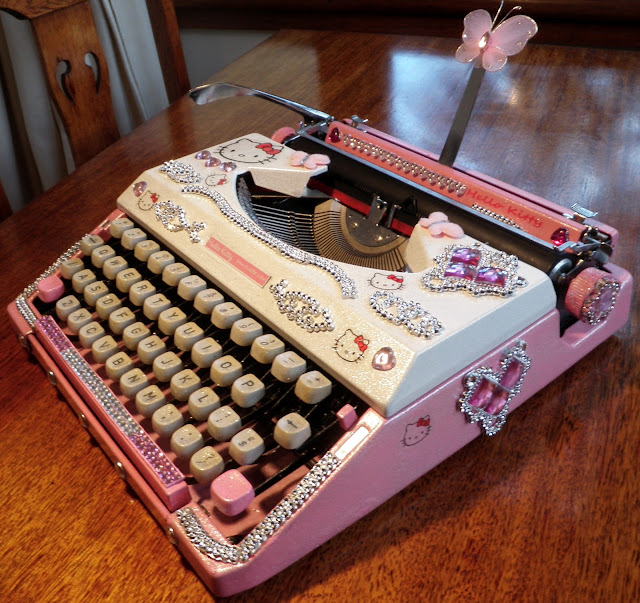 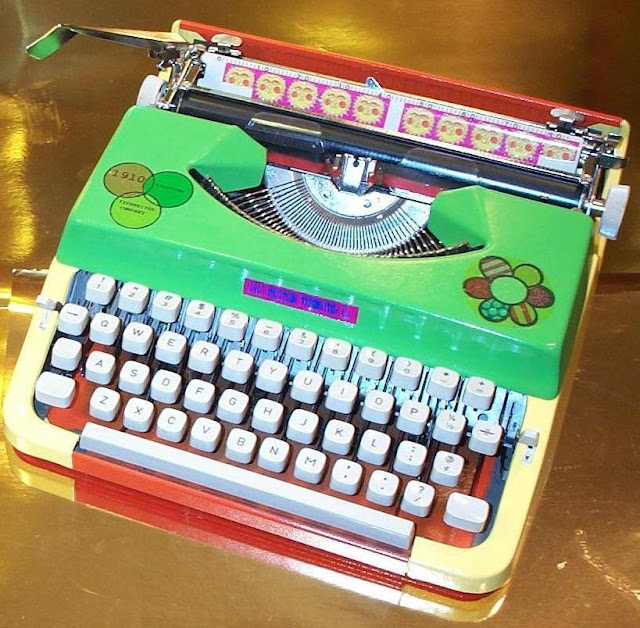 There was a positive outcome from this last machine. We were doing a Bubblegum music show on radio, so I "made" a "Bubblegum typewriter" - the 1910 Fruitgum Company Typewriter. Talking about it (in much jest) on air resulted in a couple calling the station and offering me a beautiful Mercdes Superba. Can't complain about that!
Posted by Robert Messenger at 14:26

Those machines are fantastic! XD I bet their users love them precisely because they are customized specially for them.

I recently rescued a Corona 3 from the scrap pile (almost literally) and had it painted in a non-standard color combination: orange-red and black. It's amazing how these little projects can really make you appreciate how a machine is built!

I can't wait to see how the "funky all metal atomic typewriter" looks like after painting!

I'd say the more toxic the combination, the better. Do one totally crazy combination and do one in "mid-century" or "Mad Men" colors just to see what the ebay price differential is. Who knows? You could create a cottage industry that funds your rare typewriter acquisitions!

The Hello Kitty conversion is amazing. I don't think it is possible to go too far with her. In Washington, D.C., I saw a small car with every bit of the interior decked out Hello Kitty style. The typewriter is sedate by comparison.

Too much hello kitty really can be a bad thing. Unfortunately, that makes my bosses office a very bad thing.

I've been painting a few myself, but I haven't gone to the same extent as you have!

These projects are really fun. Don't hold back on the Funkomatic!

hahaha good gravy those are far out!

I've shown my boss your Hello Kitty typewriter. She want 'Awwwwwww' with a big smile on her face.

I'm just glad she had limited say on how our department is decorated.

I cannot wait to see how this turns out! I agree with Richard on the font...that would be funky fresh to the max.

Oh. my. goodness.
I still can see Hello Kitty when I close my eyes.

You know what? Given so many combinations...
Maybe you should do them all!