The Quest For My Own Holy Grail Typewriter 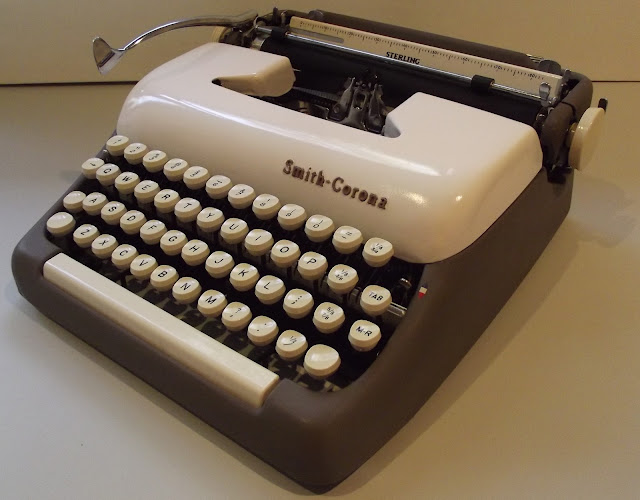 In a series of interviews and talks before and after the opening of the typewriter exhibition at the Canberra Museum and Gallery, I have invariably been asked to explain – quite naturally, I suppose – what is behind my fascination with typewriters, and why my collection keeps growing. 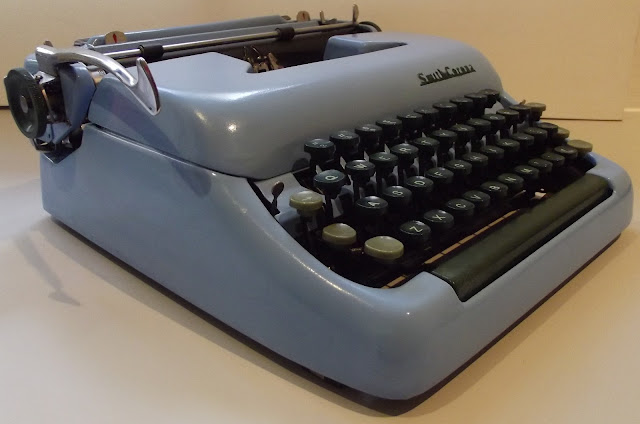 My answer has been that I am on an eternal search for my Holy Grail typewriter – the typewriter that I find best suits me and my typing style, the one with which I am most at ease when writing.
I say "eternal" because I've been consciously refusing to end this quest. 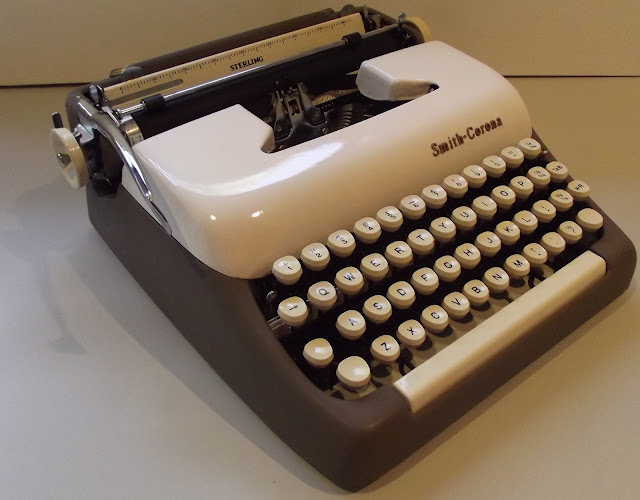 I have almost certainly already found my Holy Grail – at least, that is, the list is down to about five or six outstanding contenders, and the Holy Grail is quite probably among them. But I keep on searching, perhaps kidding myself that “the one” is still out there somewhere, just waiting to be found by me. It’s really no more than an excuse to keep on acquiring different typewriters and trying them out for “feel”.
But it's also become evident that the "feel" isn't everything: the look of the machine, and of course the font and clarity of the type impression, must be pleasing to the eye too. 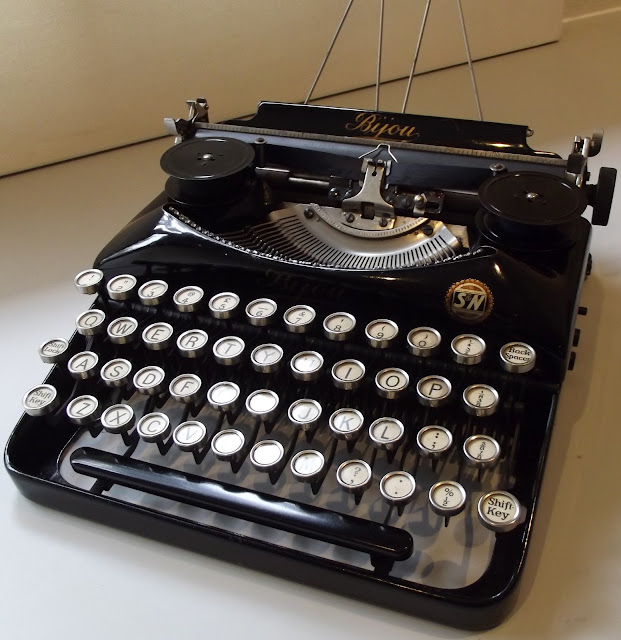 Of those on the short list, the early 1930s Bijou four-bank I used during the Bijou on the Nile collaborative fiction project this year would have to be up near the top. For such a small, lightweight machine, it works magnificently. 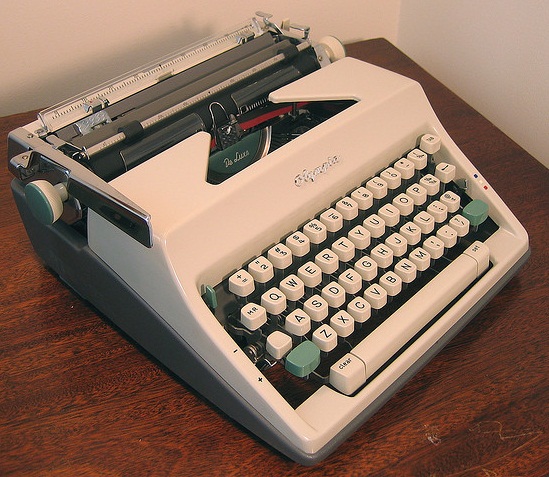 Image by typebarsmack (Steve) on flickr
Ever since my then newspaper’s chief of staff, Jack Turner, acquired on “appro” an Olympia SM9 in 1969, I have had a particular fondness for that model, too. In 43 years, my high opinion of it has not changed. 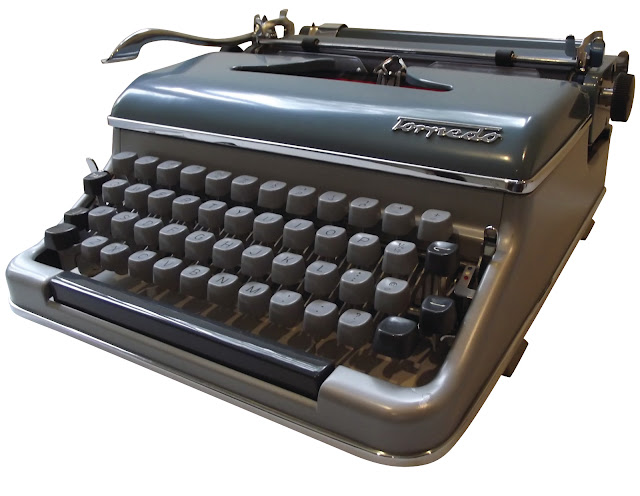 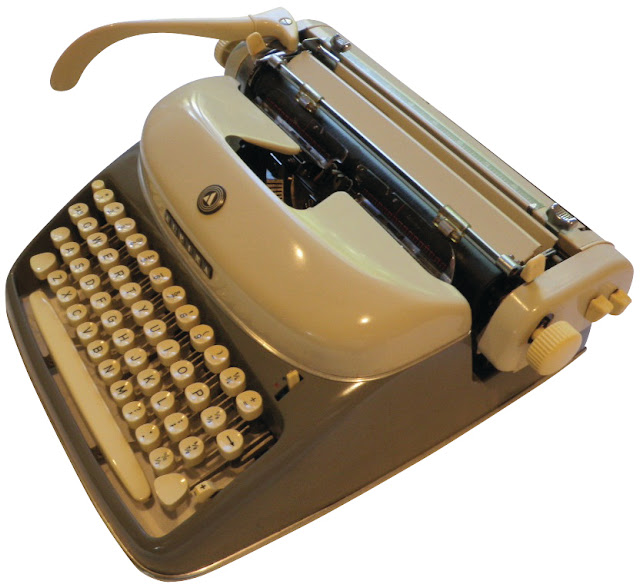 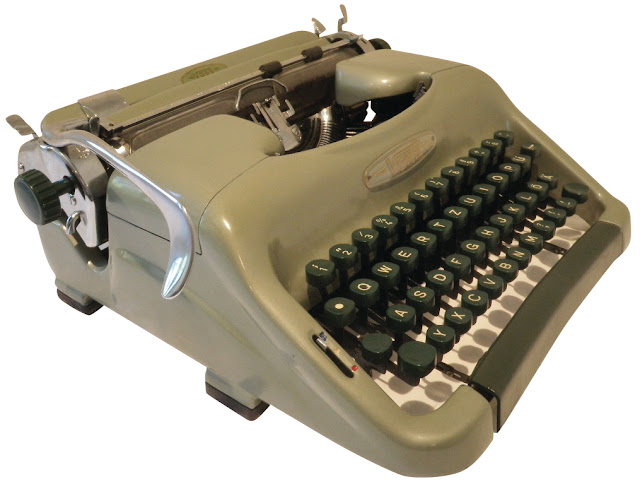 I have found other German-engineered machines, such as the Torpedo Model 18, the Alpina and the Voss Model 24, beautiful to use as well. 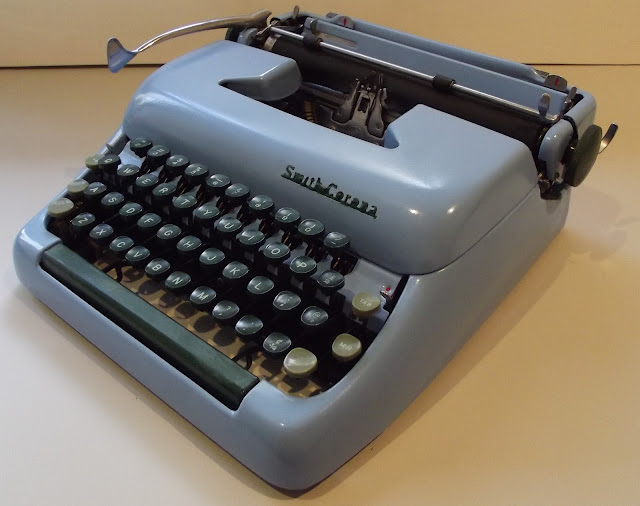 But I keep returning to the Smith-Corona  Super 5 series and have found most of these Joe Barkdoll-designed machines virtually unbeatable. 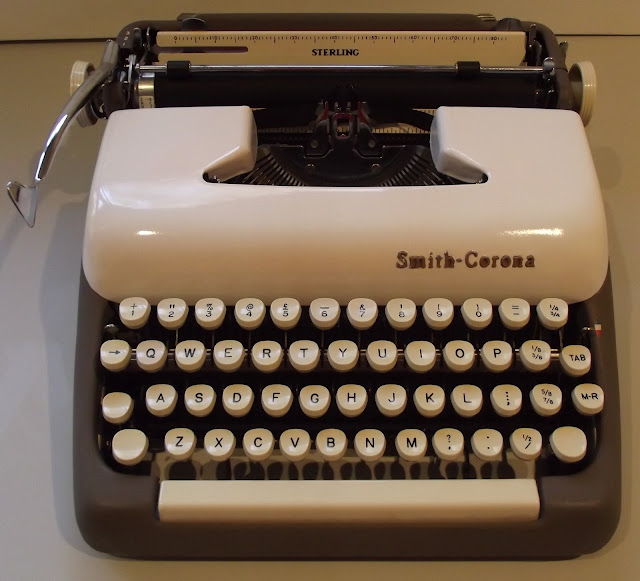 I find them hard to resist when they come up for sale on Australian eBay. They do not come up all that often, and for reasons that are unfathomable, they often come up at, and sell for, very reasonable prices.
Take for example this Canadian-made Sterling (above), which was put up for sale a few weeks ago by a Geelong, Victoria, antiques store at what I considered a low price ($29). I was one of only two bidders and won it for $31. With its “new” keyboard layout, it’s a brilliant typer, definitely one of the best machines I have ever used. I especially like its pica font. 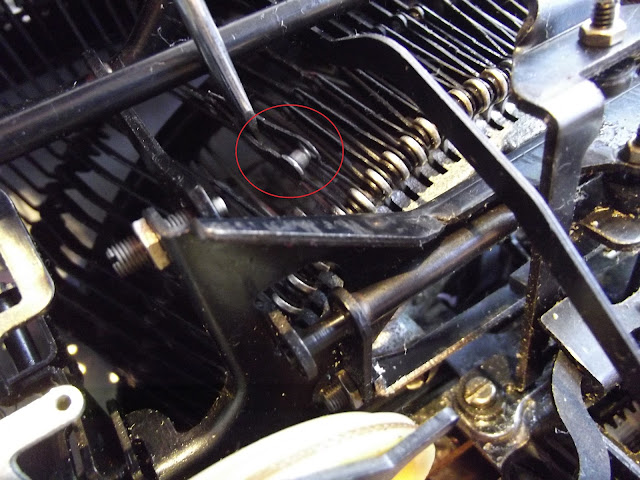 On two Smith-Corona Super 5 series typewriters I have worked on now, this and a pink one, I found the flexible grips which connect to the typebar have come unattached. It is a simple job to reattach them to the typebar, but this seems to be a small problem which does occur occasionally with this model. The top end of the rod has a side bar which moves up and down to allow for the grip to be reattached through a small hole on the bottom of the typebar. 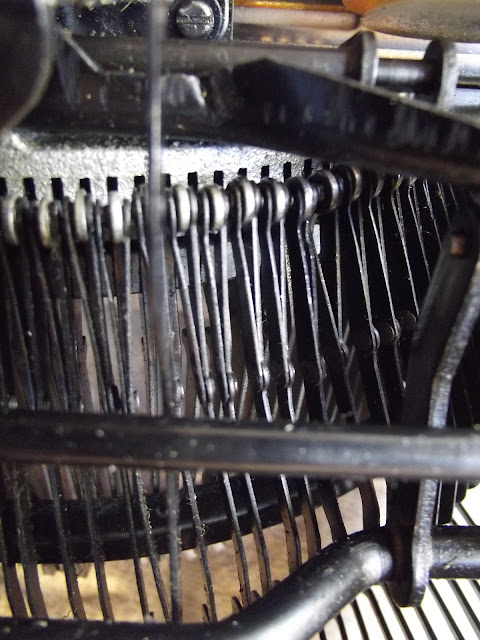 Perhaps the “look” or size of machines in this Smith-Corona series puts off other buyers. The paintwork is often not all that appealing. But I find them just the right size, and relatively light in weight. Also, they are an easy machine to take apart and repaint in more agreeable colours, such as in the case of this earlier Smith-Corona: 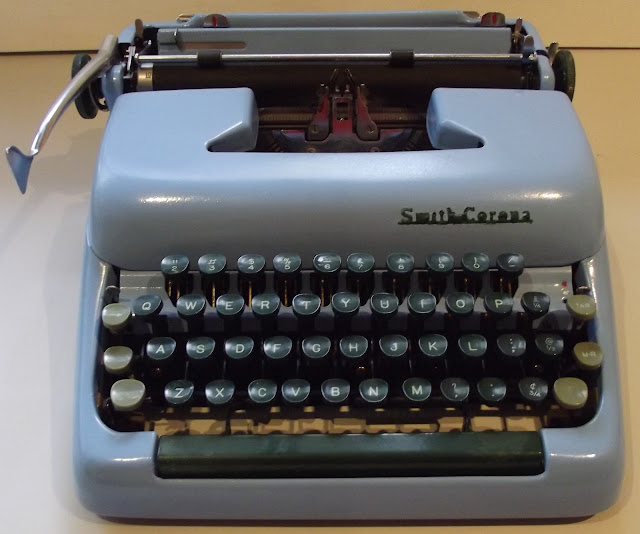 Many years ago, Richard Amery remarked that he had a Smith-Corona which he found a beautiful typer, but on which the paintwork was worn, dull, dirty and off-putting. He asked if I would “restore” the typewriter for him. It was one of the first such “restoration” jobs I attempted, and Richard was very satisfied with the result: 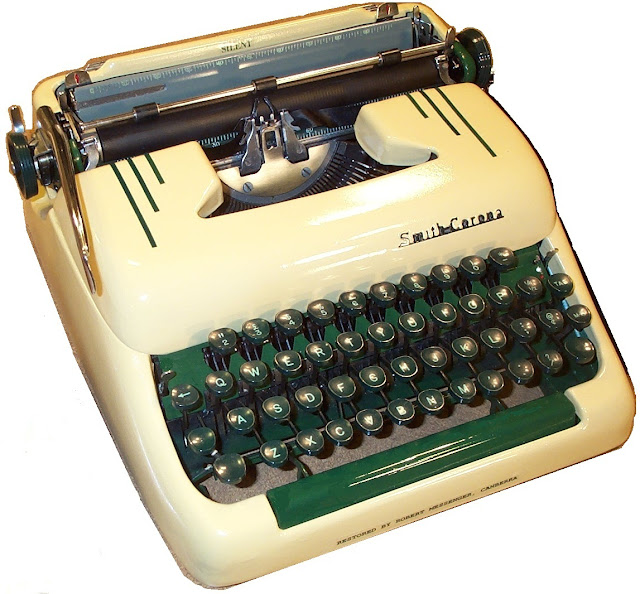 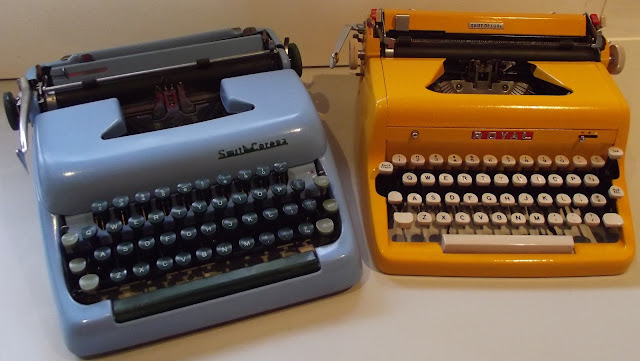 My best “restoration” job involves this yellow Royal, but I think the pale blue Smith-Corona now ranks up with it. This latter machine has now had three new lives: in silver paint, without any paint and now with a pale blue paint job: 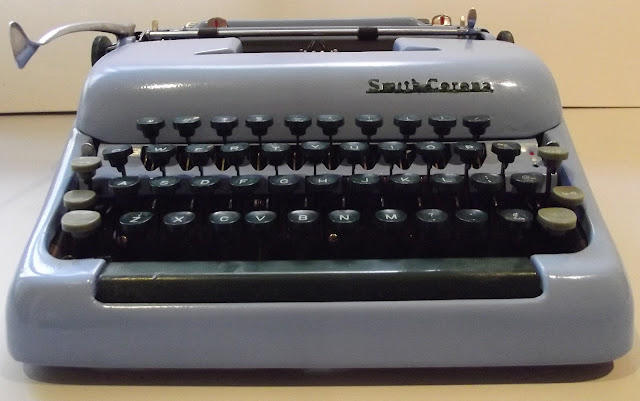 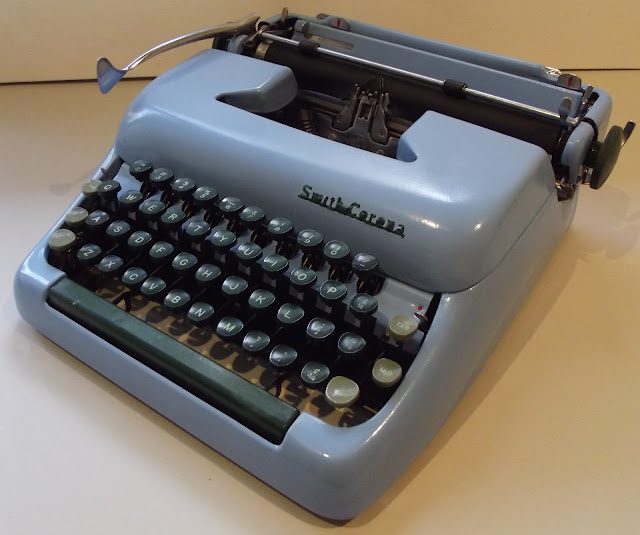 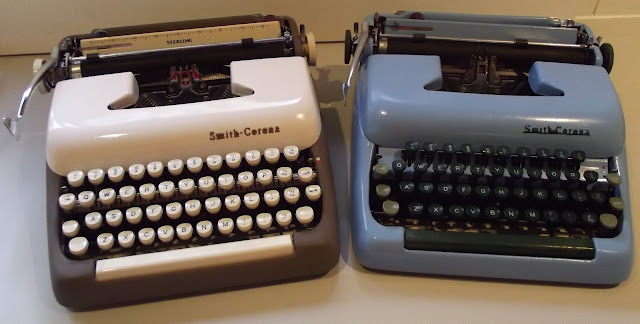 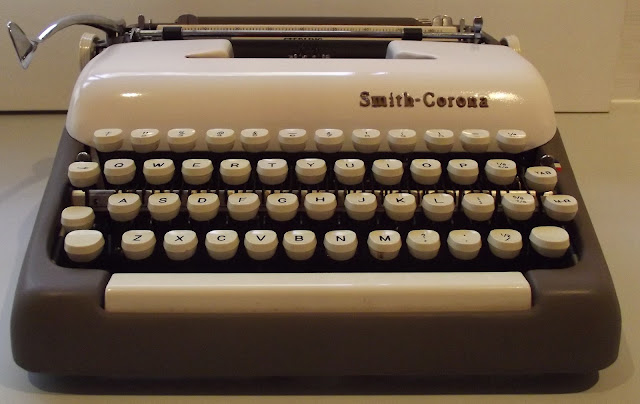 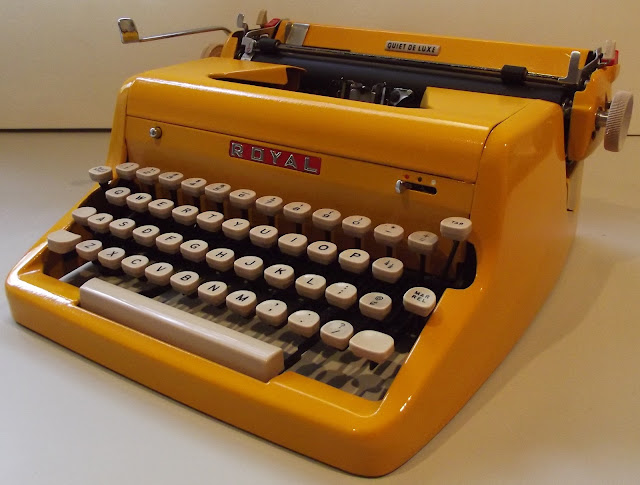 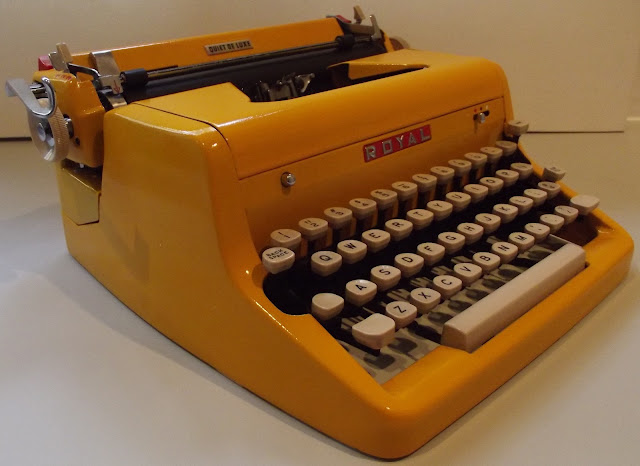 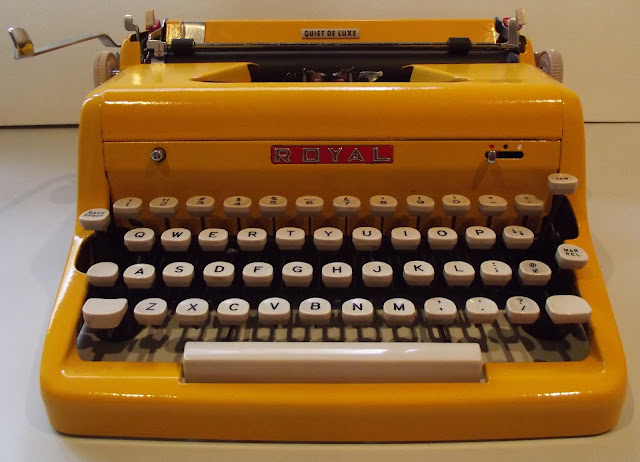 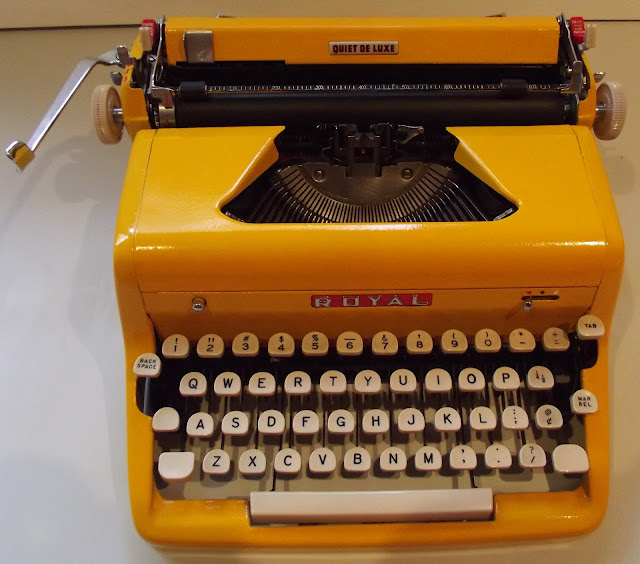 Posted by Robert Messenger at 13:40

Doesn't the yellow Royal look a lot like the Alba toy typewriter? http://www.flickr.com/photos/shordzi/5825310602/

That two-tone Corona is gorgeous!

I really like the design of those Smith-Coronas. Recently I saw one like them for sale in the local e-market, might have to take a look at it.

I couldn't have explained better why my own collection keeps growing. Like you said, I really like trying out many typewriters and see how they "feel". As of now, my "top list" would include the Corona 3, the Remington 12, the Olympia SM3, and the IBM Selectric II.

I feel the Royal is missing a 'Tonka' badge.

That Royal. Love the color; yellow is my favorite, and I like bright colors; most typewriters seem to come only in pale or dark colors. My red Brother D220 is great too, but your Royal takes the cake. Great post!

Nice typewriters.
Great paint work.
I found several old Smith-Corona typewriters to be fine typers. Even my Classic-12s are nice. My Royal Companion was much nicer than the newer Royals.

I think I am in the same boat. So many are 8 or 9 out of 10, but whether it's the placement of Backspace, the shape of the keys, the size and weight, or something else, The perfect fit eludes me thus far. Not to mention the perfect typeface...

Perfection is so elusive, but the chase is fun!

I like your finalists and have experience with the German machines, but not with the Smith Corona. I picked up a Tower President 12 at a thrift store this week. It needs a new carriage knob and some TLC before I get to experience the magic.

The repaints are very nice. I like the goldenrod Royal.

I know exactly what you mean about the Holy Grail. It would feel perfect, have all the features, look fantastic ... I like to imagine that some unheard-of typewriter just around the corner fits all these requirements to a T. It's one of many factors that keeps me searching.

Smith-Coronas seem to be pretty rare here. In the past year I haven't seen any manual Smith-Corona offered for sale. But I'll keep trying, since I love their look.

My Tower President is the only machine I have that comes close to the Smith Corona design. The touch is much lighter than what I've been used to over the last several weeks, but I like it all the same. My technique isn't perfect since I've taken it off the shelf after a long hiatus, so I won't rank it as inferior or superior to anything until I'm more familiar with it's rhythm.

As far as favorite machines to use, mine are: Olympia SM3, Underwood 21, Lettera 32, Royal KMM, and Royal Deluxe.

Thank you so much for this blog on typewriters. I am too looking for a good Smith Corona typewriter. I would be grateful to you if you could let me know about any such available me chimneys if you come across.