Canberra went typewriter crazy yesterday when the From A to Z: Robert Messenger's Typewriters two-month-long exhibition opened before a record crowd for such an event at the Canberra Museum and Gallery.
The Honourable Richard Amery, Member of the New South Wales Parliament and himself an avid typewriter collector, officially opened the event at 3 o'clock on Saturday afternoon.
But unofficially the exhibition's doors had opened two-and-a-half days earlier, at 9 o'clock on Thursday morning, after massive publicity for the event appeared in The Canberra Times and drew crowds flocking to the display.
Yesterday, however, the doors were closed once more as Shane Breynard,  Director of Australian Capital Territory Museums and Galleries, performed the introductions and Mr Amery declared the exhibition open.
There were amazing scenes at the museum as people swarmed around the exhibits and many tried their hand at typing - some for the first time, many after a number of years of not having used a typewriter. It certainly was a great start to the event: 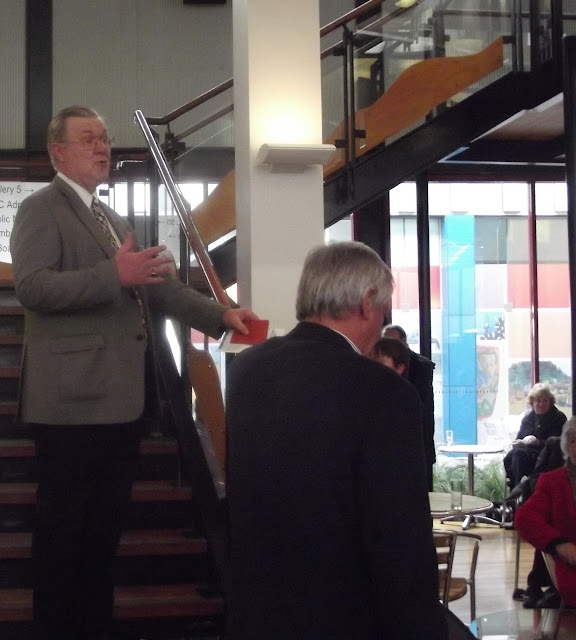 Richard Amery, left, opens the event while Robert Messenger, foreground, waits to give away some typewriters: An Alpina for Mr Amery and a Royal DeLuxe for exhibition curator, Rowan Henderson. A video of the presentations will follow. 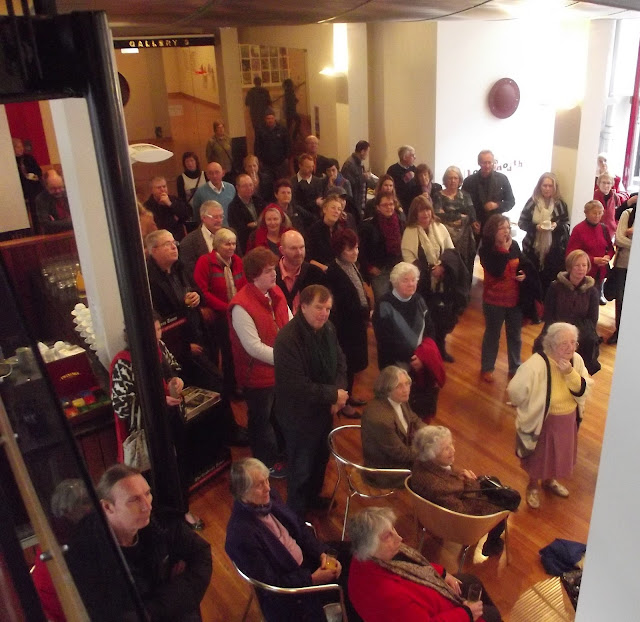 One section of the crowd which filled the museum's main foyer for the opening. Neil Lade, the original driving force behind the exhibition, can be seen standing below the round, maroon wall plaque 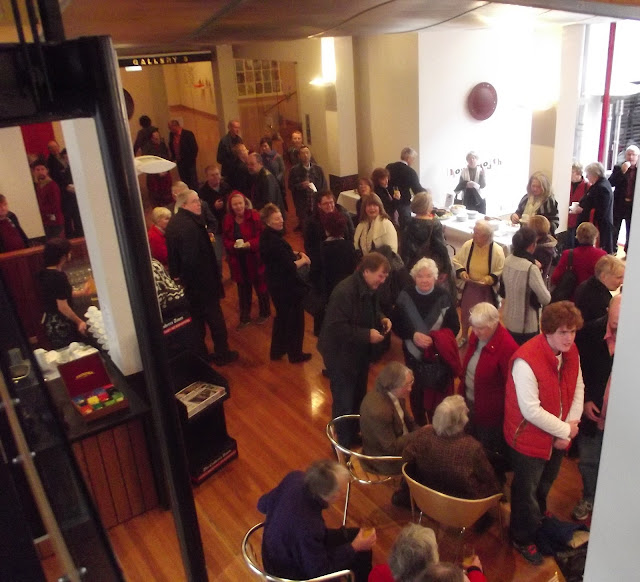 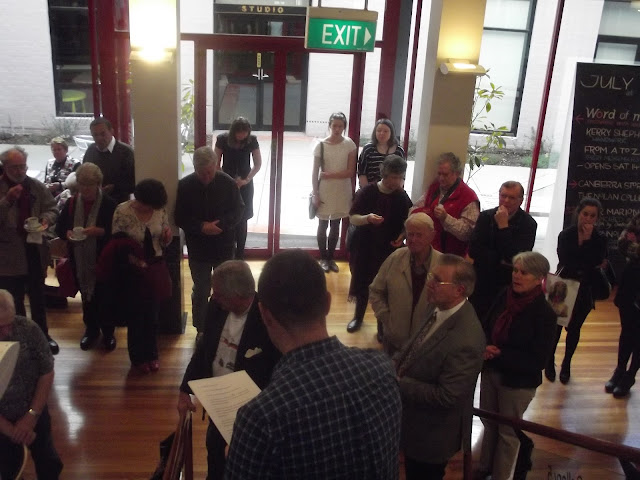 Shane Breynard makes the introductions while the crowd bows in deference to typewriters! 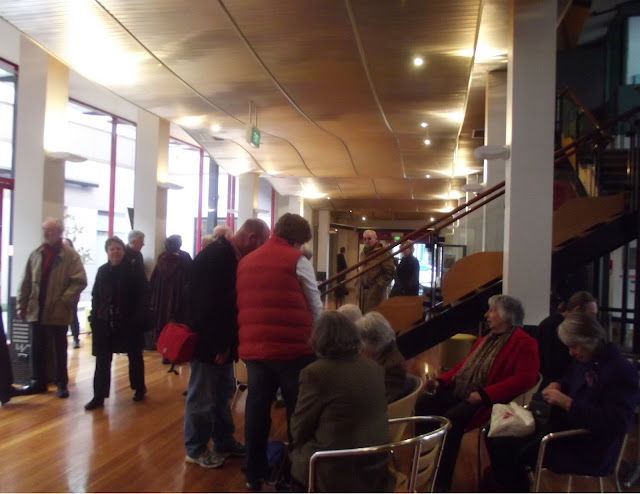 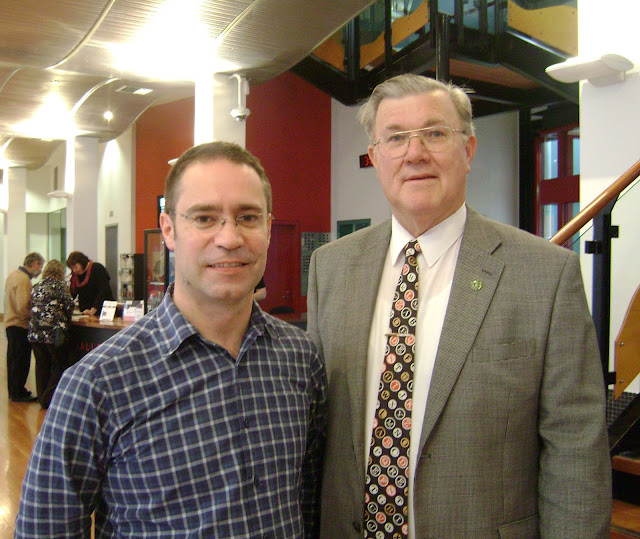 Shane Breynard, left and Richard Amery.
In the background, Peter  and Deborah Brill, who drove 3723 kilometres (2327 miles) across the Nullarbor Plain (it's Latin for "no trees") to be at the opening, can be seen signing in and buying a copy of Robert Messenger's new book, 101 Great Typewriters. Peter Brill built the exhibition's public-use IBM Selectric with the Blick keyboard. 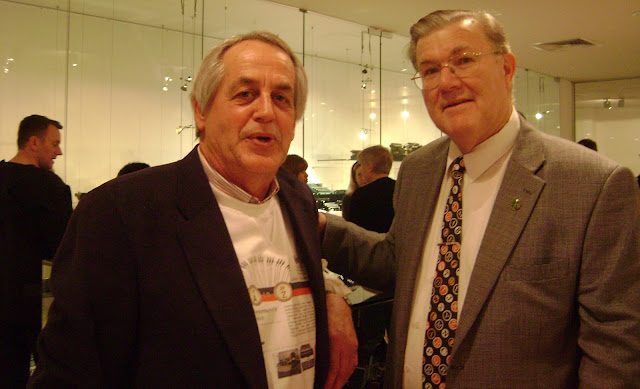 Robert Messenger and Richard Amery. Mr Amery later wrote, "What a great day ...  What a great tribute to your place in the typewriter world." 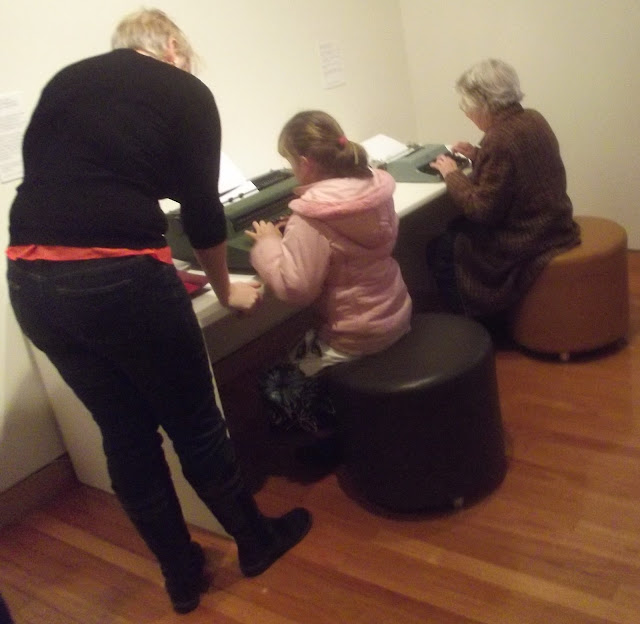 The young and the old try out new and old skills 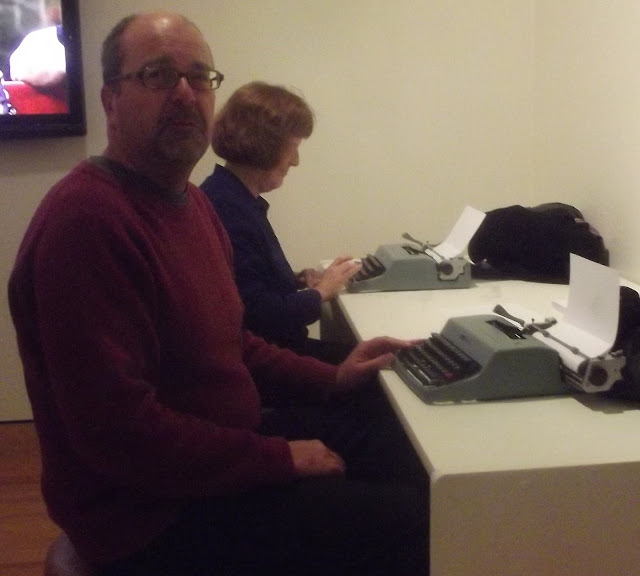 John McNamara and Wendy Hansen know how to type -
but they haven't tried it for some time! 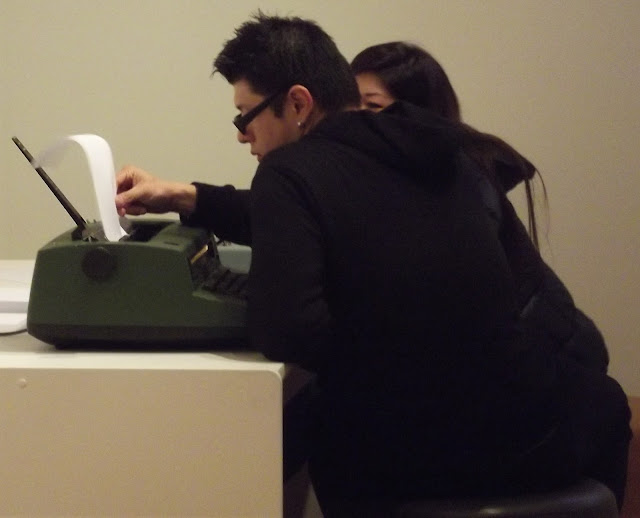 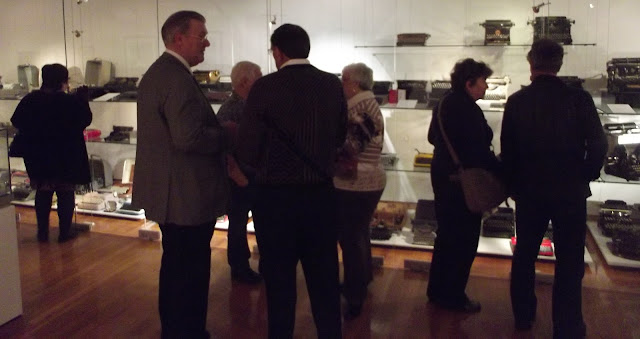 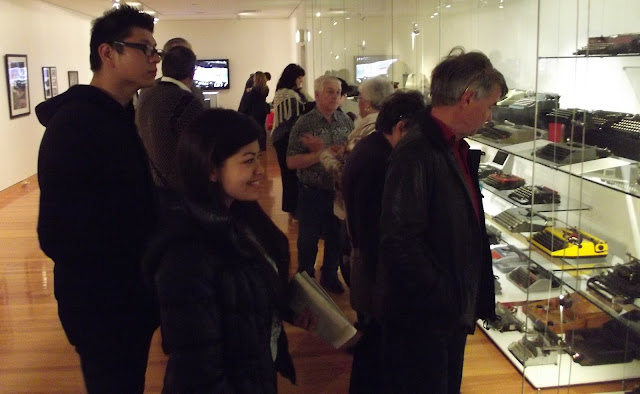 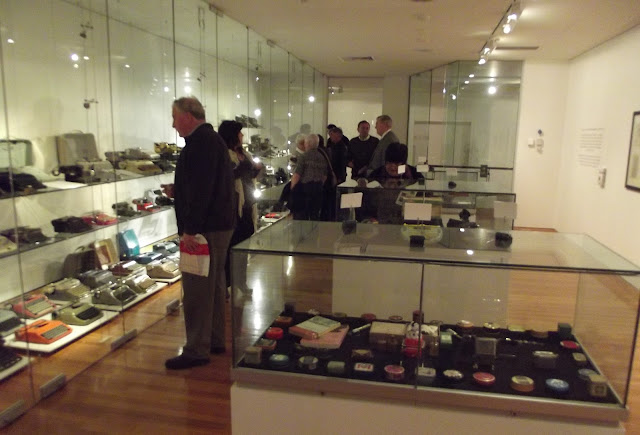 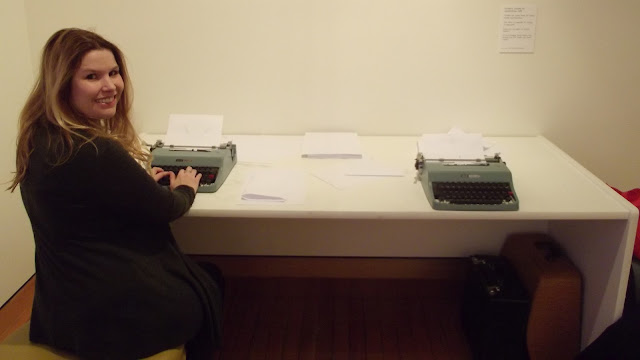 Emily Hansen, who did much to encourage and assist with the event,
tries out an Olivetti Lettera 32 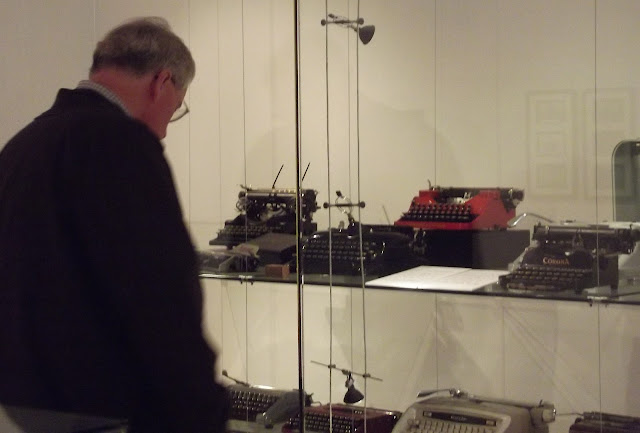 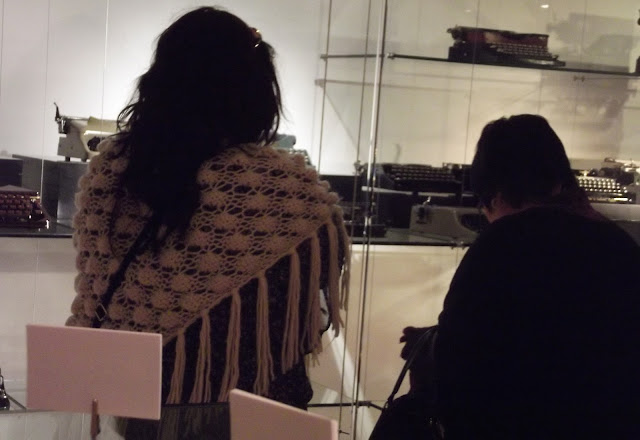 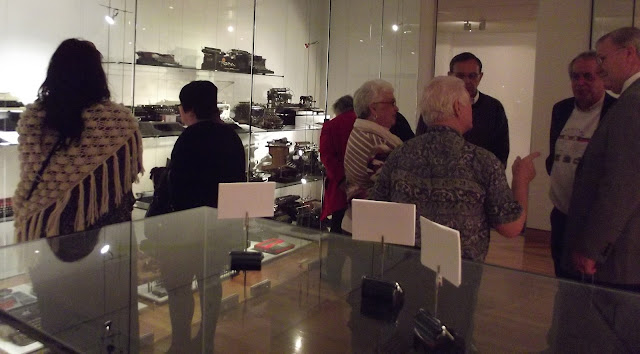 Terry Cooksley (back to camera) explains the mystery of typewriters to Lothan Gerhardt and his wife, who drove 432km (270 miles) down from Newcastle for the opening,  as well as, right, an intrigued Robert Messenger and Richard Amery. 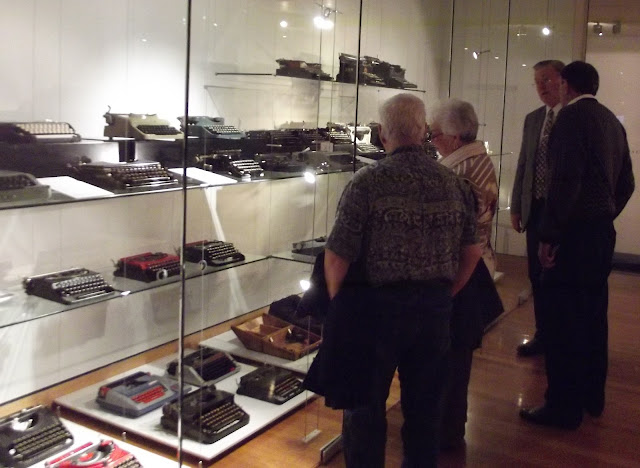 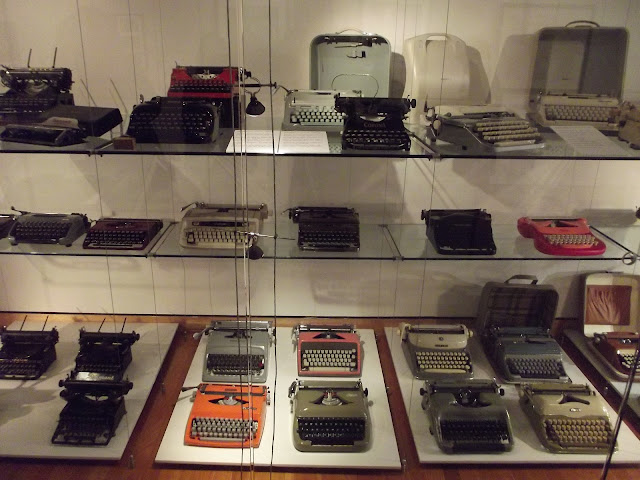 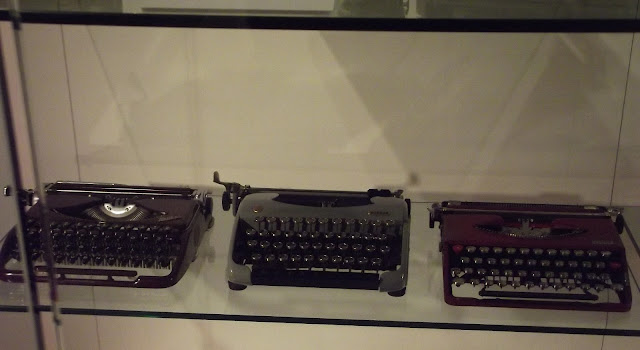 From Valencia to Cincinnati to Canberra: The much-travelled little Winsor snuggles down in its new home between a Gossen Tippa, right, which once served an architect on Canberra's building sites, and a Groma Kolibri which, who knows? Maybe it served a dissident writer in East Germany? 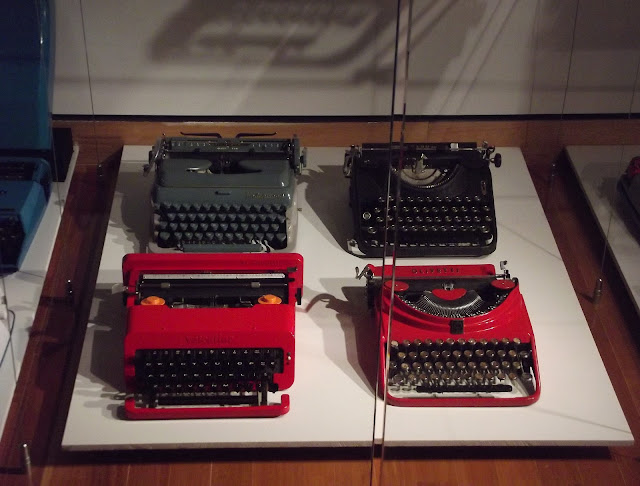 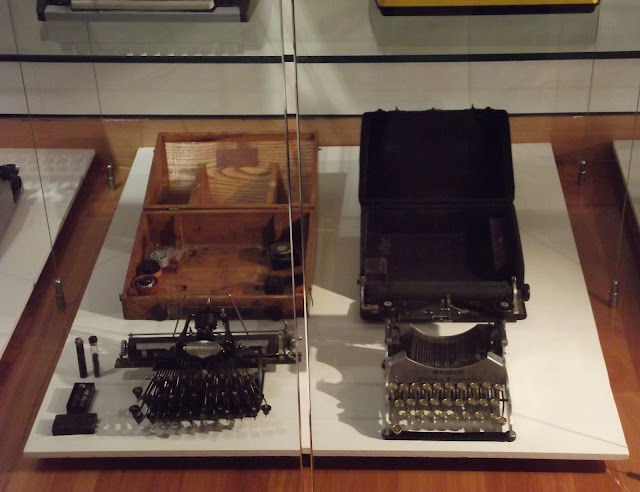 Everyone LOVED the Blick! But Peter Brill's jocular assessment: "Not enough Blicks!"

Posted by Robert Messenger at 10:30

Thank you, Richard. You, especially, were very much in the thoughts of Richard Amery and myself yesterday. Without your help and encouragement and advice, such an exhibition would never have happened. This is as much a tribute to you personally as anyone else - quite aside from the fact it contains a Rooy, a Barr and a Winsor which came from your collection. Thank you so much for everything.
PS: I added some more captions later.

Rob, this is wonderful. Sorry I couldn't be down for the opening.

And you look great in your gear too. I just hope that people don't see this as a historical collection, rahtern than a collection of living art, and feel enthused to pick up their own machines and once more bash at the keys.

Thank you, Scott. I still hope you can make down here while the exhibition is on (with the added incentive of a Palestine banking Erika Model 5 to collect!). Given your interest in the IBM Blick, Peter Brill will be here in Canberra for about a week. I'm hoping to avail of his time here to get him to look at a Smith-Corona Poweriter and an Olivetti Praxis 48. Cheers.

Congratulations for such a much-deserved successful opening! I'm sure even more will come with good word-of-mouth.

Nice to see the Olivetti section with that red ICO.

Thank you for this Ton, and also a big thank you for the plug on your Typewriter News section, which I neglected to mention last week in all the activity and excitement leading up to the opening. That was much appreciated.

Look at that - even I got a mention. I'm glad I went, and thanks once again for the typewriter Robert.

Congratulations on a great success! You got quite a turnout! Any chance the exhibition could tour?

congratulations and thank you for your great blog and work in keeping these great machines alive.

Due to work, in the past couple of weeks I was unable to follow the events here. Now I see nothing but great news. Congratulations for the opening!