Typewriters in the Public (and Parrot) Eye: Exhibition Publicity 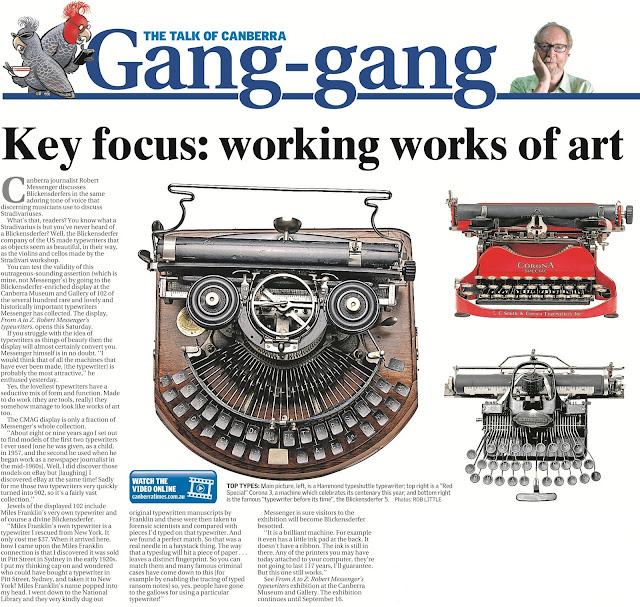 Richard Polt, who has as ever been so encouraging and helpful in the lead-up to the typewriter exhibition which opens in Canberra on Saturday (including writing a brilliant foreword to the book which accompanies the exhibition) expressed the hope yesterday that there would be “strong attendance”.
I'd also like to thank George Sommeregger, Dwayne Fuhlhage, Cameron Kopf, Michael Yulo, Bill MacLane, Ryan Adney, Deek and Scott Kernaghan for their kind comments and best wishes.
The signs are certainly good and this morning The Canberra Times, which is sponsoring the event, gave the exhibition extensive coverage. It may well be, indeed, "The Talk of Canberra", as this column masthead suggests ...

The lead article in Ian Warden’s column Gang-gang was devoted to the exhibition. 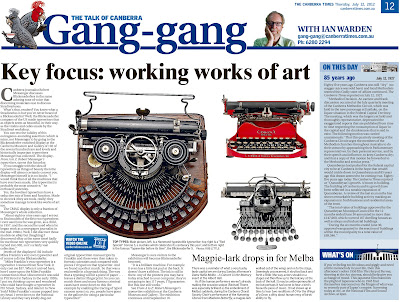 (The daily column, which appears on the back page of the first section of The Canberra Times, takes its name from the Gang-gang Cockatoo, the faunal emblem of the Australian Capital Territory. This native bird is easily identified by its distinctive call, which is described as resembling a creaky gate, or the sound of a cork being pulled from a wine bottle. 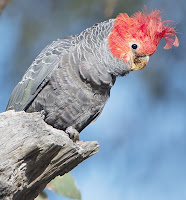 The name Gang-gang comes from a New South Wales Aboriginal language, either Ngunnawal or Wiradjuri.)
As well as the Gang-gang spread, online The Canberra Times has a video link, with words from me behind Rob Little’s images of typewriters which are in the exhibition:
See the Gang-gang column here: 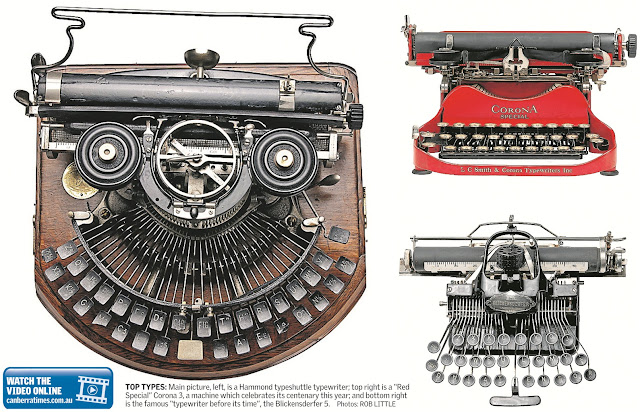 Key focus: working works of art
Canberra journalist Robert Messenger discusses Blickensderfers in the same adoring tone of voice that discerning musicians use to discuss Stradivariuses.
What’s that, readers? You know what a Stradivarius is but you’ve never heard of a Blickensderfer? Well, the Blickensderfer company of the US made typewriters that as objects seem as beautiful, in their way, as the violins and cellos made by the Stradivari workshop.
You can test the validity of this outrageous-sounding assertion (which is mine, not Messenger’s) by going to the Blickensderfer-enriched display at the Canberra Museum and Gallery of 102 of the several hundred rare and lovely and historically important typewriters Messenger has collected. The display, From A to Z. Robert Messenger’s Typewriters, opens this Saturday.
If you struggle with the idea of typewriters as things of beauty then the display will almost certainly convert you. Messenger himself is in no doubt. “I would think that of all the machines that have ever been made, [the typewriter] is probably the most attractive,” he enthused yesterday.
Yes, the loveliest typewriters have a seductive mix of form and function. Made to do work (they are tools, really) they somehow manage to look like works of art too.  How underappreciated they were by us in the days when, in a clicketty-clacketty newsroom or typing pool, we slaved over them. And how eerily silent, like the grave, really, the modern workplace and modern study seems to those of us who are old enough to remember the typewriter’s chatty percussion.
The CMAG display brandishes 102 of Messenger’s collected contraptions but this is only a fraction of Messenger’s whole collection.
“About eight or nine years ago I set out to find models of the first two typewriters I ever used [one he was given, as a child, in 1957, and the second he used when he began work as a newspaper journalist in the mid-1960s]. Well, I did discover those models on eBay but [laughing] I discovered eBay at the same time! Sadly for me those two typewriters very quickly turned into 902, so it’s a fairly vast collection.”
There’s no room at CMAG for the whole attractive treasure trove “But those that will be on display there are pretty much the pick of them.” Jewels of the displayed 102 include Miles Franklin’s very own typewriter (not just the model she used, but an actual one whose keys her famous fingers hammered and caressed) and of course a divine Blickensderfer.
“Miles Franklin’s own typewriter is a typewriter I rescued from New York. It only cost me $37. When it arrived here, how I came upon the Miles Franklin connection is that I discovered it was sold in Pitt Street in Sydney in the early 1920s. I put my thinking cap on and wondered who could have bought a typewriter in Pitt Street, Sydney, and taken it to New York? Miles Franklin’s name popped into my head. I went down to the National Library and they very kindly dug out original typewritten manuscripts by Franklin and these were then taken to forensic scientists and compared with pieces I’d typed on that typewriter. And we found a perfect match. So that was a real needle in a haystack thing. The way that a typeslug will hit a piece of paper [on a platen] … leaves a distinct fingerprint. So you can match them and many famous criminal cases have come down to this [for example by enabling the tracing of typed ransom notes] so, yes, people have gone to the gallows for using a particular typewriter!”
Messenger is sure visitors to the exhibition will become Blickensderfer besotted.
“The Blickensderfer was never really sold in big numbers in Australia … so not a lot of Australians will ever have seen a Blickensderfer. It is an astonishing typewriter. It was first made in 1893. I’ve always argued that the Blickensderfer was so far ahead of its time in 1893, with the development of manual typewriters ending in about 1983, that time never actually caught up with the Blickensderfer. It is a brilliant machine. For example it even has a little ink pad at the back. It doesn’t have a ribbon. The ink is still in there. Any of the printers you may have today attached to your computer, they’re not going to last 117 years, I’ll guarantee. But this one still works.”
See the astonishing and brilliant Blickensderfer No 5, and much, much more  at the From A to Z: Robert Messenger’s Typewriters exhibition at the Canberra Museum and Gallery. The exhibition continues until September 16.
Posted by Robert Messenger at 10:11

Great comment with the video (shift lock!), and the Miles Franklin story is truly amazing!

Great publicity! I am not a journalist, but seeing my name and typewriters all over the newspaper would make me one happy duckling. Hell, I was a bit giddy when you mentioned my comment the other day.
Congrats, and I wish you all of the best success possible. I cannot wait to hear how it turned out.

Great articles and nice work on the video. Now I know why it is a shift.

Best of success with the exhibition.

I enjoyed the discussion about functional aesthetics. Typewriters are distilled bits of human/machine interface. Almost every bit ends up being touched in the process of using or moving the machine. Smart designers melded the functional technology with great HMI. Users rewarded them by purchasing machines with the best look and feel.

Objects like the iPad of today will be remembered fondly for their HMI and user experience, but I doubt they will still be functional in 30 years given shifting communications protocols and designed obsolescence in the battery department.

We watched "All the President's Men" again, recently. This was a good reminder of the sound and feel of the pre-PC era.

Happy to know that the exhibit is getting the media coverage it deserves. It's exciting to see the photos finding their way to print.

Robert, I posted the exhibit info on my "Typewriter News" section at the right box of my blog. I also posted one of your pictures (if that's okay) and linked back to your blog. Cheers.