To the best of my knowledge, typewriter buyers on Australian eBay have yet to be subjected to scams comparable to two which have been tried in the US this year. These two stings involved typewriters valued up around $15,000, which of course we don't see in this country. 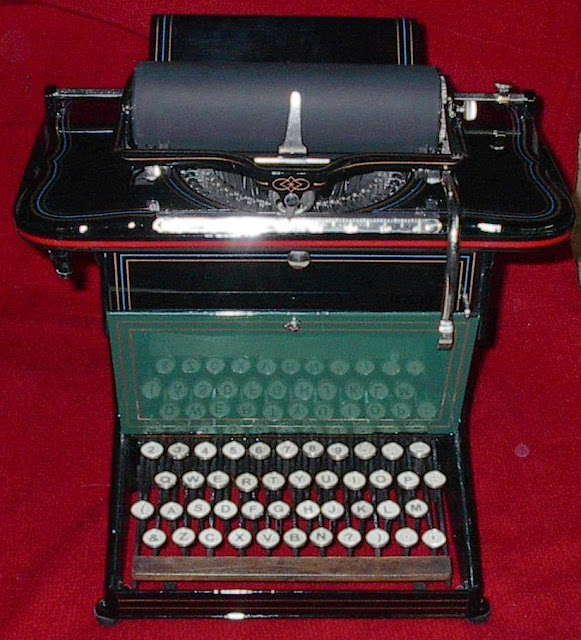 Just last month a seller called "odellbrendan", in Rigby, Idaho, with no feedback, tried to sell a restored Sholes & Glidden. The starting price was $9 and within days 16 bidders had pushed the auction up over $900. The fake sale was reported to eBay, which appears, for once, to have acted responsibly. The auction seems to have been ended without a sale, happily for all concerned. But apparently the seller then contacted people who had inquired about the item, offering the machine at various prices. 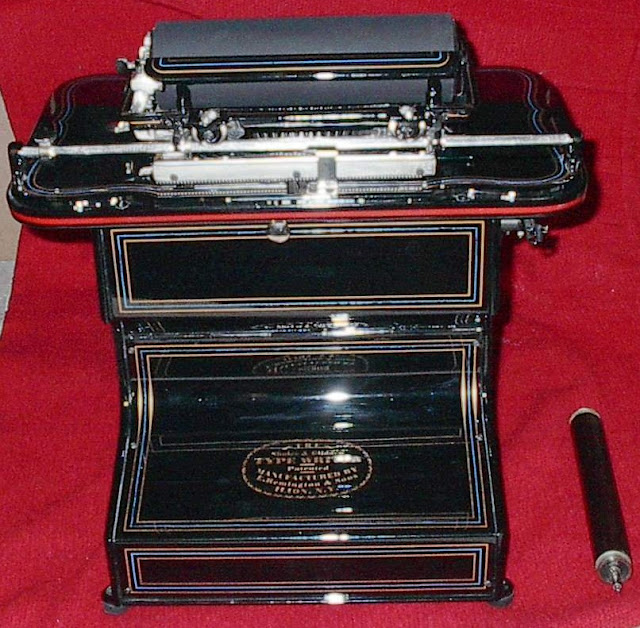 The actual restored Sholes & Glidden had been offered by an experienced eBayer and sold for $14,900 after 25 bids back in January. It had been completely restored in Germany by Hermann Kerz for Bill Kortsch. It's serial number was 3852. In the fake attempted sale, the same images were used, with the same backdrop. 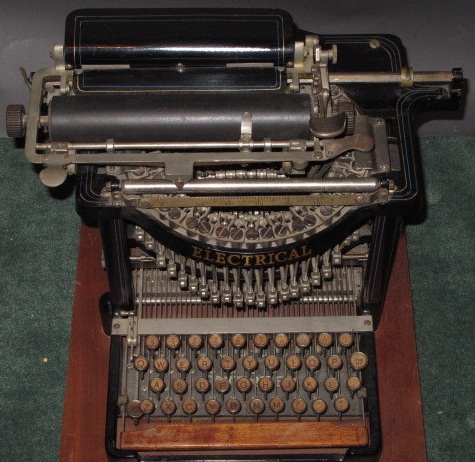 Last May a seller called "aspegrest", in Maryland, tried to sell an extremely rare Cahill Electrical. This "sold" for $218 after 29 bids. Trouble is, the real Cahill had sold for $15,160, after 20 bids, just a month earlier. Somehow, different images were used, and the Cahill was listed as an Underwood No 2, though it was clearly decaled an Electrical. The images carefully cropped out a presentation plaque at the front of the machine, but the spacebar was a dead giveaway (see the identical mark, left). This beautiful machine had been presented to a member of the Cahill family by IBM Communications in March 1976. 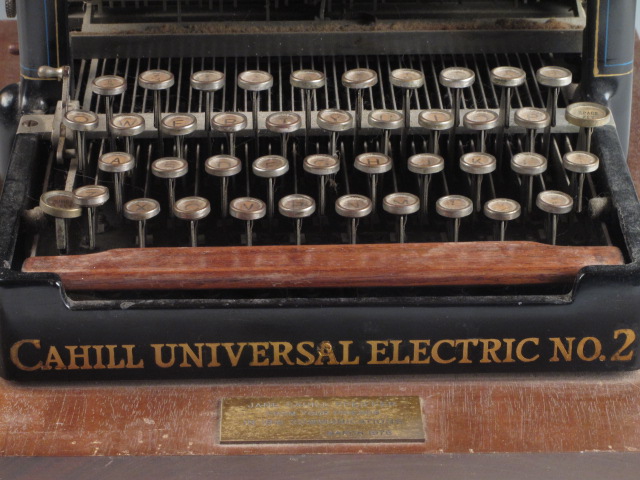 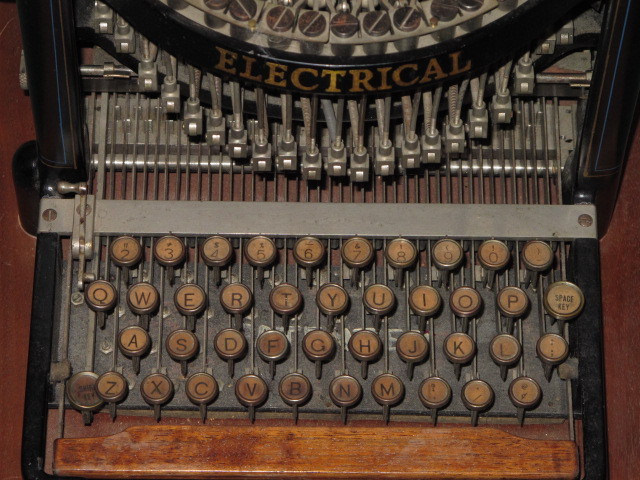 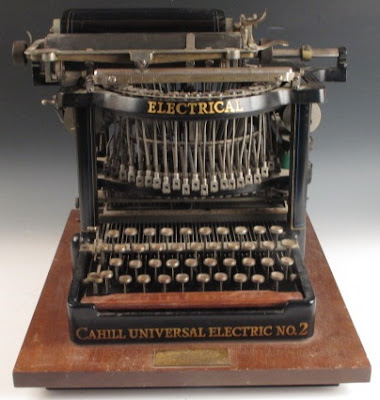 We seem to have been spared this sort of thing in Australia, most likely because we simply do not have typewriters of this class being listed here. Nonetheless, Australian buyers could easily have been suckered in by the US listings, if it hadn't been for welcome alerts issued to members of the Early Typewriter Collectors' Association.
They are nowhere near being in the same price category, but I still find some trends with typewriter sales on Australia eBay a little disquieting. 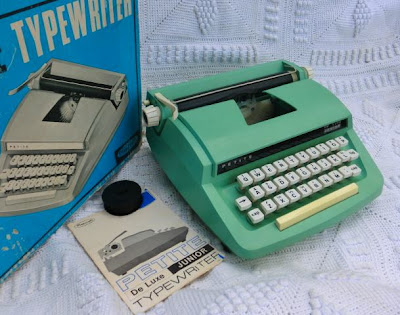 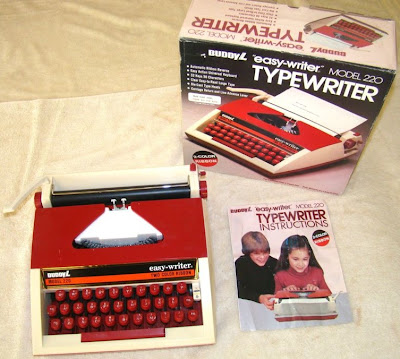 For example, two toy typewriters listed last month failed, in my humble opinion, to properly identify the items as toys, and could easily have been mistaken by potential buyers for real typewriters. As it turned out, one sold for $61 and the other for $51, which might indeed be prices people are prepared to pay for toys as collectibles. Since both toys are very readily available on eBay, however, the prices seemed to me to be a bit inflated. 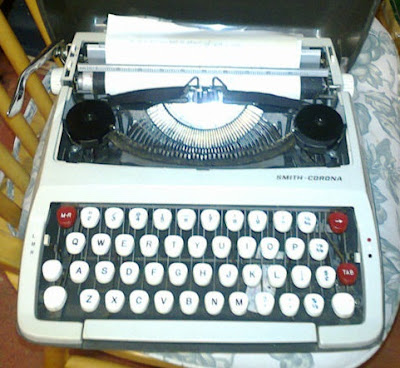 Another trend which has returned in force is that of selling topless typewriters - machines which are missing the ribbon spool cover - and rarely pointing this out in the listing description. One seller did admit, "Also i [sic] think it once had a cover over the middle." 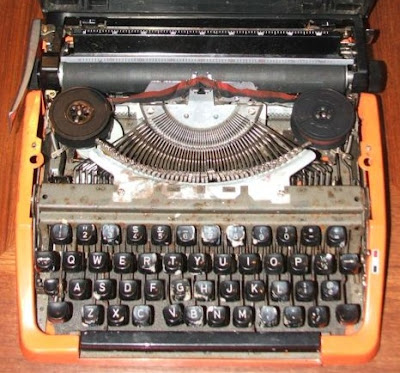 This nondescript Brother typewriter was described as a "Fantastic Machine. Excellent craftsmanship. Even thought [sic] the print is still very readable, if you changed the ribbon to a new one, it would be as if you had just taken this home NEW from the shop and out of the box!!" New? Have a look at the twisted keys. And "new" without a ribbon cover? I think not. Quite rightly, it sold at the starting price of 99c. 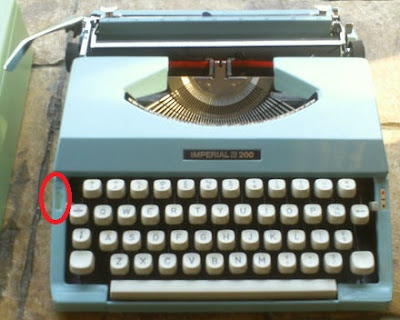 I noted that this Silver-Seiko Imperial 200 was listed as "brand new", though the case, as is the wont of these machines, had faded to a greenish shade. "IT SEEMS TO WORK, BUT THEN DOES STICK ABOUT 1/2 WAY ALONG - MAY NEED AN ADJUSTMENT??? IT CARRIES ON WHEN YOU LIFT THE ROLLER A LITTLE." The touch control panel is also missing. It sold for $61. 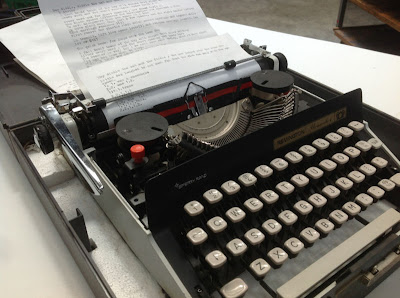 Someone is asking $250 for this Remington Monarch, and a buyer paid $100 for this Olivetti Lettera 32, even with an exorbitant $42 added on for postage. 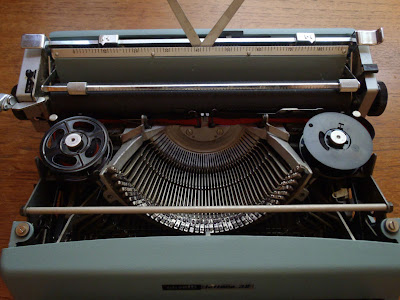 I went to the trouble of contacting the seller of this Underwood Universal, suggesting she might like to photograph it the right way up in its case. It worried me that she might pack it this way, and thus cause damage to the top of the typewriter. The seller thanked me, but ignored my advice. The machine still sold for $81. 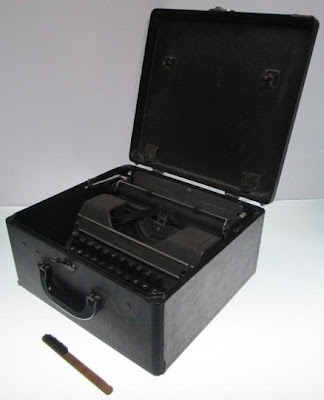 A Sun No 2 sold for $455, but the Vari-Typer I mentioned in my last dispatch only attracted one bid at $30. Also, the Alpina "made in Germany by Will Davis and Norbert Schwarz" got two bids and went for $56. 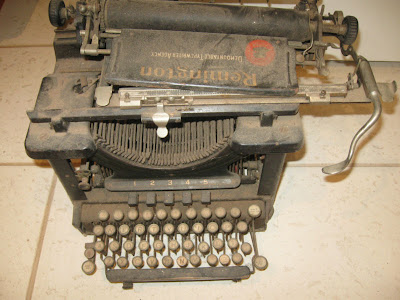 Two efforts were made to sell this Remington at $100. "Photograph does NOT do justice," the seller said. Hopefully - presumably - that was an understatement. "Here is your chance to pick up a beauty at a bargain price!"
There comes a point at which one has to wonder how much effort a seller is prepared to go to convince a buyer to fork over $100 of their hard-earned cash.

A seller wants $99 for this "Old typewriter from dads [sic] shed looks old dont knowmuch about it it is has TABULATER printed on it".
Here is the image. I guess one image is better than none, which is another recurring trend. But that's it! A blurry postage stamp. See you later, Tabulator!

Posted by Robert Messenger at 09:39

I actually had a typewriter that was shipped to me in its case the wrong way up. The finish was completely chipped from being "stabbed" by its own case throughout its journey. It was heartbreaking. We don't get a lot of typewriters on eBay Singapore, but here's one badly corroded Remington Rand with a buy-it-now price of S$400. There's a similar one in much better condition on eBay USA with starting bid USD40. Oh well, I suppose it *is* rare locally, but the condition is pretty appalling at that price. http://www.ebay.com.sg/itm/Vintage-REMINGTON-RAND-Typewriter-Broken-Not-Working-Old-but-Nice-/350657951473?pt=LH_DefaultDomain_216&hash=item51a4d7b6f1#ht_1186wt_1082

Yuck! I see what you mean, Caroline. "Broken, Not Working! Old but Nice!" Broken, not working and NOT nice!

Worst I had from Epay was a 1940s something Royal (Companion I think. It is at the bottom of my to be repaired pile) that was listed as a near mint working typewriter, but the latch on the case does not work. Well, it arrived out of the case because it was packed wrong. The machine looked fine, but it has a split platen and faulty escapement. I got my money back including the shipping and got to keep the machine.

The last one I bought on Epay was my J5 guaranteed to be shipped correctly as per my email. It arrived wrapped in plastic wrap, no box, no packing of any kind. Buyer got scathing negative feedback. The machine did arrive fine and it works great, but as promised in my email: do not pack it as I request and you are guaranteed negative feedback.

Good for you, Bill! Sellers like this get what they deserve!

I bought a topless L32 once for $50 including shipping but it was script and the seller hadn't mentioned it, I just saw it in a photo.

I'm no typewriter valuer by any stretch, but the starting prices for many Australian ebay typewriter auctions shock me. I've purchased two typewriters online from the States recently (one listed on ebay and another on an antiques market place) and had them sent to my father-in-laws. I figure they'll be a nice surprise for me the next time I visit.

I'd be interested in hearing what people suggest are the best ways to pack typewriters for postage.

I also saw this Halda on ebay. It's missing a third of a space bar and some of the keys look twisted. The seller has provided only two photos that show minimal detail, but does assert that it is "[p]erfect for that collector." I wonder who that is?

Ray, re the Halda: "The item may have some signs of cosmetic wear". Love it!

I realize that many Typospherians are successful in acquiring machines from eBay -- including me back in 2001 briefly -- but I avoid this practice these days for the reasons you bring up in your "eBay posts".

Which, by the way, are always amusing when I'm not shuddering in horror.

I stumbled on this today: with the odd seller out there selling the TOPs of typewriters, some optimistic matchmaking may happen for the topless typewriters!
"Top lid to a vintage torpedo typewriter"