On This Day in Typewriter History: Dodson's Tower Typewriter 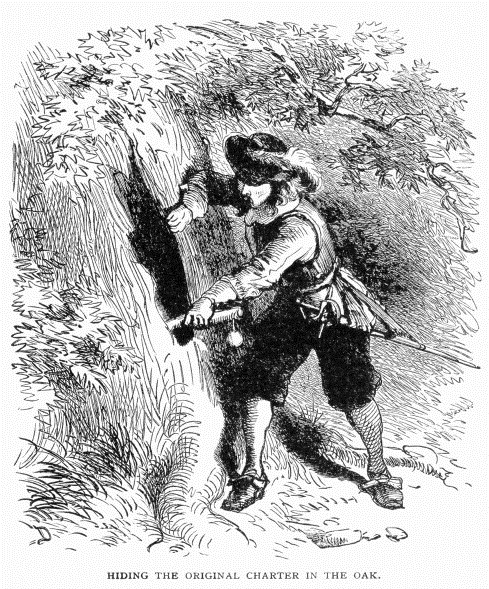 Captain Joseph Wadsworth secrets the
Connecticut charter in Sam Wyllys's oak tree
Pennsylvania mechanical engineer Darien Wadsworth Dodson was a direct descendant of Captain Joseph Wadsworth, the Connecticut "charter oak" patriot who once threatened to “make the sun shine through” a New York royal governor.
One gets a sense that Dodson’s typewriter inventions were also full of holes.  Certainly none of his machines was ever made, and historian Michael Adler declared at least one of them as “impractical”. Although I did perhaps prematurely and unfairly once describe Dodson as “the most persistently unsuccessful typewriter inventor ever”, it nonetheless does appear that he was wasting his own time and that of others. A clue to this sort of indulgence may be found in the fact that one of Dodson’s cousins married John Millard Emery, an examiner at the US Patents Office in Washington.
These designs were, it must be admitted, a very young man’s fancy. Dodson was just 19 when he first applied for a patent and a mere 23 when he applied for his first typewriter patent. 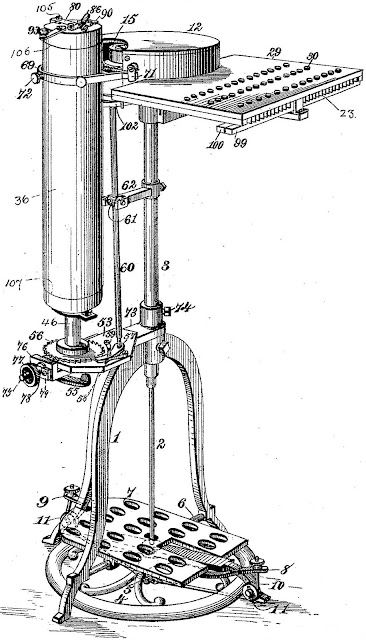 The typewriter patent we are looking at today, issued on this day (December 3) in 1889, is a prime example of Dodson’s often immature and extremist work. If the reader is trying to make head or tail of it, I should quote Dodson’s description: “My improved typewriting machine consists, essentially, of a suitable framework, a revoluble turret, one or more revoluble typewheels mounted on said turret at a distance from its centre, a series of type or wheel starters constructed and arranged to start revolving the said revoluble type or wheels, finger-keys and connections operating said starters, devices suitable for continuing for the proper time the rotation of said type or wheels and for stopping them, a paper-carriage, and carriage-feeding apparatus.”
This patent was a development of one Dodson had been issued with five years earlier. He later moved on to something more conventional – a beast with striking similarities to the 1904 Kanzler. 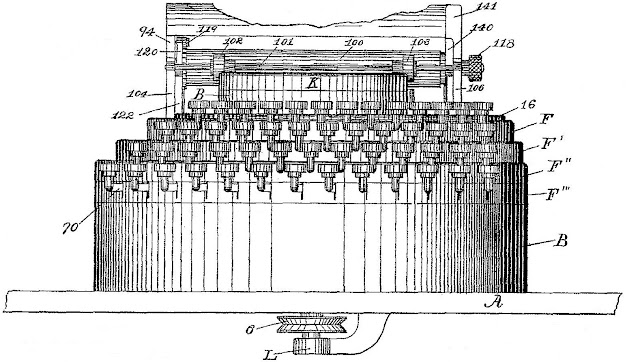 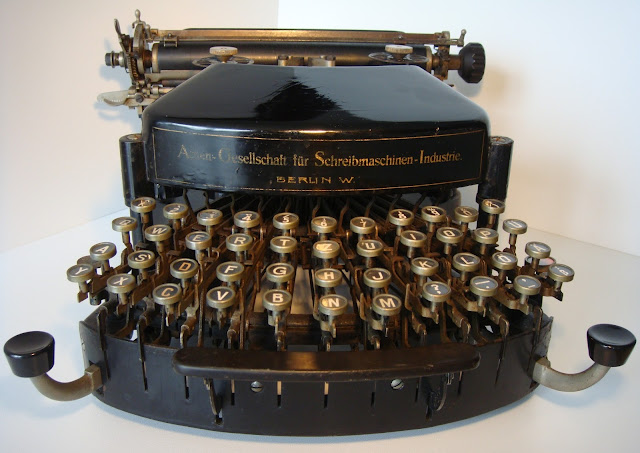 Frank Notten's Kanzler. See.
Dodson said of this 1890 design, “This invention relates to that class of typewriters (recently invented by me) in which the typewheels have independent orbital and axial rotary movements, and in which the mode of printing the character is by rolling the type therefor on the material to be printed, while said typewheel has both of said movements.”
This machine also had a non-QWERTY keyboard:

Darien Wadsworth Dodson was born at Town Line, Pennsylvania, on November 14, 1860. He was part of a family which, through Epaphfras Wadsworth, had moved from Connecticut to Pennsylvania in 1794, to set up a forge and blacksmith's shop in Wilkes-Barre.
After taking a long break from attempts to invent a typewriter, in 1909 Dodson was contracted by the American Type-Bar Machine Company and assigned to this company various of his inventions, for dies, for character bars, and for a machine to form characters. 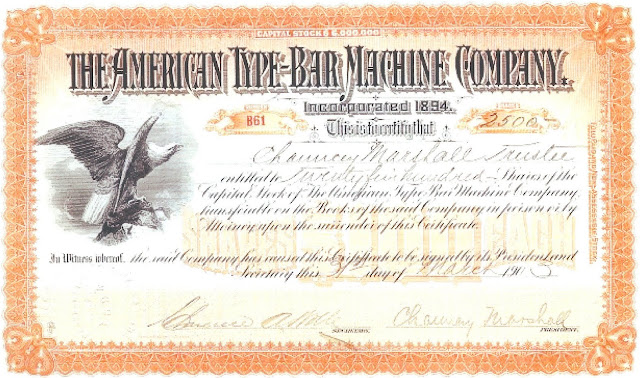 The New York City-based American Type-Bar Machine Company had a charter issued and was incorporated in 1894. Its president was Chauncey Marshall and its objectives were “acquiring and developing certain inventions and improvements pertaining to the art of printing, manufacturing, selling, type-bar machines".
Dodson was still being granted patents in 1923, aged 63, when he was living in Dorranceton, Pennsylvania, and had invented “hydraulic rams”. He died in 1940, aged 79.
I should perhaps explain my reference to Dodson’s relative, the bold Captain Wadsworth. In 1693 William of Orange conferred on New York governor Benjamin Fletcher the power of command over the militia of Connecticut, in direct contravention of the colony’s 1662 charter of government, received from Charles II. Fletcher went to Hartford, on October 26, 1693, armed with a royal commission he wished read to Wadsworth’s militiamen.
Wadsworth drowned out the declaration by ordering his troops to beat their drums, telling Fletcher, “If I am interrupted again I will make the sun shine through you in a minute.” 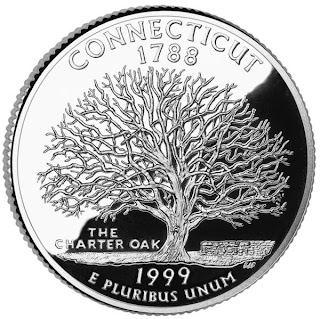 Almost exactly six years earlier the same Captain Wadsworth had gained lasting fame at the expense of another royal governor. On October 31, 1687, New England royal governor Sir Edmond Andrus, appointed by James III, attempted to carry out the king’s instructions to retrieve the Connecticut charter and embrace Connecticut under his control. Wadsworth extinguished the candles at a meeting between Andrus and local officials at the Moses Butler tavern in Hartford, grabbed the charter and hid it in an oak tree at the property of Samuel Wyllys. 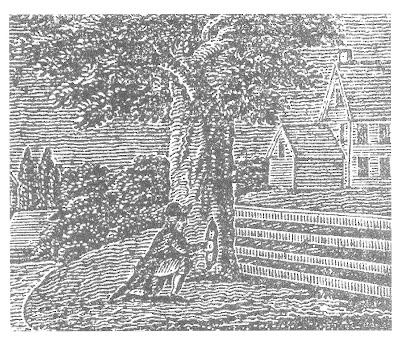 Wadsworth secrets the charter
In 1715 Wadsworth was rewarded for the “charter oak” incident, for “securing the duplicate charter of this Colony in a very troublesome season when our constitution was struck at, and in safely keeping and preserving the same ever since to this day”. This was described as possibly “the first act of civil disobedience against the Crown by the Colonies”. 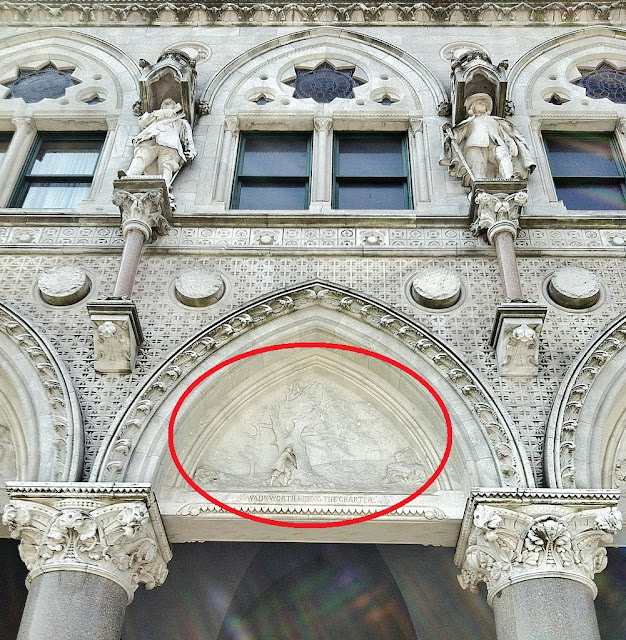 Posted by Robert Messenger at 10:52