Looking for a Little Help From Our Friends: The Underwood Noiseless 77 Portable Typewriter 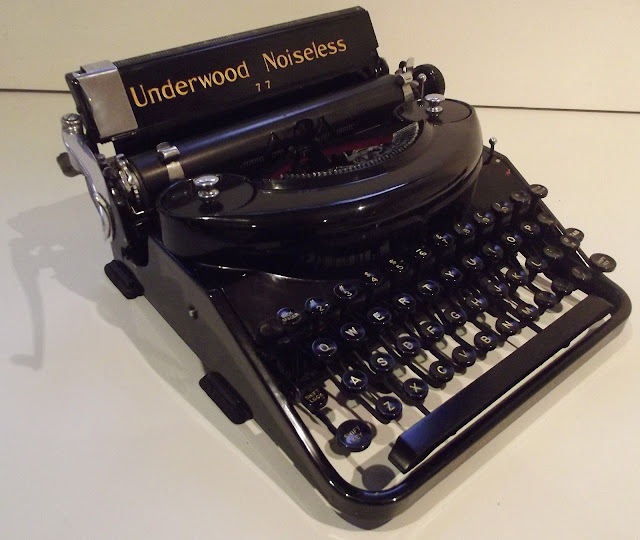 Calling on all Typospherians. We are in Emergency Ward 10 here with an magnificent 1930s Underwood Noiseless 77 portable typewriter, which has suffered a major injury and is showing the after-effects. Any help or advice you can offer would be greatly appreciated. 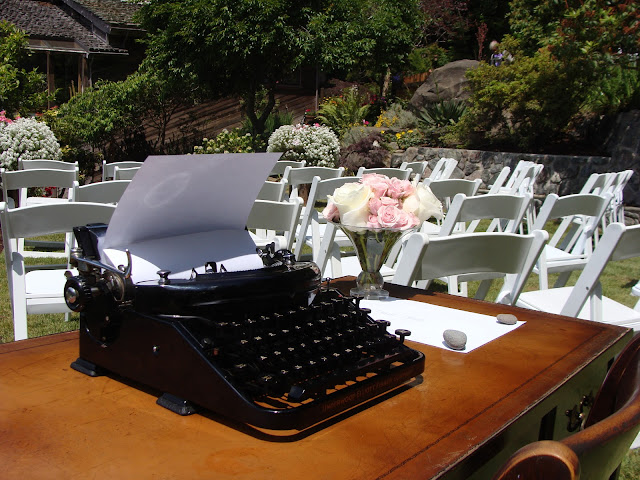 My friend Ray,  a Canberra PhD student, was given this Underwood Noiseless as a wedding gift by his father-in-law when Ray was married in the US. It was in fantastic condition. Ray brought the typewriter back to Australia with him and got considerable use out of it. But then the drawband broke. 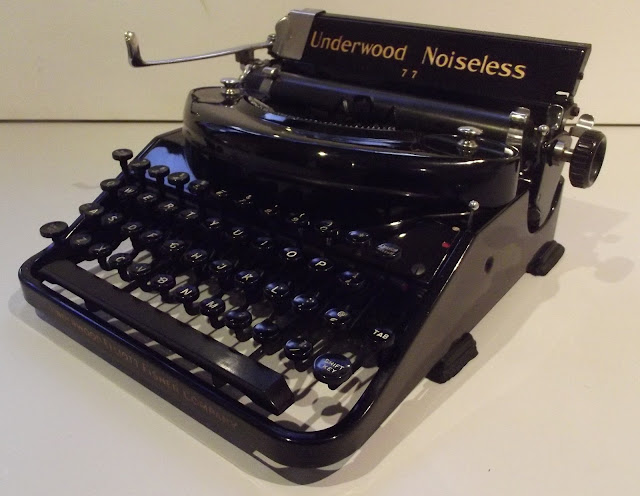 Ray brought the typewriter to me to see if I could fix it, but given the awkward position of the mainspring, I found it was beyond me. I was especially reluctant to tackle the task as the machine was in such good condition, and because it had such great personal significance for Ray, that I feared doing any damage to it. I felt it should go to a specialist. 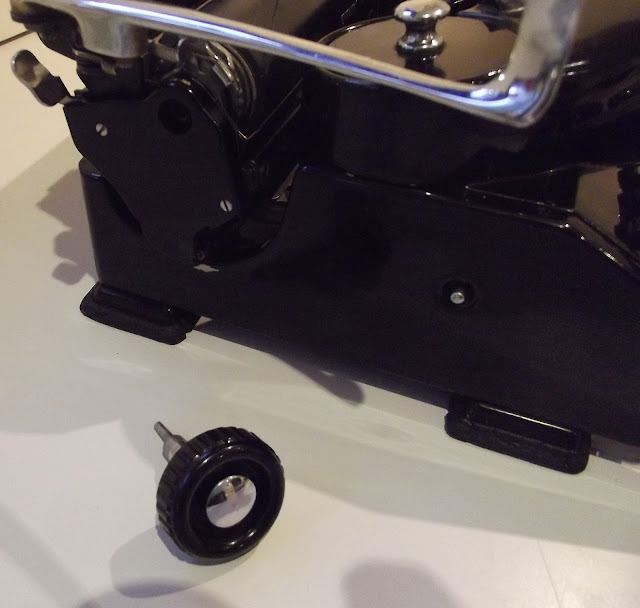 Ray took to it to a specialist. Unfortunately, a serious accident did occur. The platen was badly mangled and the left platen knob broken off. I'm not sure why the platen was put in a lathe in the first place, as it and the carriage movement had seemed fine to me. But such is life ... accidents can and do happen, even with the best will in the world. 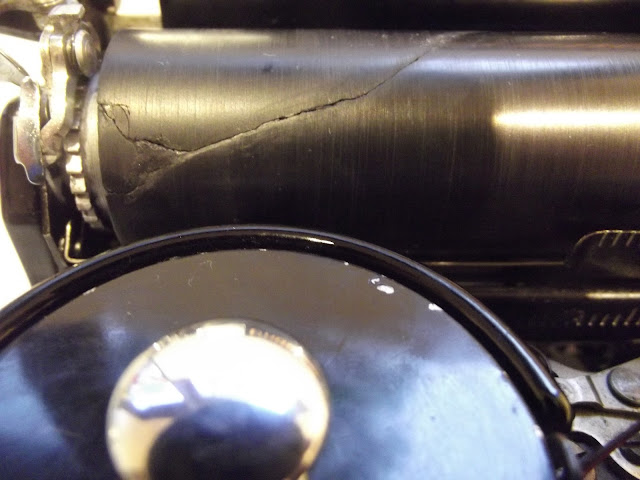 Despite Ray's reassurances to the contrary, I feel at least partially responsible here, having recommended he go to a specialist, a qualified typewriter mechanic. Ray has tried to track down in the US and elsewhere a replacement platen with knob intact, but without success. What has happened to this gorgeous old typer is a tragedy, and anything anyone can offer in the way of help or advice so it can be restored to the way it was when given to Ray as a wedding gift by his father-in-law would make Ray's Christmas just so, so much better. 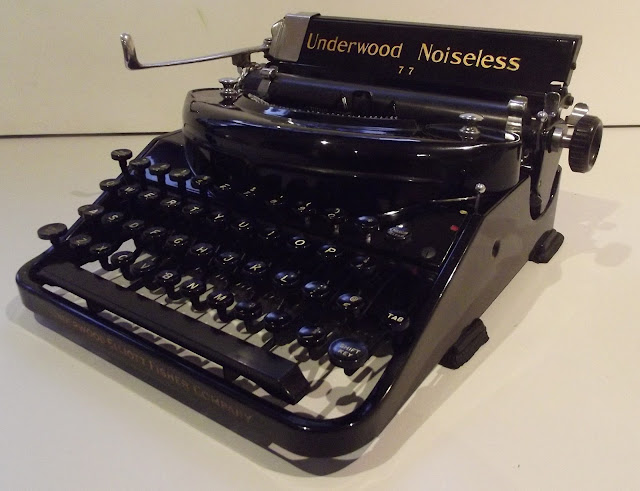 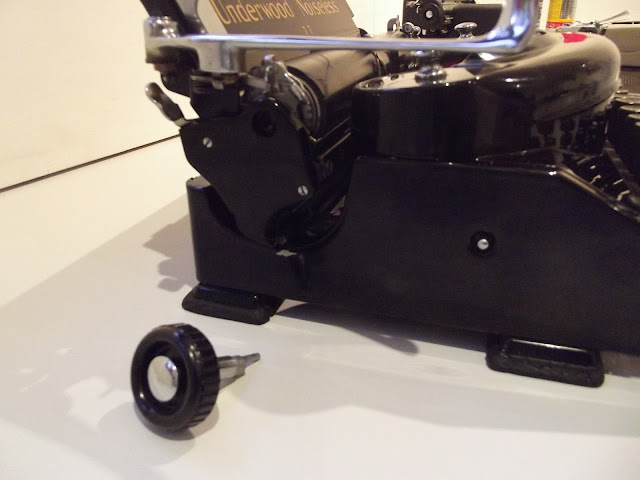 Hey Robert, could you show me a photo of that knob piece turned around? I've had my platen dismantled before, and I just want to see if there's any broken or shaved metal components.

Hi Scott. Ray has taken the Underwood with him, so I can't get any more photos. But I have added one that is the best I can do, almost side-on. Does this help?

Sort of. I'll dismantle my platen later today and compare them. You should be able to pull that button outwards, and release a nut inside to allow it to break down. You may be able to re-assemble it.

I know a couple of repair shops in Mexico, will check with them to see if we can locate some spares. Who knows? We might be lucky.

Oh dear. I have never seen a platen cracked like that before! I must say that in my opinion it's the "specialist's" responsibility to make this right.

The good news is that this is a very common model, when you include the identical Remington noiseless portables in all their minor variations. Finding those particular spare parts would be difficult, but finding a whole machine on eBay? Easy.

Well, the platen can be recovered. But if it has cracked like that, I'm worried that the metal core has been mashed. As well as some components elsewhere being pulped. Richard may be right... This may be the job for a spare parts machine.

Speaking of which... I need some parts myself for a Remington. Maybe if someone has a machine sitting about in a shot state, they'd be willing to sell over to use in AU for Rob and I to cannibalize? Dead machines... of course.

Thank you Scott, Miguel and Richard for your help and suggestions. A spare parts machine would seem to be the go, all right
Richard, couldn't agree with you more on the question of responsibility. Not only was Ray handed back a seriously damaged machine, but he was charged for work done!

does anyone know how to replace a ribbon?