On This Day in Typewriter History: Flesh on Bones and Roe's Recognition 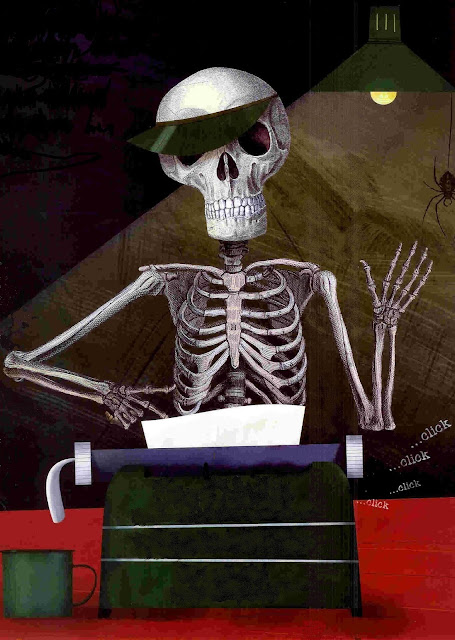 One of the primary objectives of the “On This Day in Typewriter History” series on my blog is, as readers might already have gathered, to try to put a little flesh back on the bones of long-dead typewriter inventors. To pump some new blood into what have hitherto been dry, withered corpses, remembered in little more than passing references.
That is, I’ve set out to bring these typewriter inventors back to life in the sense of providing some insight into who they were,  where they came from, what they did and where they went to (other than, obviously, the grave). Previous typewriter histories have provided ample information about the machines, but very little – other than a name – about the lives of the people responsible for them.
One notable exception, of course, is, as the title suggests, Richard Nelson Current’s The Typewriter and The Men Who Made It, which is a remarkable work, unique in the way in which it provides an insight into the sometimes turbulent lives of Christopher Latham Sholes and James Densmore and their families. Current does this, too, against the backdrop of the times in which they lived. 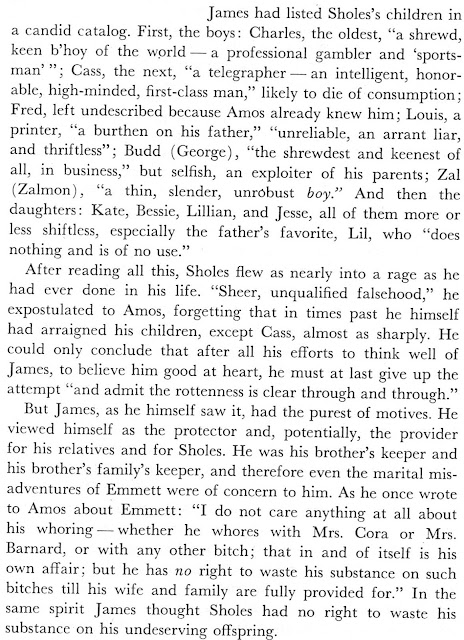 Being given access to the letters of Sholes and the Densmore brothers allowed Current to reveal the highly personal bickering that went on
over the Sholes & Glidden typewriter.
Ernst Martin’s 1949 Die Schreibmaschine is also exceptional in the amount of detail it offers on the people involved in the typewriter industry to that time. It’s such a shame this great work is not readily available in English. 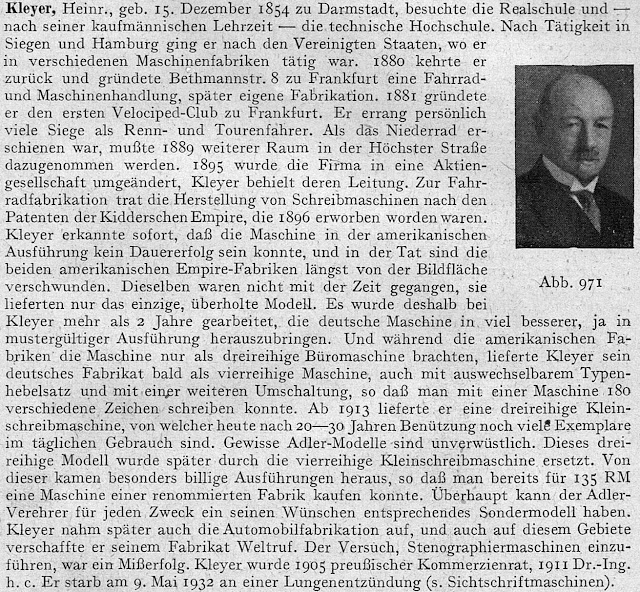 One example of the many pages of individual entries in Martin's book.
For me it’s very encouraging when, for example, Richard Polt responds to my posts with comments about “shedding some more light on this invention and its creator”, or remarks such as “They were very bright people”, or “I get the feeling that Lucien [Crandall] was quite the dandy”. I like to think these indicate that I am making some tiny inroads in my endeavours.
At the back of my mind has always been the hope that through this blog I can make contact with descendants of some of the early typewriter pioneers. My interest in typewriters has already led to me exchanging correspondence with, for instance,  a distant relative of Sholes who lives in California, with the family of George Ed Smith and with the daughter of Victor Ricketts, all of which has been most uplifting. 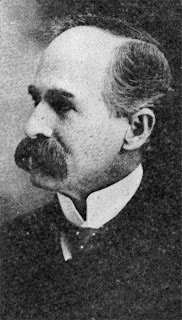 Kaley
One very high point came yesterday when I received an email from Kaley Birch, the great-great granddaughter of John Andrew Kaley, the inventor of an 1883 typewriter who I profiled in this series back in September. Kaley wrote, “I always wanted to learn about my namesake and so my dad and I simply Googled him a couple nights ago, just to see what we could find out about the Reverend Kaley. We were so surprised and delighted to find your website! I just wanted to write and tell you how much we appreciated this article and how wonderful it was to learn so much about him. The pictures and the short biography of his life are fascinating and we had never seen them before! Even my dad had no idea about his life, and with my grandfather having recently passed, it is the most we will be able to learn about him. Thank you so much for your blog.”
A letter like that makes completely worthwhile the many, many hours spent each week researching and writing these posts. As I read back issues of ETCetera, I often feel envy for Darryl Rehr for having been able to make contact with, say, the son of Otto Petermann, and members of the families of other typewriter pioneers.  With such emails as the one from Kaley Birch, I get some inkling of what that feels like. 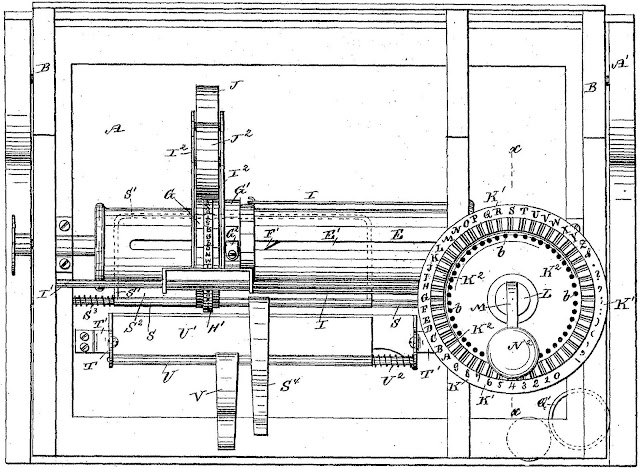 Edward Reynolds Roe's 1884 typewriter
An example of the point I am trying to make here is Edward Reynolds Roe, who on this day (December 6) in 1884 applied for a patent for a fairly mundane index, typewheel typewriter. Roe gets a mention in Michael Adler’s Antique Typewriters. This is it: “ROE: 1885 type wheel patent granted to E.R.Roe of Illinois”. That’s it. OK, Adler had many hundreds of such people to cover, even those, in fairness to the historian, whose inventions never went into production. 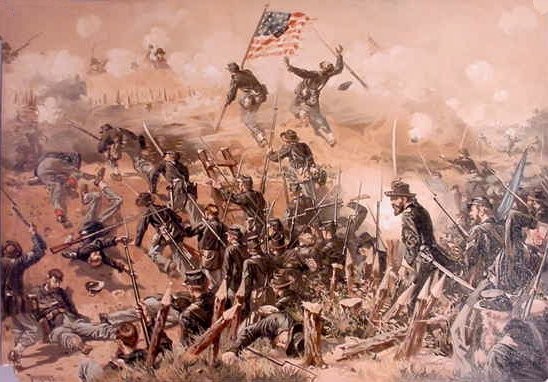 Siege of Vicksburg
But in Roe we are talking about a medical doctor, a newspaper owner and editor, a university professor who was wounded in the Siege of Vicksburg in the American Civil War and became a US marshal and was the father of a US assistant district attorney. He was also the author of many books. Admittedly, his success as an author had much to with him being confused with the noted novelist Edward Payson Roe (1838-1888), of whom it was said E.R.Roe was a “tolerable imitation”. E.P.Roe wrote that E.R.Roe stuck to him “closer than a brother”, which wasn’t meant as a compliment. “A certain ‘Edward R. Roe’ is also an author,” wrote E.P.Roe, “and is suffering cruelly in reputation because his publishers so manage that he is identified with me. By strange coincidence, they hit upon a cover for his book which is almost a facsimile” of one of E.P.Roe’s works. 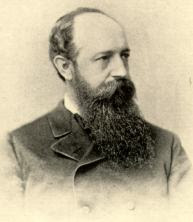 Edward Payson Roe
Still, Richard Polt commented following my post on Alexander Davidson last week that he was impressed “by how many of these typewriter inventors also published books on various subjects. They were bright people.” I agree, and feel Roe deserves more than one line in a typewriter history.
Edward Reynolds Roe was born in Lebanon, Ohio, on June 22, 1813. He moved to Illinois in 1841 and from 1843 was a physician in Shawneetown for nine years before moving to Jacksonville to establish the daily Jacksonville Journal and edit the Bloomington Pantagraph for four years. Roe then became a professor of natural sciences at the Illinois State Normal University in Bloomington (established 1857, now the Illinois State University). 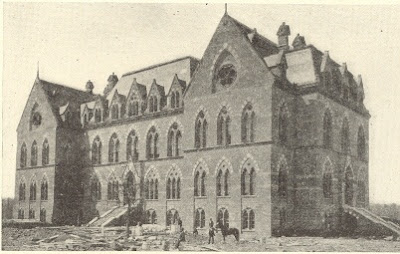 At the outbreak of the Civil War in 1861 he was made a major and lieutenant-colonel in the 33rd Illinois (Normal) Regiment, but was wounded at the Siege of Vicksburg in 1863. After the war, in 1865, Roe was the circuit court clerk in McLean County for five years, and was appointed the United States Marshal of the Southern District of Illinois in 1872, a position he held two terms, eight years. He then became a pharmacist in Bloomington. Roe died on November 6, 1893, aged 80, in Chicago, where he was living with his daughter. 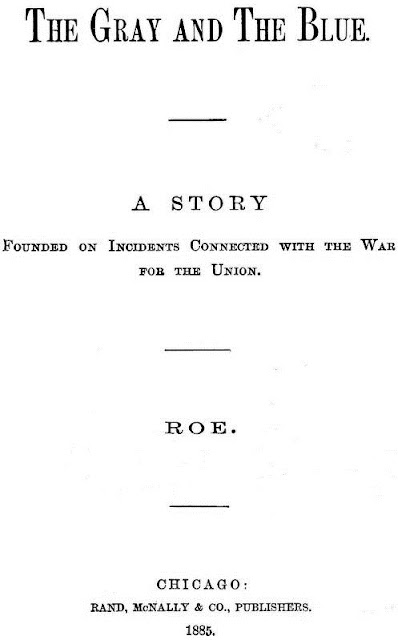 Roe’s books included, notably, Brought to Bay (1882), The Gray and the Blue: A Story Founded on Incidents Connected with the War for the Union (1884), From the Beaten Path and May and Juen: A Romance of the Revolution and G.A.R. or How She Married His Double (all in 1888), Dr Caldwell or The Trail of the Serpent and A Remarkable Case (both 1889) (Dr Caldwell was later republished, in 1909, as Rum and Ruin, The Story of Dr Caldwell), Belteshazzar: A Romance of Babylon (1890), Virginia Rose and Autobiography, Etc (both 1892). 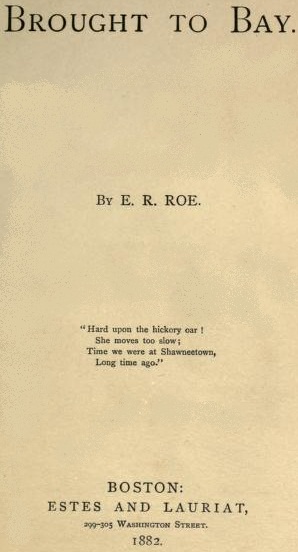 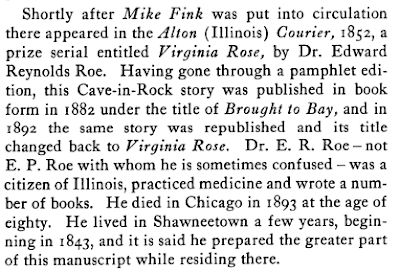 Posted by Robert Messenger at 12:16