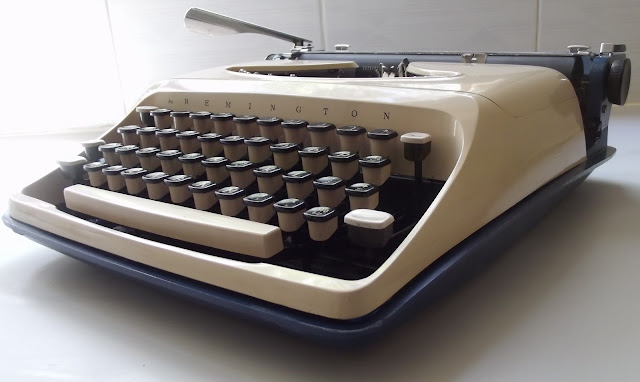 Some weeks ago I had a visit from a young teenager who wanted to look at some typewriters. Unfortunately he was a bit like a bull in China shop. He kept snatching at typewriters and eventually, before I could stop him, he grabbed one on which the case was a bit dicky and the machine fell four feet to the hard kitchen floor. 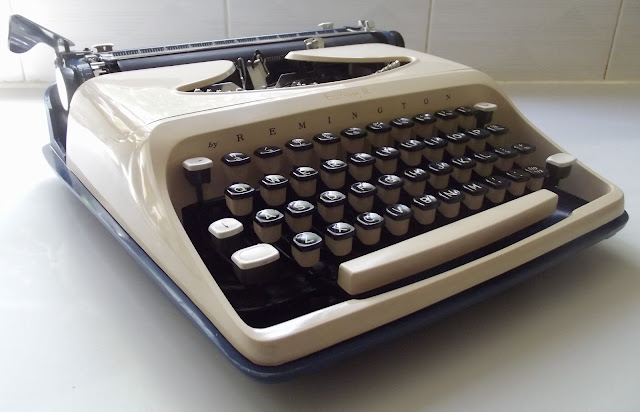 It was one of those early 1960s Dutch-made plastic Remingtons, a fawn-coloured Envoy II, so I didn't think of it as all that costly an accident. Indeed, I'd have been content with a five-letter word starting with S and ending in Y, if one had been forthcoming, which it wasn't. C'est le vie, as Edouard Kelly said on the gallows. 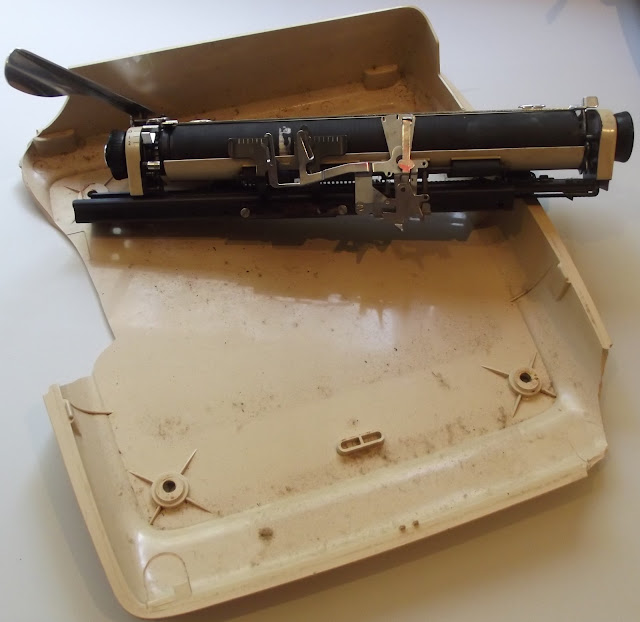 The damage was pretty much confined to the base plate and thinking I could at least partially cover my losses, I went hunting in the shed today to see if there was anything there that I could "mix and match" with the Envoy II, in order to make one whole, working, presentable, sellable machine.

There was, a dark blue and off-white Envoy III which I thought would look an awful lot better in a different colour combination. Fawn and blue, I imagined, had to be an improvement on fawn and fawn or blue and off-white. Anyway, I much prefer the rounded edges of the II to the III's more angular top section. 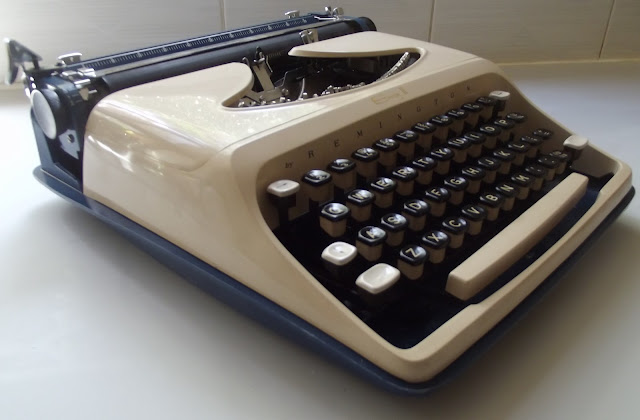 The blue base plate fitted the Envoy II perfectly and I then decided to switch carriages, to give the hybrid machine more blue and because the Envoy II's carriage looked a little bit shabby. That worked well. But I started switching some of the off-white keytops from the Envoy III with the Envoy II hybrid's black keytops. 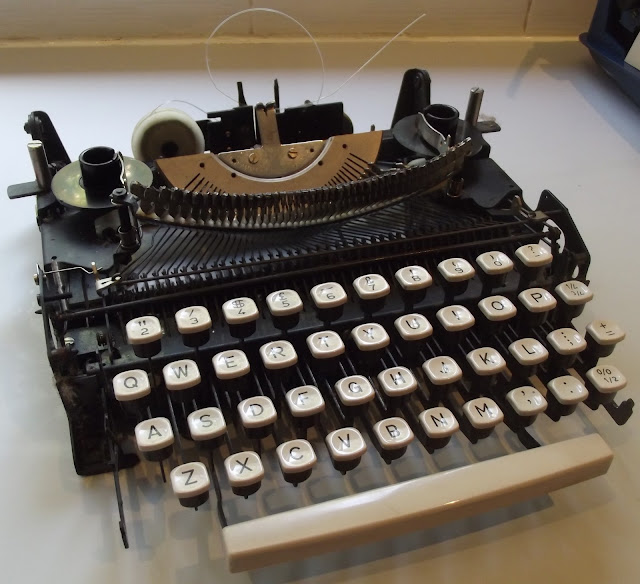 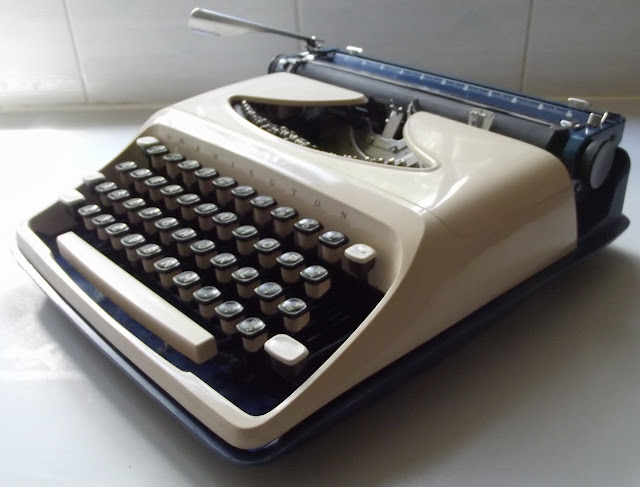 If that works, I'll probably list it. After all, a puce Remington Riviera has reached $290 on eBay and mine has the very same mechanics. In fact, I think it now looks better as a two-coloured "Envoy V" hybrid than either a II or a III (or a Riviera), and I'm surprised Carl W. Sundberg (designer of the Envoys II and III) didn't think of it himself. 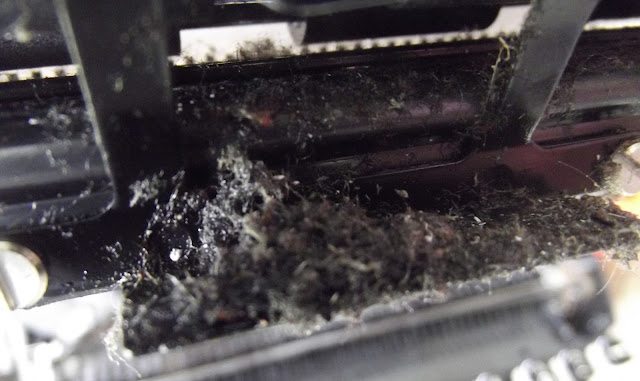 In a way, I suppose I should be thanking my smashing young friend. For one thing, taking the typewriters apart, especially removing both carriages, gave me the chance to thoroughly clean up all the moving parts. Take a look at the pile up of crap that had got in under the segment of the Envoy III. 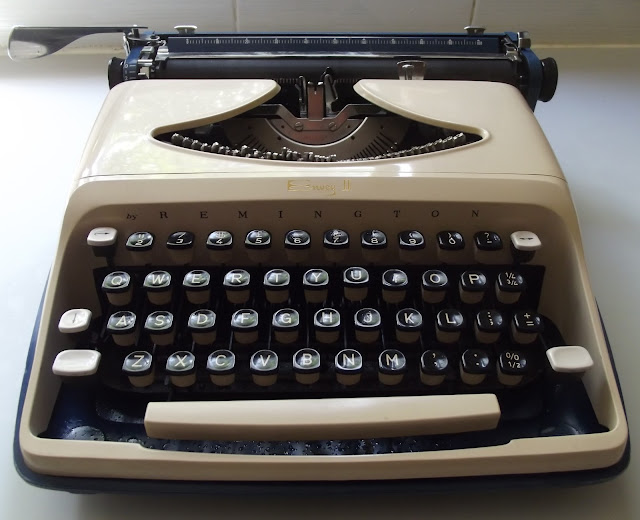 Posted by Robert Messenger at 16:45

The fawn and blue really is an improvement, I have to agree on that one.
Now is the time for selling plastic typewriters! Did you see the electric Olympia that went for $600-odd on eBay?

That's an interesting combination of machines. How's the typing feel?

What? Jasper? What electric Olympia! Far out!!

Scott, this one here

You know, I haven't paid real attention to these plastic Remington Envoys before. Are they good typers?

Not really, Richard, no. I find there is a "looseness" in the keyboard, the keys seem to wobble. I noticed in switching keytops just how thin and pliable the connections are. Things seem to jump about a lot, unlike the Remtor, which was as steady as a rock.
Scott asked the same question: When I switch carriages again, I will test type and typecast.

I just got my first ever typewriter. It's a Remmington Envoy. Unfortunately when I received it, it was in bad condition due to bad packaging. This was especially so with the carriage which was not in place. I managed to slide it back in but in the process some of the bearing balls came off. I am now trying to remove the carriage again to put back the bearing balls but I cannot find a way. I've been trying all day. No info online.

Could you please advise?