On This Day in Typewriter History: The Roberts Pneumatic Automatic Operator

PART  203
Quite a bit has been posted on this blog about Lyman Resolved Roberts, inventor of the Blick Ninety, which became the Roberts Ninety after Roberts’ death. But most of this has been in relation to the Blick Ninety.  I was surprised, therefore, while browsing through the January 1922 issue of Typewriter Topics, to find that in a short death notice, the journal concentrated mainly on Roberts’ Automatic. 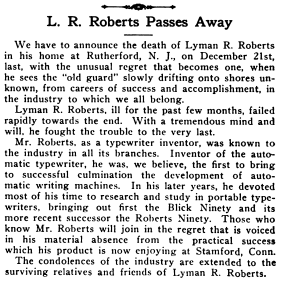 Admittedly, the same issue devoted much space to Chauncey Loomis Allen’s takeover of the “old” Blickensderfer company and his launch of the Roberts Ninety after Roberts’ sudden death at his home in Rutherford, New Jersey, on December 21, 1921. 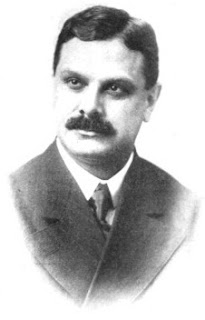 Chauncey Loomis Allen
I hadn’t previously given much thought to Roberts’ Automatic Operator, for which Roberts was first issued with a patent on this day (December 13) in 1910. An improved design (below) was patented in 1916. My understanding is that at the time the second patent was issued, Roberts was working with Underwood on this project, sometimes in collaboration with Charles Leonard Davis. 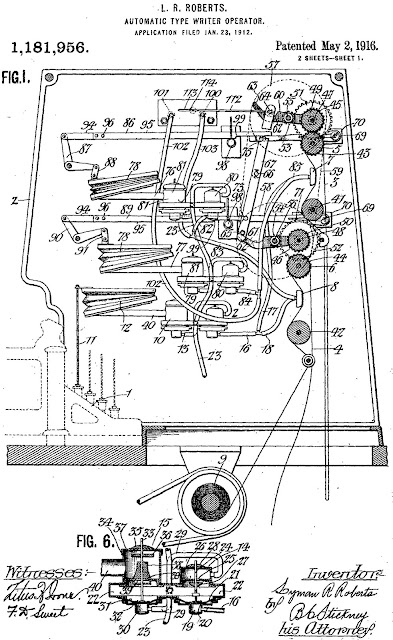 In his 1912 patent application, Roberts wrote, “An object of this invention is to increase the ease, facility and positiveness of control both manually and automatically, whereby in the operation of repeating a letter with an automatic operator for a typewriter, the shift can be made from the writing of the body of the letter to the writing of the insert, such as the name and address, and vice versa, with greater rapidity, nicety and certainty. The embodiment used to illustrate this invention is of the pneumatic type in which pneumatic actuators operate certain parts necessary for the complete operation of a typewriter, such as hammers to strike the keys of a typewriter according to a predetermined sequence. The pneumatic actuators are controlled from a plurality of trackers or tracker boards, only one of which, however, is to be in action at a time.”
Posted by Robert Messenger at 08:13