Salute to the Corona 3 Portable Typewriter on its 100th Anniversary: Part V and Last

CORONA 3 RECOGNISES
ITS BIRTHRIGHT
When, in Newark in 1902, Franklin Sebastian Rose conceived the idea for his wonderful little aluminium folding portable typewriter, he doubtless would have dreamed of it one day enjoying enormous commercial success. Little could he have imagined, however, what the next 15 years would bring for the machine that was to begin tentative life as the Rose Typewriter, and would first see the light of day in 1907 as the "Standard Folding Type-Bar Visible Writing Typewriter".
Frank Rose, who was all for compactness, would have hated such a needlessly long brand name. But he had no control over what Marshman Williams Hazen called the machine. Rose died on May 23, 1905, leaving his widow Catherine Marcley Rose and 26-year-old son  George Francis Rose with the task of making his dream a reality. George Rose secured the backing of Hazen and the folding portable went into production in a small loft factory at 2234 8th Avenue, Upper Manhattan. In June 1908 the Rose Typewriter Company moved to a larger loft factory, at 447 West 26th Street.
Happily, in 1917, the Corona Typewriter Company of Groton marked the five years since the advent of the Corona 3 by acknowledging this beginning of 10 years earlier: 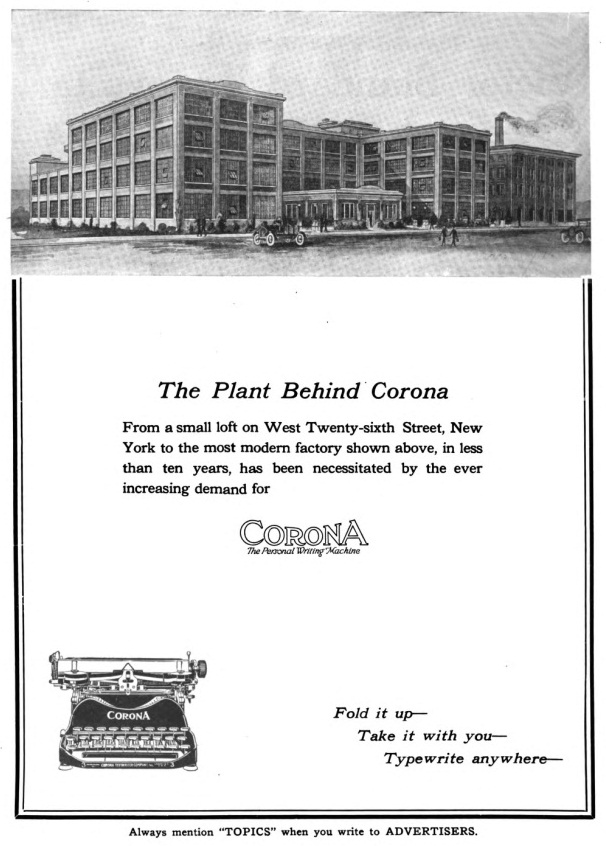 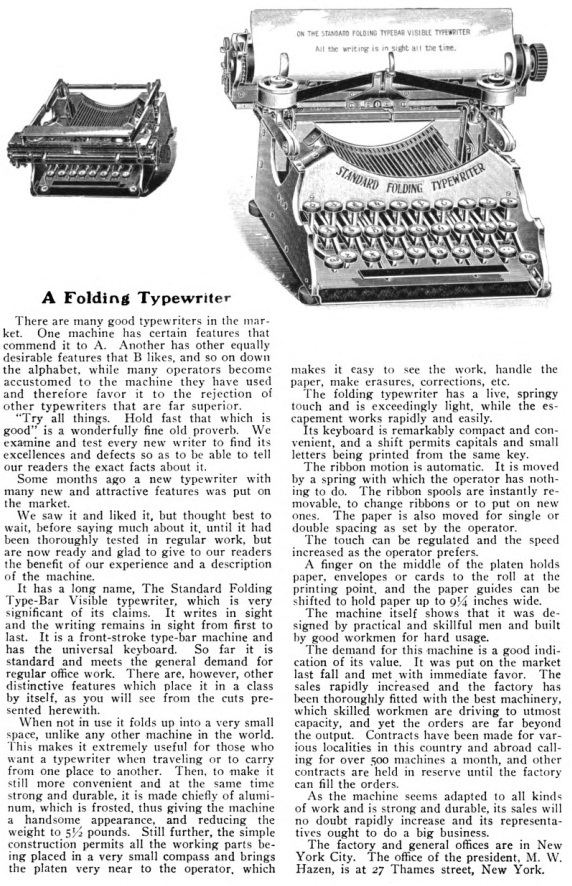 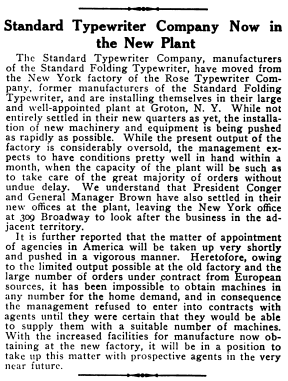 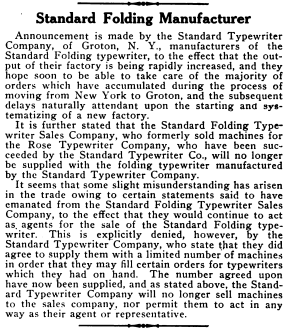 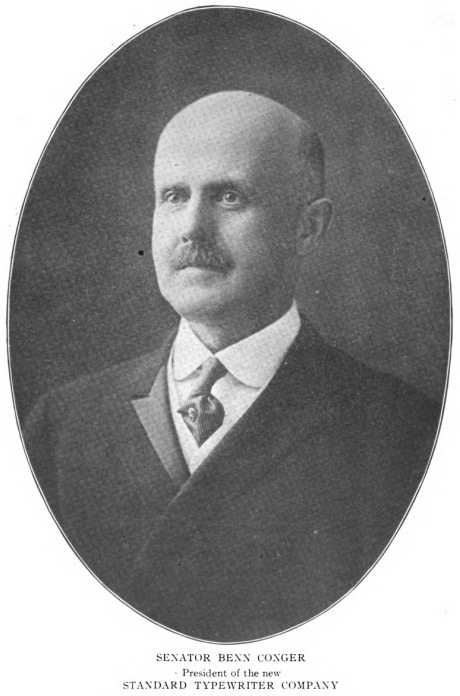 In 1910 Typewriter Topics devoted three pages to the Groton factory as part of its on-going full coverage of events regarding the Standard Typewriter Company: 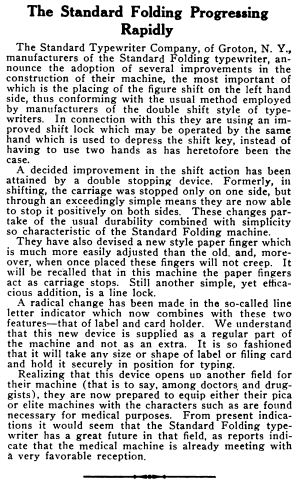 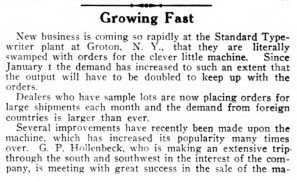 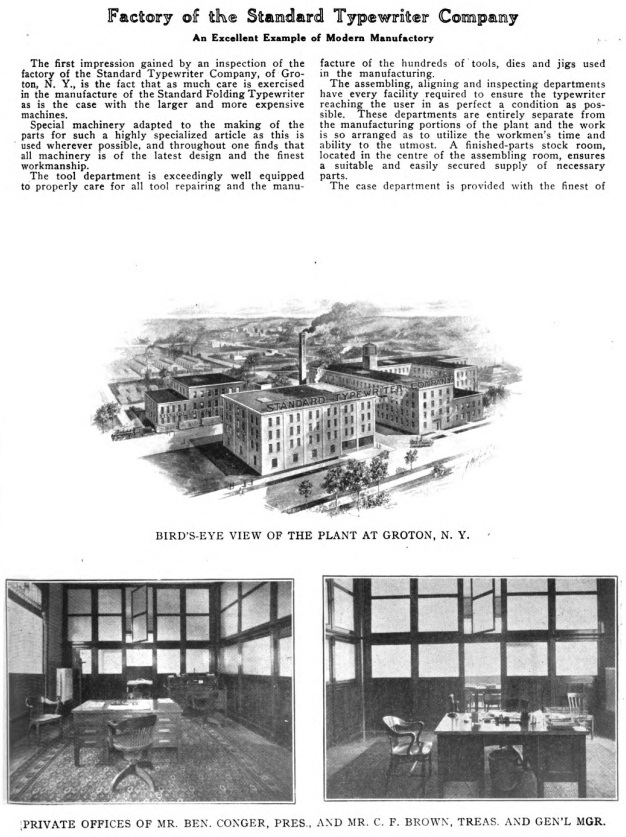 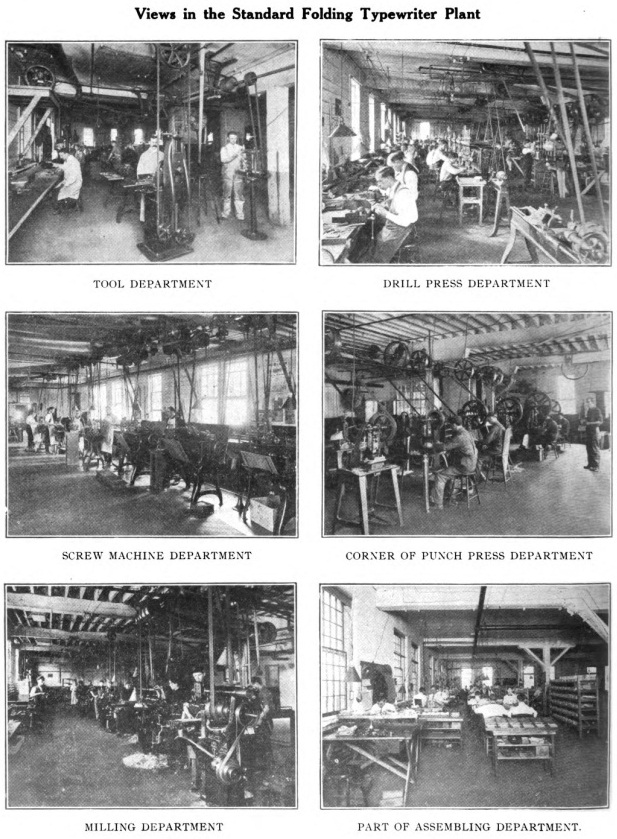 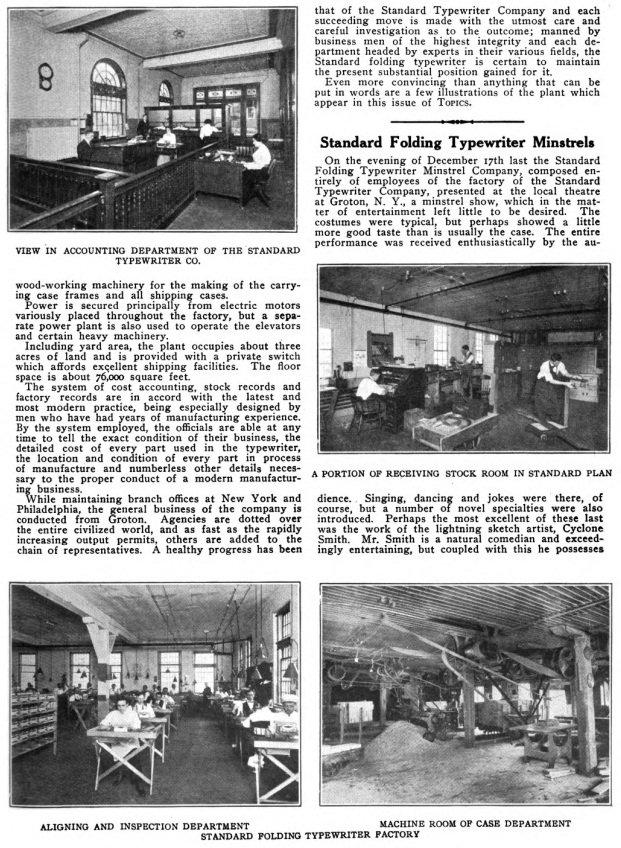 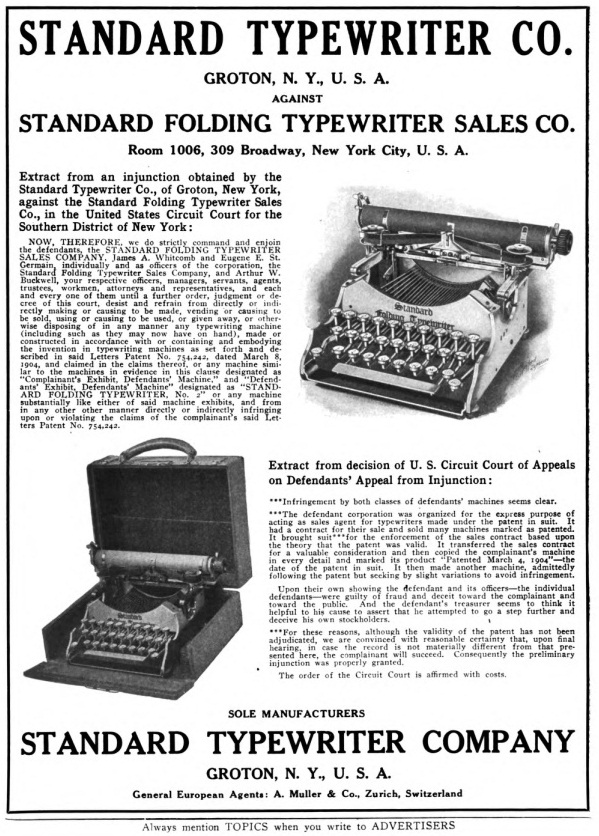 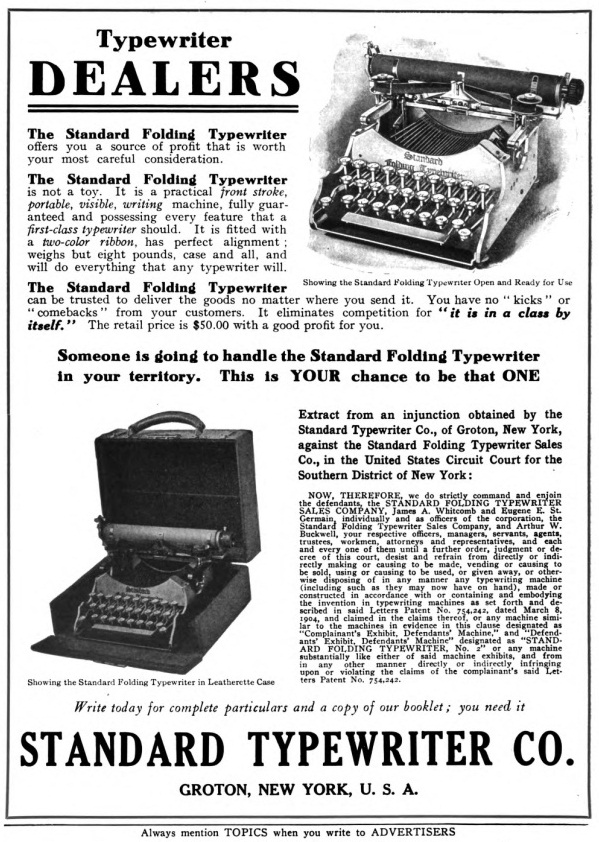 These curious advertisements will be explained by the following paragraph, which appeared in Typewriter Topics' A Condensed History of the Writing Machine in 1923: 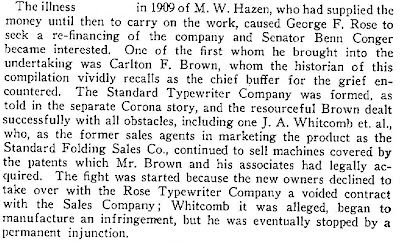 Typewriter Topics continued to follow the progress of the Standard Typewriter Company in 1911: 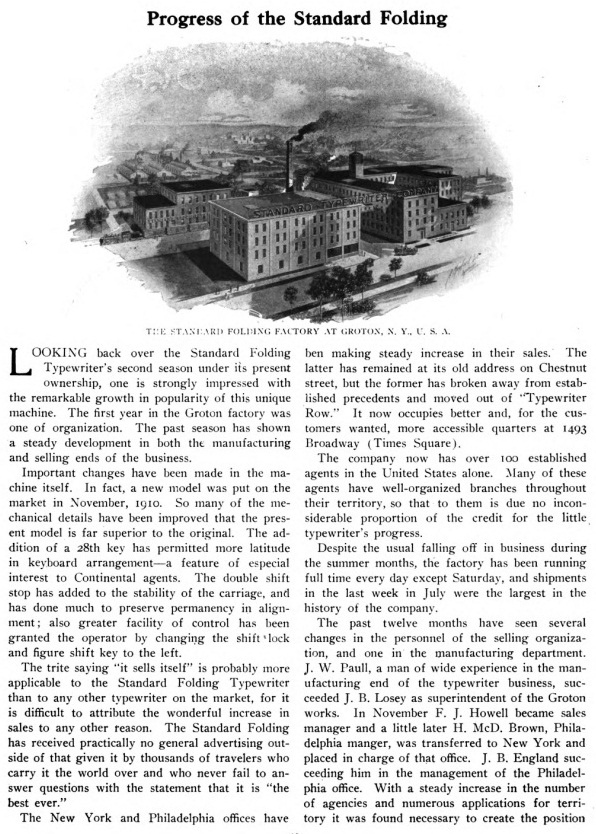 With the Standard Folding Typewriter and its successor, the Corona 3, leading the way in taking typewriters out of the office and into the home, making typewriting accessible to all, the question of the typewriter truly becoming the successor of the pen was discussed in Typewriter Topics: 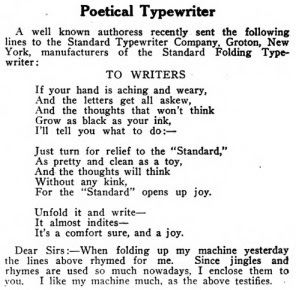 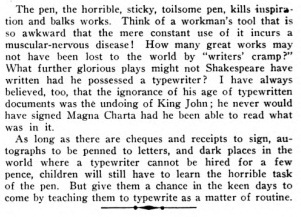 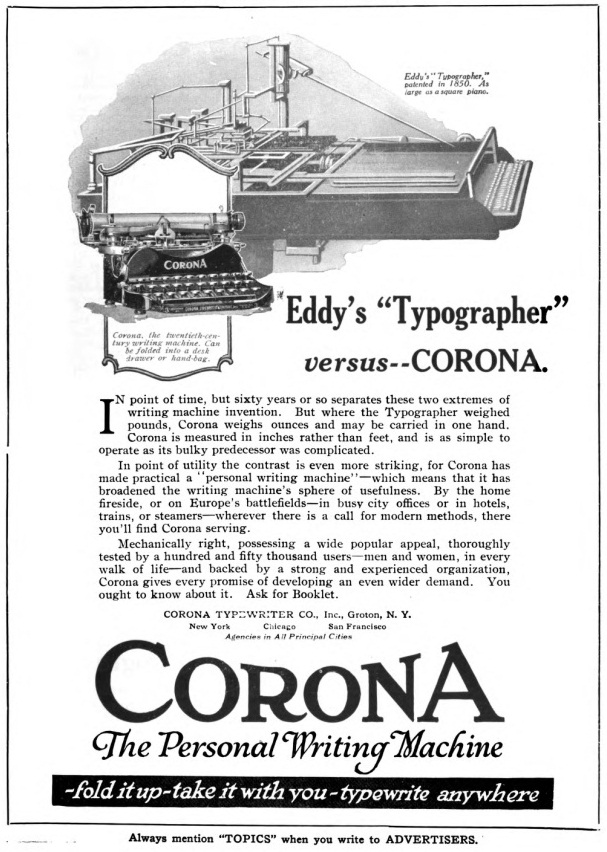 So ends our series celebrating the centenary of the Corona 3, right on the stroke of midnight on December 31, 2012.

Posted by Robert Messenger at 23:48

That was a fantastic series! Thanks, Rob, and have a happy new year!

True dedication to the cause. I am in awe. Hope you celebrate now!

Nice to see the add with Eddy's Typographer.