House of the Falling Fluff 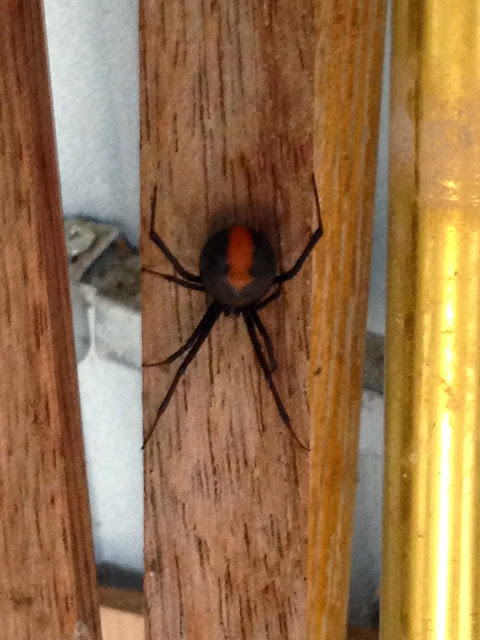 As if things weren't already bad enough, I got a send-off from this large female redback spider while cleaning out Elizabeth's garden shed. The redback (Latrodectus hasseltii) is a species of venomous spider indigenous to Australia. The adult female is easily recognised by her spherical black body with a prominent red stripe on the upper side of her abdomen. Females have a body length of about 10 millimetres. The redback is one of the few spider species that can be seriously harmful to humans, and it has been responsible for the large majority of serious spider bites in Australia. The venom gives rise to the syndrome of latrodectism in humans. An antivenom has been available since 1956, and there have been no deaths directly due to redback bites since its introduction. 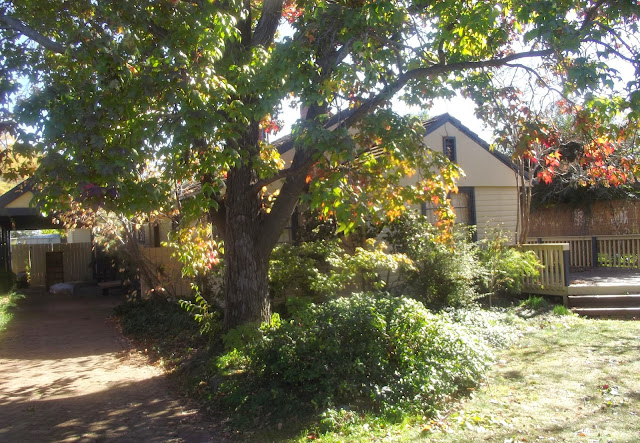 For me and my closest friend, these are very sad days indeed. This house, in which I have spent many happy hours, and which was once home to many beautiful old typewriters, is now locked up. It's about to be demolished. Why? Because in 1968 a get-rich-quick bastard called Dirk Jansen poured deadly asbestos fibre into its walls and roof spacings, selling it as insulation against Canberra's cold winters. 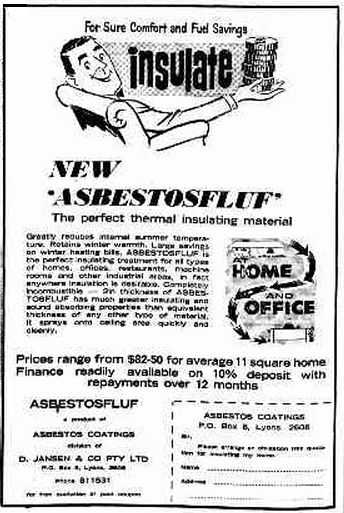 Canberra Times advertisement, March 1968
Calling himself "Mr Fluffy", Jansen is now the direct cause of considerable anguish, not to mention massive cost and potential premature death among Canberra citizens. The house above is just one of more than 1000 that are about to be demolished in the national capital and its surrounds. The home owners are being reimbursed by the Australian Capital Territory at a total cost of more than $1 billion, which the territory has had to borrow from the Federal Government, despite the Australian government's responsibility in allowing all this horror to happen. 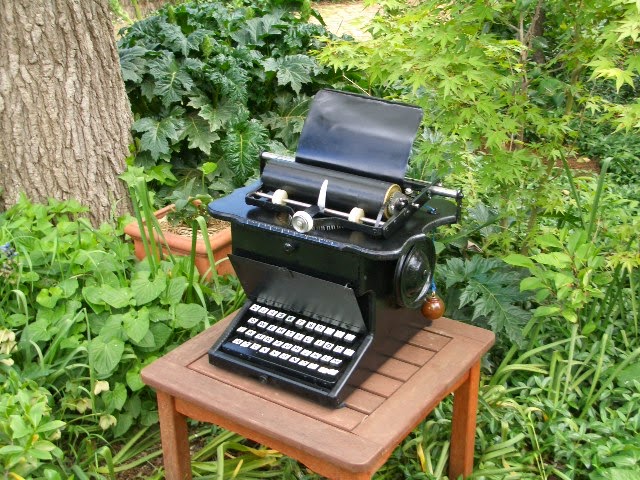 A mock S & G in the front garden of the soon-to-be-demolished Deakin house.
The affected house owners have had to find new homes. In many cases, the reimbursements don't even begin the cover the huge amount spent on home improvements or the total costs of buying new houses and moving. The reimbursements are based on the value of the land for future redevelopment, after it has been reclassified and remediated, not what value the dispossessed owners might put on what have been literally their castles for up to 47 years. 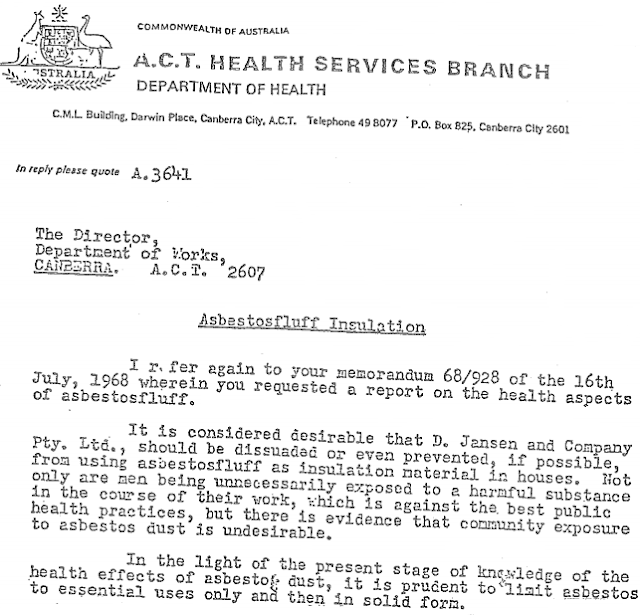 This typewritten letter from 1968 clearly proves that the authorities were warned of the dangers of Mr Fluffy way back then. But they chose not to act. Now good people are paying dearly for this official inaction and ineptitude.
The house above is a classic example of the upshot. It was long a family home, with considerable expenditure being outlaid over a period of 18 years on extensions, decks, rain water tanks, gardens and upkeep. And that's not even taking into account stained Jarrah libraries and the like. 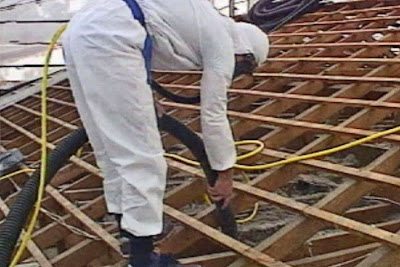 An unsuccessful "clean-up" job.
It was one of the houses which were "treated" with loose-fill asbestos fibre insulation from 1968. At that time, the Federal Government had legislative and administrative control of the Australian Capital Territory. A Commonwealth clean-up program between 1988 and 1993 was "thought" to have fixed the problem in 1049 homes, but fibres have since been found in most if not all of these houses. Home owners have been living amid the very grave risk of mesothelioma and other asbestos-related diseases for all these years. 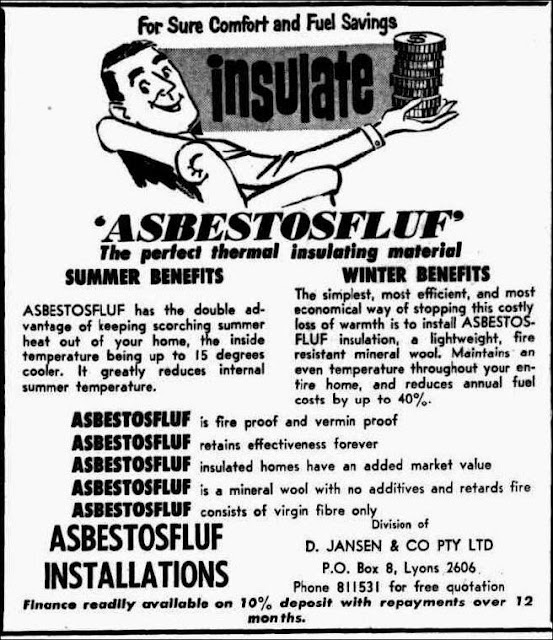 Dirk Jansen, born in Amsterdam, Holland, on July 9, 1923, was given the chance of a new life for himself and his wife and family when he immigrated to this country in October 1952, arriving as a bricklayer at Fremantle on the Johan Van Oldenbarnevelt. In the early 1960s he was a builder in Yass, then moved to Canberra as a builder and plasterer. He repaid this welcoming city by becoming "Mr Fluffy" - a dealer in death. For him, Asbestosfluf was just another of the entrepreneurial endeavours he pursued from his luxurious home on Olympus Way in Lyons. He started a company called D. Jansen & Co in July 1966. 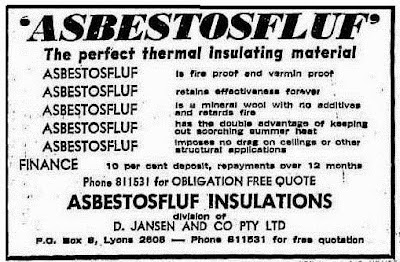 The next year he became the ACT agent for Asbestospray Corporation of Australia. Specialising in fireproof, thermal and acoustic insulation treatments, patents suggest these products contained the same two types of amphibole asbestos, amosite and crocidolite, that Jansen would use a year later for insulating homes. Jansen bought a second-hand insulation pumping truck in Sydney and established Asbestosfluf Insulations, a subsidiary of D. Jansen & Co. The material was usually amosite, produced by EGNEP, the South African mining subsidiary of Britain’s Cape Mining Company that had tellingly closed its last British asbestos factory the same year. Long before the proverbial hit the insulation fan, Jansen died in a Canberra nursing home from a heart attack, on November 25, 2001. 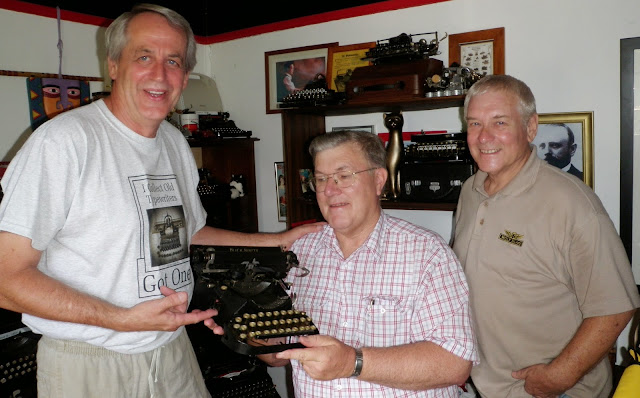 Happier times 1: Sydney typewriter collectors Richard Amery, centre, and Terry Cooksley visit the typewriter collection in the soon-to-be-demolished Deakin house.
While many Typospherians probably think I've been very slack with correspondence and other responsibilities these past several months, I have actually been flat strap most of that time helping my dear friend Elizabeth deal with the problems she has had to face. It is her home which is to be demolished.
Happier times 2: Elizabeth celebrates "Typewriter Day" by typing on a Fox No 24 standard in her dining room.
Since September last year, she has had come to terms with all this, finding the additional funding for a new house and organising the removal of what she could take from her asbestos-filled home. To be frank, the whole exercise has been a prolonged nightmare - obviously much more so for her than for me. But even now that she has found, bought and moved to a new house, the sadness of emptying the "Mr Fluffy"-affected home as been absolutely heart-wrenching. It's been a most distressing experience. 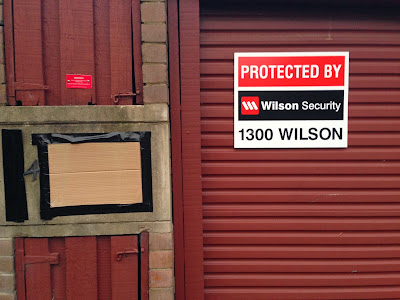 Two town houses directly opposite where I now live have been abandoned and locked up by the government because of Mr Fluffy insulation. 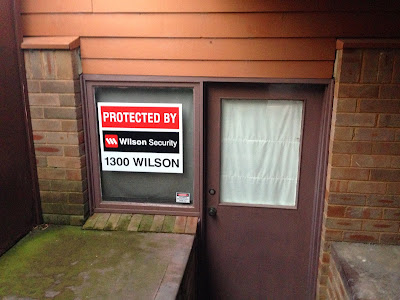 Obviously many other innocent Canberrans have had to go through this same torture. Money alone can never compensate for what they have been forced to endure, or for what they have lost. Another lady who found herself having raised a family in a "Mr Fluffy" house was Karen Rush, below, who so kindly facilitated the gift of my favourite portable typewriter, my "go-to" early model Bijou 5, from Ruth Landau while I was living in the soon-to-be-demolished house in Deakin. 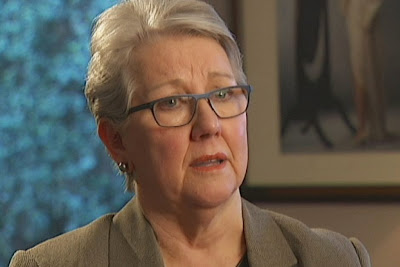 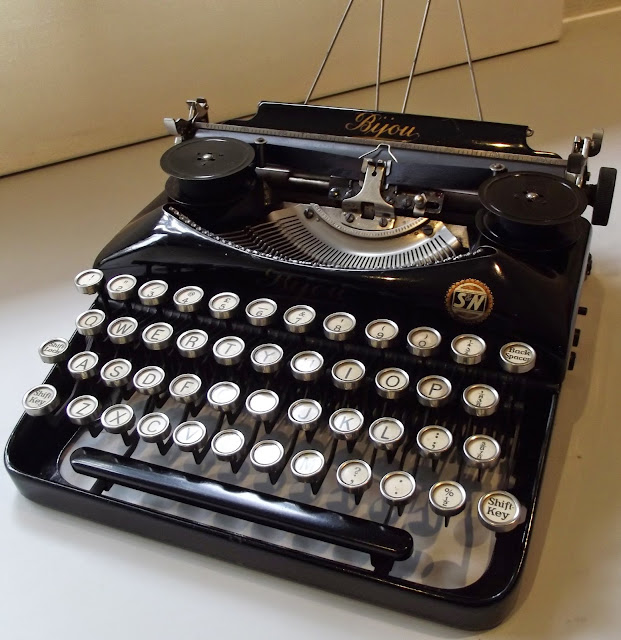 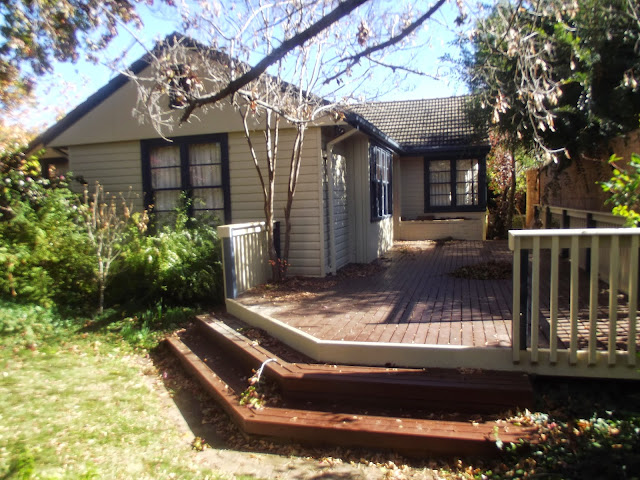 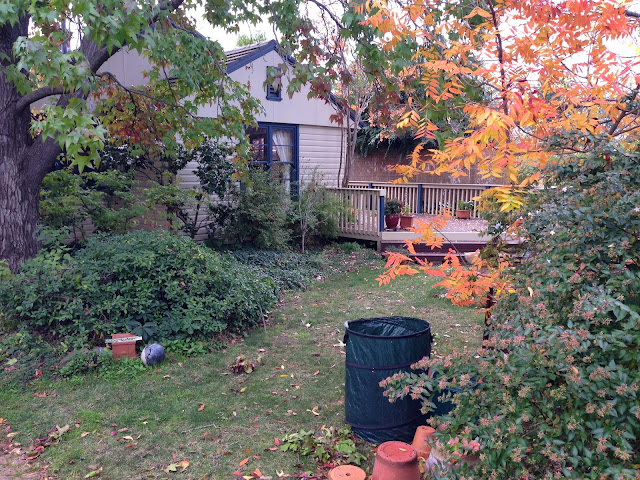 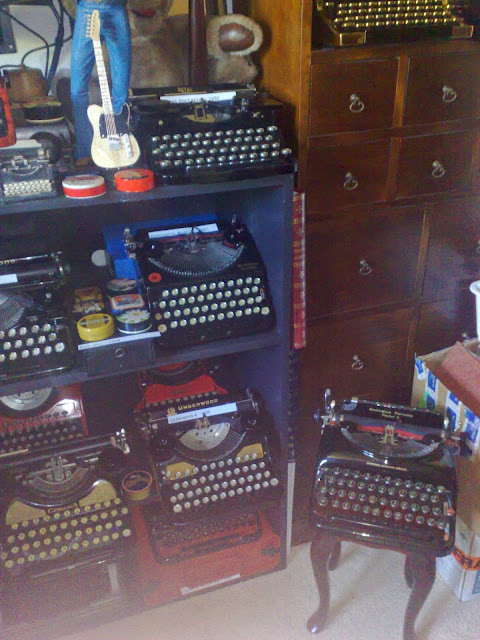 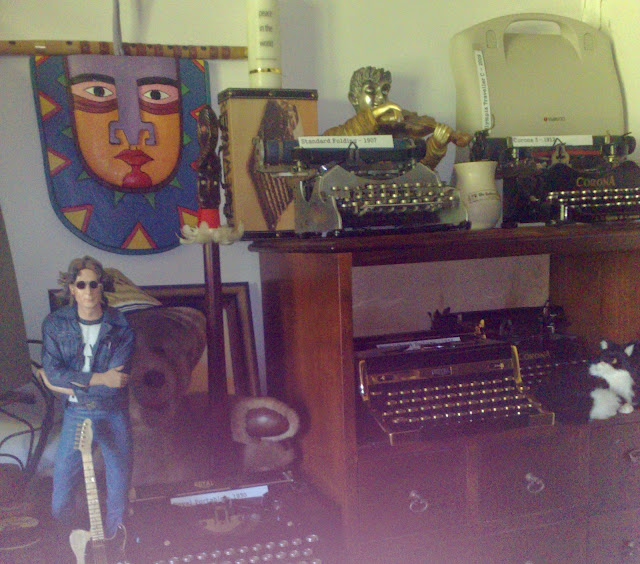 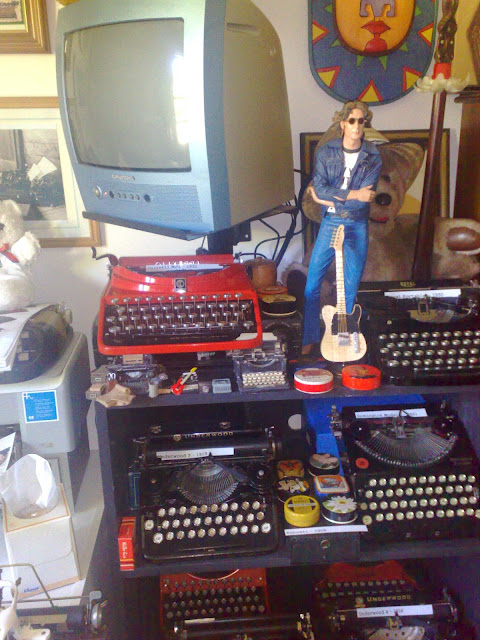 Posted by Robert Messenger at 15:06

Of course I had to look up "latrodectism" - and find it very interesting that a similar poison is carried by spiders (Australia's red back and North America's black widow) which evolved on different, widely-separated, continents. While their bodies are very similar, our black widow carries her blaze - a red hourglass - on her underside.

What a lovely, sweet home, that is being destroyed. Sad. But the sound of the typewriter was a joy to hear.