ETCetera - The Next Century 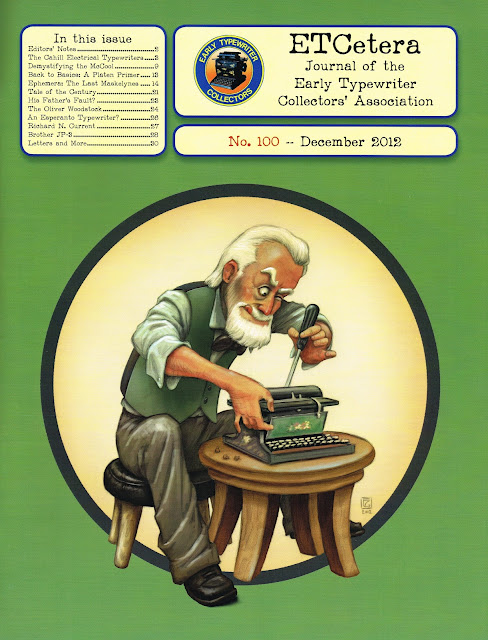 One would hope that your most earnest Christmas wish came true, and in your Christmas stocking was a subscription to ETCetera. This wonderful journal now enters its second century, the December 2012 edition having been issue No 100 - it has been coming out quarterly for 25 years. Edition No 101 appears in March 2013.
See an index of the first 100 editions here.
Subscriptions for 2013 are now due. The cost is a mere $35 in North America and $US40 (31 euro) elsewhere. None of us would hesitate to spend $40 to try out a "new" old typewriter at least once a year, so $40 is not much to spend to receive four bundles of joy every 12 months, in the shape of the latest ETCetera, jampacked full of typewriter information, airmailed to your doorstep. Payments can be made by PayPal to etcetera.payments@gmail.com 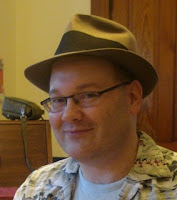 Incoming editor: Alan Seaver
ETCetera No 100 was the last issue under editor Richard Polt (The Classic Typewriter Page, Writing Ball), who now hands over the reins to Alan Seaver (Machines of Loving Grace). The 100th "bumper" 32-page edition was the crowning achievement of Richard's 6½ -year, 28-issue stint as editor, and another lasting, major contribution to typewriter history. Under Richard, ETCetera achieved a level of consistent professionalism in its production which would be the envy of other, like magazines, and we are all confident Alan will maintain that high quality of content and presentation.
The Early Typewriter Collectors' Association roster has 165 members, of whom only five are in Australia. It's imperative that we keep this journal going - not just for another 100 editions, but forever. The printed word is, after all, an absolute guarantee that this typewriter information will remain accessible until at least the next Mayan apocalypse.
Where else, for example, would one find out anything about the Conqueror typewriter? 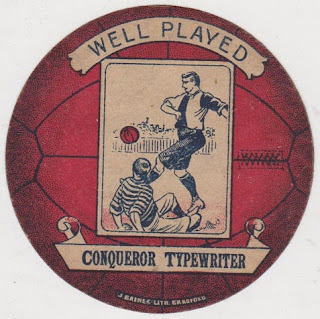 Remington Envoy V
As mentioned in my post on the Remington Envoy V, a hybrid of the Envoys II and III (after the Envoy II base was smashed), I swapped the carriages again and the machine is working very well. In response to queries from Scott Kernaghan and Richard Polt, however, I would add that, like any Dutch-made, Carl Sundberg-designed plastic Envoy of this early 1960s period, its action is very "rattly":
Gold-plated Blick, Corona 3
Spotted for sale on eBay in the past week were this gold-plated Blickensderfer 7, which sold for $US5496, and in Australia this Corona 3, which appears to be sans decals: 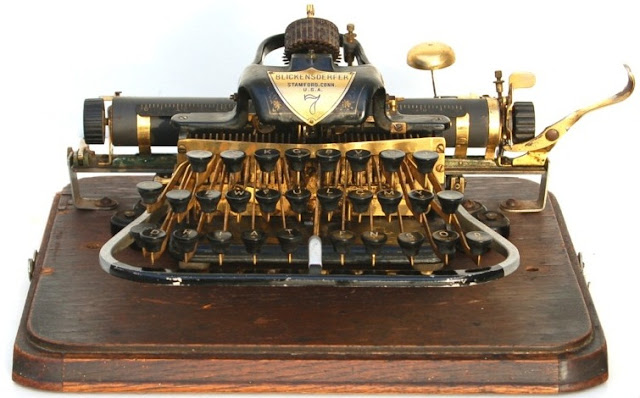 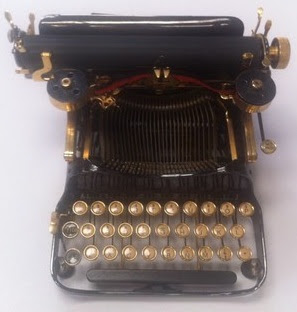 Meanwhile, in Australia, an orange plastic Olympia Monica electric attracted 50 bids and sold for an incredibly inflated $639, and a bilious "hot pink" plastic Remington Riviera sold for $290 after 21 bids. This sort of nonsense apparently knows no end.
Olivetti Lettera 22
After my post on Ray Nickson's model, Florian at maschinengeschrieben drew my attention to another Olivetti Lettera 22 with an embossed brand name on the paper plate. This one was for sale online in Switzerland: 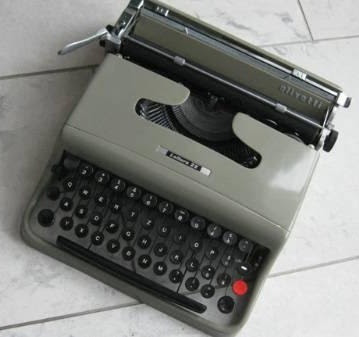 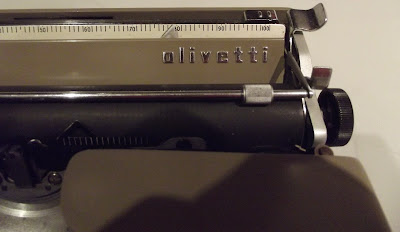 Many readers commented that they thought the embossed brand name had a superior look to the normal arrangement. About this same time I was working on an Olivetti Lettera 32 for a Canberra diplomat and instantly noticed what I thought was a much superior arrangement for the ribbon spools. The nuts which normally hold the spool in place on Olivettis, and which are essential for the movement of the spools, can often be a problem, especially with "universal" ribbons, and have been known to self-tighten. As with the embossed brand name, I cannot think why Olivetti abandoned this good idea. It seems to work perfectly well - maybe the objective, as with Remington, Royal and others, was to force users to buy Olivetti-specific ribbons: 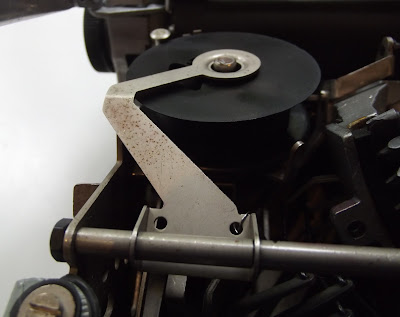 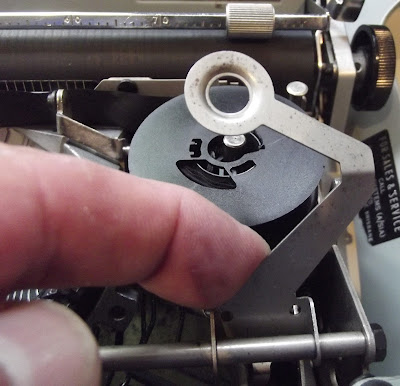 'Bitsa' Underwoods
Since I posted on my Underwood standard which appears to comprise components (such as keytops and decals) from different eras,  I have read about the way in which companies which had service contracts with Underwood had their machines refurbished and "upgraded" in such a manner. This machine, for sale on eBay, must be another classic example, surely: 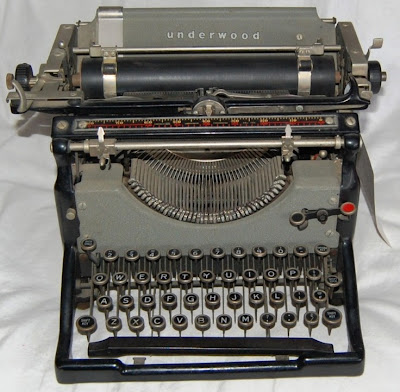 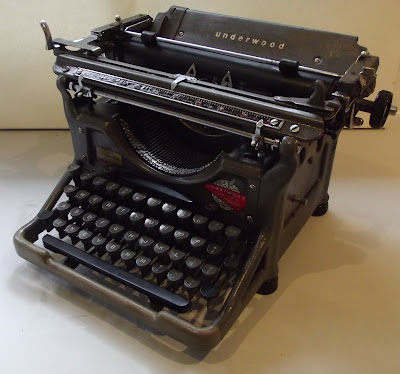 SS Torpedo Standard
Again, after a post about my Remtor portable, in which I included an image of a Remtor standard in Hungary, I have come across the original Torpedo version, plus a very similar one that is a Urania. The Torpedo has a high price on it, because of the Nazi SS symbol key (is it self-censored, or censored by eBay?): 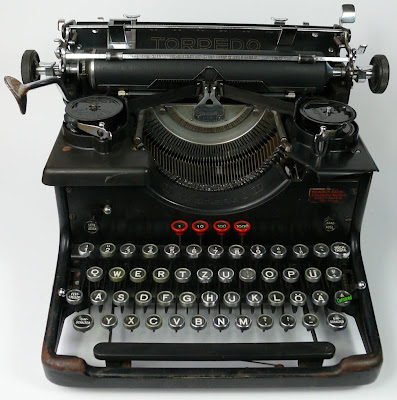 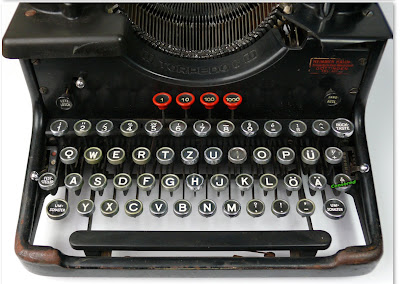 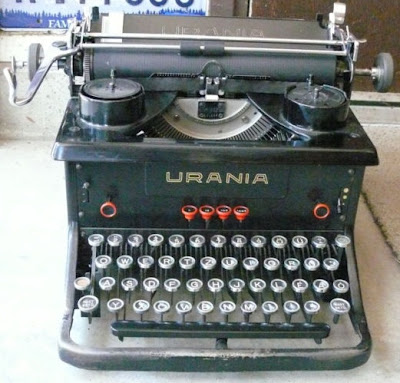 Soft Keytops
Was it Peter Baker (notagain, Manual Entry) who was interested in soft keytops, and said he hadn't seen adverts for them? I came across these in early editions of Typewriter Topics: 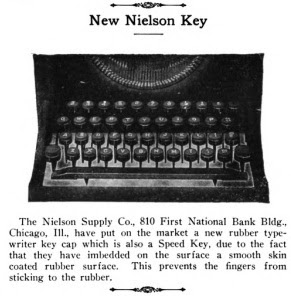 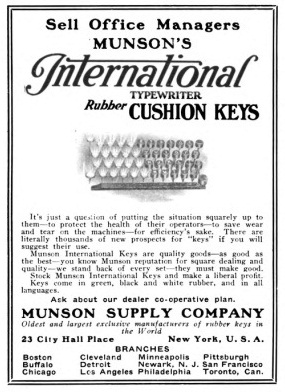 Isn't it funny how today people yearn for silver-ringed keytops on typewriters, and here they were in the early 1920s covering them with rubber?
Ray's Underwood Noiseless 77
Thank you to all those who responded to our call for help with Ray Nickson's Underwood Noiseless 77, a wedding gift from his American father-in-law, which suffered a grievous injury during "repairs". Michael Klein in Melbourne has stepped forward and I am very hopeful progress will soon be made: 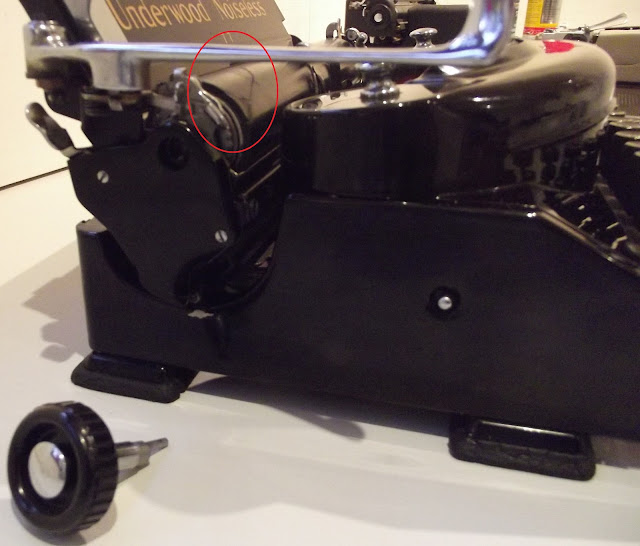 Typewriter Platens
On this same subject (replacing platens), Richard Amery in Sydney has asked if any Typospherians have had  dealings with the Jizhou Chunfeng Import & Export Co Ltd, a subsidiary of the Chun Feng Industrial Group in Huabei Plain, Jizhou City, Hebei Province, China (I think they also make typewriters). Richard is interested to know about their platens and feed rollers: 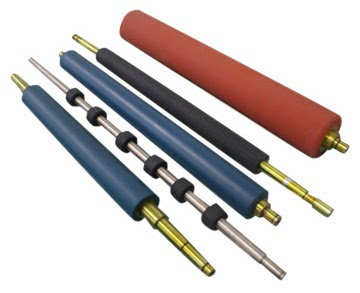 Tell-tale Typewriters
An interesting article from Popular Science Monthly in 1921: 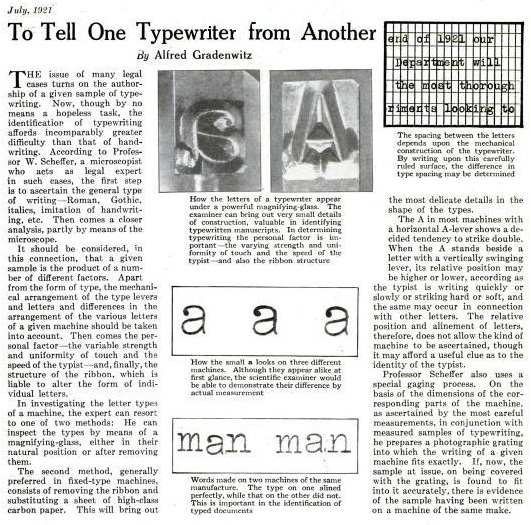 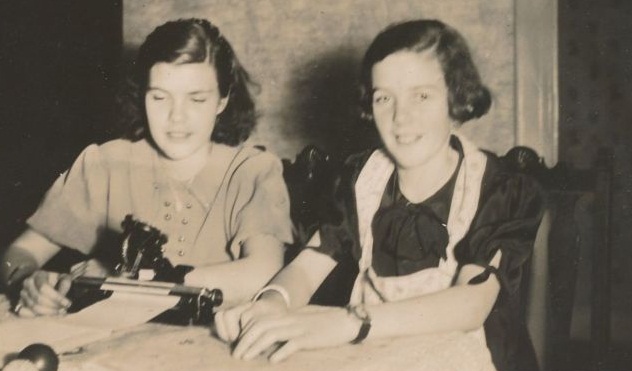 Where Did It All Go So Wrong? 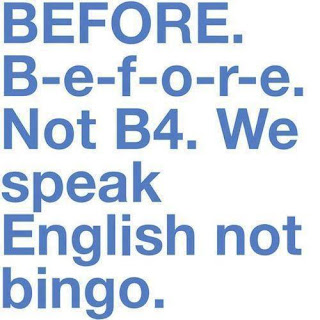 Posted by Robert Messenger at 10:05

I don't know where it went all so wrong. The weird typewriter sure is a Marx toy. And EVERYBODY PLEASE SUBSCRIBE TO ETCETERA MAGAZINE.