George William Campbell: Inventor of the Franklin No 9, Victor Nos 1-3 and the Underwood Four-Bank Portable Typewriter 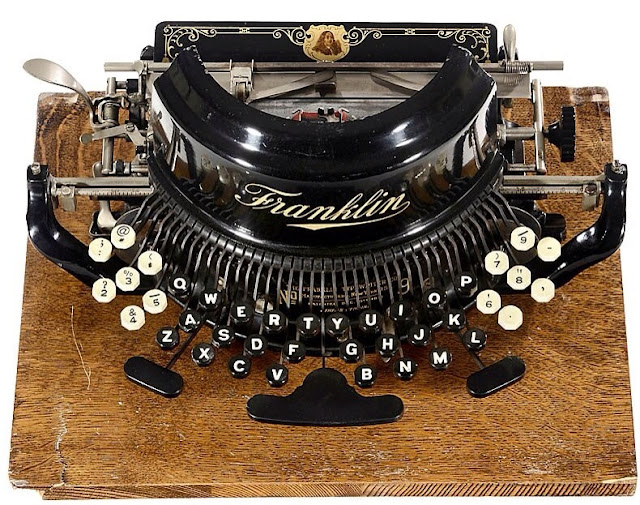 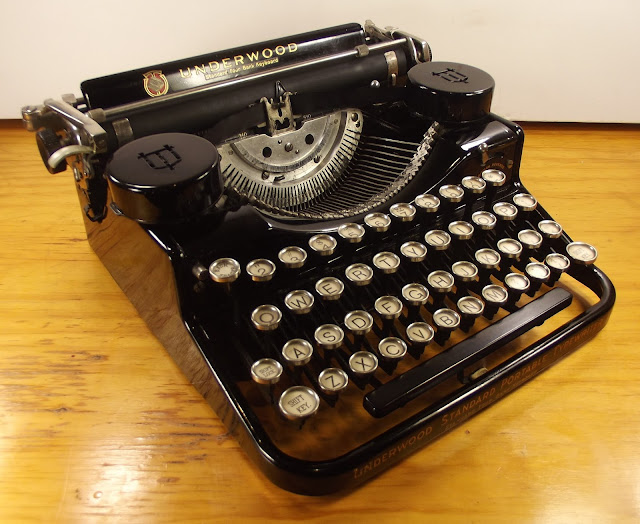 This Underwood Four-Bank Portable Typewriter,
serial number 466477, was made in 1930,
the fifth year of production.
It was designed in 1918 by George William Campbell. 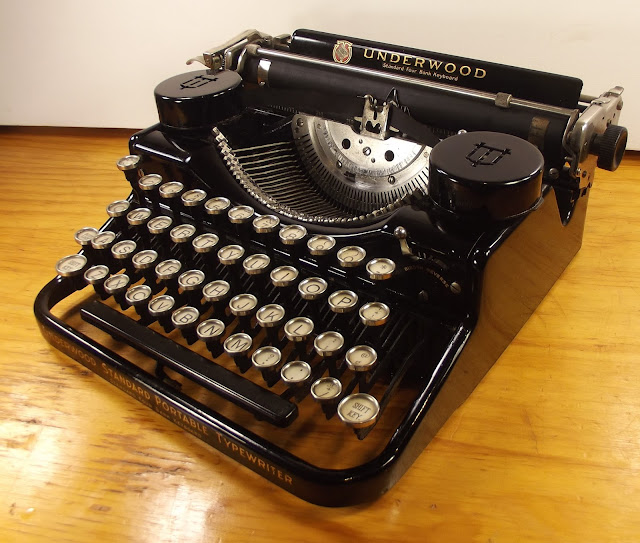 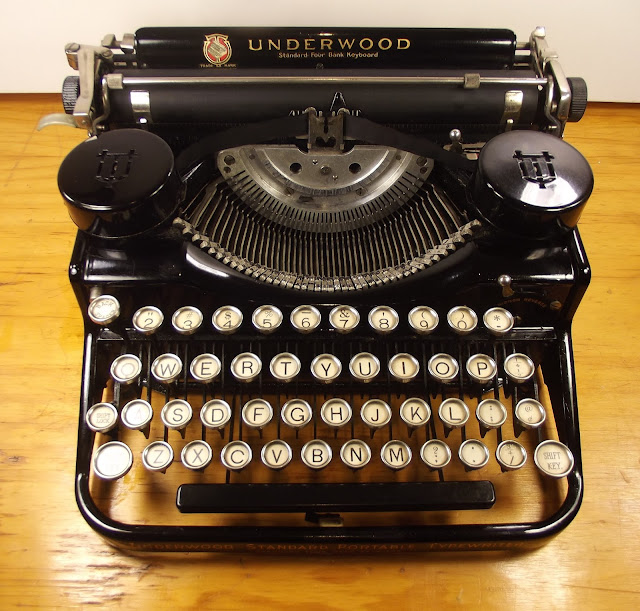 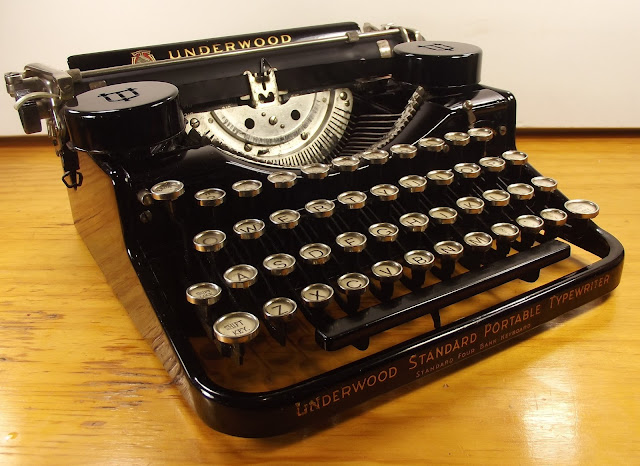 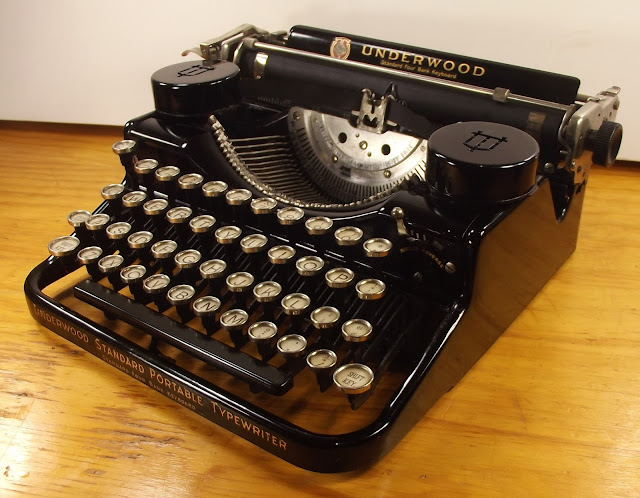 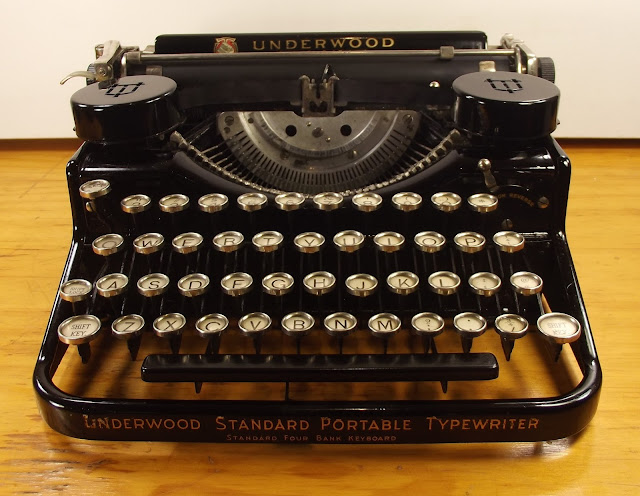 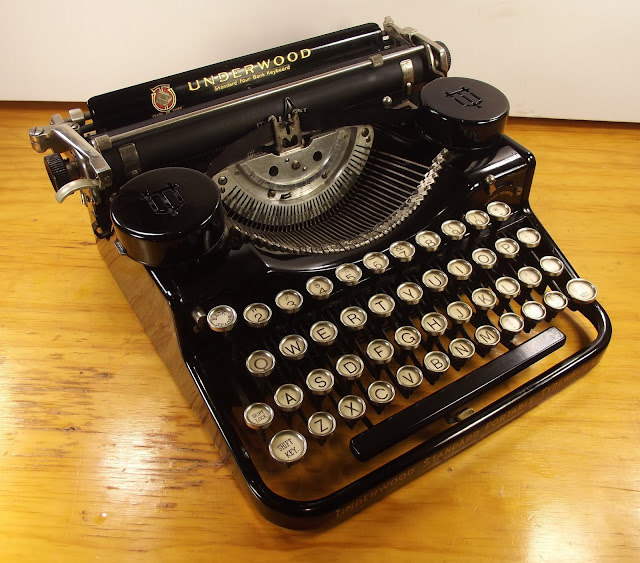 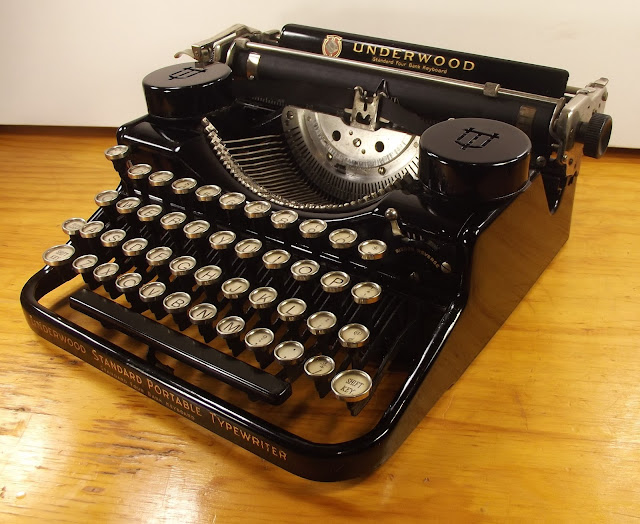 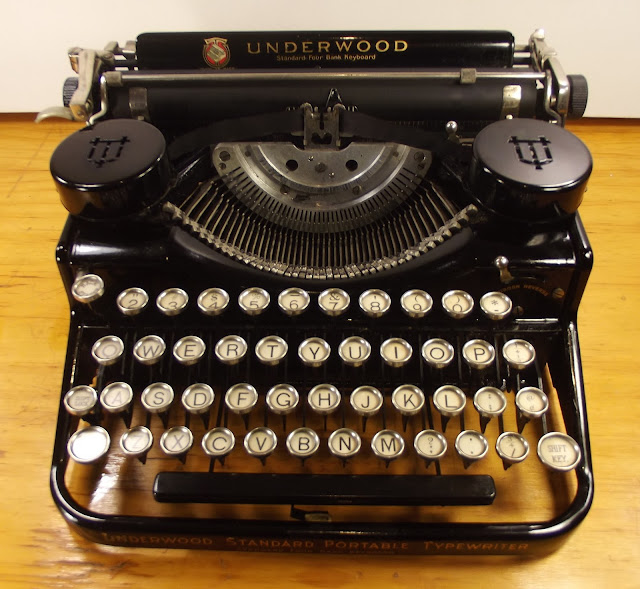 It's amazing how much one can find out about the history of a series of typewriters by simply digging under the career path of one man.
That one man is GEORGE WILLIAM CAMPBELL, born to Scottish migrant parents in New York City on May 23, 1872.
Campbell is the typewriter mechanical engineer and designer responsible for at least three machines which are among most collectors' favourites: the Franklin No 9 (with the concealed ribbon spools), the Victor No 1, which of course in time (12 years) grew into the Victor No 10 (the only Victor which Campbell had nothing to do with), and the first Underwood four-bank portable typewriter. 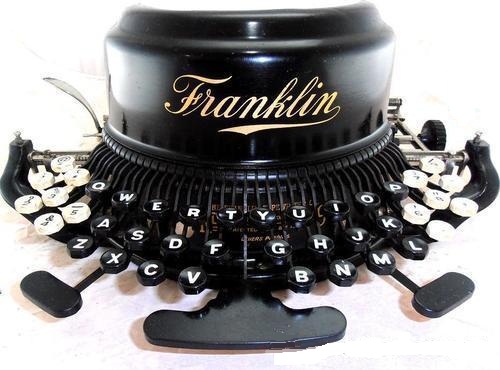 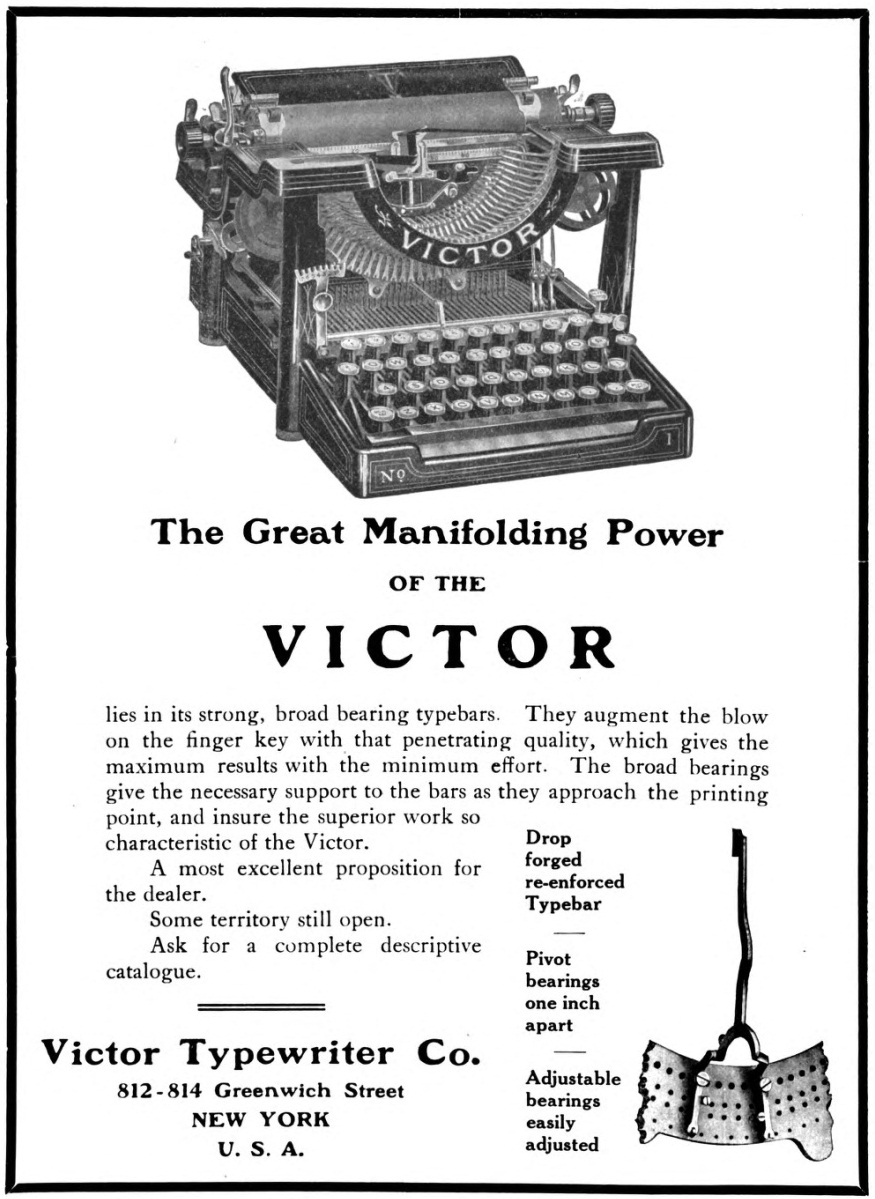 In retracing Campbell's steps during a truly remarkable 50-year career in the US typewriter industry, which took him from Boston back to his native New York and on to Hartford, Connecticut, I was able to finally deshroud the obscurity surrounding the Victor's origins - not to mention its fate. 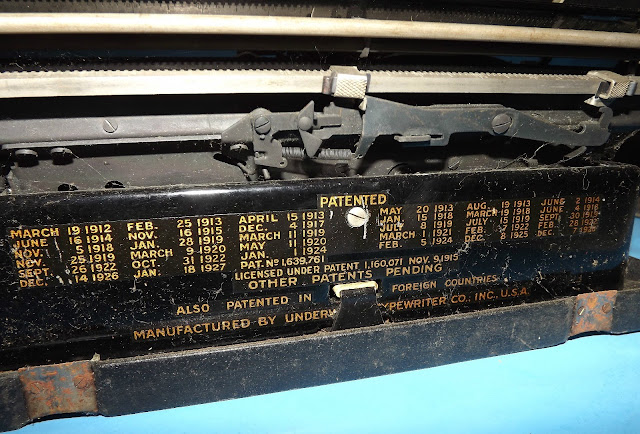 It all started with the appearance on US eBay last night of an Underwood four-bank portable with a decal on the back which showed all of the 32 patent dates associated with the 14-year component development (1912-1926) of this wonderful machine. As I checked through these, I found that Campbell had in fact come up with the original design for this almost flawless typewriter. 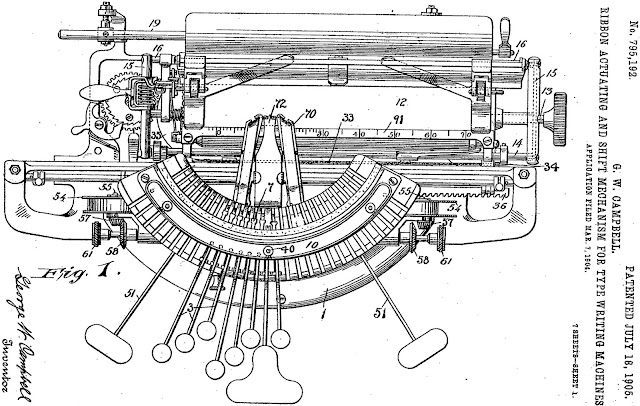 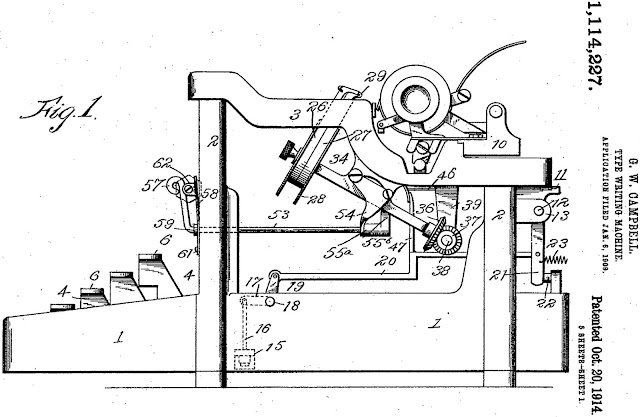 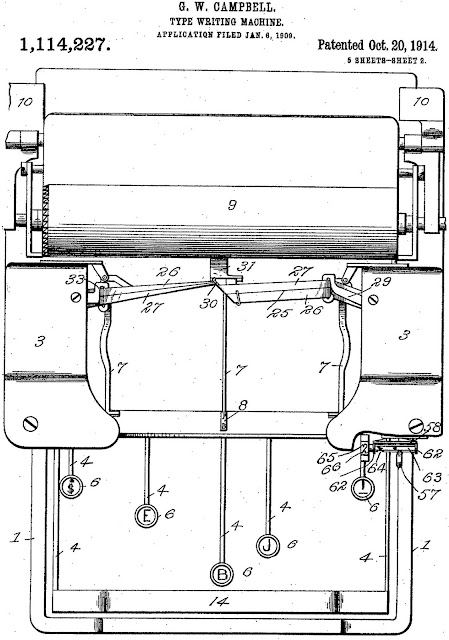 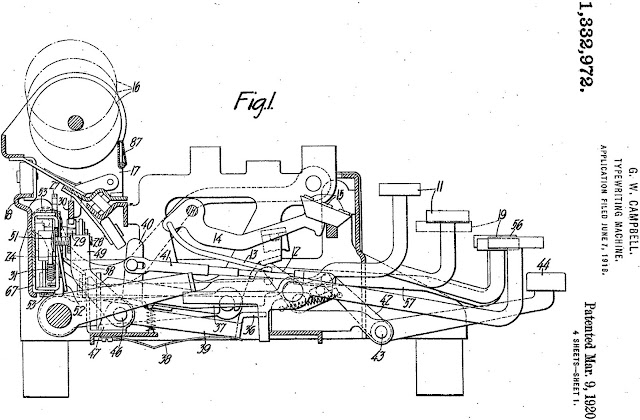 Underwood Four-Bank Portable 1918
When I started looking into Campbell's typewriter-designing career, my eyes were really opened up - I found 25 typewriter inventions patented by him, as against just the one in the patent database. I had previously been aware of his existence, and of his work for Victor and Underwood, but had no idea of how significant or extensive it was. More importantly, I didn't realise he had worked for Franklin in Boston before returning to New York City in 1907. He provides a vital connection in our understanding of how Franklin transmogrified into Victor. Typewriter Topics' 1923 A Condensed History of the Writing Machine had been far, far too oblique on this subject, reporting details as if stepping on egg shells. 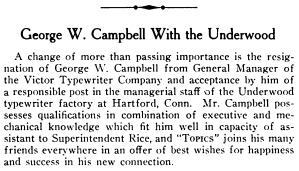 Typewriter Topics, December 1916
In 1918, Campbell had been working with Willie Dobson in making improvements to the Underwood three-bank portable, which Lee Spear Burridge had designed just before his death in 1915 and which did not go into production until 1919. Essentially, Campbell and Dobson were making adjustments to Burridge's design, incorporating typewriter advances which had occurred between 1915 and 1919 - plus Campbell designed the Underwood 3's fantastic, compact little case. 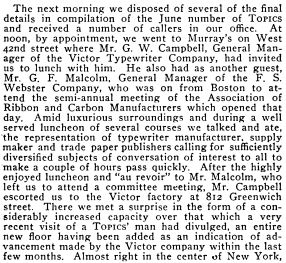 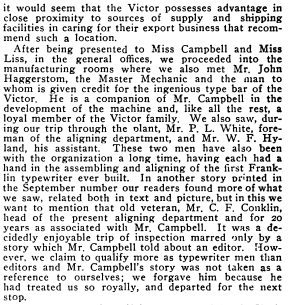 Typewriter Topics, 1909
But I'm getting ahead of myself, in my excitement at discovering all of this. Campbell was a typewriter technician who started working for the Tilton Manufacturing Company making the Franklin in Boston in 1889. Wellington Parker Kidder's Franklin had languished for a few years, the last versions of it, the Nos 7 and 8, having come out in 1898. Campbell revamped the machine, notably taking the ribbon spools away from the back centre, above and behind the platen, to being concealed under the segment.
When Franklin turned into Victor and the works - including Campbell, as well as lock, stock and barrel - moved to New York, Campbell took over as general manager and designed the frontstrike Victor No 1. 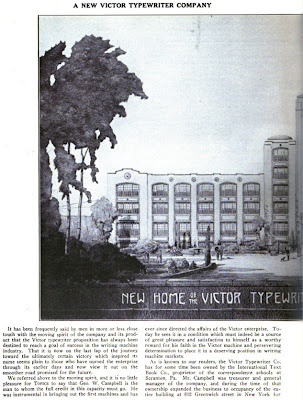 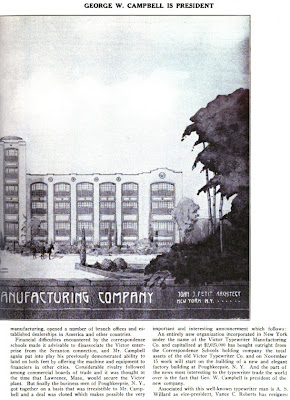 Typewriter Topics, 1915
At this stage Victor, still owned by International Text Book (which in turn was owned by a holding company, the financially-troubled International Correspondence Schools) was moving to Poughkeepsie, New York, but obviously the deal floundered and in 1917 the factory moved to Scranton, Pennsylvania. Technically, ICS had held the Victor assets, which Victor bought in 1915. In 1921 Victor and ICS became separate entities. Victor was sold to the Victor Adding Machine Company in 1925. See my post on this here.
Campbell ran the show at Victor until after it was sold by Robert J.Edwards in September 1912 to the International Text Book  Company of Scranton, Pennsylvania. Victor eventually moved to Scranton in 19197, but without Campbell. In November 1916, as Underwood began to rapidly expand at Hartford, including starting to look at producing its own portable, the company headhunted Campbell to leave Victor and move with his wife Lilla to Connecticut. There the couple stayed until the mid-1930s, with Campbell remaining superintendent of the Underwood factory well into his 60s. 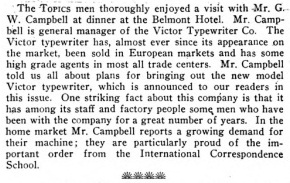 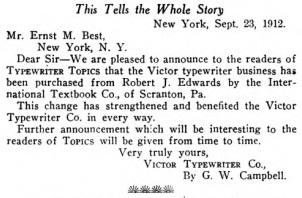 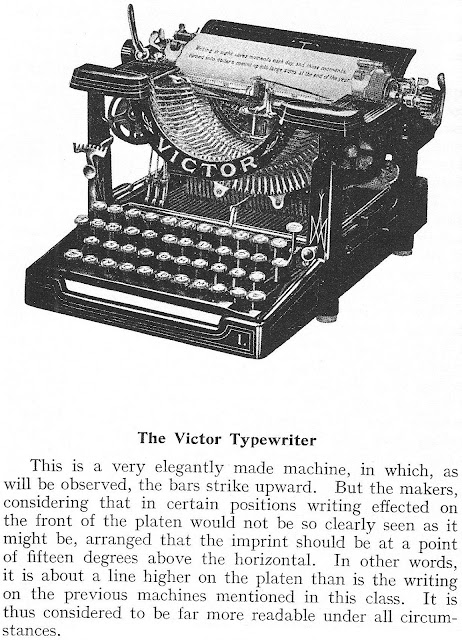 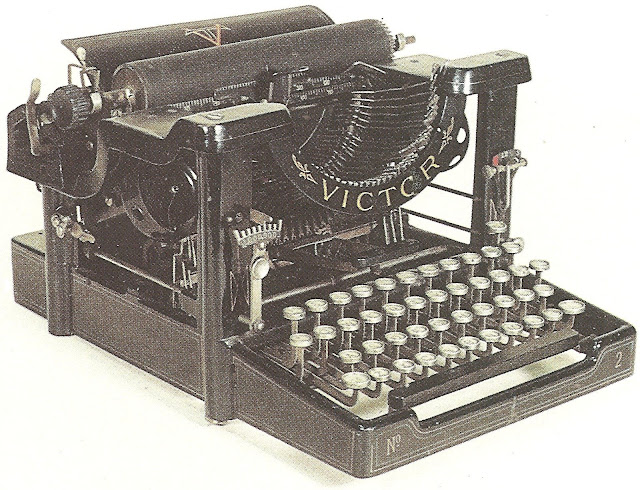 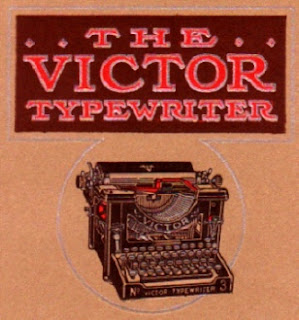 I cringed, too, to see the term "horrid" applied to that beautiful woody.

A concerned typospherian said...
This comment has been removed by a blog administrator.
31 July 2013 at 21:40

Seriously though, fascinating article on Campbell. It's only through your diligent research that I know as much as I do of typewriter history, so please don't get too distracted by the "concerned typospherian" (whoever that was). Your attention is too valuable to waste on stressy internet trollers. (:

I can't see how anyone would object to a woodie. My Royal woodie is a prized posession. And only last week in Spitalfields Marked with Richard we were inevitably drawn to a green marbled finish Underwood 3 bank. Who wouldn't be? Aaaanyway, thanks for another great history lesson - and for championing the 'ever so 'umble Underwood 4 bank. A solid design which continues to delight.

That machine is far from horrid. At least you are posting photos of interesting machines, rather than flooding the Facebook group with photos of the same typewriters over and over, that you are trying to hock in your over-priced online store. That's what I call horrid.

I do not know which of those fine typewriters I like the best. You have lit a fire under me to get more Underwoods, and to get mine in as good of conditions that I can.

I love the factory. Too bad we no longer have those neat huge factories. Worse yet, that we have no factories at all making any fine typewriters.

It's a shame they didn't appreciate your Underwood--their loss. Some of the nicest older typewriters were adorned with woodgrain and I think it only elevates their beauty!

Where is the 1 key on the Underwood?

Every typewriter I've used (admittedly not many) had the "normal" 1 key.