Ideal Typewriter For A Prince 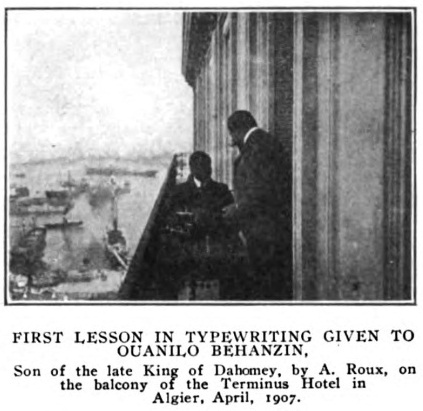 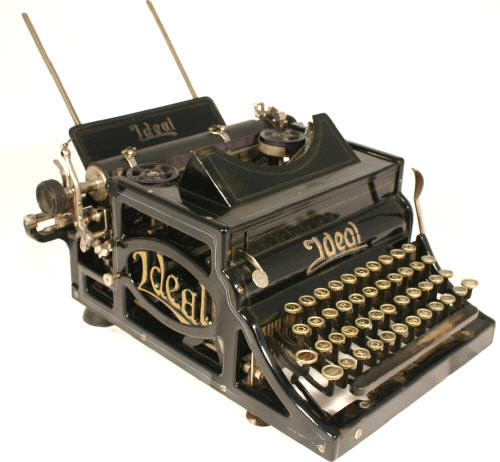 Wim Van Rompuy Collection
(Wim, as with all other Belgians, has a new king as of today!) 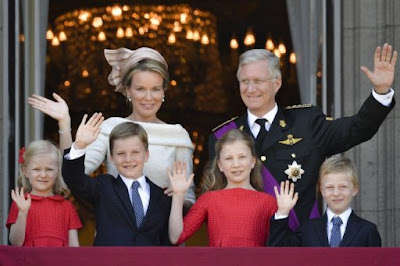 King Philippe of Belgium, his wife Queen Mathilde
and their children wave from the Royal Palace in Brussels 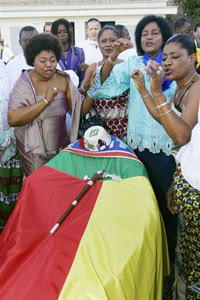 In late September, 2006, the remains of Prince Ouanilo Béhanzin, son of the last king of Dahomey (in the centre of the current Benin) were returned to his homeland and his ancestors. His body was exhumed from a cemetery in Bordeaux, where, unknown to the royal family, it had laid since 1928. The coffin, draped in the national colours and carrying all the princely attributes, was taken to to Abomey, the capital of the kingdom. Ouanilo was buried there in a small palace built in his memory. 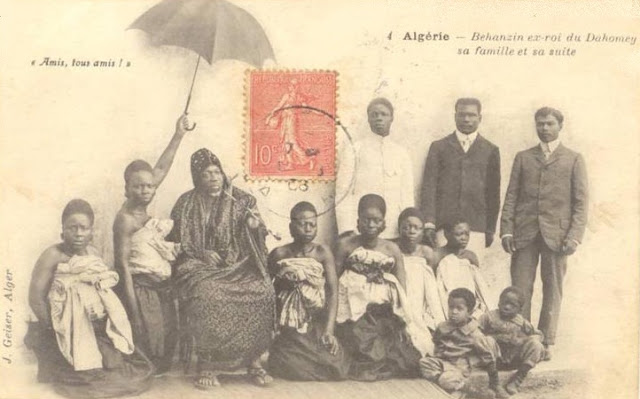 Béhanzin, left from left, with pipe, and his exiled royal family.
Born in Abomey on December 15, 1885, Prince Ouanilo Arini Béhanzin went into exile with his father, the king Ahidjere Béhanzin, who was dethroned by the French in 1894. Béhanzin was the 12th and last sovereign king of Dahomey. Béhanzin and Ouanilo were exiled to Fort-de-France in Martinique, where they lived until 1906. They were allowed to move to Algeria in April 1906 and Béhanzin died there on December 10, in the arms of the crown prince Ouanilo. 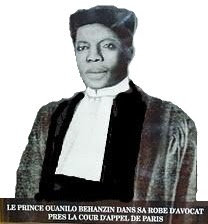 Ouanilo remained in Algiers. He was refused entry to a military college in Saint-Cyr but gained a degree in agricultural engineering and a BA in Law in 1909 and graduated with a law degree in 1912. He was in the French army as an artillery officer in 1914 and a trainee lawyer practising in Paris in 1915, the first black man to be a Parisian lawyer. Ouanilo worked for a railway company in Bordeaux, but after finally succeeding in returning his father's remains to the palace of  Djimé in Dahomey, died from pneumonia in a military hospital in Dakar on May 19, 1928. He was buried in Bordeaux on October 3, 1928, aged 43.
His father, Béhanzin, had been the most powerful ruler in West Africa at the end of the 19th century and strongly resisted European intervention into his country. His army included 5000 female warriors. He is often referred to as the King Shark. He died in Blida at the age of 65. 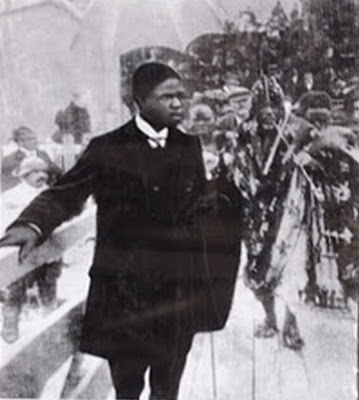 Educated by the Plöermels and at the Lycée Schoelcher in Martinique, Ouanilo mastered the French language and from 1900 wrote all the king's correspondence, including protests against the injustice done to the king and demands for his return to Dahomey. 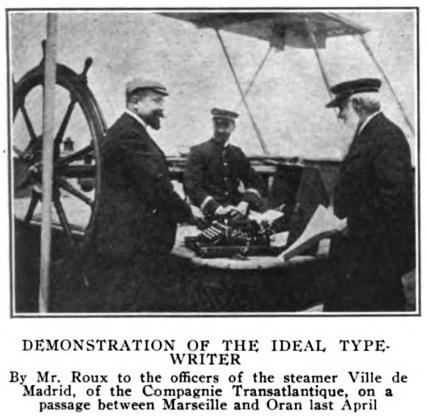 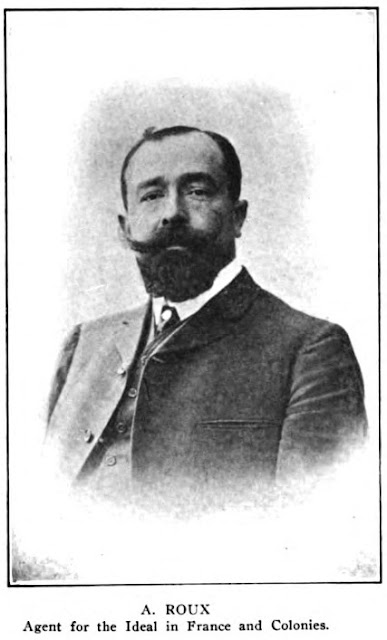 The same André  Roux who taught Prince Ouanilo to type on an Ideal typewriter and demonstrated the Ideal at sea on the Ville De Madrid was responsible for commissioning this famous typewriter poster: 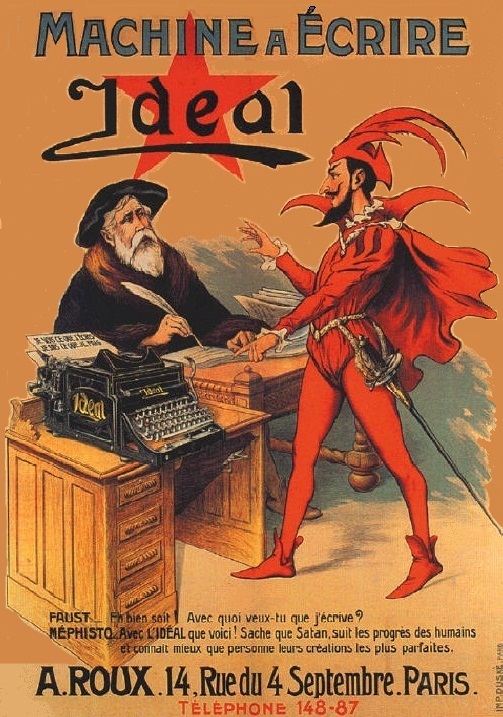 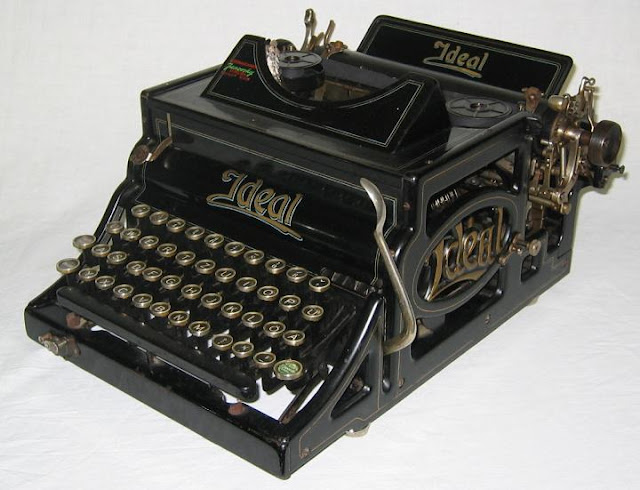 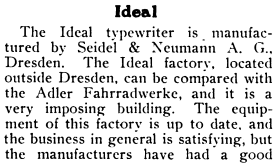 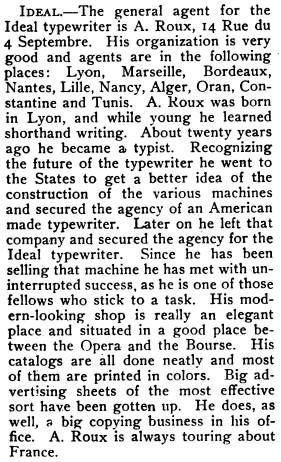 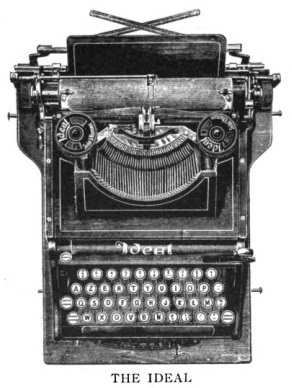 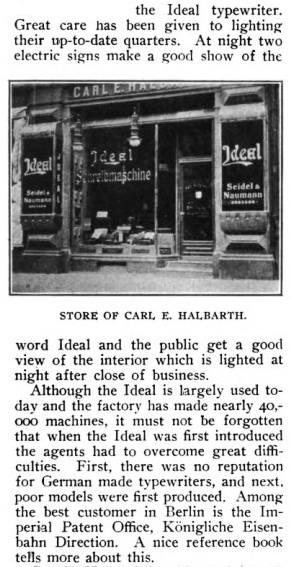 Posted by Robert Messenger at 16:43

Very well done. I love that Ideal. Do you have any photos or mechanical drawings of the unique under-the-works carriage return? I have never seen one like that before.