Yirrkala Bark Petitions: The White Lady Poet Who Typed Them 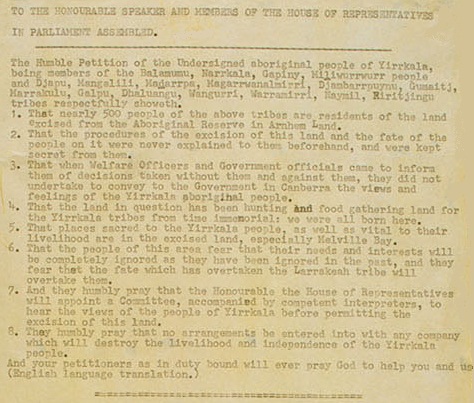 I'd like to hear from anyone who might be able to
identify the typewriter on which this was written.
I hate to rain on a parade, but as Australia celebrates the 50th anniversary of the groundbreaking Yirrkala Bark Petitions today, I have found that the typewriting of the petitions was NOT done by Aboriginal leader Wandjuk Djuwakan Marika, as has been widely claimed, but by the noted author and poet Annie Elizabeth Wells.
Closer inspection of the passage in the book being cited as the source of the information regarding Wandjuk's "old typewriter" and the petitions reveals it was Mrs Wells, wife of the East Arnhem Land missionary Edgar Almond Wells, who typed the final version of the petitions.

Edgar Almond Wells (1908-)
The Reverend Mr Wells, indeed, wrote that Wandjuk's typewriter "could not possibly produce a result good enough for the Prime Minister of Australia [Sir Robert Menzies] and the Minister for Territories [Sir Paul Hasluck]".
While this truth may take some of the gloss off the romantic vision of an Aboriginal leader typing these historic documents, it nonetheless focuses more clearly on the difficulties the Aboriginal people had encountered in producing the petitions. 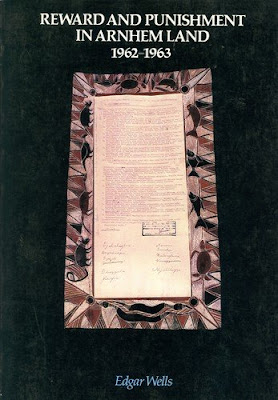 Indeed, the relevant passage in Edgar Wells' book Reward and Punishment in Arnhem Land 1962-1963 [Australian Institute of Aboriginal Studies, Canberra, 1982] exposes the lack of cooperation from his mission staff in helping the Aboriginals to put the petitions together.
1. White mission staff had refused to type the documents.
2. Mrs Wells stepped in and volunteered to type the final versions "as a private citizen".
3. For helping the Aboriginals complete and post the documents, Wells and his wife were within four months (late 1963) expelled from Arnhem Land by the Methodist Overseas Missions and sent packing to Bulimba in Brisbane.
While on the one hand the idea of the Aboriginals typing the petitions themselves has been played up this week, on the other the shameful reality of the way the Wellses were treated for assisting the Aboriginals in this hugely significant event has been overlooked. 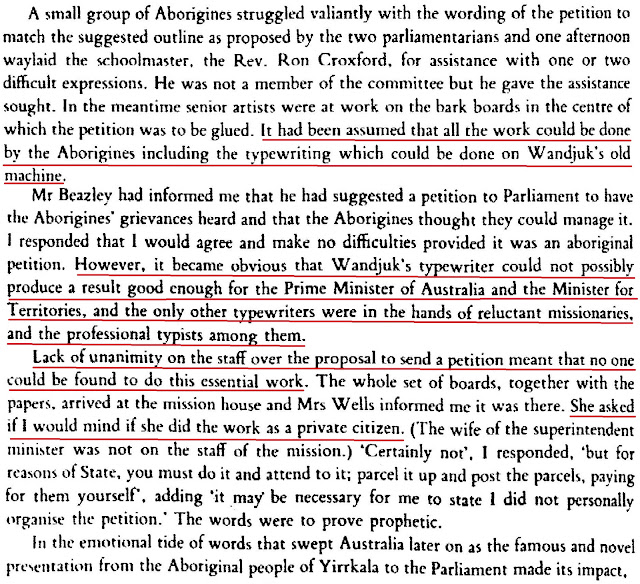 The relevant passage from Wells' book
Reward and Punishment in Arnhem Land 1962-1963
Edgar Almond Wells was born in Lincoln in England in July 1908. By 1930 he was a Methodist minister in Pinnacle, west of Mackay in North Queensland. He was then sent further west to Camooweal, then back to Charters Towers. After World War II, now married to Annie Elizabeth, he was in Haberfield in Sydney, but was soon sent north again, to Crows Nest on the Darling Downs. After being expelled to Brisbane, in the 1970s the Wellses moved to Margate and finally settled in Point Vernon in Hervey Bay. 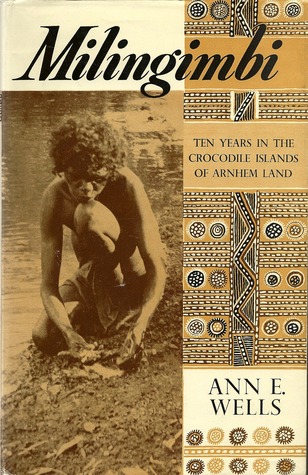 Edgar's wife is best known as the prolific author and poet Ann E.Wells. She wrote 60 works, many of them about Arnhem Land. Annie was born in London in 1906 and arrived in Australia in 1910. She was educated to tertiary level in Queensland and then trained as a nurse. Annie identified closely with the Indigenous people, learning some of their dialects and studying their traditions. She wrote the poetry collection Lepers (1952), the autobiographical Milingimbi: Ten Years in the Crocodile Islands of Arnhem Land (1963), This Their Dreaming: Legends of the Panels of Aboriginal Art in the Yirrkala Church (1971),  Daybreak, Stars in the Sky and The Dew-Wet Earth (all published 1973). She died  in Point Vernon on Christmas Eve 1979 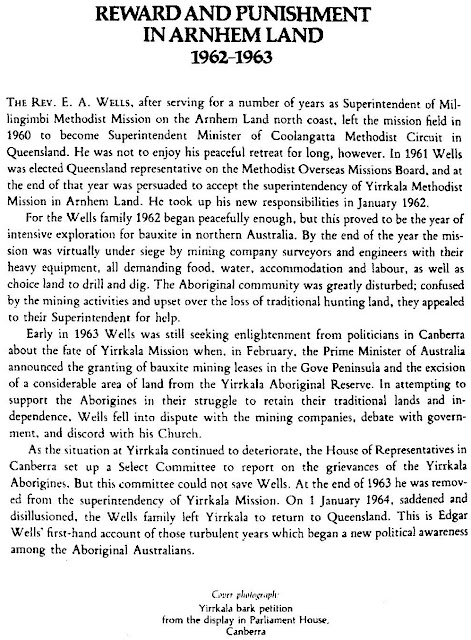 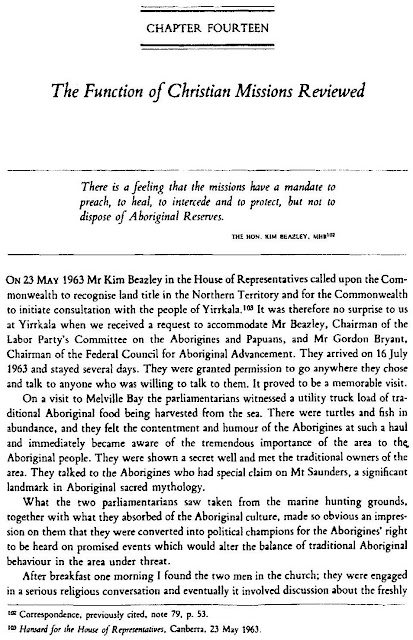 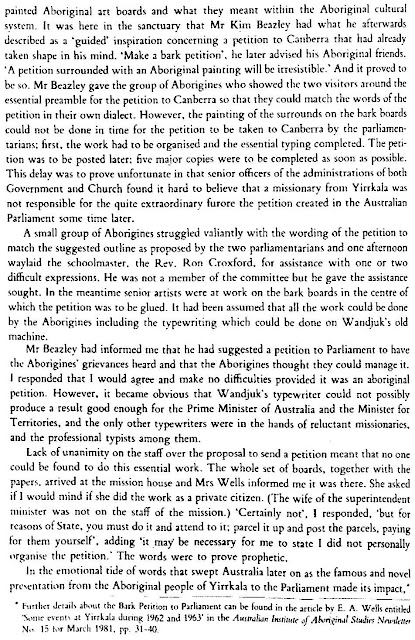 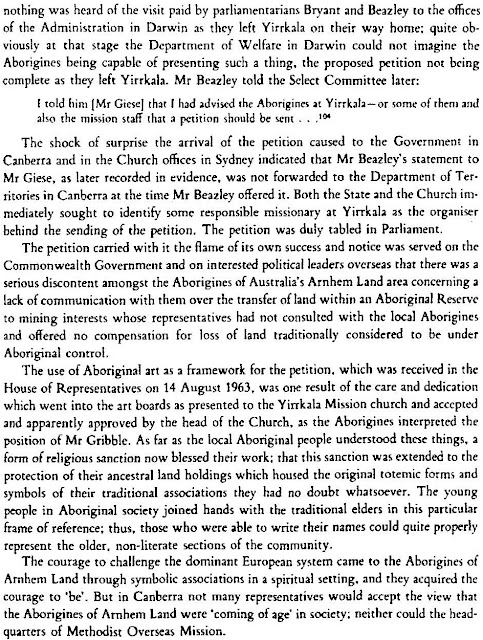 The Yirrkala Bark Petitions were presented to the Australian Government in August 1963, signalling a start of the 30-year struggle for the recognition of Indigenous Land Rights in this country. It was a move which led to the Mabo decision.
Given the very encouraging comments from Ryan Adney, Rob Bowker and Richard Polt to my first post about this event, I decided to return to the subject, with the results of some further research into the typewriting of the documents. 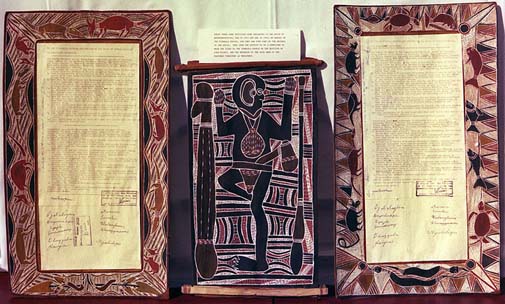 At the time I was alerted to these 50th anniversary celebrations, by my friend Aaron Hall, Aaron also pointed me to an extract from Edgar Wells' book. This was a chapter from the book titled "The Function of the Christian Missions Reviewed".
On a closer reading of this extract (Aaron had directed me to page two of the chapter, in particular) I discovered that a very widely broadcast article about Wandjuk's typewriter had misinterpreted Wells's description of what had actually happened.

The Yirrkala Bark Petitions protested against the Australian Government's removal of 300 square kilometres of land from the Arnhem Land reserve so that bauxite found there could be mined. The 50th anniversary is being marked as part of  National Aboriginal and Islander Day Observance Committee (NAIDOC) Week.
NAIDOC week co-ordinator Rosealee Pearson said what the Arnhem Land leaders achieved at a time before Indigenous Australians were even counted on the national census cannot be overstated. "It's pretty astounding that a group of people who weren't even counted as human beings decided to do that," she said. "It's because of them and the fight they fought that I exist as a person." 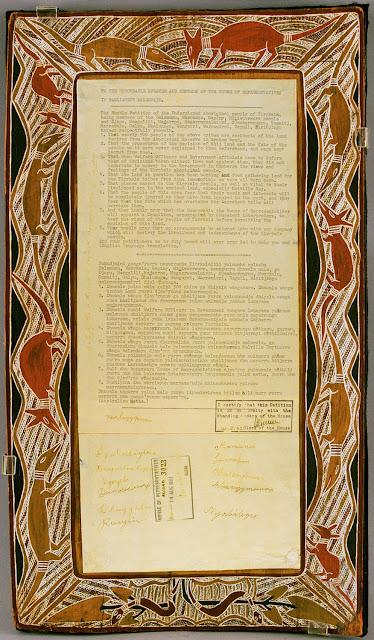 The ochre-framed bark petitions were adorned with the clan designs of all that was threatened by mining - from the snakes to the sand dunes. They were first traditional documents to be recognised by the Australian Parliament.
Ms Pearson said the combination of traditional and modern forms of communication [typewriting] helped bridge a gap between the two cultures at the time.
In 1968, a referendum was held and the Australian Constitution amended to count Indigenous Australians in the national census. Less than a decade after that, the Northern Territory Aboriginal Land Rights Act was passed.
Prime Minister Kevin Rudd, in East Arnhem Land for today's celebrations,  said he believes Indigenous recognition in the Constitution can be achieved under a re-elected Labor government. "My timetable is we should be in the business of bringing constitutional recognition for the first Australians as soon as possible," he said in Darwin yesterday.
The Equal Rights and Responsibilities for Aboriginal People bill was drafted in September 1971 and dealt with a situation in which Aboriginal Australians were denied democratic rights. They were excluded from the census, basic wage rulings, the pension and other benefits. The 1968 referendum gave the Federal government a clear mandate to implement policies to benefit the Aboriginal community. This typewritten document was an attachment to the cabinet decision: 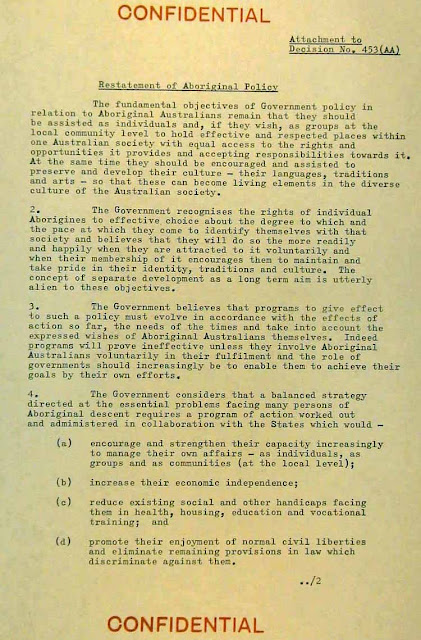 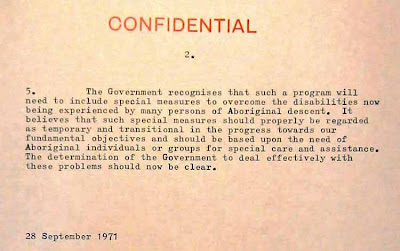 Under this law, Aborigines were given the right to practise their ancient customs. Under section two of the act, Aborigines were encouraged to maintain and take pride in their identity and were also allowed to speak in their native language.

Posted by Robert Messenger at 17:09

We have so many dark tales of our history, of which we seem determined to pretend don't exist. Great work on the research though. At least we know what hands wrote the typewriter.

Bulimba - even back then, would have been such a different place to be sent back to from there.

Actually, the only newspaper article I have seen that has discussed the petition this week, has been from an overseas publication.

Much of the Queensland press is caught up covering the government trying to secure themselves a 41% pay increase and passing laws which better facilitate corruption. Ironically SBS World News did quite a good piece on the bark petition.

I've been enjoying these thoughtful and well-researched posts about the gradual awakening of recognition of the rights of the aboriginal folks of Australia, following their being trampled along with their ancestral lands with the coming of the white folks. Same here in the US, of course. I think we called it something like "manifest destiny". Now that they have been completely overrun and decimated, it is politically and economically OK to apologize, etc. (I love it that they are now stealing back from us via casino gambling!)

The truly courageous, though, were people such as Annie Elizabeth Wells and Edgar Almond Wells, who knowingly risked their careers and respect among the white culture by pursuing what they recognized as the morally right path.

Thank you Scott, Steve and Tony for your comments. Steve, I did catch that SBS piece. Tony, you've hit the nail squarely on the head: Other that what I posted last night, you will not find a single thing on the Internet about the Wellses. They have been airbrushed from history. Typical! The true heroes in such events are the ones hardly ever recognised for what they did. This is yet another classic example.