The "Secretariate": A Case of a Good Companion for the Imperial Portable Typewriter 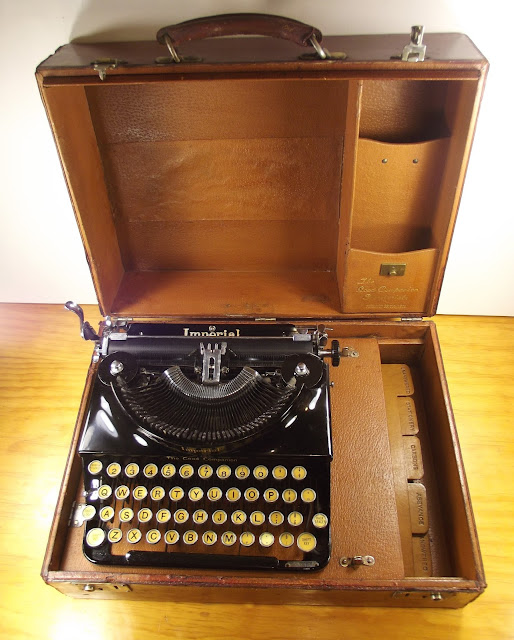 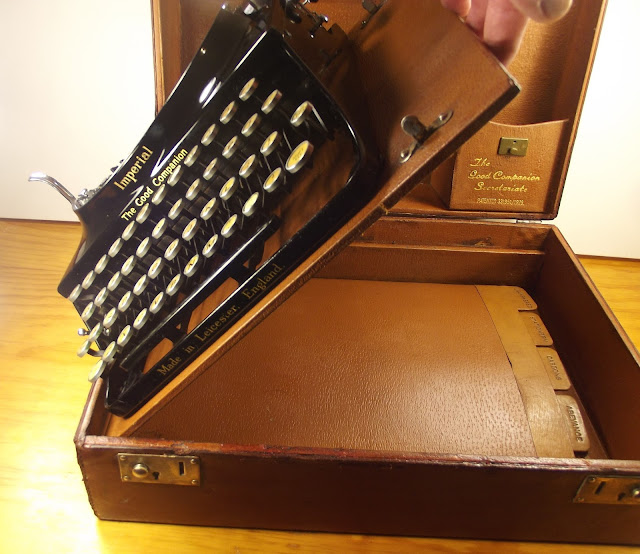 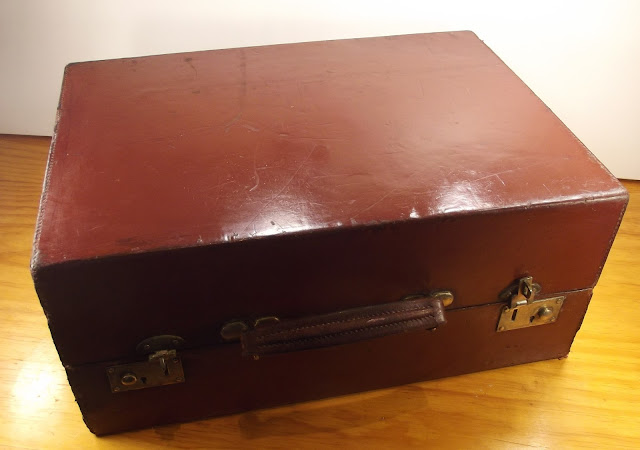 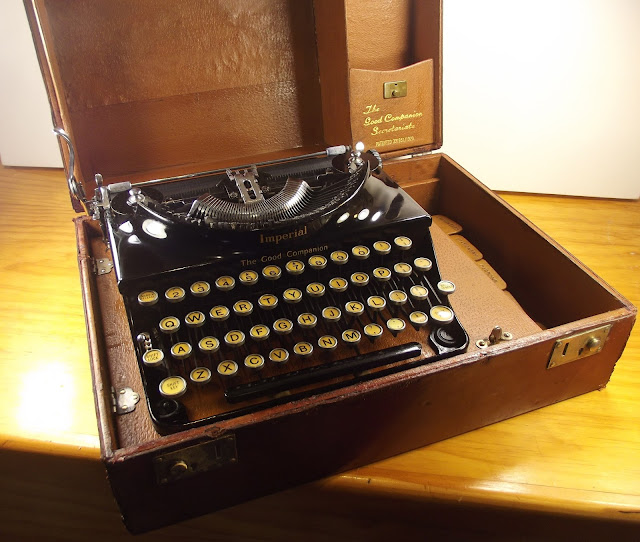 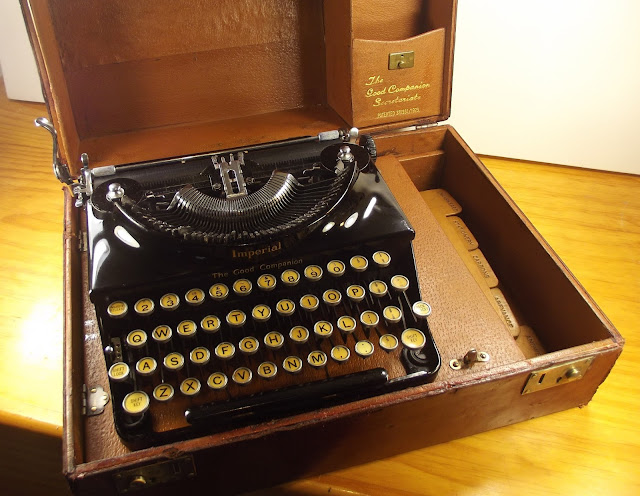 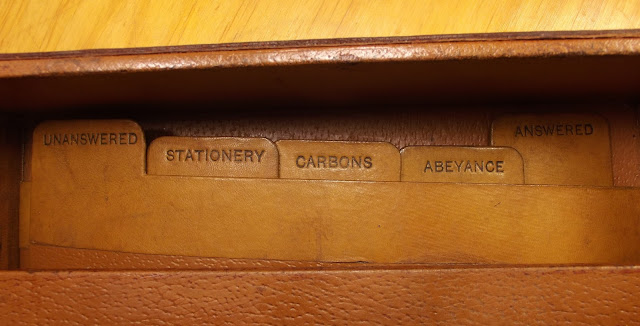 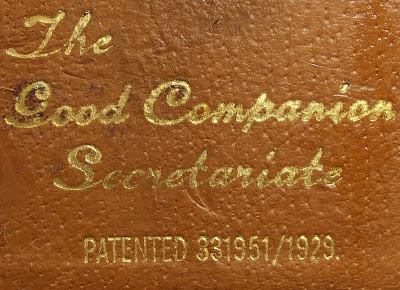 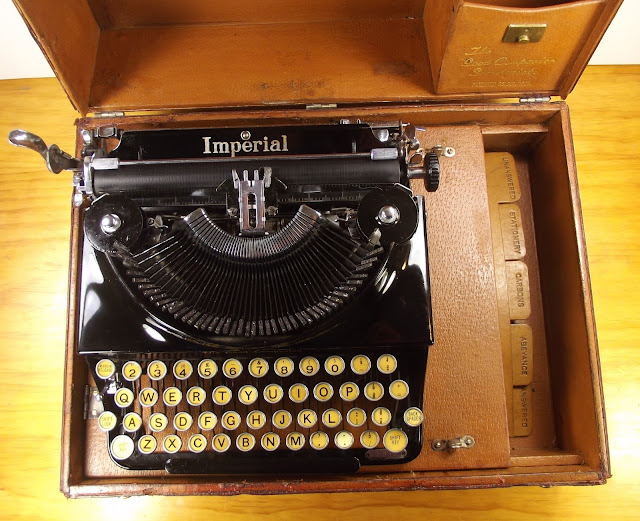 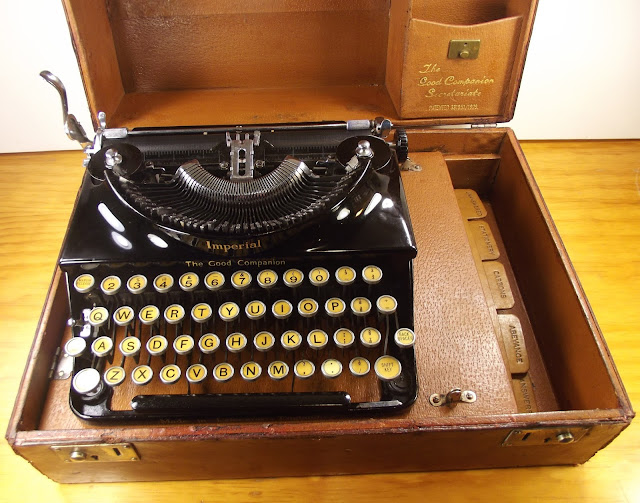 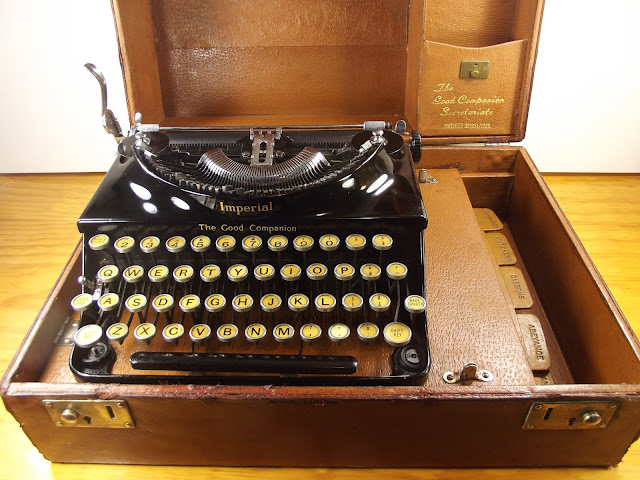 I first became aware of these cases when a year ago Carole Tozer in Queensland sent me images of the Baby Empire which had been used by her father, Victor Anthony Ricketts, on his record-breaking around-the-world flights in 1938. The story of Victor's typewriter and case can be seen here. In the case (pun unintended) of the Baby Empire, this was called a "Traveller's Model De-Luxe", but it's the same design with the same 1929 patent number as the Imperial Good Companion Secretariate. 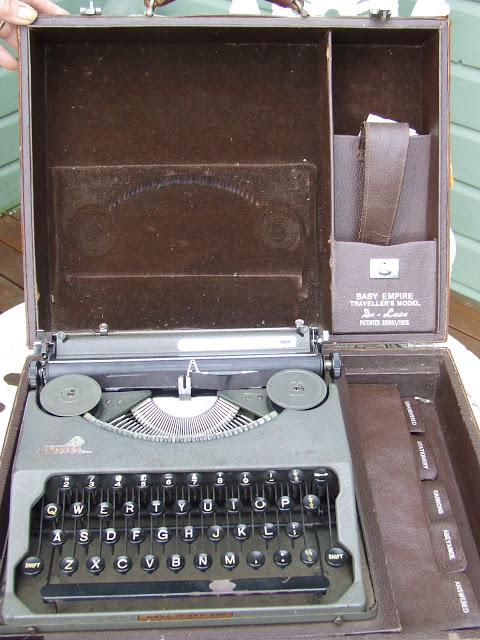 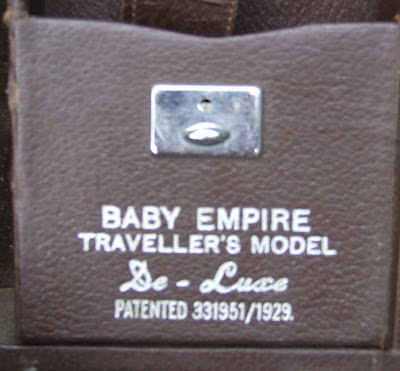 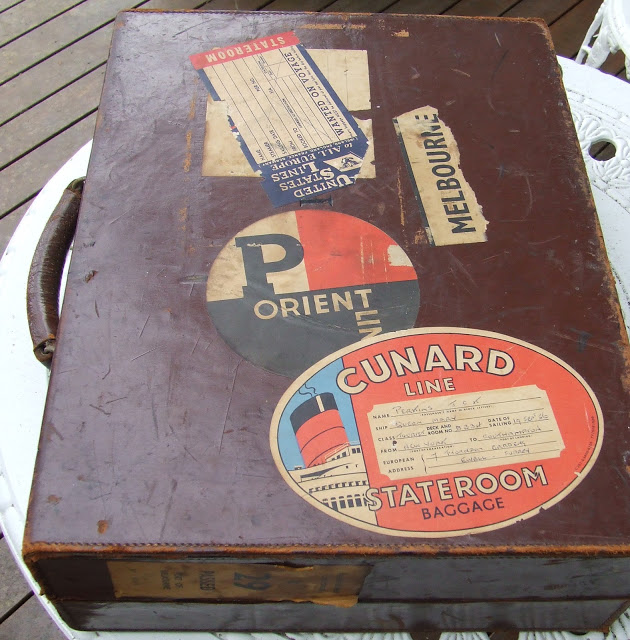 Having lusted after this case (not to mention the Baby Empire in it) for 12 months, the chance finally arose to own one when this Imperial Good Companion and its unusual case were listed on Australian eBay. So I snaffled it.
The typewriter is in very good shape but the case needed a lot of work. I have cleaned and polished all the surfaces, including those of the correspondence and stationery inserts. I had to repair the tongue-and-grove edge joints all around, as well as the very serious scarring of the vinyl lining inside the top of the case. The damage in each case (pun unintended) seemed to have been caused by not placing the typewriter properly inside the Secretariate - as the sides of the case had been forced out from their joints and the top of the typewriter had scarred the lining. But I think that after many hours of work on this, it has come up looking a treat.
I imagine the sleeves on the right side of the top were used for pens, pencils and that sort of thing (maybe also spare ribbons). But one thing still leaves me a bit mystified: the two clasps on the right side of the fold-up board on which the typewriter sits. These do not appear to be in the Baby Empire case. They are not for spare spools. Perhaps they were used to draw up and hold up the board, although that doesn't seem feasible. Maybe they are there to fit another size of typewriter (such as the Baby Empire/Hermes Featherweight) - although one would imagine these cases were custom-made for different brands.
I'd loved to know who designed it, but can find no trace of the patent No 331951/1929.

Posted by Robert Messenger at 13:52

Oh my gosh - that case is wonderful. Upon seeing it a woodworking project instantly came to mind. Or perhaps an adaptation of a vintage suitcase. I love the "Abeyance" tab. There's the reason the corners of your case were blown out and the inside of the top scratched by the machine pressing up against it! Subject to my chaotic approach to paper handling, it would have been filled to overflowing.

Those cases are wonderful! I wonder why they are so scarce. Seems they would have been very popular.

I did not search, but I remember seeing some one else with a nice case for an ultra-portable. Seems to me it was on your blog or Richard P's blog.

I may try my hand a making a similar case. I believe a sheet of nice birch ply wood and some hardware from Rockler and I would have a nice week end project. I doubt mine will have the neat leather embellishments. No leather shops that I know of in these parts of Florida.

Thank you Tony and Bill. I'd really love to see one or either you making one of these, it would be fabulous.
Tony, spot-on about paper handling - one of my biggest crimes too. But I most admit I hadn't thought of that - it is a distinct possibility!
Bill, couldn't agree more about their rarity. I think you may be referring to John Lambert's Groma Kolibri or Gossen Tippa case, which Richard saw on a trip to New Haven earlier this year. Claudia Tan has shown a similar Groma/Gossen case on Facebook.

Good snaffling!! That looks great, you've done an excellent job of restoring it.

Also worthy of note is this deluxe case for the Remington Noiseless Portable.

Bloody gorgeous! I can imagine the effort put into the woodwork and then the leather. But elbow grease well spent! I wondered about those two clip-type things. Still scratching my head though. I think the one you are referring to in Richard's blog is his pal with an Aristocrat in a fitted soft case.

Such a magnificent setup! So beautiful.

Thanks for sharing these. I wish I had spotted them myself on eBay! Sometime, it just pays to check out the case as well.

Very beautiful! I have lust, and may start looking for a suitable well-traveled briefcase for my own project. :D

I think perhaps the deep but skinny pocket on the right of the lid may have been for envelopes and stamps?

I think the reason these cases are so rare, is the same for other leather cases (like for school books). Not taken care of for a while and just thrown out. It's a shame...

I HAVE THE SAME TYPEWRITER WITH THE CASE! :)