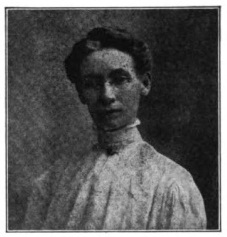 Mary E.Orr
If you go to Google Search and key in the words "first woman"+"board of directors" YOU WILL GET THE WRONG ANSWER!!!
You will be told Letitia Pate Whitehead Evans (1934, Coca-Cola) or Marjorie Merriweather Post (1914, Post Cereal) were the world's first female directors of major corporations. They were NOT!
THE CORRECT ANSWER IS:
Mary E.Orr (Remington Typewriter Company) - and the year: 1907.

*555 Edgecombe Avenue, where Mary Orr was living when she died on January 25, 1936, is now known as the Paul Robeson Residence and the Roger Morris Building. It is a National Historic Landmarked building in Washington Heights, Manhattan, New York City. It was the home of Paul Robeson. For the first 25 years of its existence, until 1939, this building was restricted to only white tenants. Later, Count Basie and Joe Louis also lived there.
**Mary's only adult sibling, brother William, died in 1911.

Not alone was Mary E.Orr the first woman anywhere in the world to be appointed a director of a major international corporation, she was also recognised in 1888 as the world's first speed typewriting champion! 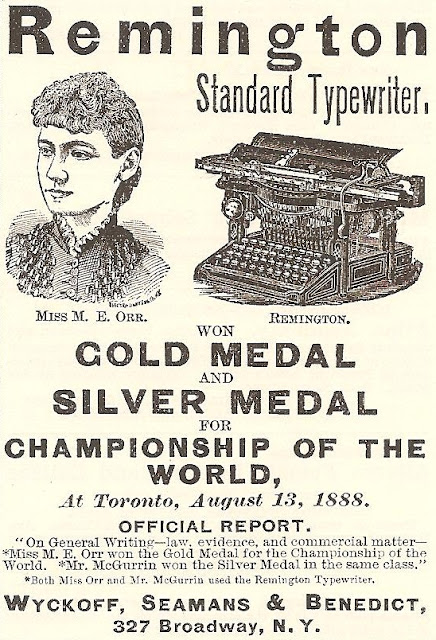 How come, I must ask, does the world know so little about this incredible, pioneering women?
Well let me tell you what has never been previously published - anywhere.
Mary E.Orr was born in Brookfield, Madison County, New York, on August 20, 1866. She was the daughter of Joseph Orr (1829-), an Irish-born New York iron moulder who served in the Civil War and moved to Edmeston, Otsego, just after Mary was born, to become a farm labourer. Mary's mother, Florilla Orr, was born of Irish parents in New Jersey in October 1837.
As New Zealand newspaper The Star, in its page three Woman's World column on February 29, 1908, reported (see clipping above) - Mary E.Orr was not like Marjorie Merriweather Post; she did not have a filthy rich father, or marry a banker or a financier or a lawyer. Unlike Letitia Pate Whitehead Evans, she was not born into Virginia's landed gentry, or marry an attorney. Unlike Nellie Bly, Mary did not marry a millionaire manufacturer. Indeed, Mary E.Orr never married. She was the daughter of a farm labourer, she came from ordinary working folk, and she got ahead in life through sheer dint of her OWN HARD WORK!
It's time the world saluted MARY E.ORR for what she achieved. She was years ahead of her time - seven years ahead of Post and Jeannette Rankin, of Montana, the first woman to be elected to the US House of Representatives, and 27 years ahead of Whitehead Evans.
Mary Orr was also 10 years ahead of Kate Gleason, the first woman president of a national bank, 60 years ahead of  Muriel Siebert, the first woman to own a seat on the New York Stock Exchange and 65 years ahead of Katharine Graham, the first woman CEO of a Fortune 500 company, and Catherine B. Cleary, the first woman director on General Motors' board of directors.

Marden was an American spiritual author in the New Thought Movement and founder of Success Magazine. The article referred to here was titled "Little Life Stories - Miss Mary E. Orr, the First Woman to Become a Director in a Big Corporation", written by Claudia Q. Murphy, which appeared in Success Magazine in December 1907. 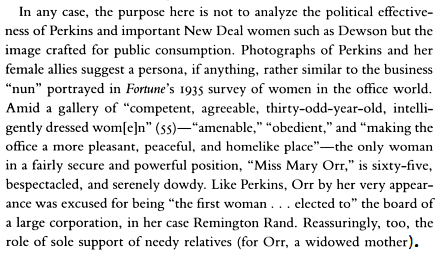 What makes matters much, much worse is that what has been written about Mary E.Orr is about 85 per cent wrong! Many references to her even get her name wrong. She was NOT Mae Orr (regardless of what her signature below may appear to suggest) or May Orr, her name was Mary Orr. 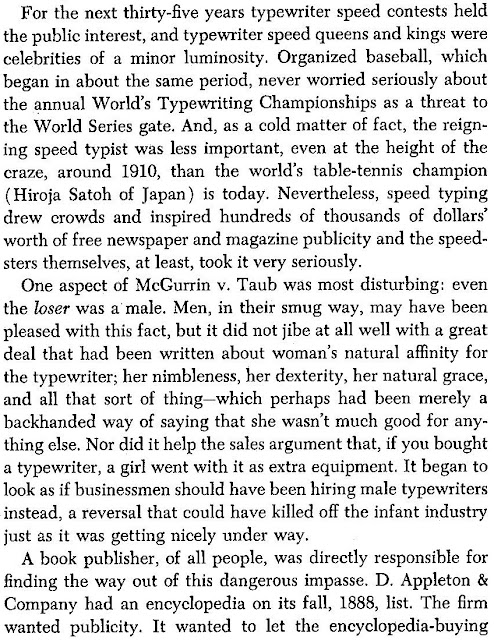 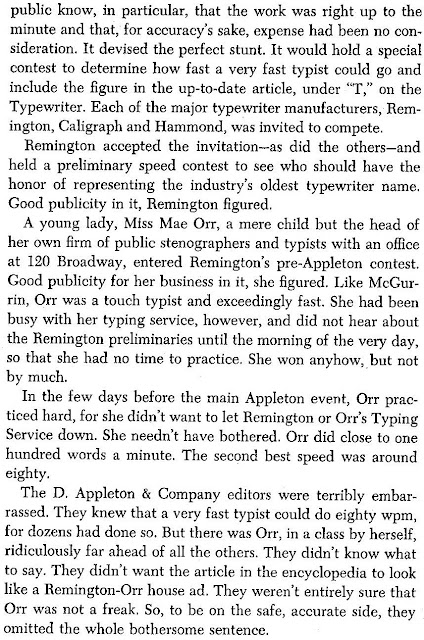 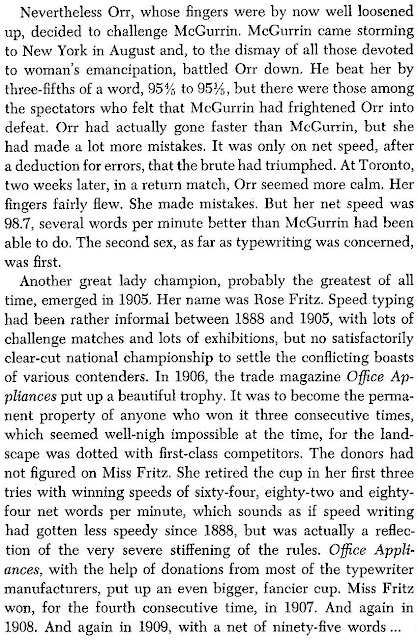 This, mostly nonsense, was published in The Wonderful Writing Machine, written by Bruce Bliven Jr and commissioned by the Royal Typewriter Company to mark its 50th anniversary in 1954:
1. Mary ("Mae") Orr was not "a mere child" when she won the world speed typing championship in Toronto on August 13, 1888. She was instead a week short of her 22nd birthday.
2. She was not "the head of her own firm" but was still at Syracuse University until she joined Remington. At that time she lived at 623 Irving Street, Syracuse, and was an active member of the university's Aesthetics Society.
3. She was not a touch typist. Orr typed two-fingered.
Contrary to what Bliven might have had readers believe, Orr's win at the 1888 Typewriters' Congress in the Convocation Hall of the Education Department, Toronto, was controversial. The event was a speed typewriting tournament held as a part of Seventh Annual Convention of the Canadian Shorthand Society. Mary Orr used a Remington No 2. 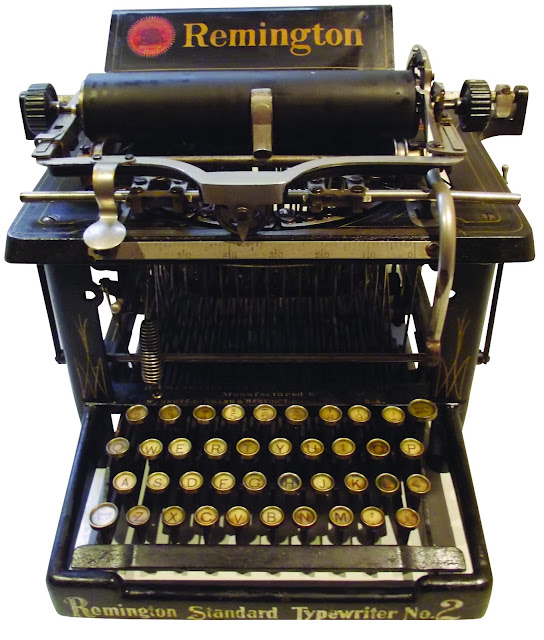 Here is the report from Charles Volney Oden's Evolution of the Typewriter (1917): 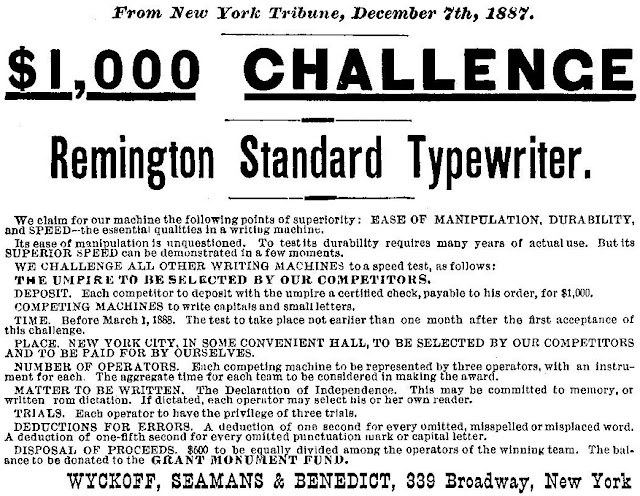 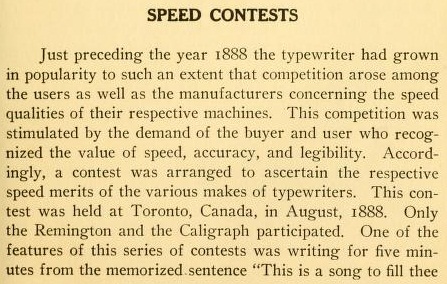 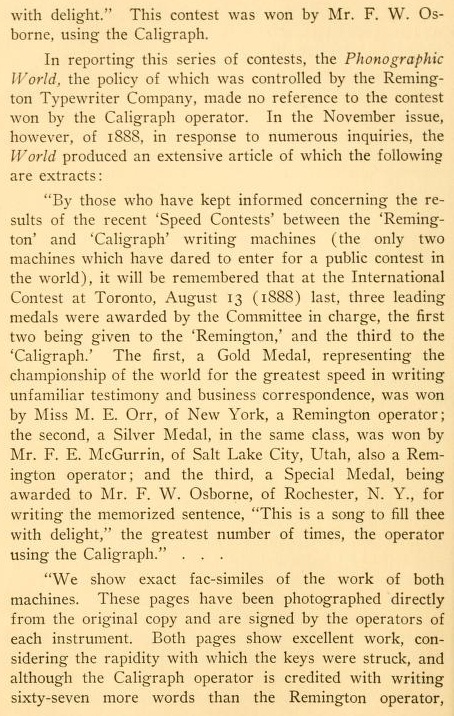 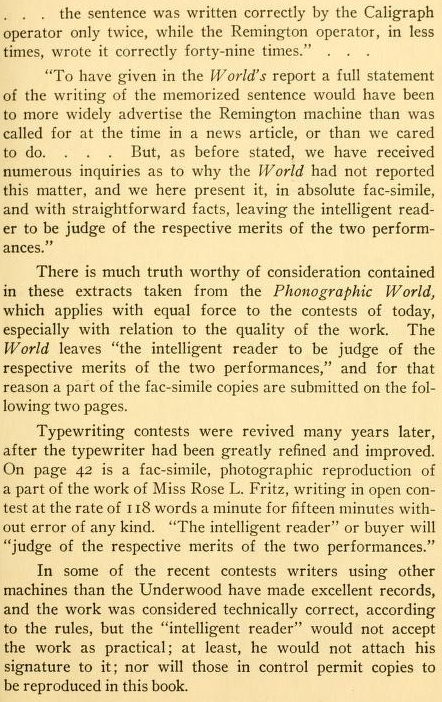 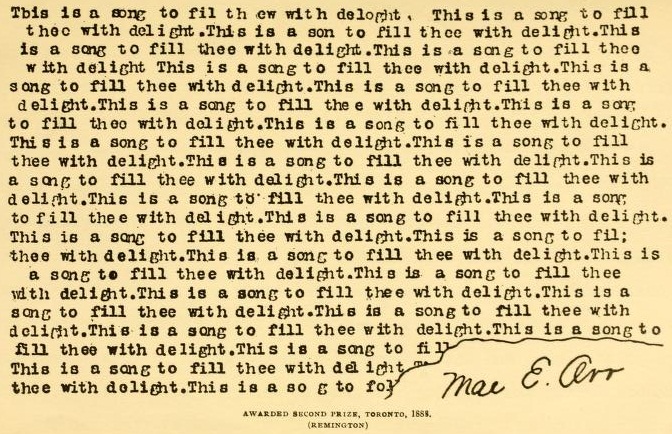 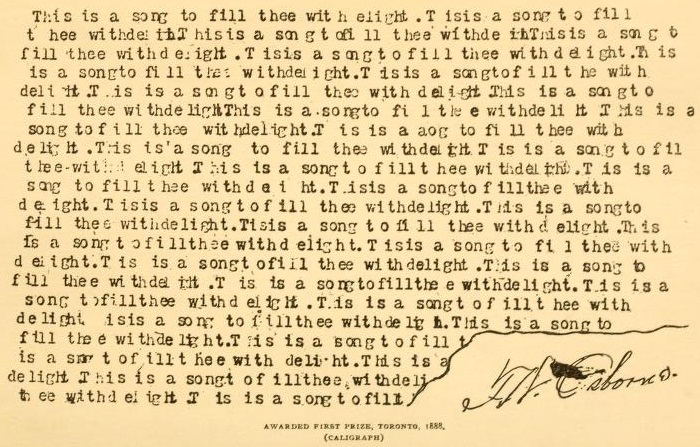 In 1923 Mary E.Orr joined a group of 95 female Good Will delegates, elected from all parts of the United States, who sailed from New York to France under the auspices of the American Committee for Devastated France. Orr was one of four of women representing New York. The women had been chosen by popular vote cast through The Globe newspaper.

Posted by Robert Messenger at 23:13

A very interesting post, as usual. As often is the case, your post inspired me to learn a bit more. A Google search with the words "Mary E Orr Remington" found a Google Books reference to Volume 10 of "Success Magazine", which contains an article or column, "Little Life Stories: Mary E Orr, The First Woman to Become Director in a Big Corporation". Among other information, the piece includes a fine photograph of Orr together with an interview with her. I'll try pasting the huge link: http://books.google.com/books?id=MFgwAQAAMAAJ&pg=PA831&lpg=PA831&dq=mary+e+orr+remington&source=bl&ots=1oOx6e54ib&sig=vRYjcLkzcxBKk2LYsBoHoTqpREU&hl=en&sa=X&ei=rJ3qUf60GsHwigK_t4CIDQ&ved=0CDsQ6AEwAg#v=onepage&q=mary%20e%20orr%20remington&f=false

Amazing a 2-fingered champion speed typist! Thanks for the very detailed article about her.

I remember many of the old news reporters I knew way back when were 2 finger typists that could type rather fast. I doubt any of them won any kind of contest though.