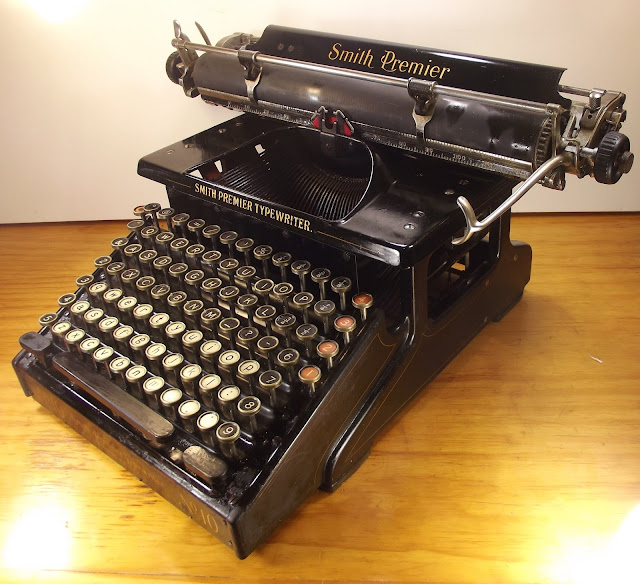 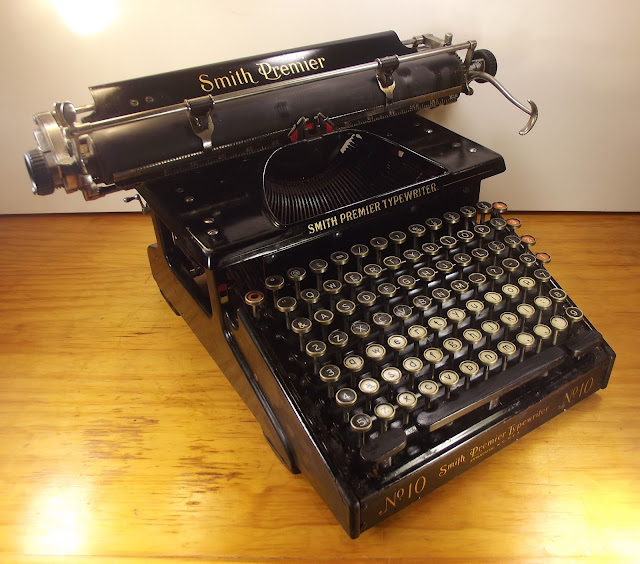 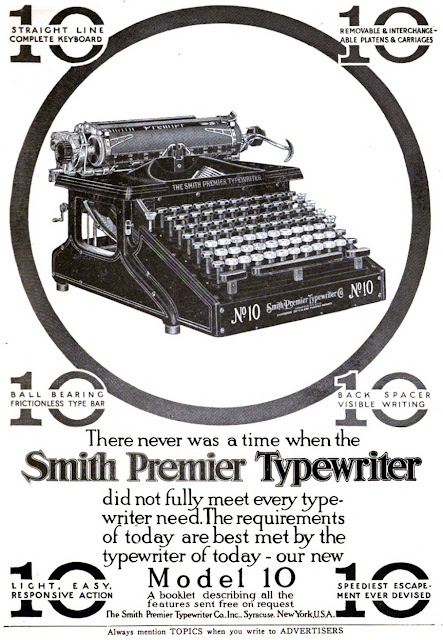 The Union Trust was formed in 1893 to resist the advance of visible writing typewriters, initially the Oliver and then the Wagner-Underwood. On January 27, 1903, the Smith brothers - Lyman C., Wilbert  L., Monroe C., and Hurlbut W. - broke ranks, leaving the family's Smith Premier brand behind them to form L.C.Smith & Brothers. According to this company's history, "The Smiths ... were quick to realize the advantages of the 'writing in sight' principle, but they were unable to convince their associations in the Union [Trust]  [that is, Remington, Monarch, Yost, Densmore, American Writing Machine]. And so they decided to withdraw ... for the production of a 'visible' typewriter." By the end of 1904, L.C.Smith & Brothers had launched just such a machine. 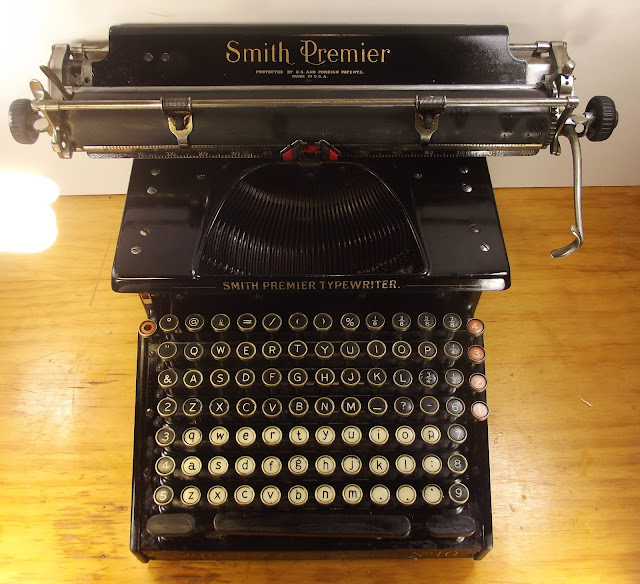 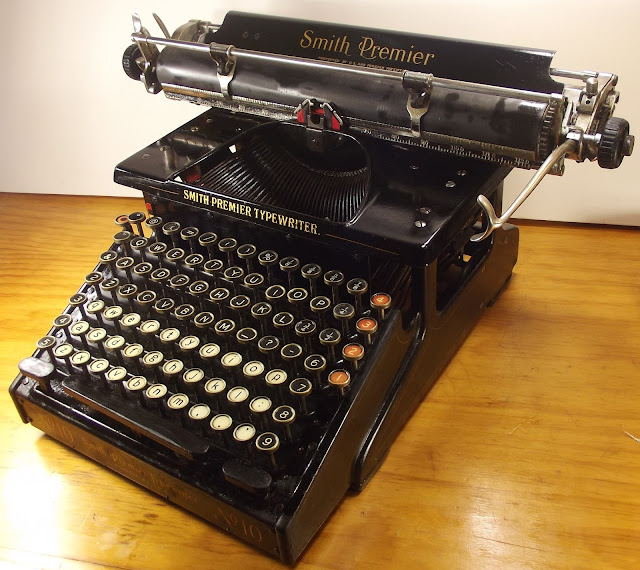 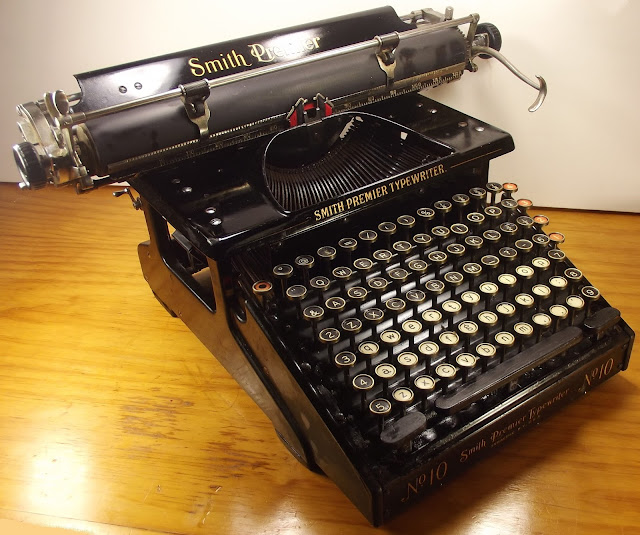 The resignation of the Smiths from the Trust would have been a huge setback for the Union Writing Machine Company (it changed its name in 1908 to the Union Typewriter Company). But in 1909 the Trust still appeared to be in excellent financial health: 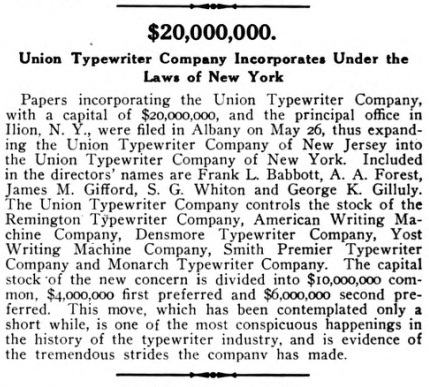 Even before the L.C.Smith & Brothers Model 1 appeared, Trust companies had been sufficiently jolted by the Smiths' resignation to start thinking about going down the inevitable path, and in terms of manufacturing their own visible typewriters.
The Union's No 1 machine designer and mechanical engineer, John Henry Barr, began working on a frontstrike typewriter in June 1904, six months before the first  L.C.Smith machine left that firm's new Syracuse factory. Although Remington, Smith Premier and Monarch were all to use Barr's visible typewriter patents in the following years, Trust companies did not act immediately. 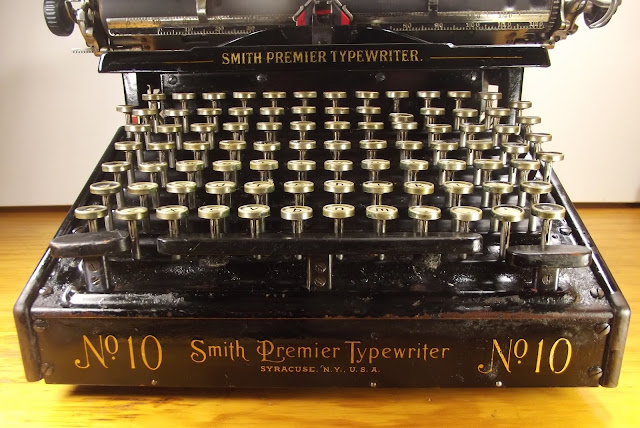 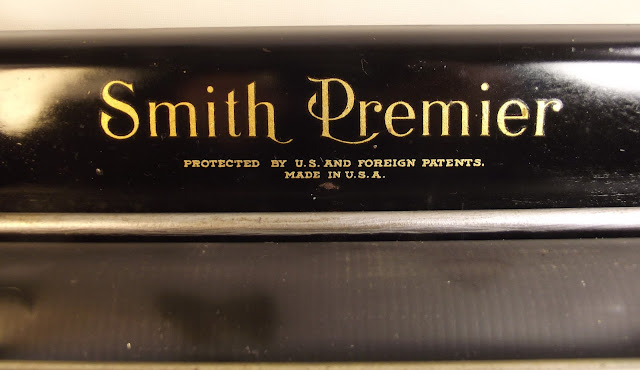 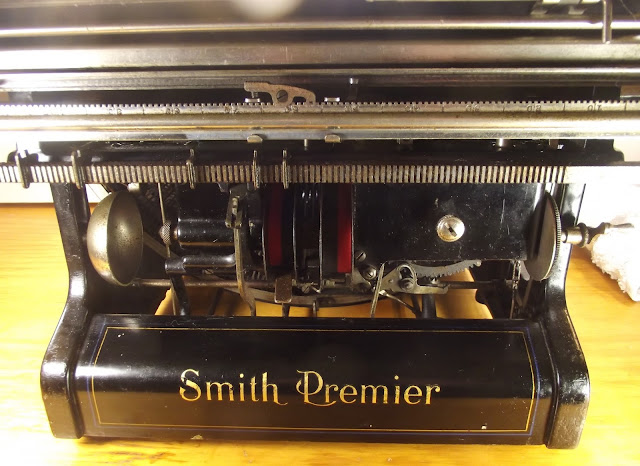 Remington brought out its first frontstrike machine in 1908 (its Model 10) and the Smith Premier No 10 came out a year later. Barr was essentially working on converting the Alexander Timothy Brown-designed Smith Premier to a frontstrike machine, but concentrating on the typing action.
Though Carl Gustav Gabrielson (for L.C.Smith) and Barr (for Smith Premier) were both working in Syracuse, they were developing frontstrike typewriters entirely independently. And yet paramount to both of their designs was the ball-bearing typebar (L.C.Smith were to employ the Levi Gardner ball-bearing design).  In each case, the primary objective for Gabrielson and Barr was the same: fast, smooth typing:

Here is Barr's 1904 design for Smith Premier, followed by a joint final design with Brown patented in 1908. Barr insisted in 1904 that the machine itself was not his design, while he and Brown pointed out the ball-bearing typebar in the 1908 patent was all Barr's work. Note the curved typebar in the joint 1908 patent. 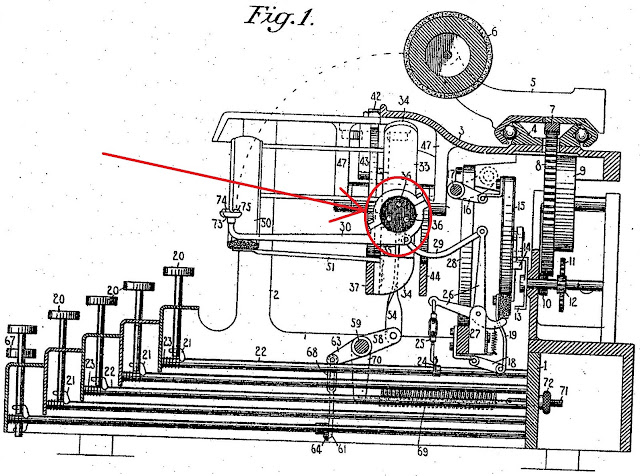 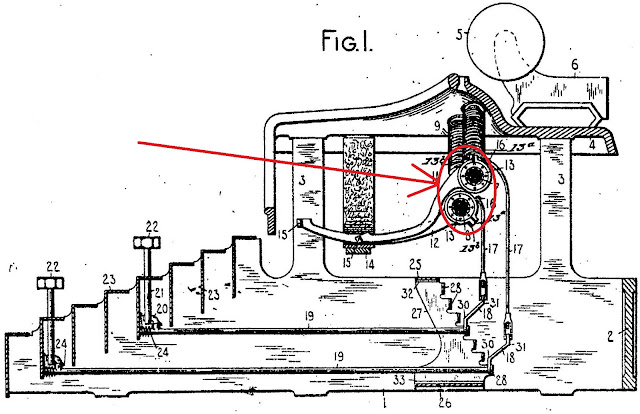 The ball-bearing is very similar to one used by L.C.Smith, the Gardner ball-bearing (still being made today): 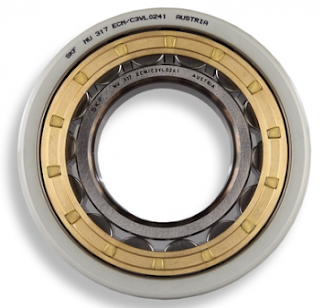 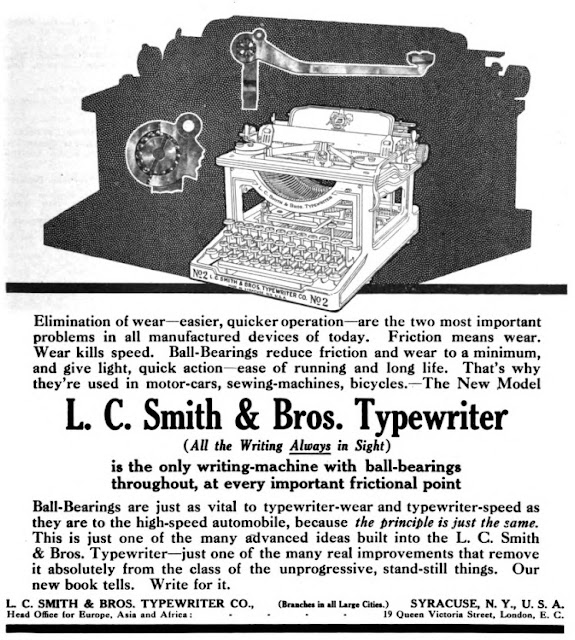 But back to the Smith Premier No 10, an utterly unique typewriter in that it combines the double keyboard (first used by the American Writing Machine Company's Caligraph in the early 1880s) with frontstrike typing: 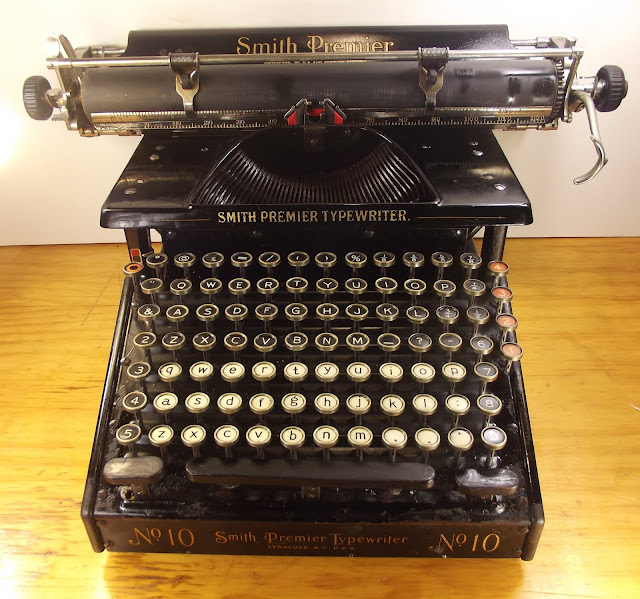 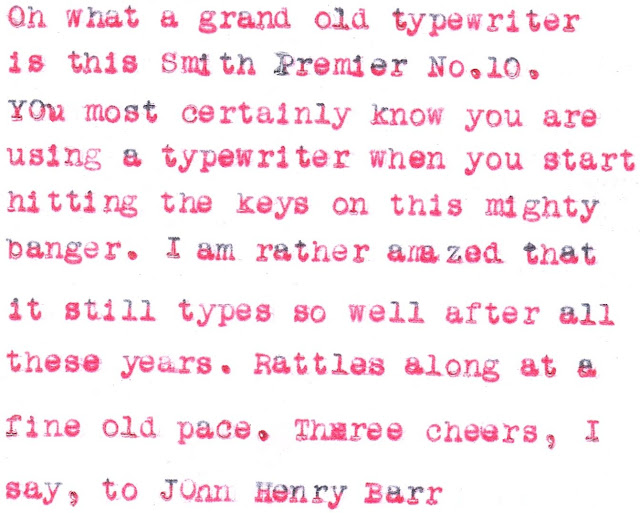 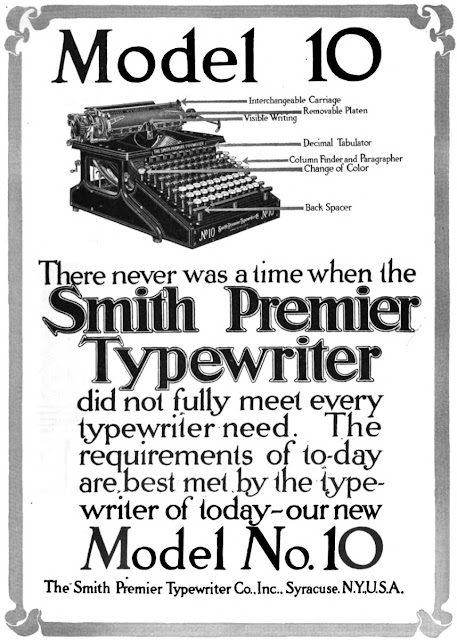 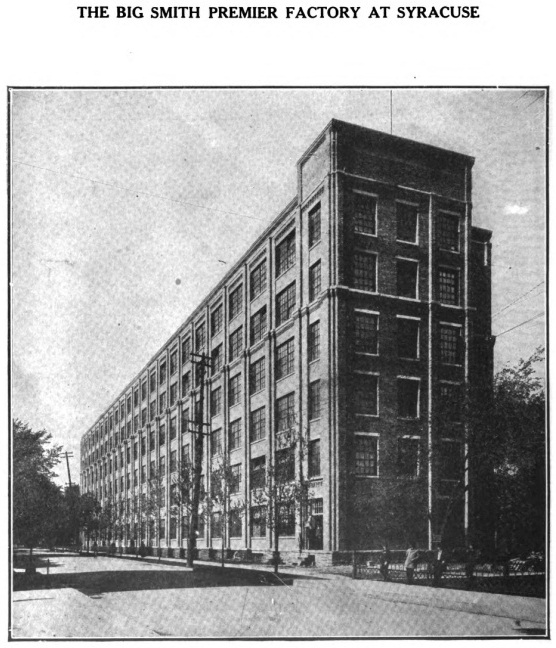 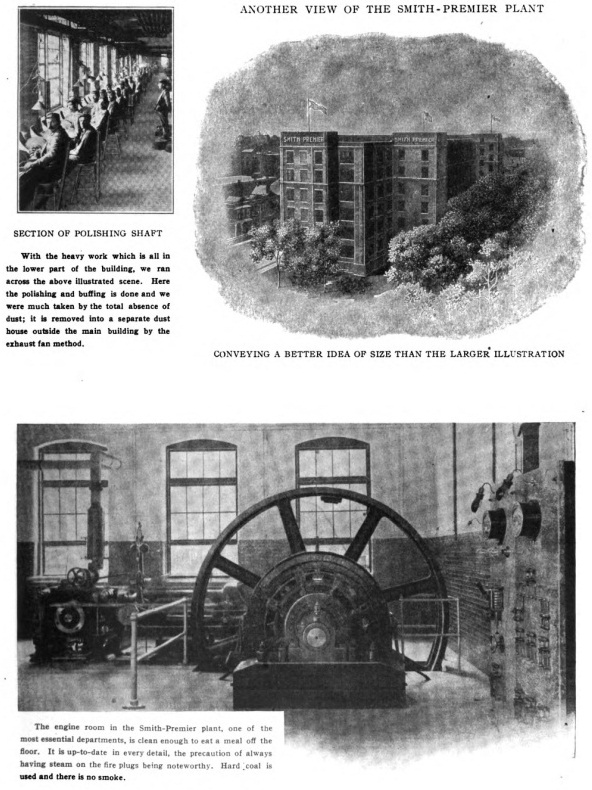 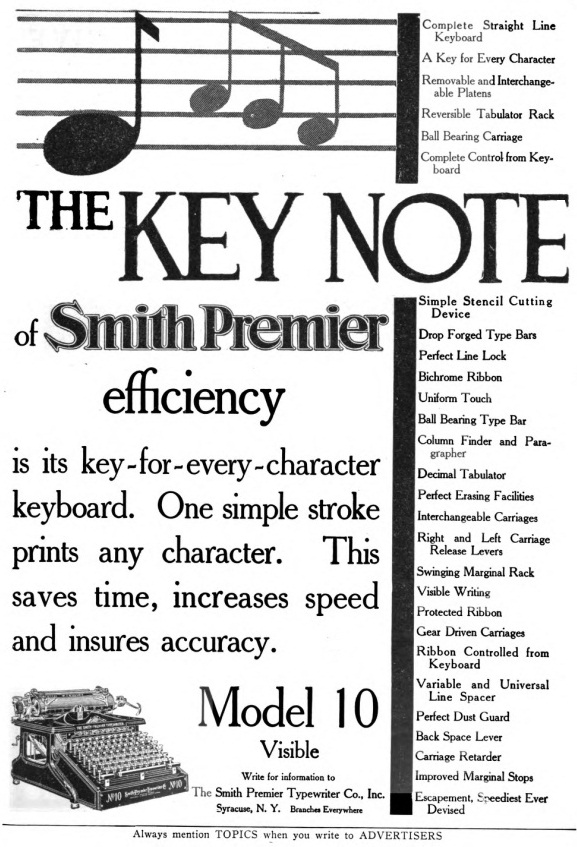 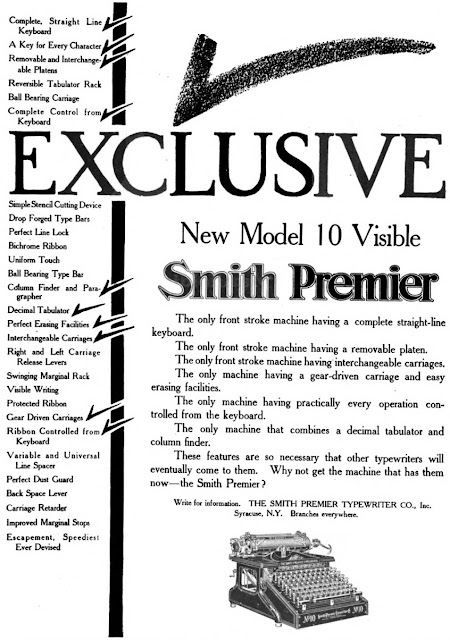 Posted by Robert Messenger at 19:14

Good old Mr. Barr! I didn't realize that he was involved in the SP10.

Beautiful example you've shown us. I have owned a couple, years ago, but they were both in nasty condition.

I love the way the ad copy says that the double keyboard increases speed and efficiency. Maybe not a deliberate lie, but at least wishful thinking.

That really is a great looking SP10. Now... Lets see if I can get my one up to such a standard. Great post too.

Any info on what font is used on the key tops? I need to recreate mine