*To her credit, the seller, on my advice, has now changed the listing to more accurately reflect the truth about this listing. It is no longer listed as the "Nick Charles typewriter" but still points to Ted Munk's blog post.

The 'Nick Charles' typewriter listed for sale on Australian eBay by amandas26 of Sunbury, Melbourne. For a "description and history" of "her" typewriter, amandas26 invites potential buyers to take a look at Ted Munk's November 12, 2010, blog post. Oddly enough, the seller claims her Empire Aristocrat dates from the same year as Ted's machine - 1956! Her machine was originally sold by Holmes & Simcock Ltd in Coventry, England. 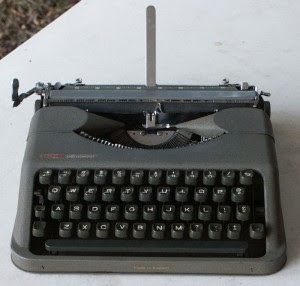 Ted's actual 'Nick Charles' typewriter. I don't know whether he still has it or not.
Posted by Robert Messenger at 10:33

I still have it - it became the Mark 1 Tripod-mounted Field Typewriter this past year, and is most certainly not for sale on eBay right now :D

The same seller linked to Adowa's Triumph Tippa for a sale last week, which I must confess - is now in my possession,