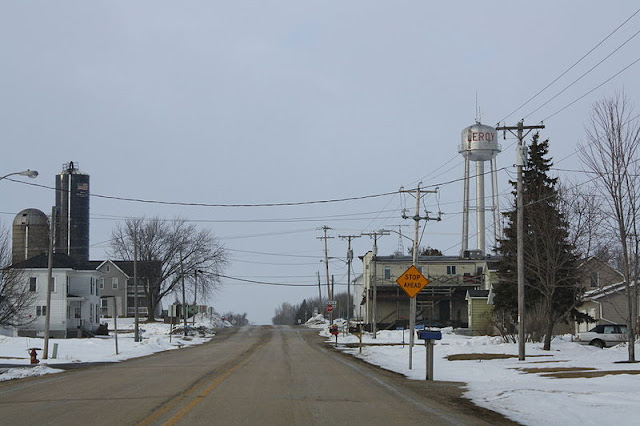 Was the typewriter born on a farm in LeRoy, Dodge County, Wisconsin - population 1121 (July 2009) - and not 48 miles north-west in Milwaukee? 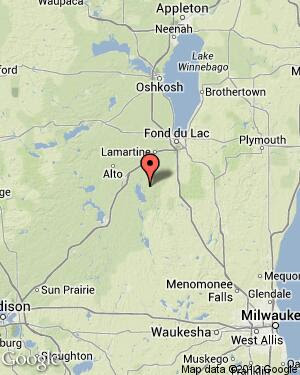 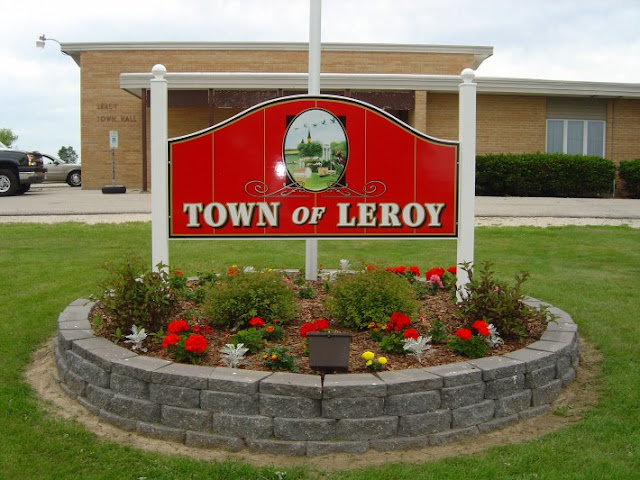 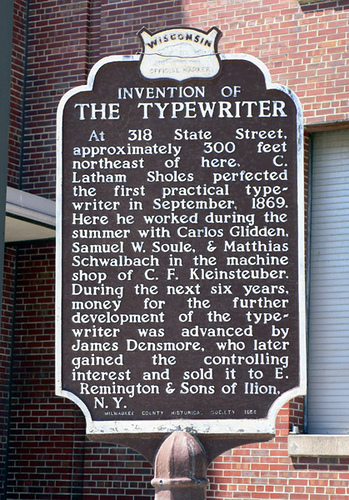 Could it be that the typewriter was first made in such a quaint rural setting as this ... 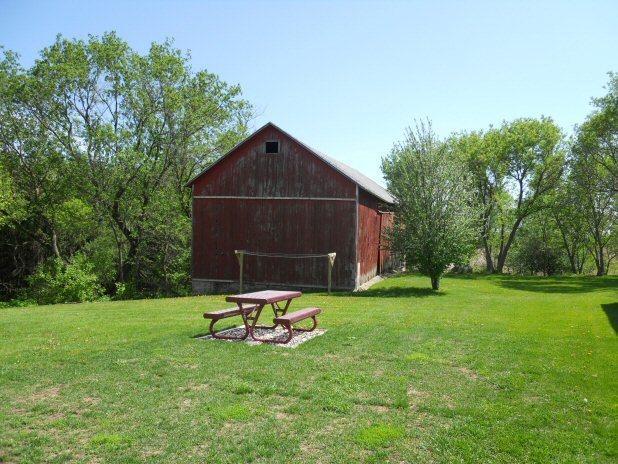 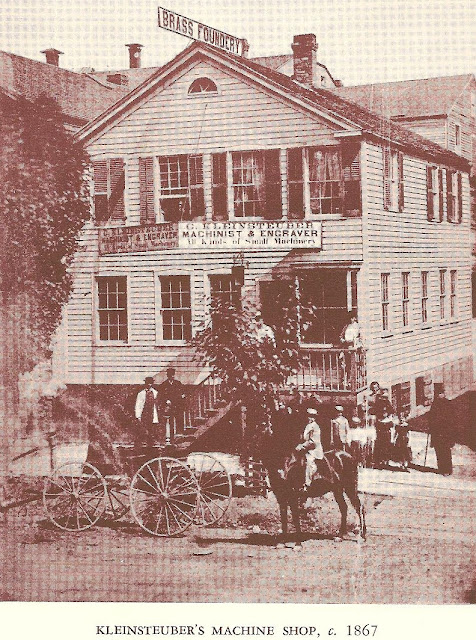 The claim was first made in 1895, 22 years after the typewriter emerged, in this book: 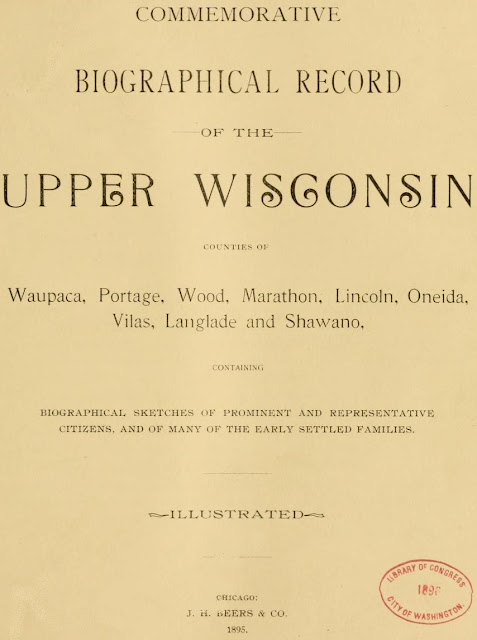 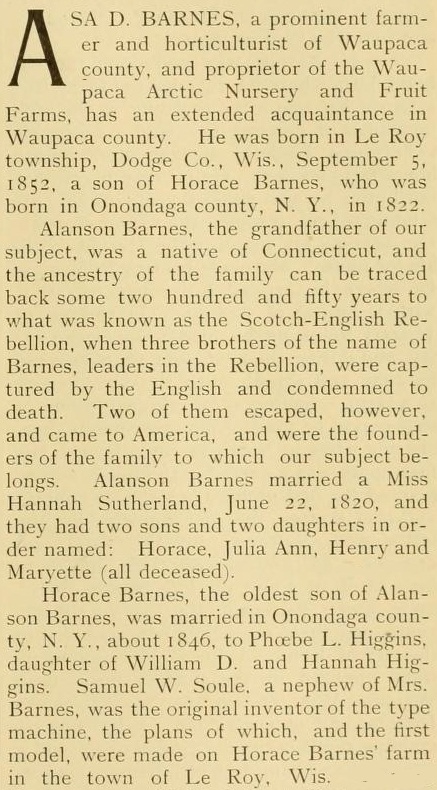 Asa D.Barnes repeated his claims 14 years later, in 1909, when he wrote to Typewriter Topics: 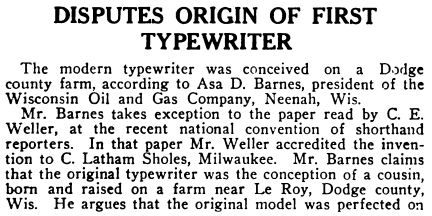 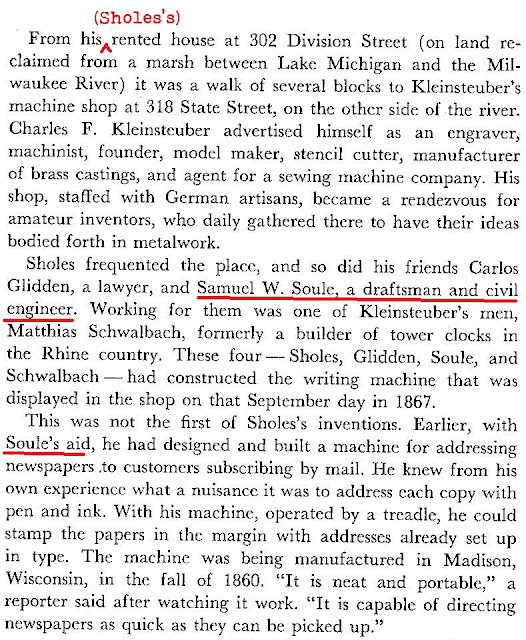 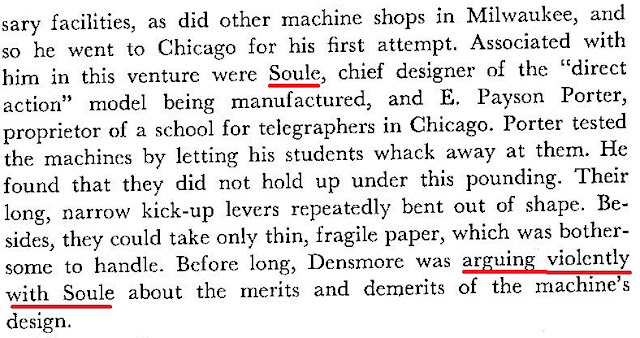 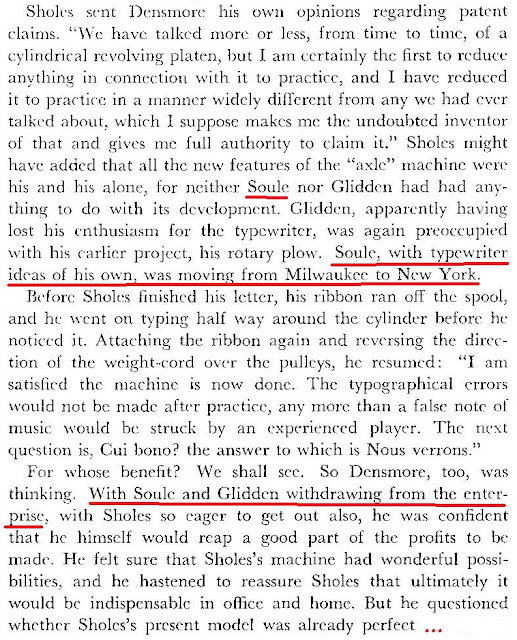 *From Commemorative Biographical Record of the Upper Wisconsin Counties: Waupaca, Portage, Wood, Marathon, Oneida, Vilas, Langlade and Shawano, 1895. ASA D. BARNES, a prominent farmer and horticulturist of Waupaca county, and proprietor of the Waupaca Arctic Nursery and Fruit Farms, has an extended acquaintance in Waupaca County. He was born in Le Roy township, Dodge County, Wisconsin, on September 5, 1852, a son of Horace Barnes, who was born in Onondaga County, New York, in 1822 ...


Horace Barnes, the oldest son of Alanson Barnes, was married in Onondaga County, New York [in] about 1846, to Phoebe L. Higgins, daughter of William D. and Hannah Higgins. Samuel W. Soulé, a nephew of Mrs Barnes, was the original inventor of the type machine, the plans of which, and the first model, were made on Horace Barnes' farm in the town of Le Roy, Wisconsin."

Posted by Robert Messenger at 11:15

Another interesting post. It is amazing how early inventors and inventions clashed. I often wonder if it is the fellow with the best promotion and most money that get the credit for the invention.

What is they about history being written by the victors? A great bit of digging and a reasonable hypothesis... and more notable names for the pantheon.

I personally think that there must have been many inventors of "the first typewriter", but only the Sholes & Glidden design managed to have a lasting relevance because it was the one put on sale commercially through an established manufacturer. The rest, like they say, is history.

I can understand why some towns would have loved to be named "birthplace of the typewriter"; it's like today we saw entire towns bickering for the title of "birthplace of the iPad". The truth is, such title could have boosted the local tourist industry and benefit the residents. But I doubt if that recognition would have benefited the so-called "Inventors" or their heirs...

I give Pellegrino Turri credit as the proven first inventor of a typewriter. But the idea was "in the air" throughout the 19th century (and perhaps as far back as Henry Mill's vague 1714 patent).

Thank you Bill, Rob, Miguel and Richard for your comments.
I do hope nobody has read this post as an attempt by me to promote the idea Sholes stole Soulé's idea.I merely set out to poke fun at what was reported in 1909. By "first typewriter", I am of course referring to the "Sholes & Glidden", the first "typewriter" to be called a "Type Writer", a "Type-Writer", a "Typewriter" or a "Type Writing Machine".

An further fact about Samuel Willard Soule. On January 21, 1867 in Woodstock VT, he married Betsy Call Pelton. On the document, he is listed as living in Milwaukee WI and his occupation is 'patent rights'.