O Flower of Scotland, When Will We See Your Typewriter Again? 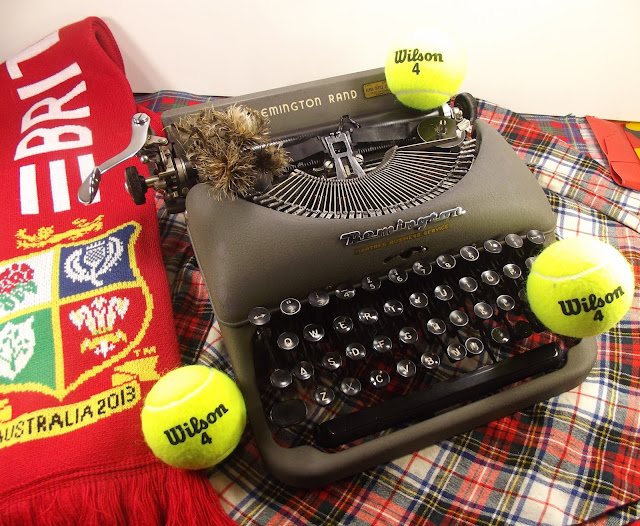 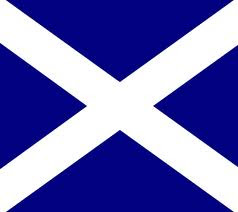 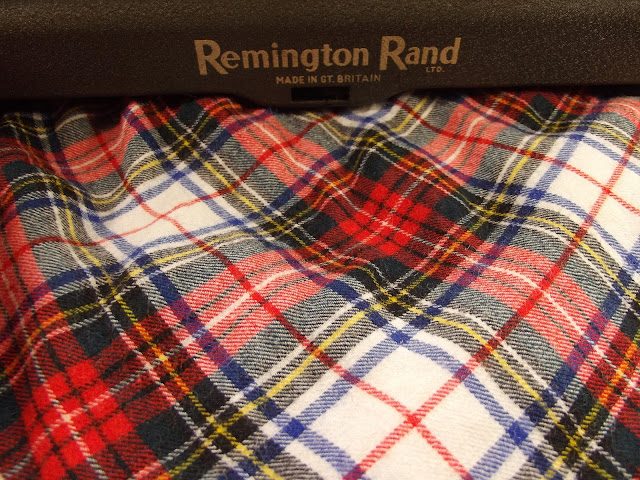 It's not the Murray tartan, I hasten to add! The real thing is seen here: 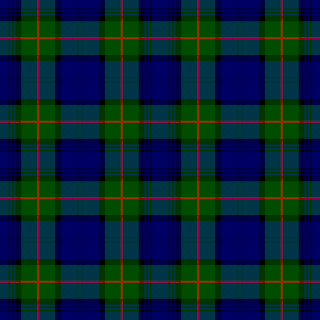 As scant as Richard Polt's interest in sport may be, he can hardly have avoided the saturation coverage given to Murray's triumph by Britain's newspapers this morning - it was splashed all over just about every national daily's front page! (The early edition of the Telegraph was apparently the one exception.) "Arise Sir Andrew, knight of the holy grail" demanded The Times, anticipating Murray will be knighted for his effort. 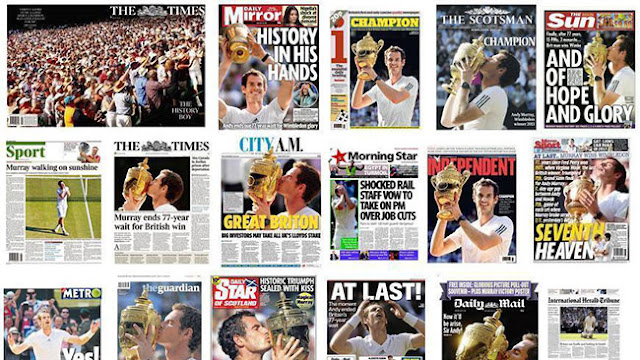 The British, of course, have been saluting Murray for becoming the first Briton to win the Wimbledon men's singles since Fred Perry in 1936 - 77 years ago. But Glasgow-born Andrew Barron Murray is a proud Scot and may put more store on being the first Scottish-born player to win the title since Harold Segerson Mahony in 1896. Mahony was born in Edinburgh but spent most of his life in County Kerry in Ireland.
There was probably more Scottish blood coursing through the veins of Australia's Gerald Leighton Patterson than through those of Mahony. Patterson, who won the Wimbledon title in 19191 and 1922, was a nephew (and best friend) of famous opera singer Dame Nellie Melba, whose family came from Inverarity in Angus, Scotland. I have a fair bit of Scottish blood myself, so naturally I was thrilled when Murray won, thrilled enough to get the Remington out.
One of Murray's greatest supporters is former Manchester United soccer club manager and former Remington Rand Typewriter Ltd Glasgow factory worker  Sir Alex Ferguson, seen here (far right) with the first James Bond, Sean Connery, and Murray's mother Judy after Murray's win in last year's US Open: 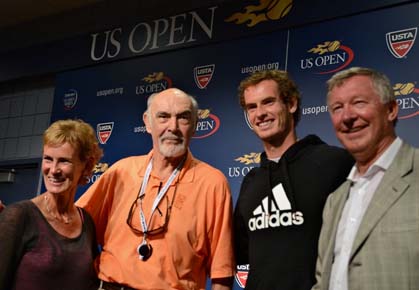 Now that Ferguson has retired from managing Man U,  one rapturous British newspaper columnist has suggested he could take on coaching Murray. Here is the hilarious column, "I've Scot a Plan", from the London Sun.
On Ferguson's retirement from Man U, British newspaper the Daily Mail tracked down some of Ferguson's old workmates from his days at the Remington Rand factory:
"Sir Alex Ferguson's first job was as a humble apprentice at the Remington Rand typewriter factory in Glasgow. But even then he showed signs of the natural leadership qualities he is famous for, asserting himself as a kingpin of the workforce. Gordon Simpson served his apprenticeship alongside Ferguson and says the 71-year-old ... was renowned for his astuteness and ferocious protection of workers' rights. 'Alec was into looking after the rights of the apprentices,' said Simpson. 'There were seven of us who started at the same time and he quickly became the self-appointed leader of us, and was later made the shop steward. If there were any strikes happening, Alec would be right there and he'd tell us the ins and outs of what was happening and the reasons behind it. He was very political and incredibly intelligent. He was destined to be a leader.' 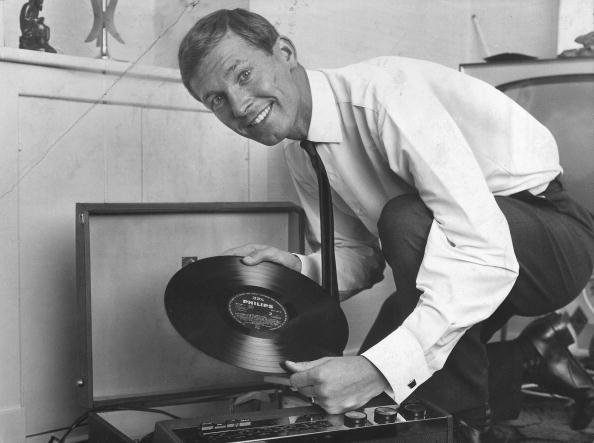 Alex Ferguson, the young Remington Rand shop steward.
"At 16, Ferguson was already playing up front for the Queen's Park first team in his native Glasgow and well known locally. But when he finished his education at Govan High School, his father insisted he took the apprenticeship with Remington. For five years, from 1958-62, the man destined to become the greatest British football manager caught the bus from his tenement home in Govan across south-west Glasgow to [Remington's factory in] Hillington, where he trained to be a toolmaker. Ferguson acknowledges now that his apprenticeship was the making of him, not to mention the place where he met Cathy, his wife of 47 years. 'She was pretty, had a lovely walk and a nice bum, and I made it my business to find out that she was Cathy Holding from Toryglen, near Hampden,' Ferguson has said of his wife ... 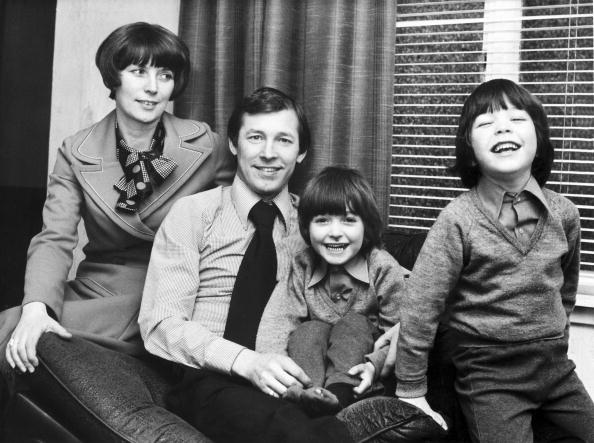 Wife Cathy with Ferguson and their young family.
"Simpson remembers Ferguson as popular among the men at the factory, as a footballer in an area where the game was fiercely supported. 'All the guys were shipyard workers and they could relate to Alec because they were all football maniacs. He was in the papers and could give them stories so they respected him. It was a good social atmosphere at the factory and Alec was a good mixer, although he was very focused on football, even then. Cathy worked in the factory, too, and was a lot gentler than Alec. He kept his private life private and rarely spoke about her.' " 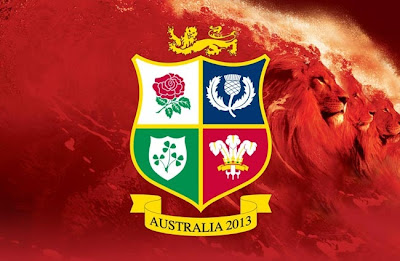 While Flower of Scotland would have been heard from Wimbledon to Glasgow and back yesterday, there were also loud renditions of it in Sydney, Australia, after the British and Irish Lions trounced the Wallabies in the third and series-deciding rugby union Test match (both teams were coached by New Zealanders!). After all, Flower of Scotland is a song which has been associated with series-winning Lions teams since 1974. More than 30,000 supporters travelled from Britain and Ireland to be Saturday's match. Among them in a crowd of 84,000 was another James Bond, Daniel Craig: 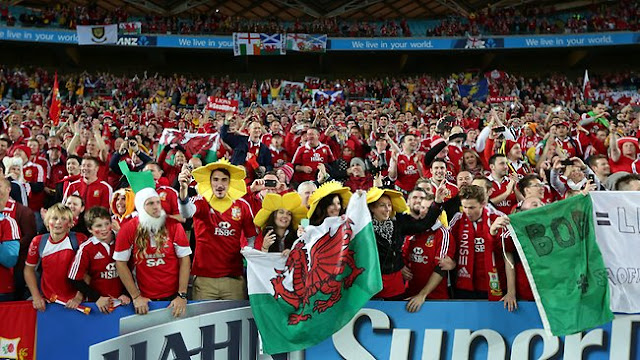 The Lions were in top form after having spent some time in beach training with the Victoria Maidens women's American football team: 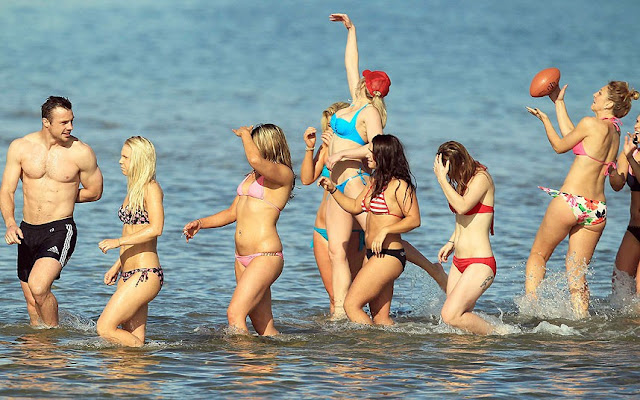 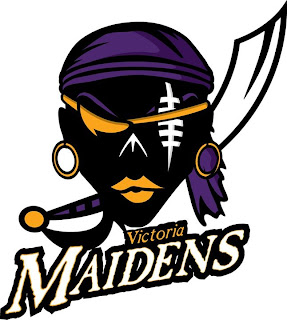 I should explain about the song Flower of Scotland. Although there is no official national anthem of Scotland, Flower of Scotland unofficially fulfils this role. It was written by Roy Williamson of the folk group The Corries in 1967 and refers to the victory of the Scots, led by Robert the Bruce, over England's Edward II at the Battle of Bannockburn in 1314. The song has been used by as a national anthem by the Scotland rugby union team ever since winger Billy Steele encouraged his team-mates to sing it on the victorious Lions tour of South Africa in 1974. The song was adopted as the anthem during the deciding match of the 1990 Five Nations Championship between Scotland and England, which Scotland won 13–7 to claim the Grand Slam. The Scottish Football Association adopted Flower of Scotland in 1997, although it was first used by it in 1993. Usually only the first and third verses are sung. The song was used as the victory anthem of Team Scotland at the Commonwealth Games in 2010, replacing Scotland the Brave. In July 2006, the Royal Scottish National Orchestra conducted an online poll in which voters could choose a national anthem from one of five candidates. Ten thousand people took part in the poll, in which Flower of Scotland came out the winner with 41 per cent of the vote compared with Scotland the Brave on 29 per cent.
Posted by Robert Messenger at 17:56

Thanks for the nice report. I love the Remington display.

My congratulations to Andy Murray and Scotland.

I do not follow any sporting event as an observer (I find just watching any of them with one exception or two becomes boring) I like participating in playing several.

All champions deserve recognition as well as the many runner-up folks. Few get to the top rankings.

Thanks for setting the stage for my trip to Scotland! We leave for Edinburgh Friday morning for 3 days.