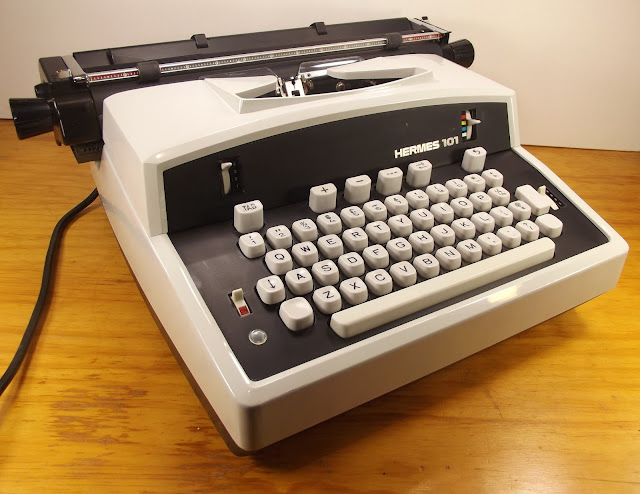 Mention of electronic and electric typewriters seems to have a way of galvanising Typospherians. My post the other day on typewriter wedges drew so many in-depth, mostly anti-electric comments that I was in half a mind not to admit to owning this Hermes 101 (a "luxury" version of the 1968 Hermes 10 Compact, below). 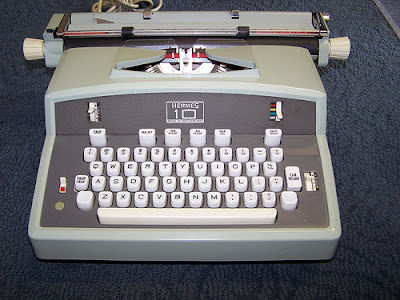 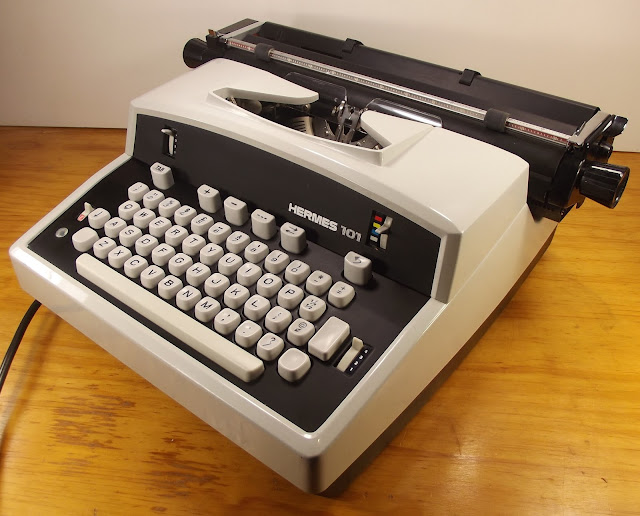 Indeed, until I uncovered the stack of wedges in a corner of my lounge, I didn't even know I owned an Hermes 101. Or, to be more precise, I had completely forgotten I owned one. I still have absolutely no idea how or when I acquired it.
As I pulled out the wedges for photographing, I noticed a very large case hidden in against the wall. Stupidly, I reached out to lift it with my bung arm. It weighed a ton. I was amazed to see what was inside it. 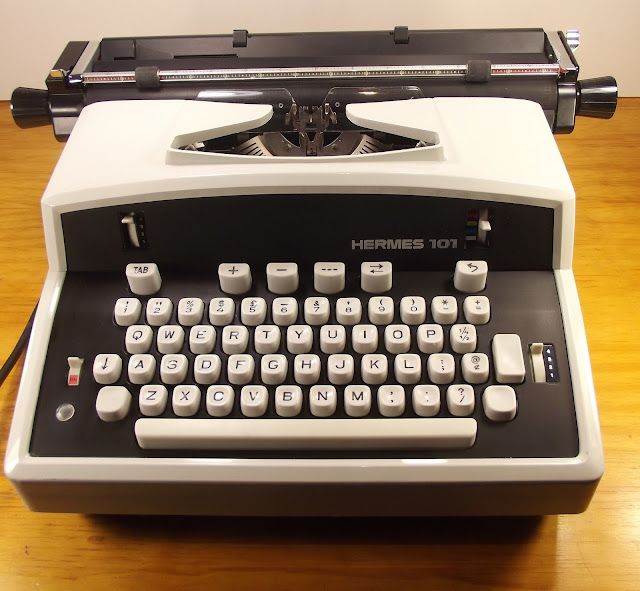 Sadly, I haven't yet managed to get it working. I can't find a way to remove the mask to check the wiring (it has an Australian three-point plug), but from I can see of it the motor coil seems OK. Maybe it's just a loose wire - if only I could get at the connections! I feel sure it will type nicely.
Finding the Hermes 101, however, was still productive, as I was motivated to dig out and scan all the latter-day Hermes typewriter literature that had been sent to me some years ago by North Queensland collector Colin Jones (author of Demise of the Typewriter), at one time a Hermes agent. Some other brochures came from Kennards of Canberra. I also came across an old Hermes 3000 ad which mentions Brisbane! 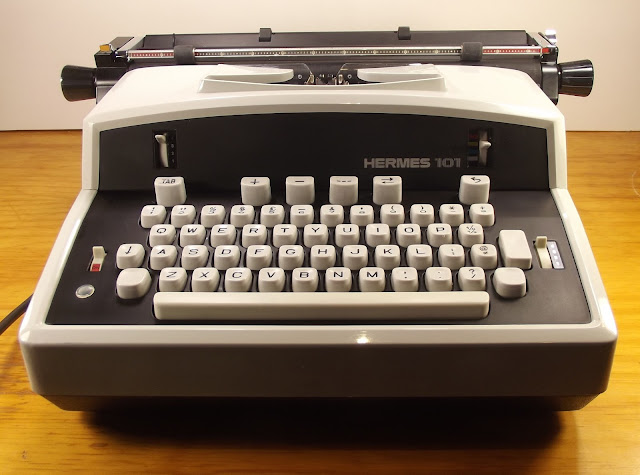 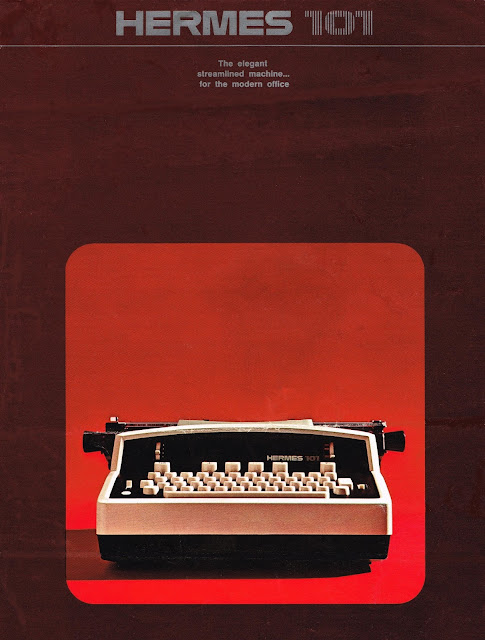 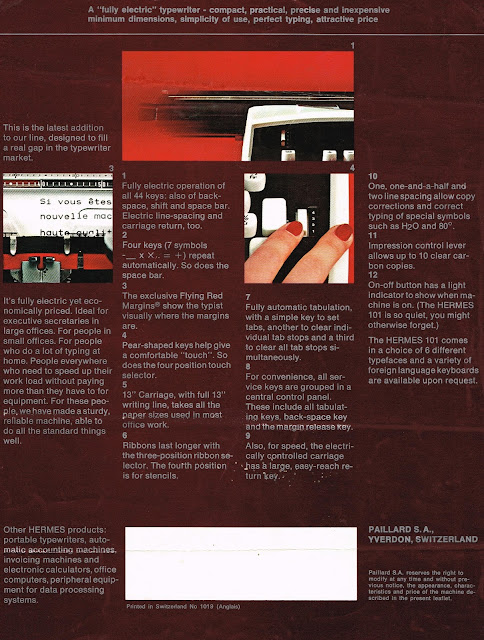 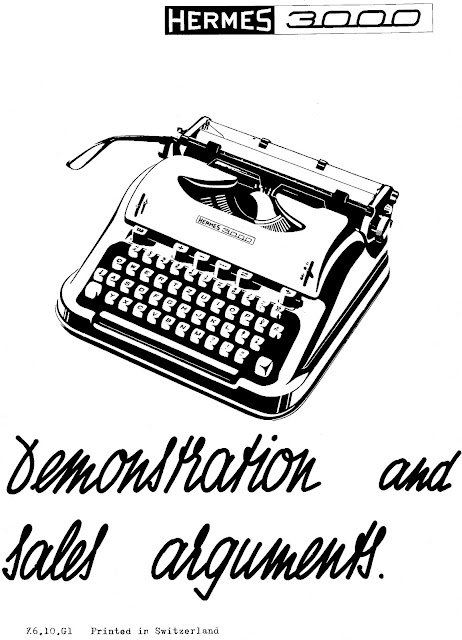 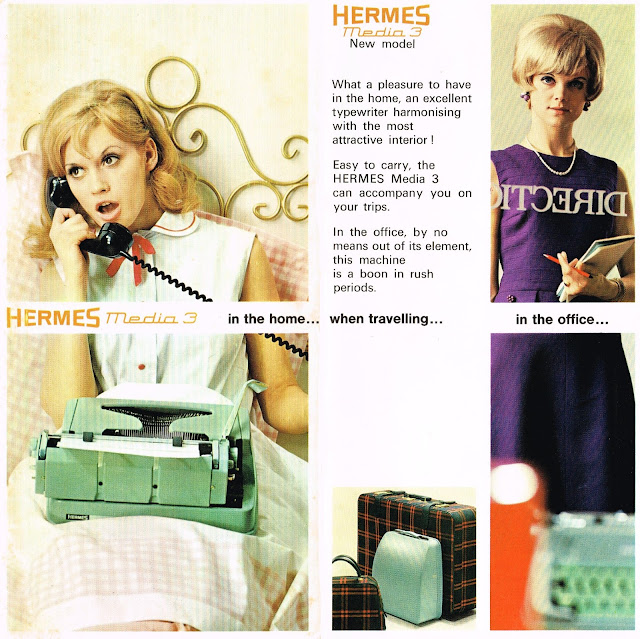 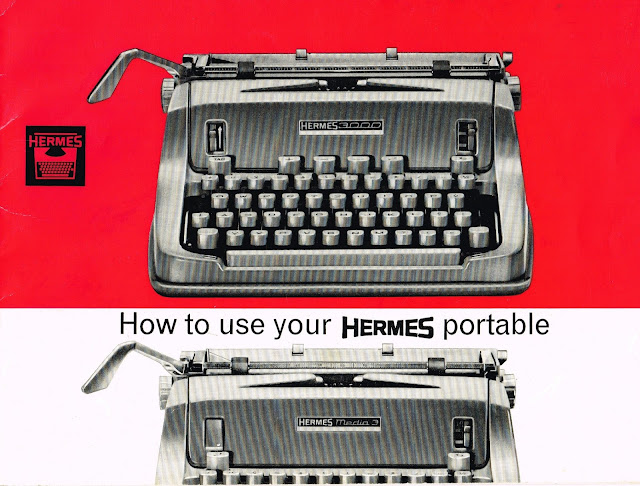 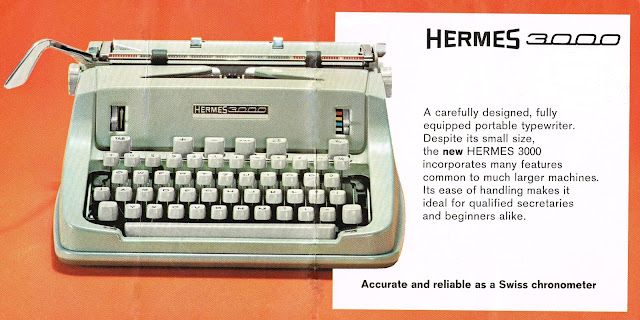 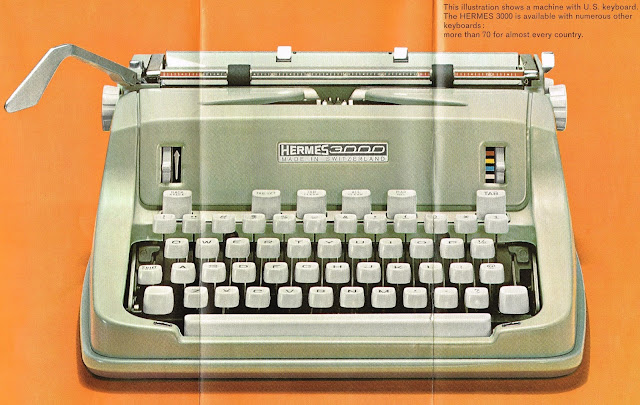 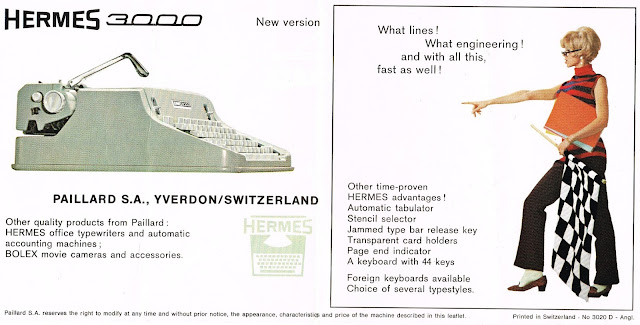 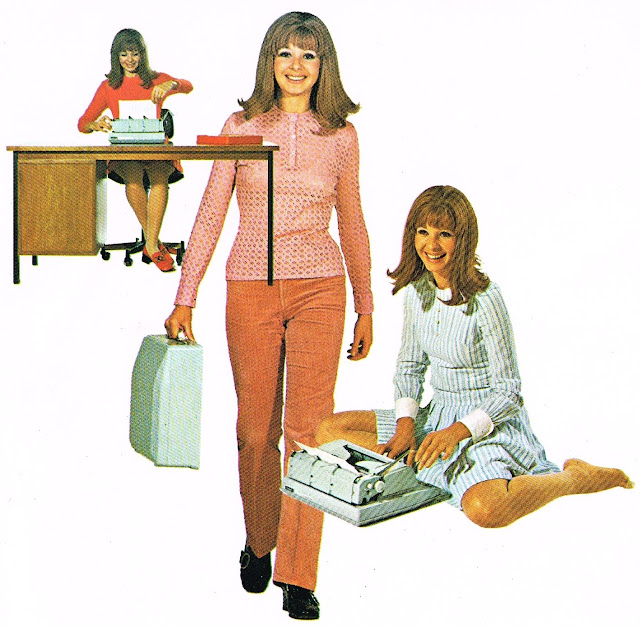 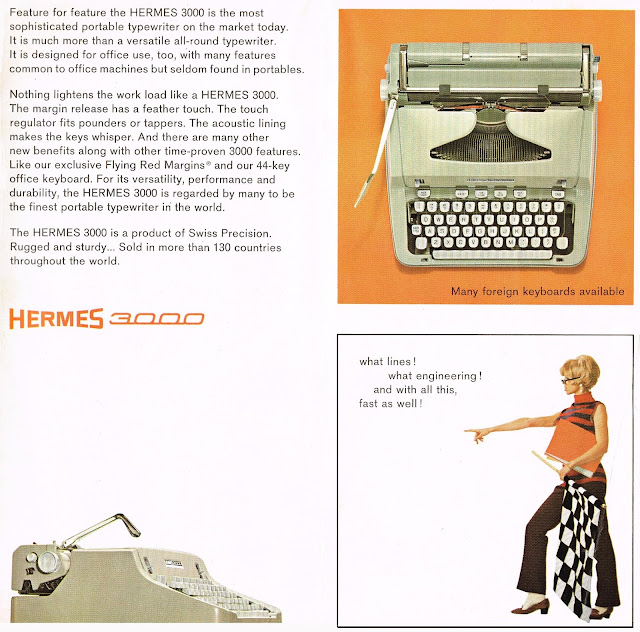 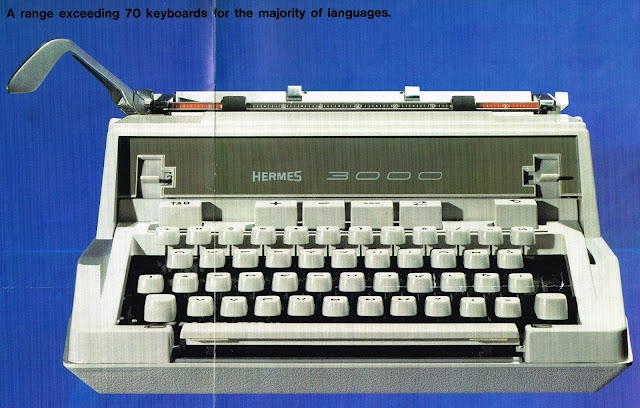 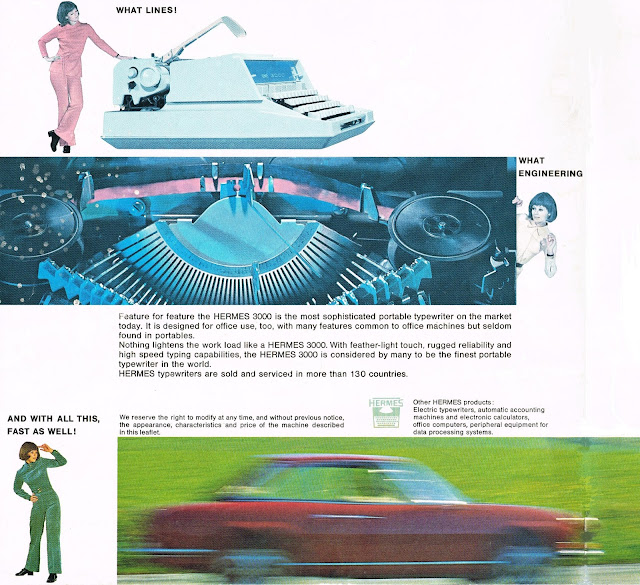 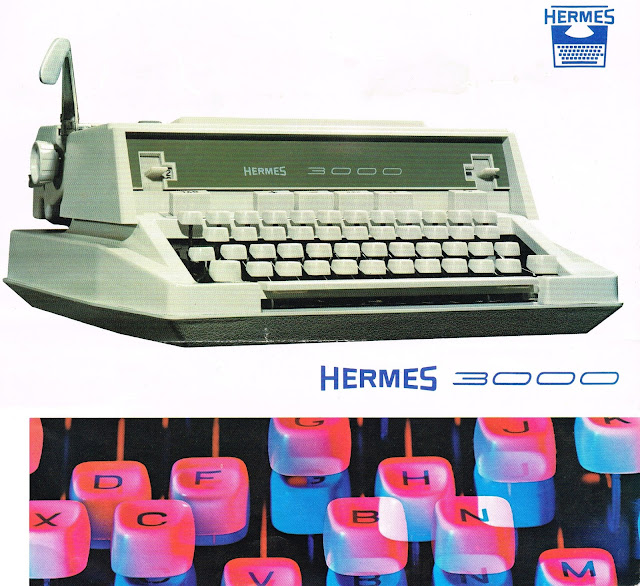 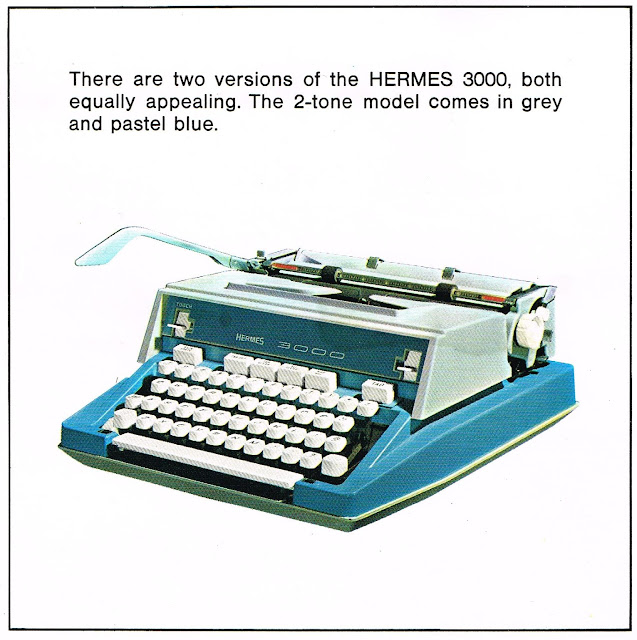 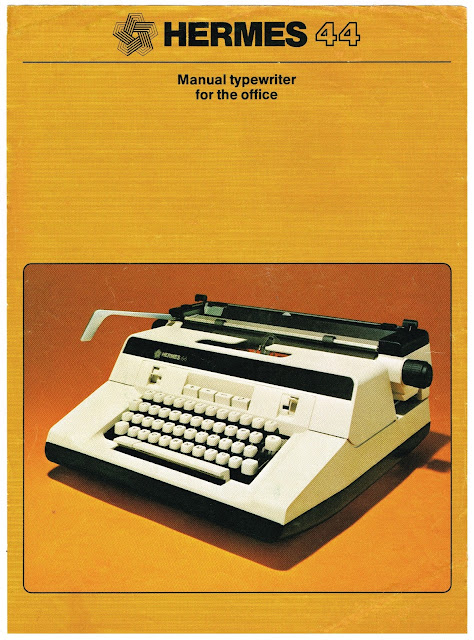 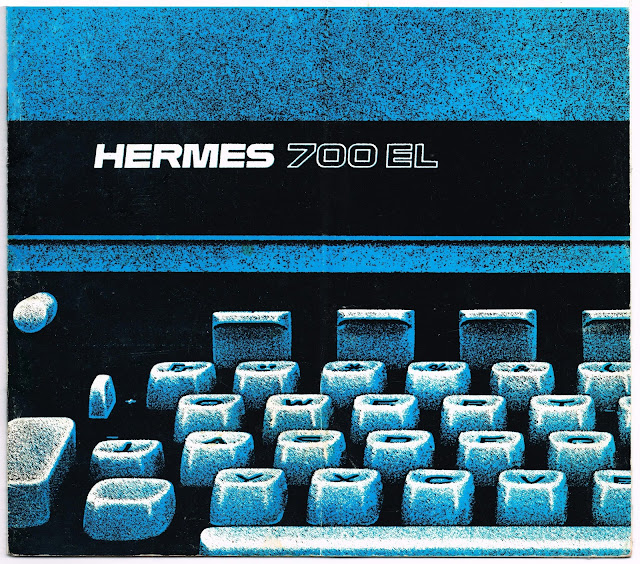 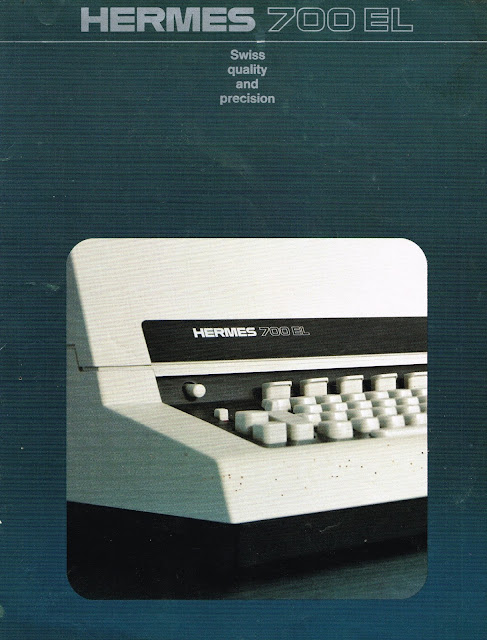 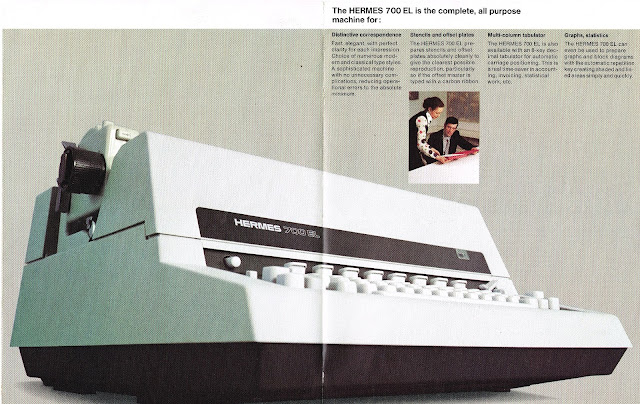 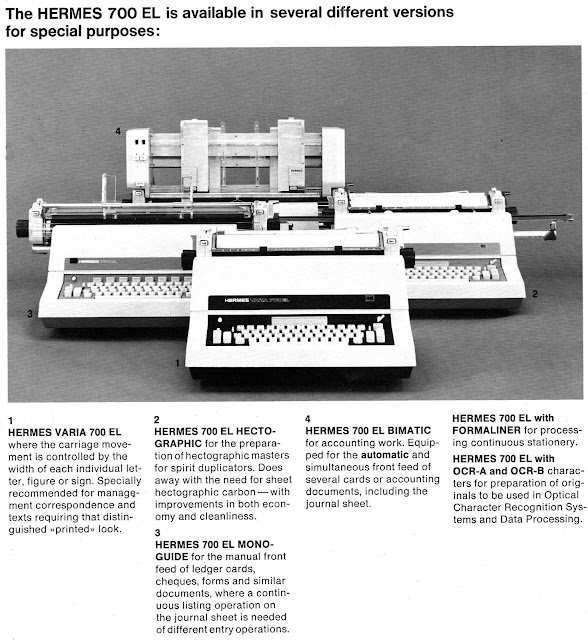 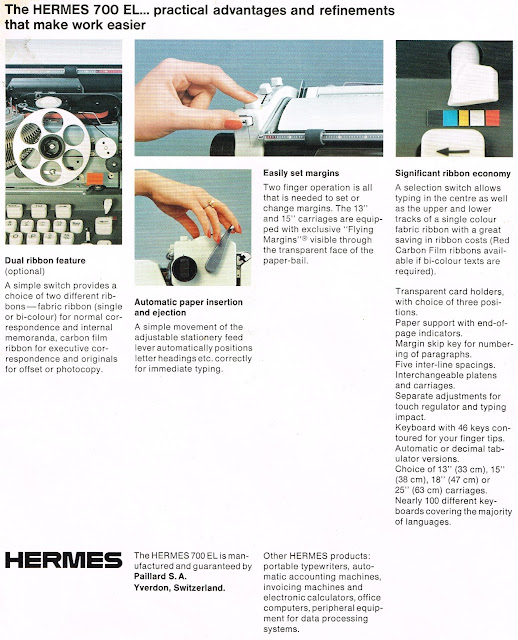 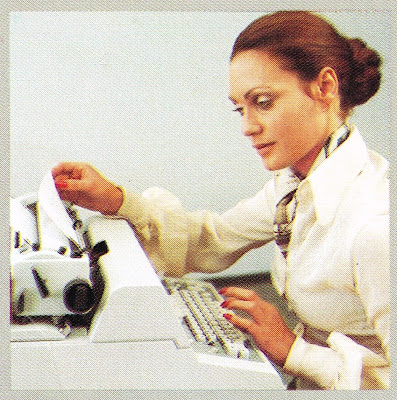 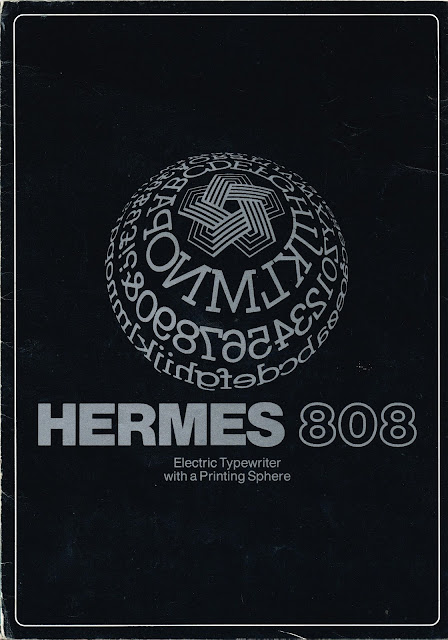 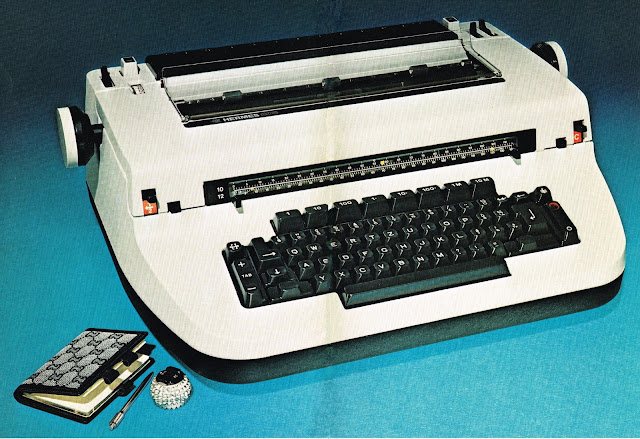 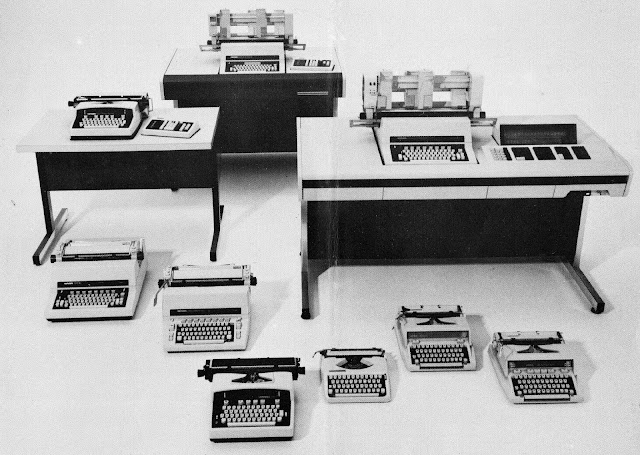 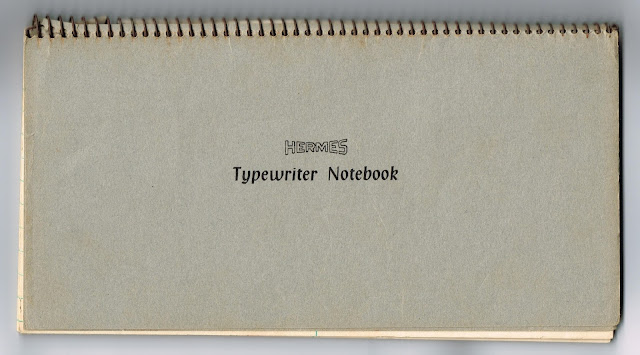 Posted by Robert Messenger at 23:39

I enjoyed the trip back in time via those ads. The layouts, hair and clothing styles, and writing styles, do something to my head that triggers pleasant memories from those past eras.

Regarding the manual vs. electric thing, my attitude is pretty much pragmatic, i.e., I have no philosophical attitude either way. I confess to owning three of the beasties - an IBM Selectric II, a pretty blue Coronamatic 7000, and an Olympia Report. On the plus side, they produce beautiful crisp type, and are unexcelled as a machine for writing - for getting words on paper without the distraction of beeps announcing the arrival of a new email message or Facebook post, etc. On the negative side they produce nice, crisp type, are heavy, and need to be plugged in.

Their crisp type falls usually into the negative column for me because I was originally drawn to return to typewriting because of its now unique appearance in communication. My typers get used for letter writing mostly to my kids and grandkids, who communicate via Facebook posts, texting, or rarely email and the occasional thank you card. I like to give them the pleasure of receiving real mail, with the unique appearance of the older typewriter fonts, with all their little quirks such as misalignment, etc. Output from an electric would not look much different from a printed MSWord document.

And yet the engineer in me appreciates their mechanical ingenuity and precision as much it does the manuals, especially the fascinating Selectric. But their bulk and the need to plug them in means they rarely get used.

I didn't want to come off as if I disliked electronic/electric typewriters - there are a few I really like (Selectric 72x's, SCM 5TE's) and most that I've encountered are perfectly serviceable writing machines, even plastic wedges. I think I slightly disagree with Prof. Polt in that they don't have souls - I lean more towards thinking that we just don't recognize their soul.

Just as many typewriter collectors in the 80's tended to think that post-war typewriters that "look like typewriters" weren't worth bothering with, it's just the prejudice of the generation. I'm certain that someday there will be a healthy community of daisywheel afficionados, and I've made strides to include that particular interest in the manufacturers list of the database, and have uploaded some of my own wedges to get the thing started :D

The Hermes ads are great fun, but what is it about these latter-day designs that is just "meh"?

After the mid-60s designs you’ve pictured, there’s either “something” missing or something that is there that fails to evoke any feeling for the object.

It surely wasn’t Marcello Nizzoli (the Olivetti 22) or Carl Sundberg (Remington portables)or Anton Demmel (Olympias of the 50s and 60s).

Yet it is not as though the 70s was a void in good industrial design (think, say, Giorgetto Giugiaro, who designed the stainless steel Delorean).

But the late Hermes? Eh!

I've been pondering this since your last post too and thanks for this too, it is a pot that needs to be stirred! I've decided that it's the wedges that I don't like rather than electrics in general. I bought an IBM Selectric earlier this year and was sad not to be able to get it going. I think they look fabulous (in a bloated ice-cream van sort of way), as do plenty of other electrics, Praxis 48, Hermes Ambassador etc. However all these had their own distinct styling and identity I think wedges, even in the distant future, will still be regarded the same way as today's Windows laptops will be. That is to say cool and vintage, yes, but also ubiquitous and less interesting than older typewriters or newer cooler looking things like iMacs or Powerbooks.

I have a Hungarian-made Hermes 44 in red which looks nice. The mechanics looks to be a fine one (however, it's a plastic one). Unfortunately I can't remove the cover which makes impossible to clean the machine.

Good luck getting the 101 running. This collection of advertising is great!

What a nice elephant ride! And valuable details on the Hermes 700 line. These you don't see so often, even in Switzerland.
I hope you will get your machine up and going, you will not be disappointed. For those not digging electric typewriters, I recommend to listen to the sound of a Mercedes Elektra (just in case you don't have your Blick electric at hand).

Thank you Tony, Ted, John, Steve, Szabolcs, Dwayne and Georg for your very interesting range of comments.
Georg, do you want these Hermes brochures? Do you want me to post them to you?

I used to be a typewriter mechanic back in the mid 70's well remember repairing the Hermes range and worked on Ambassador and the 808, the 808 was the stuff nightmares were made of, a thing called the cycle clutch was always wearing out and was a long job to replace. still the Hermes machines were my favourite great memories seing this site.

Personally, I wish that IBM had made an electronic typewriter that could use both Selectric Composer elements and 88-character typewriter elements, including the elements for the Mag Card Executive.

Unfortunately, certain other extensions that I would also like would be impractical, as the characters in some of the typestyles for the typebar Executive typewriter were too wide to fit on a Selectric element.