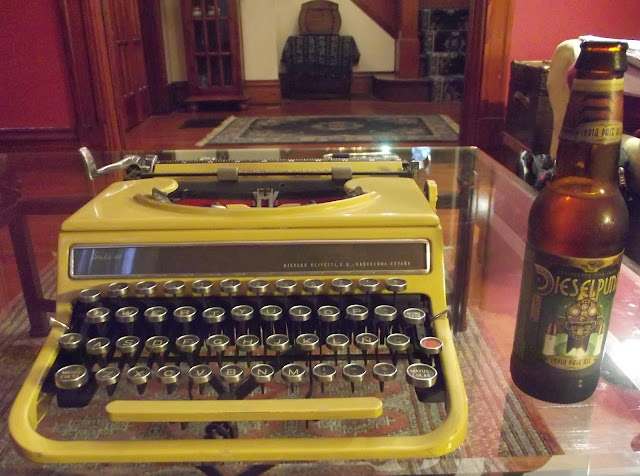 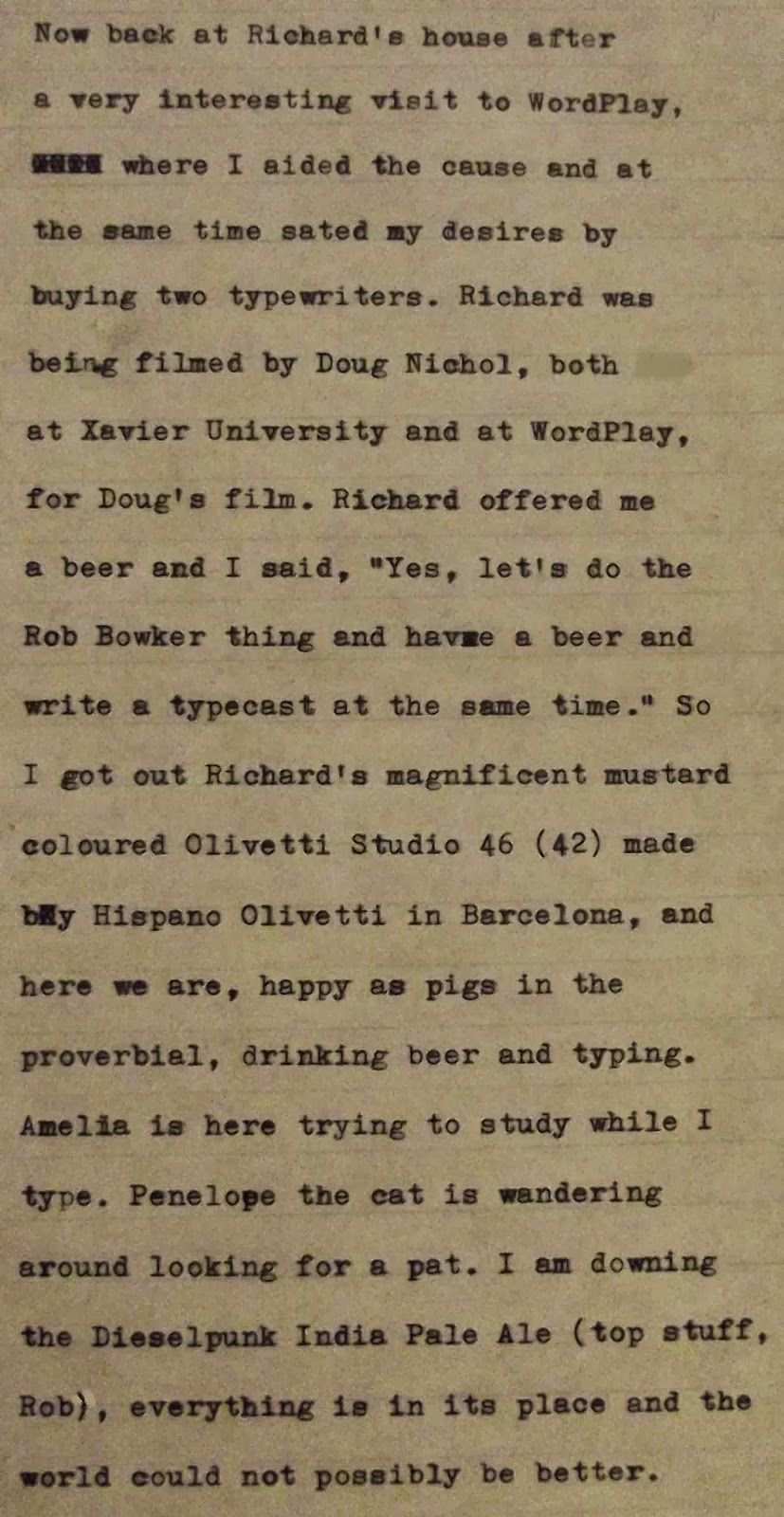 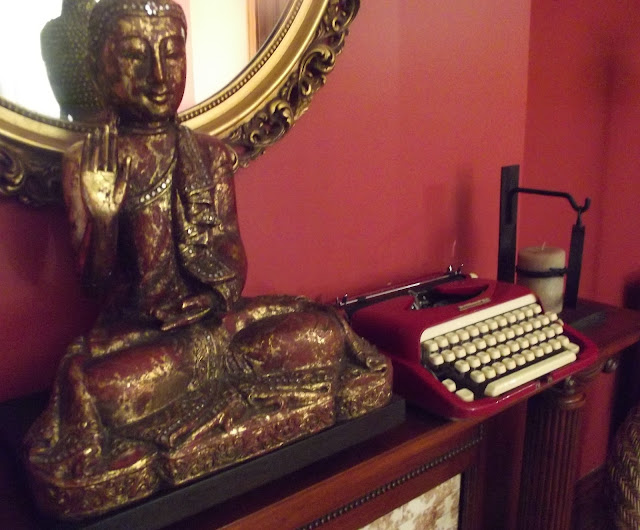 I felt very honoured to be invited into Richard Polt's home several times during my stay in Cincinnati (which ends today). Richard allowed me to use and photograph many of his wonderful collection of typewriters - both in his office and at home. The home collection is an amazing array of often very rare and highly unusual machines. Most of the photos I have taken are of typewriters in Richard's study, but there are others in the dining room and lounge, and many more that I didn't photograph, in both the attic and basement. I was delighted that a Brilliant S (ABC, seen above) which I brought over from Australia for Richard has, at least for the time being, taken pride of place on the mantelpiece in his lounge room. 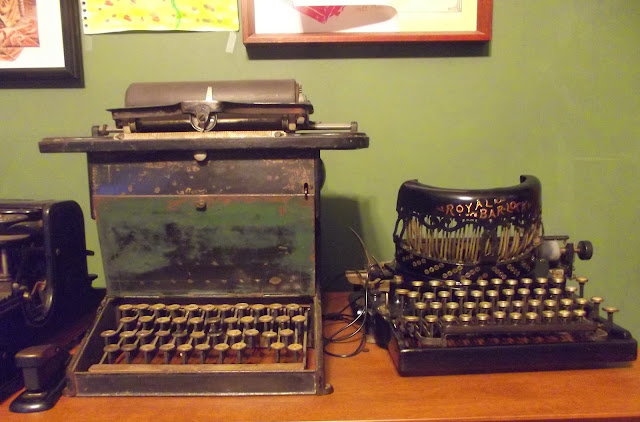 Sholes & Glidden and Royal Bar-Lock with conventional keyboard and shift 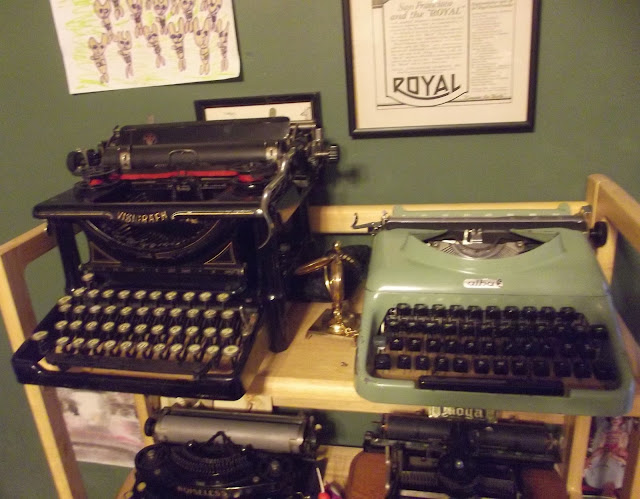 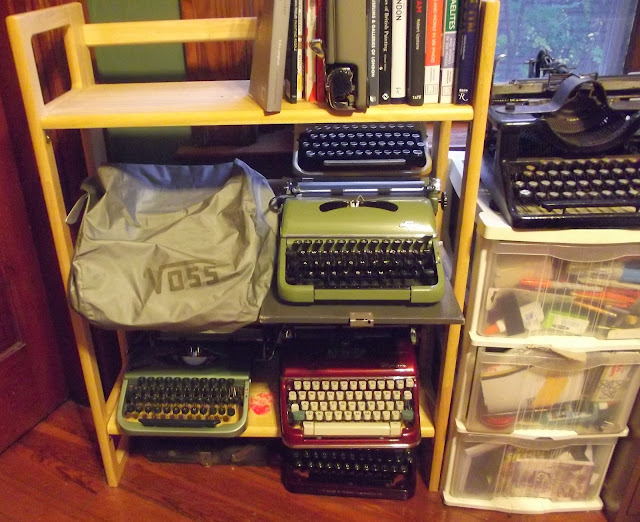 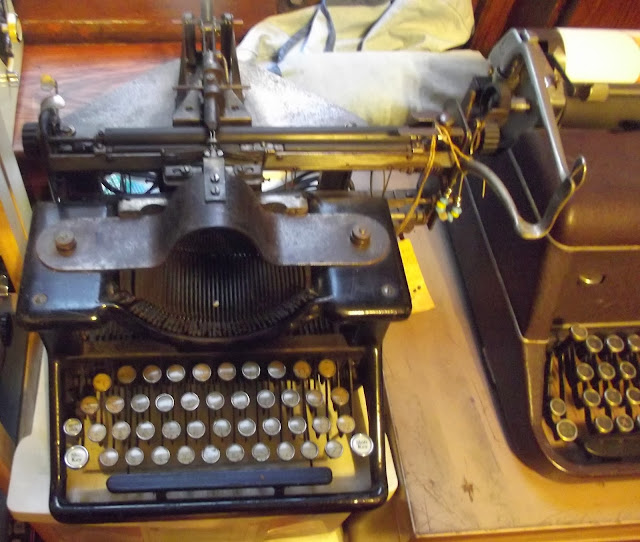 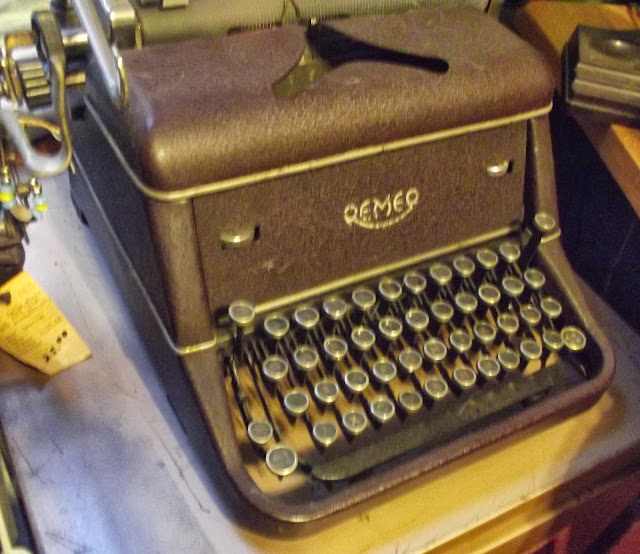 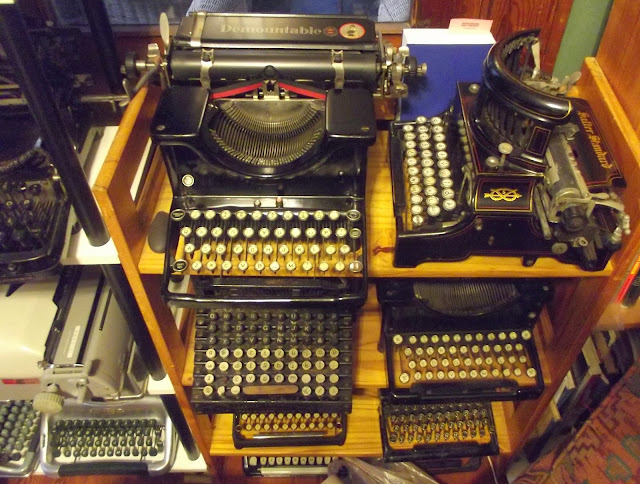 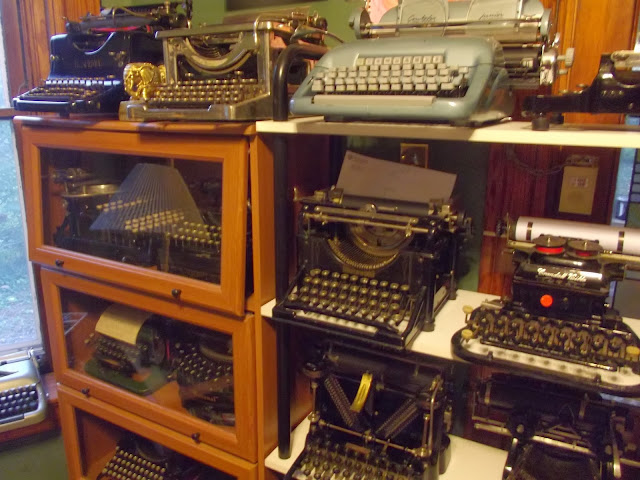 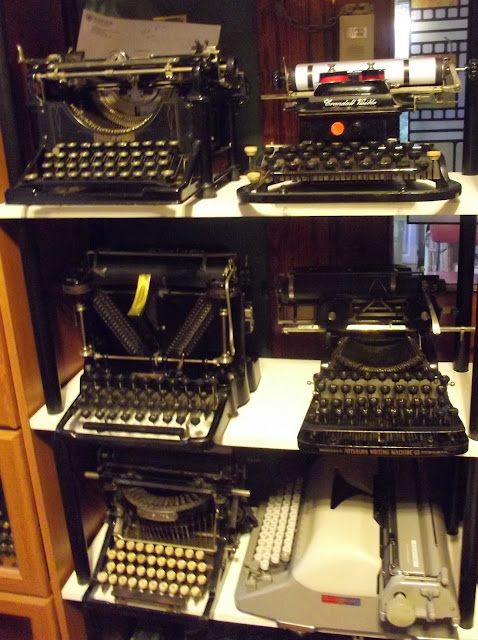 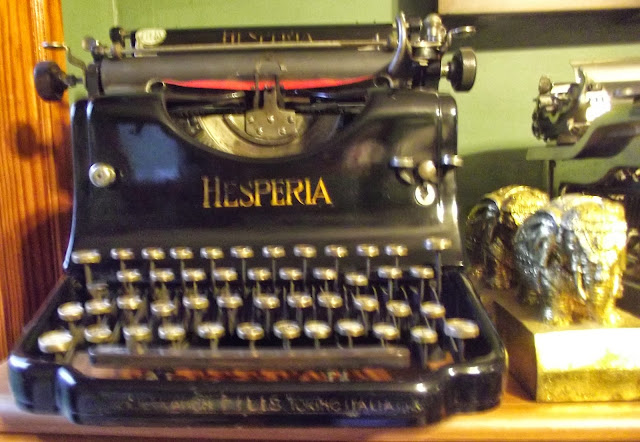 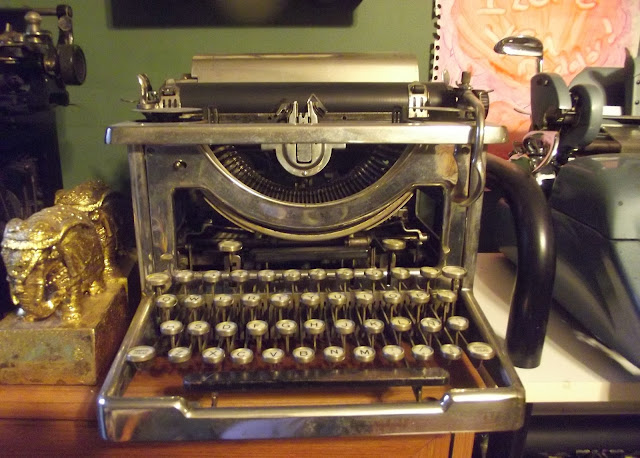 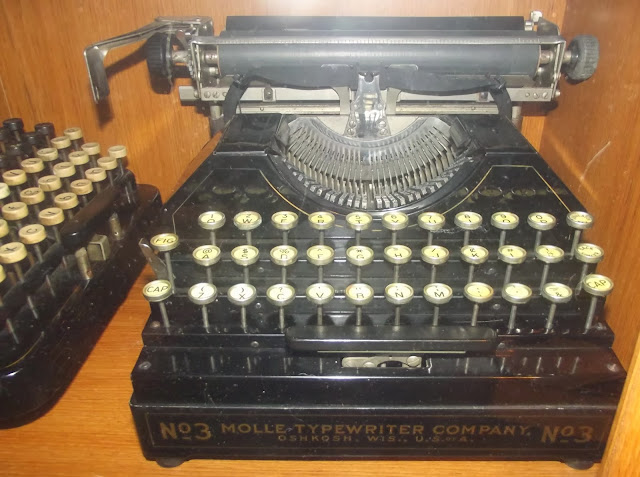 On the left is an Imperial Model A, under an instruction sheet I sent Richard for his National (right). 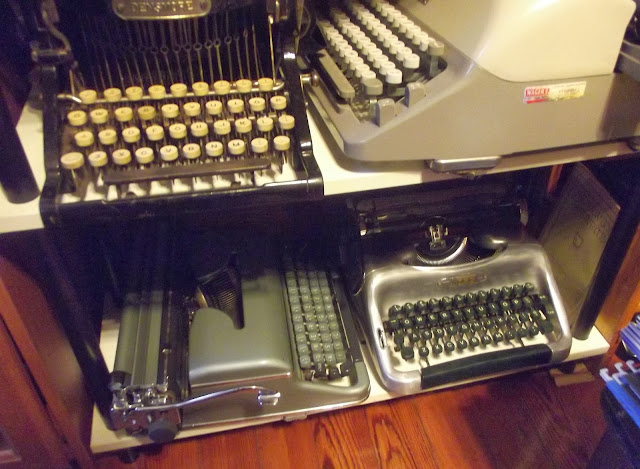 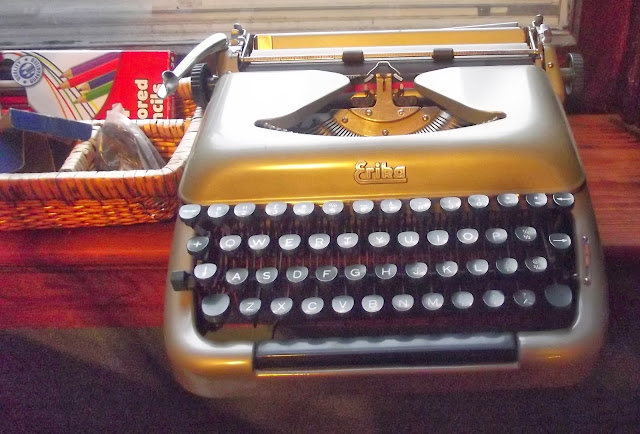 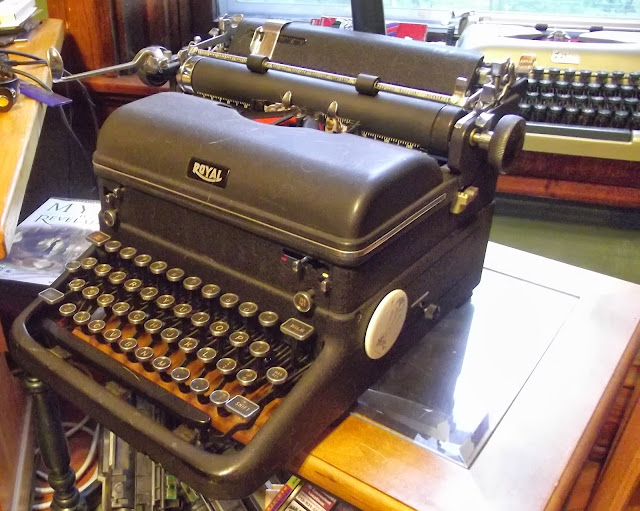 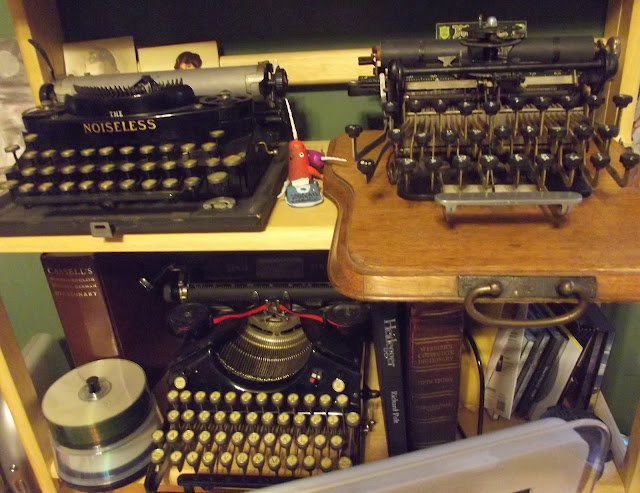 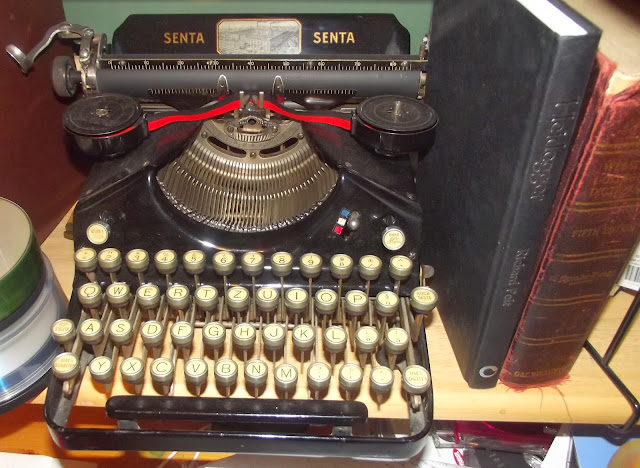 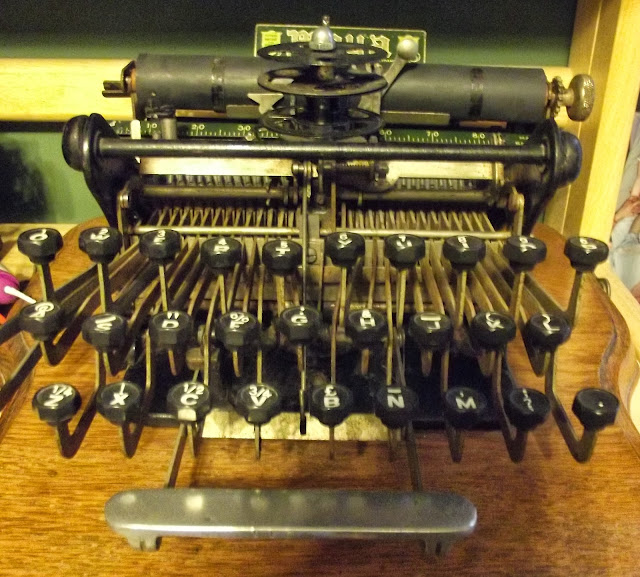 I was able to help Richard acquire this Moya from Timaru in New Zealand a few years back. 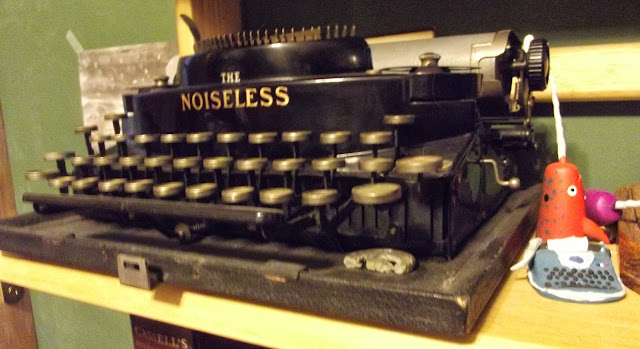 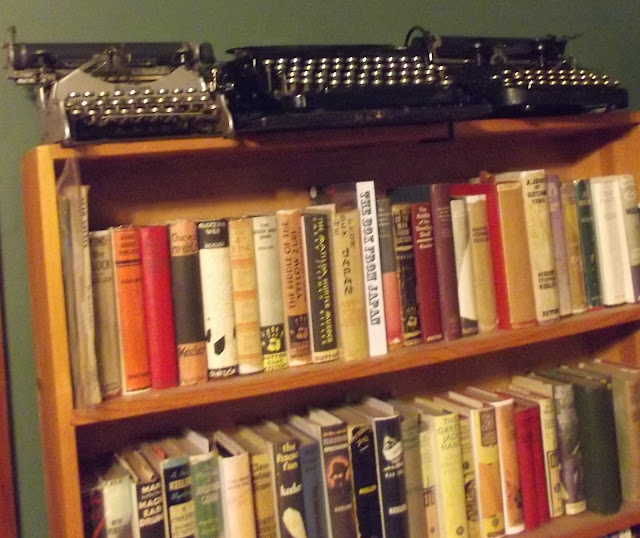 Top right is a Blick Ninety I gave Richard. I believe it has found a far better home here than I could have given it. It used to belong to the late Les Owen's Typewriter Museum in Salford, England. 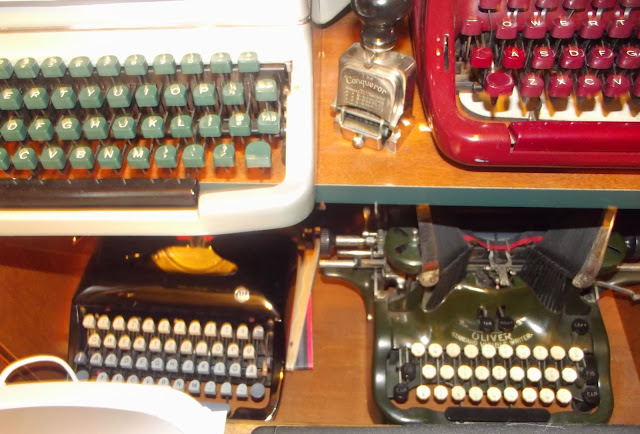 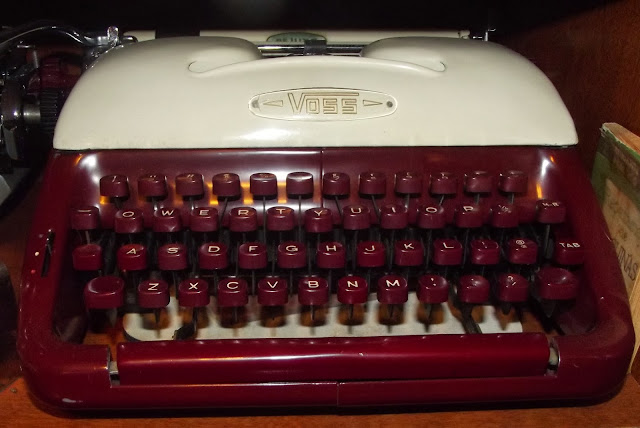 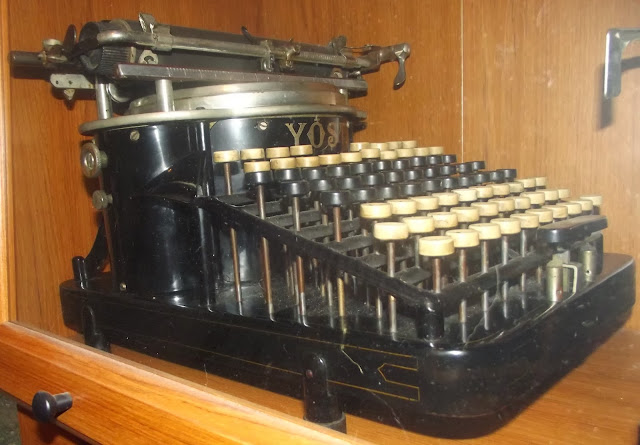 Posted by Robert Messenger at 23:23

Richard has done a much better job than I of fitting typewriters in among books and other mementos of a former century. I've taken a couple of lessons here. I'm looking at my Burgermeister Beer neon sign - if I hung it from the ceiling i could fit two typers and a foot or more of books in its space...

Wonderful eye candy! Good-looking machines and curiosities both. I enjoyed the photos of the book shelves too. One can't help but peer at the titles :)

Eye candy, indeed! I'm with Tony here, I'll have to reorganize my book shelves to mix typewriters, books and records...

... Something tells me you and Richard might be starting a new typospherian trend... "Typewriter decor"

Glad to read you had a wonderful time! Now have a safe trip back home. And thank you again for your wonderful travelogs! It felt almost like being there.

I'm moved to open a second bottle. Steampunk IPA sounds fabulous but I'll have to settle for London Pride. Cheers Robert, I hope you had a memorable time and glad you found such a warm welcome - he's a nice chap.

I've read with great pleasure your posts from the last days in the USA. Not only because of the many photos of both the Polt as the Price collection, but mainly because it is fun to see you having the time of your life there. Enjoy the last part of it!

Many thanks for this faithful documentation of your trip and the amazing machines and people encountered along the way, keep up the great work!

I am enjoying all the blog posts re your adventures to the typewriters 'heaven'. you are creating many new wants/wish list for sure. ;)