Odyssey to Ohio: The Greatest Typewriter Trip, Ever

It was pointless trying to make any further, completely futile attempt to sleep. The excitement was far, far too great. So after three hours of tossing and turning in the dark, I got up and showered and changed into my travel gear.
The Odyssey had officially begun. There was now no turning back.
At 4.30, my son Danny drove me into the Jolimont Centre in Civic and at precisely 5am the Murrays Bus pulled out on to Northbourne Avenue in downtown Canberra. There were just 7777 miles left to reach Los Angeles, as the coach and Delta Airlines crow fly. I was finally on my way, as ready as I would ever be.
A calmness had at last started to creep over me, and those milling thoughts of the adventure that lay ahead couldn’t stop me nodding off by Watson. Thirty-five minutes down the Federal Highway, however, I was jolted awake, startled by the sound of screeching brakes. I looked up to see the bus skewing, almost now sideways, towards the ditch and high embankment on the left side of the road. As always in traffic scares like this, time went rapidly into slo-mo, allowing too ample an opportunity for all the worst of notions to course through my head: Would the bus stop before it hit the solid earth wall? Would I survive the crash in this darkness? Would I ever make it to Ohio in one piece? More importantly, would the typewriters in my case be OK? Perhaps Danny could post them on to Richard Polt, once salvaged from the wreckage, along with my decaying bones.
The woman beside me looked back in wide-eyed fright at her friend in the seats behind us. “Kangaroo,” the friend said. One more road kill, not enough to end this pilgrim’s progress.
The bus crawled through peak hour traffic in Sydney, inching toward the airport. But we reached Mascot with still an hour or so to spare. Anne at the Delta check-in desk said, “You’re three kilos over. One would be OK, but three! Is there anything you can take out? What’s in there?”
“Typewriters,” I said, pointing proudly to my chest, emblazoned with the sweater artwork promoting Herman Price’s sixth annual Typewriter Collectors’ Gathering at the Chestnut Ridge Typewriter Museum in Fairmont, West Virginia. “And I’ll be coming home empty-handed.”
“OK,” she said, strapping a large, bright red “Heavy Baggage” label to my suitcase handle.
After the kangaroo scare at Eaglehawk 25 miles outside Canberra, by now already a distant, fading memory, the signs for a successful trip were starting to look very, very good indeed. The pre-flight safety video shown on board the Delta Airline plane featured – yes, you guessed it, a portable manual typewriter! It was a little Czech Consul, and the clip showed one how to stow it under an economy-class passenger seat.
Fortunately, the previous day the latest HBw-Aktuell had arrived from Peter Muckermann in Germany, so with Richard Polt’s English-language summary, I had plenty of good reading material for the flight to LA. It was a reminder, too, that I would be covering the Chestnut Ridge gathering for Peter’s magazine.
The Delta jet was pushed by tail winds right across the Pacific and on through the International Dateline and seven hour-wide time zones, so we landed in Los Angeles at 6am, 45 minutes early and 20 hours “before” I had left Sydney. We had flown from Australia at 10.45am on Thursday, October 11, 2013, landing in LA that very same morning. Yet the 7500-mile flight had taken 13 hours, setting me up nicely to win Herman Price’s “longest journey to reach Chestnut Ridge” prize.
The only immediate problem was that United States customs workers don’t clock on until 6.30, so we sat in the plane for half an hour waiting for them to receive us. I figured I still had a ton of time to clear border control and customs and catch my onward flights.
At the border control desk the young man asked, “What’s with the typewriters?” Again I thumped my chest. “Gifts for dear friends,” I declared, in all honestly. “Thank yous to people who have been extremely helpful to me over the years. A little plastic, latter-day Neckermann Brilliant S for Professor Polt and a little old Corona 3 for Professor Weil.”
“They still use them?” the young man asked.
“Sure do,” I replied. “Love them!”
“Okay,” said the official. “Have a great gathering [you crazy bastard you].” 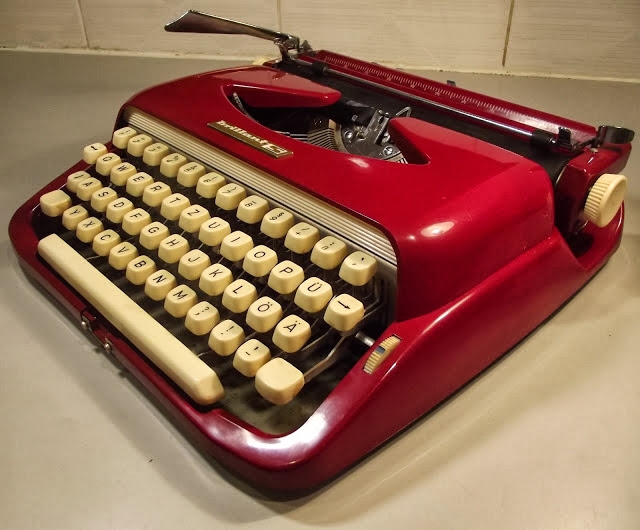 From there it was on to Kansas City and then Cincinnati, crossing three more time zones on the way. So it was 7pm when I reached Ohio (well, strictly speaking, North Kentucky). Richard Polt had emailed ahead. “Keep following the signs to baggage claim,” he wrote, “and you’ll find me.” I knew I would. He had, happily, warned me he was six feet seven tall. And sure enough, from 30 yards ahead of me, to my left, a tall man sprung to his feet and waved. How often, I wondered, does one receive such a warm, friendly greeting from one of the greatest heroes in one’s life?
Richard drove me to his home, where I met his charming wife Julia and daughter Amelia. We sat around, downing a couple of beers and chewing the fat on ancient global maps, boat people, the ills of Facebook and other world woes. Oh, and there was some talk of typewriters, too.
The next morning, while Richard took Amelia to school and got ready to go to Xavier University, I had the chance to have a close look at his incredible collection of typewriters, in his study and also downstairs in the basement, where there was a little gold mine of machines, all waiting for Richard’s attention – and many of them destined for sale on behalf of WordPlay. 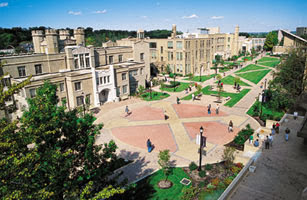 I went with Richard to his office at Xavier. There I had, to my utter delight, my first reaching-distance look at the very typewriters I have been coveting from images on Richard's The Classic Typewriter Page for at least a decade or more. I must stress reaching-distance, because while Richard encouraged me to take them down from their shelves and type with them, I sensed an overwhelming fear of being an Alice in Wonderland, and that at any moment a Mad Hatter would jump from the typebasket of a Crandall and it would all end in a sea of tears if not heartbreak. Coveted, did I say? I was a bull virgin in a Bunny Club!
With Richard's breathtaking collection of typewriters safely locked away, I sat in on two of his fascinating lectures, first on Plato’s The Republic and then on Pascal’s  Pensées. Richard included me in the handout of questionnaires. “Why aren’t ‘metaphysical proofs of God’ enough?” (pp 55-56). It took me a full day to find the answer, and it came in the shape of a Masspro portable typewriter in Fairmont. But more of that later. By mid-afternoon we were on our way to West Virginia, with plenty of other things to catch up on. 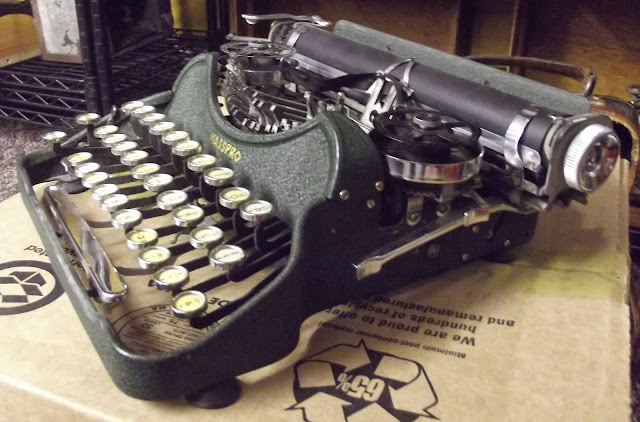 At Clarksburg Richard spotted what looked like a good place for dinner. But as he reached for the door of the restaurant, from the darkness to our left a giant, mechanical tarantula pounced, its red eyes glowing. It was just as well Richard only jumped two feet in the air, as at six feet seven, he might otherwise have bumped his head on the ceiling beam, as if he'd bitten into Alice's "Eat Me" cake. As it was, the tarantula attack did little to settle our digestive systems.
By 9pm we had navigated our way through the black autumnal forest of Fairmont and found the Chestnut Ridge Typewriter Museum - with, over the last mile, the help of Herman Price's "Typers" signs. I felt a pinch of trepidation as I walked inside. From unlit places outside the house, and from stairwells leading down to deep treasure troves of typewriters, one by one emerged the embodiments of all the other great men I have so admired so much for so very long: Herman Price, Will Davis, Peter Weil, Paul Robert, Martin Howard, Alan Seaver, Mike Brown. They seemed able to recognise me. Their faces beamed, they held out such welcoming hands, they said such kind, wonderful things. I was being embraced by the masters. They wanted to make me feel that I was one of them. There were even moments when I felt tempted to believe that that was possibly so.
Richard had begun to worry that, after two days of such arduous travel, the strain would start to show and I would begin to wilt. But the adrenalin was pumping. So many people to meet, so many typewriters to see. So much typewriter talk to exchange. The first night of the gathering flowed on into in the wee small hours of the second morning. I felt that, even after Richard and I had reached our hotel in Morgantown, I would still not be able to sleep. Did such excitement know any bounds?


NEXT – Day Two: The Presentations, the Awards and the Competitions. And the Chestnut Ridge museum typewriters!
Posted by Robert Messenger at 06:01

Welcome to the States; may you enjoy your visit! (As you already seem to be.)

Lovely write up. I'm looking forward to seeing much more!

Very glad you enjoyed your visit. Thank you for such a detailed post of your adventures.

You must be exhausted! But it looks like it was a great weekend. Thank you for this fantastic journal, and welcome to our side of the world!

It's so important that this whole event is being preserved in posts by a professional journalist. Thanks so much! I can't even remember all the details, and I was there! -Will Davis